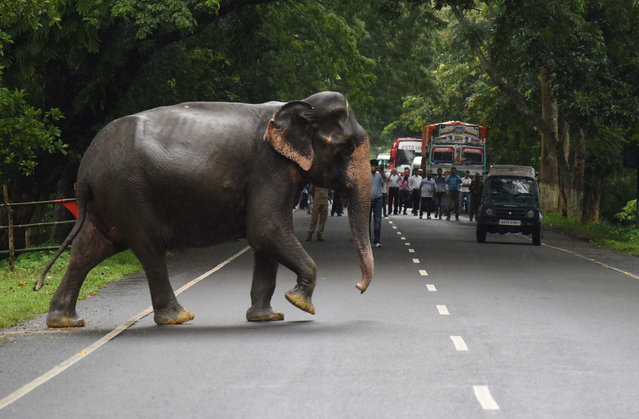 Commuters watch a wild elephant cross a highway as it tries to escape to higher ground at flood affected Kaziranga National Park on July 10, 2017 in Assam, India. (Photo by Anuwar Hazarika/Barcroft Images) 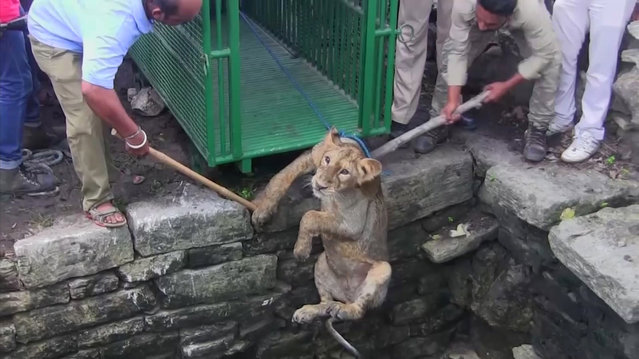 A two-year-old Asiatic lion cub is rescued from a well in the village of Amrapur western Indian on Saturday July 8, 2017 in this image taken video . The village is located about a hundred miles north of Gir National Park, the world's last refuge for wild Asiatic lions. (Photo by KK Productions via AP Photo) 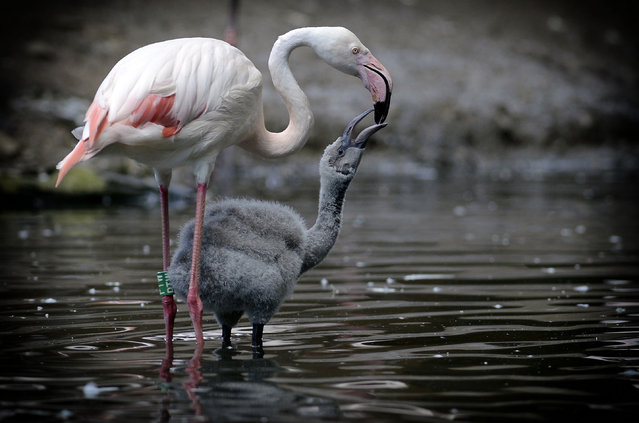 A flamingo with its chick at Jihlava zoo, in the Czech Republic on July 13, 2017. (Photo by Slavek Ruta/Rex Features/Shutterstock) 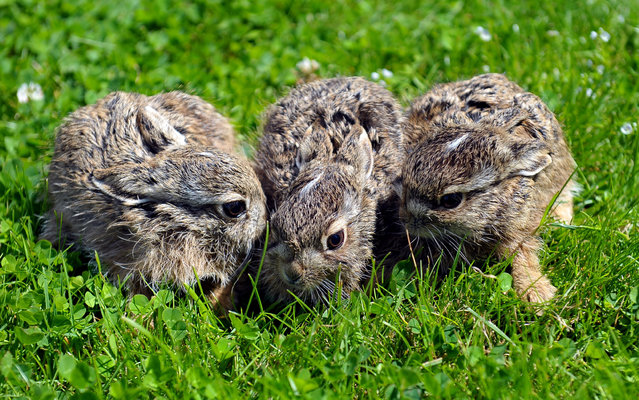 Baby hares sit on a field at the Dzika Ostoja Animal Foundation in Szczecin, Poland, 09 July 2017. Four leverets were found in a trash bag and will be bottle-fed for five weeks before being released again. (Photo by Marcin Bielecki/EPA) 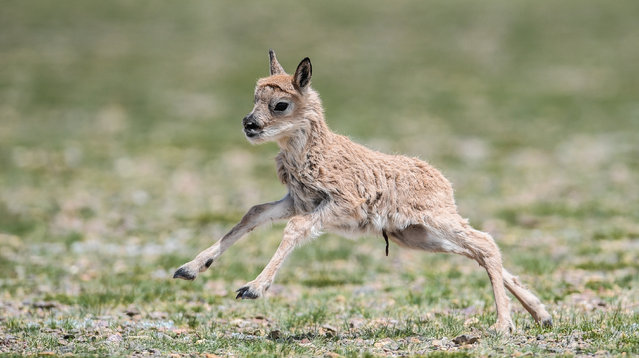 A Tibetan antelope lamb runs at Changtang National Nature Reserve in southwest China's Tibet Autonomous Region, June 24, 2017. It is breeding season of Tibetan antelopes at Changtang. There are over 3,000 ewes awaiting delivery or just delivered simply at the reserve in Qiuka region of Xainza County. The total number of Tibetan antelopes has risen to more than 200,000 at Changtang. With an area of 298,000 square km and an average altitude of 5,000 meters, Changtang is China's biggest and highest reserve. The area is located in northern Tibet where few humans reside, however, it is a wildlife paradise, and home to a variety of wildlife species and numerous lakes. More than 40 species of rare wild animals including Tibetan antelopes, Tibetan wild donkeys, Tibetan yaks and black-necked cranes living in the region. (Photo by Purbu Zhaxi/Xinhua/Barcroft Images) Chinese panda Ai Bao eats a bamboo sprout, leaning on a birthday cake made with bamboo sticks in a celebration for her fourth birthday on July 13, at the Everland amusement park in Yongin, South Korea, Wednesday, July 12, 2017. A pair of giant pandas arrived in South Korea on March 3, 2016, following an agenda about panda research cooperation in a meeting between Chinese President Xi Jinping and former South Korean President Park Geun-hye in 2014. (Photo by Ahn Young-joon/AP Photo) 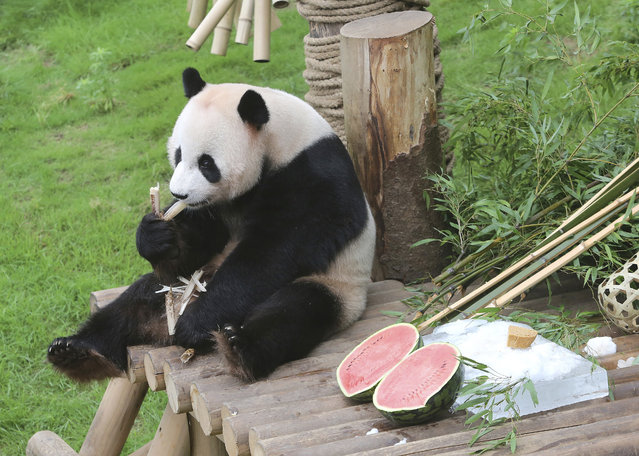 Chinese panda Le Bao eats a bamboo sprout in a celebration for his fifth birthday on July 28, at the Everland amusement park in Yongin, South Korea, Wednesday, July 12, 2017. (Photo by Ahn Young-joon/AP Photo) 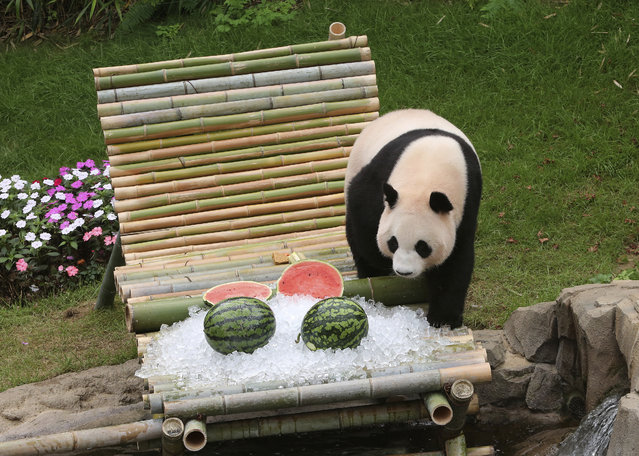 Chinese panda Ai Bao approaches watermelons presented to her in a celebration for her fourth birthday on July 13, at the Everland amusement park in Yongin, South Korea, Wednesday, July 12, 2017. (Photo by Ahn Young-joon/AP Photo) 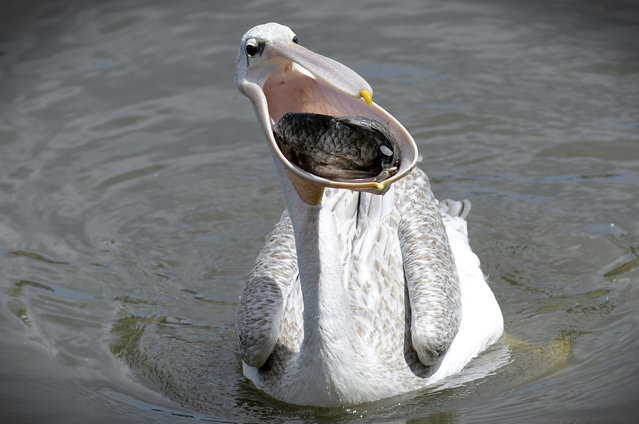 A great white pelican eats a fish at Dvůr Králové zoo in the Czech Republic on July 11, 2017. (Photo by Slavek Ruta/Rex Features/Shutterstock) 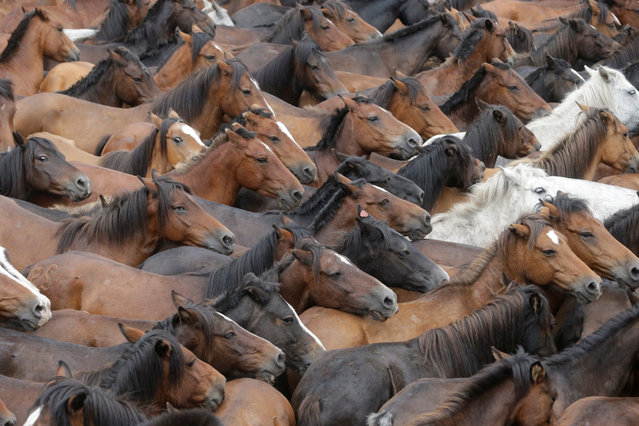 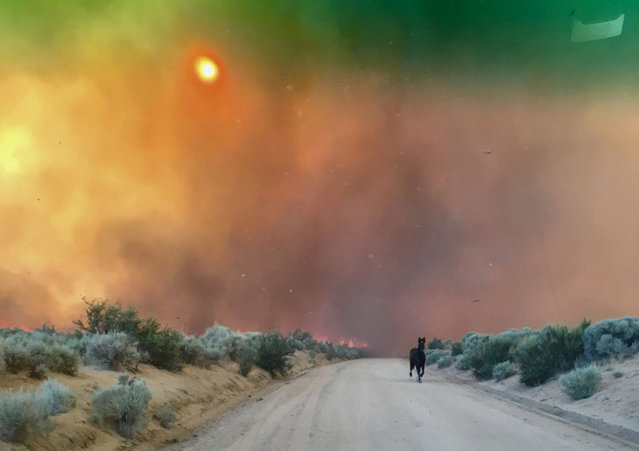 A horse runs from burning grasslands of the Long Valley fire near Doyle, California on July 14, 2017. (Photo by Lassen County Sheriff's Office/Reuters) 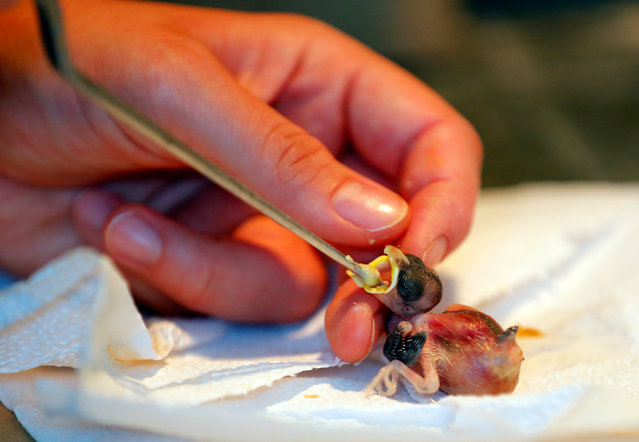 A sparrow is being fed at a hospital for wild birds in Hortobagy National Park, Hungary June 27, 2017. (Photo by Laszlo Balogh/Reuters) 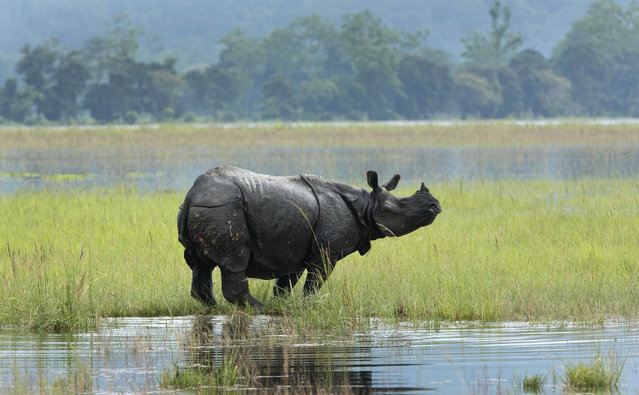 In this Saturday, July 8, 2017, photo, a One horned Rhinos wades through flooded Kaziranga national park in Kaziranga, 250 kilometers (156 miles) east of Gauhati, India. Police are patrolling for poachers as rhinoceros, deer and buffalo move to higher ground to escape floods inundating an Indian preserve. Kaziranga National Park has the world's largest population of the one-horned rhinoceros and is home to many other wildlife. (Photo by Anupam Nath/AP Photo) 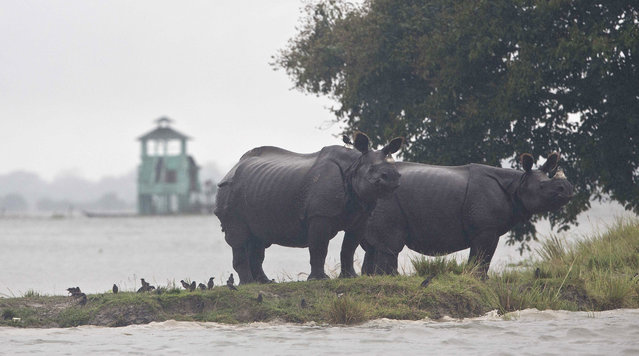 Seal mother Gina (L) yawns next to her baby Felix on July 13, 2017 at the zoo in Karlsruhe, southwestern Germany. Felix was born on July 8, 2017 at the zoo. (Photo by Uli Deck/AFP Photo/DPA) 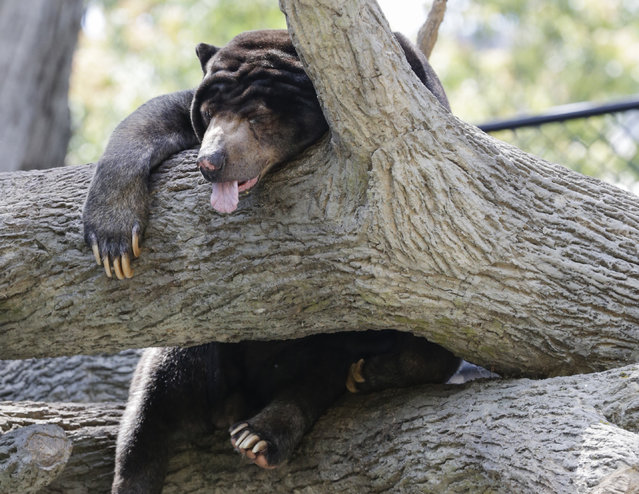 A Sun Bear, native to the tropical forests of Southeast Asia, sleeps in a tree at the Henry Doorly Zoo in Omaha, Neb., Tuesday, July 11, 2017, as temperatures reach 95 degrees Fahrenheit and the humid air makes it feel like 105 degrees. To help visitors deal with the heat, the zoo installed misting stations, is handing out water and has opened it's gates one hour earlier. (Photo by Nati Harnik/AP Photo) 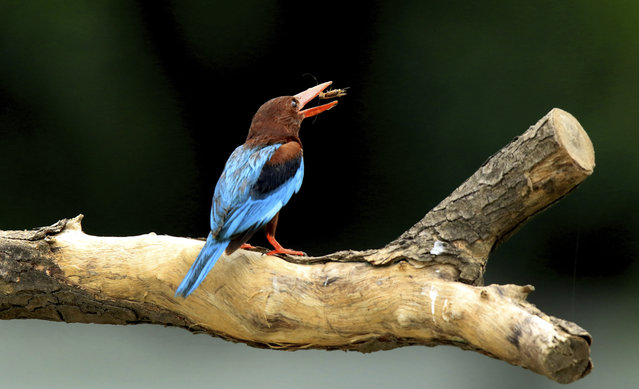 A common kingfisher sits on a branch of a tree after catching an insect in Allahabad, India, Sunday, July 9, 2017. The common kingfisher is a highly territorial bird that has to eat nearly sixty percent of its bodyweight every day. (Photo by Rajesh Kumar Singh/AP Photo)
Edit Del
16 Jul 2017 07:52:00, post received 0 comments
Publication archive:
←   →
Popular tags:
All tags
Last searches: