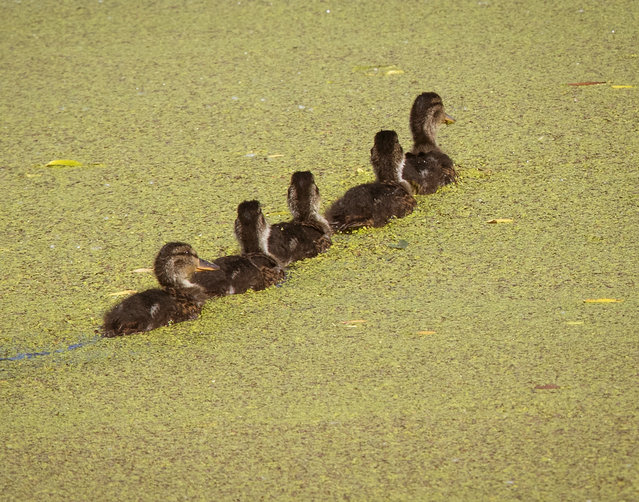 Ducklings swim on the green surface of a small lake near the base of the German national soccer team during the 2018 soccer World Cup in Vatutinki near Moscow, Russia, Friday, June 15, 2018. (Photo by Michael Probst/AP Photo) 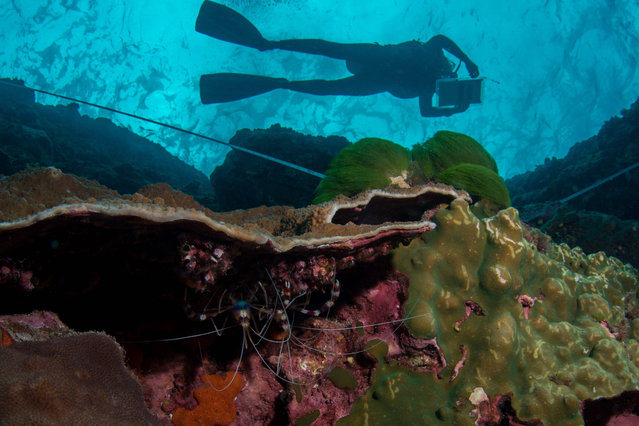 This undated handout photo taken by Rick Stuart- Smith and released by the University of Technology Sydney on June 6, 2018 shows a diver taking notes underwater off the coast of Lord Howe Island in the Pacific ocean. .Conservation experts warned on June 6 of alarming falls in Australian fish populations and called for more marine reserves and better management to halt the declines. (Photo by Rick Stuart-Smith/AFP Photo/University of Technology Sydney) 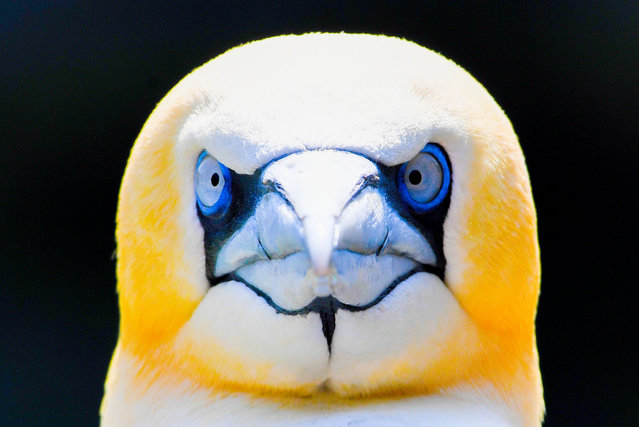 A gannet looks on in his enclosure at the Zoo in Bremerhaven, nothern Germany, on June 7, 2018. (Photo by Patrik Stollarz/AFP Photo) 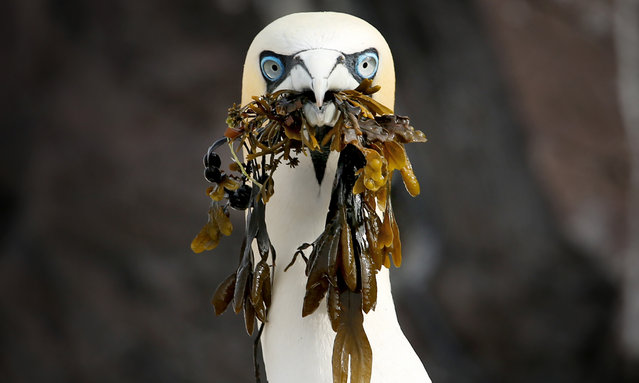 A Northern gannet picks up seaweed on Bass Rock in the Firth of Forth, Scotland on June 3, 2018 where thousands of the sea birds are gathering nest material as they prepare for the new breeding season, forming the largest single-island colony of gannets in the world. (Photo by Jane Barlow/PA Images via Getty Images) 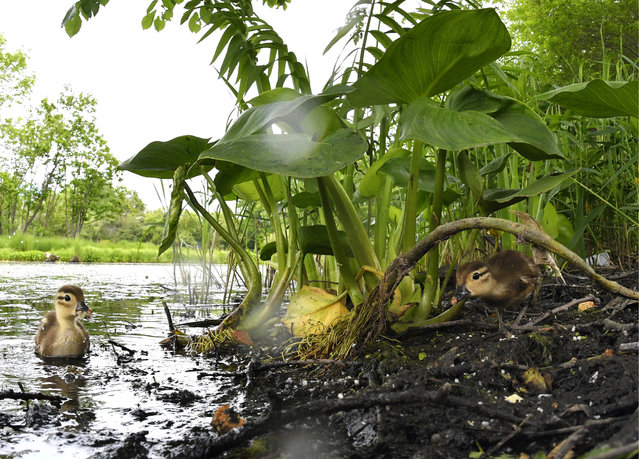 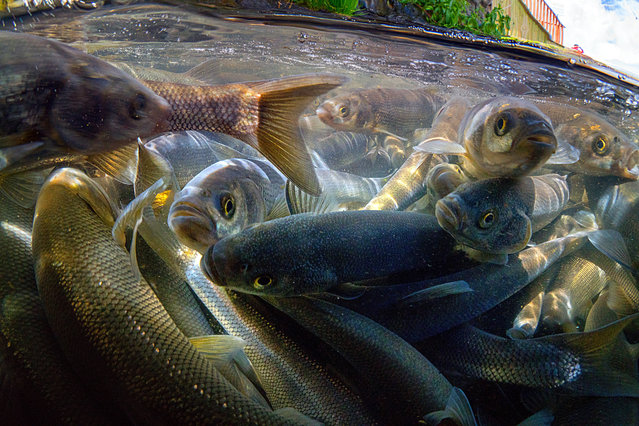 An underwater camera shows pearl mullets, an only fish species found in Van Lake as they migrate, moving the opposite direction of the water flow, from carbonated and salty water through freshwater during its spawning period from April 15 to July 15, in the eastern province of Van, Turkey on June 02, 2018. (Photo by Tahsin Ceylan/Anadolu Agency/Getty Images) 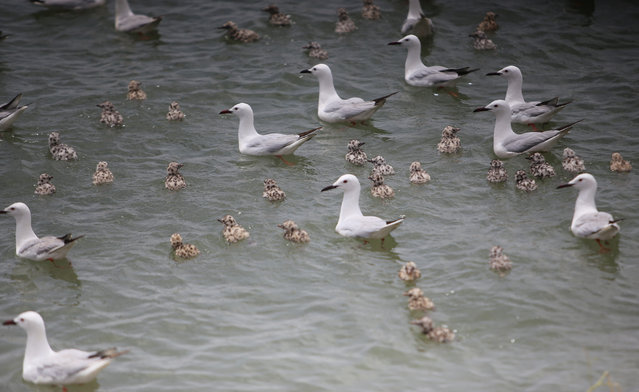 Seagulls come out in droves to a nameless islet located in the middle of Dukan Dam for spawning period in Sulaymaniyah, Iraq on May 30, 2018. The islet hosts different species of seagulls during spawning period on spring season. (Photo by Feriq Ferec/Anadolu Agency/Getty Images) 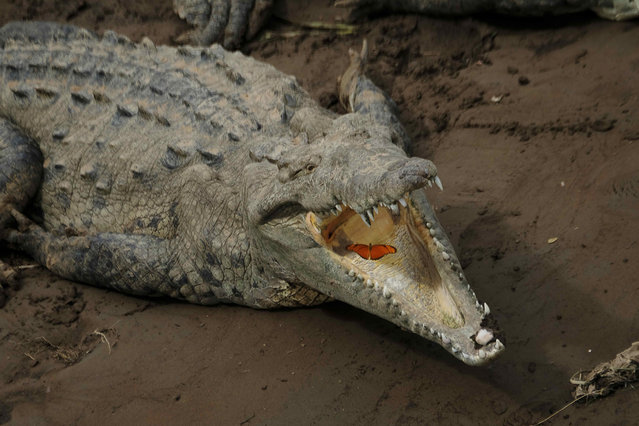 A butterfly flies into the jaws of a crocodile inhabiting the Tarcoles River, the most polluted basin in Central America and one of the most polluted in Latin America, in the place of Tarcoles, province of Puntarenas, Costa Rica, 05 June 2018. Costa Rica, a country recognized worldwide for its environmental policies, seeks to be a leader in the replacement of single-use plastic with renewable and compostable alternatives, despite its lag in terms of recycling and integrated waste management. (Photo by Jeffrey Arguedas/EPA/EFE) 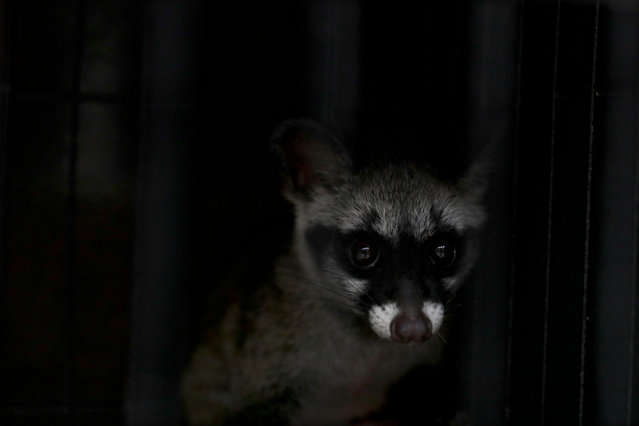 An Asian palm civet is displayed inside a cage during a press conference at the Department of Wildlife and National Parks Peninsular Malaysia (PERHILITAN) headquarters in Kuala Lumpur, Malaysia, 08 June 2018. Authorities confiscated some 628 animals of various wildlife species, 20 units of wildlife parts and 30 wildlife eggs during raids on 28 May and 04 June 2018. “385 animals and 30 eggs were seized earlier this month”, PERHILITAN director general Abdul Kadir Abu Hashim said. (Photo by Fazry Ismail/EPA/EFE) 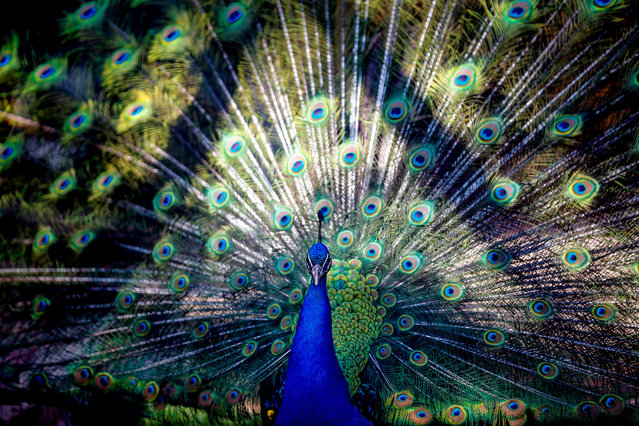 A peafowl is seen at a zoo in Turkey's Antalya province on May 31, 2018. Peafowls with their different types of colors attract people's attention. (Photo by Mustafa Ciftci/Anadolu Agency/Getty Images) 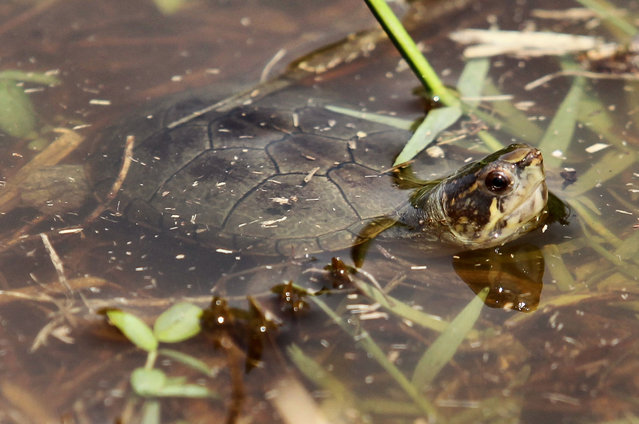 View of two Vallarta mud turtles (Kinosternon Vogti) in a river in Puerto Vallarta, Jalisco State, on June 9, 2018. The recently identified mud turtle -though endemic of this region- is one of the most threatened freshwater turtle species, due to the dramatic urban growth. (Photo by Ulises Ruiz/AFP Photo) 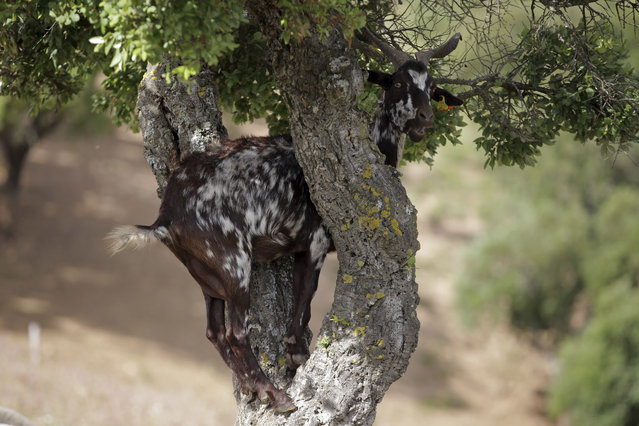 In this picture taken June 5 2018, a goat climbs on a cork oak tree to reach the leaves, in Moita da Guerra, on the hills of southern Portugal's Algarve region. The Portuguese government is hiring dozens of goat herds nationwide as part of its race against the clock to guard the country against a repeat of last year's catastrophic wildfires. That includes using goats to try and clean up as much woodland as possible before temperatures rise and the land becomes a tinder box. (Photo by Armando Franca/AP Photo) 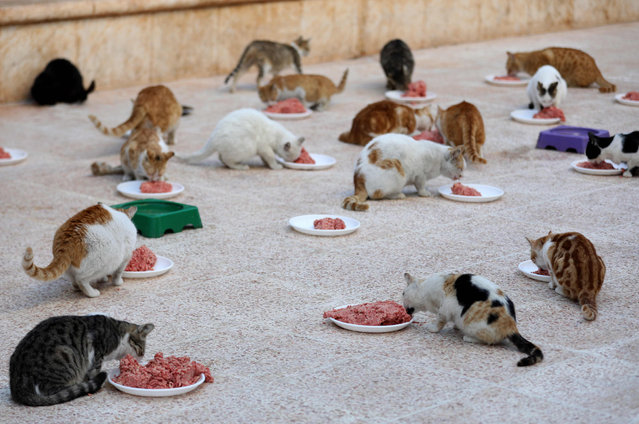 Cats feed on mincemeat at lunchtime on March 17, 2018, at Ernesto' s Cat Sanctuary run by Mohammed Alaa al- Jaleel in Kfar Naha, an opposition- held town in Aleppo province in Syria. The 43- year- old, al- Jaleel who grew up in Aleppo, has been mad about cats since he was a boy. As the war raged in Syria and cat lovers fled the city, he was left with 170 cats to feed and a new nickname: the Cat Man of Aleppo. (Photo by Omar Haj Kadour/AFP Photo) 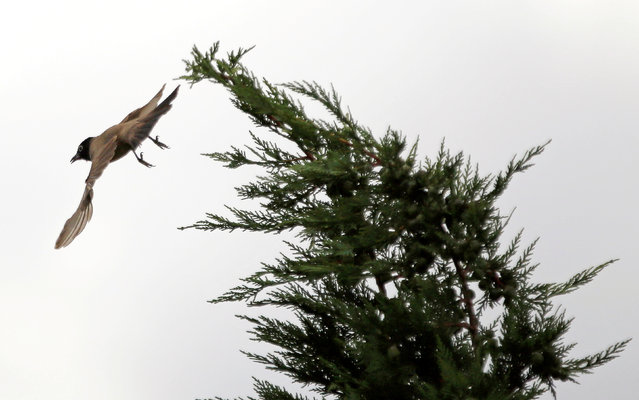 A Bulbul bird is seen near a tree in the southern village of Khiam,Lebanon June 2, 2018. (Photo by Jamal Saidi/Reuters) 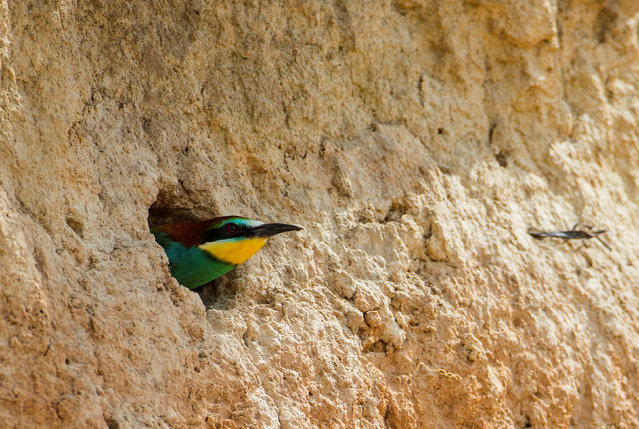 A European bee-eater looks out from its nest near the village of Alekseevka, Belarus June 2, 2018. (Photo by Vasily Fedosenko/Reuters) 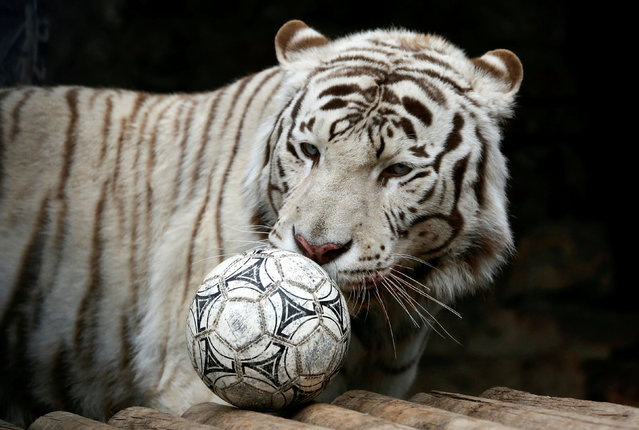 Khan, a seven-year-old male White Bengal tiger, plays with a ball during the “Football Day” event, organized by zoo employees to mark the upcoming 2018 FIFA World Cup, at the Royev Ruchey zoo in the Siberian city of Krasnoyarsk, Russia June 5, 2018. (Photo by Ilya Naymushin/Reuters) 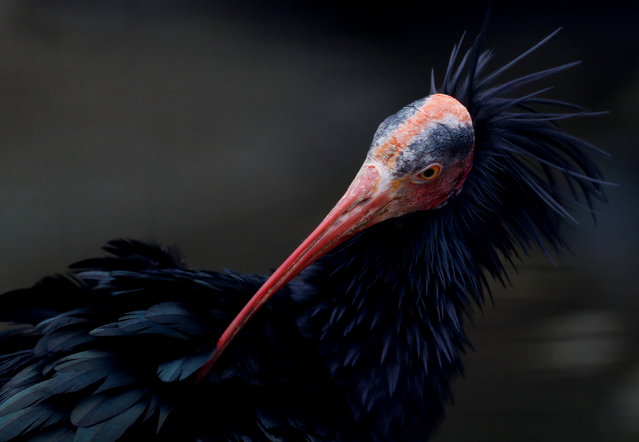 A northern bald ibis is seen in his enclosure in Schoenbrunn Zoo in Vienna, Austria June 7, 2018. (Photo by Leonhard Foeger/Reuters) 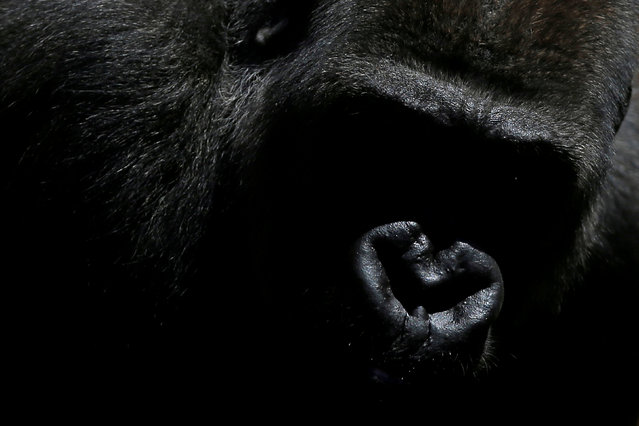 Echo, a 9-year-old blackback coast gorilla (Gorilla gorilla gorilla), is pictured in his enclosure during his presentation after arriving from the Kolmarden Wildlife Park of Sweden as part of the EEP (European Endangered Species Programmes) to form a breeding group at Bioparc Fuengirola in Fuengirola, near Malaga, southern Spain, June 12, 2018. (Photo by Jon Nazca/Reuters) 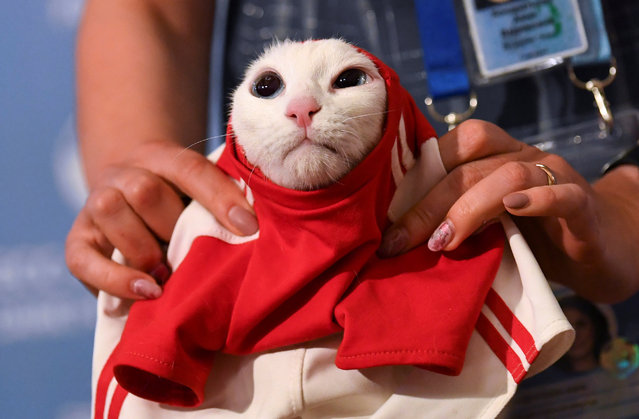 A participant dresses Achilles the cat, one of the State Hermitage Museum mice hunters, which attempts to predict the result of the opening match of the 2018 FIFA World Cup between Russia and Saudi Arabia during an event in Saint Petersburg, Russia June 13, 2018. (Photo by Dylan Martinez/Reuters) 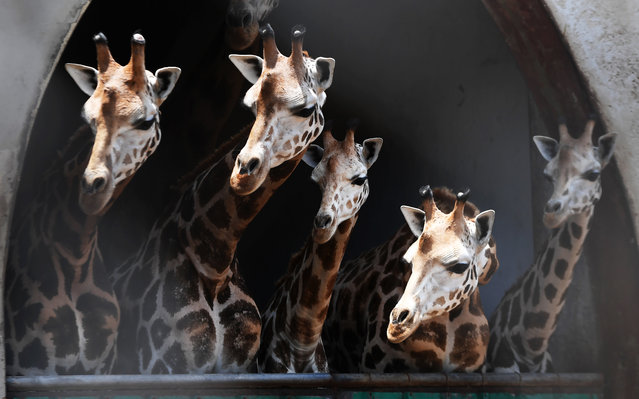 Giraffes look on from their enclosure as a newly born giraffe calf with its mother is separated from others at the Alipore Zoological Garden, in Kolkata on June 7, 2018. (Photo by Dibyangshu Sarkar/AFP Photo) 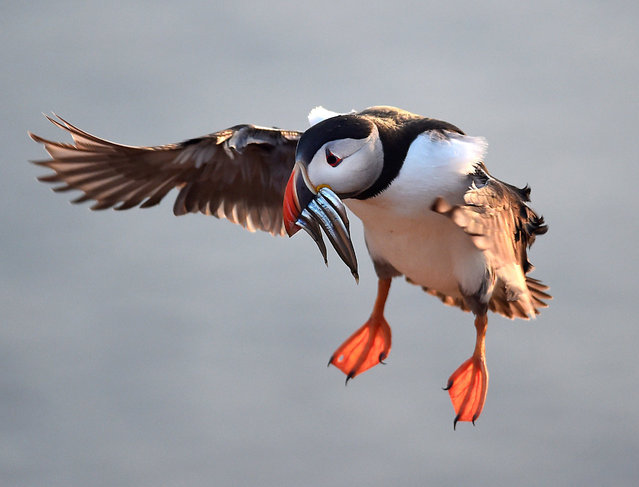 An Atlantic Puffin with sand eels in its bill flies to its burrow on the island of Skomer, Pembrokeshire, one of the most important wildlife sites in Europe and the breeding place for over 30,000 Atlantic Puffins, in Wales, Britain June 9, 2018. (Photo by Rebecca Naden/Reuters)
Edit Del
17 Jun 2018 00:03:00, post received 0 comments
Publication archive:
←   →
Popular tags:
All tags
Last searches: