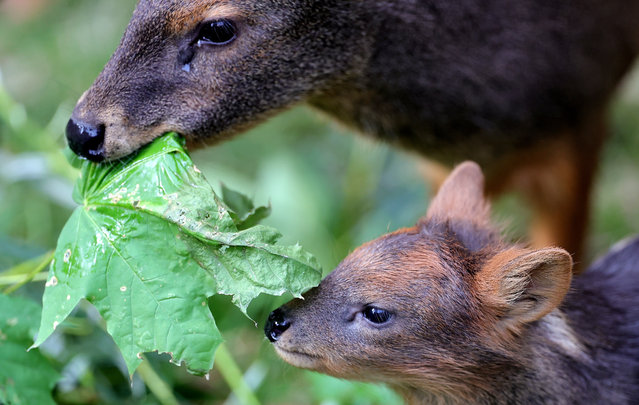 A newborn Southern Pudu baby with his mother in the enclosure at the Zoo in Cologne, Germany, 01 October 2020. The Southern Pudu is the sm​allest deer species in the world and doesn't get much bigger than hares. (Photo by Friedemann Vogel/EPA/EFE) 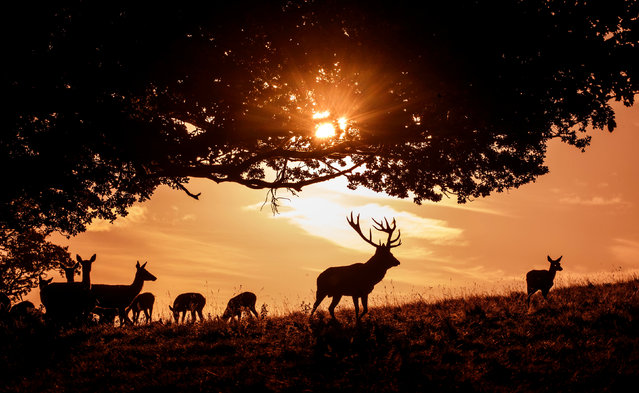 A stag shelters near a tree as the Autumn sun rises over Studley Royal Deer Park in North Yorkshire, England on October 7, 2020. (Photo by Danny Lawson/PA Images via Getty Images) 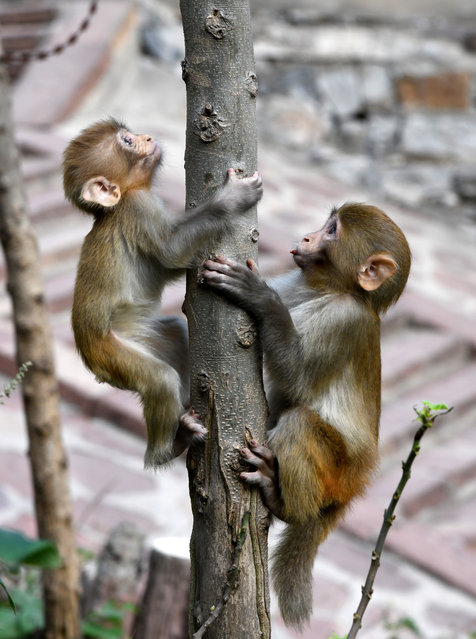 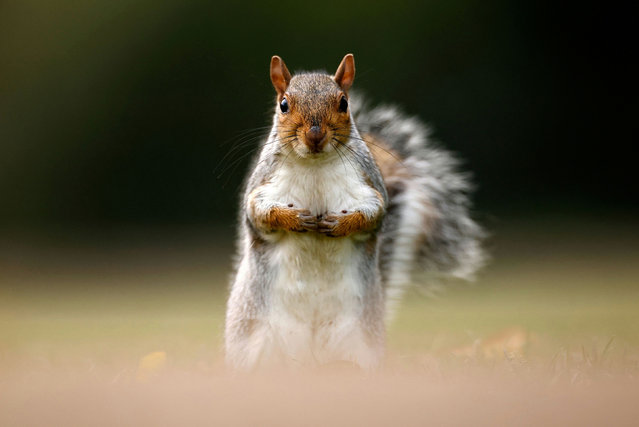 A squirrel is seen in St James's Park in London, Britain on October 16, 2020. (Photo by John Sibley/Reuters) 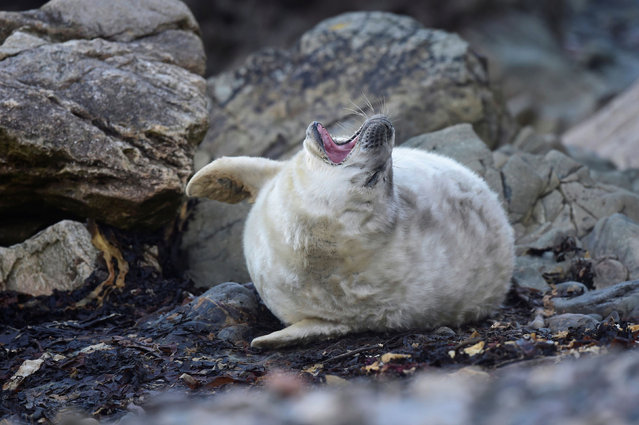 A seal pup, known locally as “Snowflake” is seen amongst the rocks, in Deer Park, Marloes, Pembrokeshire, Wales, Britain on October 15, 2020. (Photo by Rebecca Naden/Reuters) 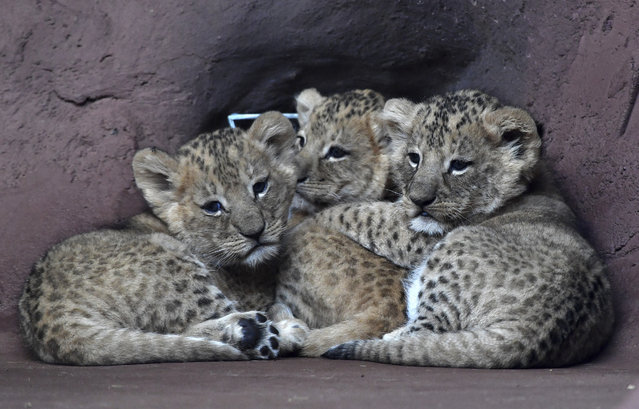 Three lion cubs in the Thuringian zoo park in central Germany on October 6, 2020. They were born at the end of August, now the little tomcat and the two kittens can be presented to the public.(Photo by Martin Schutt/dpa-Zentralbild/AP Photo) 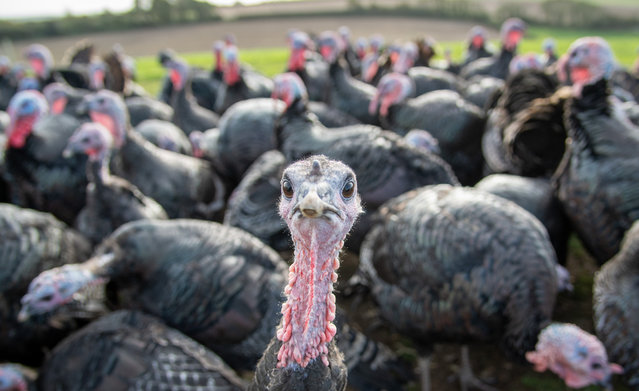 Turkeys are seen at Chilcott Turkeys farm on October 07, 2020 in Owermoigne, United Kingdom. Mark Chilcott of free-range Chilcott Turkeys farm has reared 1200 smaller turkeys to cater for the low demand for large birds due to the COVID-19 Rule of Six and smaller gatherings this coming Christmas. (Photo by Finnbarr Webster/Getty Images) 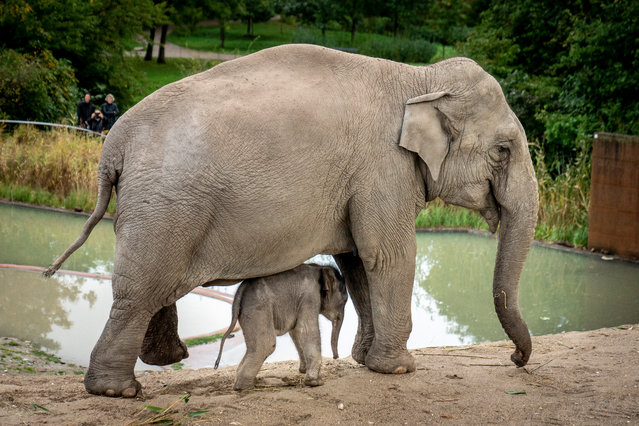 Baby elephant Mun, born on 01 October released into the outdoor facility for the first time in Copenhagen Zoo, Denmark, 07 October 2020. The baby elephant is accompanied by his mother the 22-year-old Asian elephant Surin. (Photo by Mads Claus Rasmussen/EPA/EFE) 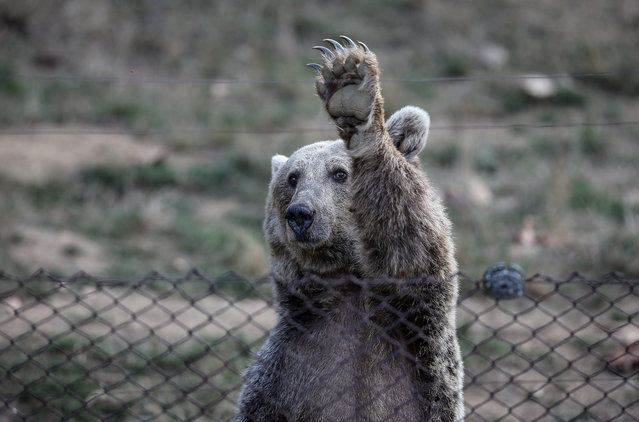 A bear raises its paw behind the fences at Ovakorusu Celal Acar Wild Animal Rescue and Rehabilitation Center in Karacabey district of Bursa, Turkey on October 07, 2020. 69 bears found here receive special care and nutrition programs ahead of hibernation. (Photo by Sergen Sezgin/Anadolu Agency via Getty Images) 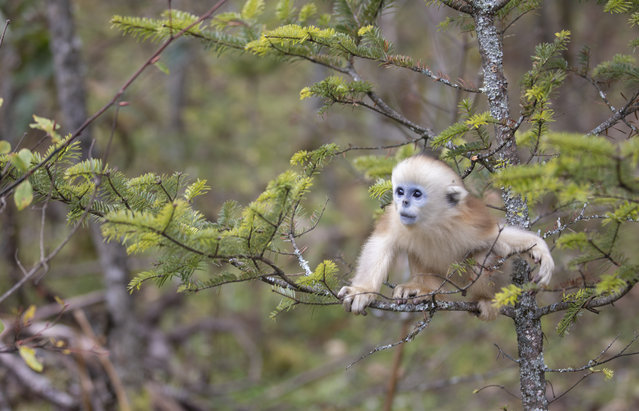 Photo taken on October 11, 2020 shows a golden monkey at Dalongtan Golden Monkey Research Center in Shennongjia National Park of central China's Hubei Province. With the efforts of local authority and improvement of the environment in the past many years, the number of golden monkeys in Shennongjia area reached nearly 1,500 nowadays. (Photo by Xinhua News Agency/Rex Features/Shutterstock) 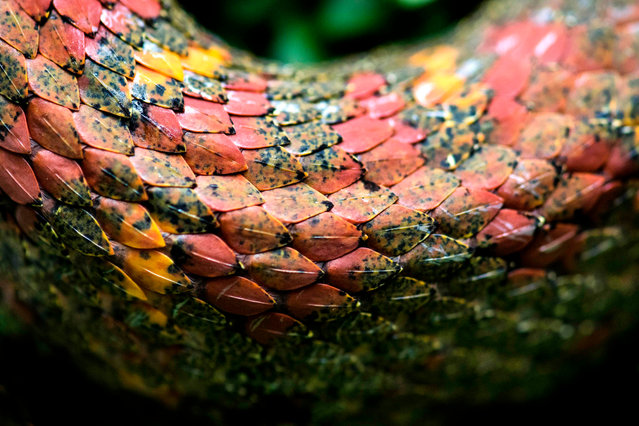 View of a poisonous Bocara Snake at the Clodomiro Picado Institute, in San Jose, Costa Rica, September 24, 2020. The Clodomiro Picado Institute obtained coronavirus proteins from laboratories in China and the United Kingdom to immunize six donated horses for treatment, and which plasma was used to produce a viral treatment to be tested in 26 patients infected with the new Covid-19. To develop the drug, the institute based on its half-century experience in the production of antivenom, which it currently exports to other Central American countries, Ecuador, Colombia, Peru and several African nations. (Photo by Ezequiel Becerra/AFP Photo) 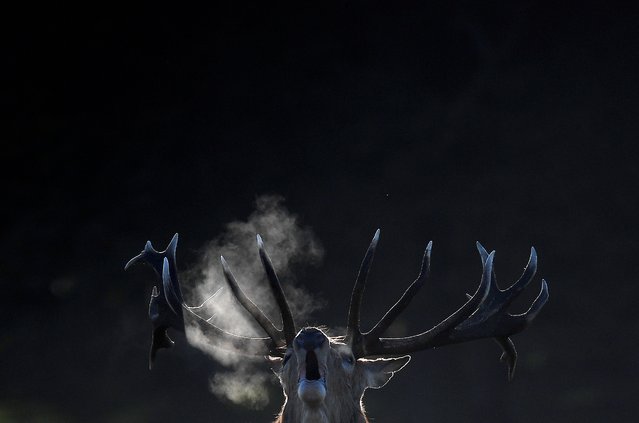 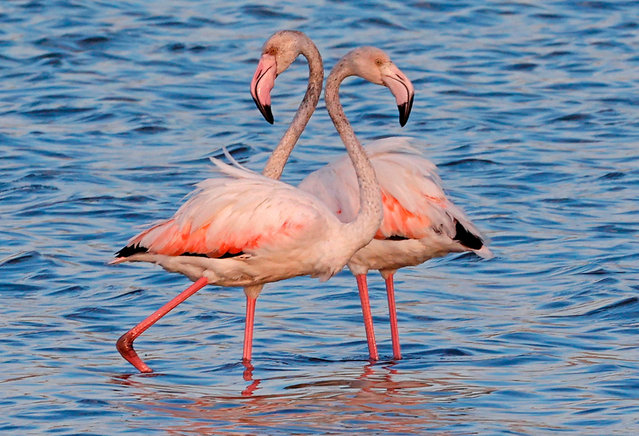 Flamingos (aka Phoenicopterus Roseus) are pictured at a reservoir in Atlit, north of Tel Aviv on October 13, 2020. Flamingos pass through Israel on their way to Africa then again when they return to Europe in the summer. (Photo by Jack Guez/AFP Photo) 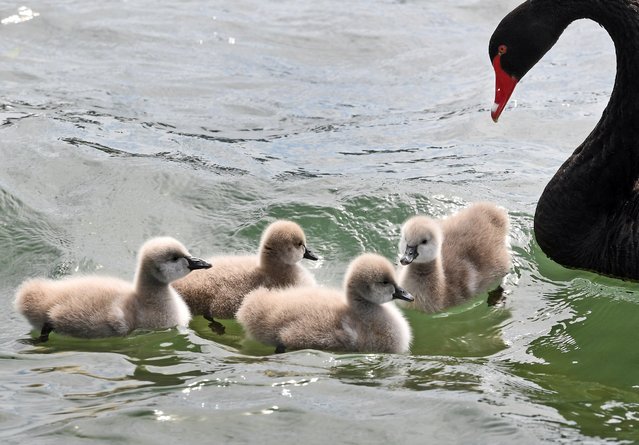 A swan looks over her four cygnets as they swim in Melbourne's Albert Park Lake on October 12, 2020. (Photo by William West/AFP Photo) 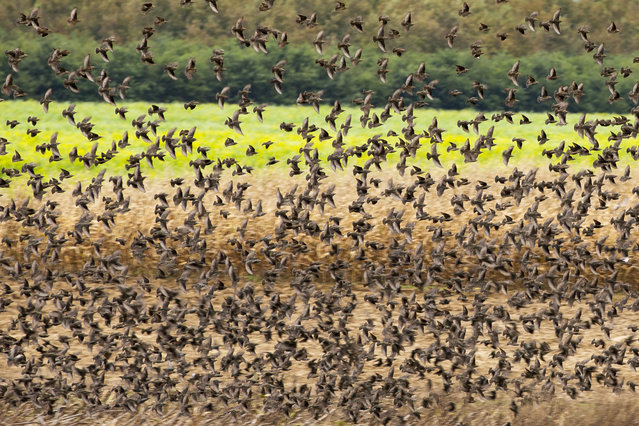 A flock of starlings (Sturnus vulgaris) look for food over a field of reaped sunflowers near Inke, Hungary, 12 October 2020. (Photo by Gyorgy Varga/EPA/EFE) 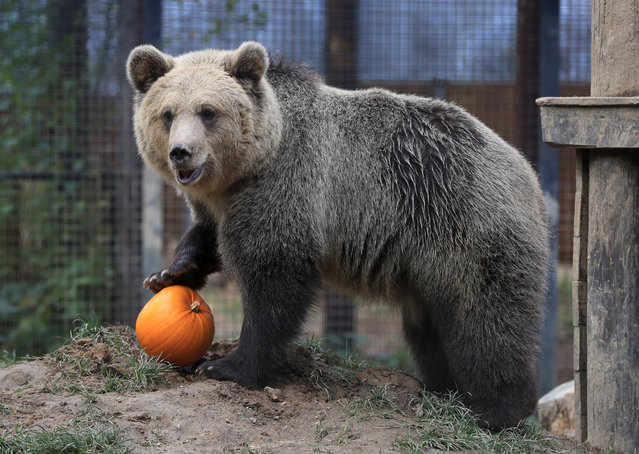 Lucy, one of two rescued 19 month old brown bear cubs enjoys playing with a pumpkin as part of their enrichment at the Wildwood Trust in Herne Bay, Kent on October 12, 2020. The orphaned pair who were found abandoned and alone in a snowdrift in the Albanian mountains have been acclimatising at the trust to their new life in the UK before moving to a permanent home next year. (Photo by Gareth Fuller/PA Images via Getty Images) 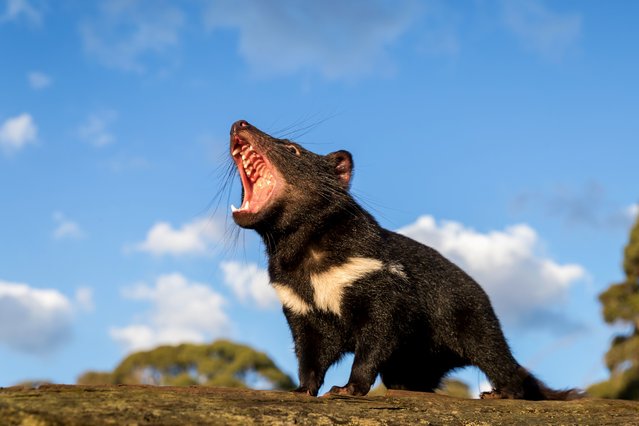 This undated handout photo released by Aussie Ark on October 1, 2020 shows a Tasmanian devil walking in the wild in mainland Australia. Tasmanian devils have been released into the wild on Australia's mainland 3,000 years after the feisty marsupials went extinct there, in what conservationists described on October 5 as a “historic” step. (Photo by Aussie Ark/Handout via AFP Photo) 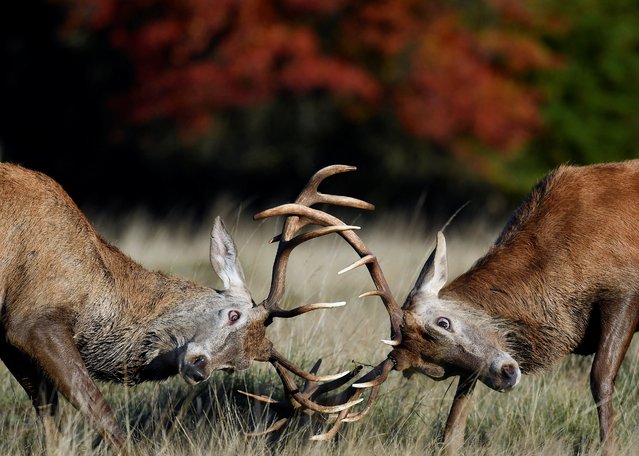 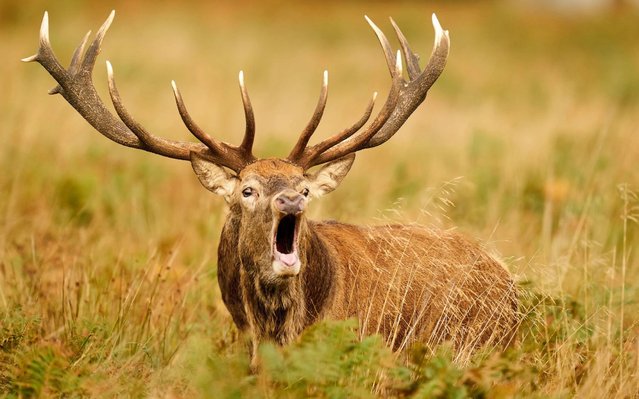