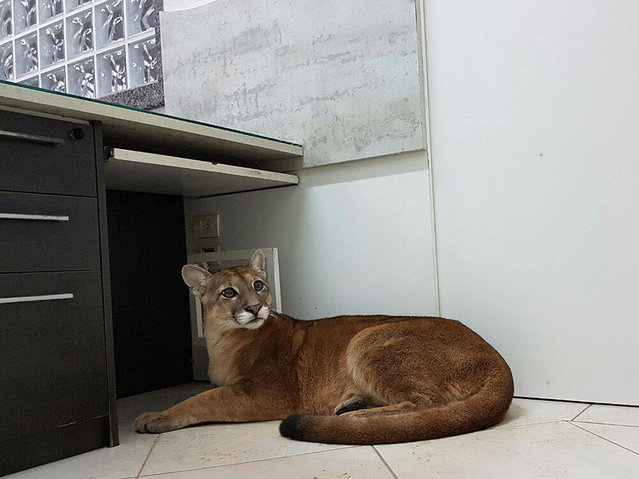 Handout picture released on August 14, 2017 by Sao Paulo state fire department showing a puma at an office building in Itapecerica da Serra, Sao Paulo state, Brazil on August 14, 2017. A business in Itapecerica da Serra, a small town near Brazil' s biggest city Sao Paulo, called in the local fire service after the discovery of a dark brown puma on the floor. “We believe the puma came out of its habitat because of constant wildfires”, the Sao Paulo state fire department said on Facebook. After being rescued, the puma was delivered to a non- governmental organization specializing in wild animals. (Photo by AFP Photo/São Paulo State Fire Department) 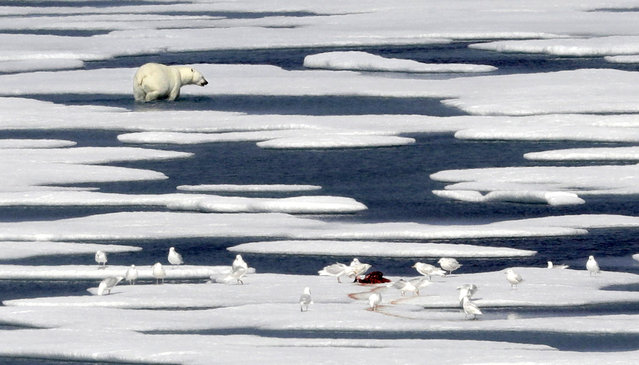 A polar bear walks away after feasting on the carcass of a seal on the ice in the Franklin Strait in the Canadian Arctic Archipelago, Saturday, July 22, 2017. No Arctic creatures have become more associated with climate change than polar bears. The U.S. Fish and Wildlife Service estimated in January that about 26,000 specimens remain in the wild. (Photo by David Goldman/AP Photo) 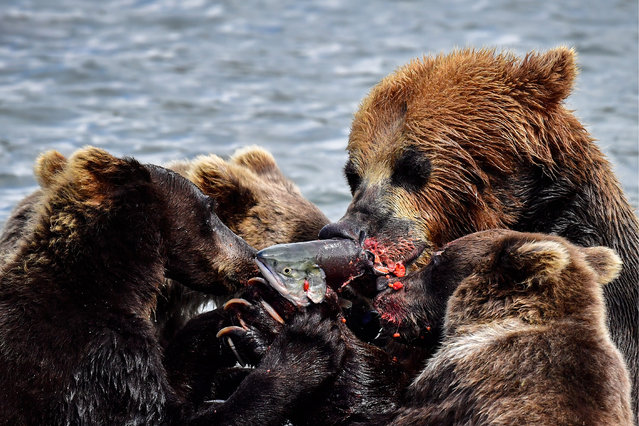 A female brown bear with cubs fishing on Lake Kronotskoye as part of the South Kamchatka, Russia on Sanctuary, August 13, 2017. (Photo by TASS/Barcroft Images) 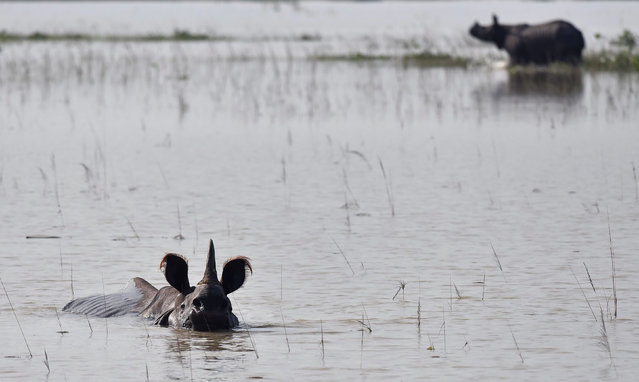 Indian one- horned rhinoceroses wade through flood waters in a submerged area of the Pobitora wildlife sanctuary in India' s northeastern Assam state on August 17, 2017. At least 221 people have died and more than 1.5 million have been displaced by monsoon flooding across India, Nepal and Bangladesh, officials said August 15, as rescuers scoured submerged villages for the missing. (Photo by Biju Boro/AFP Photo) 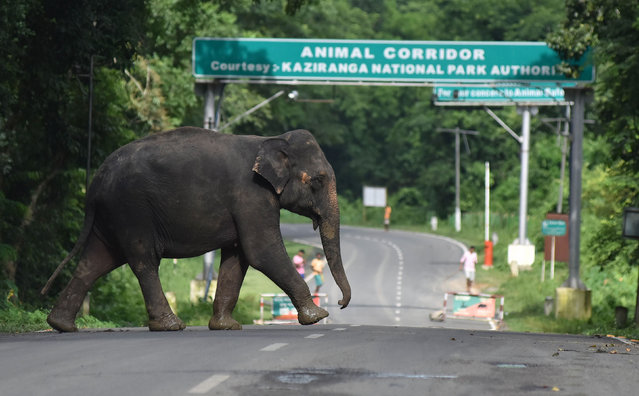 An elephant crosses National Highway-37, which passes through the flooded Kaziranga National Park in the northeastern state of Assam on August 14, 2017. (Photo by Biju Boro/AFP Photo) 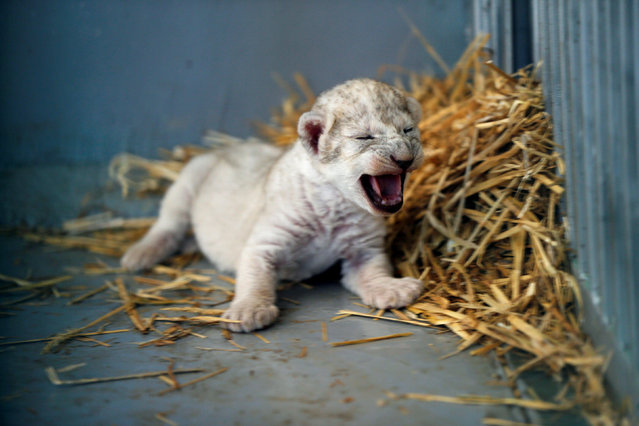 A newborn lion cub squeals in a cage at the al-Ma’wa wildlife reserve in Jerash, Jordan on August 16, 2017. (Photo by Muhammad Hamed/Reuters) 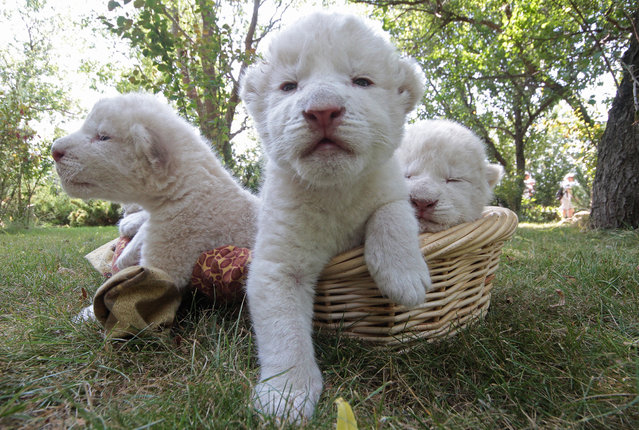 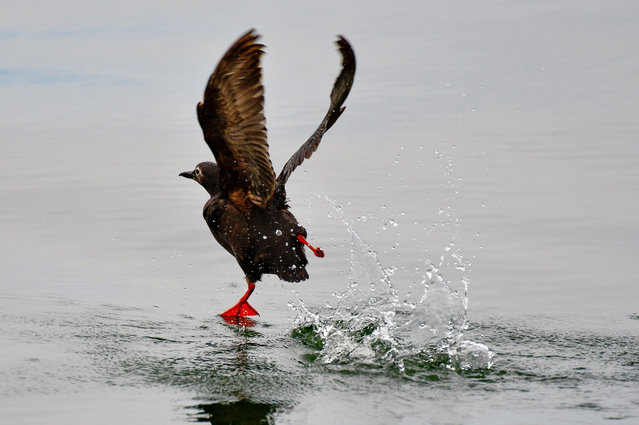 A guillemot in Avacha Bay on the Kamchatka Peninsula, Russia on August 15, 2017. (Photo by Yuri Smityuk/TASS) 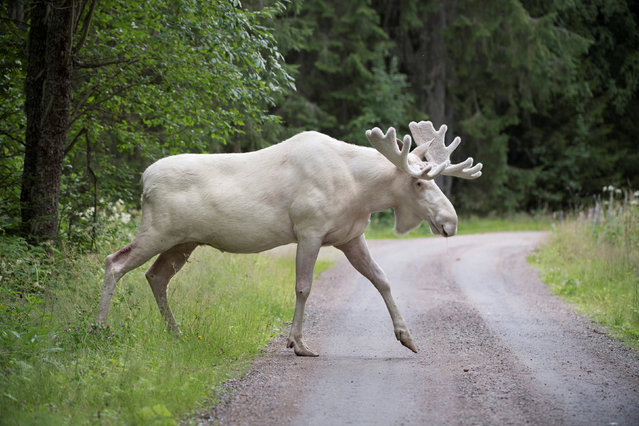 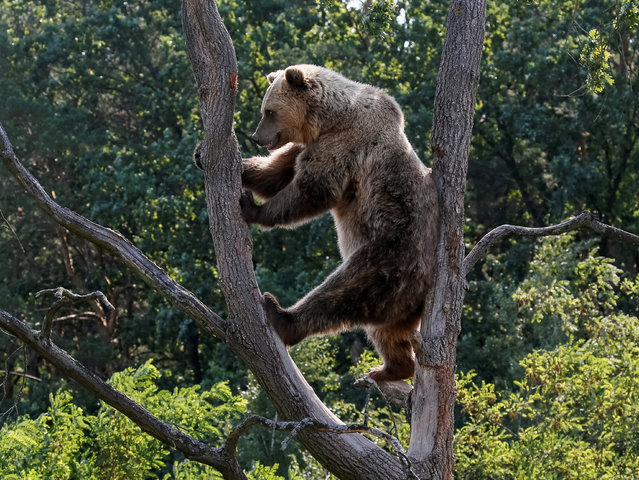 A brown bear is seen in a shelter for bears in the village of Berezivka near Zhytomyr, Ukraine August 15, 2017. Five bears, which suffered bad treatment were rescued from circuses and private zoos and restaurants, live in the bear rescue center, opened in 2012 by international animal charity Four Paws. (Photo by Gleb Garanich/Reuters) 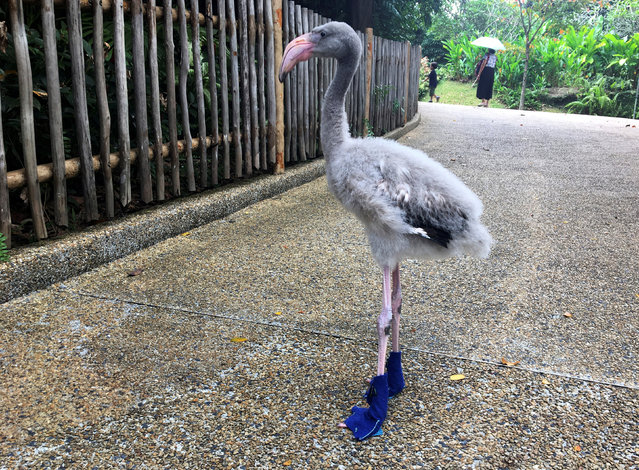 A baby Greater Flamingo named Squish struts in its booties, made by keepers to protect its feet from the hot concrete ground, at the Jurong Bird Park in Singapore August 17, 2017. (Photo by Natasha Howitt/Reuters) 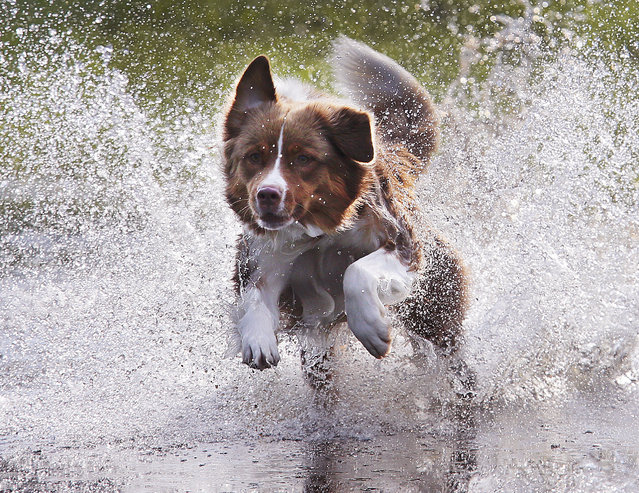 Australian shepherd dog Lizzi runs through the water to catch a ball in a park in Frankfurt, Germany, Thursday, August 17, 2017. (Photo by Michael Probst/AP Photo) 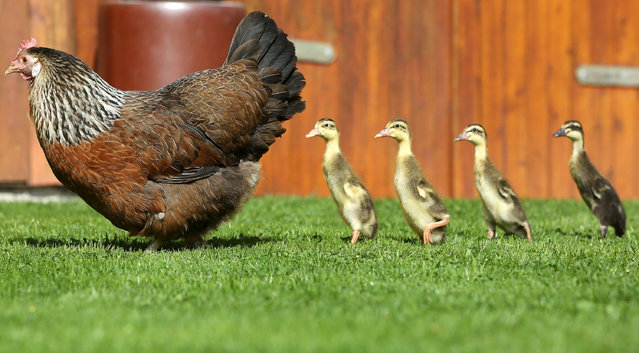 Emma the hen standing with four runner duck chicks in a field in Altheim- Waldhausen, Germany, 16 August 2017. Emma brooded the eggs and is now raising the ducklings. (Photo by Thomas Warnack/DPA/Bildfunk) 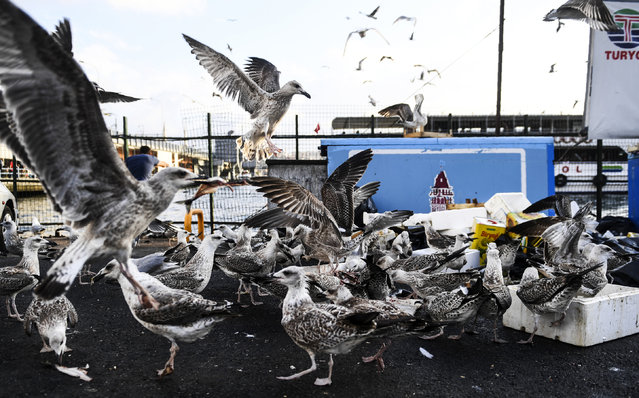 Seagulls fight for fish remains at a fish market in the Karakoy district in Istanbul on August 16, 2017. (Photo by Bulent Kilic/AFP Photo) 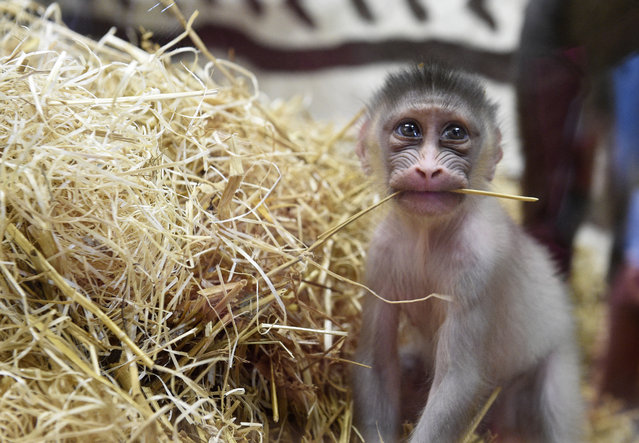 A newborn baby mandrill plays next to its mother on August 17, 2017 at the zoological park in Amneville, eastern France. (Photo by Jean-Christophe Verhaegen/AFP Photo) 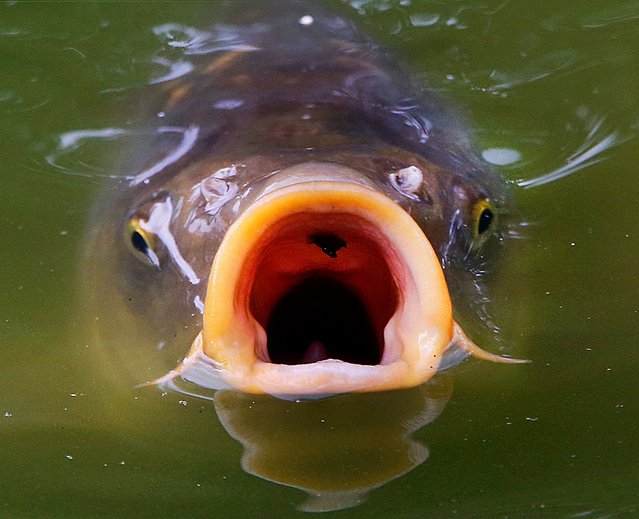 A carp swims on the surface of a pond in the Palmengarten park in Frankfurt, Germany, Monday, August 14, 2017. (Photo by Michael Probst/AP Photo) 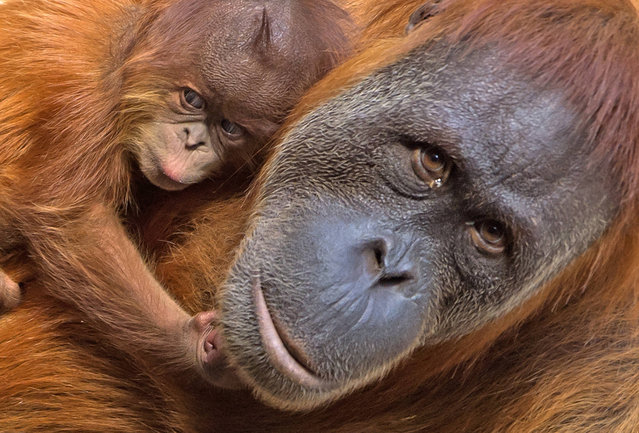 A baby orangutan relaxes near its mother Padana at the zoo in Leipzig, Germany, Tuesday, August 15, 2017. The baby orangutan, whose gender is not yet known, was born on Aug. 5, 2017. (Photo by Jens Meyer/AP Photo) 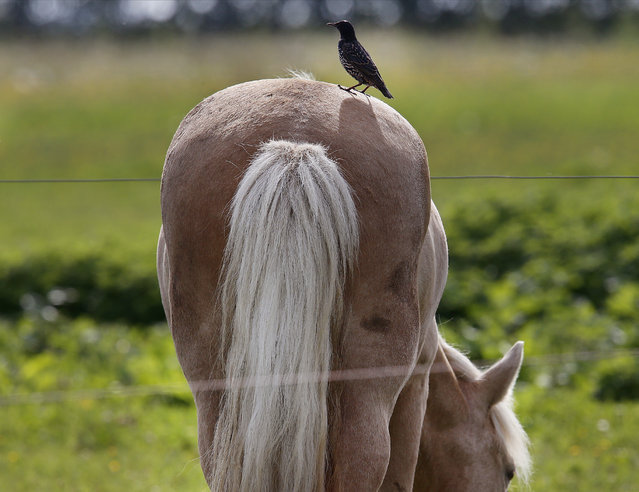