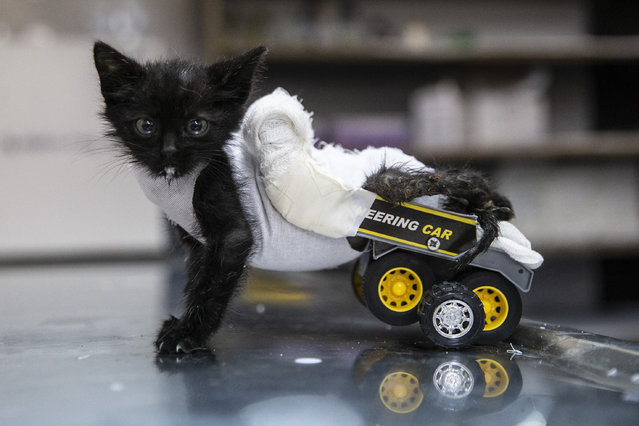 A disabled cat, which injured his hind legs and became disabled after a car accident is seen with his wheelchair made from toy truck, at an animal shelter in Edirne, Turkey on October 16, 2019. The cat found by university students in Edirne and started to move with the aim of the wheel chair made by shelter officials. (Photo by Gokhan Balci/Anadolu Agency via Getty Images) 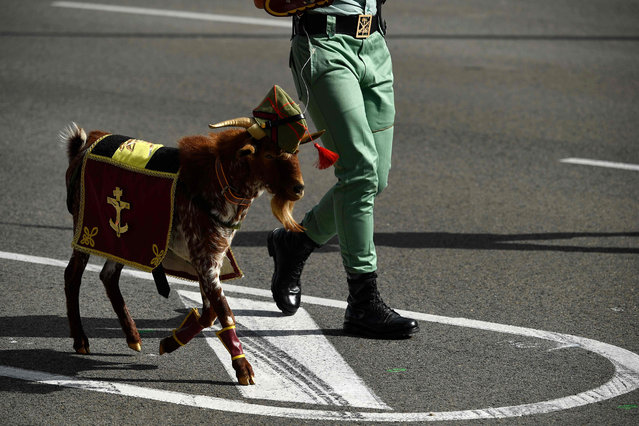 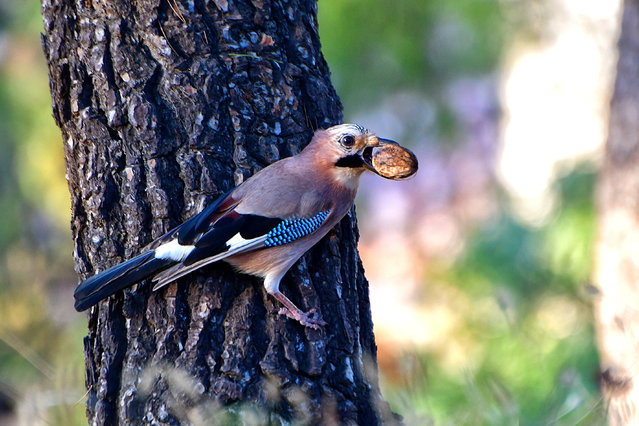 A Greek magpie bird holds in its beak a nut, at Nafplio, Peloponnese, Greece, 17 October 2019. (Photo by Bougiotis Vangelis/EPA/EFE) 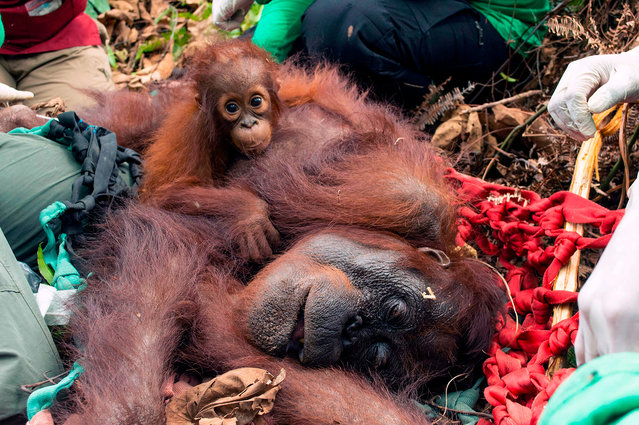 This handout picture taken on October 11, 2019 and released by International Animal Rescue shows an orangutan nicknamed Mama Sifa (R) and her cub Sifa being released into the forest in Ketapang, West Kalimantan. Sifa and her mother Mama Sifa were rescued from the recent massive forest fires in Indonesia that have caused a toxic haze to spread as far as Singapore and peninsular Malaysia seriously affecting endangered orangutans and their habitat. (Photo by International Animal Rescue/AFP Photo) 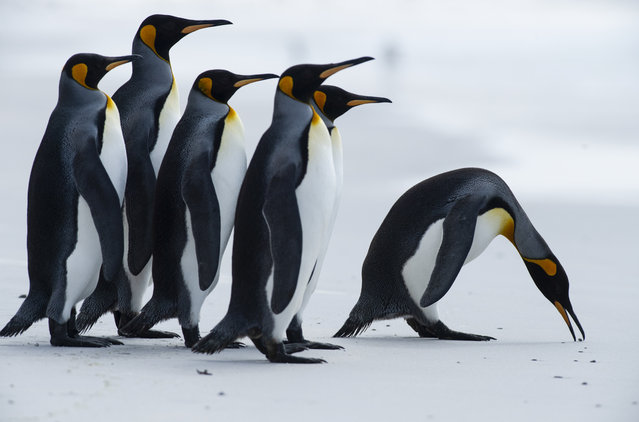 King penguins are seen at Volunteer Point, north of Stanley in the Falkland Islands (Malvinas), a British Overseas Territory in the South Atlantic Ocean, on October 6, 2019. The Falklands has an incredibly rich biodiversity including more than 25 species of whales and dolphins, but it is the guaranteed ability to get up close and personal with penguins that makes it such an enticing destination. There are five penguin species in the archipelago – King, Rockhopper, Gentoo, Magellanic and Macaroni. (Photo by Pablo Porciuncula Brune/AFP Photo) 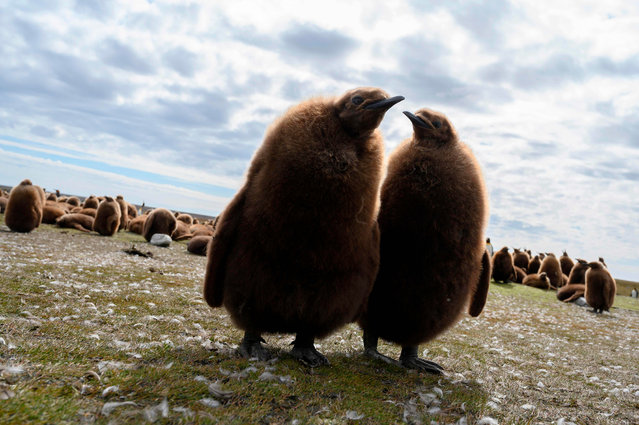 King penguin chicks are seen at Volunteer Point, north of Stanley in the Falkland Islands (Malvinas), a British Overseas Territory in the South Atlantic Ocean, on October 6, 2019. (Photo by Pablo Porciuncula Brune/AFP Photo) 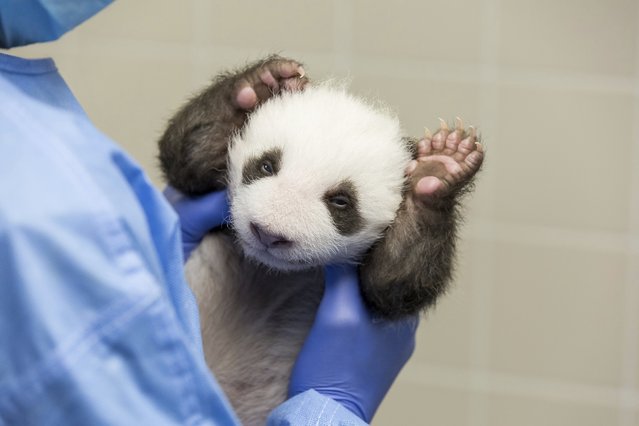 In this photo provide by the Berlin Zoo on Friday, October 18, 2019, a person holds one of the Zoo's Panda twins at the Zoo in Berlin. Zoo Berlin's panda twins, born on Aug. 31, 2019, open their eyes for the first time. (Photo by Zoo Berlin via AP Photo) 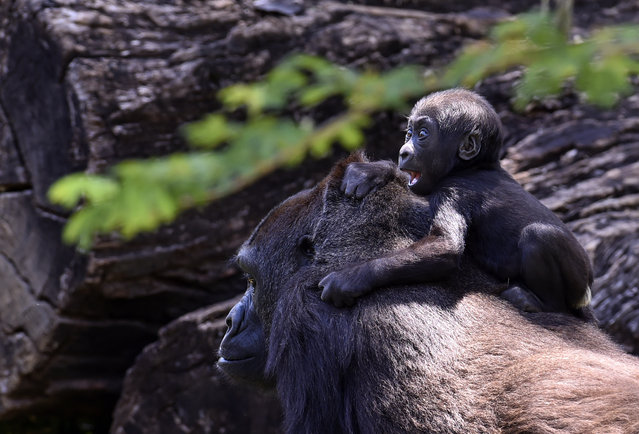 Western lowland gorilla Lou Lou and her daughter are seen at the zoo in Belo Horizonte, Brazil, on October 14, 2019. The baby gorilla was born on July 8, 2019, and is the fourth of the species -which appears on the International Union for Conservation of Nature (IUCN) red list as critically endangered- to be born in the zoo, the only zoo in South America to succeed in breeding the species. (Photo by Douglas Magno/AFP Photo) 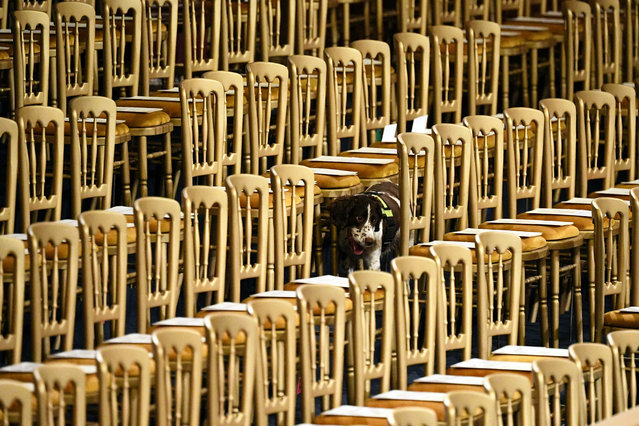 A search dog patrols the Royal Gallery ahead of the State Opening of Parliament at the Palace of Westminster in London, Britain on October 14, 2019. (Photo by Leon Neal/Pool via Reuters) 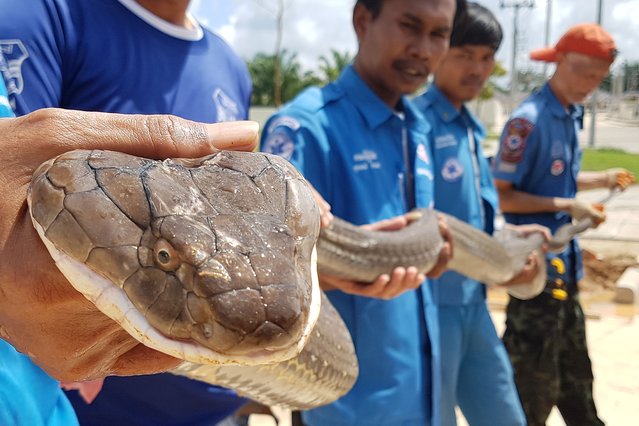 This handout from the Krabi Pitakpracha Foundation taken on October 13, 2019 and received on October 15, 2019 shows members of the rescue foundation holding a four-metre long king cobra that was found in a sewer in Krabi. Rescuers pulled a fiesty four-metre long King Cobra from a sewer in southern Thailand after an hourlong operation, a rescue foundation said on October 15, calling it one of the largest ever captured there. (Photo by Krabi Pitakpracha Foundation/AFP Photo) 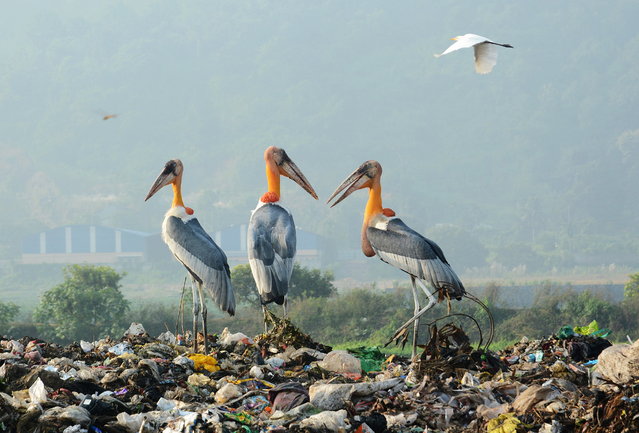 A flock of Adjutants storks sit on a garbage dump at Borgaon in Guwahati, Assam, India, 17 October 2019. Wildlife activists and environmentalists have protested in the past for shifting the garbage dump to another site since it is situated near the Deepor Beel Bird Sanctuary. (Photo by EPA/EFE/Stringer)
Edit Del
20 Oct 2019 00:03:00, post received 0 comments
Publication archive:
←   →
Popular tags:
All tags
Last searches: