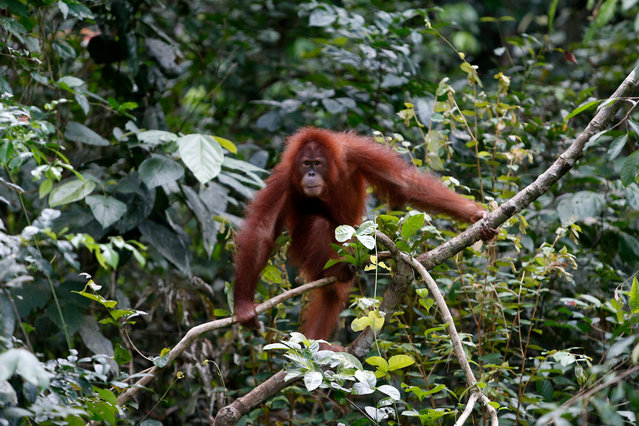 Rere a four and half year old Sumatran Orangutan hangs from a tree after being released into the wild from a cage at the Sumatran Orangutan Conservation Program (SOCP) Reintroduction and Quarantine Station in Jantho, Aceh Besar, Indonesia, 18 June 2019. Sumatran Orangutan Conservation Program (SOCP) together with Aceh Natural Resource Agency release two orangutans into the wild from the rehabilitation station after the orangutan having lost their original habitat from widespread illegal logging and destruction of forest for palm oil plantations. Indonesia is the world's largest producer of palm oil, made from the pulp of the palm fruit, followed closely by Malaysia. Palm plantations have been built on land taken from destroyed tropical rainforest, causing the death and displacements of many species, among them the critically endangered orangutan. (Photo by Hotli Simanjuntak/EPA/EFE) 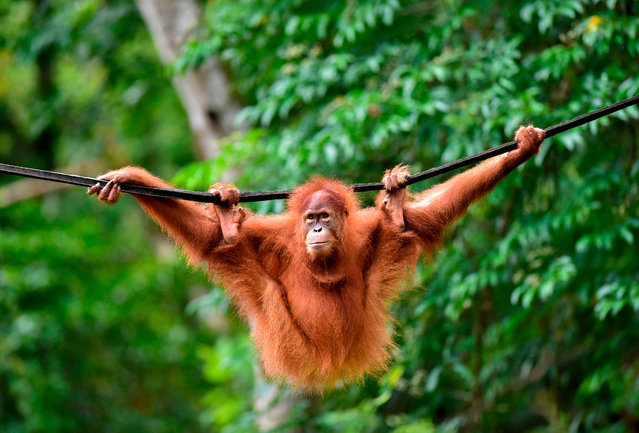 This picture taken on June 18, 2019 shows a young Sumatran orangutan named Elaine swinging on a line at the forest reserve in Jantho. Five-year-old Elaine and another four-year-old primate spent nearly two years learning to fend for themselves at a rehabilitation centre and “forest school” before being returned to the wild at Pinus Jantho Forest Reserve. (Photo by Chaideer Mahyuddin/AFP Photo) 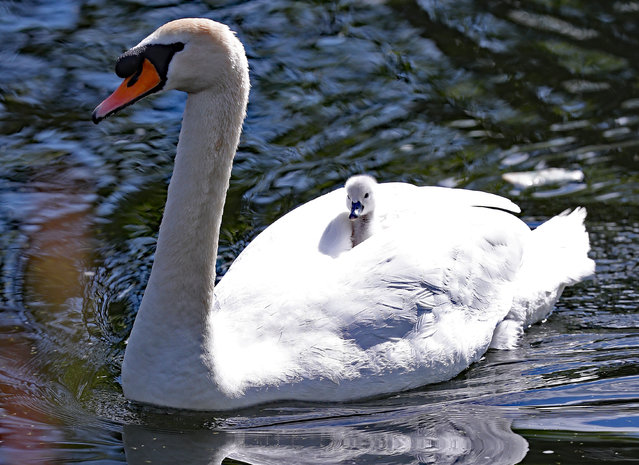 A swan with a cygnet on its back on the Royal Canal near Phibsborough in Dublin, Ireland on June 17, 2019. (Photo by Niall Carson/PA Wire Press Association) 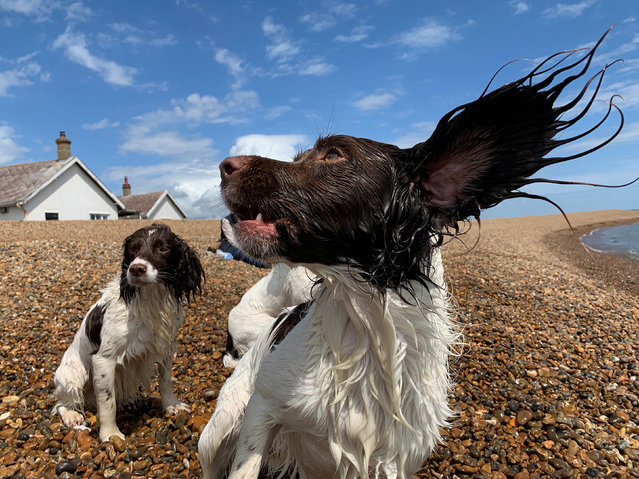 A stray polar bear is seen in the Siberian industrial city Norilsk, Russia on June 17, 2019. The hungry bear is hundreds of miles from its natural habitat. (Photo by Irina Yarinskaya/Reuters/Zapolyarnaya Pravda) Sled dogs make their way in northwest Greenland on June 15, 2019 with their paws in melted ice water. Over the weekend, this picture taken by Danish climate researchers showing sled dogs on the ice in northwest Greenland with their paws in melted ice water was widely shared on social media. Greenland’s ice melting season normally runs from June to August but the Danish Meteorological Institute said this year’s melting started on April 30, the second-earliest time on record going back to 1980. (Photo by Steffen M. Olsen/Danmarks Meteorologiske Institut/AP Photo) 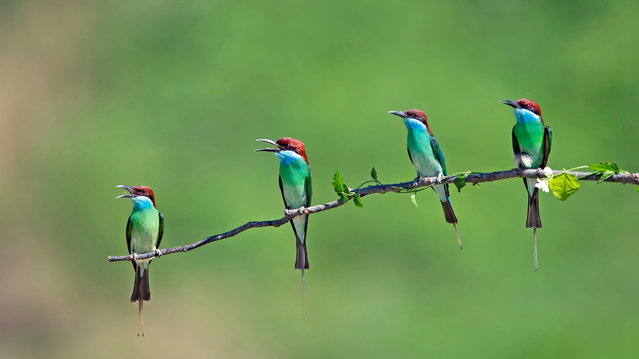 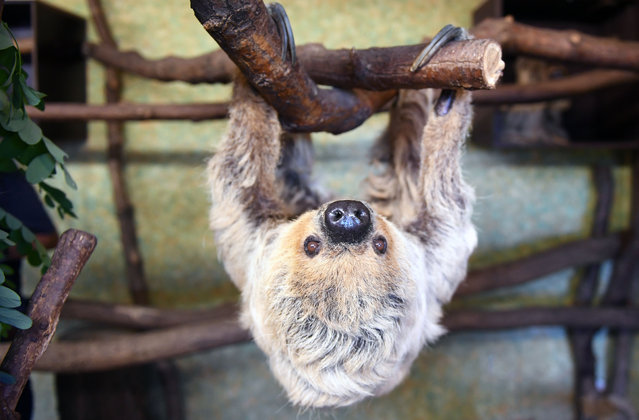 Sloth “Paula” hangs from a branch in her enclosure at the zoo in Halle an der Saale, eastern Germany, on June 14, 2019. The two-toed sloth celebrated her 50th birthday and is, according to the zoo, the oldest sloth of the world. (Photo by Hendrik Schmidt/dpa/AFP Photo) 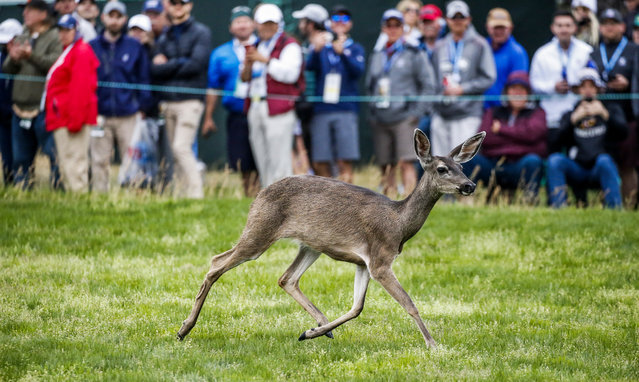 A deer runs along the sixth hole during the third round of the 119th US Open Championship at the Pebble Beach Golf Links in Pebble Beach, California, USA, 15 June 2019. The tournament is being played from 13 June to 16 June. (Photo by Erik S. Lesser/EPA/EFE) 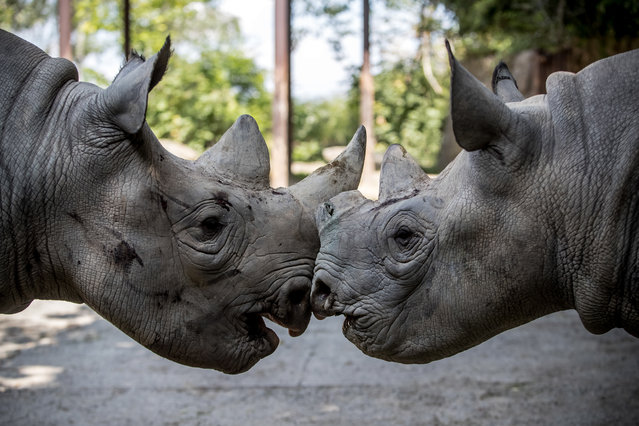 Olmoti (L) and Jasiri (R), black rhinos, play in enclosure at Safari Park in Dvur Kralove nad Labem, Czech Republic, 19 June 2019 (issued 20 June 2019). Three black rhinos (Diceros bicornis michaeli) from Safari Park Dvur Kralove and two black rhinos from other European gardens will set out for Akagera National Park in Rwanda on 23 June. This is the largest rhino transport ever from Europe to Africa, where they should start a new population. All animals are prepared for the trip in Dvur Kralove. The trip will include three rhinos from Dvur, Jasiri, Jasmina and Manny, female Olmoti from the English zoo Flamingo Land and male Mandela from Denmark. These five will find a new home in Akagera National Park, Rwanda, where the last rhinos were seen in 2007. According to Safari Park, only about 700 black rhinos live in the wild. (Photo by Martin Divíšek/EPA/EFE) 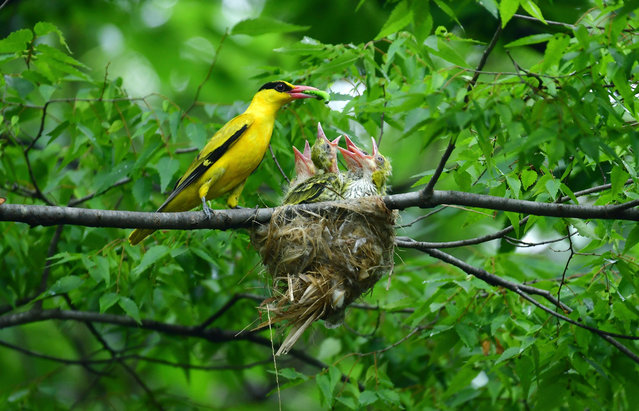 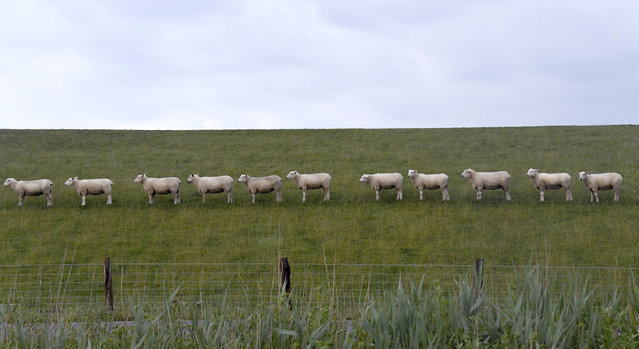 Sheep are lined up on a dike near Buesum, northern Germany, Wednesday, June 19, 2019. (Photo by Carsten Rehder/dpa via AP Photo) 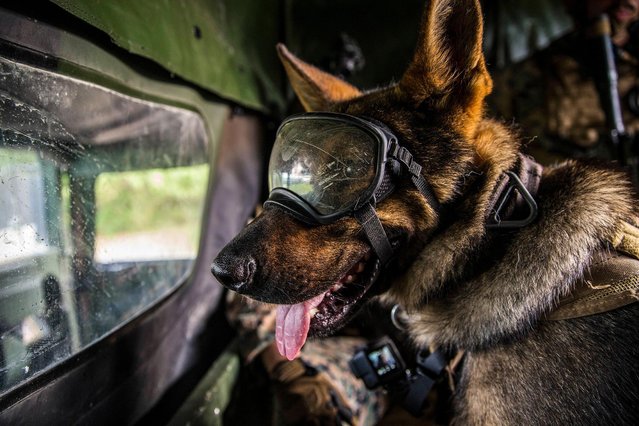 A U.S. Marine Corps military dog, Larry, is prepared to go with the Maritime Raid Force (MRF), 26th Marine Expeditionary Unit (MEU), is prepared to conduct a raid during Realistic Urban Training (RUT) in Camp Lejeune, USA on June 9, 2019. RUT provides an opportunity to train in an unfamiliar, urban environment as the 26th MEU pre-deployment training program. (Photo by U S Marines/ZUMA Wire/Shutterstock) 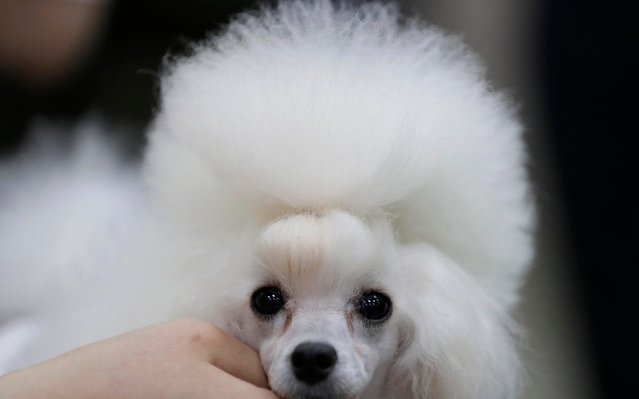 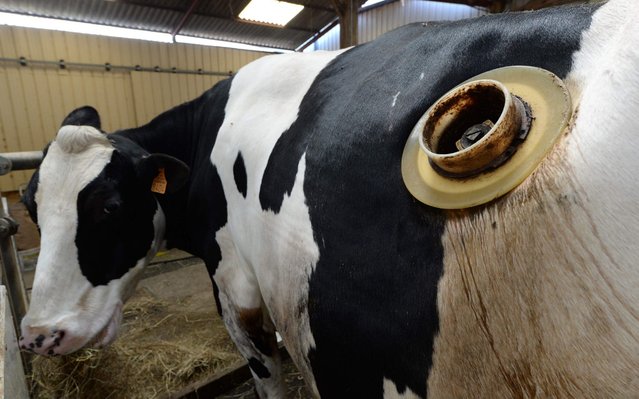 A picture taken on June 21, 2019, shows a cow with a “porthole” surgically inserted into their sides to allow access to their stomach contents, in the research centre owned by Sanders company, a subsidiary of the international French agro-industrial group Avril, near Le Mans, in Saint Symphorien, northwestern France, a day after French animal rights group L214 published a video denouncing the practice. Known as cannulated or fistulated cows, the animals are fitted with a porthole-like device that can be opened, allowing direct access to the largest of their four stomachs in order to optimise and regulate nutrition. The practice has been in use for decades by researchers and the agricultural industry, though it is not widely known to the general public. (Photo by Jean-Francois Monier/AFP Photo) 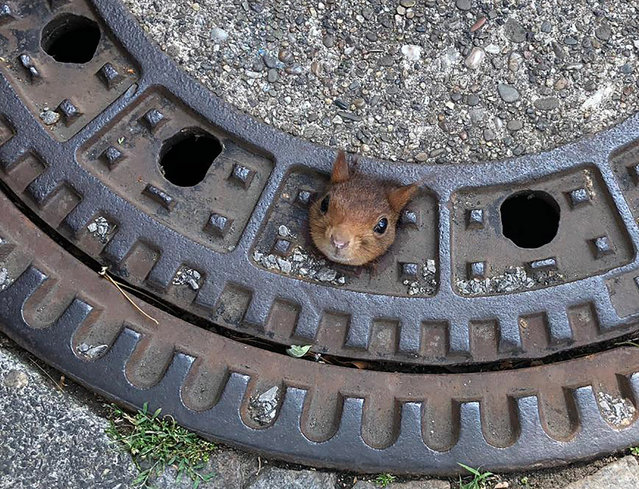 A squirrel stuck in a drain cover in Dortmund, Germany on June 20, 2019. The entire cover had to be removed and taken with the squirrel to a veterinary clinic where the creature was given anaesthetic, freed and treated for neck wounds before it was released back into the wild. (Photo by Feuerwehr Dortmund/AP Photo)
Edit Del
23 Jun 2019 00:03:00, post received 0 comments
Publication archive:
←   →
Popular tags:
All tags
Last searches: