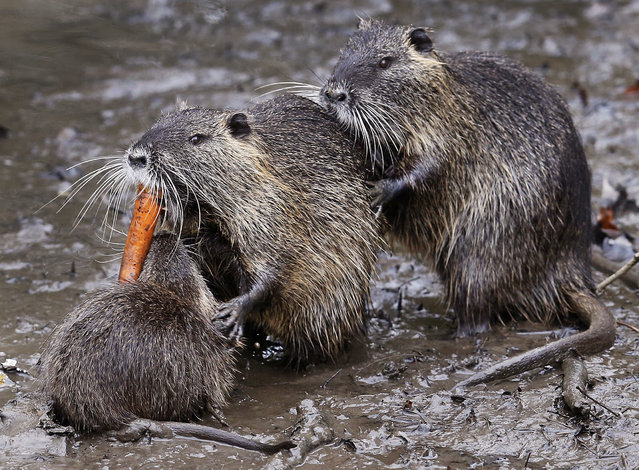 Nutrias fight for a carrot in the mud in a park in Frankfurt, Germany, Thursday, March 22, 2018. (Photo by Michael Probst/AP Photo) 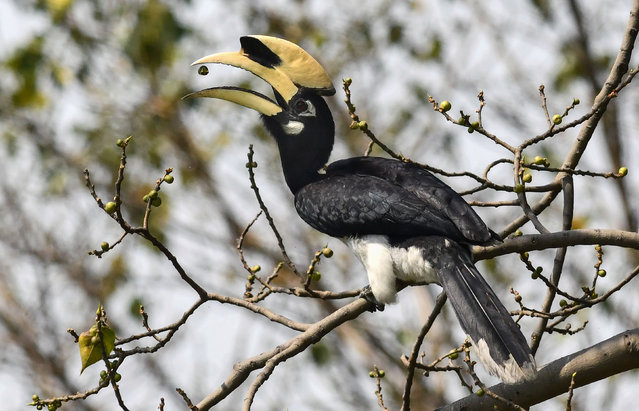 An oriental pied hornbill bird eats a seed as it sits on the branch of a tree in Pobitora village, on the outskirts of Guwahati in India's northeast Assam state, on March 19, 2018. The oriental pied hornbill is one of the most common member of the Asian hornbill family, and is found throughout the Indian subcontinent and across southeast Asia. (Photo by Biju Boro/AFP Photo) 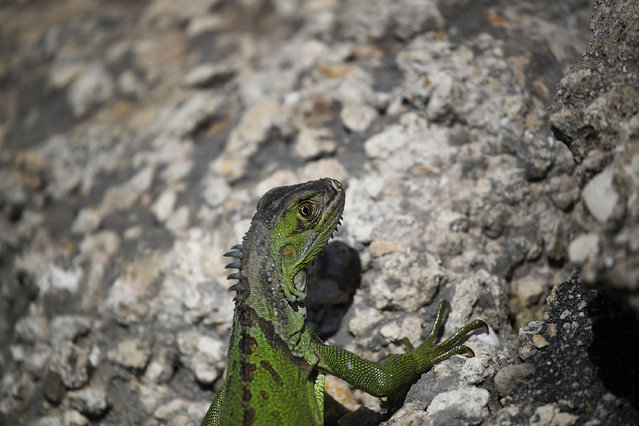 An iguana is seen as the Florida Fish and Wildlife Conservation Commission continues its efforts to try and control the invasive species on March 13, 2018 in Miami, Florida. The commission has teams of people that are trying to eliminate the reptiles by killing them, which would prevent them from eating native plants and wildlife as well as disturbing the natural Florida habitat that they are living in. (Photo by Joe Raedle/Getty Images) 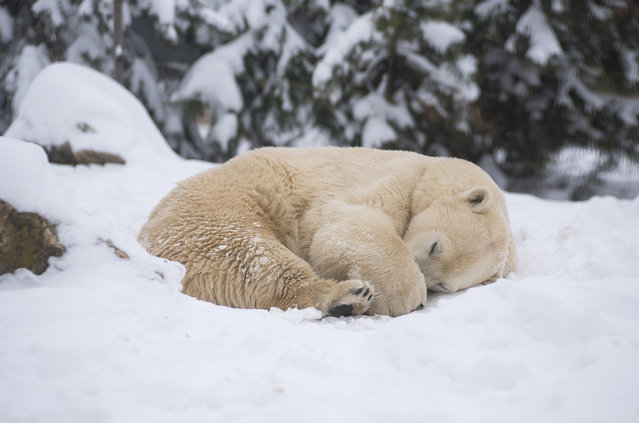 A polar bear curls up in the fresh snow in its enclosure in Sosto Zoo in Nyiregyhaza, Hungary, Sunday, March 18, 2018. (Photo by Attila Balazs/MTI via AP Photo) 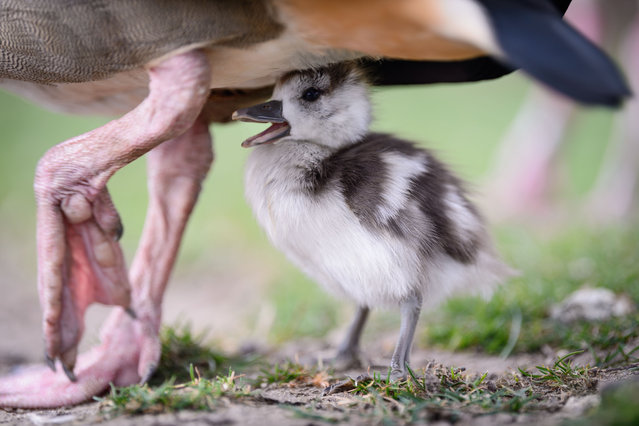 A young Nile goose hides under its mother in Stuttgart, southern Germany on March 19, 2018. (Photo by Sina Schuldt/AFP Photo) 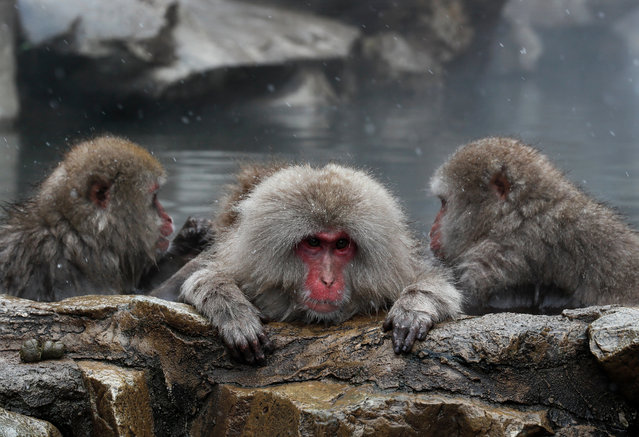 Japanese Macaque monkeys soak in the warmth of mountain hotsprings at Jigokudani Monkey Park, in Yamanouchi, central Japan, 21 March 2018. The Japanese Macaques (Macaca fuscata), also referred to as Snow Monkeys, live freely in this area that is covered by snow one third of the year. Jigokudani is the only known place in the world where monkeys bathe in natural hot springs. As a habit, they come down from the mountains where they spend the night and bath during the day. The monkeys can be viewed live on the internet. (Photo by Kimimasa Mayama/EPA/EFE) 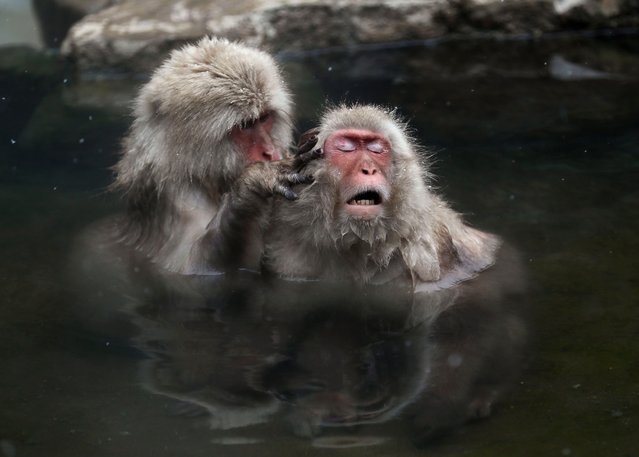 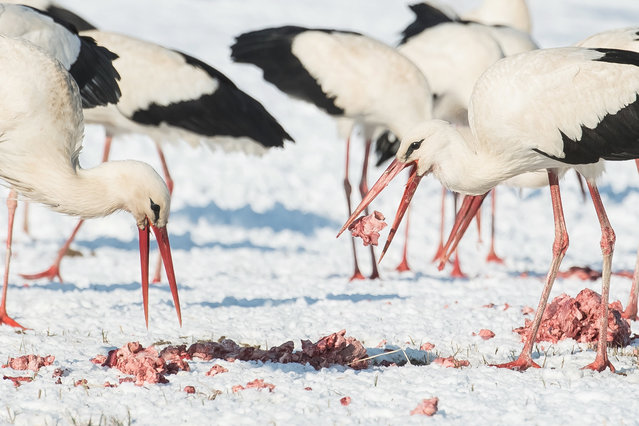 Storks feed on a meadow in the village of Targowisko, central Poland, 23 March 2018. A flock of nearly 200 storks stay already for several days in the village due lack of strenght and lack of food to countinue their flight. Residents of the villages and nearby towns feed birds to help them survive hard conditions, as spring didn't come to Poland yet and in some regions there is still snow. (Photo by Wojciech Pacewicz/EPA/EFE) 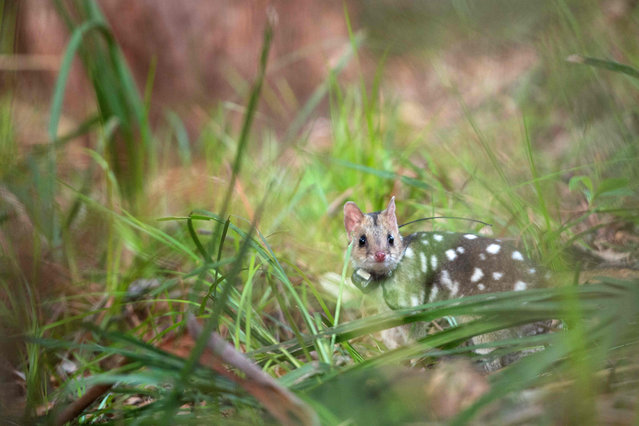 In this handout from WWF- Australia taken on March 13, 2018, an eastern quoll takes its first steps into the wild during a translocation in Jervis Bay in northern New South Wales. A species of quoll devastated by foxes has been returned to the wild in mainland Australia for the first time in almost 50 years in a rare conservation success story. (Photo by Morgan Cardiff/AFP Photo) 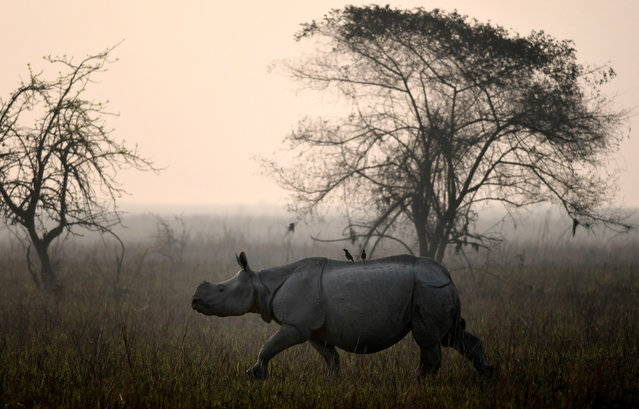 A one horned Rhino roams during the Rhino census inside the Pobitora Wild Life Sanctuary in Morigaon district of Assam state, India, 18 March 2018. Pobitora has the highest density of one horned Rhino population in the world, presently numbering about 93 according to 2012 census in just 38.8 Sq. km. area. The Rhino census for the year 2018 has been conducted with the help of elephants and on foot where about 70 forest officials including NGO members took part. (Photo by EPA/EFE/Stringer) 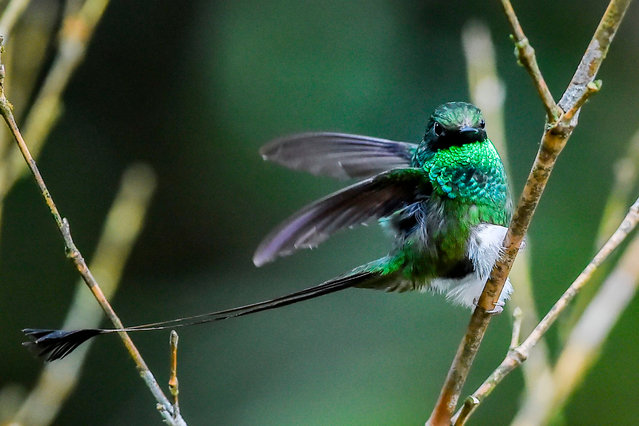 A booted racket- tail hummingbird (Chlorophanes spiza) is photographed at the Cloud Forest of San Antonio, in the rural area of Cali, department of Valle del Cauca, Colombia, on March 1, 2018. With over 1,900, Colombia is the country with the largest number of bird species in the world. (Photo by Luis Robayo/AFP Photo) 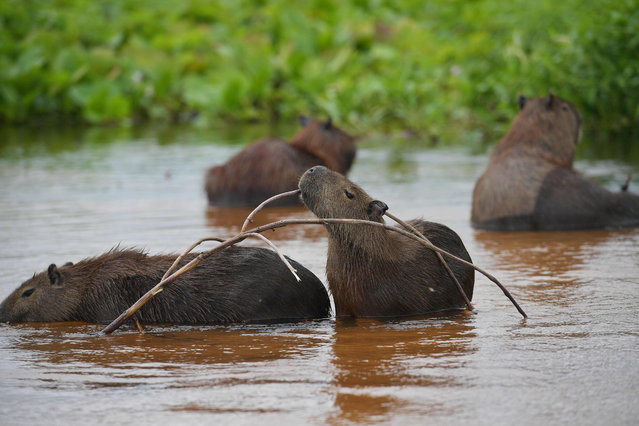 A family of Capybaras (Hydrochoerus hydrochaeris) is pictured, at the Pantanal wetlands, in Mato Grosso state, Brazil on March 7, 2018. The Pantanal is the largest wetland on the planet located in Brazil, Bolivia and Paraguay, covers more than 170,500 km2 and is home to more than 4,000 species of plants and animals. This ecosystem is at risk of collapsing if the rivers' headwaters are not protected from the advance of monoculture plantations, waterways, hydroelectric plants and deforestation warn scientists and activists. (Photo by Carl de Souza/AFP Photo) 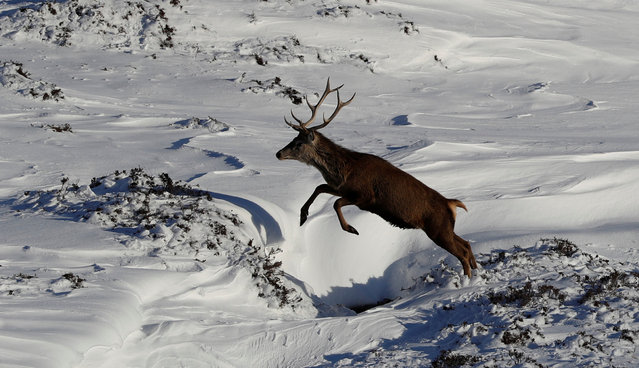 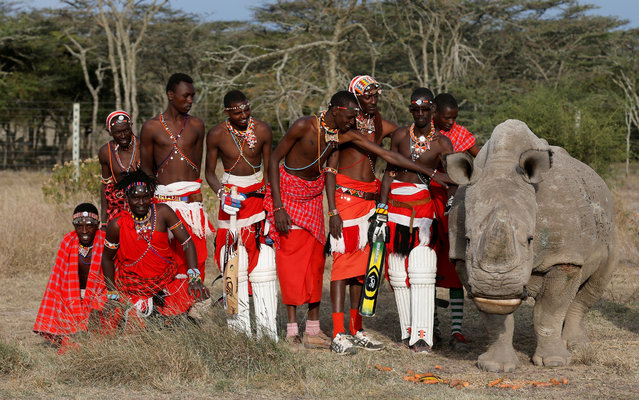 World's last male northern white rhino dies. A statement from the Ol Pejeta Conservancy in Kenya says the 45-year-old rhino was euthanised on Monday after “age-related complications” had “worsened significantly” and he was no longer able to stand. Sudan had been part of an ambitious effort to save the subspecies from extinction with the help of the two surviving females. The rhinoceros had previously lived at the Dver Kralove Zoo in the Czech Republic before being transported to Ol Pejeta Conservancy, about 250 km (155 miles) north of Nairobi, where he lived with the last two females of the same species, 27-year old Najin and 17-year old Fatu. The world's last male northern white rhino has died, leaving only two females of its subspecies alive in the world. Here: Members of the Maasai Cricket Warriors pose for a photograph with the last surviving male northern white rhino named “Sudan”, June 2017. (Photo by Thomas Mukoya/Reuters) 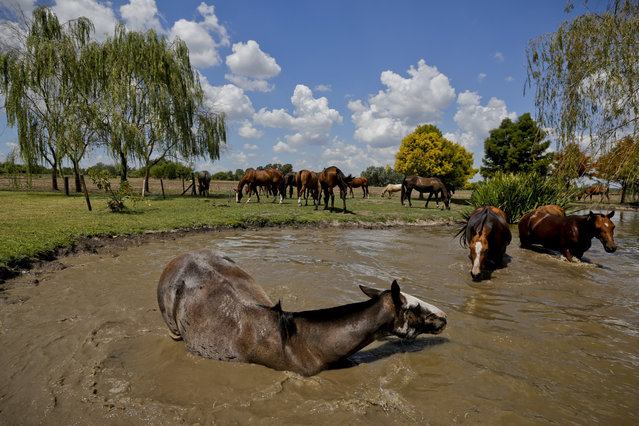 In this February 27, 2018 photo, a group of ponies neighed and splashed on a pond cooling off after a polo game at La Carona club, Capilla del Senor, Buenos Aires province, Argentina. “Polo is played in the countryside a lot and in a much more informal way”, said Juan Pablo Alessandrini, spokesman for Argentina's Polo Association. (Photo by Victor R. Caivano/AP Photo) 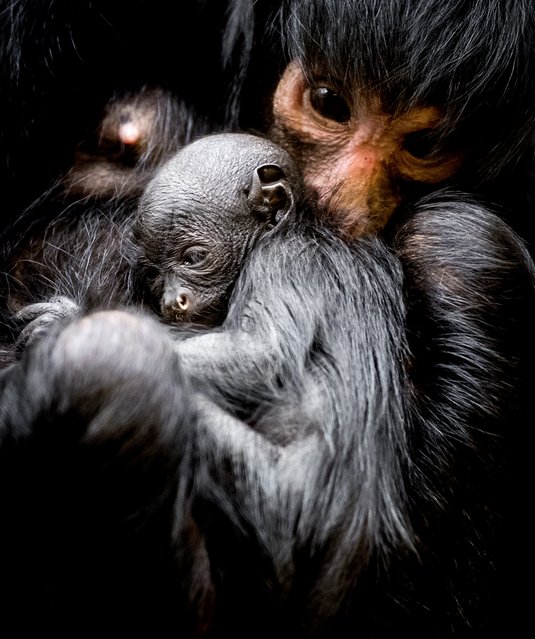 A picture taken on March 16, 2018 shows a newborn black spider monkey at the Artis Zoo in Amsterdam. The young was born on 13 March, its gender is still unknow. (Photo by Koen van Weel/AFP Photo/ANP) 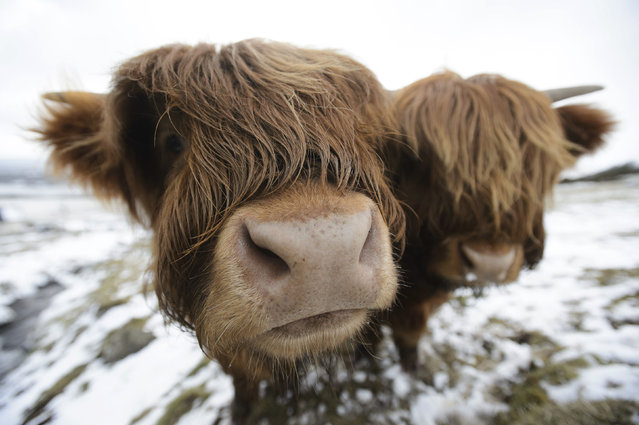 Highland cows are photographed as they graze in the Kilpatrick Hills near Glasgow, Scotland, Sunday March 18, 2018, as the cold snap keeps a grip of the UK. (Photo by John Linton/PA via AP Photo) 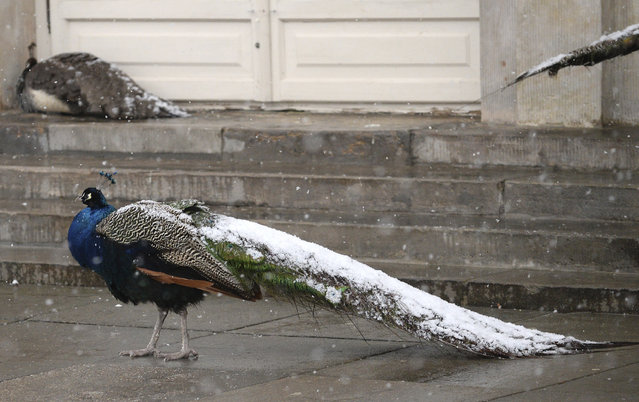 A peacock with its tail covered with snow walks in Lazienki park in Warsaw, Poland, Friday, March 16, 2018, as snow came down in the city in a sudden return of winter weather with the temperature minus 3 degree Celsius (26.6 Fahrenheit). (Photo by Alik Keplicz/AP Photo) 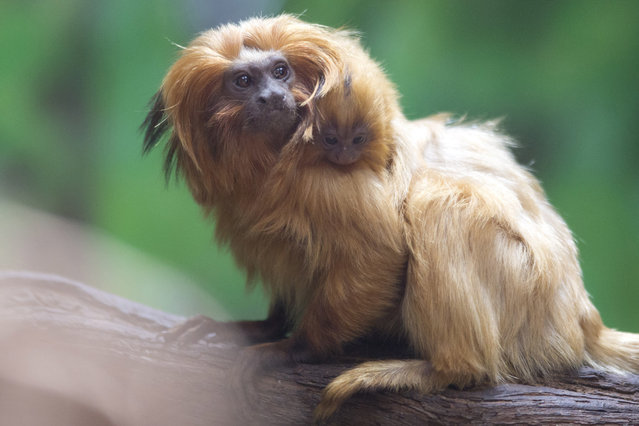 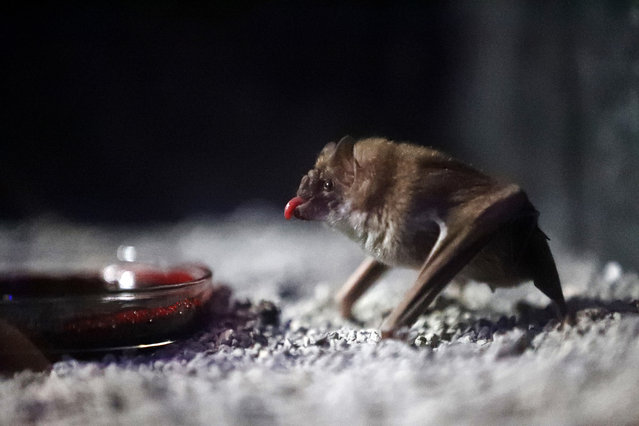