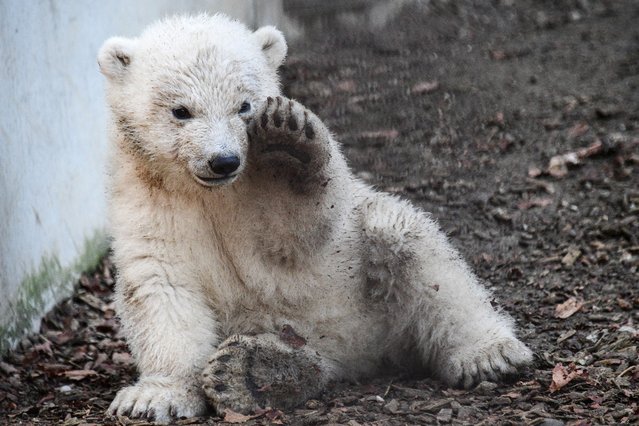 A polar bear cub named Kara, plays in its enclosure at the Zoological and Botanical park in Mulhouse, eastern France, on February 25, 2021. The polar bear cub, who makes its first steps outside, was born in November 2020. (Photo by Sebastien Bozon/AFP Photo) 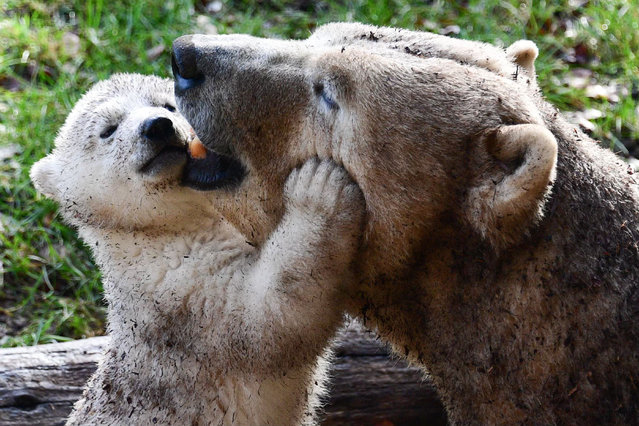 A polar bear named Sessi and its cub, Kara, are seen in their enclosure at the Zoological and Botanical park in Mulhouse, eastern France, on February 25, 2021. (Photo by Sebastien Bozon/AFP Photo) 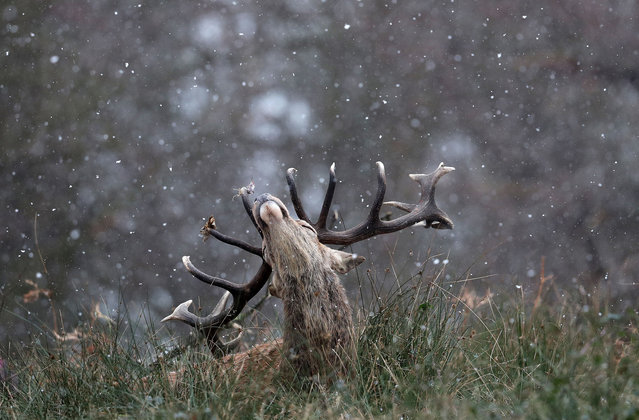 A stag is seen in the snow in Richmond Park on February 09, 2021 in London, England. A Met Office Weather Warning remains in place for many parts of the UK. (Photo by Chris Jackson/Getty Images) 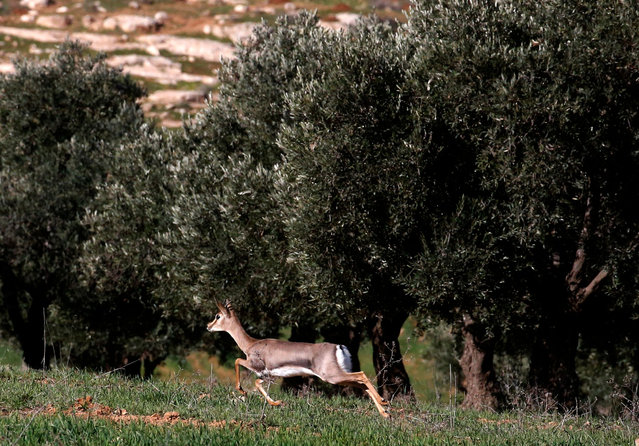 A deer runs past olive trees in a field on the outskirts of the occupied West Bank town of Hebron on February 10, 2021. (Photo by Hazem Bader/AFP Photo) 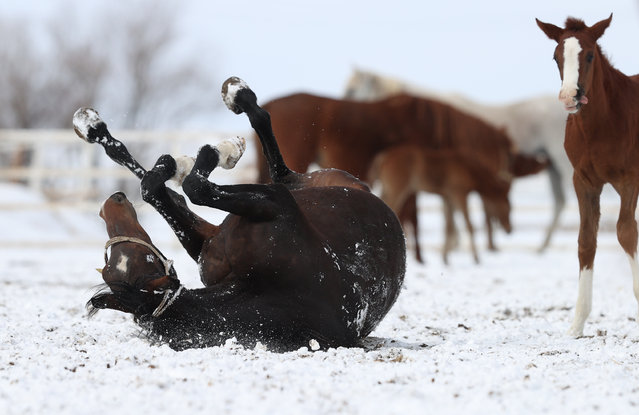 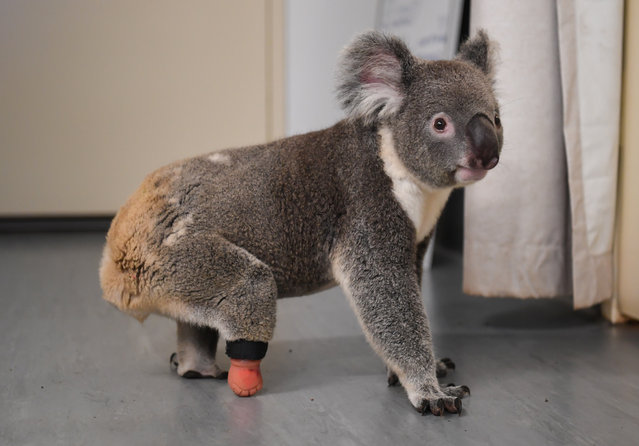 Triumph the koala exploring the vet clinic at Friends of the Koala with his new prosthetic limb attached to his right foot on February 24, 2021 in Lismore, Australia. Triumph the koala was taken into care in 2017 after being found with his dying mother on a property in Lismore in northern New South Wales. Vets soon discovered Triumph's missing foot, a birth defect that affected his ability to move and sometimes caused him pain. After a long search by Triumph's carers at Friends of the Koala for someone who could successfully make a prosthetic koala foot, the solution came from a local prosthetic dentist in Lismore, Jon Doulman, who took a cast of Triumph's stump and created a prosthetic boot-like attachment made from rubber and attached with velcro. The five-year-old koala was recently fitted with his new foot, and immediately began grooming, climbing and crawling with the prosthetic in place. (Photo by James D. Morgan/Getty Images) 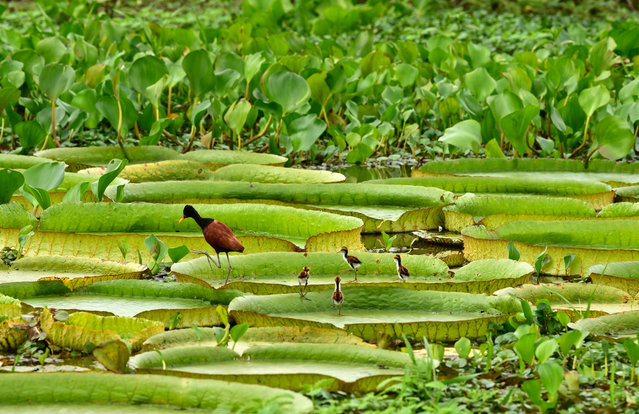 View of birds on Victoria cruzianas – species of the Nymphaeaceae family of water lilies – (Yacare Yrupe in Guarani), which appear every three to four years in great numbers and size in the Paraguay River, in Piquete Cue, north of Asuncion, on February 11, 2021. (Photo by Norberto Duarte/AFP Photo) 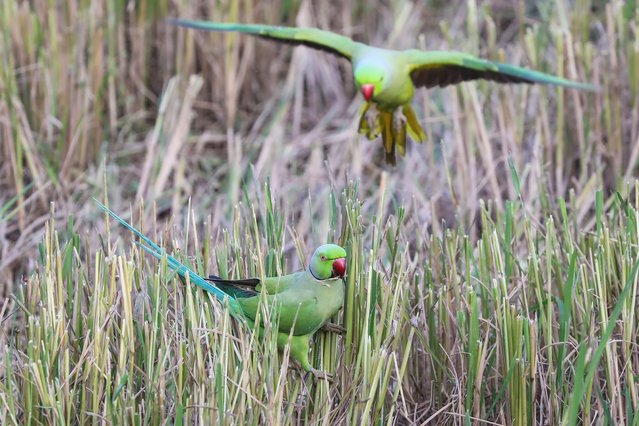 Two rose-ringed parakeets (Psittacula krameri), also known as the ring-necked parakeet, search for food on a paddy field in the suburbs of​ Colombo, Sri Lanka, 11 February 2020. (Photo by Chamila Karunarathne/EPA/EFE) 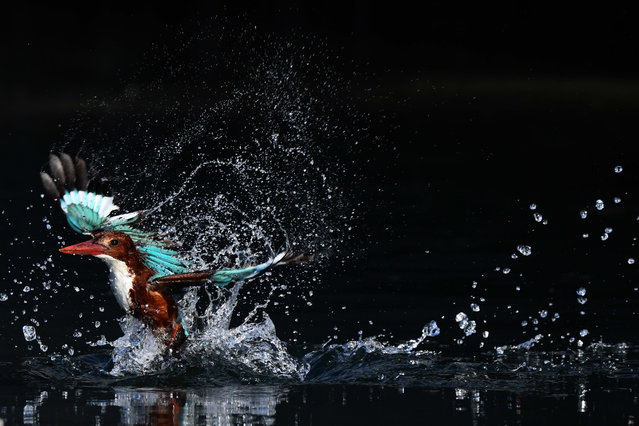 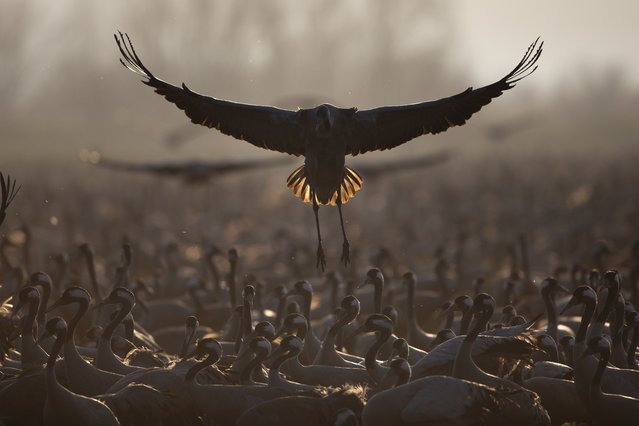 Migrating Cranes flock at the Hula Lake conservation area, north of the Sea of Galilee, in northern Israel, Wednesday, February 24, 2021. More than half a billion birds of some 400 different species pass through the Jordan Valley to Africa and go back to Europe during the year. (Photo by Oded Balilty/AP Photo) 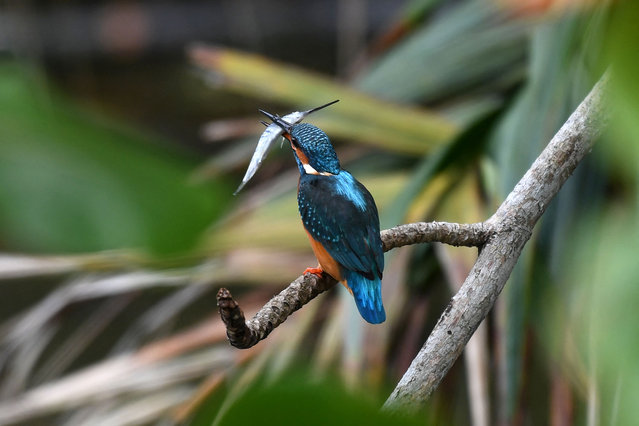 A common kingfisher feeds on fish at Pasir Ris Park in Singapore on February 24, 2021. (Photo by Roslan Rahman/AFP Photo) 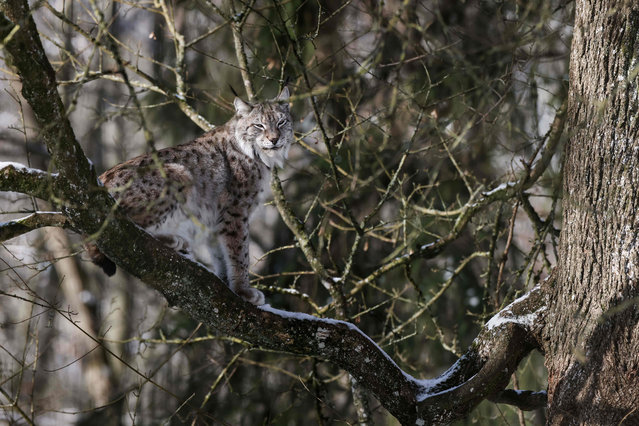 A picture taken on February 10, 2021 shows a lynx sitting on a branch at the Domaine des Grottes de Han Wildlife Park and touristic site in Han-sur-Lesse, Belgium. Animal parks will reopen to public in Belgium on February 13, 2021, after months of closure due to the new coronavirus pandemic. (Photo by Kenzo Tribouillard/AFP Photo) 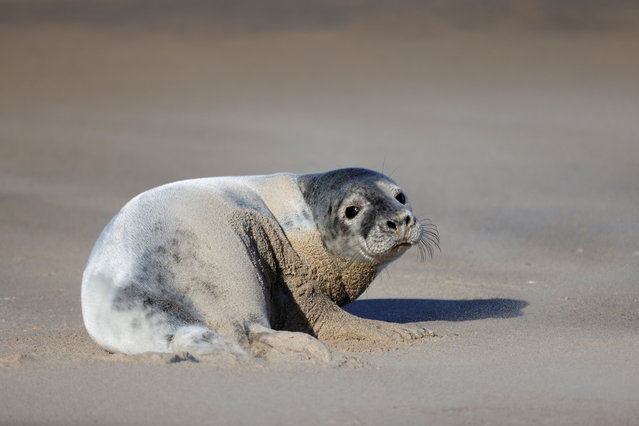 A grey seal rests on a sandbank close to Walde lighthouse in Marck near Calais, France, February 13, 2021. (Photo by Pascal Rossignol/Reuters) 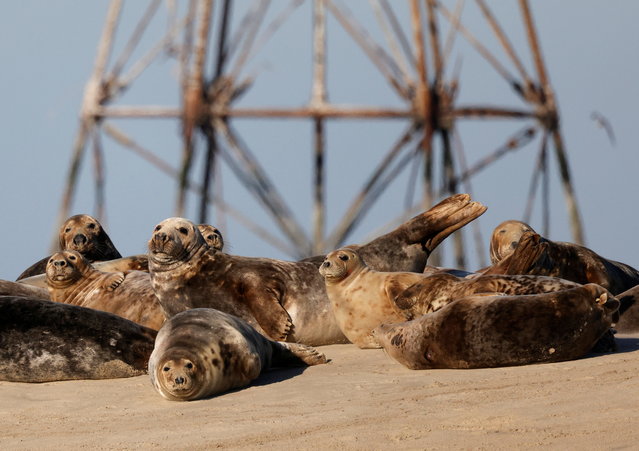 Grey seals rest on a sandbank close to Walde lighthouse in Marck near Calais, France, February 13, 2021. (Photo by Pascal Rossignol/Reuters) 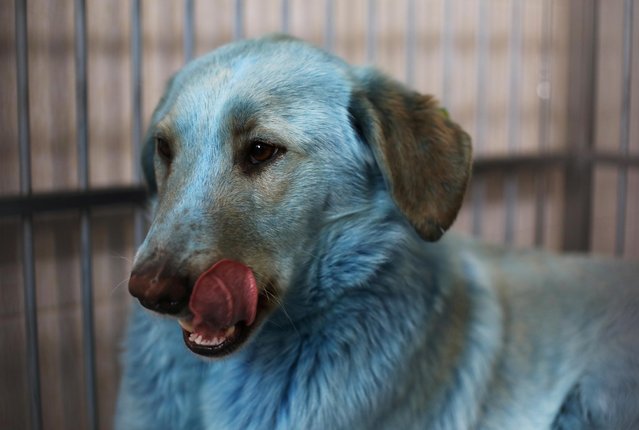 A dog with blue fur is pictured inside a cage at a veterinary hospital where it was taken for examination in Nizhny Novgorod, Russia on February 16, 2021. The pack of stray dogs with blue fur was found earlier this month near an abandoned chemical plant in the city of Dzerzhinsk. (Photo by Anastasia Makarycheva/Reuters) 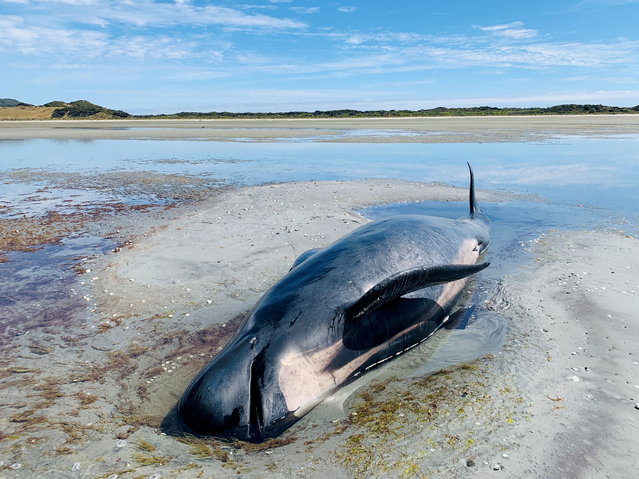 A beached whale is seen along the Farewell Spit on the South Island, New Zealand on February 22, 2021 in this picture obtained from social media. (Photo by Marion Sutton/Reuters) 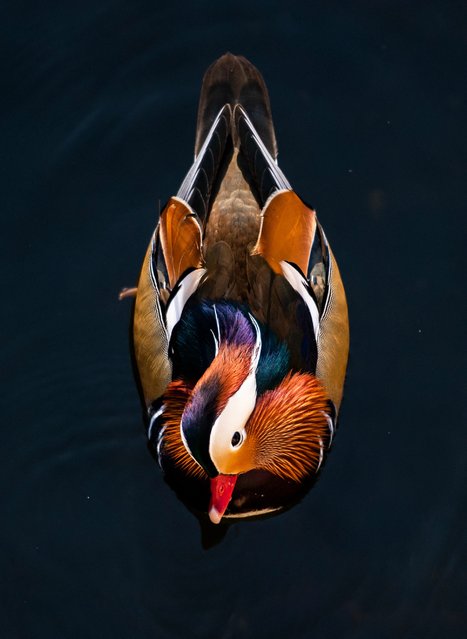 A male Mandarin duck peers upwards as he swims in the Landwehr canal in Berlin on February 14, 2021. (Photo by John Macdougall/AFP Photo) 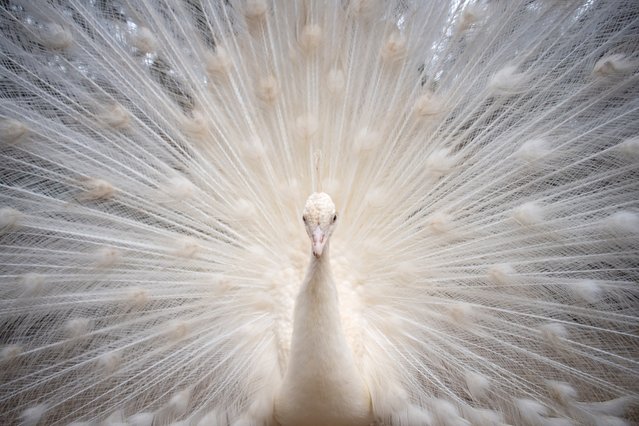 A white peacock is pictured at the Animal Rescue Center Zoo de Castellar, in Castellar de la Frontera, southern Spain, on February 20, 2021. The Animal Rescue Center which has opened to the public after a 7 months closure due to coronavirus restrictions, relays on food donations to feed the animals. 60% of the animals at the zoo were rescued from seizures by the Spanish Civil Guard and customs services against animal traffickers and circuses. (Photo by Jorge Guerrero/AFP Photo) 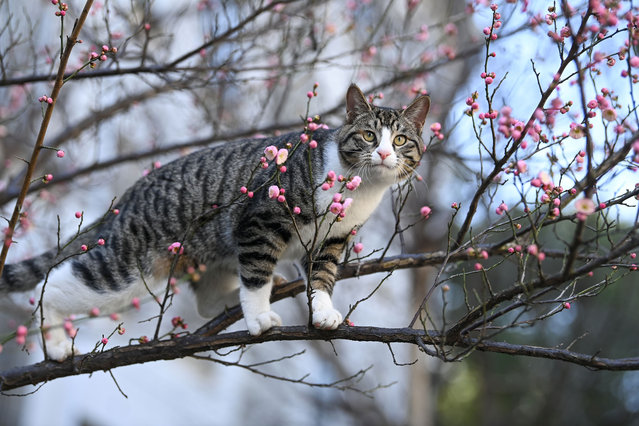 A cat sits on a plum tree at a park on February 7, 2021 in Kunshan, Jiangsu Province of China. (Photo by Wang Xuzhong/VCG via Getty Images) 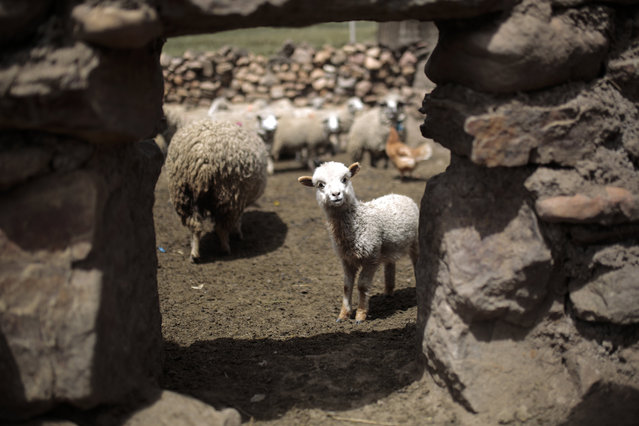 A sheep walks inside a pen during the Andean traditional celebration for 'Martes de Challa' as part of the Carnival festivities on February 16, 2021 in Pizacaviña, La Paz, Bolivia. “Martes de Challa” (Ch'alla Tuesday) is one of the most important traditions in Bolivia to thank the Pachamama (Mother Earth) celebrated on the last day of Carnival. (Photo by Gaston Brito Miserocchi/Getty Images) 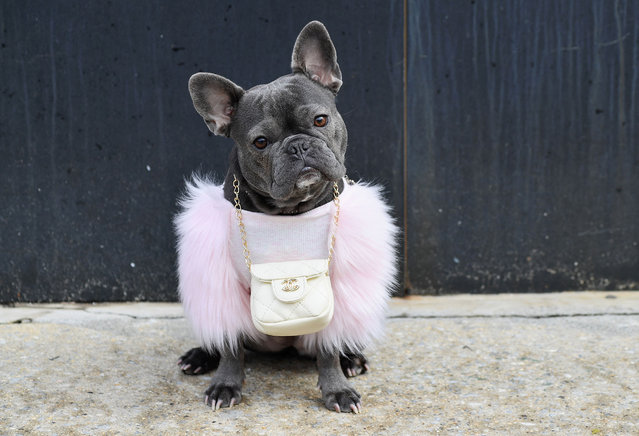 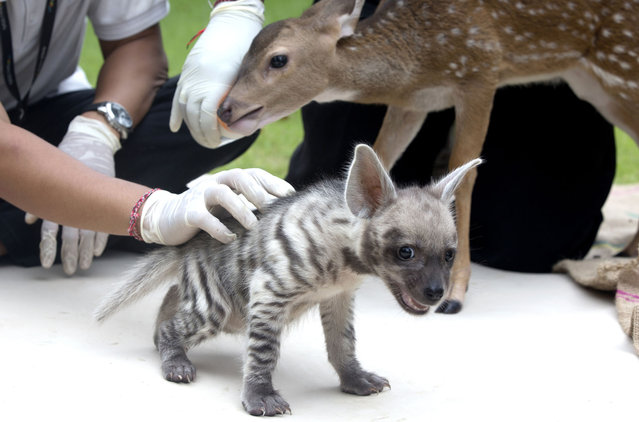