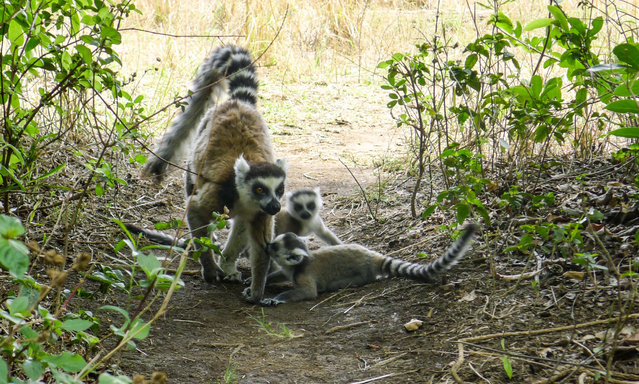 Lemurs are seen at the Isalo National Park, in the Ihorombe Region of Madagascar on November 5, 2016. .More than 150 scientists are gathering in Abidjan from July 25 until July 27, 2017 to create an African Society of primatology. In Madagascar, 85% of lemurs are threatened to disappear, according to Inza Kona, a professor and director of the research and development Swiss centre for scientific researches in Ivory Coast. (Photo by Janine Haidar/AFP Photo) 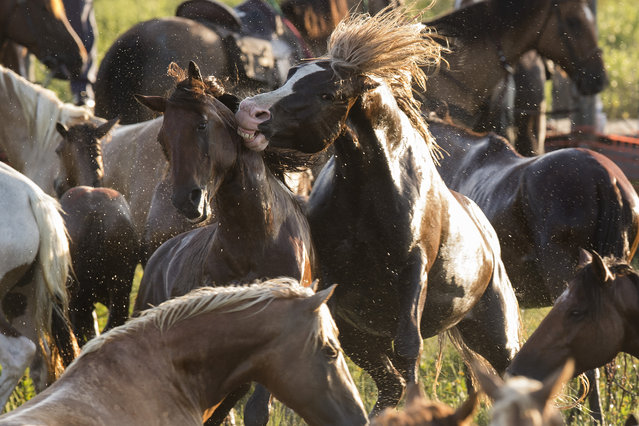 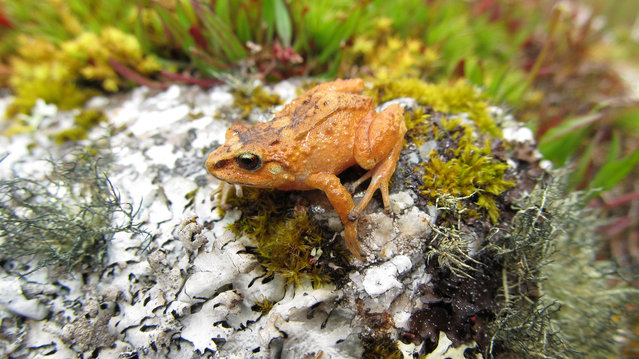 An undated handout photo made available by the University of Michigan shows a specimen of 'cutin of mountain' frog, a new species found in the forest area of Pui Pui near the center of Toldopampa, in the Andean region of Junin, Peru. The discovery of three new species of frogs in the protected forest of Pui Pui, in the Andean zone of the central jungle of Peru, confirms this natural area as one of the richest in biological diversity of the Peruvian Andes. (Photo by Rudolf von May/EPA/University of Michigan) 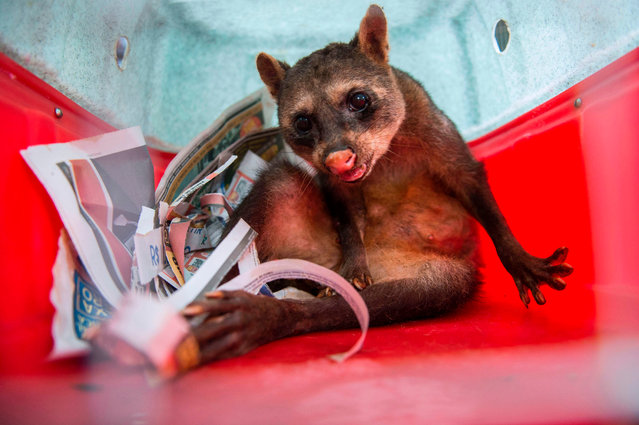 Ariel, an old raccoon, is transported in a cage to the Ibama' s Animal Recovery Center in Seropedica, state of Rio de Janeiro, Brazil on July 18, 2017. Wild animals recovered from illegal trade are treated at the Animal Recovery Center of Ibama (Brazilian Institute of Environment and Renewable Natural Resources) in the city of Seropedica, about 80 km from Rio de Janeiro. Ibama' s proposal is to return them to nature, but many have poor health conditions or are used to human presence, which makes difficult or even impossible to return them to wilderness. (Photo by Mauro Pimentel/AFP Photo) 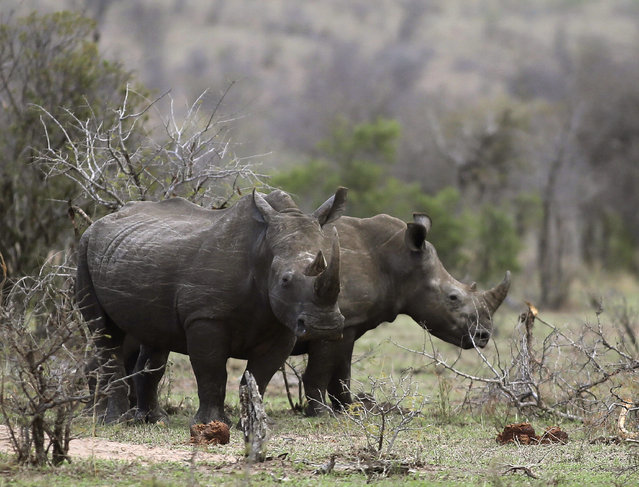 In this October 1, 2016, file photo, rhinos graze in the bush on the edge of Kruger National Park in South Africa. South Africa's government said Monday July 24, 2017, is moving ahead with draft regulations for a domestic trade in rhino horn, despite critics' concerns that a legal market will spur rhino poaching. (Photo by Denis Farrell/AP Photo) 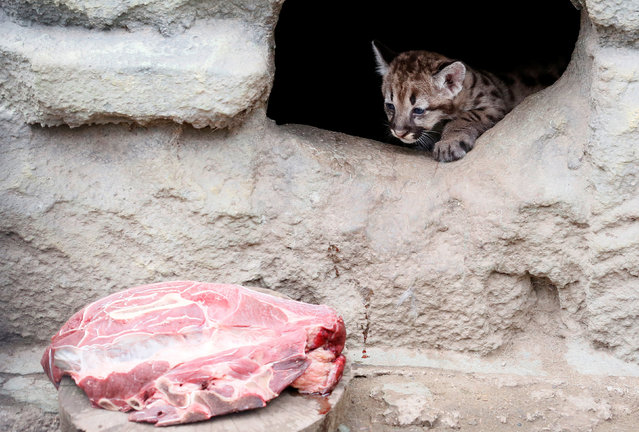 A one-month-old North American cougar cub looks at a slab of meat at the Royev Ruchey zoo in a suburb of the Siberian city of Krasnoyarsk, Russia, July 26, 2017. (Photo by Ilya Naymushin/Reuters) 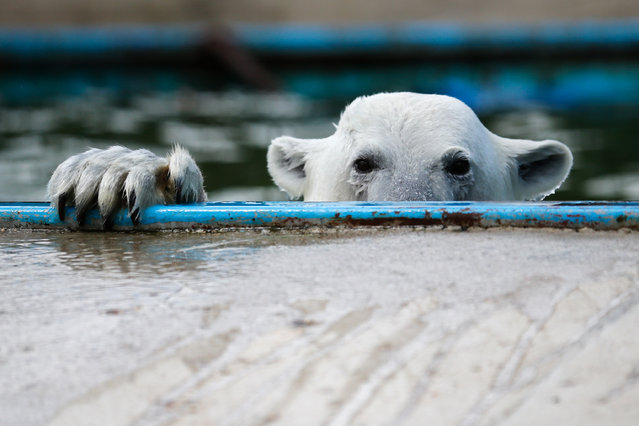 A Polar bear swims in a pool at the center of reproduction of rare species of animals at the Moscow Zoo in the village of Sychevo, Moscow Region on July 24, 2017. (Photo by Maxim Zmeyev/AFP Photo) 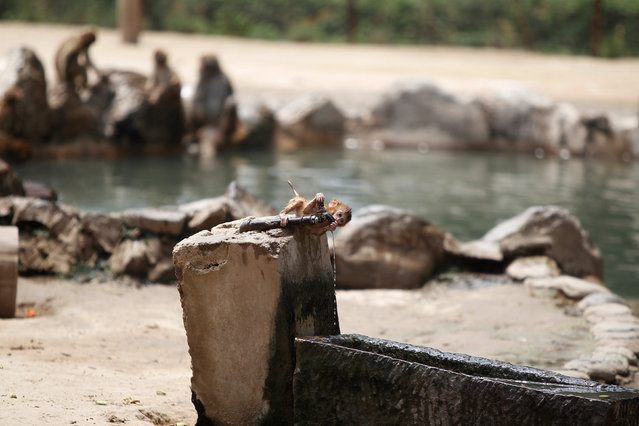 A baby macaque monkey drinks water from a tap on a hot day at a zoo in Zhengzhou, Henan province, China July 24, 2017. (Photo by Reuters/China Stringer Network) 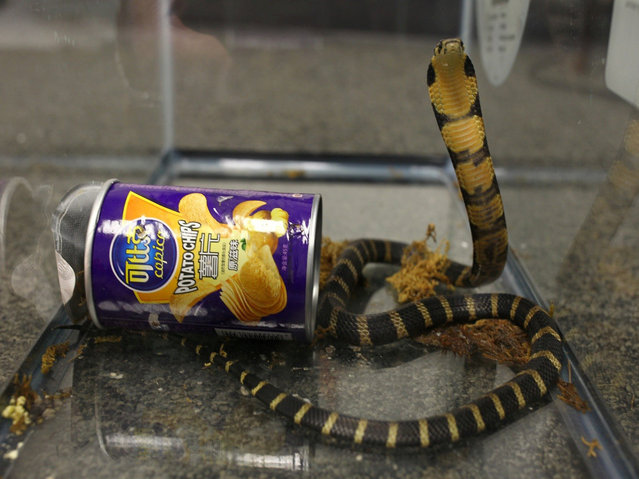 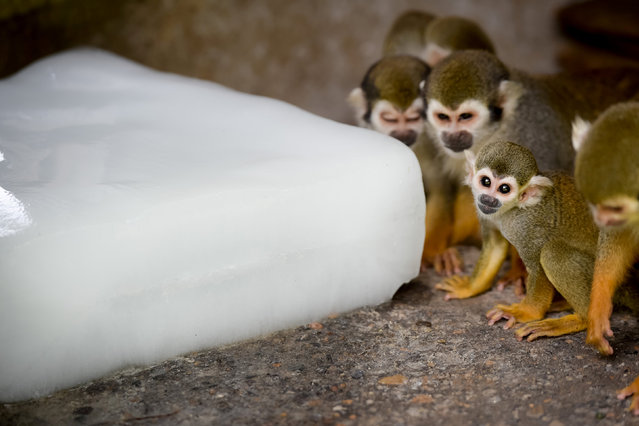 Macaque monkeys cool off with an ice block on a hot day at a zoo in Hefei, Anhui province, China July 25, 2017. (Photo by Zhang Yazi/Reuters/CNS) 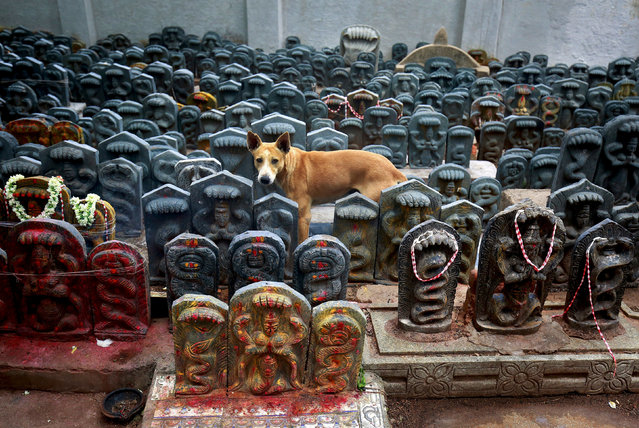 A stray dog stands amidst consecrated idols of snakes during the Hindu festival of Nag Panchami, which is celebrated by worshipping snakes to honour the serpent god, inside a temple on the outskirts of Bengaluru, India, July 27, 2017. (Photo by Abhishek N. Chinnappa/Reuters) 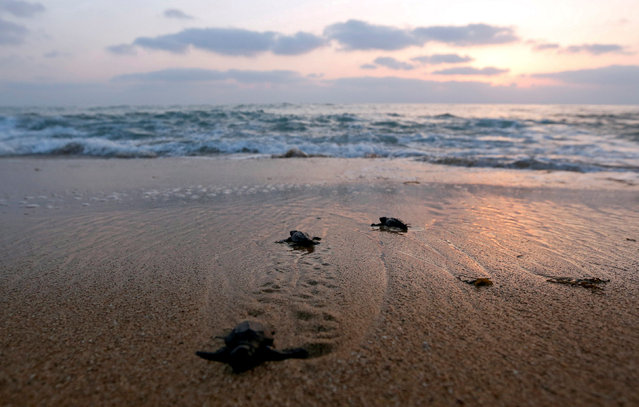 Baby sea turtles crawl to the sea at a seashore in El-Mansouri village, near the southern city of Tyre, Lebanon July 24, 2017. (Photo by Jamal Saidi/Reuters) 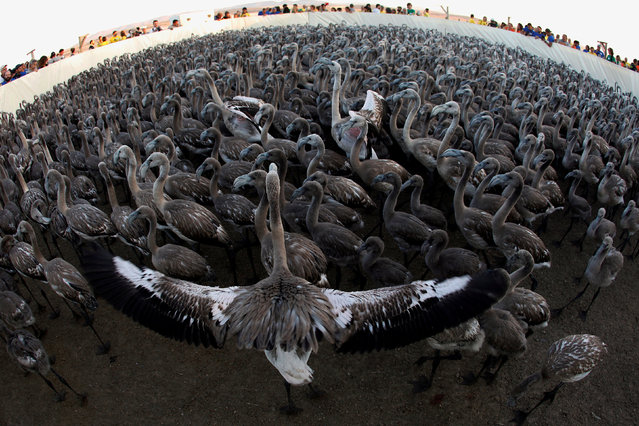 Volunteers stand around flamingo chicks gathered in a corral before being fitted with identity rings at dawn at a lagoon in the Fuente de Piedra natural reserve, near Malaga, southern Spain, July 29, 2017. (Photo by Jon Nazca/Reuters) 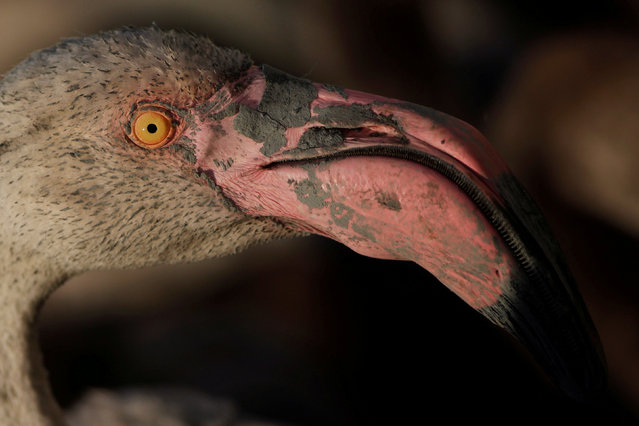 A flamingo is seen in a corral before being fitted with an identity ring at a lagoon in the Fuente de Piedra natural reserve, near Malaga, southern Spain, July 29, 2017. (Photo by Jon Nazca/Reuters) 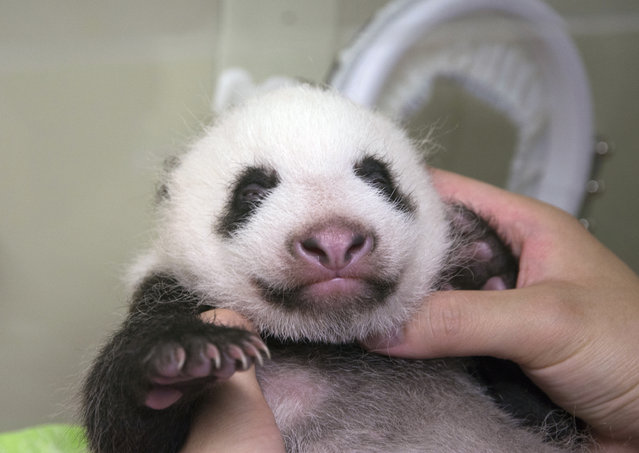 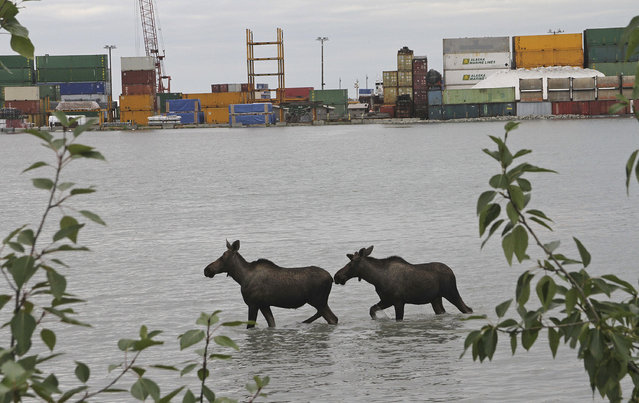