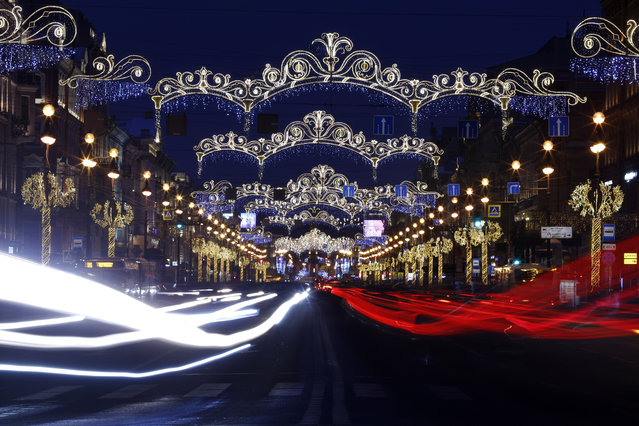 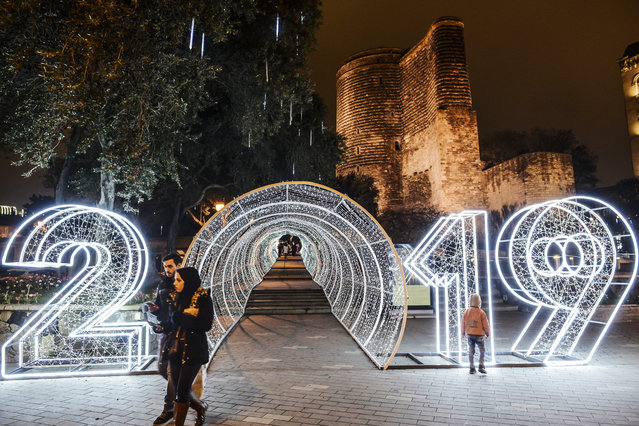 People walk past a “2019” new year decorations in front of the Maiden Tower in the Old city in central Baku, Azerbaijan on December 22, 2018. (Photo by Tofik Babayev/AFP Photo) 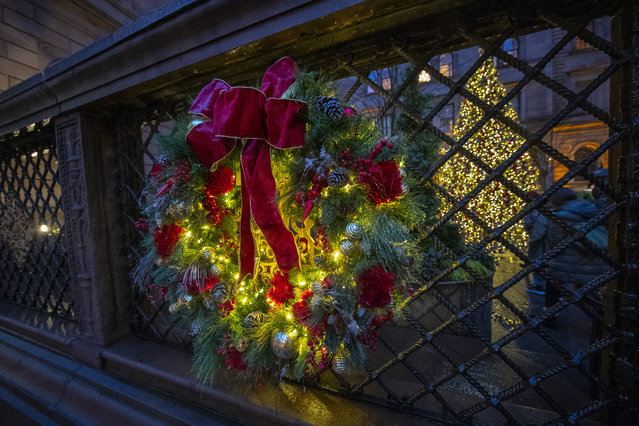 A wreath hangs on the outer wall leading to the courtyard of the Lotte New York Palace in midtown Manhattan on December 19, 2018. (Photo by Gordon Donovan/Yahoo News) 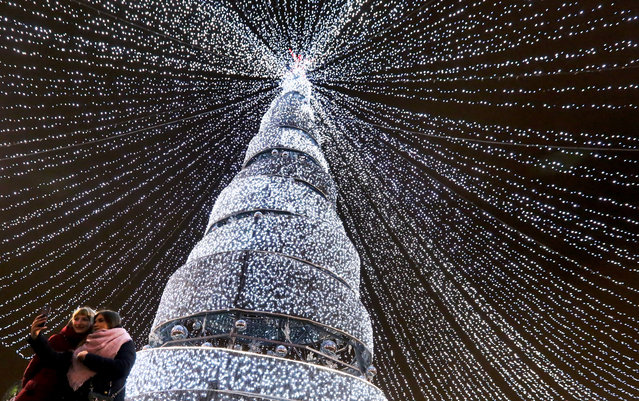 People take a photo near an illuminated New Year tree in the downtown of Minsk, Belarus, 27 December 2018. (Photo by Tatyana Zenkovich/EPA/EFE) 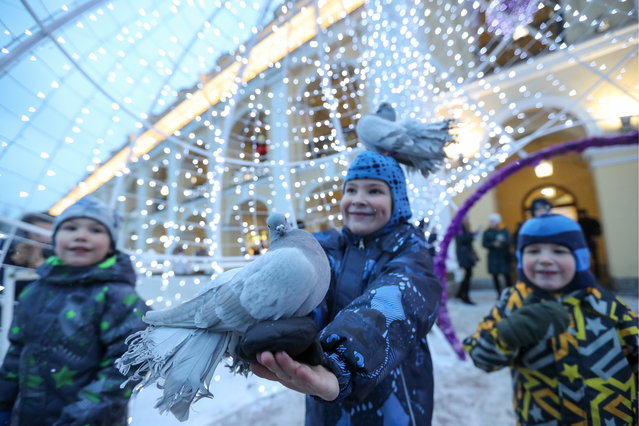 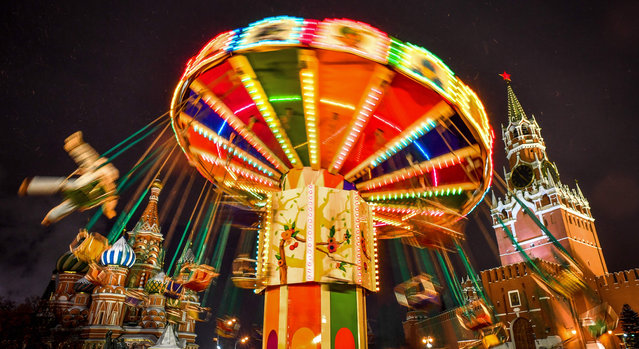 A carousel rotates at the Christmas and New Year market near the Saint Basil Cathedral (L) and Spasskaya tower (R) on the Red Square in central Moscow on December 20, 2018. (Photo by Yuri Kadobnov/AFP Photo) 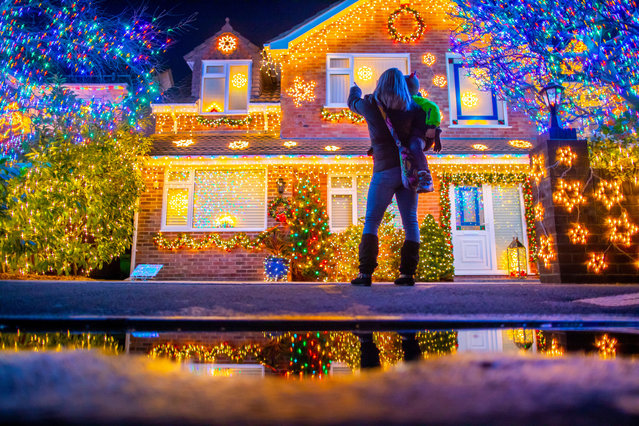 Christmas lights are displayed on houses in Trinity Close in Burnham-on-Sea, Somerset, UK on December 3, 2018. For over 10 years the residents of Trinity Close have decorated their homes and gardens with more than a 100,000 colourful Christmas lights. The residents display aims to raise money for local charities and will run until early January. (Photo by Brad Wakefield/Rex Features/Shutterstock) 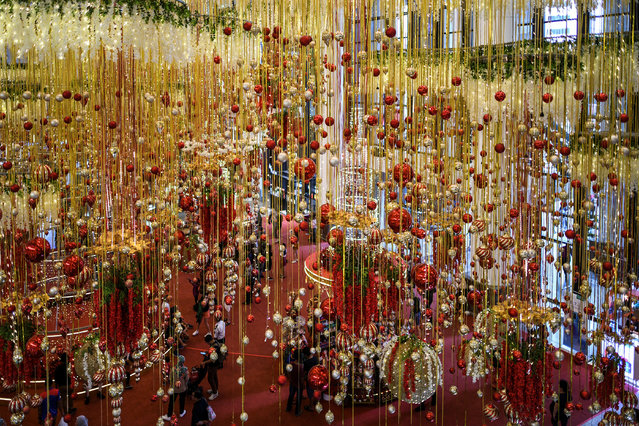 People walk at a shopping mall in Kuala Lumpur filled with Christmas decorations on December 17, 2018. (Photo by Mohd Rasfan/AFP Photo) 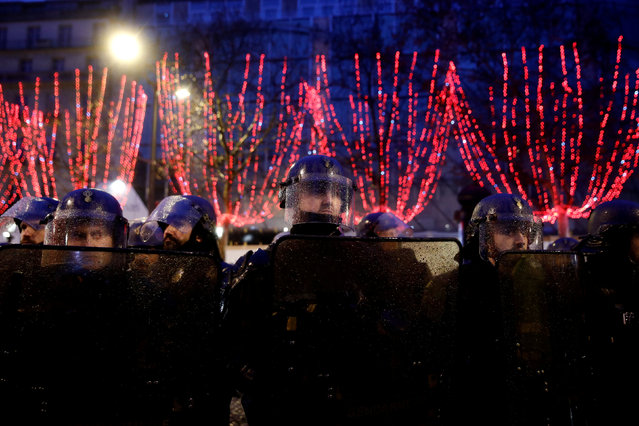 French gendarmes stand guard during a demonstration by the “yellow vests” movement in Paris, France, December 15, 2018. (Photo by Gonzalo Fuentes/Reuters) 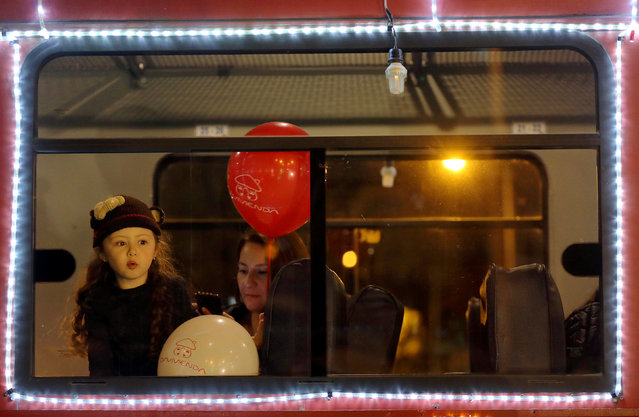 A girl looks through a window of the tourist train “La Sabana” decorated with Christmas lights in Bogota, Colombia on December 11, 2018. (Photo by Luisa Gonzalez/Reuters) 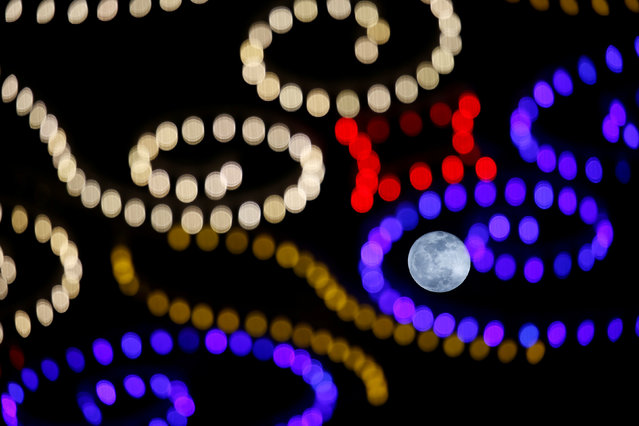 The rising full moon is seen behind Christmas lights in Valletta, Malta on December 23, 2018. (Photo by Darrin Zammit Lupi/Reuters) 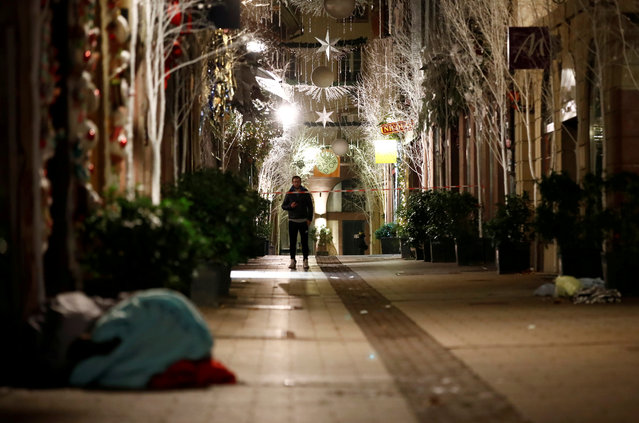 A man walks along a deserted Rue des Orfevres after a shooting in central Strasbourg, France December 12, 2018. (Photo by Christian Hartmann/Reuters) 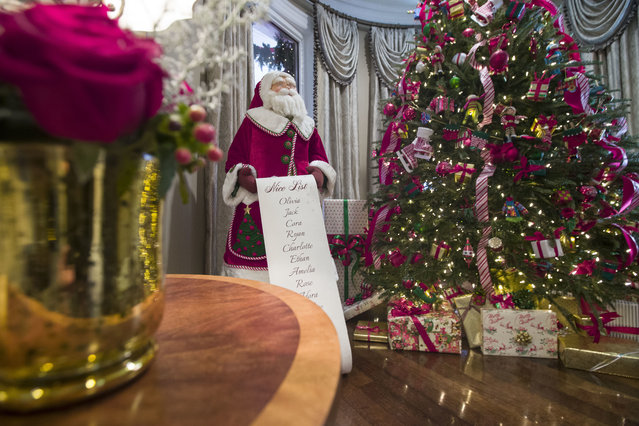 Holiday decorations are seen at the Vice President's residence, Thursday, December 6, 2018, in Washington. Christmas at Vice President Mike Pence’s official residence literally jumps out of the pages of “Twas the Night Before Christmas”. (Photo by Alex Brandon/AP Photo) 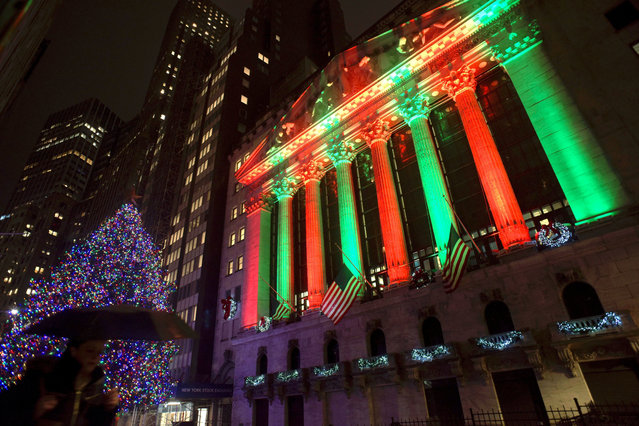 This photo shows the exterior of the New York Stock Exchange on Thursday evening, December 20, 2018. Stocks went into another slide Thursday in what is shaping up as the worst December on Wall Street since the depths of the Great Depression, with prices dragged down by rising fears of a recession somewhere on the horizon. The Dow Jones Industrial Average dropped 464 points, bringing its losses to more than 1,700 since last Friday. (Photo by Patrick Sison/AP Photo) 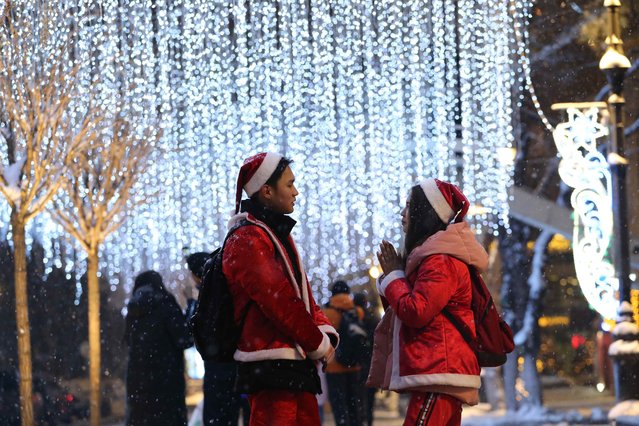 People dressed as Santa Claus stay next to the Christmas illuminations in Almaty, Kazakhstan December 20, 2018. (Photo by Pavel Mikheyev/Reuters) 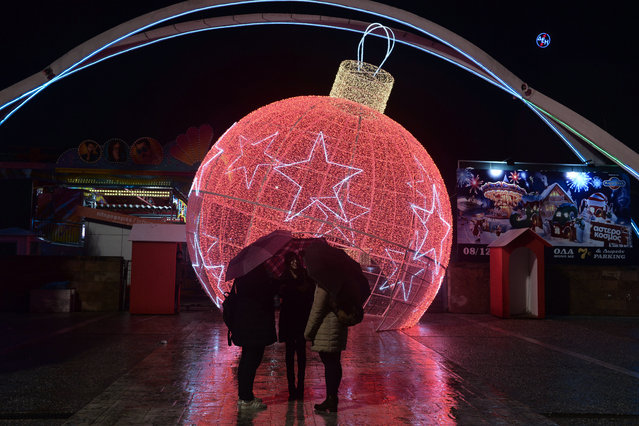 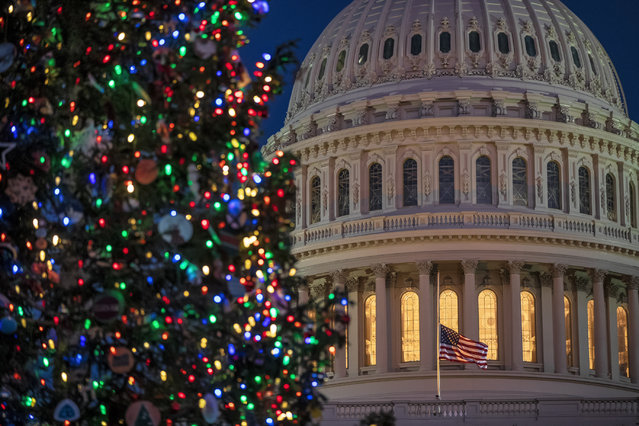 The Capitol is seen at twilight in Washington, Monday, December 17, 2018. The fight over President Donald Trump's $5 billion wall funds deepened Monday, threatening a partial government shutdown in a standoff that has become increasingly common in Washington. (Photo by J. Scott Applewhite/AP Photo) 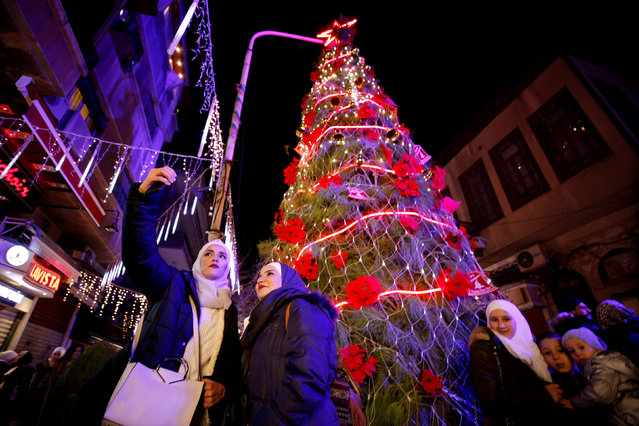 People take a selfie in front of a Christmas tree in the Qasaa district, Damascus, Syria December 14, 2018. (Photo by Omar Sanadiki/Reuters) 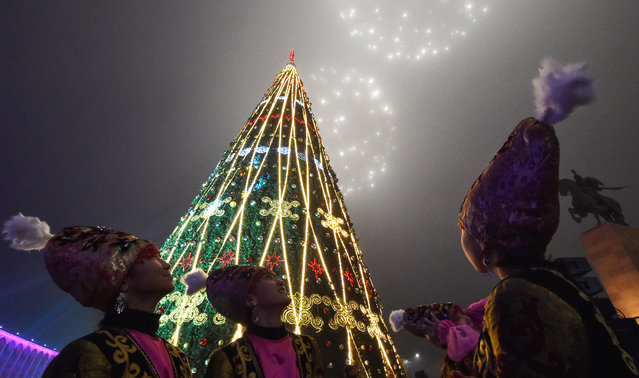 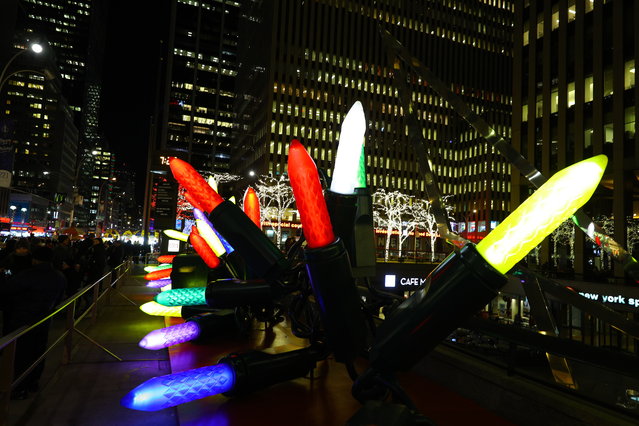 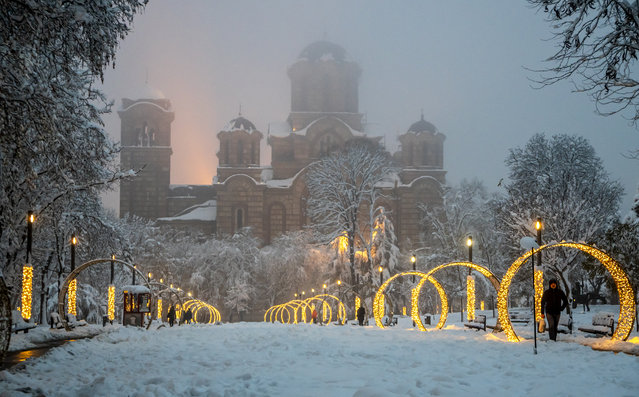 A man passes by Christmas lights at the central park in Belgrade, Serbia, 17 December 2018. Meteorologists predict heavy snowfall and temperatures below zero in the Western Balkans throughout the week. (Photo by Srdjan Suki/EPA/EFE) 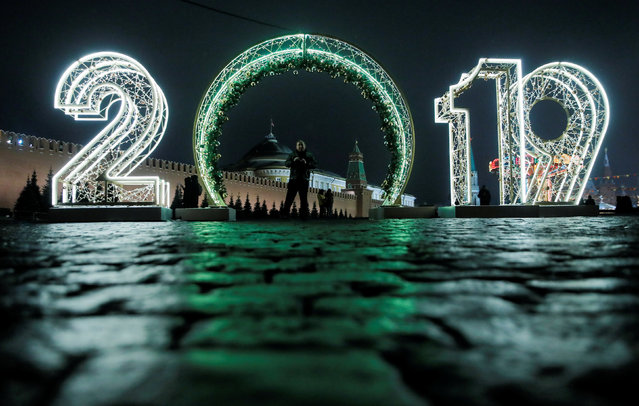