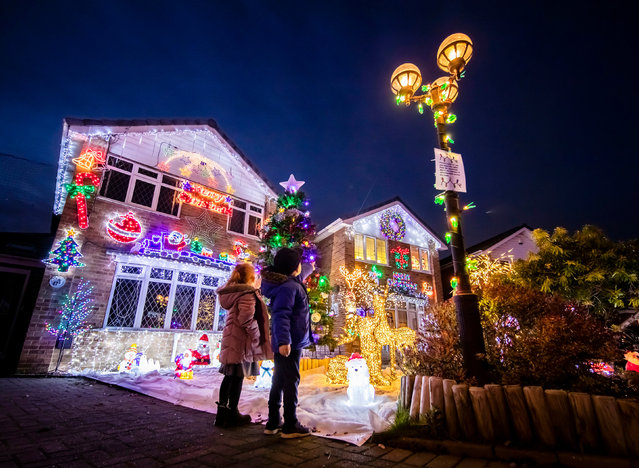 People look at the Christmas display on Stone Brig Lane in Rothwell, Yorkshire on December 2, 2019, as houses on the street are illuminated by Christmas lights during an event that has become know as the Stone Brig Lights. (Photo by Danny Lawson/PA Images via Getty Images) 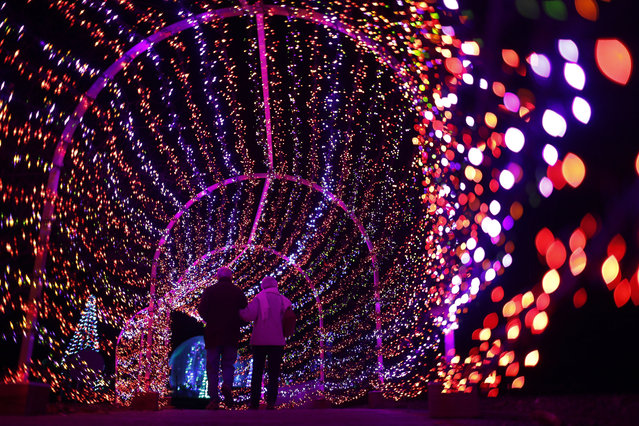 A couple walks through a tunnel of light during the annual Garden Glow at Missouri Botanical Garden Tuesday, December 3, 2019, in St. Louis. The annual event, which runs through Jan. 4, 2020, transforms the garden into a nightly winter wonderland of light and holiday music. (Photo by Jeff Roberson/AP Photo) 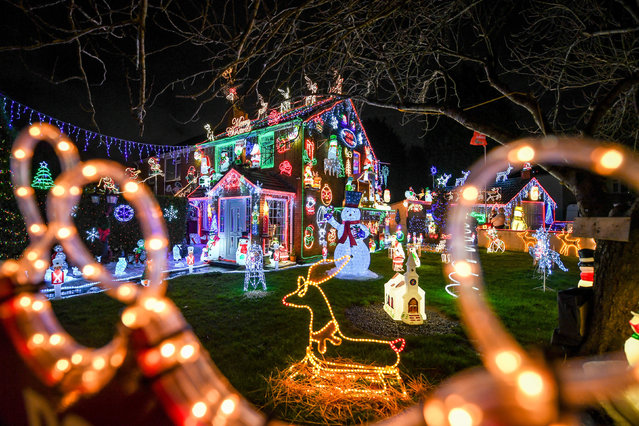 Christmas lights at a house in Brentry, Bristol on December 10, 2019, where the building is decked out with thousands of festive bulbs and displays each year. (Photo by Ben Birchall/PA Images via Getty Images) 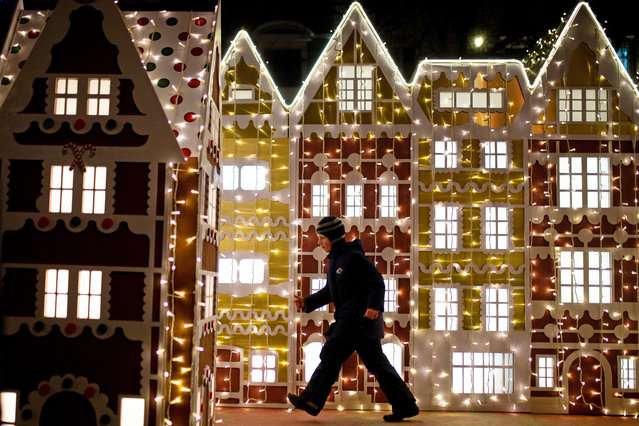 A child seen during the Journey to Christmas winter festival in Moscow's Tverskoi Boulevard on December 21, 2019. (Photo by Sergei Bobylev/TASS) 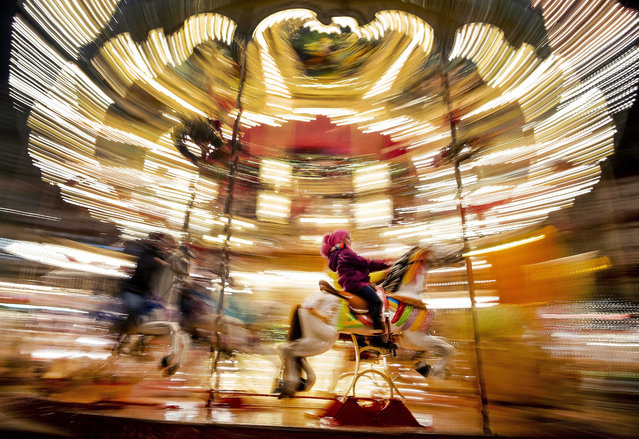 A girl rides a horse on a merry-go-round on the Christmas market in Frankfurt, Germany, Monday, December 16, 2019. (Photo by Michael Probst/AP Photo) 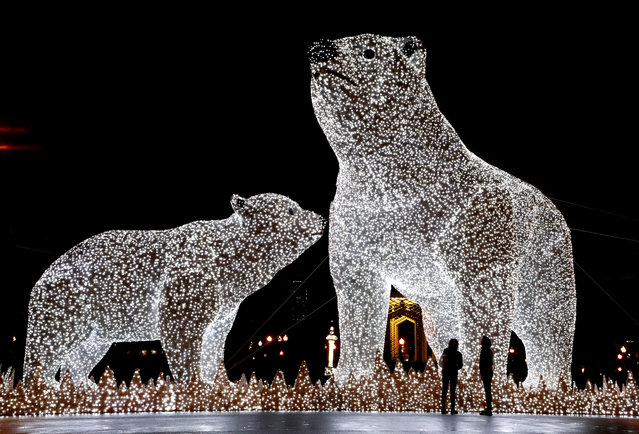 People walk along a seasonally decorated street with huge light sculptures of polar bears installed at the Gorky Park in Moscow, Russia, 17 December 2019. Russians are preparing to celebrate New Year's Eve on 31 December and Christmas which is observed on 07 January, according to the Russian Orthodox Julian calendar 13 days after Christmas on 25 December on the Gregorian calender. (Photo by Maxim Shipenkov/EPA/EFE) 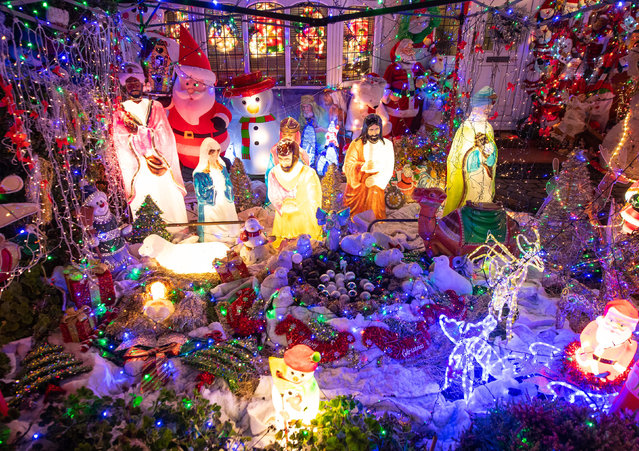 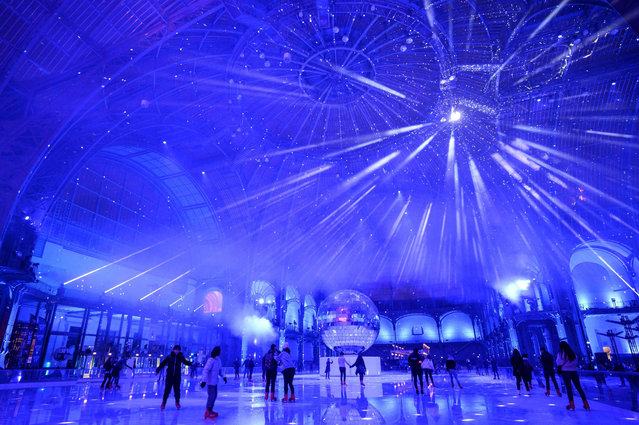 People skate on the ice skating rink hosted at the glass-roofed central hall of the Grand Palais in Paris, on December 17, 2019. (Photo by Thomas Samson/AFP Photo) 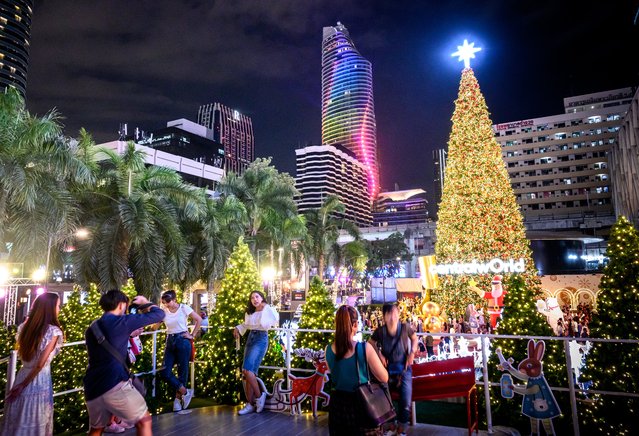 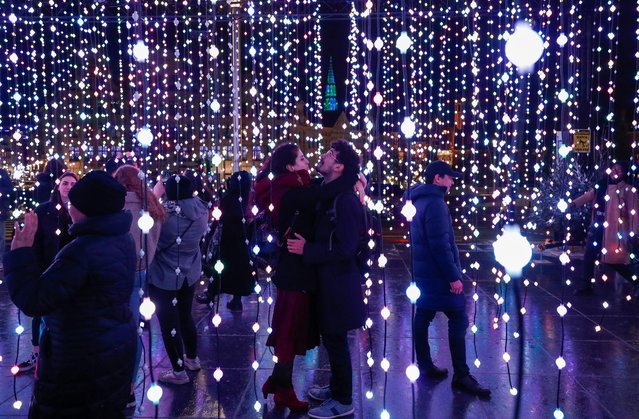 A couple is seen inside an artistic light installation as part of the Christmas “Winter Wonders” festivities in central Brussels, Belgium on December 19, 2019. (Photo by Francois Lenoir/Reuters) 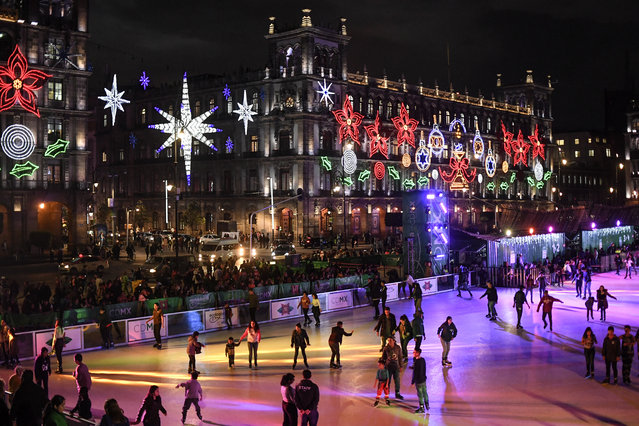 People skate on an acrilic rink placed in the Zocalo square with the City Hall showing Christmas decorations in the background in Mexico City on December 17, 2019. (Photo by Pedro Pardo/AFP Photo) 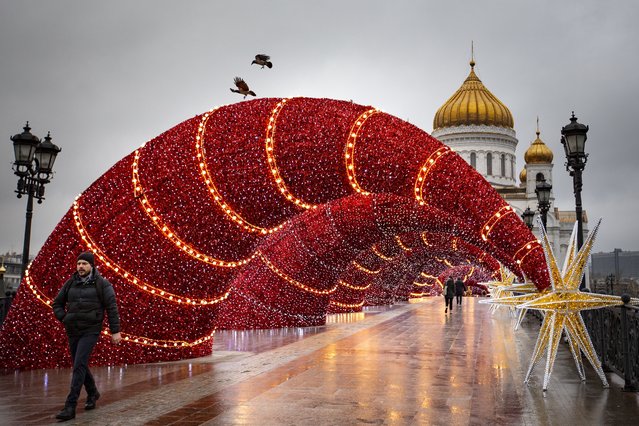 People walk on the Patriarch's bridge decorated for Christmas and New Year celebrations with the Christ the Savior Cathedral in the background in Moscow, Russia, Monday, December 16, 2019. (Photo by Alexander Zemlianichenko/AP Photo) 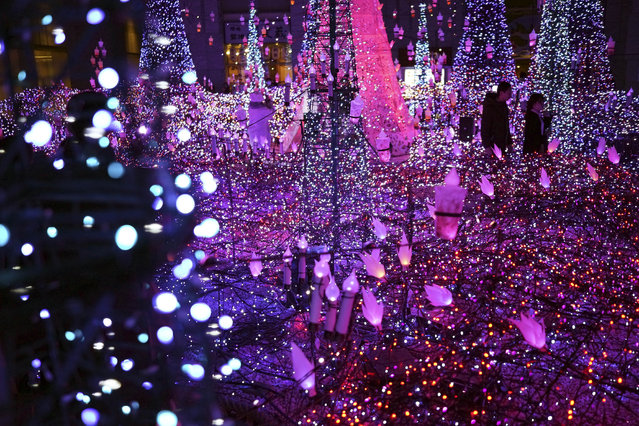 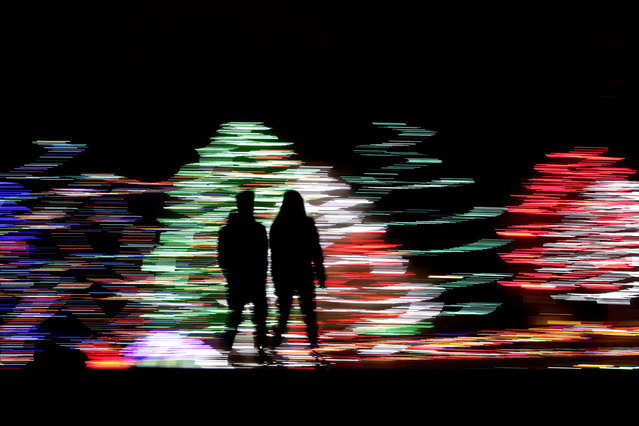 In this December 12, 2019 file photo taken with a long exposure, people are silhouetted against a Christmas display, at a park in Lenexa, Kan. Most Americans say the holiday season makes them feel very grateful and generous – but many report feeling stressed, too according to a new poll from The Associated Press-NORC Center for Public Affairs Research. (Photo by Charlie Riedel/AP Photo/File) 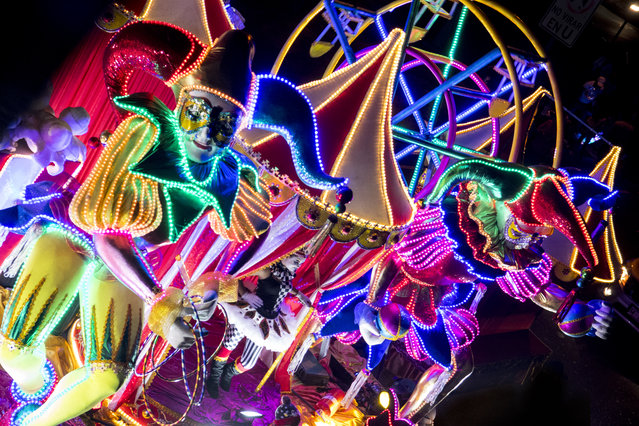 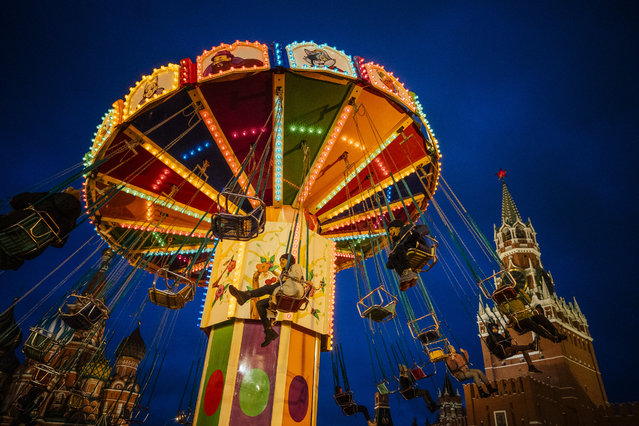 People ride a merry-go-round at the Christmas Market at the Red Square in Moscow, on December 16, 2019, as the Kremlin's Spasskaya Tower is seen in the background. (Photo by Dimitar Dilkoff/AFP Photo) 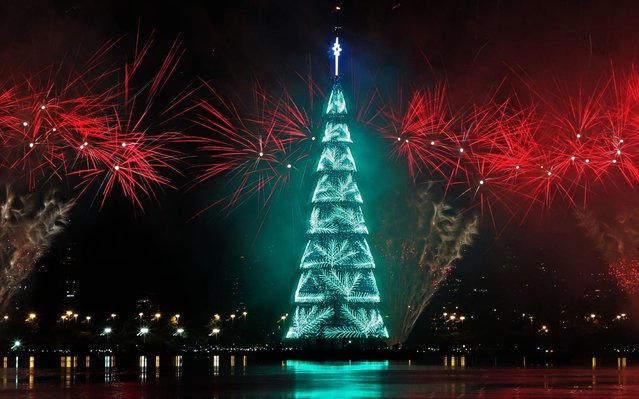 A view of the inauguration of the Lagoa Christmas tree in southern Rio de Janeiro, Brazil on December 14, 2019. (Photo by Fabio Motta/EPA/EFE/Rex Features/Shutterstock) 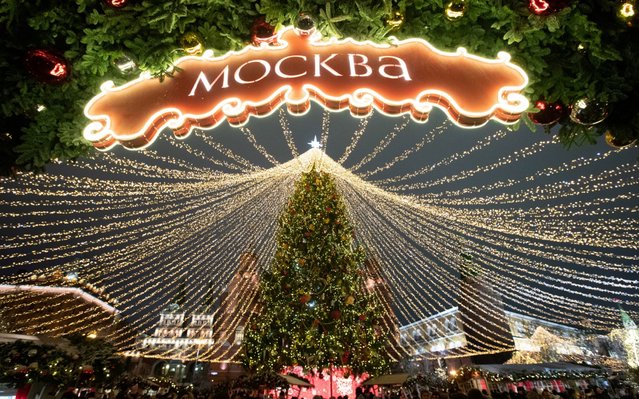 A Christmas tree decorated with baubles and festive lights in Manezhnaya Square ahead of the holiday season in Moscow, Russia on December 15, 2019. (Photo by Stanislav Krasilnikov/TASS) 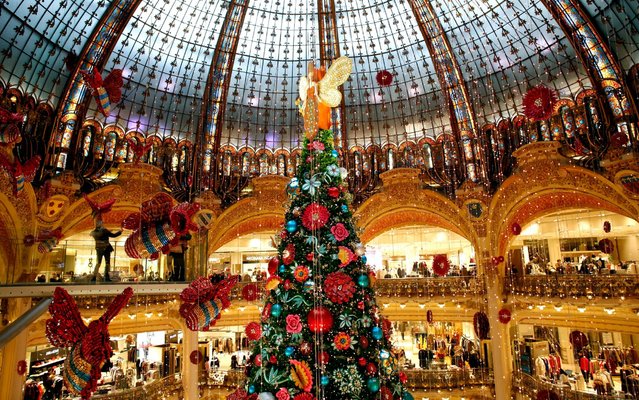 A giant christmas tree stands in the center of the Galeries Lafayette department store in Paris, Thursday, December 19, 2019. (Photo by Thibault Camus/AP Photo) 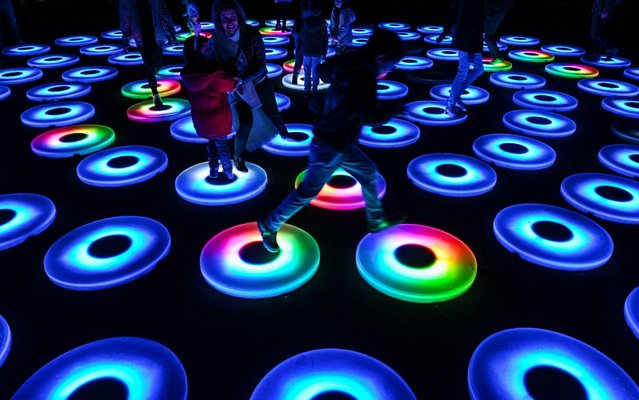 Children with their parents play in an area decorated with lit discs at the Stavros Niarchos Foundation Cultural Centre in Athens, on December 20, 2019. (Photo by Aris Messinis/AFP Photo) 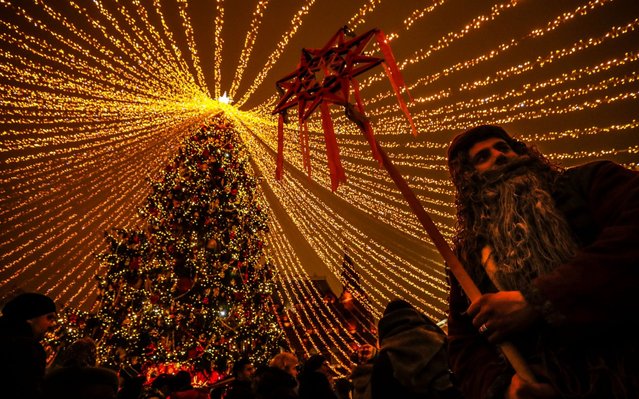