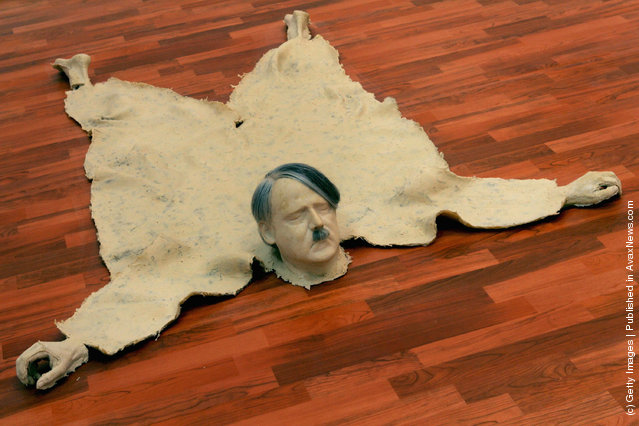 A silicon rug in the form of Adolph Hitler on display during an exhibition by Israeli artist Boaz Arad, at the Center for Contemporary Art February 22, 2007 in Tel Aviv, Israel. Arad is an Israeli artist who is dealing with the Holocaust in a provocative way. He uses the Holocaust to discuss human evil and contemporary Israel, which he says is torn and crumbling. (Photo by David Silverman/Getty Images) 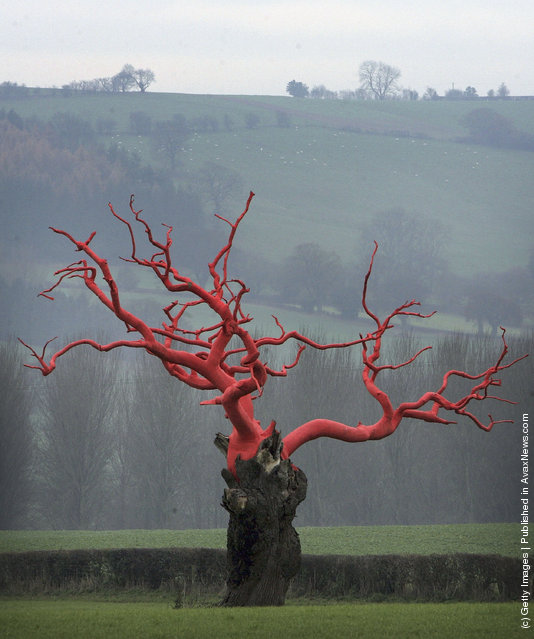 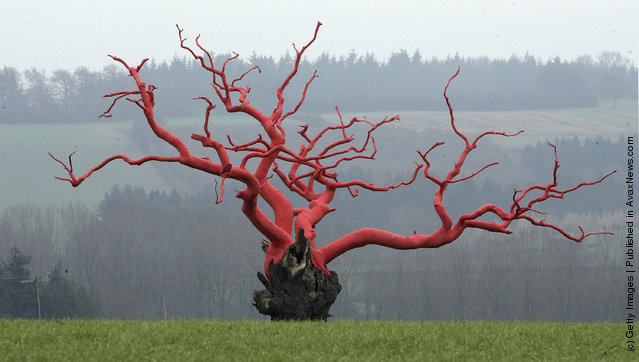 A contemporary art installation of a dead Oak tree covered in red fabric adorns the English countryside on December 9, 2005, in Lydham, Shropshire, England. The work of art near the English/Welsh border is the creation of local artist Phillipa Lawrence who stated that she has spent 1000 GBP on the material to cover the tree, and that the main point of the installation is to make people smile. The project involves covering one tree in each of the old Welsh counties. The trees are covered for six months after which the artist returns to remove the wrapping. (Photo by Christopher Furlong/Getty Images) 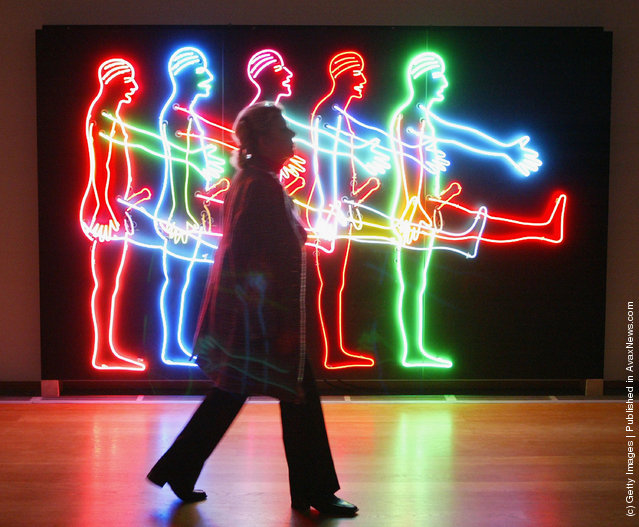 A visitor walks past American artist Bruce Nauman's “Five Marching Men” at the Christian Friedrich Flick Collection at the Hamburger Bahnhof Museum September 23, 2004 in Berlin, Germany. The exhibition has met with controversy due to the source of Mr. Flick's inherited fortune. Flick's grandfather was a major German arms industrialist supplying weaponry to the Nazis and employing slave laborers during World War II. (Photo by Sean Gallup/Getty Images) 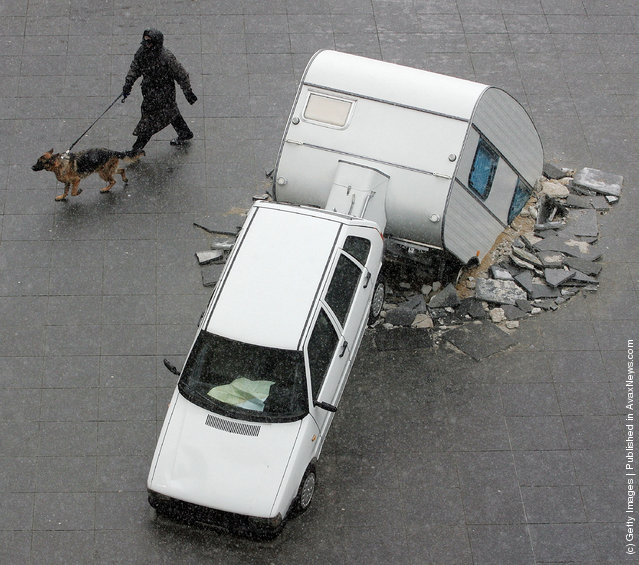 A person walks a dog past “Short Cut” by artists Michael Elmgreen and Ingar Dragset outside The Museum of Contemporary Art in the show “Universal Experience: Art, Life, and the Tourist's Eye” at the Museum of Contemporary Art February 24, 2005 in Chicago, Illinois. Occupying the entire MCA building as well as its outdoor spaces, the exhibition focuses on visual artists whose work responds to the issues related to tourism. (Photo by Tim Boyle/Getty Images) 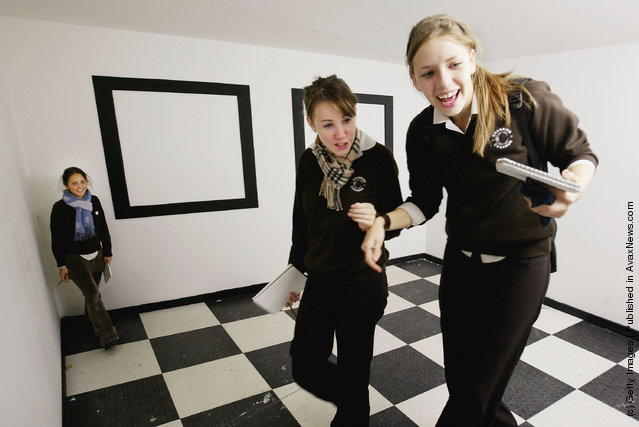 Schoolgirls enjoy “The Eyes, Lies and Illusions” exhibition which explores the art of visual perception from the Renaissance to the present day on October 8, 2004 held at the Hayward Gallery in London. The art work from the exquisite 19th century picture-puzzles and unexpected tricks of perspective bring together major works by internationally-renowned contemporary artists. (Photo by Graeme Robertson/Getty Images) 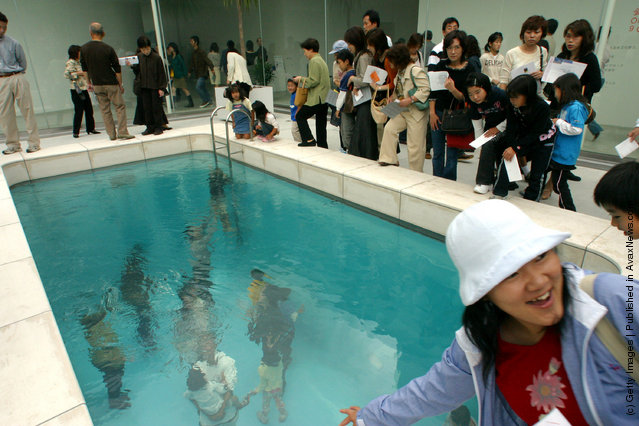 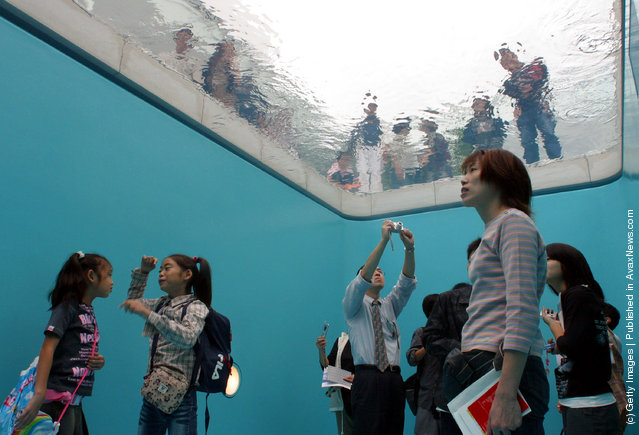 People enjoy being in an empty swimming pool with about 10cm depth shallow layer of water covered at the top at 21st Centry Museum of Contemporary Art, Kanazawa on October 11, 2004 in Kanazawa, Japan. This creation “The Swimming Pool” by an Argentina artist Leandro Erlich that confuses people's senses was shown as a temporary exhibit at the Venice Biennale in 2001, but this is the first time it has ever been permanently installed as a part of a building. The museum opened on October 9. (Photo by Junko Kimura/Getty Images) 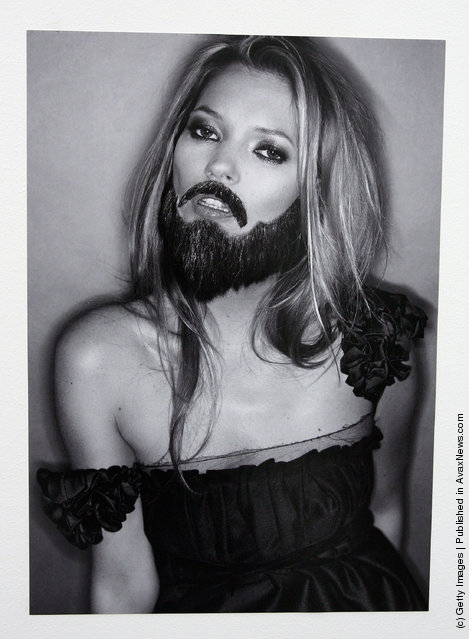 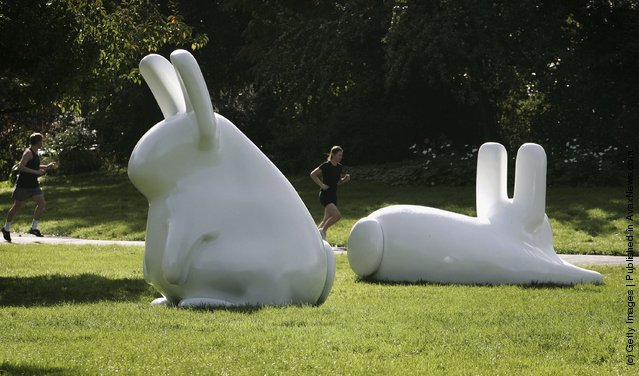 A sculpture entitled “Two Rabbits” by artist Tom Claasson is displayed in Regent's Park on October 12, 2006 in London, England. The Frieze Art Fair is held every October in London's Regent's Park and features over 160 contemporary art galleries and a sculpture park. (Photo by Peter Macdiarmid/Getty Images) 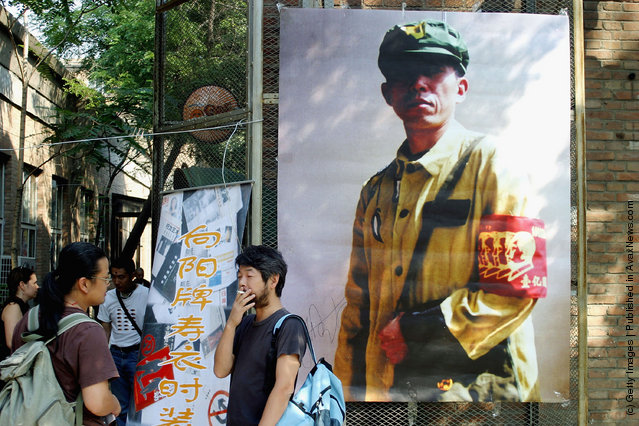 A poster advertises a performance at The Factory, an old Bauhaus style factory compound in northern Beijing where many alternative and underground exhibitions are being held during this weeks first international Biennale Arts Festival, on September 21, 2003, in Beijing, China. The festival is hosting over 600 paintings and sculptures by more than 300 artists representing 40 different countries. (Photo by Getty Images) 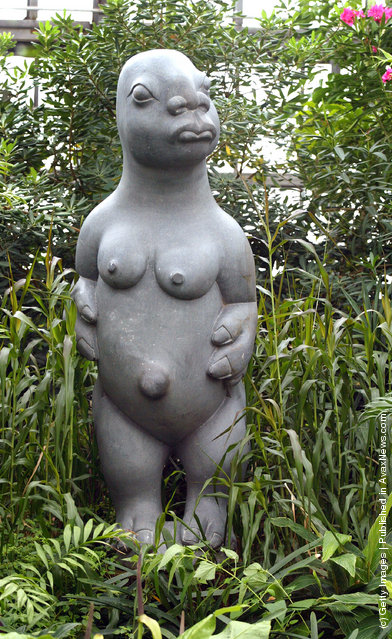 “Great Spirit Woman” by artist B. Matemera is displayed at the Garfield Park Conservatory's Chapungu exhibit September 26, 2003 in Chicago. “Chapungu: Custom and Legend, A Culture in Stone” is an exhibit of contemporary African stone sculpture drawn from the collection of the Chapungu Sculpture Park of Zimbabwe, Africa. They are the work of 35 sculptors three generations of artists most of whom are Shona. The Shona people are the majority ethnic group in Zimbabwe and have lived in southern Africa for more than 800 years. Through the sculptures, the artists speak of their cultural traditions, religious beliefs, social concerns and everyday life. (Photo by Tim Boyle/Getty Images) 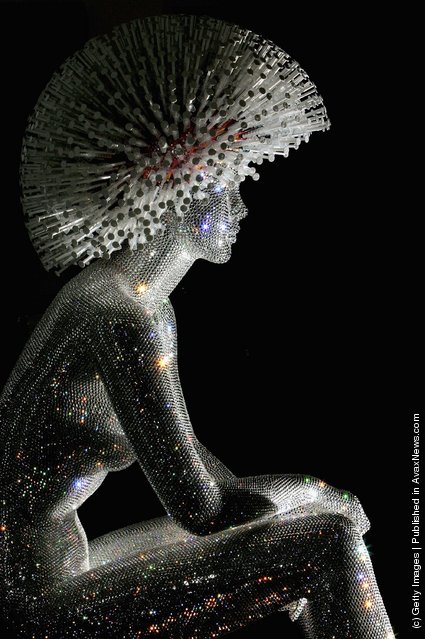 A piece of art by Mauro Percchetti made using urethane filled syringes and Swarowski diamonds entitled The Precious One is seen at the Press View for the London Art Fair at the Business Design Centre on January 17, 2006 in London, England. (Photo by Chris Jackson/Getty Images) 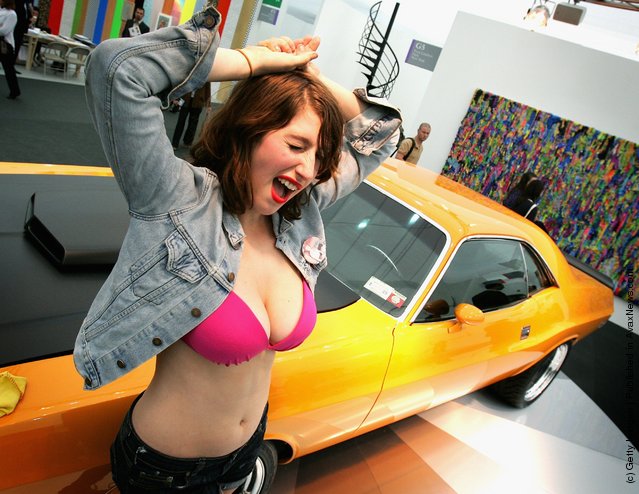 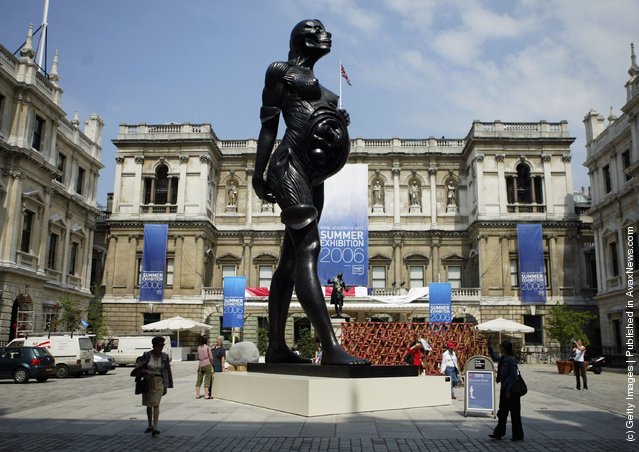 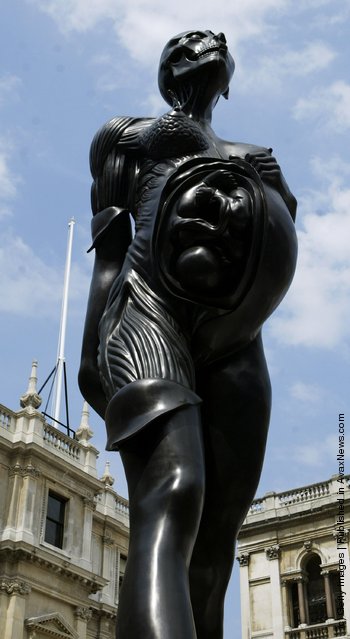 People look at a giant statue made by Damien Hirst, called “The Virgin Mother” at the press view for the Royal Academy Summer Exhibition 2006 at the Royal Academy of Arts on June 7, 2006 in London, England. (Photo by Christopher Hunt/Getty Images) 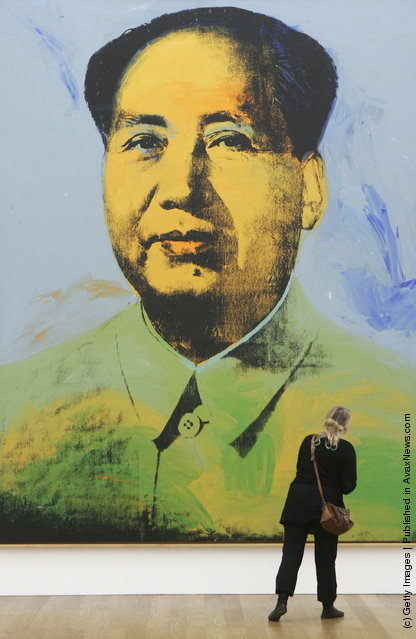 A visitor looks at the painting “Mao” by Andy Warhol at the Hamburger Bahnhof Contemporary Art Museum March 28, 2007 in Berlin, Germany. The painting is part of a collection that includes other Warhols, as well as works by Roy Lichtenstein and Joseph Beuys and is on loan from art collector Erich Marx. Marx is threatening to pull the entire collection from the museum because he feels the museum is not giving it the attention it deserves. (Photo by Sean Gallup/Getty Images) 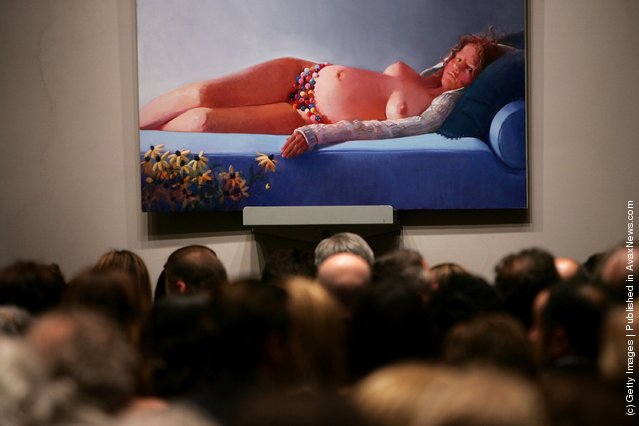 A Lisa Yuskavage print entitled “couch” is displayed inside the auction house Christie's during the Post-War and contemporary Art sale November 15, 2006 in New York City. Christie's estimates that works by Warhol, Willem de Kooning, Roy Lichtenstein and others could go for up to $220 million in what the auction house says may be the most valuable post-World War II and contemporary art auction in history. Warhol's “Mao” portrait from 1972 went for over 17 million, setting an all time record for the artist. (Photo by Spencer Platt/Getty Images) 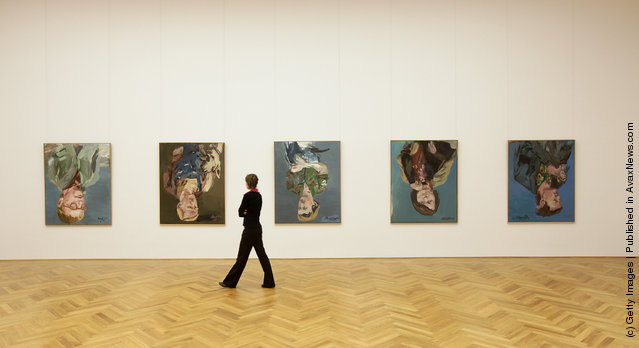 A museum employee, at the request of the photographer, looks at paintings by Georg Baselitz at the Albertinum museum on June 7, 2010 in Dresden, Germany. The Albertinum, which will exhibit paintings and sculpture from the Romantic Period through to the present, will re-open to the public on June 20, 2010. The Albertinum has undergone an extensive renovation following the devastating floods of 2002, and museum officials managed to raise funds partially by auctioning off works by modern German artists including Georg Richter and Georg Baselitz. (Photo by Sean Gallup/Getty Images) 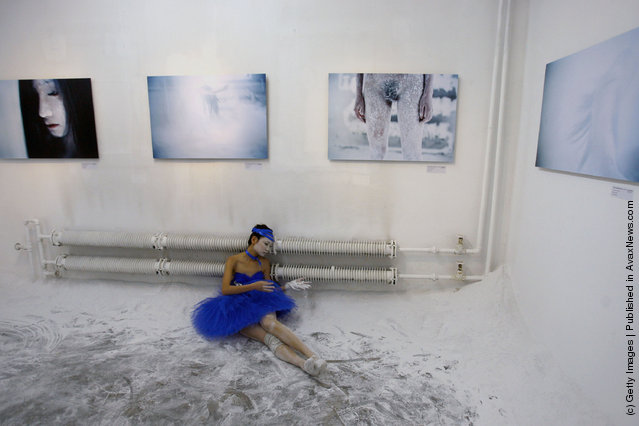 A performance artist performs in front of photos during the “White, Blue and Winter” photography exhibition of Swedish artist Linus Ricard at the 2007 Beijing 798 Art Festival on May 5, 2007 in Beijing, China. (Photo by China Photos/Getty Images) 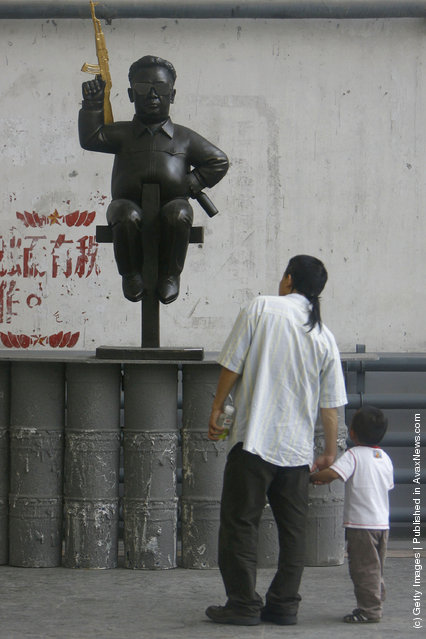 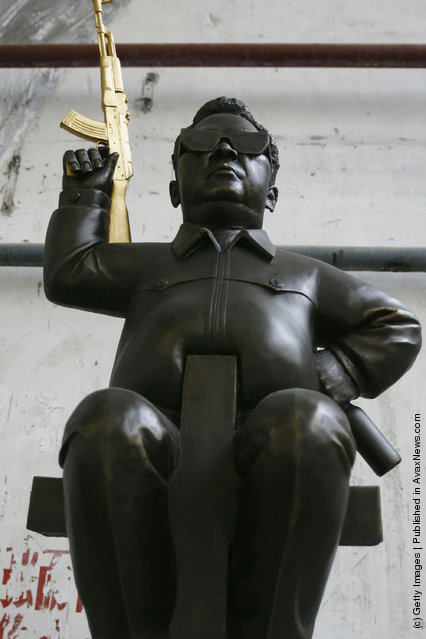 Sculpture of Chinese artist Wang Yang, titled “Sun of the Democratic Club” is displayed during the 2007 Beijing 798 Art Festival on May 5, 2007 in Beijing, China. (Photo by China Photos/Getty Images) 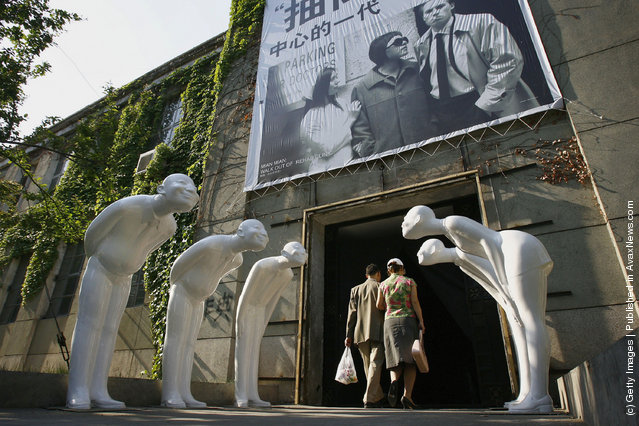 Visitors walk past sculptures in front of an exhibition hall during the 2007 Beijing 798 Art Festival on May 5, 2007 in Beijing, China. (Photo by China Photos/Getty Images) 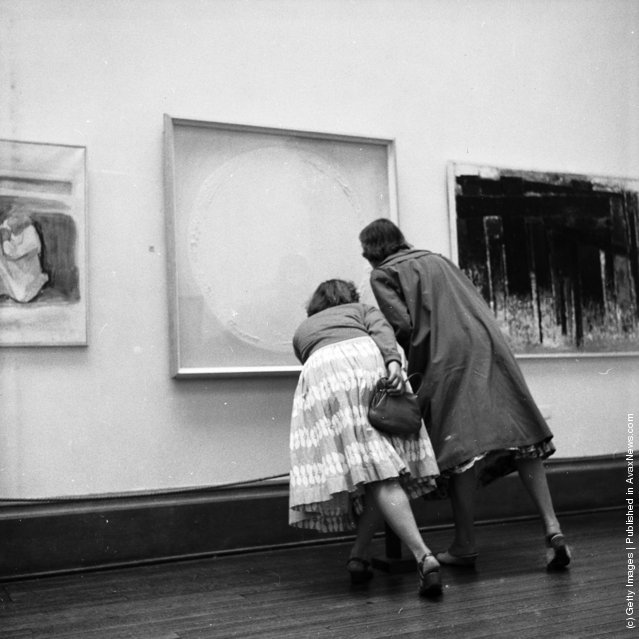 Visitors examine a painting at an exhibition of modern art, organised by the Contemporary Art Society on the theme of religion, in London's Tate Gallery. The painting is titled “A Religious Painting” by Jack Smith. (Photo by Frank Martin/BIPs/Getty Images). July 1958