Fact Former “World's Tallest Man” Leonid Stadnyk Dies Aged 44
“Leonid Stepanovych Stadnyk (5 August 1970 – 24 August 2014), born in Zhytomyr Oblast, Ukrainian Soviet Socialist Republic, USSR) was a Ukrainian man who allegedly stood at 8 feet 5 inches or 2.57 meters. Leonid Stadnyk was formerly listed as the world's tallest living man according to Guinness World Records. On August 20, 2008, editor-in-chief of Guinness World Records, Craig Glenday, announced that the title of world's tallest man had been returned to China's Bao Xishun after Stadnyk refused to be measured under the Guinness standard guidelines requiring several measurements throughout the course of 24 hours under the watchful eye of a Guinness Book representative. Guinness then averages the height readings to come up with a final official measured height.

Stadnyk's excessive growth began after brain surgery at the age of 14, after which he developed a pituitary gland tumor that caused the gland to secrete large amounts of growth hormone. This resulted in what doctors describe as acromegalic gigantism. Twenty years after the surgery, the doctors discovered the tumour had mysteriously disappeared. Stadnyk reportedly wore European size 62 shoes (US size 28). His health was slowly failing in that he needed to hold on to limbs of trees and the side of his house to walk about. His official recorded weight was listed at 200 kg (440 lb). Stadnyk died at the age of 44 on August 24, 2014 from a brain hemorrhage”. – Wikipedia 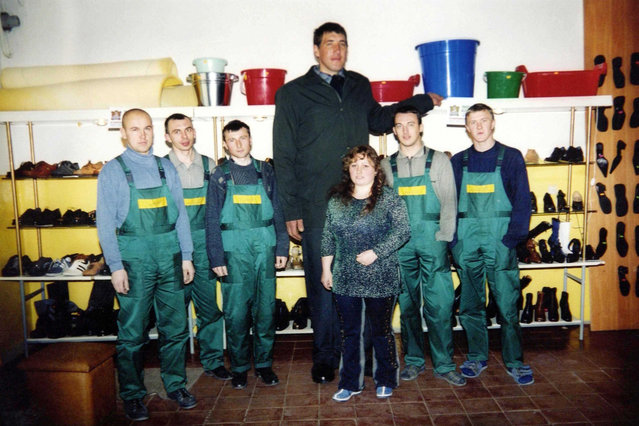 Leonid Stadnik, the tallest man in the world, 2,53m. A shoes factory in Zhitomir, Uraine, picture of Leonid with some of the workers taken around 2002. (Photo by LASKI/SIPA Press) 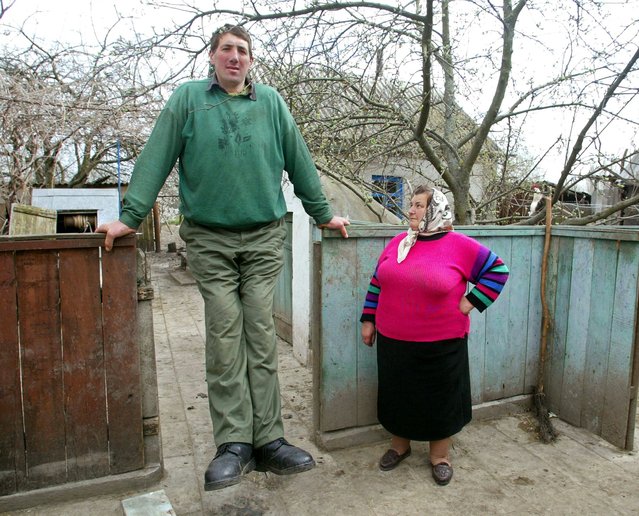 Ukraine's Leonid Stadnyk, who stands at a height of 2.53 metres (eight feet four inches) and may be considered the world's tallest living man, near his house in the village of Podolyantsi in Ukraine's Zhytomyr region, about 200 km (124 miles) from the capital Kiev, 2005. (Photo by Reuters/Stringer) 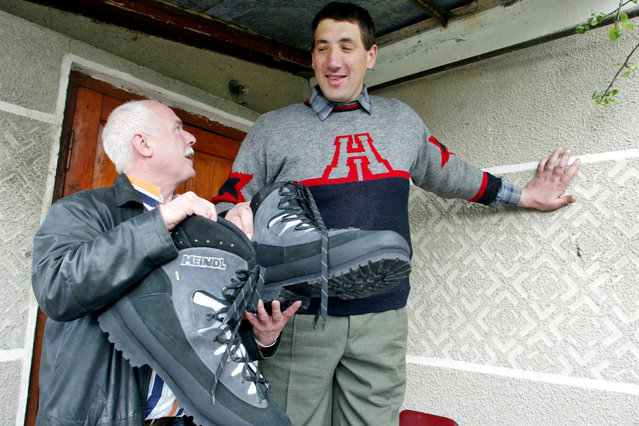 German shoemaker Georg Wessels (L) presents a pair of shoes to Ukraine's Leonid Stadnyk, who stands at a height of 2.53 metres (eight feet four inches) and may be considered the world's tallest living man, near his house in the village of Podolyantsi in Ukraine's Zhytomyr region, about 200 km (124 miles) from the capital Kiev, May 6, 2005. Georg and his brother (Peter) Wessels, owners of a company manufacturing made-to-measure orthopaedic footwear, brought Stadnyk a pair of size 64 shoes. (Photo by Reuters/Stringer) 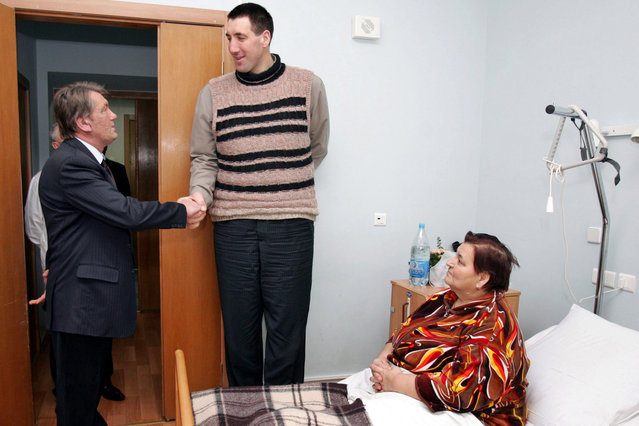 Ukrainian President Viktor Yushchenko (L) shakes hands with Leonid Stadnyk, who stands 2.53 metres (8 feet 3 inches) tall, during a visit to Stadnyk's mother (R) in hospital in Kiev January 18, 2006. Stadnyk, who may possibly be the world's tallest man, brought his elderly mother from their village in western Ukraine for treatment to a Kiev hospital, where he met the president. (Photo by Mykhaylo Markiv/Reuters) 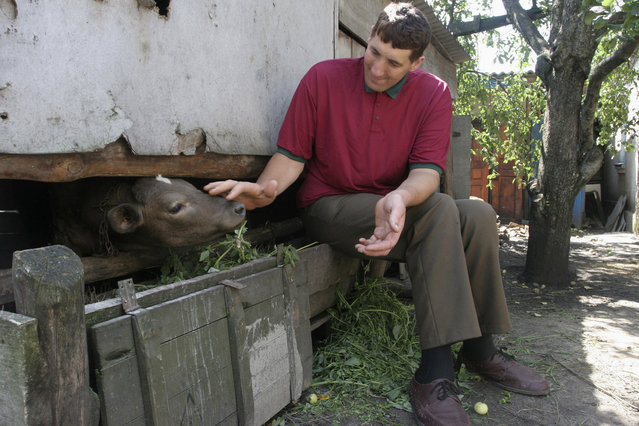 Leonid Stadnyk sits by his house in the village of Podolyantsi in central Ukraine August 11, 2007. Being named the world's tallest man has meant very little for Stadnyk, scraping together a living with his mother in a tiny village. Guinness World Records gave the accolade to him last week. But Stadnyk is prouder of the present from local authorities on his 37th birthday – a bathroom with a shower tall enough to fit his 2.53-metre (8-foot, four-inch) frame. (Photo by Vladimir Sindeyev/Reuters) 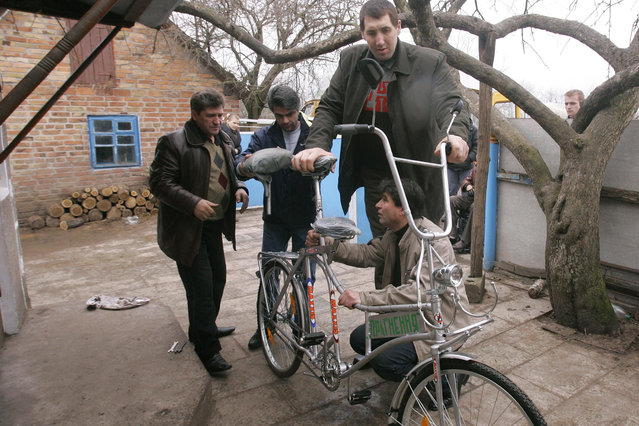 Ukrainian Leonid Stadnyk (R, standing) inspects a new bicycle specially made for him in the village of Podolyantsi in Ukraine's Zhytomyr region, about 200 km (124 miles) from the capital Kiev, March 23, 2008. Stadnyk, at 2.53 metres (8-foot, four-inch), is the world's tallest man according to the Guinness World Records. (Photo by Reuters/Stringer)