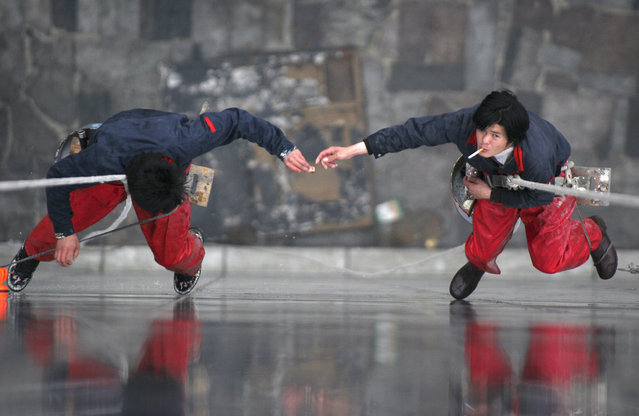 A window cleaner passes a lighter to his colleague while rappelling from a new building in Tianjin March 23, 2007. (Photo by Reuters/Stringer) 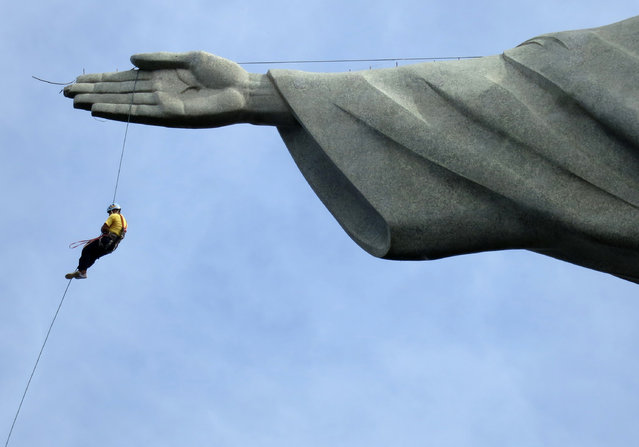 A worker rappels from the Cristo Redentor statue at the Corcovado in Rio de Janeiro June 23, 2014. (Photo by Alessandro Garofalo/Reuters) 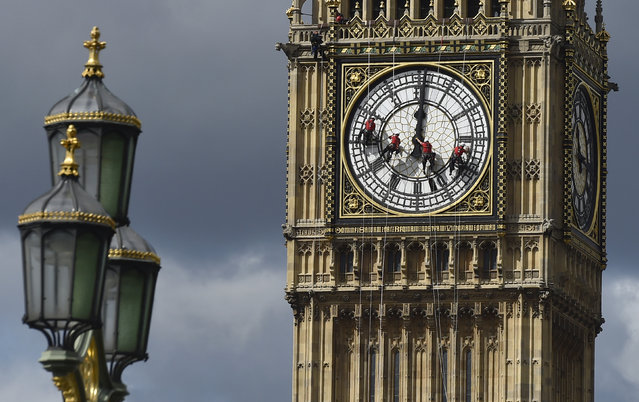 Cleaners abseil down one of the faces of Big Ben, to clean and polish the clock face, above the Houses of Parliament, in central London August 19, 2014. A week has been set aside for the cleaning of what is officially known as the Great Clock, which is set in the Elizabeth Tower. (Photo by Toby Melville/Reuters) 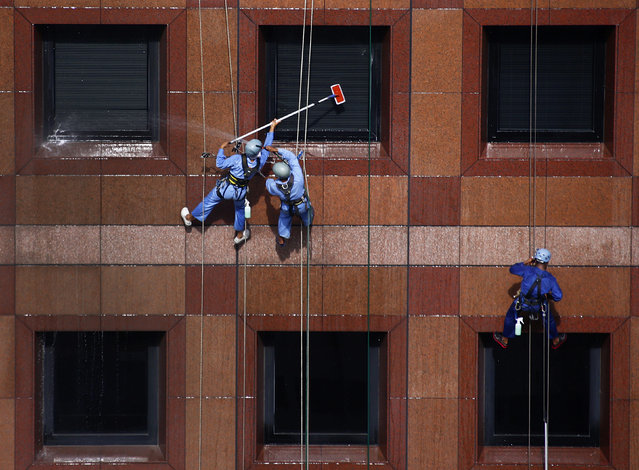 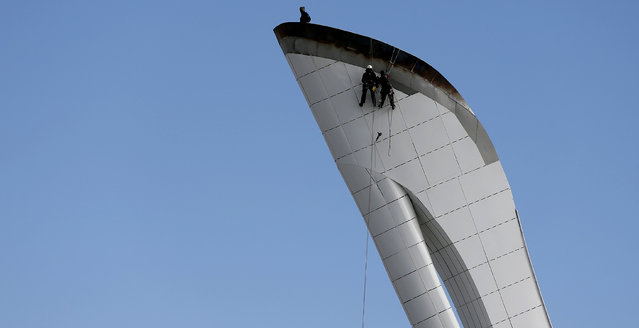 Workers abseil from the top of the Olympic cauldron inside the Olympic park in preparation for the 2014 Winter Olympics in Sochi, February 2, 2014. (Photo by Phil Noble/Reuters) 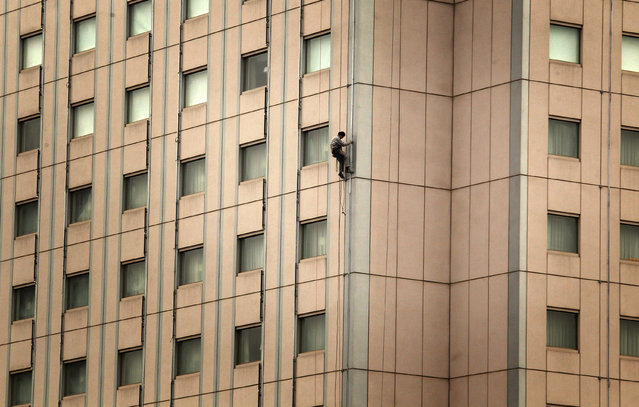 A cleaner abseils down the side of a newly renovated building in central Beijing March 5, 2012. (Photo by David Gray/Reuters) 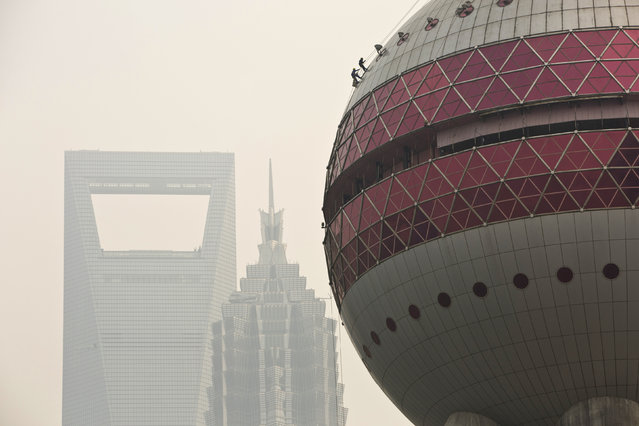 Workers clean the exterior of the Oriental Pearl TV Tower during a hazy day at Lujiazui financial district of Pudong in Shanghai, March 10, 2014. (Photo by Aly Song/Reuters) 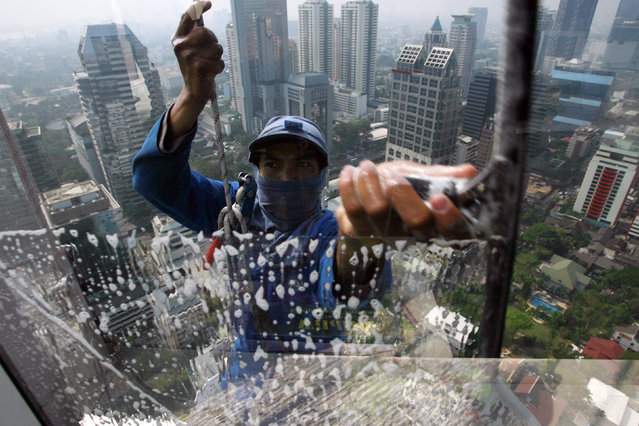 A worker cleans the window of a building in Bangkok January 22, 2009. (Photo by Sukree Sukplang/Reuters) 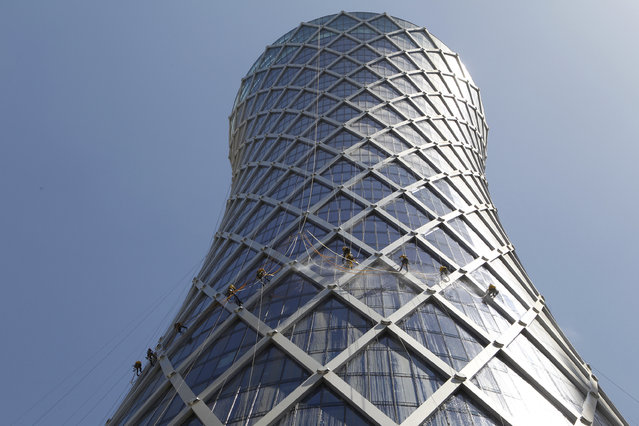 Workers suspended on ropes clean the glass windows at the Tornado tower in Doha March 20, 2011. (Photo by Fadi Al-Assaad/Reuters) 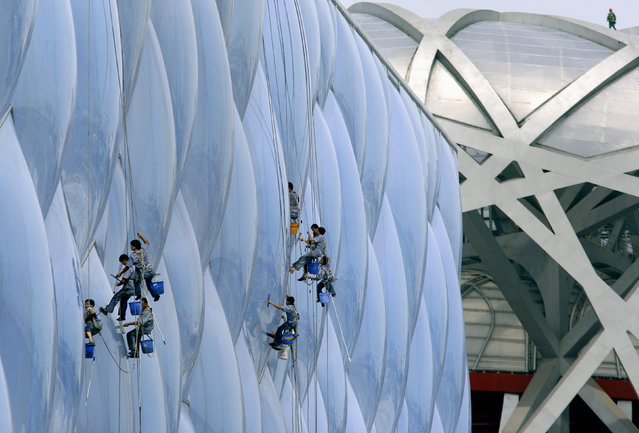 A worker walks atop the roof of the National Stadium (R), also known as the Bird's Nest, as cleaners abseil down the exterior of the National Aquatics Center, also known as the Water Cube, at the Olympic Green in Beijing July 17, 2008. (Photo by David Gray/Reuters)
Edit Del
21 Aug 2014 10:07:00, post received 0 comments
Publication archive:
←   →
Popular tags:
All tags
Last searches: