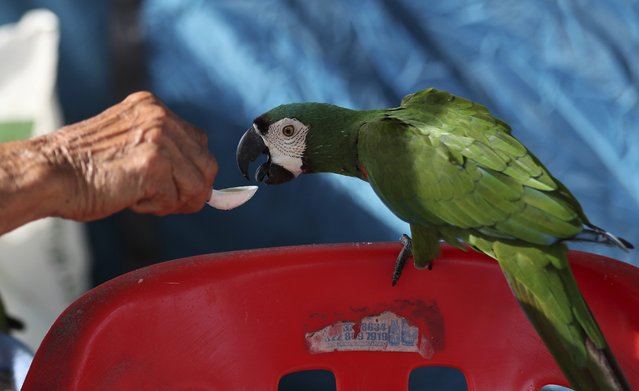 A Venezuelan man feeds a macaw at a community center turned into a shelter in Arauquita, Colombia, Thursday, March 25, 2021, on the border with Venezuela. Thousands of Venezuelans are seeking shelter in Colombia this week following clashes between Venezuela's military and a Colombian armed group in a community along the nations' shared border. (Photo by Fernando Vergara/AP Photo) 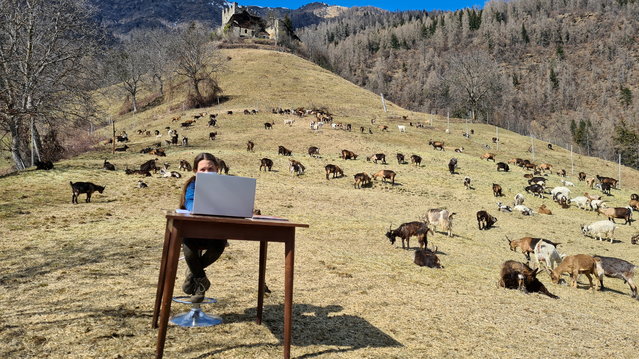 10-year-old Fiammetta attends her online lessons surrounded by her shepherd father's herd of goats in the mountains, while schools are closed due to coronavirus disease (COVID-19) restrictions, in Caldes, northern Italy, March 20, 2021. (Photo by Martina Valentini/Val di Sole press office/Handout via Reuters) 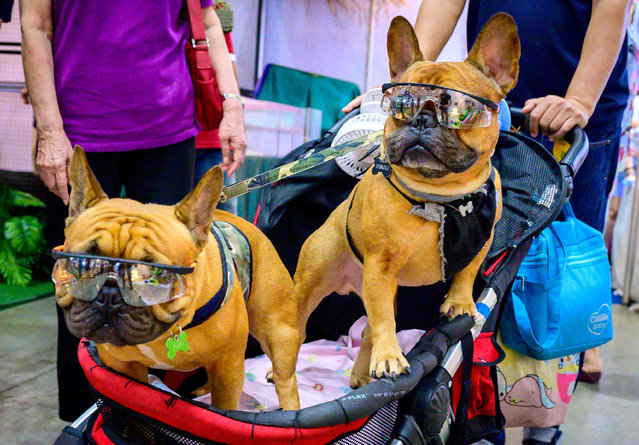 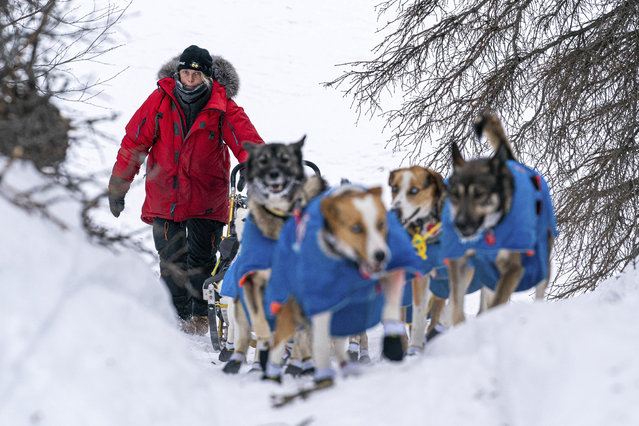 Mille Porsild mushes up a hill before Finger Lake during the Iditarod Dog Sled Race in Alaska, U.S. March 14, 2021. (Photo by Loren Holmes/ADN/Pool via Reuters) 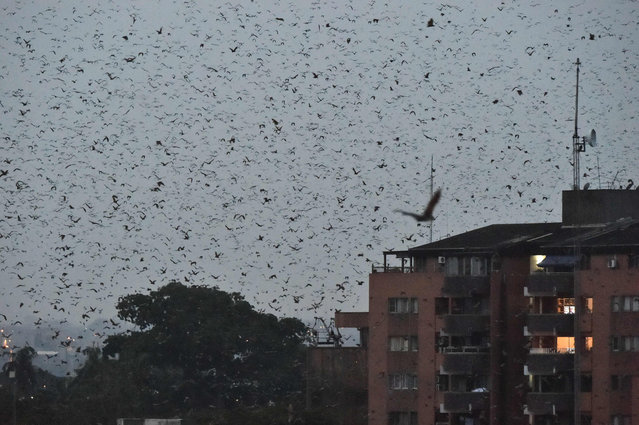 A general view of bats flying over the building in the Abidjan CBD, Ivory Coast, on January 6, 2021. Scientists say that bats are a crucial part of the food chain, but are also a suspected source of viruses, including COVID-19, that have leapt the species barriers to humans. Hunting and human encroachment on their habitat has heightened the risk of transmission. (Photo by Sia Kambou/AFP Photo) 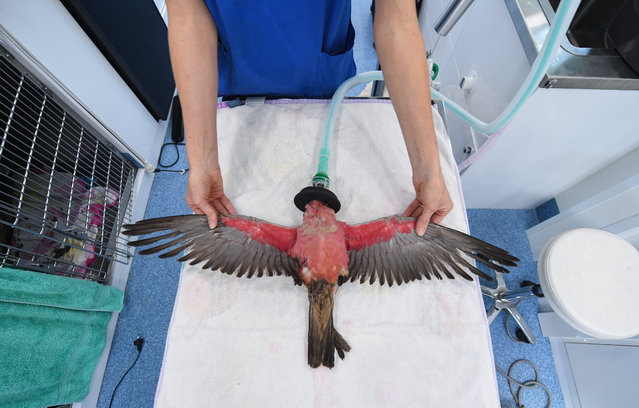 An Australian Galah, also known as the pink and grey cockatoo is attended to in the Byron Bay Mobile Wildlife Hospital having been found injured on the ground after heavy rain on March 24, 2021 in Byron Bay, Australia. Extreme weather has caused extensive flooding across New South Wales following days of sustained rain and reports are now emerging of ground-dwelling animals such as echidnas and wombats being trapped underground or being hit by cars when moving to higher ground. Situated at Australia's eastern-most point, the vet team are seeing increasing caseloads of native wildlife presenting with injuries from the floods. The not for profit veterinary organisation is advising the public to be alert to the perils facing wildlife as recovery and cleanup efforts get underway. (Photo by James D. Morgan/Getty Images) 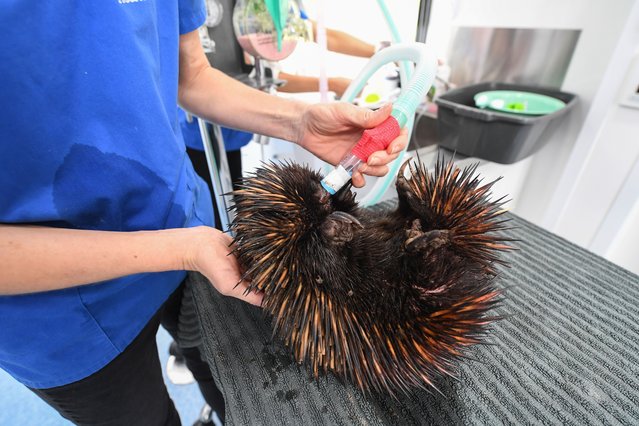 An echidna is attended to in the Byron Bay Mobile Wildlife Hospital having been found injured beside a road escaping to higher ground after heavy rain on March 24, 2021 in Byron Bay, Australia. (Photo by James D. Morgan/Getty Images) 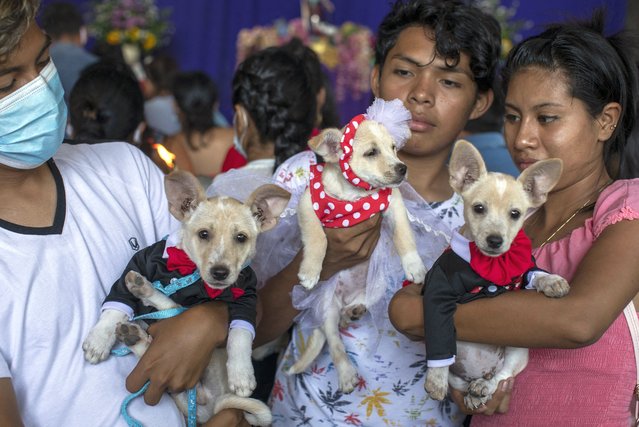 Youths carry their dogs to be blessed by Saint Lazarus, in Monimbo neighbourhood in Masaya, about 35 km south of Managua, on March 21, 2021. According to tradition in Nicaragua, faithfuls ask Saint Lazarus for the health of their dogs and pay these favours back by bringing their pets dressed in costumes to attend mass in honour of the saint. (Photo by Inti Ocon/AFP Photo) 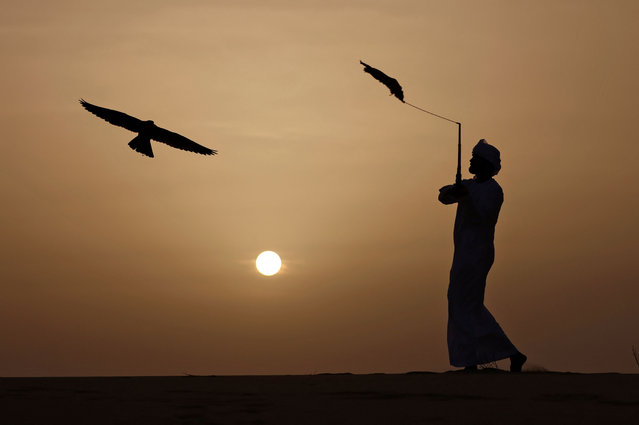 An Emirati falconer trains his falcon before the end of the season in the United Arab Emirates' al-Dhafra desert on March 19, 2021. (Photo by Karim Sahib/AFP Photo) 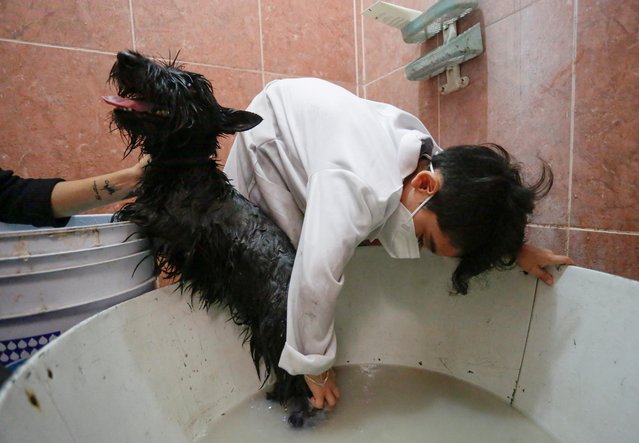 Jonathan Salas, 7, who bathes the pets for money to fund his plan for veterinary studies in the future, is pictured bathing a dog helped by his mother, at his home in Apodaca, on the outskirts of Monterrey, Mexico on March 14, 2021. (Photo by Daniel Becerril/Reuters) 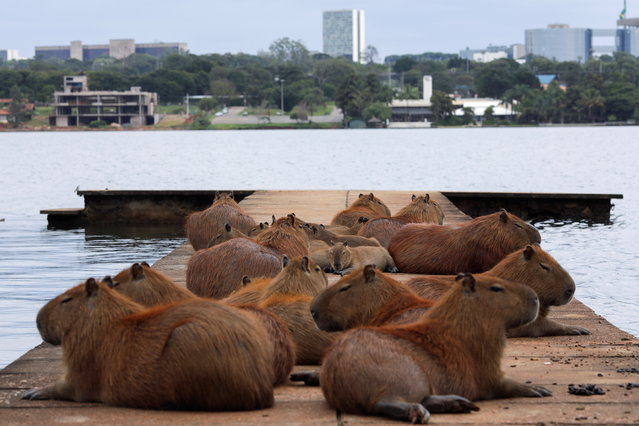 Capybaras are seen at a pier on Paranoa lake, amid the coronavirus disease (COVID-19) outbreak, in Brasilia, Brazil, March 18, 2021. (Photo by Ueslei Marcelino./Reuters) 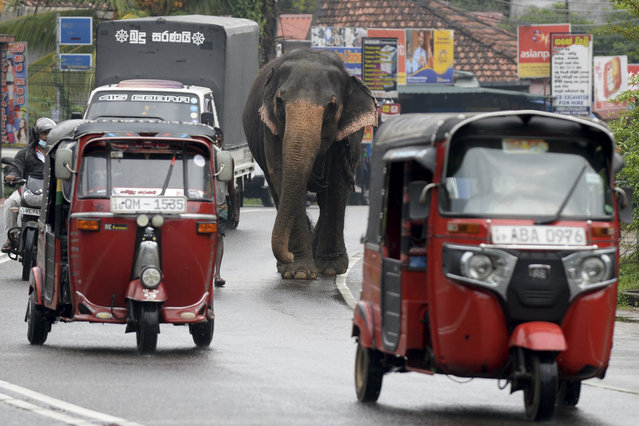 A mahout walks next to his elephant through a busy street in Horana, a suburb of Sri Lanka's capital Colombo on March 23, 2021. (Photo by Lakruwan Wanniarachchi/AFP Photo) 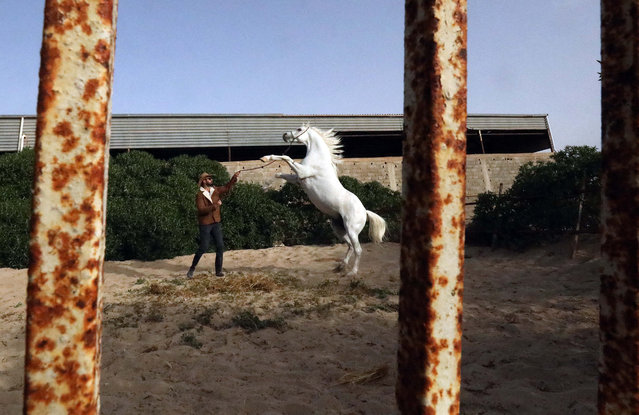 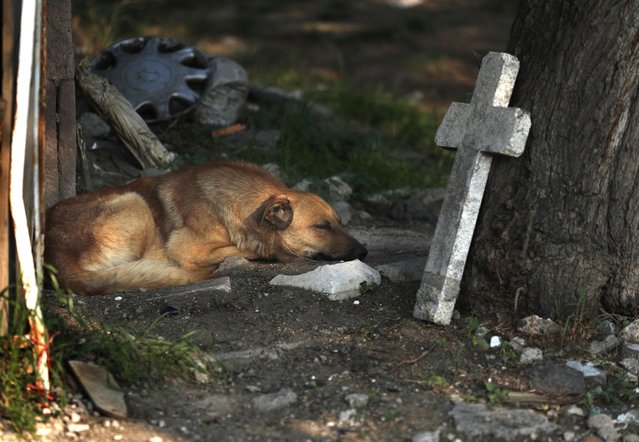 In this May 27, 2020 file photo, a street dog sleeps amid the tombs at the San Nicolas Tolentino Pantheon cemetery as workers make space for more burials in the Iztapalapa neighborhood of Mexico City, amid the coronavirus pandemic. As Mexico approaches 200,000 in officially test-confirmed deaths from COVID-19, the real death toll is probably higher due to the country’s extremely low rate of testing. (Photo by Marco Ugarte/AP Photo/File) 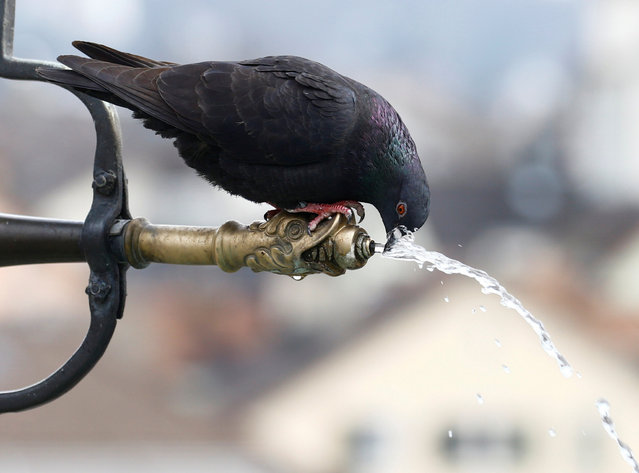 A pigeon drinks water from a fountain in a public park, as the spread of the coronavirus disease (COVID-19) continues, in Zurich, Switzerland on March 4, 2021. (Photo by Arnd Wiegmann/Reuters) 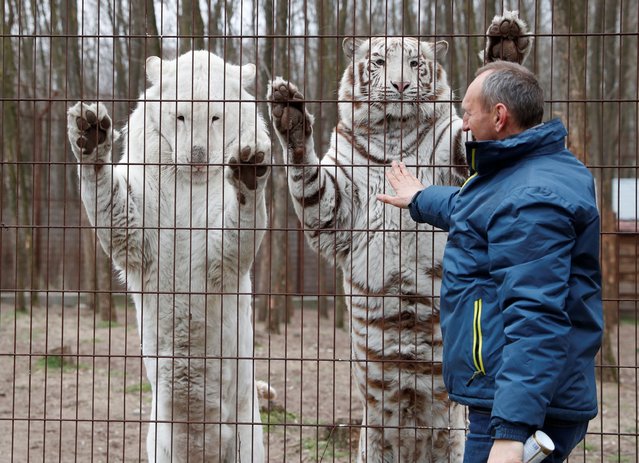 White Bengal tigers Mohini and Begum react with their owner Tibor Toth at a private zoo closed to the public, during the coronavirus disease (COVID-19) pandemic, in Felsolajos, Hungary, March 22, 2021. (Photo by Bernadett Szabo/Reuters) 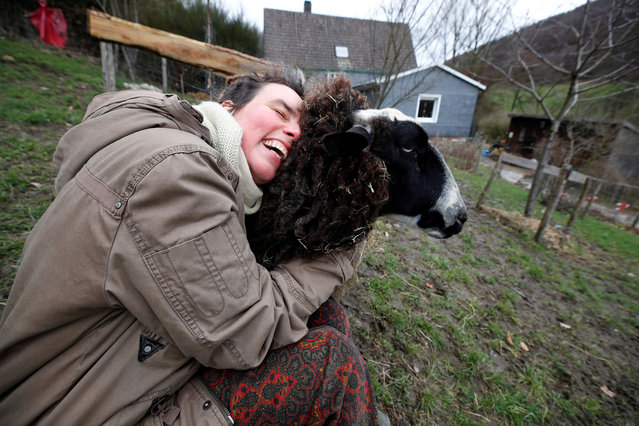 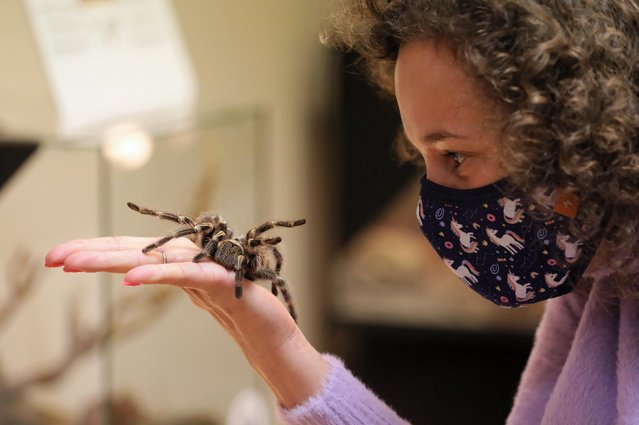 A Chaco golden knee (Grammostola pulchripes) is presented at the exhibition of spiders and scorpions from all inhabited continents at the Palace of Culture and Science in Warsaw, Poland, 07 March 2021. (Photo by Pawel Supernak/EPA/EFE)
Edit Del
04 Apr 2021 08:42:00, post received 0 comments
Publication archive:
←   →
Popular tags:
All tags
Last searches: