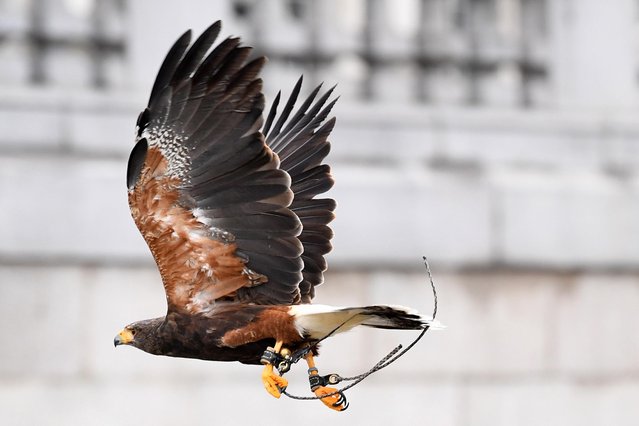 Jip, a Harris hawk flies in Trafalgar square in London, Britain, 29 September 2020. Harris hawks are trained birds of preys that are used ​by especially trained handlers to keep the pigeons away. (Photo by Acundo Arrizabalaga/EPA/EFE) 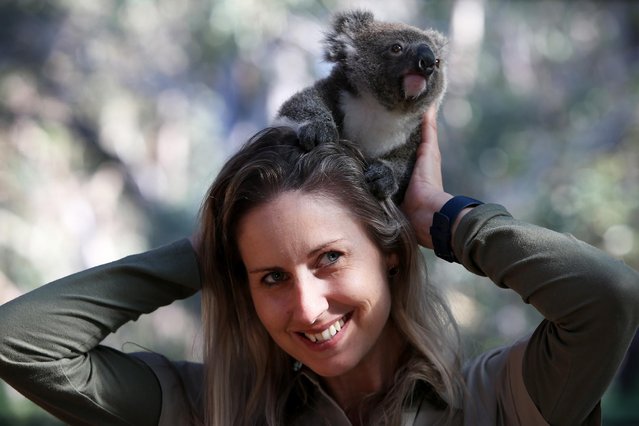 Hayley Shute holds “Ember” a male joey at the Australian Reptile Park on September 24, 2020 on the Central Coast, Australia. Park curator and koala carer of 18 years, Haley will hand raise Ember until he is 6 months of age due to his mothers illness . Nine koala joeys have been born as part of the Australian Reptile Park's conservation breeding program this year. The birth of the nine joeys has been celebrated by keepers, as they have been working to increase koala numbers in the wake of Australia's devastating bushfire season at the end of 2019 and early 2020 which saw tens of thousands of koalas perish and habitats destroyed. (Photo by Lisa Maree Williams/Getty Images) 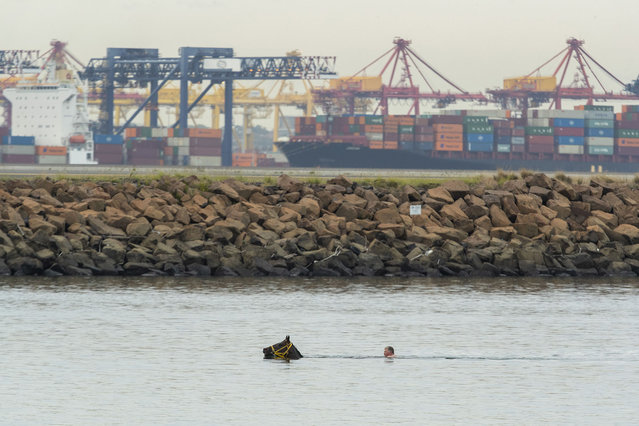 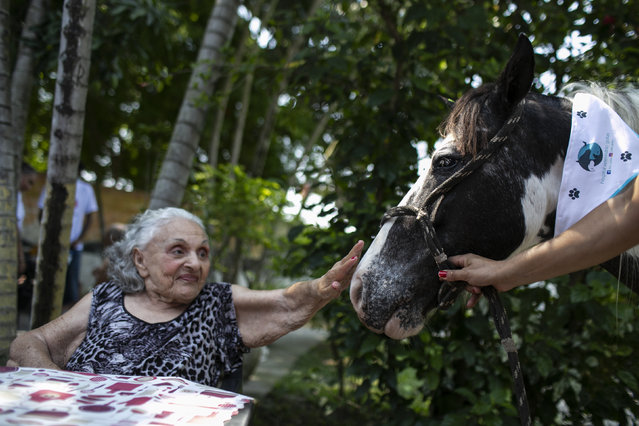 An elderly woman reaches out to pet a horse named Tony at the “Casa de Repouso Laços de Ouro” nursing home in Sepetiba, Brazil, Thursday, October 1, 2020. The Golias organization brought the animals, who they rescued from abandonment, to provide a little relief from the isolation many elderly people feel, cut off from friends and family due to fear of contagion from the new coronavirus. (Photo by Bruna Prado/AP Photo) 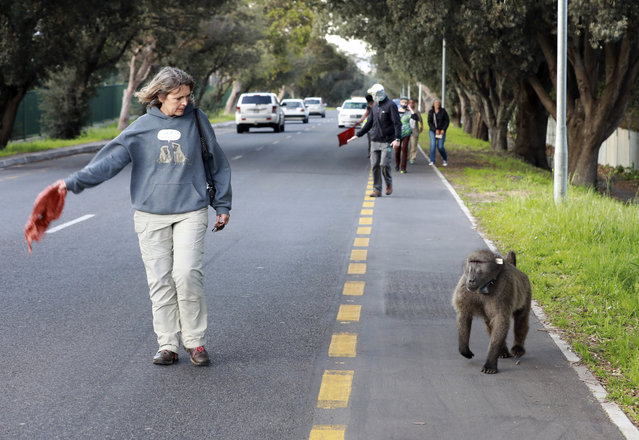 Activist Jenni Trethowan, left, founder of Baboon Matters, protects Kataza from traffic as he roams through in Tokai, Cape Town, South Africa, Thursday, September 17, 2020. Kataza was relocated from Kommetjie, on the edges of Cape Town, to a nearby area late last month after city authorities claimed he was responsible for leading other baboons in his troop on raids through the village. One activist says Kataza is now wandering alone in an unfamiliar area and sleeping in a prison yard. (Photo by Nardus Engelbrecht/AP Photo) 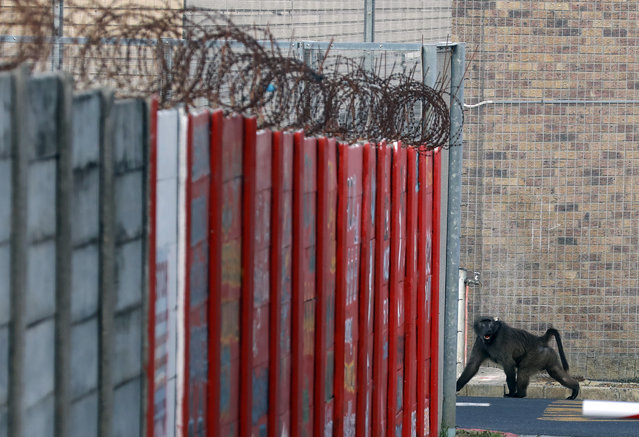 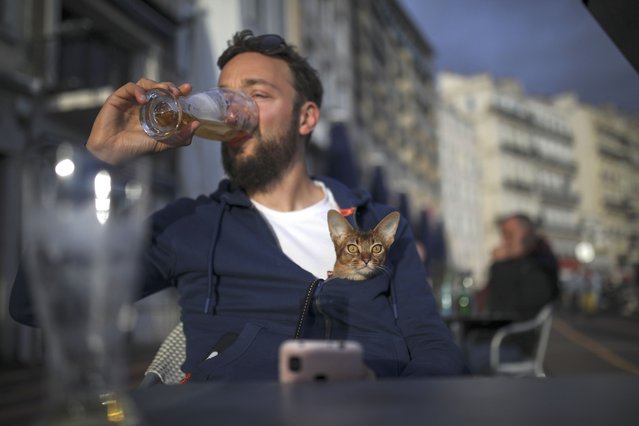 Naguey drinks a final beer with his cat Nela before bars and restaurants close, in Marseille, southern France, Sunday September 27, 2020. As restaurants and bars in Marseille prepared Sunday to shut down for a week as part of scattered new French virus restrictions, Health Minister Olivier Veran insisted that the country plans no fresh lockdowns. (Photo by Daniel Cole/AP Photo) 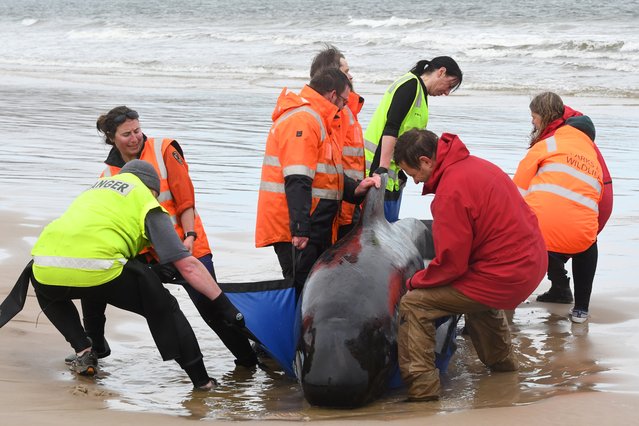 This handout photo taken and received from Brodie Weeding from The Advocate on September 22, 2020 shows rescuers working to save a pod of whales stranded on a beach in Macquarie Harbour on the rugged west coast of Tasmania. Rescuers faced a race against time to save nearly 200 whales stuck in the remote Australian harbour on September 22, hoping to prevent the toll of 90 dead from rising further after managing to free “a small number” of the stranded mammals. (Photo by Brodie Weeding/The Advocate/AFP Photo) 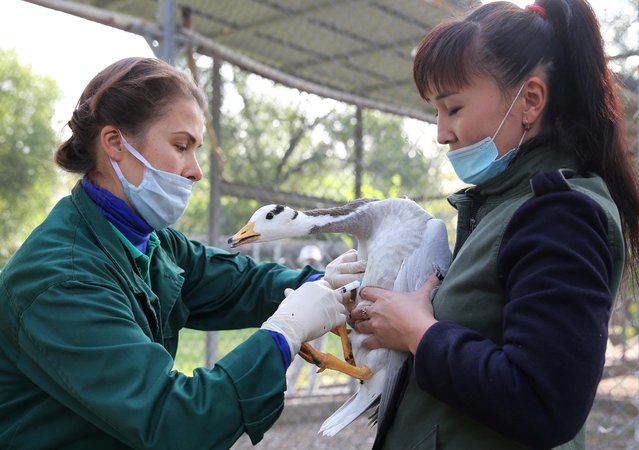 Zookeepers vaccinate a bar-headed goose at a zoo after Kazakhstan reported several outbreaks of highly pathogenic bird flu in the country, in Almaty, Kazakhstan on September 24, 2020. (Photo by Pavel Mikheyev/Reuters) 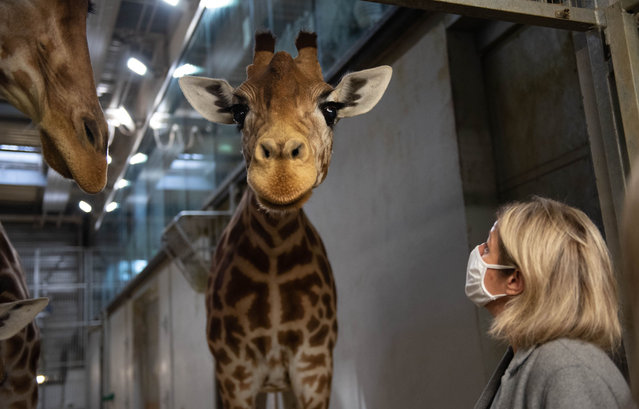 Barbara Pompili, Minister of Ecological Transition visit of the structures dedicated to the care, research and conservation of species in the Paris Zoological Park of the National Museum of Natural History on Tuesday, September 29, 2020. (Photo by Jeanne Accorsini/SIPA Press) 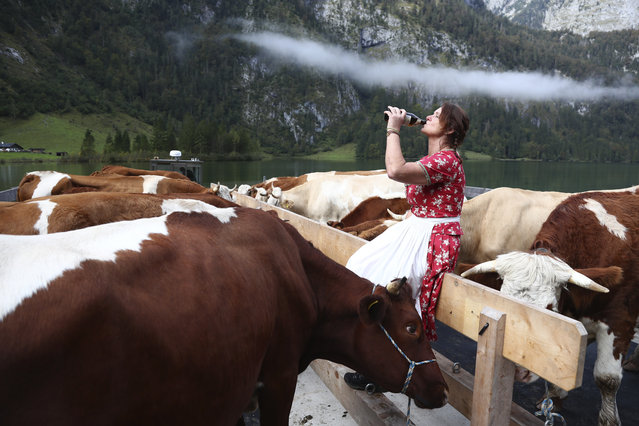 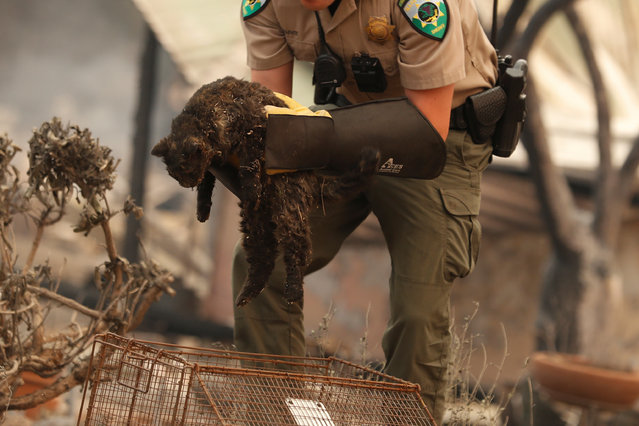 A deputy with the Napa County Sheriff's Office Animal Services Unit carries an injured cat near a property destroyed by the Glass Incident Fire in the Deer Park neighborhood in St. Helena, California, U.S. on September 28, 2020. (Photo by Stephen Lam/Reuters) 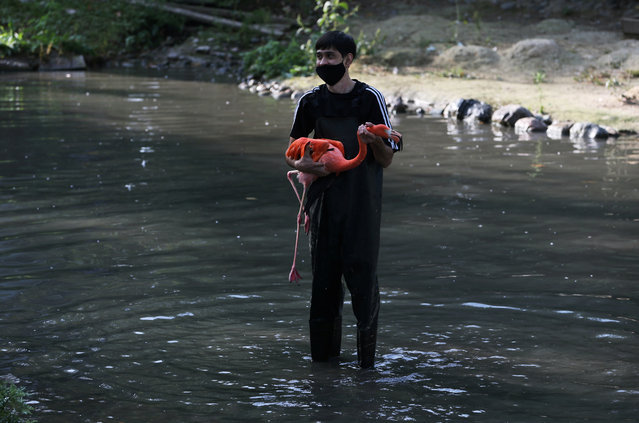 A zookeeper holds a flamingo during the vaccination of birds at a zoo after Kazakhstan reported several outbreaks of highly pathogenic bird flu in the country, in Almaty, Kazakhstan on September 24, 2020. (Photo by Pavel Mikheyev/Reuters) 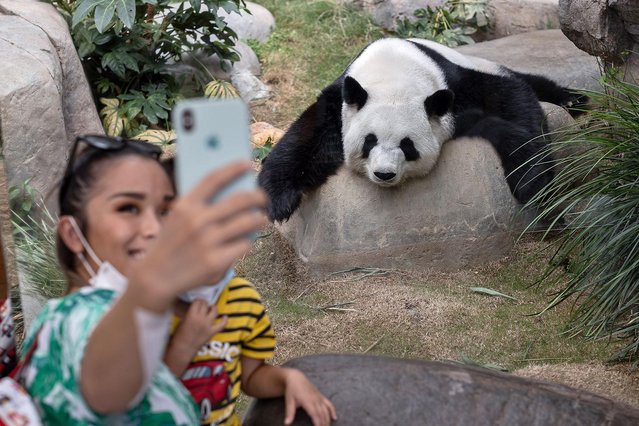 Giant panda Ying Ying rests on a rock in its enclosure while a visitor takes a selfie at Ocean Park in Hong Kong, China, 24 September 2020. An An turned 35 in August. Giant pandas in the wild can live up to 20 years on average, while lifespans of those under human care can reach over 30 years. (Photo by Jerome Favre/EPA/EFE) 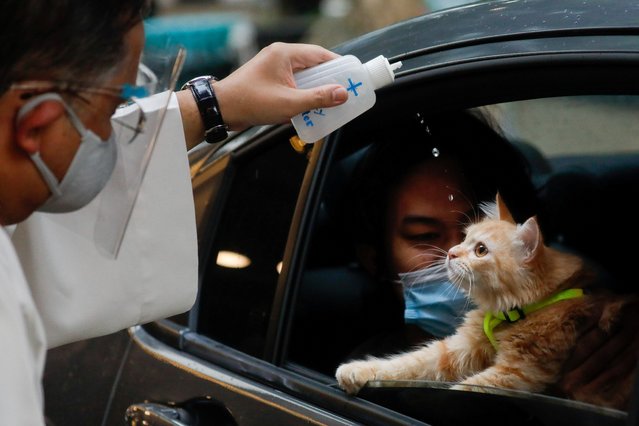 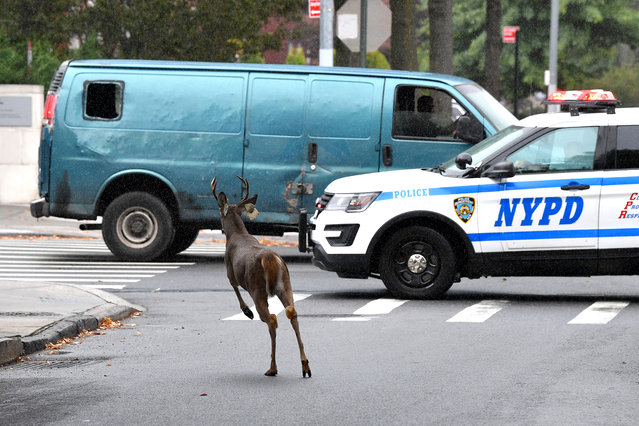 Just after 1PM police were called to Ocean Parkway and Avenue S in Gravesend Brooklyn on September 29, 2020 for a large loose deer in the backyard. The deer was spited on the private corner property. NYPD ESU units and dozens of NYPD officers including medics arrived. As NYPD ESU truck 6 units cornered the deer it jumped through bushes and into Ocean Parkway, crossing 6 lane traffic into another driveway across the street, where ESU was able to shoot the tranquilizer into deer’s right side, at that point the deer just charged at the cops and along the Ocean Parkway service road, southbound. By 2PM, the deer remains loose. (Photo by Paul Martinka/The New York Post)
Edit Del
08 Oct 2020 00:03:00, post received 0 comments
Publication archive:
←   →
Popular tags:
All tags
Last searches: