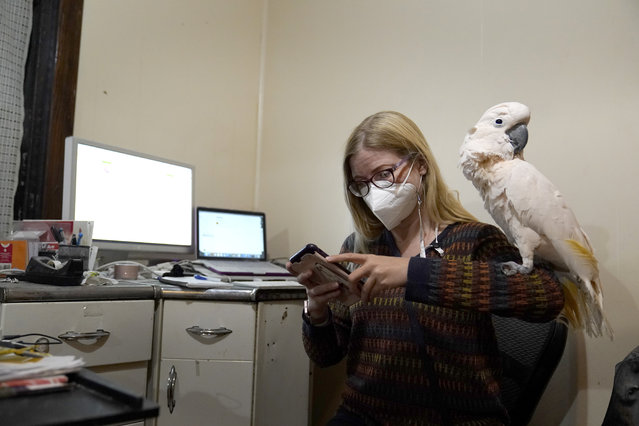 Jessica Murray pauses to look at her phone with her cockatoo Misha on her shoulder while working on website she started to honor lives lost to COVID-19 Thursday, October 29, 2020, in St. Louis. Murray, who works in marketing and sales support for a construction firm and never worked as a writer, has provided mostly short life stories of those who've died in vignettes that are elegant and moving in their simplicity. (Photo by Jeff Roberson/AP Photo) 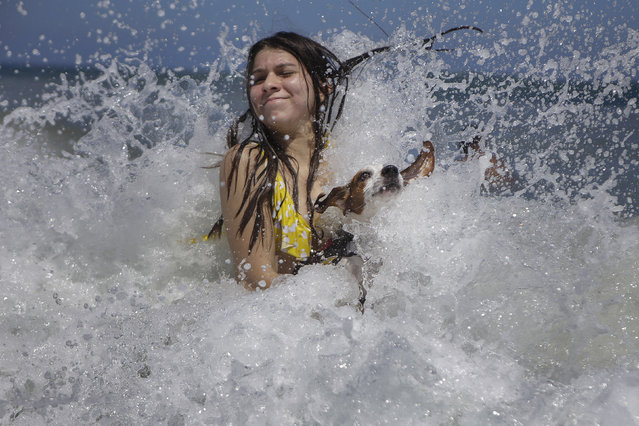 Mariana Rojas plays with her dog Sussy in the waves off Los Angeles beach after it recently reopened following a lockdown to contain the spread of COVID-19 in La Guaira, Venezuela, Friday, October 23, 2020. Strict quarantine restrictions forced the closure of beaches across the country in March and reopened this week. (Photo by Matias Delacroix/AP Photo) 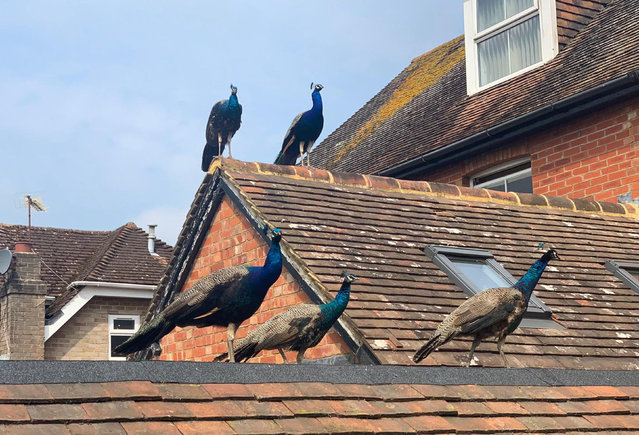 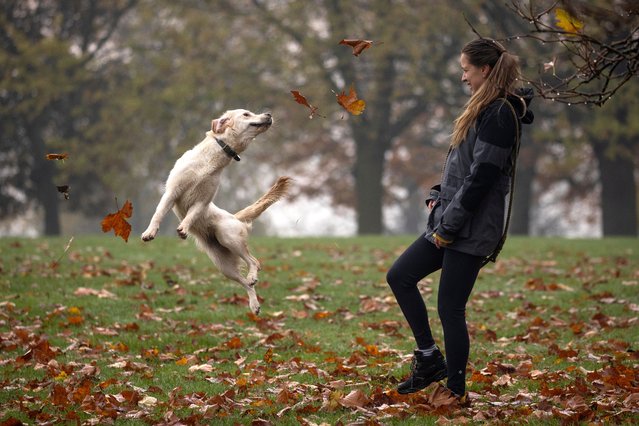 Mariana kicks leaves for her dog Narla in Hilly Fields on November 06, 2020 in London, England (Photo by Dan Kitwood/Getty Images) 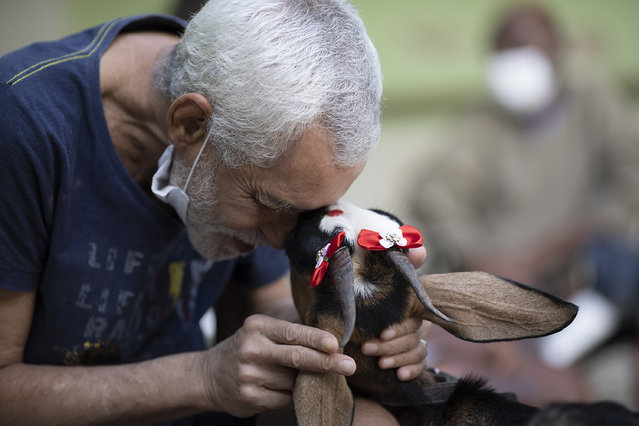 An elderly man caresses a goat named Jurema, wearing ribbons on her ears, at the Maria Vieira Bazani nursing home in Rio de Janeiro, Brazil, Thursday, October 22, 2020. The NGO Golias brought several animals, who they rescued from abandonment, to provide relief from the isolation many elderly people feel, cut off from friends and family due to fear of contagion from the new coronavirus. (Photo by Silvia Izquierdo/AP Photo) 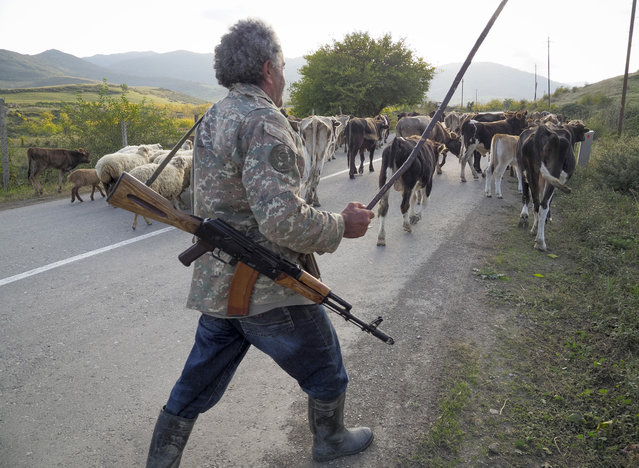 Shepherd Kim Mkrtchian armed with a Kalashnikov drives cows and sheep away from the front line near the town of Martuni, the separatist region of Nagorno-Karabakh, Friday, October 23, 2020. Heavy fighting over Nagorno-Karabakh is continuing with Armenia and Azerbaijan trading blame for new attacks. Two Russia-brokered cease-fires collapsed instantly after taking effect, and the warring parties have continued to exchange blows with heavy artillery, rockets and drones. (Photo by AP Photo/Stringer) 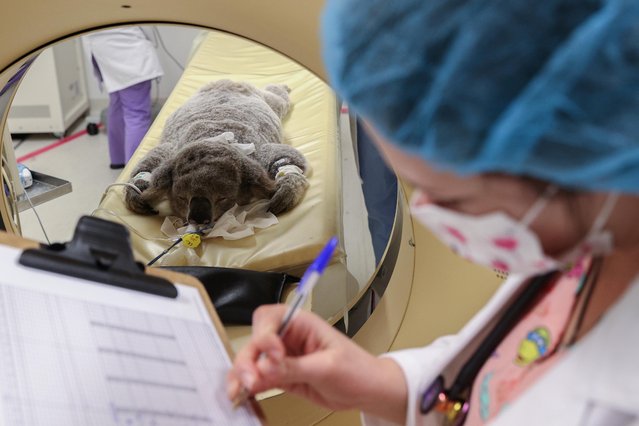 A sick koala named Wally, rescued by the animal rescue agency, Wildlife Information, Rescue and Education Service, also knows as WIRES, on the outskirts of Sydney in an area where urban development is encroaching on koala habitat, is treated as part of a rehabilitation process at Sydney University Veterinary Teaching Hospital in Sydney, Australia, July 10, 2020. (Photo by Loren Elliott/Reuters) 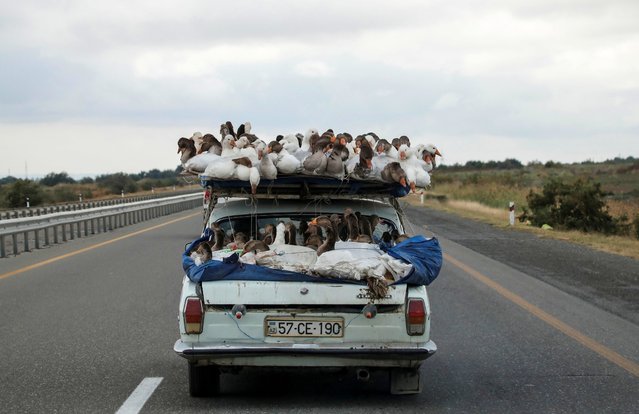 A man carries geese on top of his car as he drives on a highway that leads to the city of Ganja, Azerbaijan on October 21 2020. (Photo by Umit Bektas/Reuters) 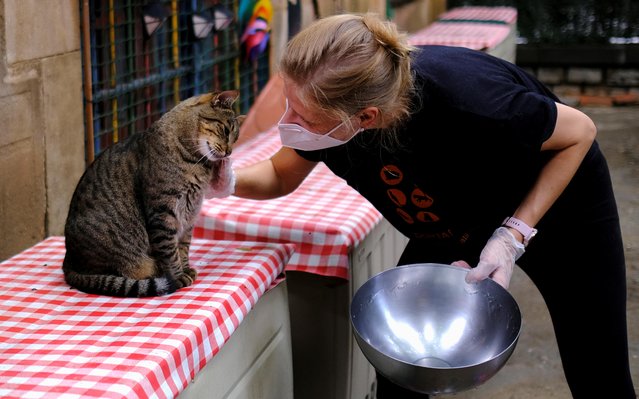 A volunteer pets a four-year-old street-born Zipi, a cat that serves to socialise other cats as they mirror his behaviour in accepting petting and food at El Jardinet dels Gats (Cats' Garden) in the Raval district, amid the coronavirus disease (COVID-19) outbreak, in Barcelona, Spain on September 21, 2020. (Photo by Nacho Doce/Reuters) 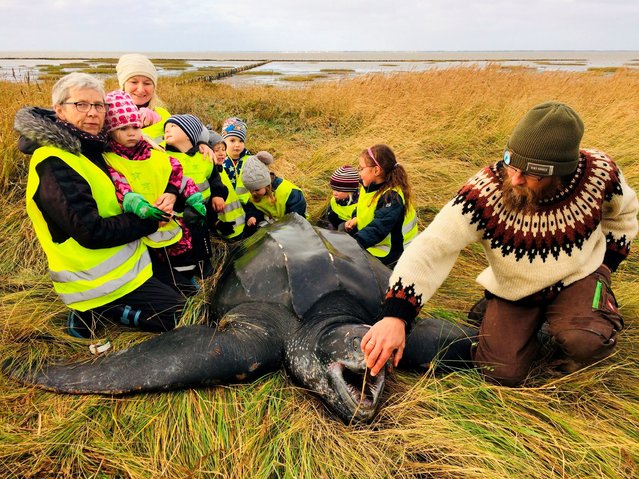 Children gather around a giant leatherback turtle that they found on a seashore in southern Jutland, Denmark on November 3, 2020. (Photo by Ritzau Scanpix via Reuters) 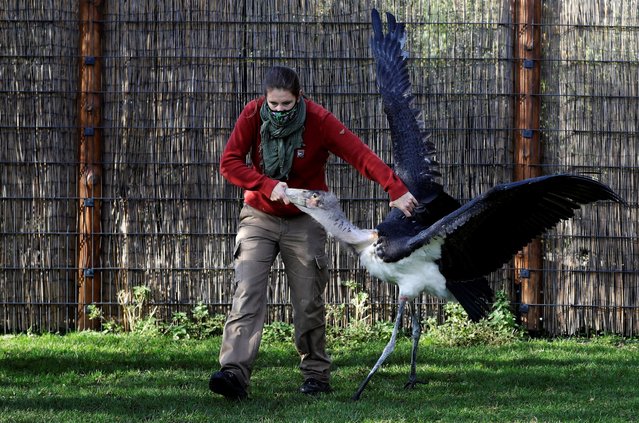 A zoo keeper catches a marabou stork to move it to its winter enclosure at closed Prague Zoo amid coronavirus disease (COVID-19) restrictions in Prague, Czech Republic, November 5, 2020. (Photo by David W. Cerny/Reuters) 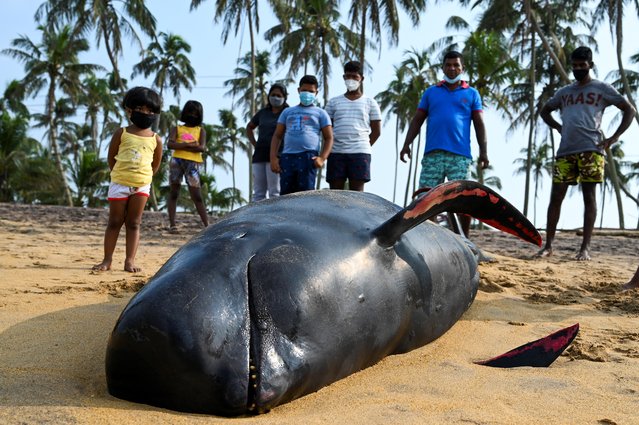 People look at a dead pilot whale on a beach in Panadura on November 3, 2020. Rescuers and volunteers were racing since November 2 to save about 100 pilot whales stranded on Sri Lanka's western coast in the island nation's biggest-ever mass beaching. (Photo by Lakruwan Wanniarachchi/AFP Photo) 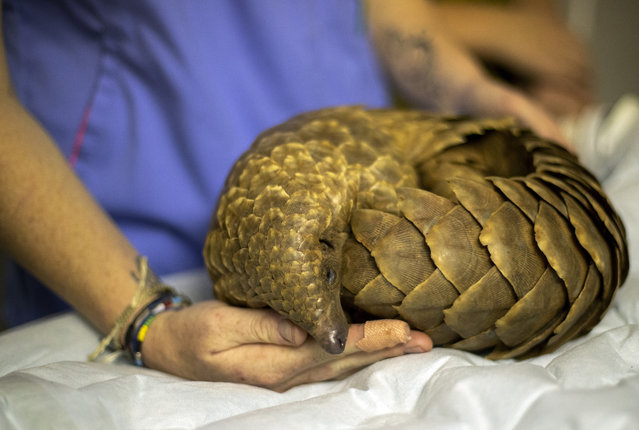 Veterinary nurse, Alicia Abbott, of the African Pangolin Working Group in South Africa examines a pangolin, at a Wildlife Veterinary Hospital in Johannesburg, South Africa, Sunday, October 18, 2020. The group have been rehabilitating pangolins rescued from poachers for nearly a decade. (Photo by Themba Hadebe/AP Photo) 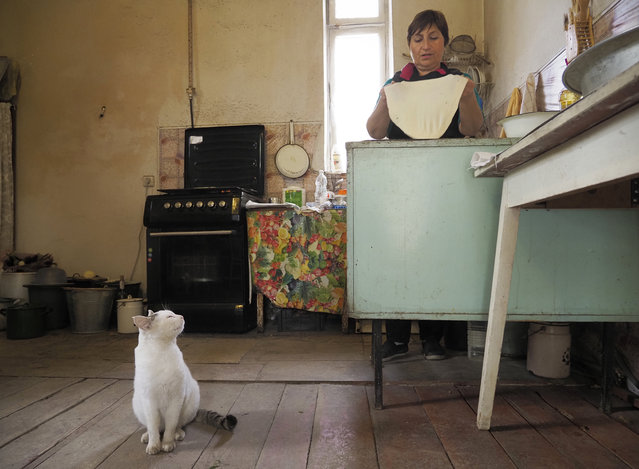 Baker Alla Mayrik prepares to bake bread for the soldiers on the frontline in Askeran, the separatist region of Nagorno-Karabakh, Thursday, October 22, 2020. Heavy fighting over Nagorno-Karabakh continued Thursday with Armenia and Azerbaijan trading blame for new attacks, hostilities that raised the threat of Turkey and Russia being drawn into the conflict. (Photo by AP Photo/Stringer) 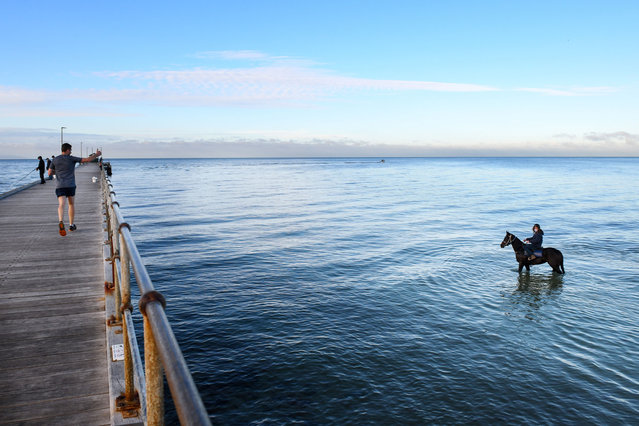 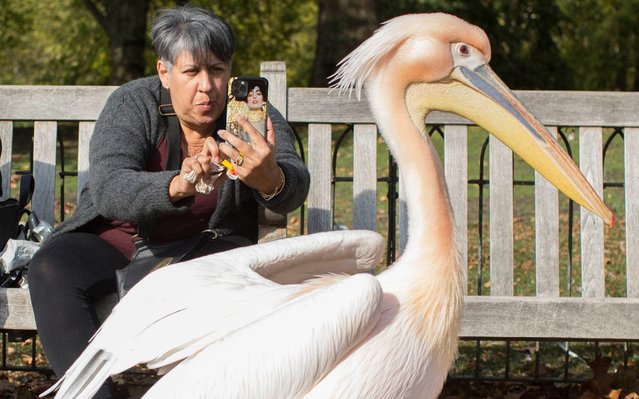 Members of the public are given some company by a handful of pelicans in St James's Park, London, United Kingdom on October 18, 2020. Pelicans have been a feature of the park since a Russian ambassador donated them to Charles II in 1664. (Photo by Rick Findler/The Telegraph)
Edit Del
08 Nov 2020 00:05:00, post received 0 comments
Publication archive:
←   →
Popular tags:
All tags
Last searches: