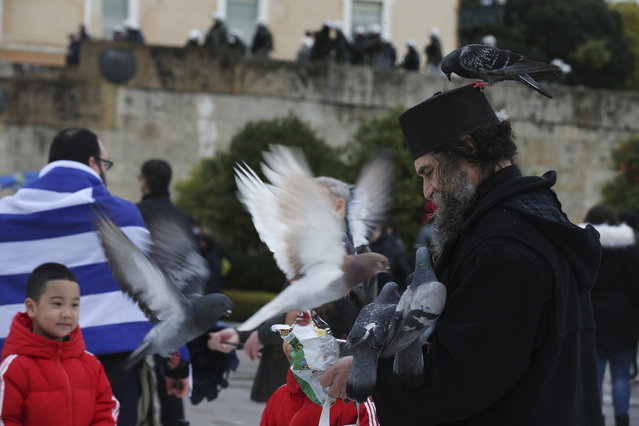 Tourists watch as a Christian orthodox monk, opponent of the Prespa Agreement, participating in a protest rally, feeds pigeons outside the Greek Parliament, in Athens, Friday, January 25, 2019. Greek lawmakers have ratified the agreement for the country to drop its objections to neighbouring Macedonia joining NATO if the small country's name is changed to North Macedonia, aiming to end a nearly three decade-long dispute that has kept Macedonia from joining the western military alliance and the European Union. (Photo by Petros Giannakouris/AP Photo) 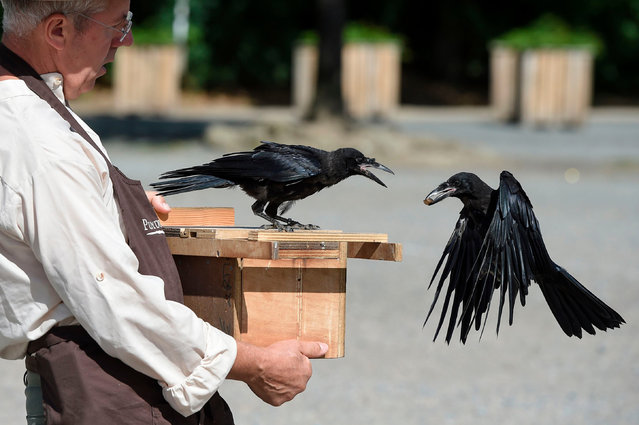 Christophe Gaborit, in charge of the falconry at Le Puy du Fou theme park looks at two of his crows, trained to collect cigarette ends and wastes on the parking of Le Puy du Fou, in Les Epesses, western France on August 14, 2018. Six crows specially trained to pick up cigarette ends and rubbish were put to work last week at a French historical theme park. (Photo by Sebastien Salom Gomis/AFP Photo) 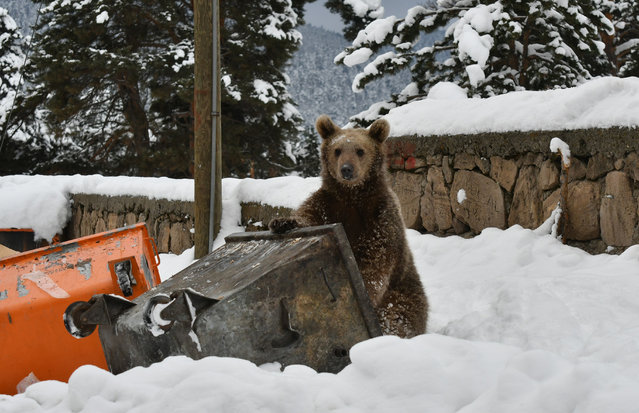 A baby grizzly bear, which didn't hibernate, searches for food around a trash container in Inonu neighbourhood in Sarikamis district of Turkey's northeastern Kars Province on December 15, 2018. (Photo by Huseyin Demirci/Anadolu Agency/Getty Images) 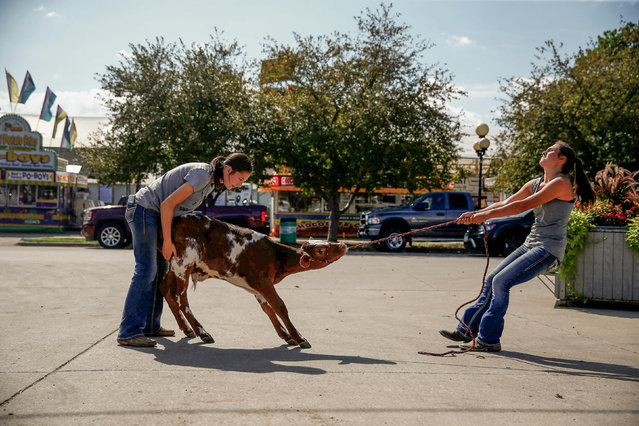 Women lead a calf as people prepare for the Iowa State Fair in Des Moines, Iowa, U.S. on August 7, 2019. (Photo by Eric Thayer/Reuters) 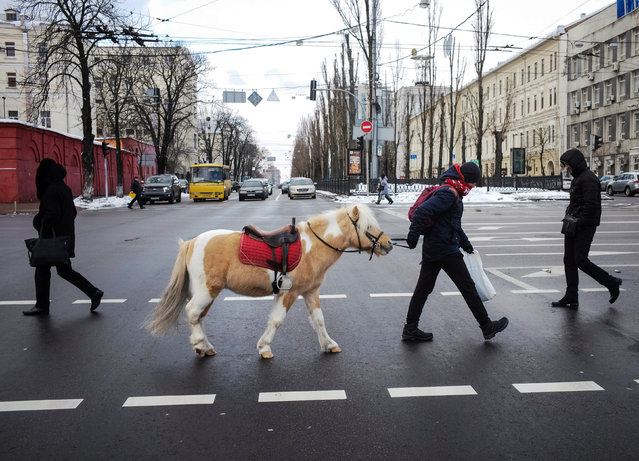 A man with a pony walks on a pedestrian crossing in central Kiev, Ukraine January 3, 2019. (Photo by Gleb Garanich/Reuters) 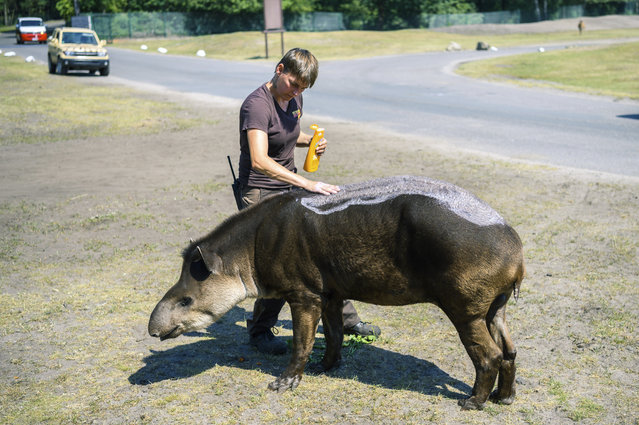 An animal keeper puts suntan lotion on a lowland tapir during the hot summer weather in an animal park in Hodenhagen, Germany, Wednesday, June 26, 2019. Germany faces a heatwave with high temperatures and UV radiation. (Photo by Mohssen Assanimoghaddam/dpa via AP Photo) 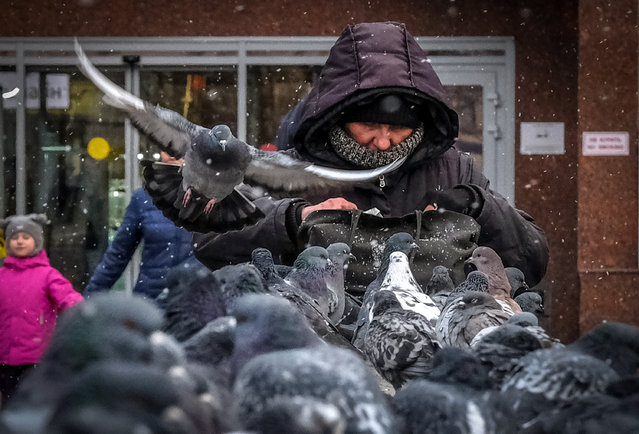 A woman looks into her bag by a flock of pigeons in Moscow on November 26, 2018. (Photo by Yuri Kadobnov/AFP Photo) 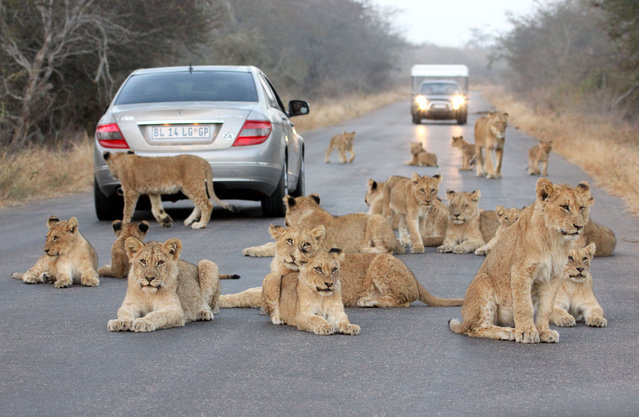 Retired bank exec, Geoffrey Veenendaal, 68, was thrilled to photograph the pride of wild lions as they disrupted his journey while travelling deep in the Kruger National Park, South Africa. Amateur photographer Geoffrey, from Cape Town, said the pack of five big cats stepped out of the bush before resting in the middle of the road, where they were joined by lionesses and their cubs. The wildlife enthusiast said it was the first mass sighting he had ever encountered. (Photo by Geoffrey Veenendaal/Caters News Agency) 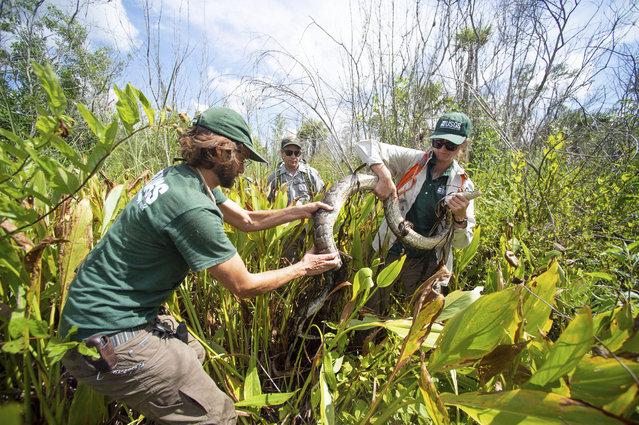 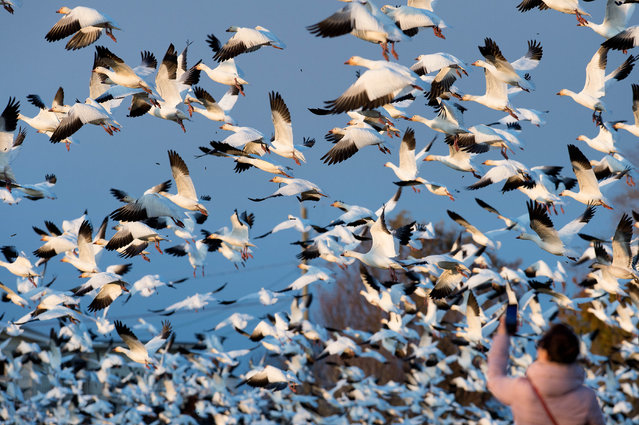 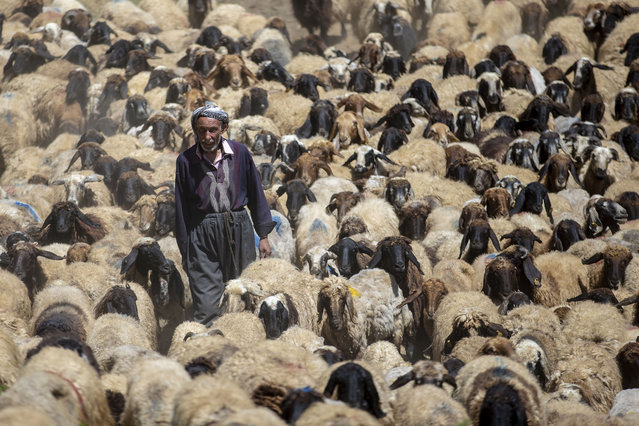 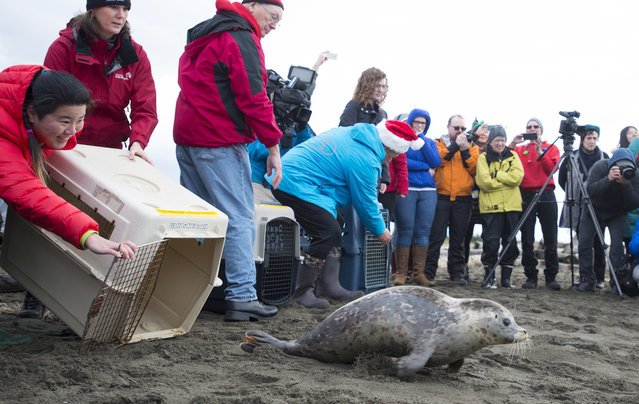 Seal pups are released back into the ocean from Iona Beach in Richmond, British Columbia, Tuesday, December 18, 2018. The seals, who were rescued following different injuries throughout the year, were nursed back to health by the Vancouver Aquarium Marine Mammal Rescue Center. (Photo by Jonathan Hayward/The Canadian Press via AP Photo) 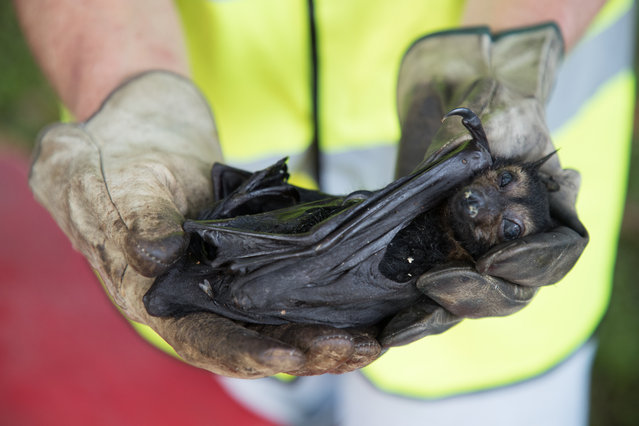 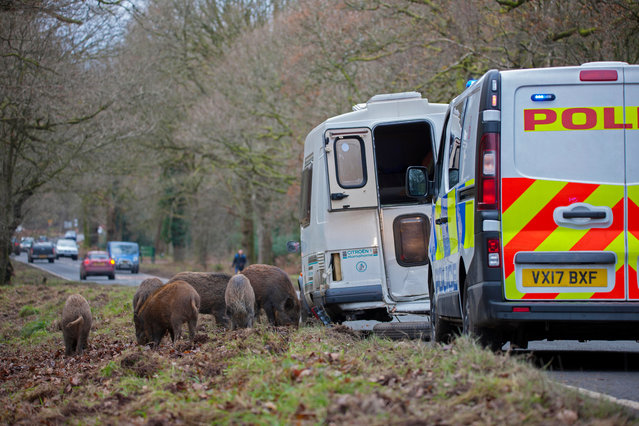 A herd of wild boar alongside traffic in the Forest of Dean. Six animal rights groups have strongly criticised plans by the National Trust to cull wild boar on one of its most renowned estates. (Photo by Brian McGeough/Alamy Stock Photo) 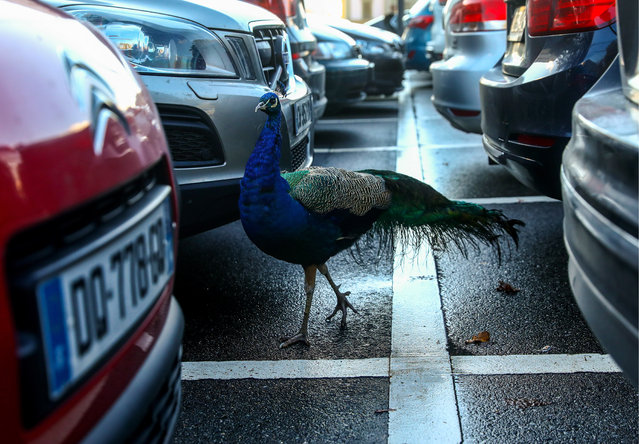 A peacock between parked cars by the Palace of Nations in Geneva, Switzerland on December 11, 2018. (Photo by Valery Sharifulin/TASS) 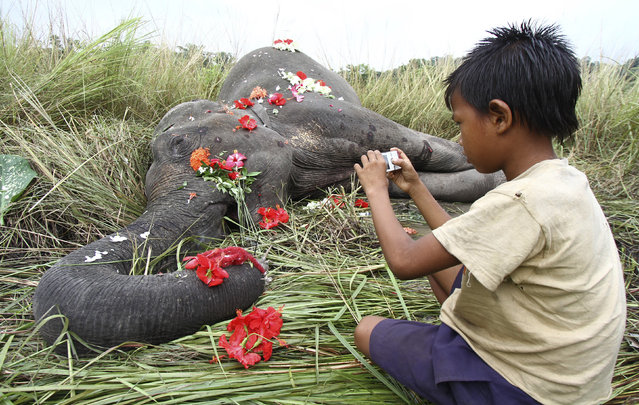 A boy uses a mobile phone to take photographs of the body of a female elephant near Panbari railway station, about 50 km (31 miles) east from Guwahati in the northeastern Indian state of Assam September 1, 2012. A female elephant died on Friday night after it was hit by a passenger train while crossing a railway track, forest officials said. (Photo by Utpal Baruah/Reuters) 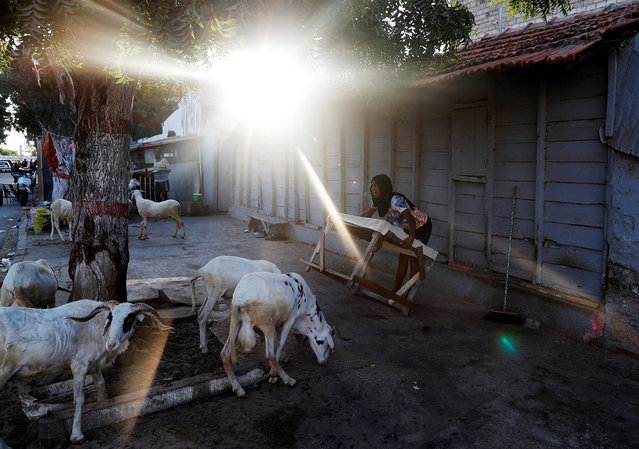 A woman street vendor prepares her stall outside her house in Medina neignbor of Dakar, Senegal on December 11, 2018. (Photo by Zohra Bensemra/Reuters) 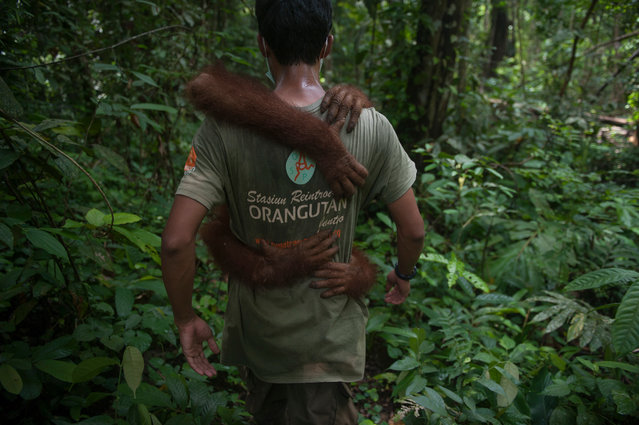 Leo, an orphaned Sumatran orangutan, is taken to the Sumatran Orangutan Conservation Programme rehabilitation centre. Leo will join other orangutans who have been reintroduced to the Pinus Jantho nature reserve. The SOCP has gradually formed a completely new wild population of species that have been threatened with extinction. (Photo by Sutanta Aditya/Barcroft Images) 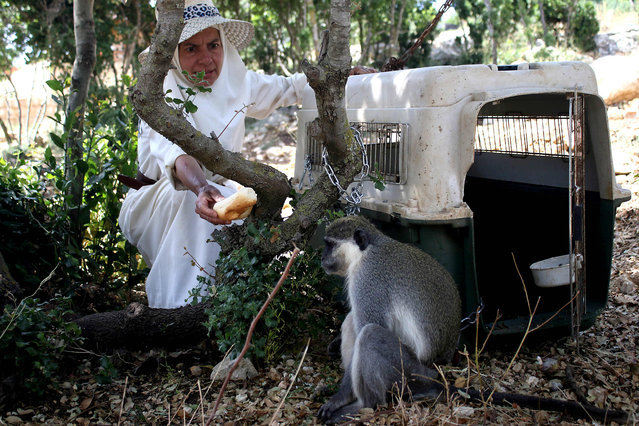 The monkey Tachtouch is being fed by its French owner Beatrice Mauger in Al Qouzah, southern Lebanon on June 7, 2019. A Lebanese monkey who breached the border with Israel was returned to its owner on June 7 by United Nations peacekeepers after cavorting for more than a week in enemy territory. Its owner, a French nun who describes herself as a "virgin hermit", was quick to see the primate's escapade across one of the world's most tense borders as a message of peace. Tachtouch escaped late last month, prompting its owner Beatrice Mauger who runs a peace project in southern Lebanon to launch an appeal on Facebook. (Photo by Mahmoud Zayyat/AFP Photo) 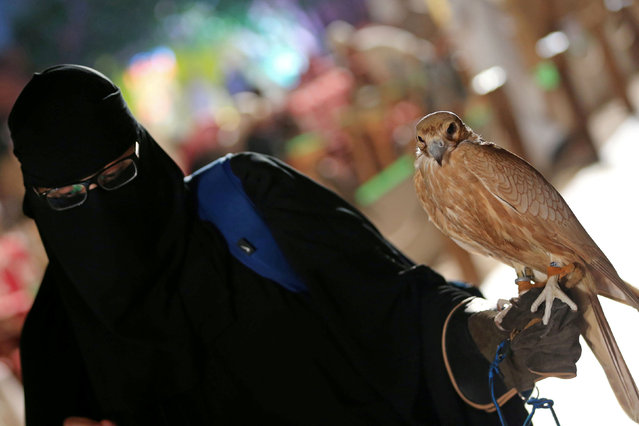