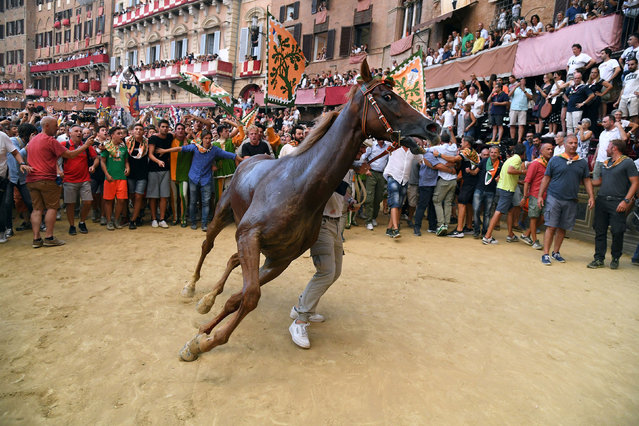 A member of the “Selva” (Forest) parish is seen with horse Remorex after winning the historical Palio of Siena horse race, in Siena, Italy on August 16, 2019. (Photo by Alberto Lingria/Reuters) 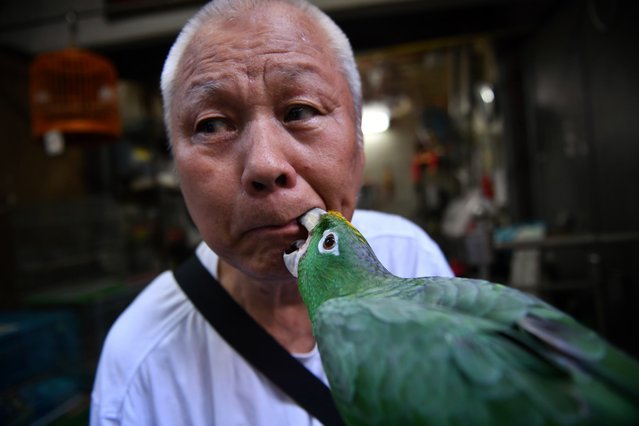 A bird breeder kisses a green macaw at the bird market in Hong Kong on August 27, 2019. (Photo by Lillian Suwanrumpha/AFP Photo) 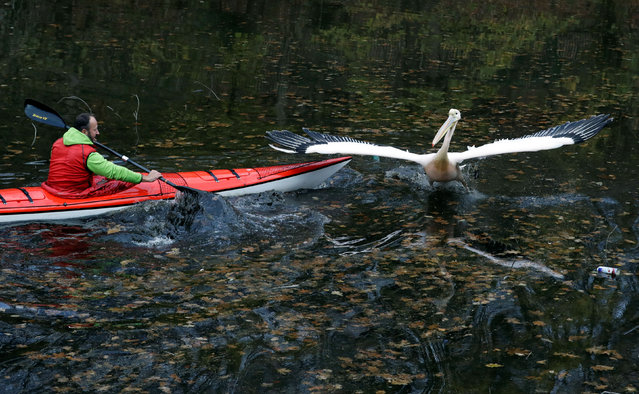 A zoo keeper catches a pelican to move it to its winter enclosure at Liberec Zoo in Liberec, Czech Republic on November 6, 2019. (Photo by David W. Cerny/Reuters) 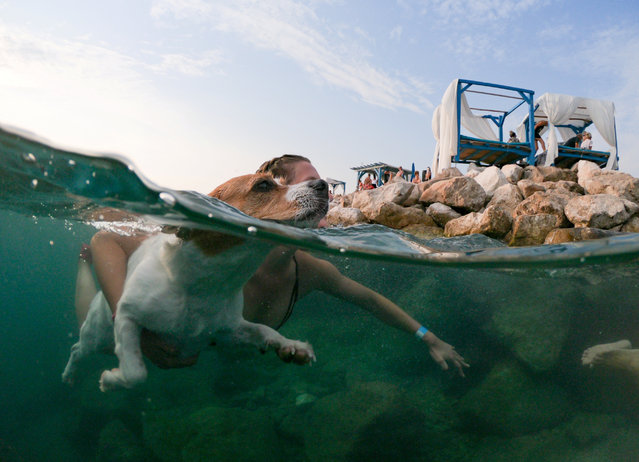 A dog and its owner take part in the “Underdog 2019” beach race in Crikvenica, Croatia, August 25, 2019. (Photo by Antonio Bronic/Reuters) 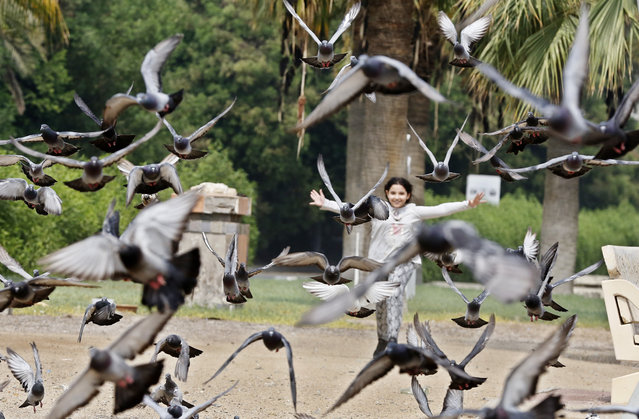 A girl runs towards pigeons in a public park, in Jiddah, Saudi Arabia, Friday, October 25, 2019. (Photo by Amr Nabil/AP Photo) 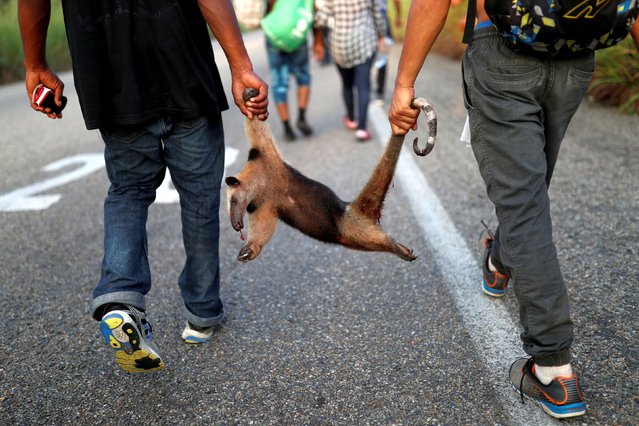 Migrants, part of a caravan traveling en route to the United States, carry an anteater that was hit by a car, according to them, as they walk on the road that links Arriaga and Tapanatepec, near Arriaga, Mexico, November 5, 2018. (Photo by Carlos Garcia Rawlins/Reuters) 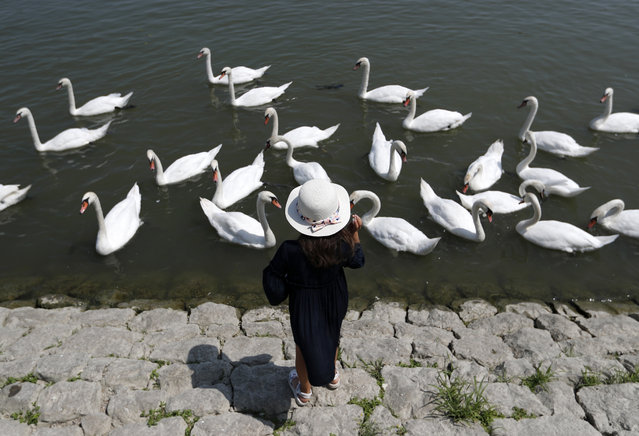 A girl feeds swans on the bank of the Danube river in Belgrade, Serbia, Friday, August 9, 2019. (Photo by Darko Vojinovic/AP Photo) 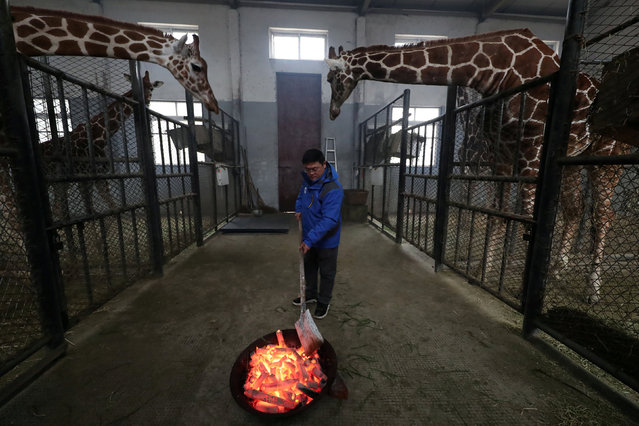 A worker lights a brazier on a cold winter day at an enclosure for giraffes inside a zoo in Ningbo, Zhejiang province, China December 28, 2018. (Photo by Reuters/China Stringer Network) 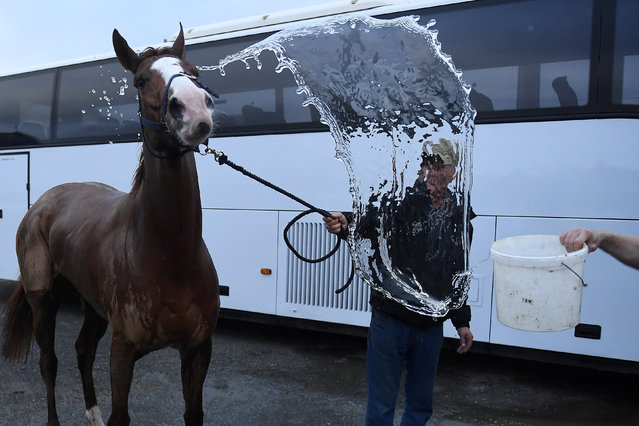 Water is thrown on a horse called Mayday held by Sean McGillacuddy after racing in the 50th anniversary of the Christmas beach races in Ballyheigue, Ireland December 30, 2018. (Photo by Clodagh Kilcoyne/Reuters) 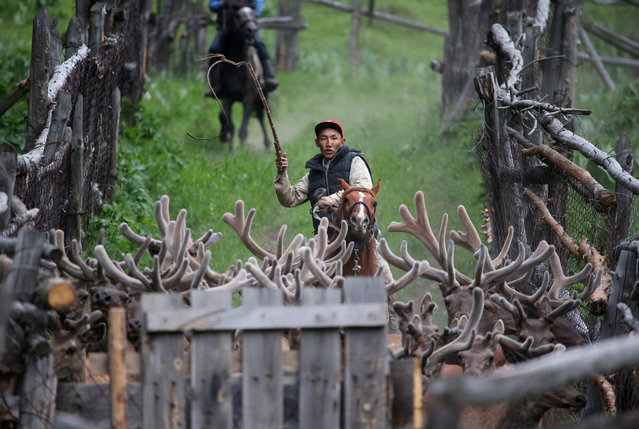 A breeder drives deers at “Alatau Maraly” farm in Kasymbek gorge, Almaty region, Kazakhstan on June 1, 2019. Maral stags at this private farm undergo an annual cutting off their antlers to be sold to pharmaceutical companies. (Photo by Pavel Mikheyev/Reuters) 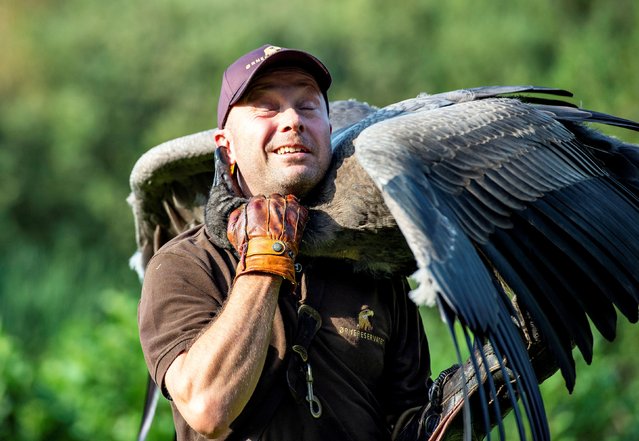 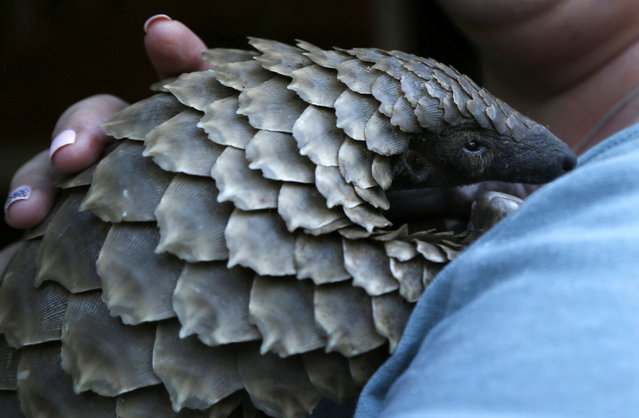 In this Friday, March 16, 2018 file photo, a pangolin from the Johannesburg Wildlife Veterinary Hospital is taken to a nearby field to forage for food near Johannesburg. Their scales – made of keratin, the same material as in human finger nails – are in high demand for Chinese traditional medicine, to allegedly cure several ailments, although there is no scientific backing for these beliefs. (Photo by Firdia Lisnawati/AP Photo) 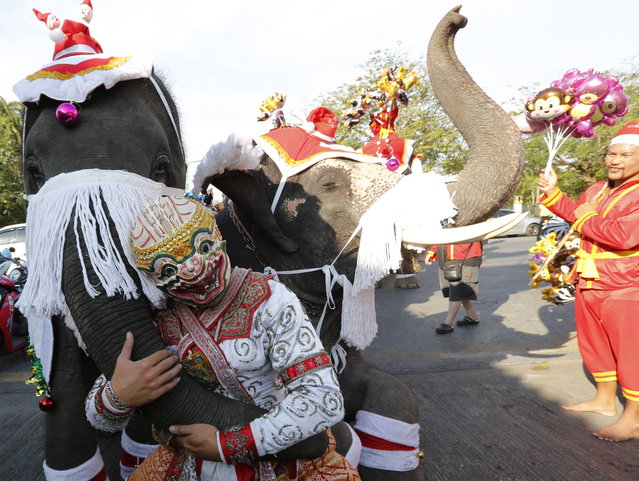 A Thai man wearing a costume depicting Hanuman, a charecter in the traditional Khon or Thai masked dance, poses for pictures with elephants dressed as Santa Claus, during Christmas celebrations with students at a school in the world heritage city of Ayutthaya, north of Bangkok, Thailand, 24 December 2018. The annual event is held every year for to celebrate the upcoming Christmas festive season and promote tourism in Ayutthaya. (Photo by Narong Sangnak/EPA/EFE) 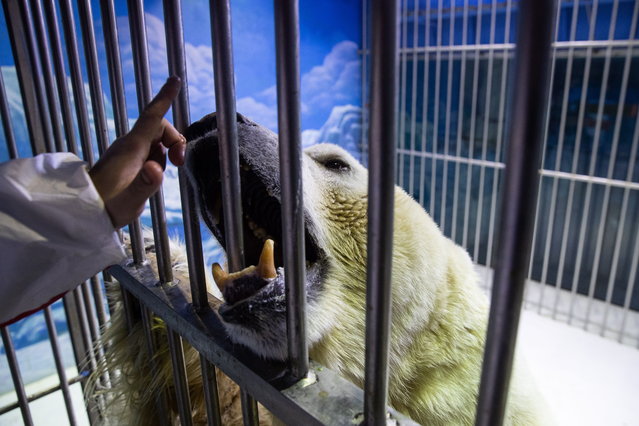 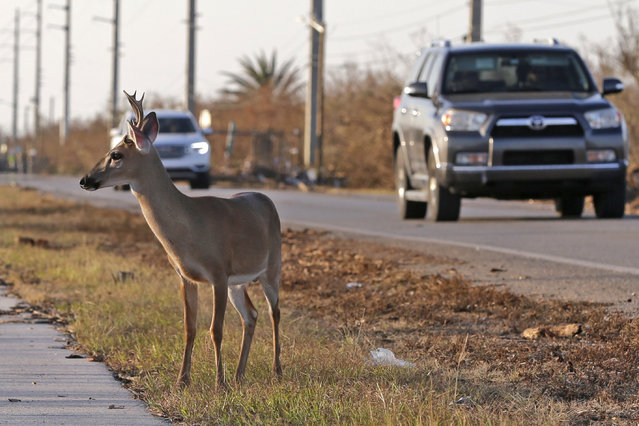 In this Wednesday, September 13, 2017, file photo, a Florida Key deer stands on the side of Overseas Highway in the aftermath of Hurricane Irma in Big Pine Key, Fla. The endangered deer's protection with the Endangered Species Act is intended to be stripped by the US Fish and Wildlife Service. A letter from the agency shows that the Service made a determination that there is no more threat to the deer, which is beloved by locals. (Photo by Alan Diaz/AP Photo/File) 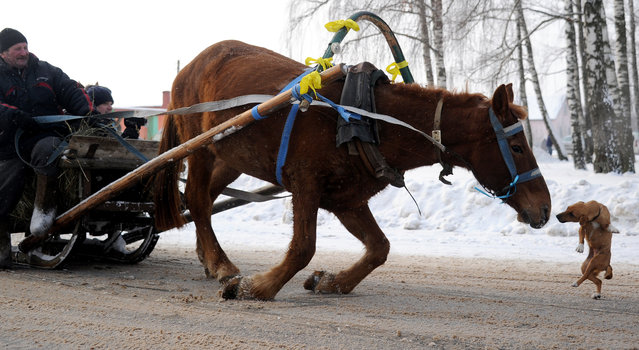 A dog rushes at a horse as it slips on the icy road during the Kolyada holiday celebrations (Pull Kalyada to the oak) in the village of Martsiyanauka, some 110 kilometers east of Minsk, on January 21, 2016. (Photo by Sergei Gapon/AFP Photo) 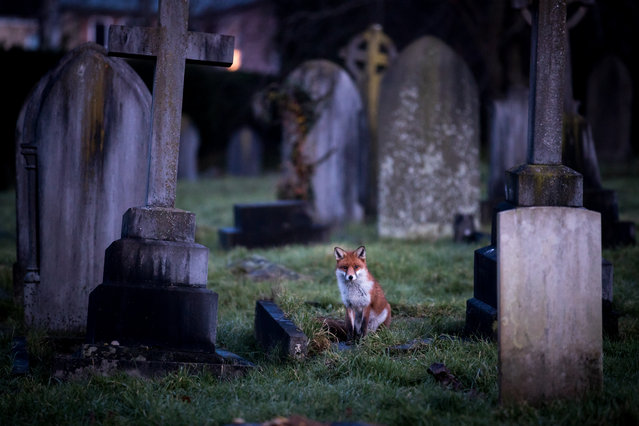 A fox walks through a cemetery at dusk on January 10, 2018 in Bath, England. Although the number of foxes in the UK is actually on the decline, according to a recent study the number of urban foxes in England has quadrupled in the past 20 years with an estimated 150,000 foxes in England, or about one for every 300 urban residents. (Photo by Matt Cardy/Getty Images) 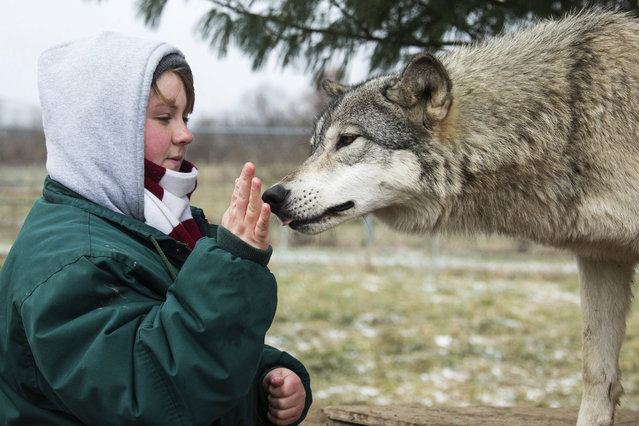 In this December 2018 file photo provided by Wolf Park, intern Alexandra Black pets Niko the wolf at Wolf Park in Battle Ground, Ind. A witness told authorities that a gate blocked by a ball at a North Carolina animal preserve allowed a lion to reach three people cleaning an enclosure and begin a fatal attack, biting Black's ankle and pulling her into the enclosure, according to a medical examiner’s report. (Photo by Monty Sloan/Wolf Park via AP Photo) 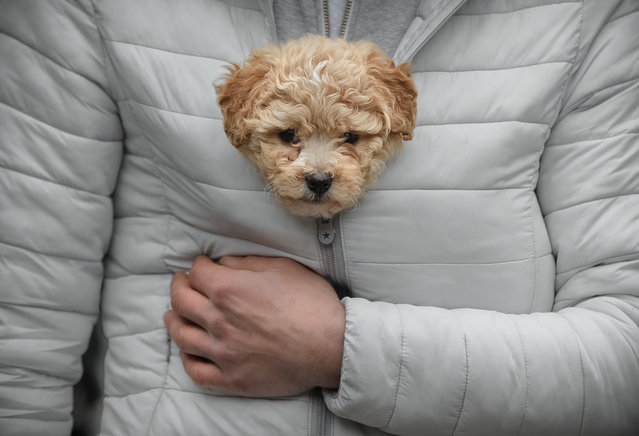