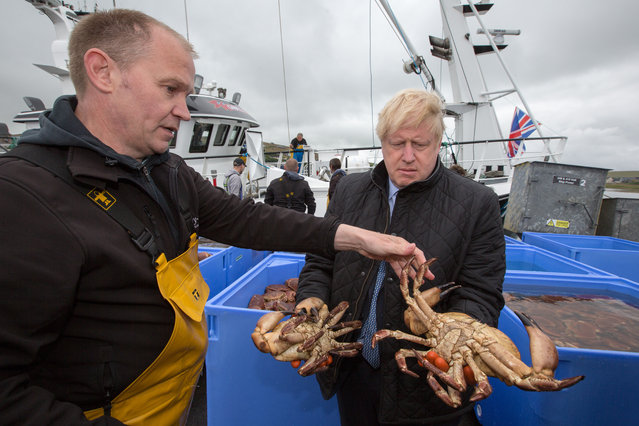 British Prime Minister Boris Johnson holds a crab caught on the Carvela with Karl Adamson at Stromness Harbour on July 23, 2020 in Stromness, Scotland. This week marks one year as U.K. Prime Minister for Conservative Party leader Boris Johnson. Today he is visiting businesses in the Orkney Islands in Scotland to reaffirm his commitment to supporting all parts of the UK through the Coronavirus pandemic. Later he will visit a military base in Moray to thank Military personnel for their service. (Photo by Robert Perry – WPA Pool/Getty Images) 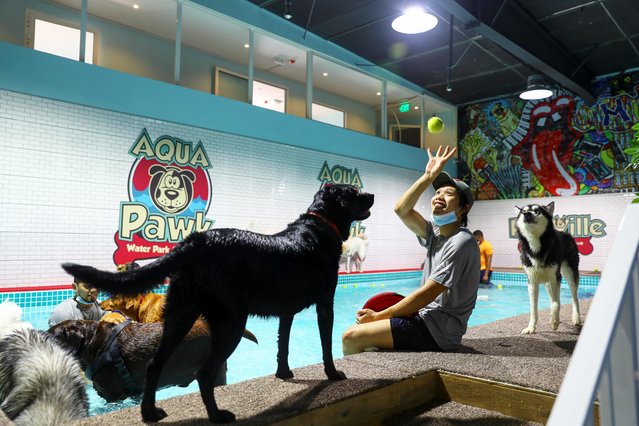 A dog-sitter plays with a dog at “Aqua Pawk”, the first, newly-opened water park for dogs, after easing of the coronavirus disease (COVID-19) restrictions in Dubai, United Arab Emirates on July 23, 2020. (Photo by Ahmed Jadallah/Reuters) 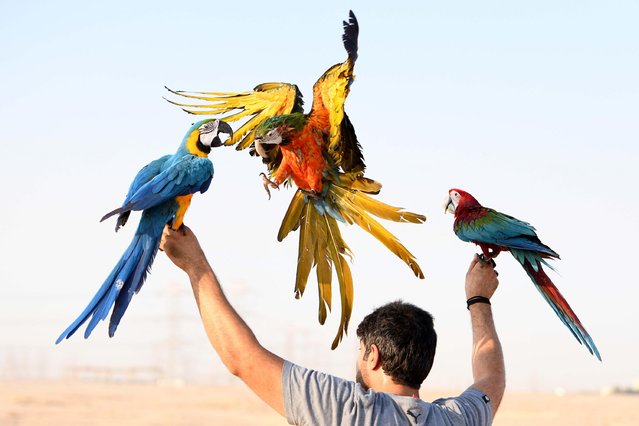 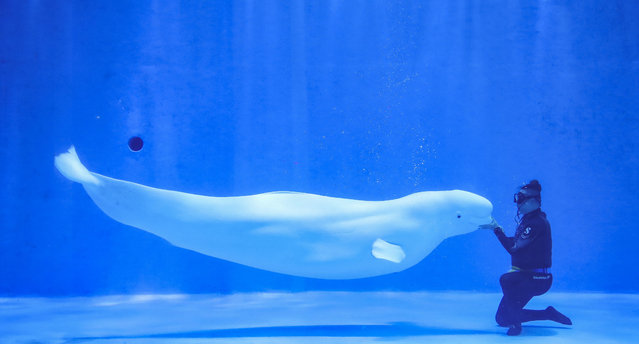 A beluga whale paddles in the Dragon Palace in Huaian, Jiangsu Province, on July 23, 2020. On a hot summer day, go to the Ocean Pavilion for cooling. (Photo by Sipa Asia/Rex Features/Shutterstock) 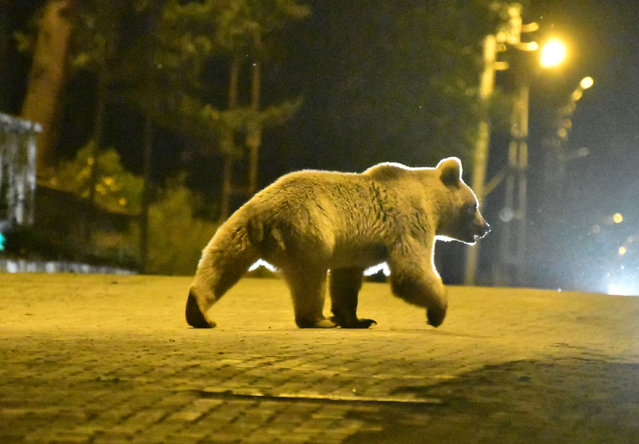 A brown bear searches for food in Sarikamis district of Kars province, Turkey on July 12, 2020. (Photo by Huseyin Demirci/Anadolu Agency via Getty Images) 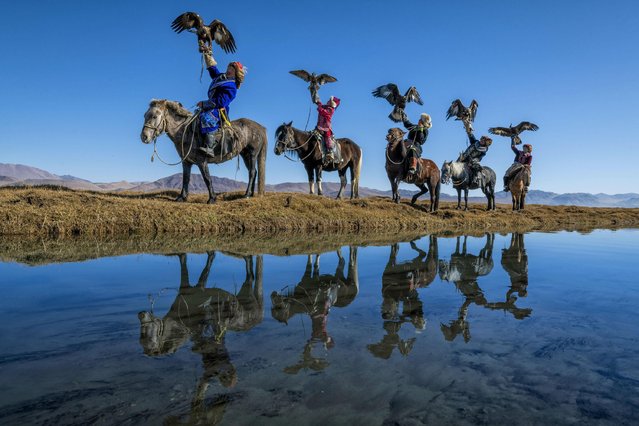 It takes five years for these Mongolian hunters to form a strong rapport with their golden eagles. The birds are eventually rewarded with their freedom. (Photo by Zay Yar Lin/Solent News) 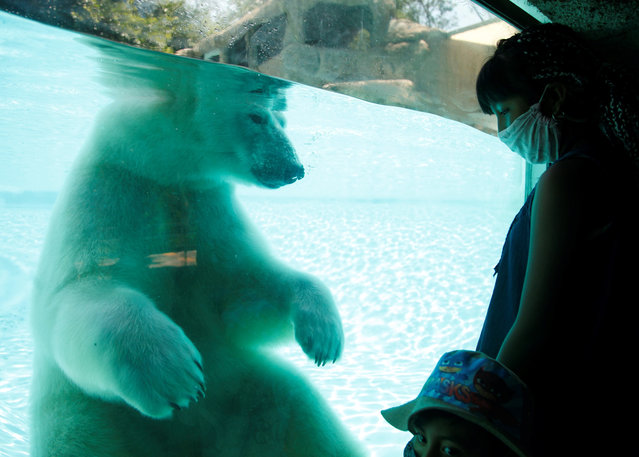 People observe a Polar Bear during the reopening to the public of the Guadalajara Zoo, in the state of Jalisco, Mexico, 20 July 2020. The Guadalajara zoo reopened its doors to the public after being closed for four months due to the coronavirus pandemic. (Photo by Francisco Guasco/EPA/EFE) 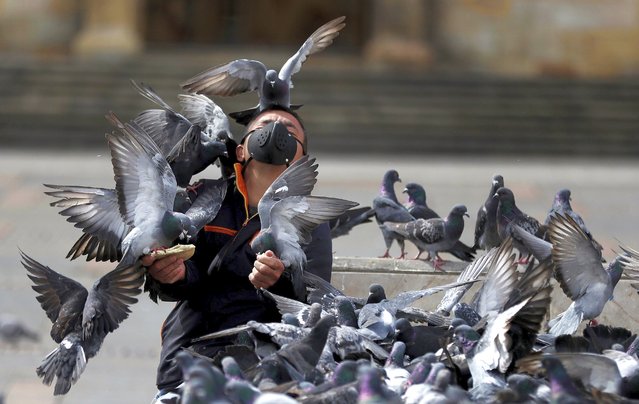 A man wearing a protective face mask feeds a flock of pigeons at Bolivar Square in Bogota, Colombia, Tuesday, July 21, 2020, amid the new coronavirus pandemic. (Photo by Fernando Vergara/AP Photo) 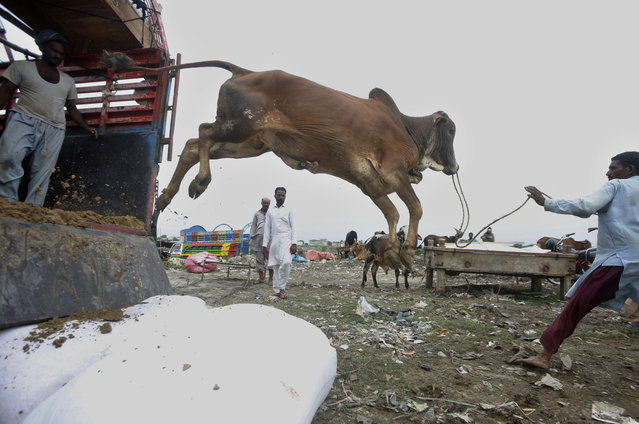 Vendors unload a bull after arriving at a cattle market set up for the upcoming Muslim festival of Eid al-Adha in Lahore, Pakistan, Monday, July 20, 2020. Eid al-Adha, or Feast of Sacrifice, is the most important Islamic holiday marks the willingness of the Prophet Ibrahim (Abraham to Christians and Jews) to sacrifice his son. (Photo by K.M. Chaudary/AP Photo) 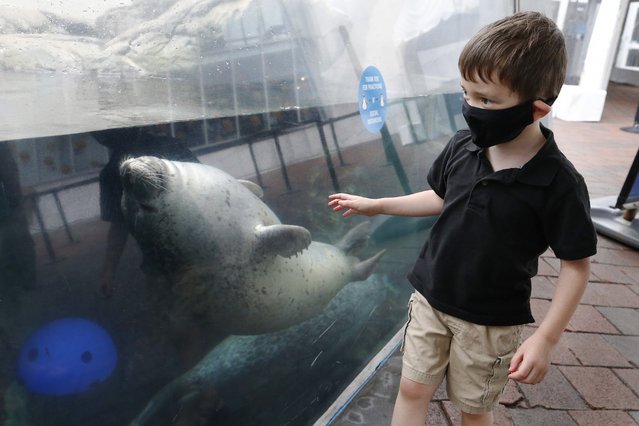 Leo Mitchell, 4, watches a seal at the New England Aquarium, Friday, July 17, 2020, in Boston. The Aquarium reopened on Thursday on a reservations only basis after being closed since March due to the coronavirus. (Photo by Michael Dwyer/AP Photo) 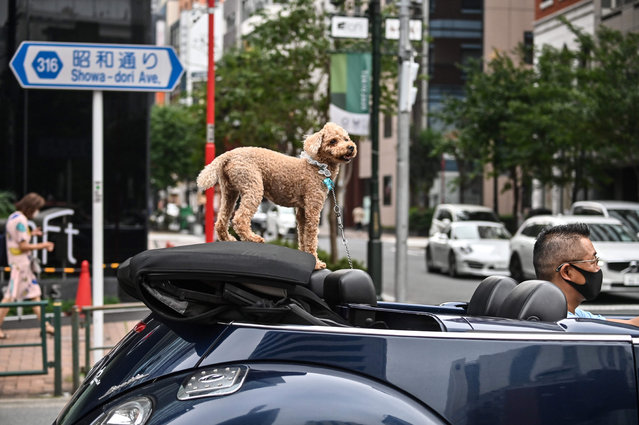 A dog looks on while riding in a convertible-top car in Tokyo on July 24, 2020. (Photo by Charly Triballeau/AFP Photo) 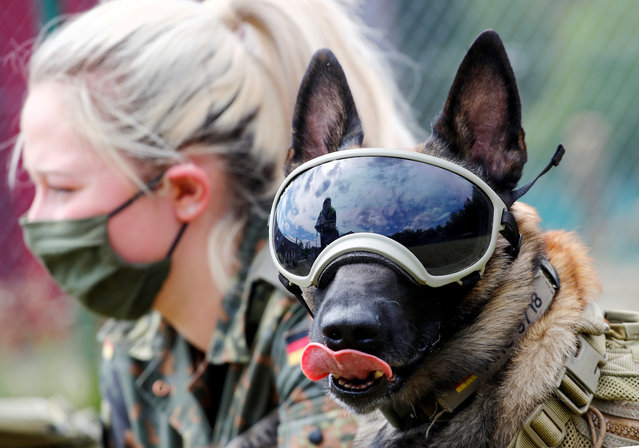 Five-year-old sniffing dog “Vine” wears protection goggles against the sun and dust as he poses together with Giulia Gausemann for photographers, at the sniffing dogs school of the German Army (Bundeswehr) in Daun, Germany, July 24, 2020. The Bundeswehr sniffing dogs school and the veterinarian university of Hanover are developing a training programme to sniff out the coronavirus disease (COVID-19) with dogs at airports, border crossings and other highly frequented places. (Photo by Wolfgang Rattay/Reuters) 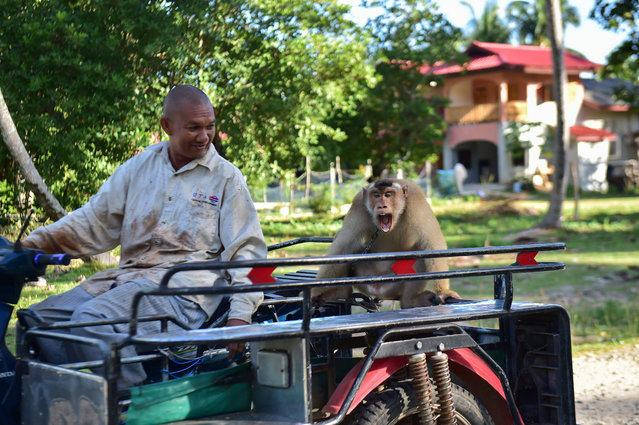 This photo taken on July 9, 2020 shows a coconut-collecting macaque monkey reacting as he is driven on the sidecar to a motorbike in Berapea village near Narathiwat in southern Thailand. Animal rights campaigner PETA released videos in early July of monkey “slaves” picking coconuts in Thailand, which has led several British retailers to ban the products. Thai coconut farmers have denied mistreating the macaques. (Photo by Madaree Tohlala/AFP Photo) 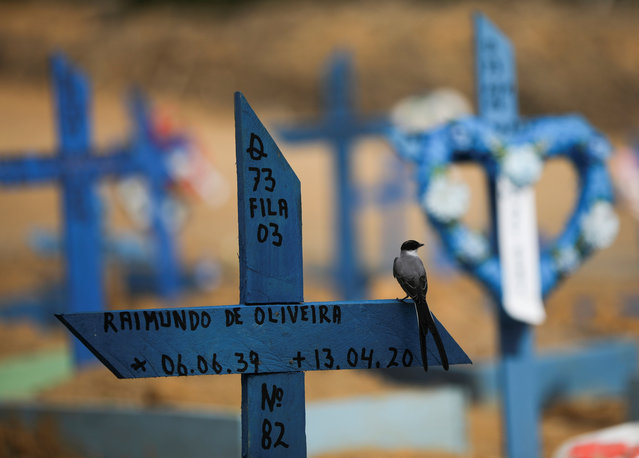 A bird on a cross is pictured, amid the coronavirus disease (COVID-19) outbreak, at the Parque Taruma cemetery in Manaus, Brazil, June 26, 2020. (Photo by Bruno Kelly/Reuters) 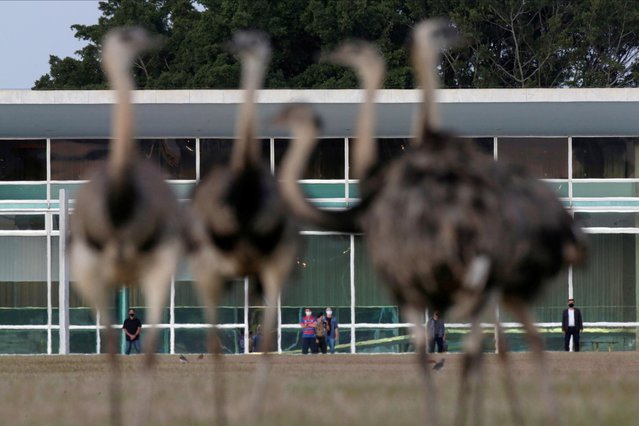 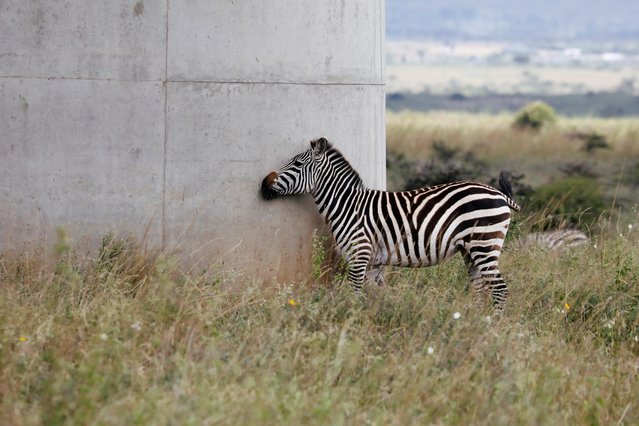 A zebra scratches itself against a pillar of a bridge of the Standard Gauge Railway (SGR) line, inside the Nairobi National Park in Nairobi, Kenya on July 9, 2020. (Photo by Baz Ratner/Reuters) 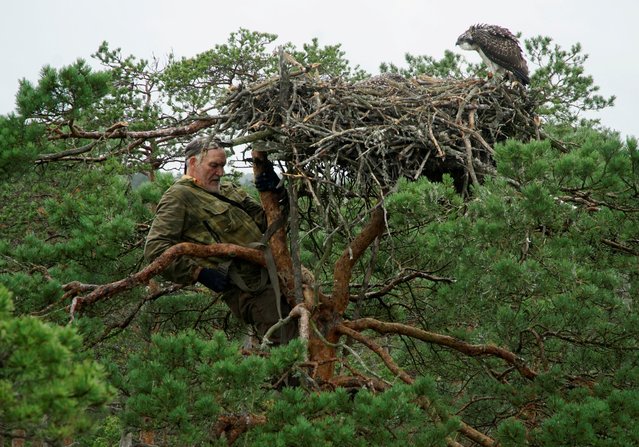 Belarusian ornithologist Vladimir Ivanovski, 73, climbs a tree with a nest of osprey chicks during the monitoring of nests of birds of prey, in a marsh at the Republican reserve “Koziansky” near the remote village of Kaziany, Belarus, July 12, 2020. (Photo by Vasily Fedosenko/Reuters) 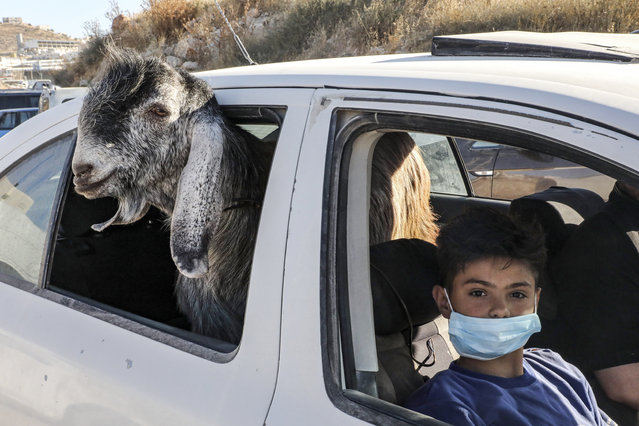 A boy, clad in mask due to the COVID-19 coronavirus pandemic, rides in a car with a goat just purchased at a Friday animal market in the city of Hebron in the occupied West Bank on July 24, 2020, as Muslims prepare for the Eid al-Adha holiday to take place the following week. Known as the “big” festival, Eid al-Adha is celebrated each year by Muslims sacrificing various animals according to religious traditions, including cows, camels, goats and sheep. The festival marks the end of the Hajj pilgrimage to Mecca and commemorates Prophet Abraham's readiness to sacrifice his son to show obedience to God. (Photo by Hazem Bader/AFP Photo) 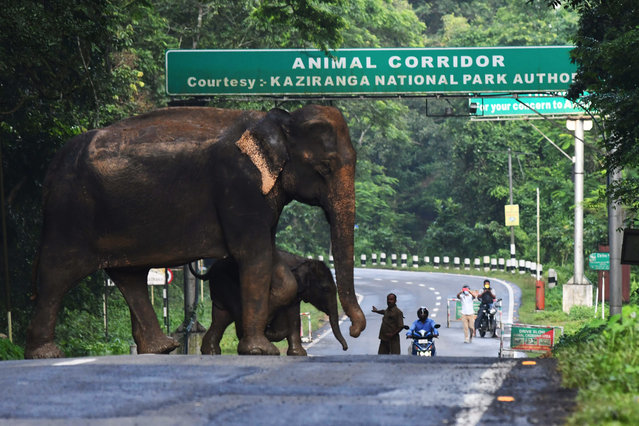 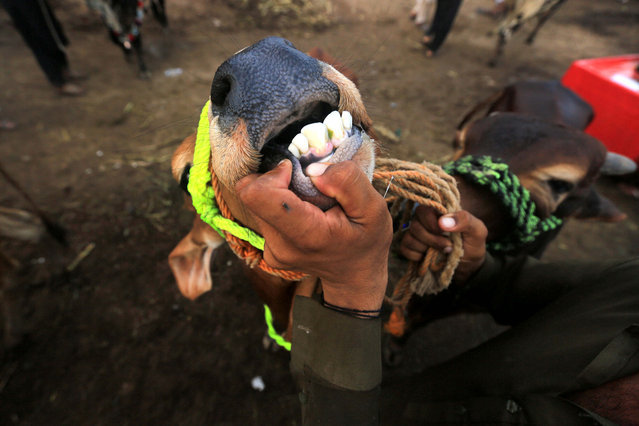 A man checks the teeth of a sacrificial animal to determines its age, at a market ahead of Eid al-Adha festival in Peshawar, Pakistan, 09 July 2020. Eid al-Adha is the holiest of the two Muslims holidays celebrated each year, it marks the yearly Muslim pilgrimage (Hajj) to visit Mecca, the holiest place in Islam. Muslims slaughter a sacrificial animal and split the meat into three parts, one for the family, one for friends and relatives, and one for the poor and needy. (Photo by Arshad Arbab/EPA/EFE)
Edit Del
26 Jul 2020 00:01:00, post received 0 comments
Publication archive:
←   →
Popular tags:
All tags
Last searches: