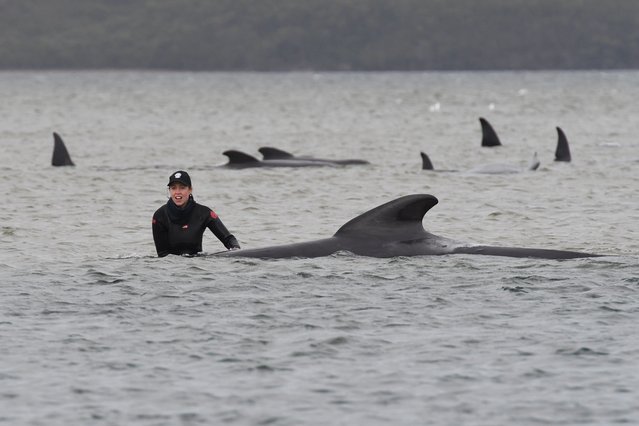 A person stands next to a stranded pilot whale at Macquarie Harbour, Tasmania, Australia, 22 September 2020. A large rescue mission to save approximately 270 pilot whales has begun. According to reports 90 whales have perished. (Photo by Brodie Weeding/EPA/EFE) 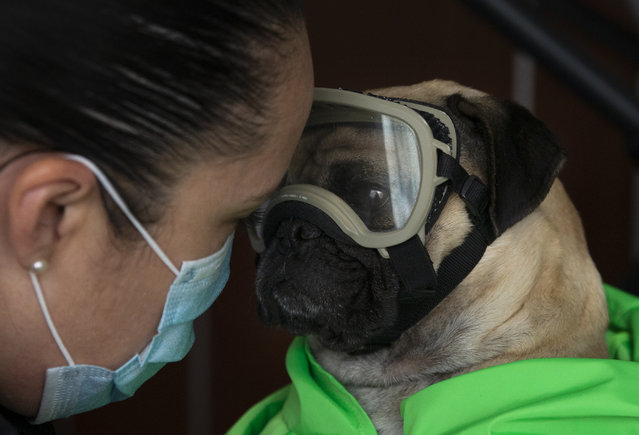 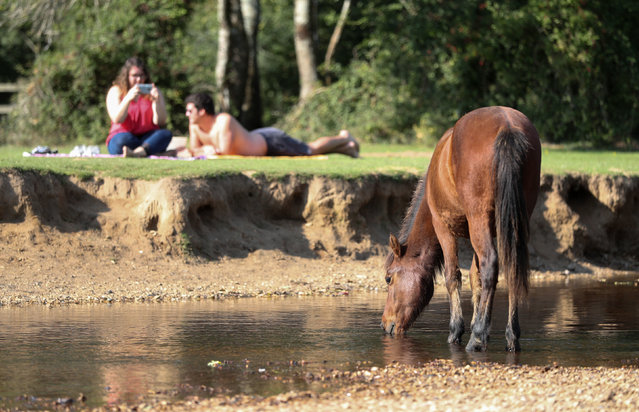 A New Forest pony cools off in the Lymington river near to Brockenhurt, England on September 14 2020. (Photo by Andrew Matthews/PA Images via Getty Images) 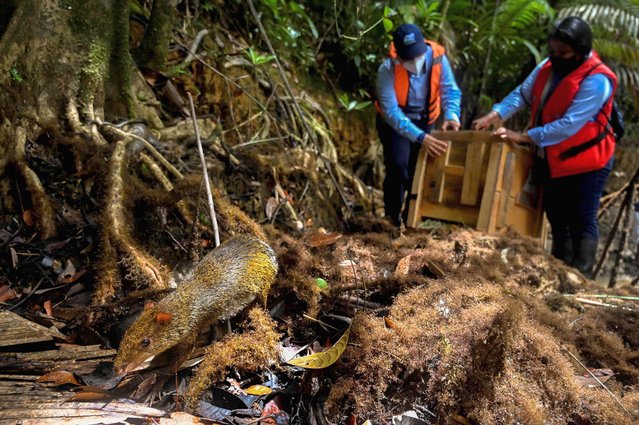 Biologists of the regional environmental entity CVC, release two Central American agoutis (Dasyprocta punctata) in a rural area of Buenaventura, Colombia, on September 11, 2020, during the National Biodiversity Day in Colombia. Environmental authorities in Colombia released about 1800 animals of different species in different areas of the country, who were recovered of illegal wildlife trafficking. (Photo by Luis Robayo/AFP Photo) 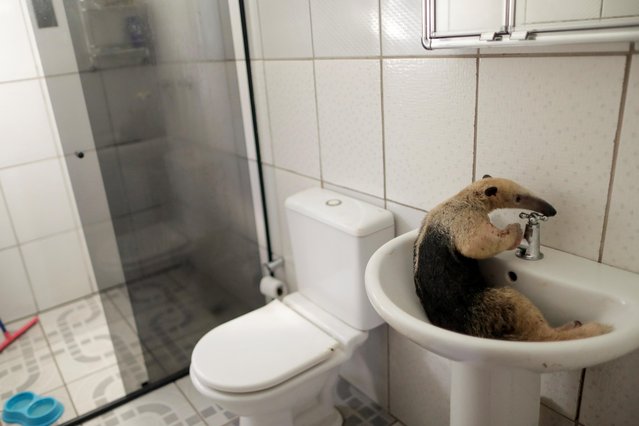 An anteater rests in a bathroom sink while receiving treatment at veterinarian of the state environmental police Marcelo Andreani's house, near Porto Velho, Rondonia State, Brazil, August 19, 2020. The anteater arrived with a broken left paw after a clash with a fierce porcupine. The patient had been found hiding in a garage and, again, the vets think it might have been fleeing fires as anteaters rarely turn up in the city. The fracture required surgery. Under anaesthetic, a giant tongue rolled out of the anteater's mouth, earning it the affectionate nickname Linguaruda, or Long-tongue. After surgery, one of the vets took Linguaruda home to keep a closer eye on her recovery. At one point, she climbed into the bathroom sink to rest. In five days, Linguaruda was strong enough to return to the wild – the best outcome her rescuers could wish for. (Photo by Ueslei Marcelino/Reuters) 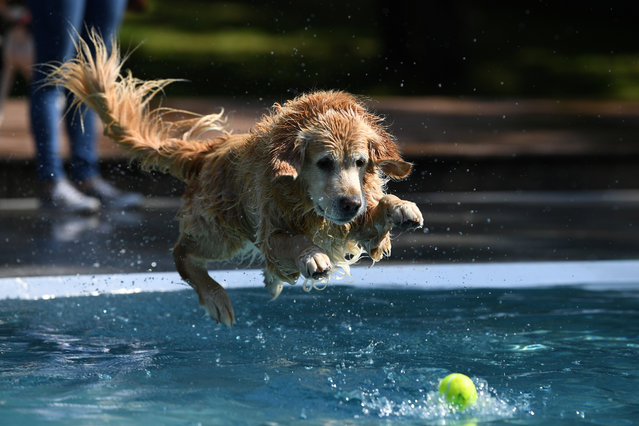 A dog jumps into the water after a ball during a dog swim day at an open-air pool in Munich, Germany, September 11, 2020. (Photo by Andreas Gebert/Reuters) 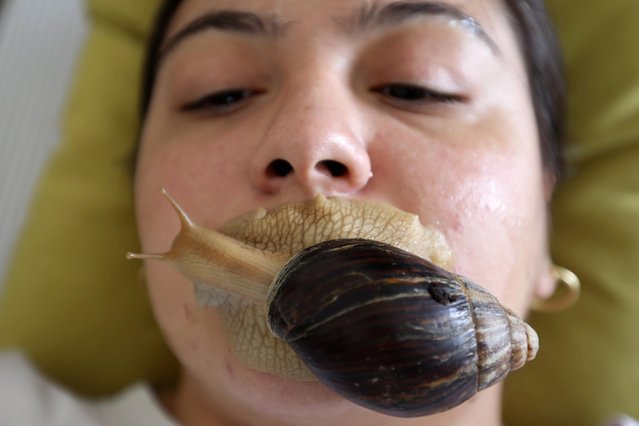 Alia Fares, 27, undergoes facial massage with Giant African land snails, which some claim boost collagen in the skin, at a centre in Amman, Jordan on September 16, 2020. (Photo by Muhammad Hamed/Reuters) 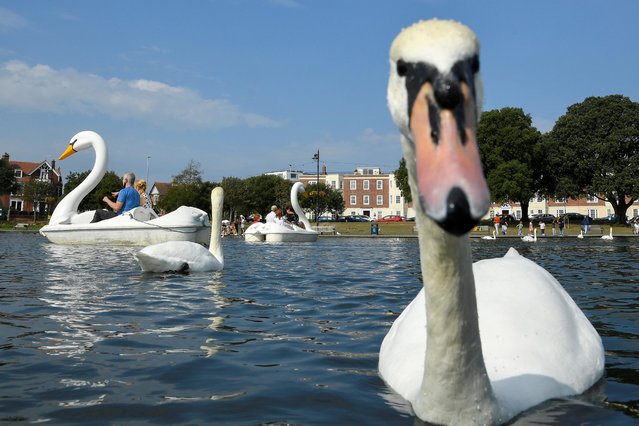 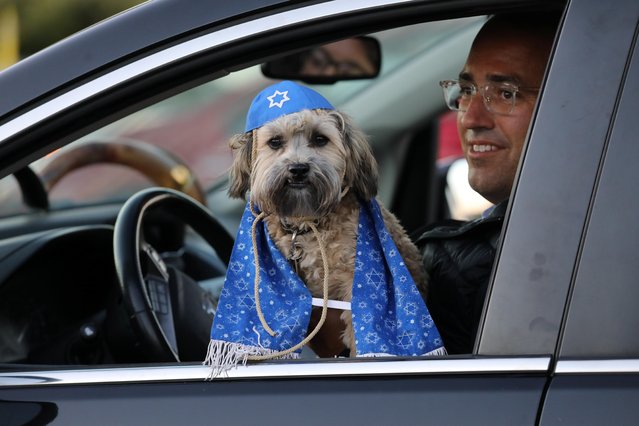 Rocky Kel Lev, a 7-month old havanese dog, is seen in a vehicle during a drive-in service dubbed the “Shofarpalooza” marking Rosh Hashanah in Toronto, Ontario, Canada on September 20, 2020. (Photo by Chris Helgren/Reuters) 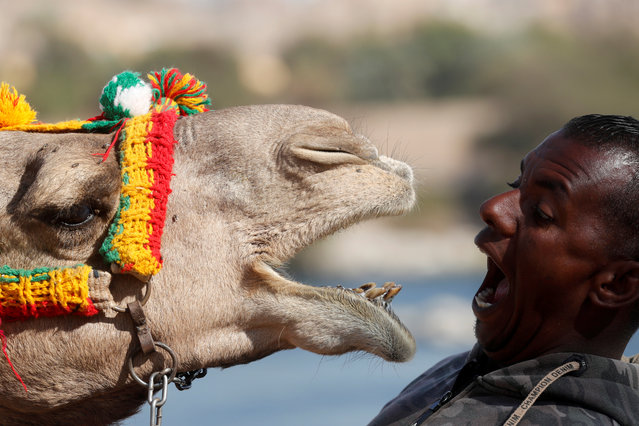 Hossam Nasser, 32, plays with his camel ”Anter” in front of his house in the Nubian village of Gharb Soheil, on the west bank of the Nile river in Aswan, Egypt on February 19, 2020. (Photo by Amr Abdallah Dalsh/Reuters) 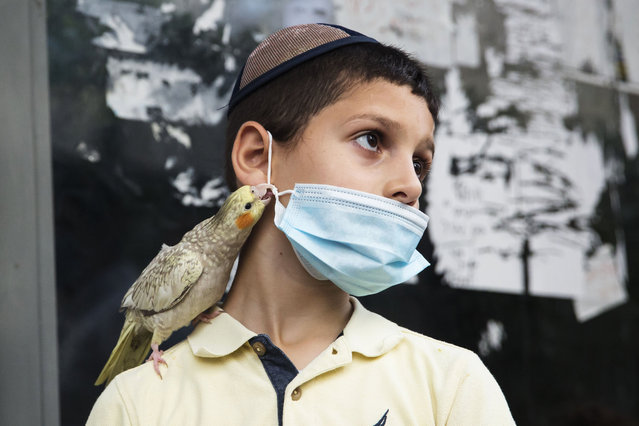 Shmuel Ben Sason wears a protective face mask as his parrot Shuki sits on his shoulder on September 17, 2020 in Bnei Brak, Israel. As the country grapples with a surge in Covid-19 cases it has imposed a three-week lockdown that coincides with Rosh Hashanah, the Jewish new year, and Yom Kippur, the Day of Atonement. (Photo by Amir Levy/Getty Images) 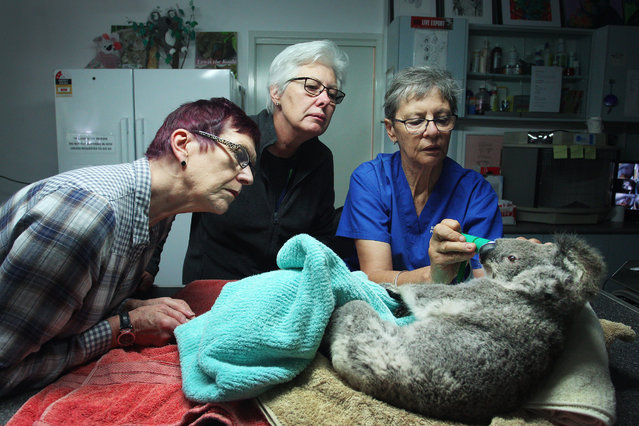 Clinical Director Cheyne Flanagan (R) and hospital volunteers Rita Saunders and Gaby Rivett and treat a juvenile female koala named “Oxey Kylie” for car accident trauma at Port Macquarie Koala Hospital on September 15, 2020, in Port Macquarie, Australia. Established in 1973 the Port Macquarie Koala Hospital has 150 volunteers, a specialised treatment room, intensive care unit and rehabilitation yards. The team were instrumental in treating bushfire affected koalas during what has become known as Australia's Black Summer. A New South Wales parliamentary inquiry released in June 2020 has found that koalas will become extinct in the state before 2050 without urgent government intervention. Making 42 recommendations, the inquiry found that climate change is compounding the severity and impact of other threats, such as drought and bushfire, which is drastically impacting koala populations by affecting the quality of their food and habitat. The plight of the koala received global attention in the wake of Australia's devastating bushfire season which saw tens of thousands of animals killed around the country. While recent fires compounded the koala's loss of habitat, the future of the species in NSW is also threatened by continued logging, mining, land clearing, and urban development. Along with advising agencies work together to create a standard method for surveying koala populations, the inquiry also recommended setting aside protected habitat, the ruling out of further opening up of old-growth state forest for logging and the establishment of a well-resourced network of wildlife hospitals in key areas of the state staffed by suitably qualified personnel and veterinarians. The NSW Government has committed to a $44.7 million koala strategy, the largest financial commitment to protecting koalas in the state's history. (Photo by Lisa Maree Williams/Getty Images) 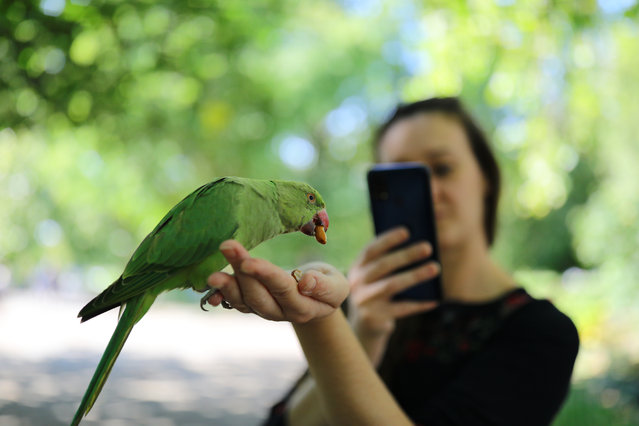 A young woman takes a picture whilst feeding a parakeet from her hand as she enjoys the autumn sunshine in St James's Park London on September 14, 2020, at the start of a week in which the UK is expected to bask in temperatures of more than 30C. (Photo by Aaron Chown/PA Images via Getty Images) 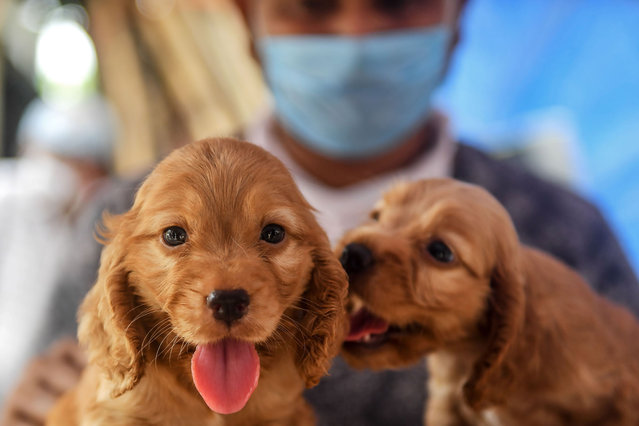 Puppies react near the vendor waiting for customers at the weekly pet market on Galiff Street as it reopened in Kolkata on September 6, 2020. (Photo by Dibyangshu Sarkar/AFP Photo) 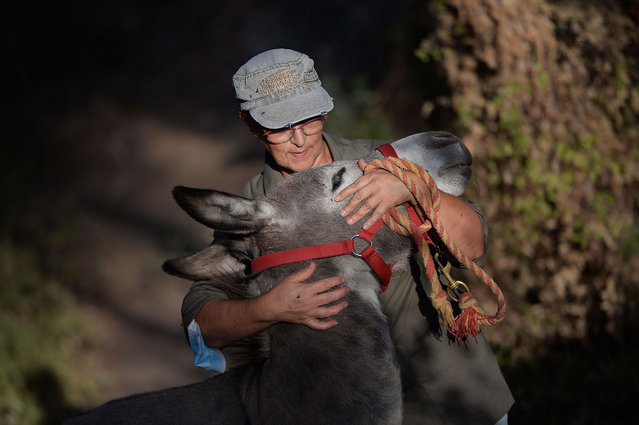 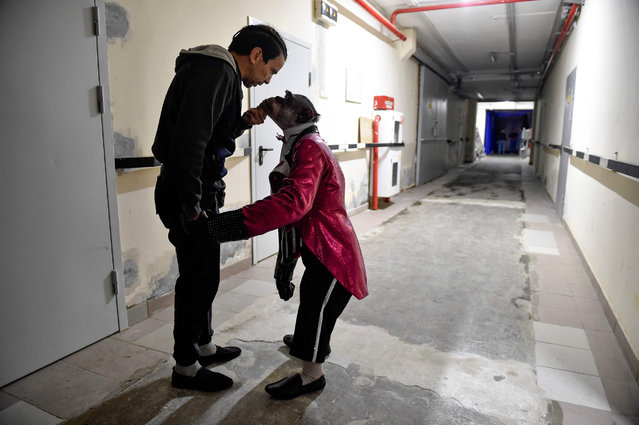 Murad Khydyrov, horse and monkey trainer at the Great Moscow State Circus, and chimpanzee named Micky get ready for a rehearsal of the show called “History” as the circus prepares for its new season, which is to begin on September 19, in Moscow on September 17, 2020. (Photo by Natalia Kolesnikova/AFP Photo)
Edit Del
27 Sep 2020 00:01:00, post received 0 comments
Publication archive:
←   →
Popular tags:
All tags
Last searches: