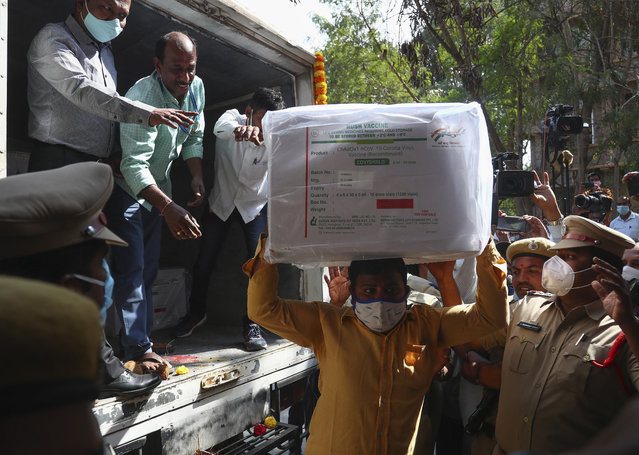 In this January 12, 2021, file photo, health workers shift a box containing COVID-19 vaccine from a vehicle to a cold storage at Commissionerate of Health and Family Welfare in Hyderabad, India. The global death toll from COVID-19 has topped 2 million. (Photo by Mahesh Kumar A./AP Photo/File) 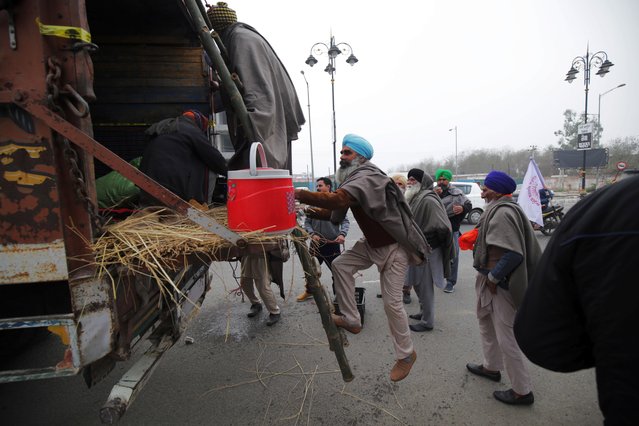 Farmers board a tractor trolley as they begin their march towards New Delhi to join farmers taking part in sit-in protest against the new agriculture laws and demanding to repeal the laws at New Delhi borders, in Amritsar, India, 12 January 2021. Farmers' organizations have proposed to take out a “parallel parade” on the day of India's Republic Day and its parade to be held at New Delhi, on 26 January 2021. Scores of tractor trolleys are expected to move towards Delhi between 12-15 January from Punjab and Haryana in preparations for the “parallel parade”. However, the Supreme Court on 12 January has put a hold on the new controversial agriculture laws and has formed a four-member panel to hold talks with the farmers on the issue. (Photo by Raminder Pal Singh/EPA/EFE) 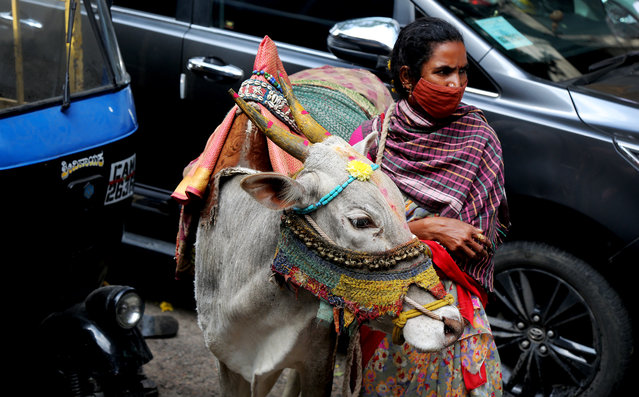 An Indian woman stands next to a decorated bull as part of the Thai Pongal festival, locally known as Makar Sankranti, in Bangalore, India, 14 January 2021. Pongal, very popular in South Indian states, is a famous dish made of rice boiled in milk with jaggery (cane sugar) and other sweeteners. Cows and bulls are traditionally decorated with bright colors during celebrations. Offerings are made to thank the Sun and the weather for helping obtain a bountiful harvest. (Photo by Jagadeesh N.V./EPA/EFE) 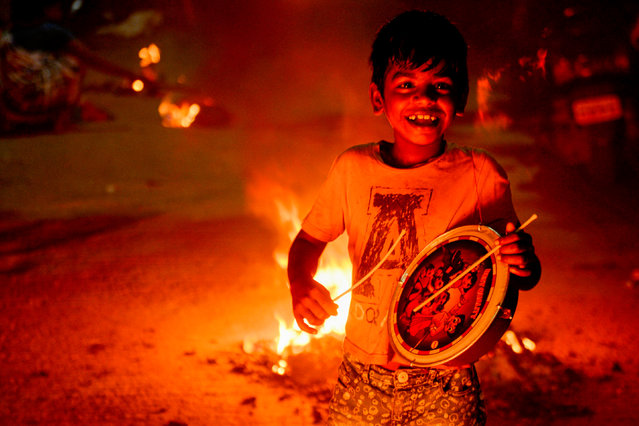 A boy plays the drum beside bonfires to celebrate Hindu harvest festival of Ponga in Chennai on January 13, 2021. (Photo by Arun Sankar/AFP Photo) 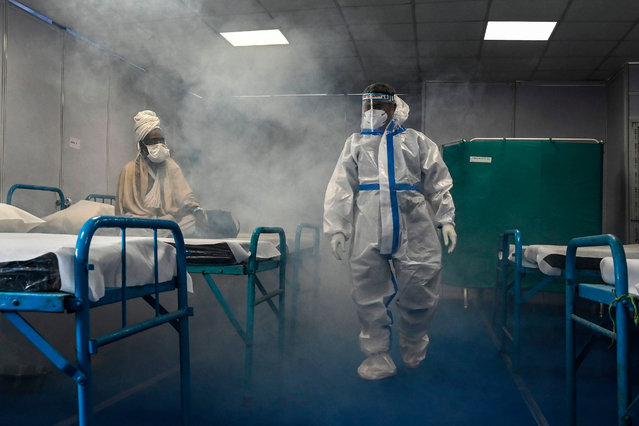 A health staff (R) wearing a protective suit is seen after conducting a Rapid Antigen Covid-19 coronavirus test on a Sadhu (Hindu holy man) at a temporary isolation ward of the Sagar Hospital, during the religious festival of Makar Sankranti on Sagar Island on January 13, 2021. (Photo by Dibyangshu Sarkar/AFP Photo) 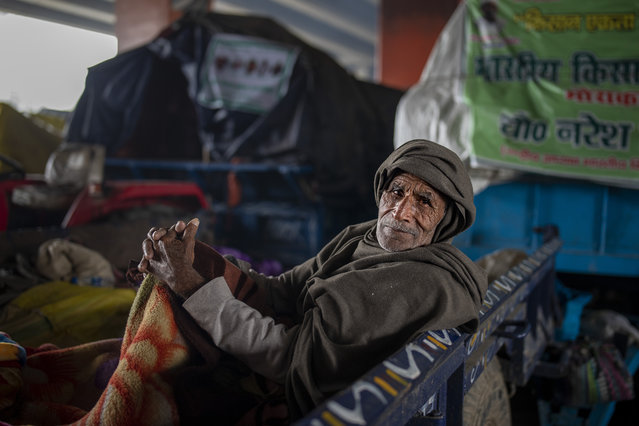 An elderly farmer sits in the back of a tractor trolly as they block a highway in protest against new farm laws at the Delhi-Uttar Pradesh state border, on the outskirts of New Delhi, India, Monday, January 11, 2021. (Photo by Altaf Qadri/AP Photo) 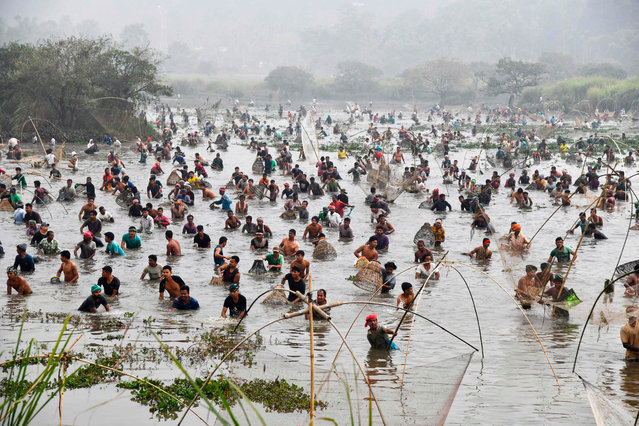 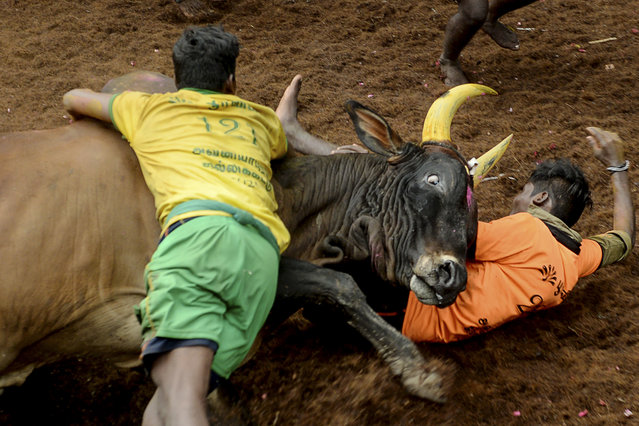 Participants try to control a bull during an annual bull taming event “Jallikattu” in the village of Avaniyapuram, on the outskirts of Madurai on January 14, 2021. (Photo by Arun Sankar/AFP Photo) 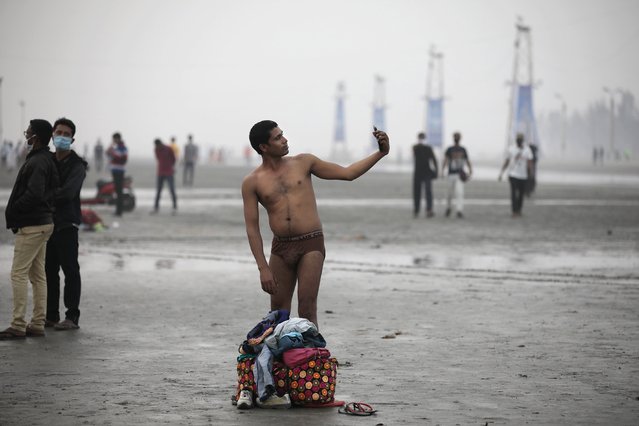 A Hindu devotee takes a selfie before a holy dip in the Ganges as Indian Hindu pilgrims gather near Bay of Bengal at Sagar Island during the first day of Ganga Sagar annual fair, 130 km south of Kolkata, Eastern India, 12 January 2021. The Ganga Sagar Fair is an annual gathering of Hindu pilgrims during Makar Sankranti at Sagar Island in West Bengal, to take a dip in sacred waters of Ganga River before it merges in the Bay of Bengal. (Photo by Piyal Adhikary/EPA/EFE) 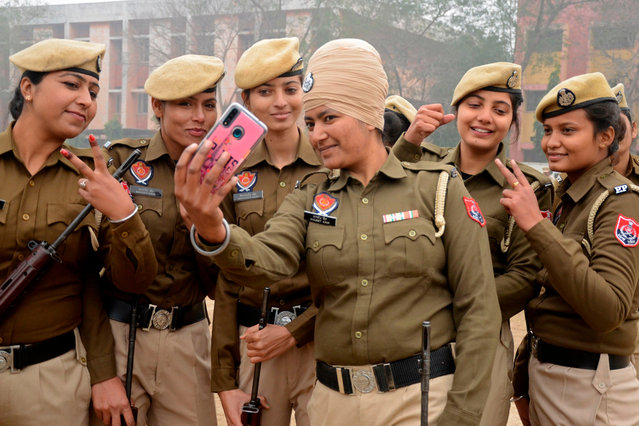 Police personnel take a selfie after taking part in a rehearsal for the upcoming Republic Day Parade in Amritsar on January 15, 2021. (Photo by Narinder Nanu/AFP Photo) 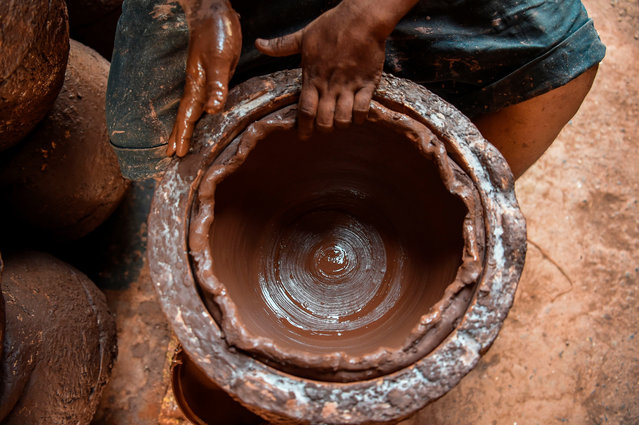 A potter works at his workshop in Dharavi slums, in Mumbai on January 13, 2021. (Photo by Punit Paranjpe/AFP Photo) 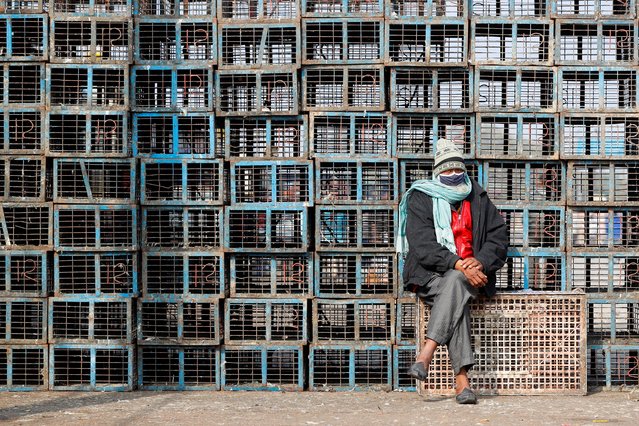 A worker sits next to empty chicken cages at a wholesale market in New Delhi, India on January 11, 2021. (Photo by Adnan Abidi/Reuters) 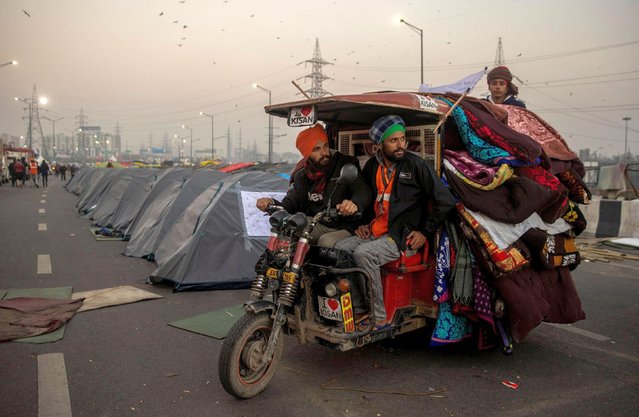 Farmers transport blankets and mattresses at the site of a protest against new farm laws, at the Delhi-Uttar Pradesh border in Ghaziabad, India, January 11, 2021. (Photo by Danish Siddiqui/Reuters) 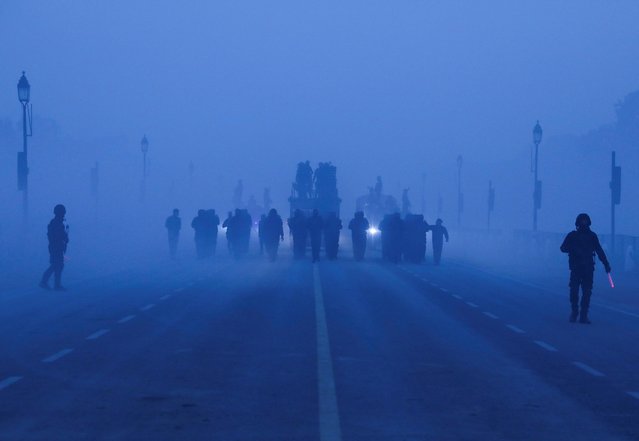 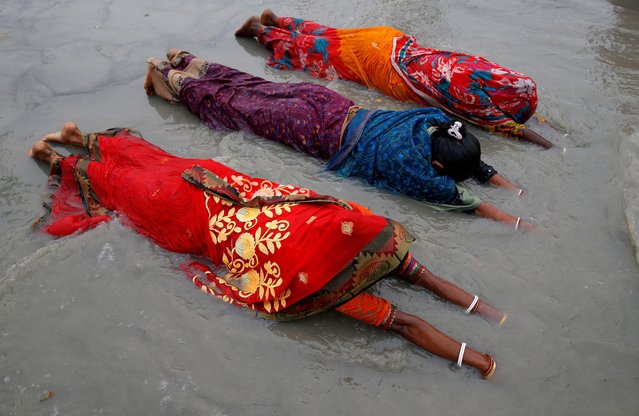 Women worship to Hindu sun god as they take a dip at the confluence of the river Ganges and the Bay of Bengal on the occasion of “Makar Sankranti” festival at the Sagar Island, amidst the spread of the coronavirus disease (COVID-19), in the eastern state of West Bengal, India, January 14, 2021. (Photo by Rupak De Chowdhuri/Reuters) 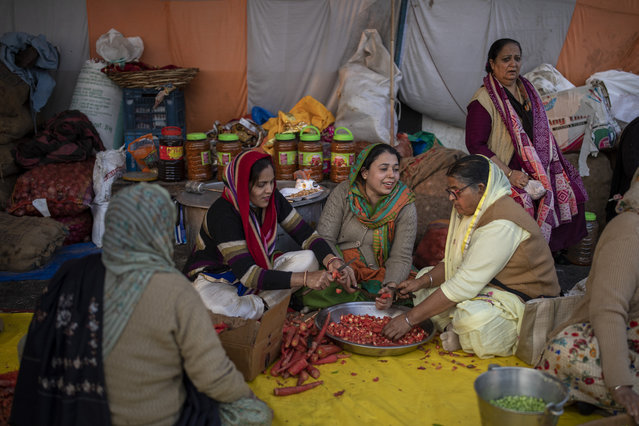 Family members of farmers prepare food for fellow farmers as they block a highway in protest against new farm laws at the Delhi-Uttar Pradesh state border, on the outskirts of New Delhi, India, Monday, January 11, 2021. (Photo by Altaf Qadri/AP Photo) 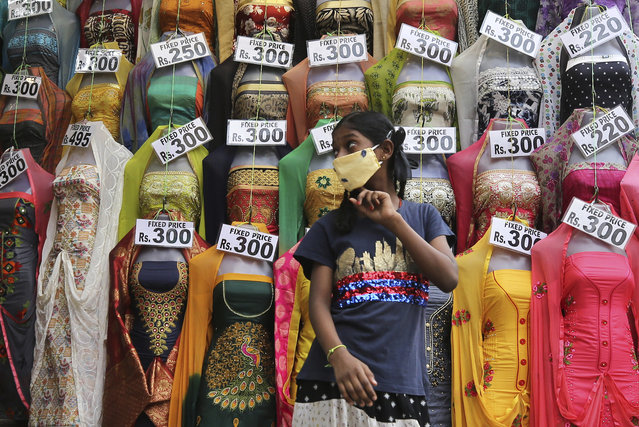 A girl wearing a face mask as a precaution against the coronavirus walks past a display of garments at a market in Bengaluru, India, Saturday, January 9, 2021. India will kick off the coronavirus vaccination drive on Jan. 16 to stem the pandemic in the world's second-most populous country. A Health Ministry statement says that priority will be given to the healthcare workers and the frontline workers, estimated around 30 million. (Photo by Aijaz Rahi/AP Photo) 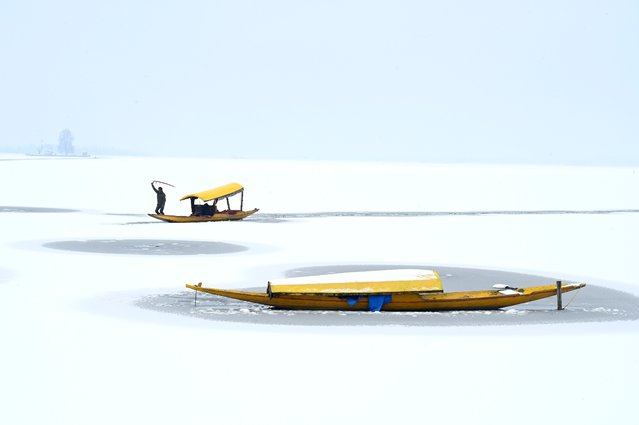 A boatman steers his boat at the partially frozen Dal Lake after a snowfall in Srinagar on January 9, 2021. (Photo by Tauseef Mustafa/AFP Photo) 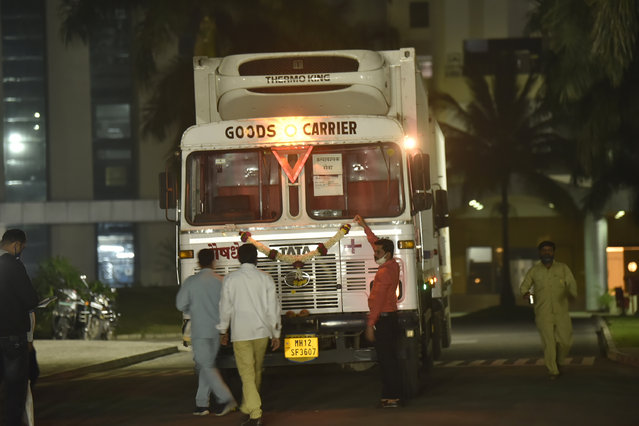 A man hangs a floral garland on a container truck, one of three carrying the first consignment of vaccines, before it leaves for the airport at Serum Institute of India, the world's largest vaccine maker, in Pune, India, Tuesday, January 12, 2021. On Jan. 16 India will start the massive undertaking of inoculating an estimated 30 million doctors, nurses and other front line workers, before attention turns to around 270 million people who are either aged over 50 or have co-morbidities. (Photo by AP Photo/Stringer) 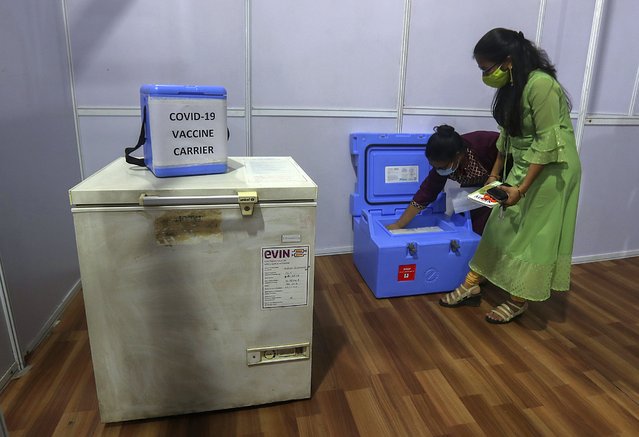 In this Thursday, January 7, 2021, file photo, health workers prepare for a trial run of COVID-19 vaccine, before preparing to roll-out an inoculation program to stem the coronavirus pandemic, in Mumbai, India.India took a regulatory shortcut for their homegrown vaccine, a move touted by Prime Minister Narendra Modi as a success in India’s self-reliance. But several groups and unions representing scientists and doctors have expressed their concerns over scant evidence of effectiveness for the vaccine by Indian drugmaker Bharat Biotech. Many scientists have said that approving a vaccine without evidence from late trials is risky and a lack of transparency in the approval process could increase vaccine hesitancy in the world’s second-most populated country, where more than 10.4 million coronavirus cases have been reported among the nearly 1.4 billion people. (Photo by Rafiq Maqbool/AP Photo/File) 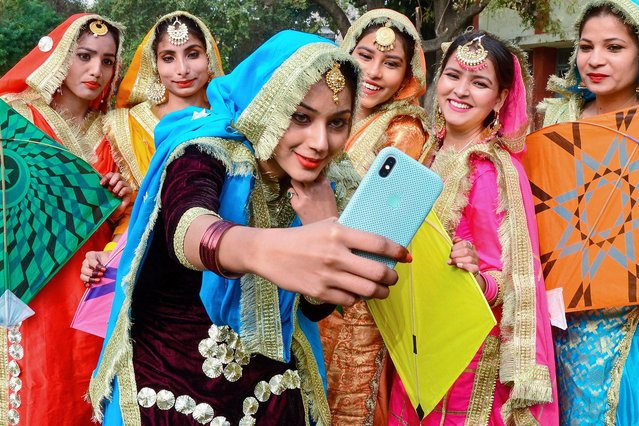