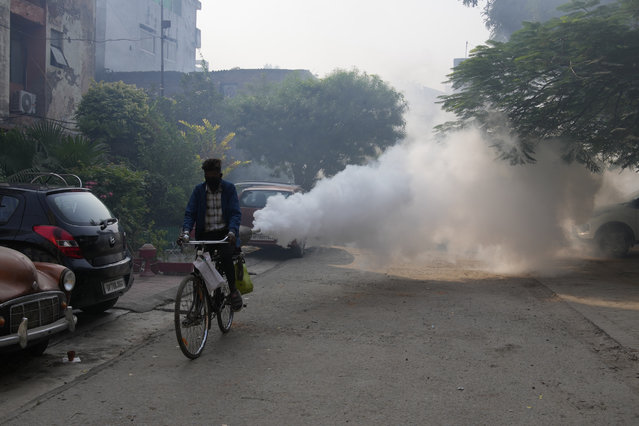 A municipal worker fumigates an area to prevent the spread of mosquito-borne diseases in Prayagraj, in the northern state of Uttar Pradesh, India, Thursday, November 17, 2022. (Photo by Rajesh Kumar Singh/AP Photo) 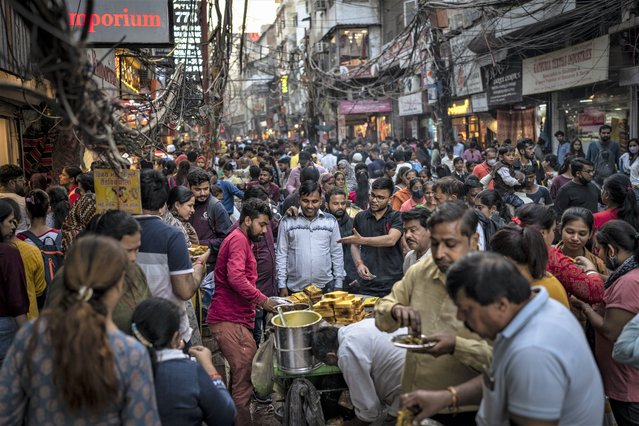 People eat street food as shoppers crowd a market in New Delhi, India, Saturday, November 12, 2022. The world's population is projected to hit an estimated 8 billion people on Tuesday, Nov. 15, according to a United Nations projection. (Photo by Altaf Qadri/AP Photo) 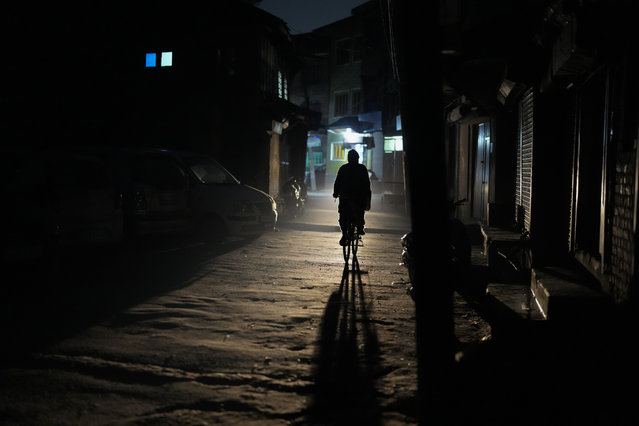 A Kashmiri man rides on a bicycle during a power outage in Srinagar, Indian controlled Kashmir, Thursday, November 17, 2022. Power outages are very frequent in the Kashmir region during winter months. (Photo by Mukhtar Khan/AP Photo) 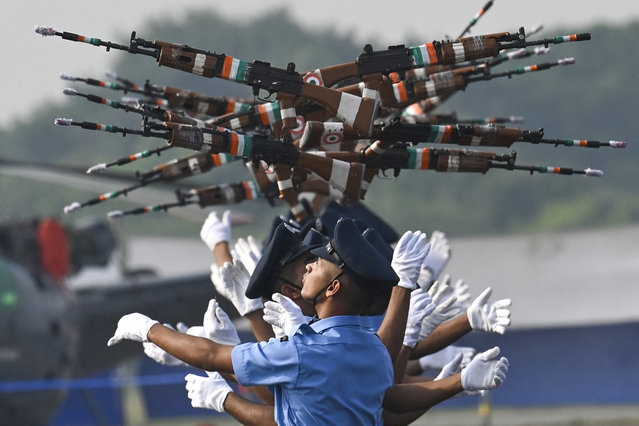 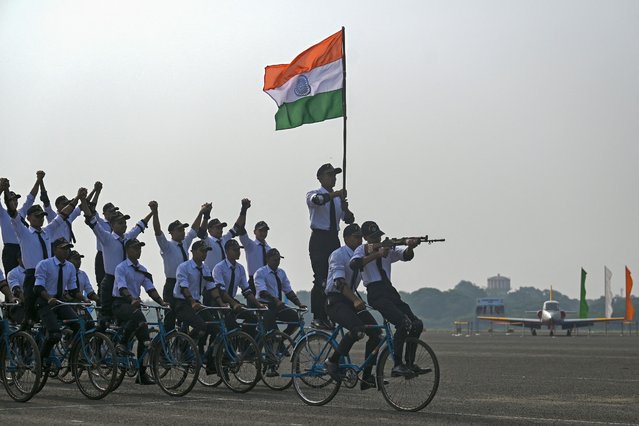 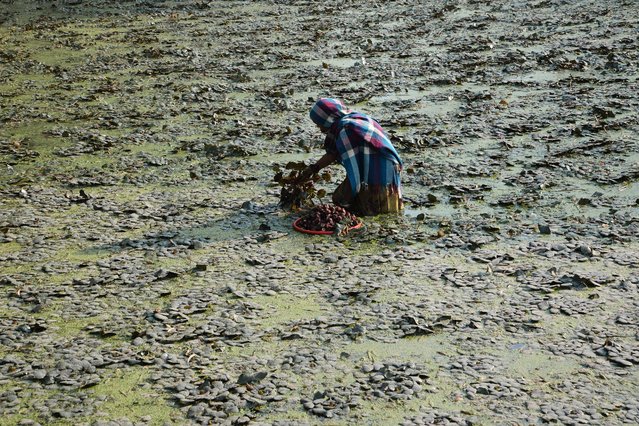 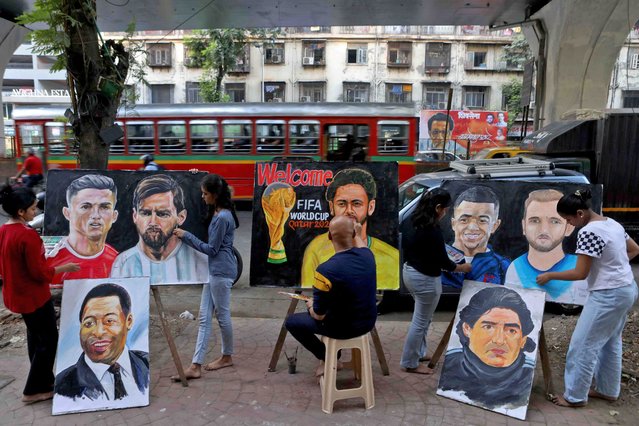 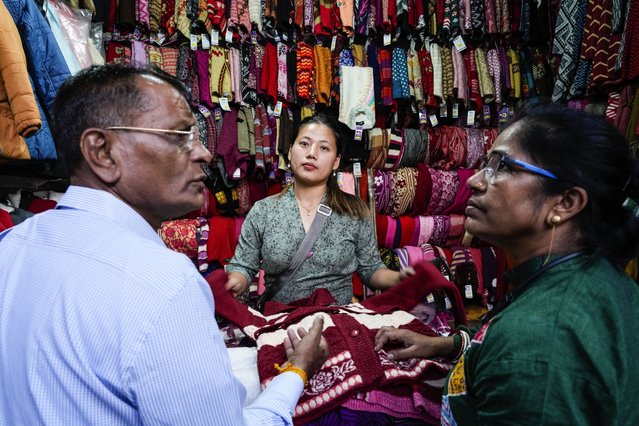 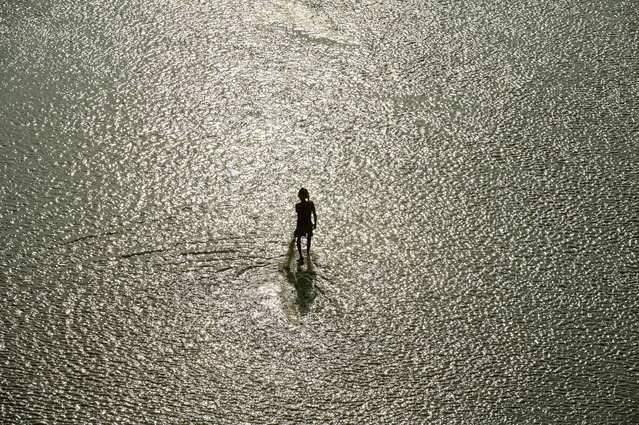 A man with a nets to catch fish walks in a shallow section of the Ganges River in Prayagraj on November 18, 2022. (Photo by Sanjay Kanojia/AFP Photo) 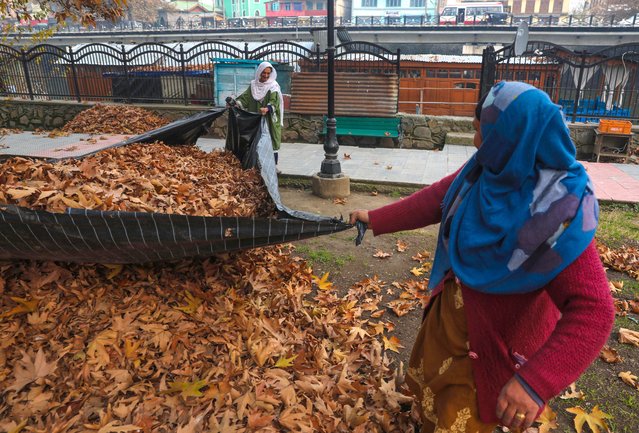 Women pull a sheet filled with dried leaves to burn them for preparing coal on a cold day in Srinagar, the summer capital of Indian Kashmir, 19 November 2022. Indian Kashmir is witnessing a decrease in night temperatures. (Photo by Farooq Khan/EPA/EFE) 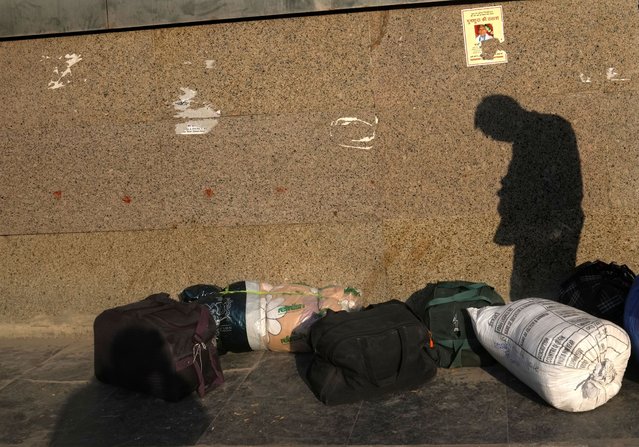 The shadow of a migrant worker from another state is cast over his belongings as he waits for transportation, Monday, November 21, 2022, in New Delhi. (Photo by Manish Swarup/AP Photo) 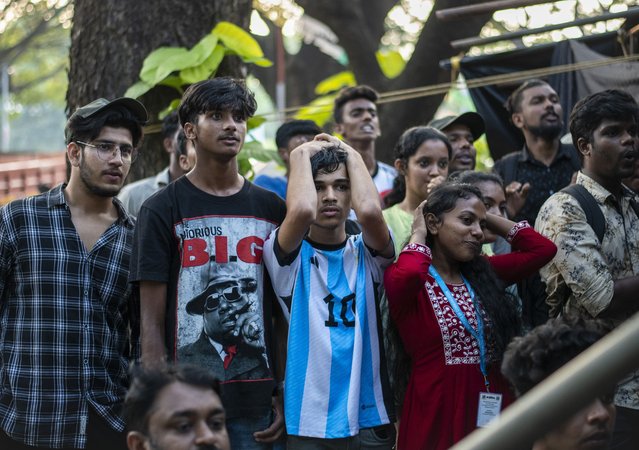 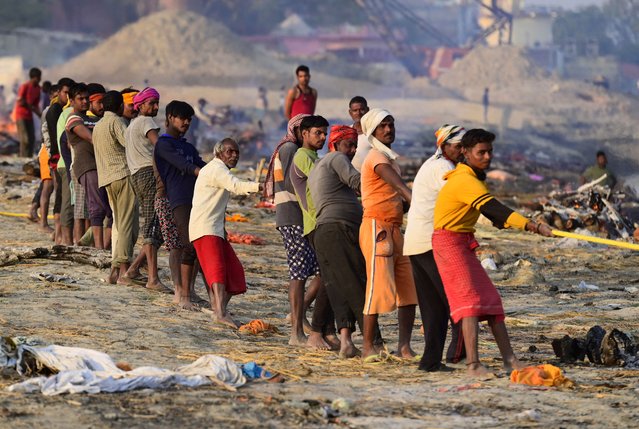 Labourers pull a rope attached to a pontoon buoy on the banks of the Ganges River to build a floating pontoon bridge during preparations for the upcoming annual Hindu religious fair of Magh Mela in Prayagraj on November 22, 2022. (Photo by Sanjay Kanojia/AFP Photo) 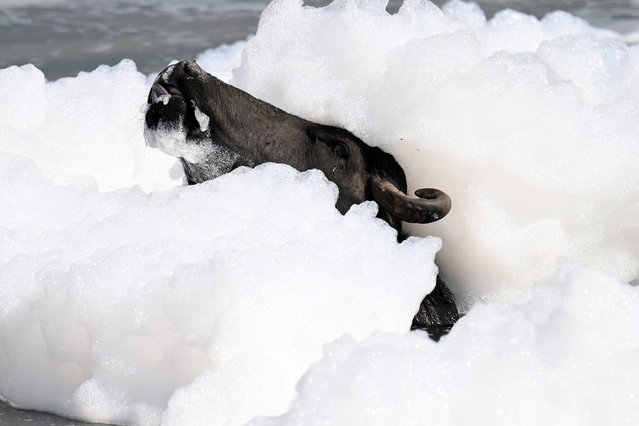 A water buffalo wades in the polluted Yamuna River in New Delhi on November 24, 2022. (Photo by Money Sharma/AFP Photo) 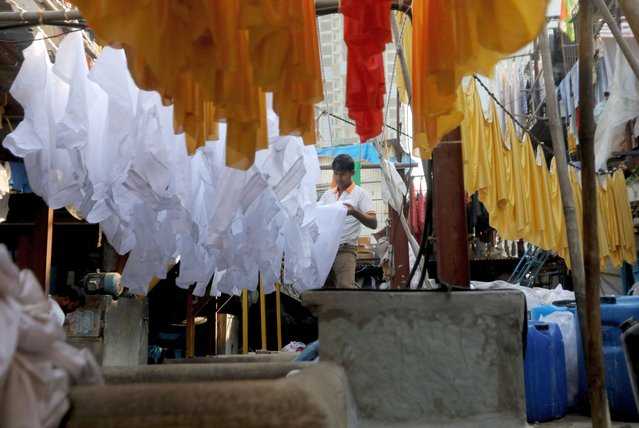 A laundryman retrieves clothes hung out to dry at the Dhobi Ghat open air laundry in Mumbai, India on November 24, 2022. (Photo by Niharika Kulkarni/Reuters) 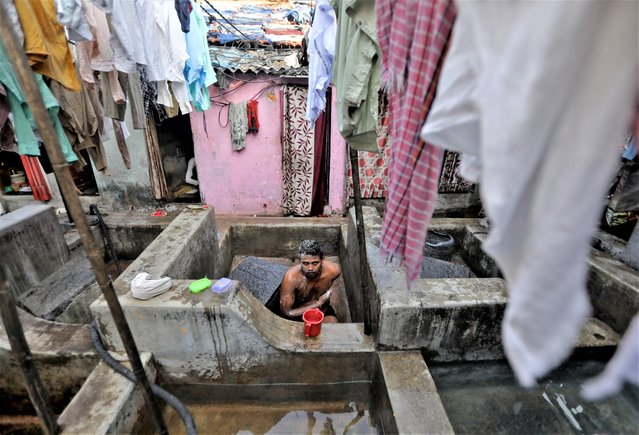 A laundryman bathes in a concrete wash pen at the Dhobi Ghat open air laundry in Mumbai, India on November 24, 2022. (Photo by Niharika Kulkarni/Reuters) 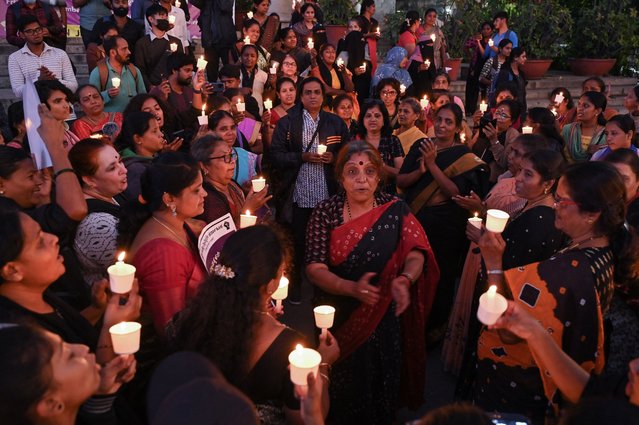 Activists light candles during a demonstration by pro womens' rights organisations on the occasion of “International Day for the Elimination of Violence Against Women”, in Bengaluru on November 25, 2022. (Photo by Manjunath Kiran/AFP Photo) 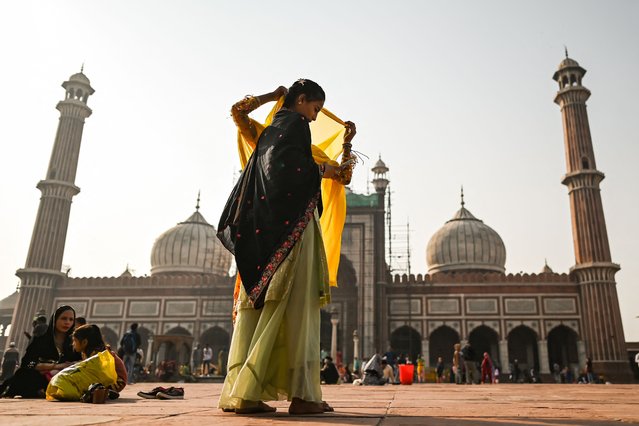 People and devotees visit the Jama Masjid mosque in the walled city area of New Delhi on November 26, 2022, after reports stating that Delhi's Jama Masjid management, rolled back a ban on entry of women without families. (Photo by Sajjad Hussain/AFP Photo) 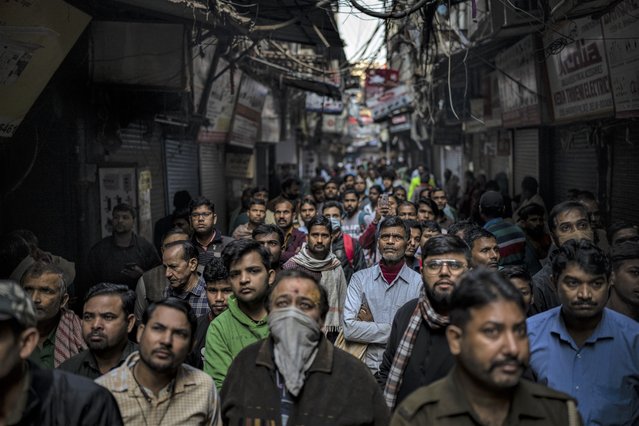 People watch from an alleyway as firefighters try to douse a fire that broke out at the congested Bhagirath Palace, a market for electrical goods, in New Delhi, India, Friday, November 25, 2022. No deaths or injuries were reported so far. (Photo by Altaf Qadri/AP Photo) 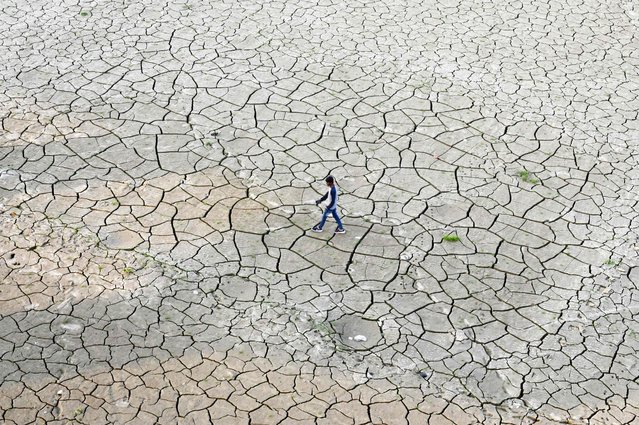