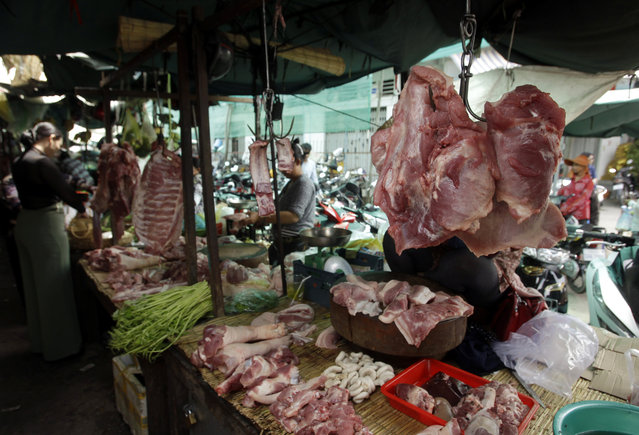 In this Thursday, May 16, 2019, photo, pork hangs for sale at the Phsar Kandal market in Phnom Penh, Cambodia. Pork lovers worldwide are wincing at prices that have jumped by up to 40 percent as China’s struggle to stamp out African swine fever in its vast pig herds sends shockwaves through global meat markets. Potential shortages are a more serious concern in places such as Cambodia where pork is the only meat many families can afford. (Photo by Heng Sinith/AP Photo) 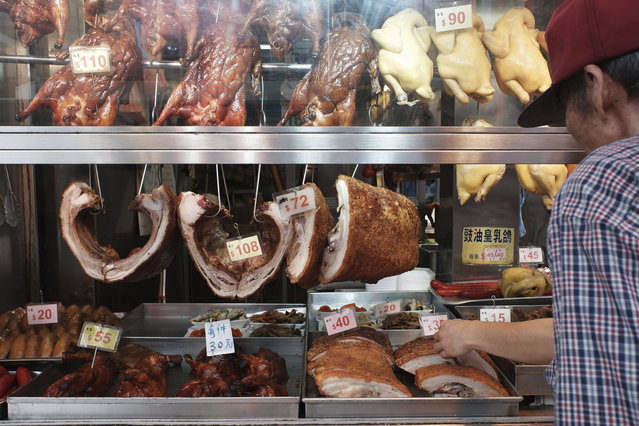 In this Thursday, May 16, 2019, photo, roast pork and poultry meat are displayed for sell at a local market in Hong Kong. A case of African swine fever has been detected in a Hong Kong slaughterhouse, prompting the culling of all 6,000 pigs at the facility. Secretary for Food and Health Sophia Chan said in a statement Friday that the incurable virus was found in a single pig imported from a farm in Guangdong province in mainland China, where the monthslong outbreak has devastated herds. (Photo by Kin Cheung/AP Photo) 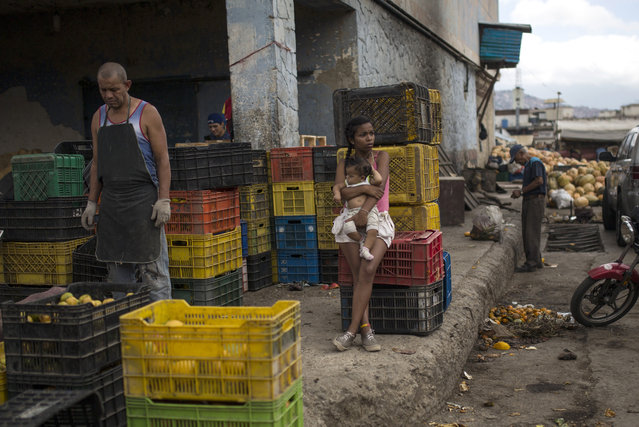 Vendors wait for customers in the Coche Market in Caracas, Venezuela, Thursday, May 2, 2019. Caracas’ biggest open-air market is tucked below a hillside barrio in one corner of the capital. (Photo by Rodrigo Abd/AP Photo) 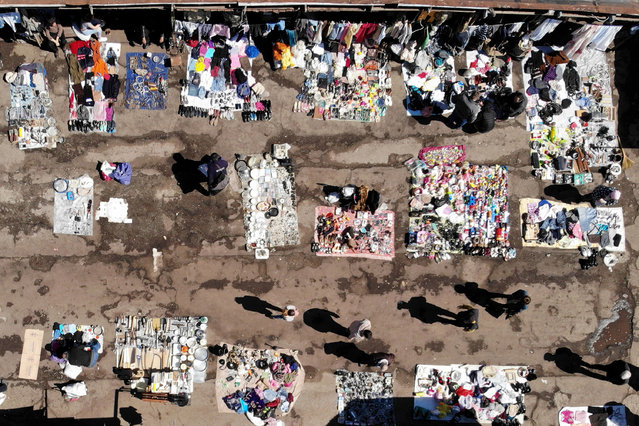 An aerial view shows a flea market in Tbilisi on April 7, 2019. (Photo by Vano Shlamov/AFP Photo) 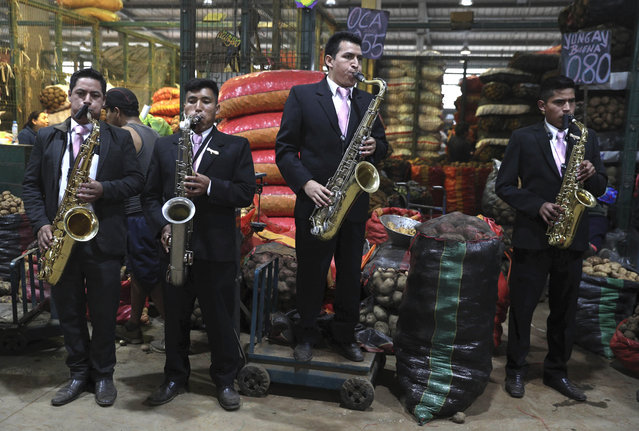 A group of contract musicians serenade potato vendors at a produce market on the outskirts of Lima, Peru, Thursday, May 30, 2019, marking International Day of the Potato. Peru is the country where the tuber was first discovered over 7,000 years ago. (Photo by Martin Mejia/AP Photo) 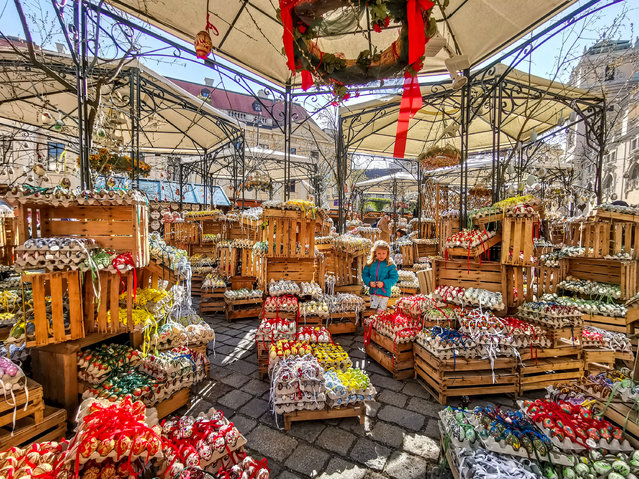 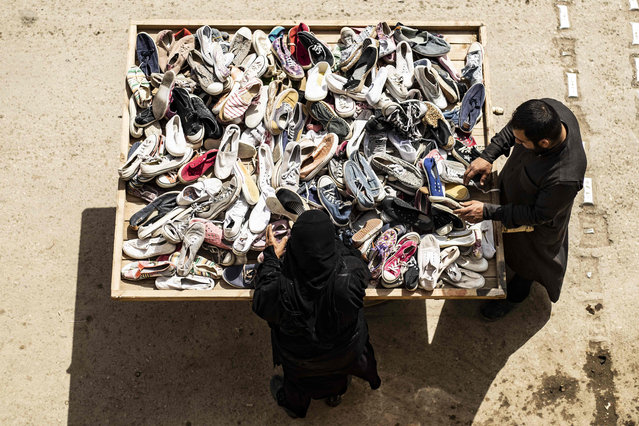 A customer buys shoes from a street vendor in the northern Syrian city of Raqa, the former Syrian capital of the Islamic State (IS) group, on April 14, 2019. The Kurdish-led Syrian Democratic Forces overran Raqa in 2017, after years of what residents described as IS's brutal rule, which included public beheading and crucifixions. (Photo by Delil Souleiman/AFP Photo) 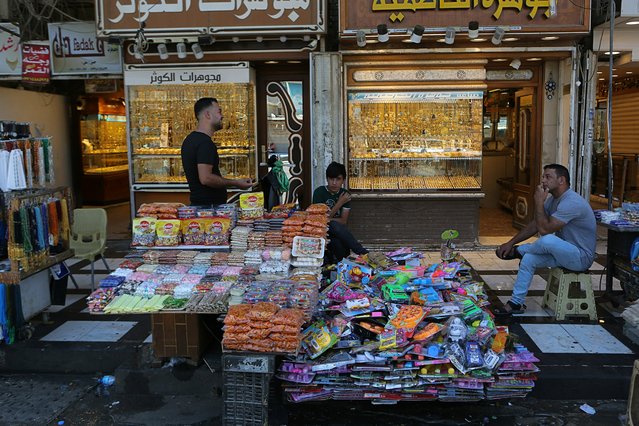 In this Wednesday, May 21, 2019, photo, street vendors and shop owners wait for customers outside the shrine of Imam Moussa al-Kadhim in Kadhimiya district in north Baghdad, Iraq. Many shop owners in the Shiite holy neighborhood of Kadhimiya, have seen their sales drop sharply over the past year since U.S. President Donald began reimposing sanctions on Iran, home to the largest number of Shiite Muslims around the world. (Photo by Khalid Mohammed/AP Photo) 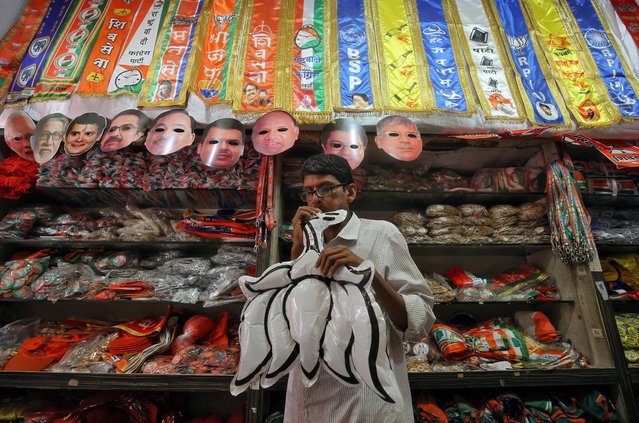 A man blows air into an inflatable logo of the Bharatiya Janata Party (BJP) inside a shop selling various political parties' merchandise in Mumbai, April 10, 2019. (Photo by Francis Mascarenhas/Reuters) 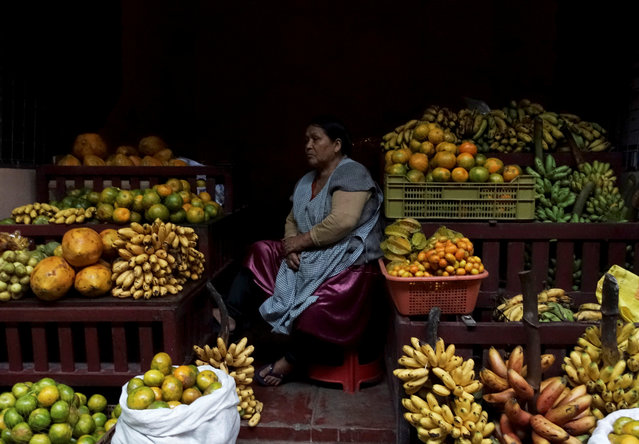 A woman sits at a fruit stall at a market in Villa Tunari in the Chapare region, Bolivia, May 17, 2019. (Photo by David Mercado/Reuters) 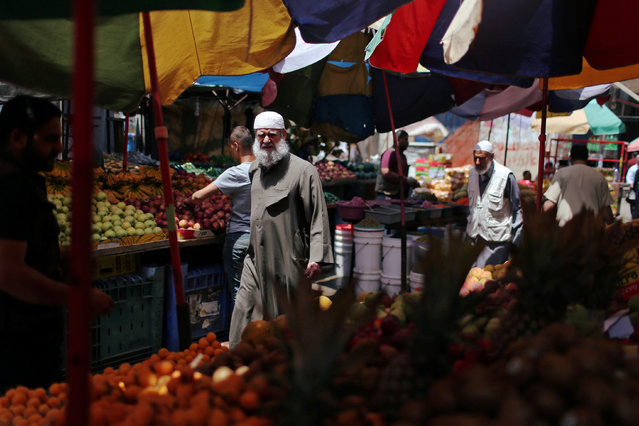 Palestinian shoppers walk in a market in Khan Younis refugee camp in the southern Gaza Strip on May 21, 2019. (Photo by Ibraheem Abu Mustafa/Reuters) 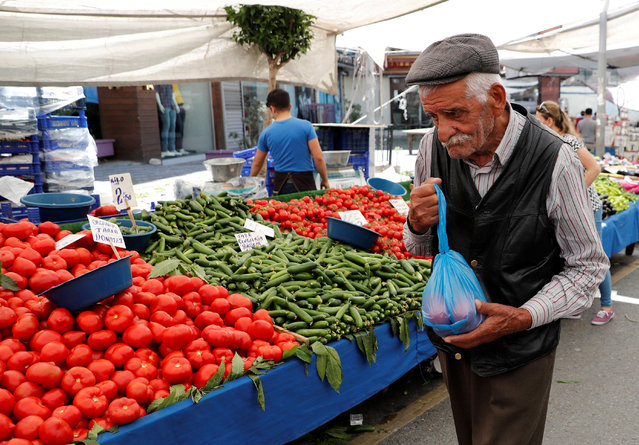 A man carries his shopping bag at a bazaar in Istanbul, Turkey, May 29, 2019. (Photo by Murad Sezer/Reuters) 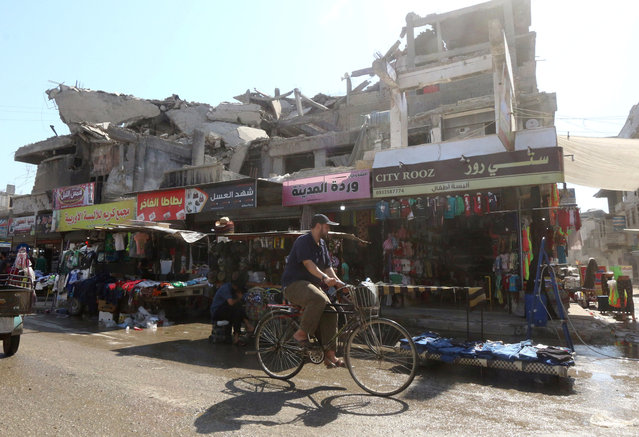 A man rides a bike passing by the shops along the street in Raqqa, Syria, May 29, 2019. (Photo by Aboud Hamam/Reuters) 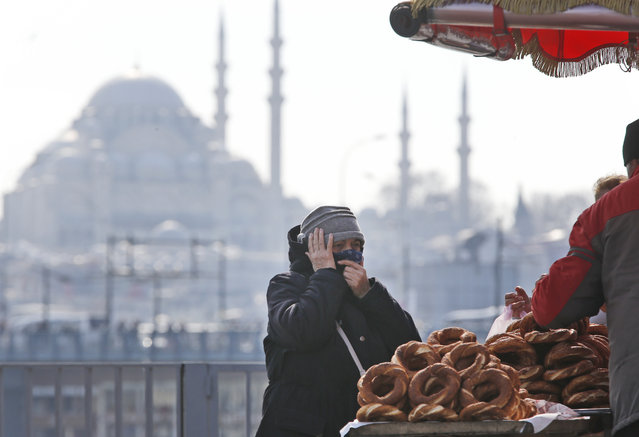 In this Thursday, April 4, 2019 photo, a woman, backdropped by the Suleymaniye mosque, buys simit, a pretzel-like snack, in Istanbul. The mood among opposition supporters in Turkey's biggest city is one of jubilation but also worry – fear that their win in Istanbul's mayoral race could be overturned in a recount taking place after the ruling party challenged the election results. (Photo by Lefteris Pitarakis/AP Photo) 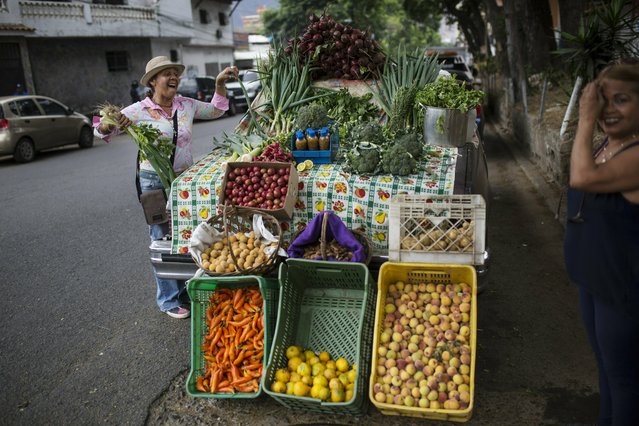 Nancy Espinoza, 55, who uses an old car as her stand, sells vegetables to a customer in Caracas, Venezuela, Friday, May 3, 2019. (Photo by Rodrigo Abd/AP Photo) 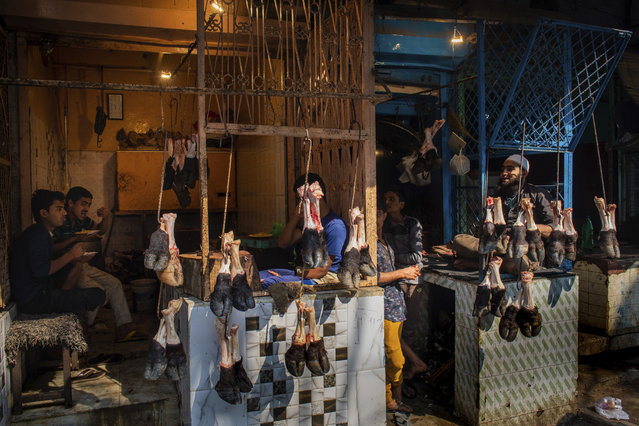 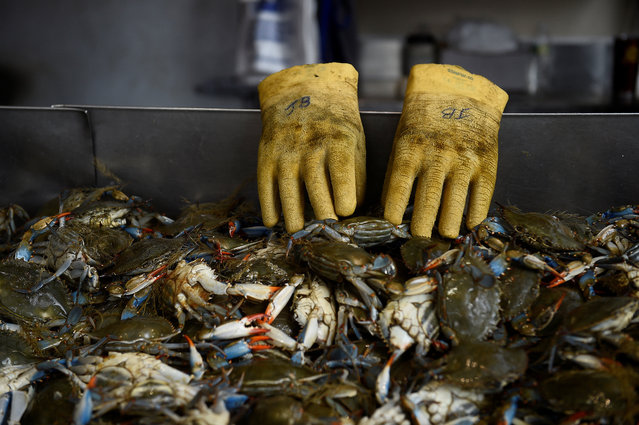 Empty gloves are seen at the side of a tray of Maryland Blue Crabs at Maine Avenue Fish Market which is the United States oldest fish market in continual operation since 1805, in Washington, U.S., May 6, 2019. (Photo by Clodagh Kilcoyne/Reuters) 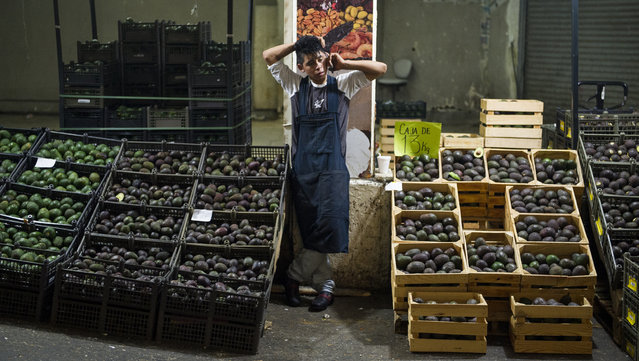 In this August 9, 2016 file photo, an avocado vendor talks on his cellphone at a market in Mexico City. Summary: The potential Trump tariffs are expected to hit U.S. avocado lovers more than Mexican producers. (Photo by Nick Wagner/AP Photo/File) 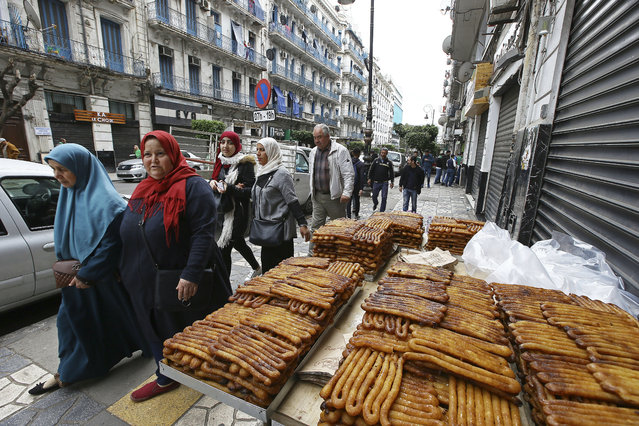 Women pass a roadside pastry stand when heading to a demonstration in Algiers, Friday April 5, 2019. (Photo by Sidali Djarboub/AP Photo) 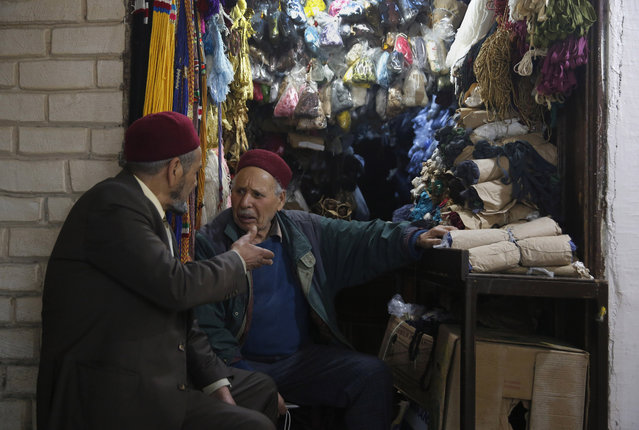