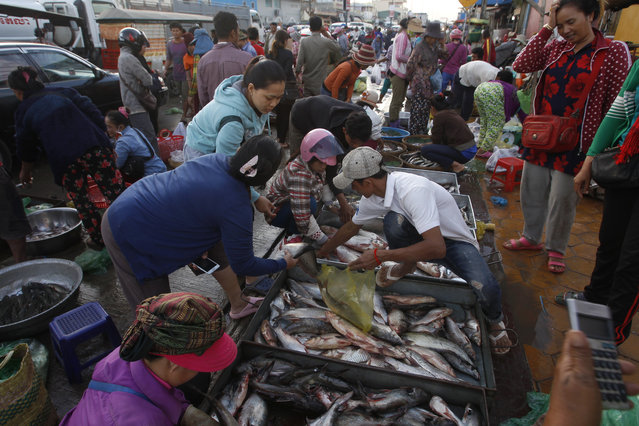 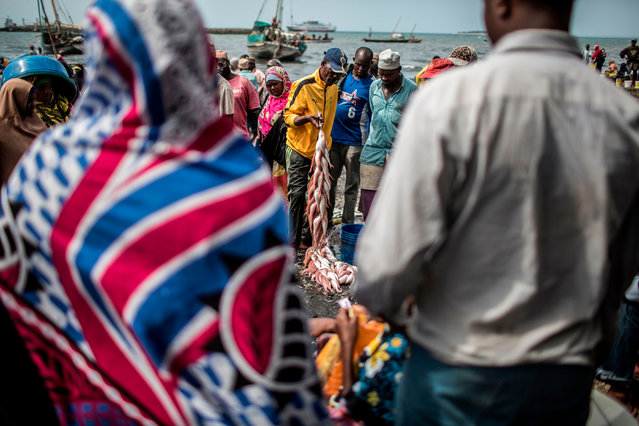 Local residents buy and sell fish at the Malindi Fish Market in Stone Town, on the island of Zanzibar, on December 28, 2017. (Photo by Gulshan Khan/AFP Photo) 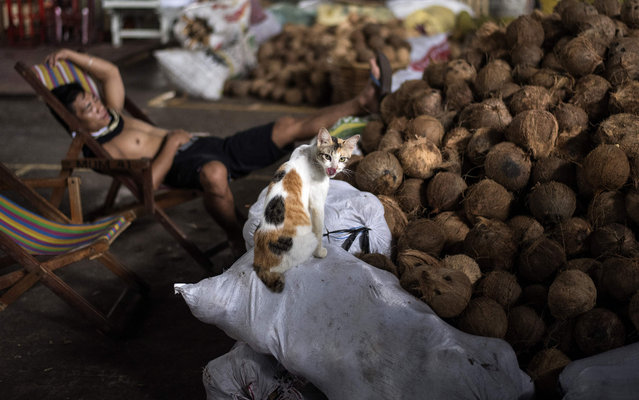 A cat sits on a sack of coconuts, as a worker takes a rest at a market in Manila on January 23, 2018. An estimated 10 million Filipinos work overseas and the money they send home is a major pillar of the Philippine economy. (Photo by Noel Celis/AFP Photo) 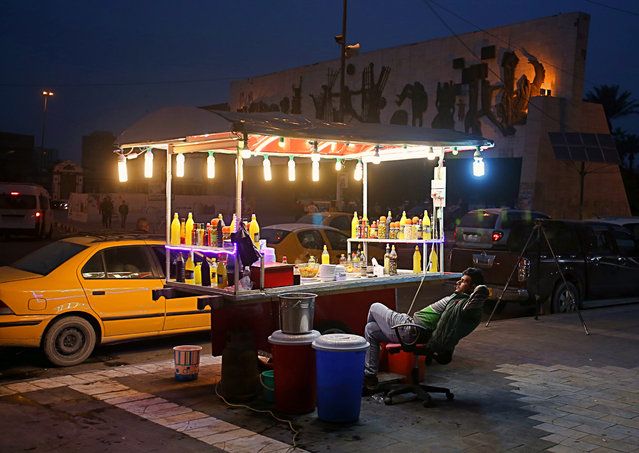 In this Thursday, February 22, 2018, photo, a chickpeas vendor waits for customers in Tahrir Square in Baghdad. Iraq's Shiites, Sunnis and Kurds have grown more fragmented and divided ahead of the national elections scheduled for May due to deep differences among each group that have spawned more and smaller alliances seeking to have a bigger share in the new parliament. (Photo by Karim Kadim/AP Photo) 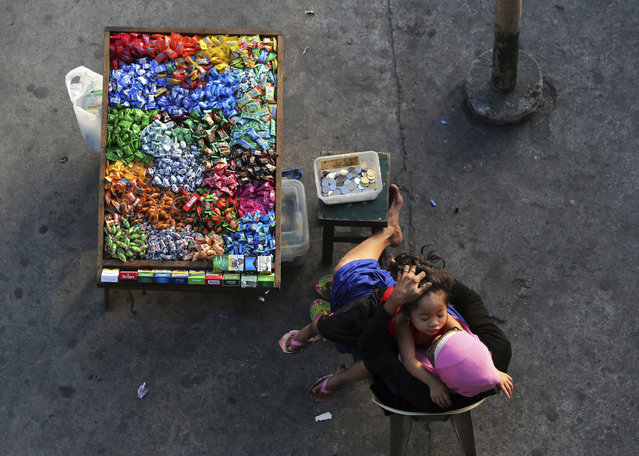 A woman arranges the hair of a girl as they sell candies and cigarettes beside a street in metropolitan Manila, Philippines on Friday, March 2, 2018. Makeshift stalls of street vendors are common along pedestrian lanes in the crowded capital. (Photo by Aaron Favila/AP Photo) 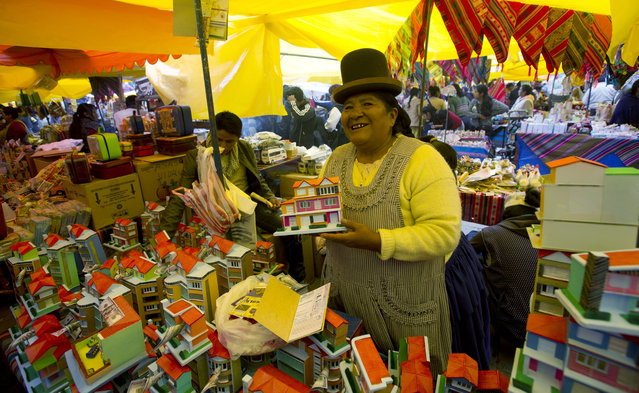 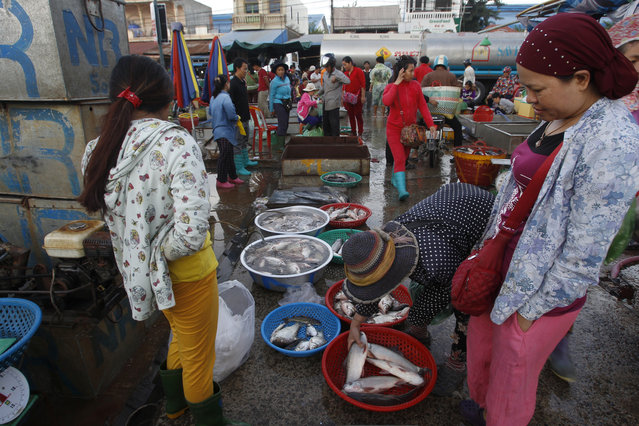 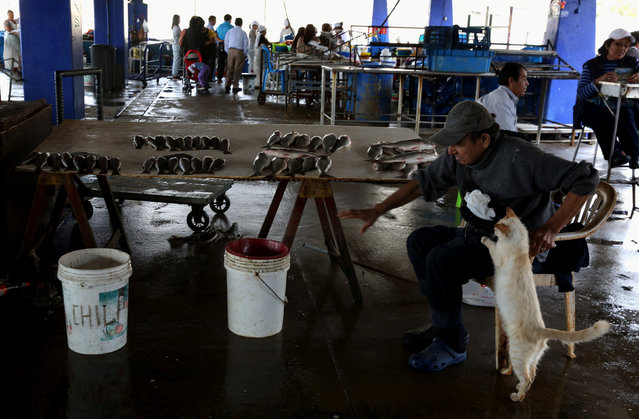 A man with a cat sells fish at a market at Pescadores beach in the Chorrillos district of Lima, Peru, November 29, 2017. (Photo by Mariana Bazo/Reuters) 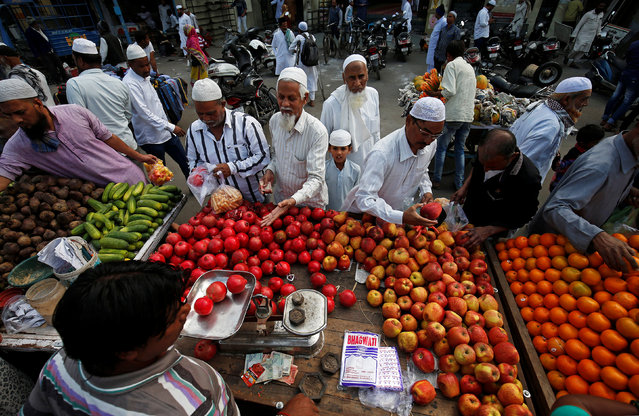 People buy fruits and vegetables at a market in Ahmedabad, December 12, 2018. (Photo by Amit Dave/Reuters) 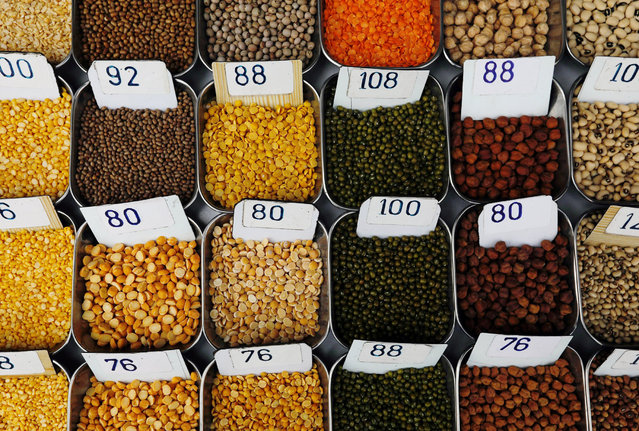 Price tags are seen on the samples of pulses that are kept on display for sale at a market in Mumbai, India January 29, 2018. (Photo by Danish Siddiqui/Reuters) 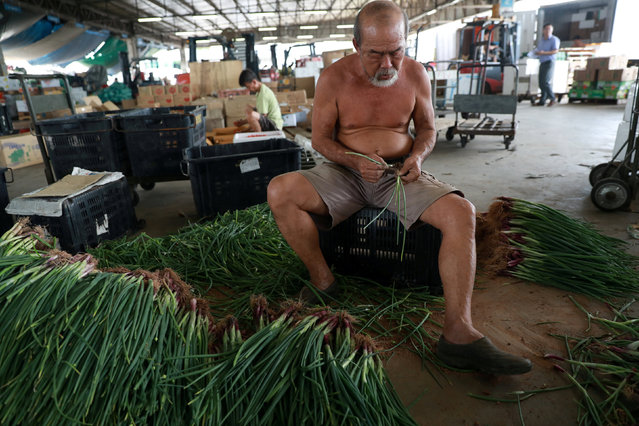 A man prepares vegetables at a market in Singapore January 29, 2018. (Photo by Soe Zeya Tun/Reuters) 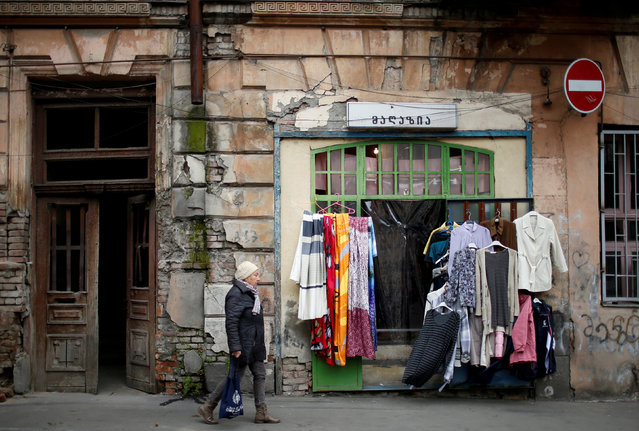 A woman passes by a second hand shop in Tbilisi, Georgia, February 16, 2018. (Photo by David Mdzinarishvili/Reuters) 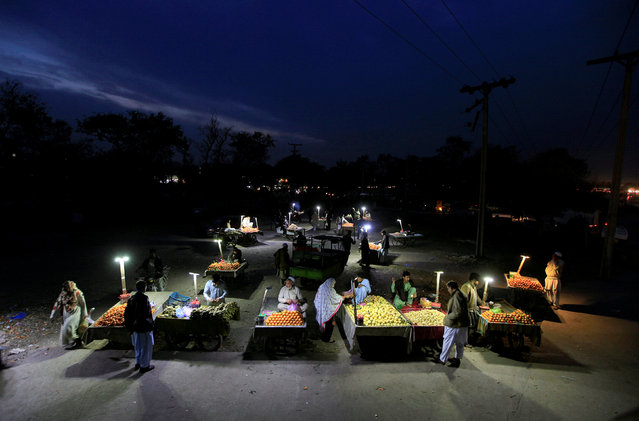 Customers shop at an open air evening fruit market along a road in Rawalpindi, Pakistan February 20, 2018. (Photo by Faisal Mahmood/Reuters) 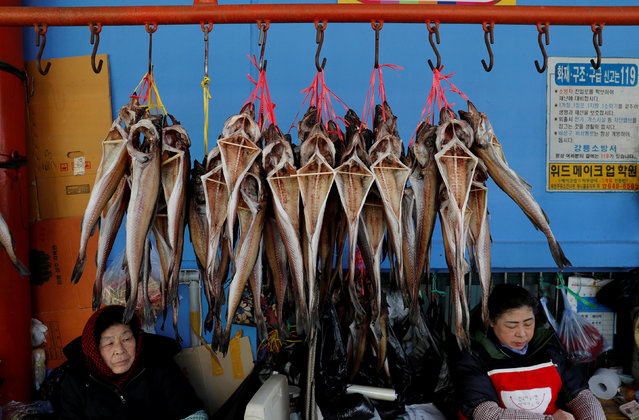 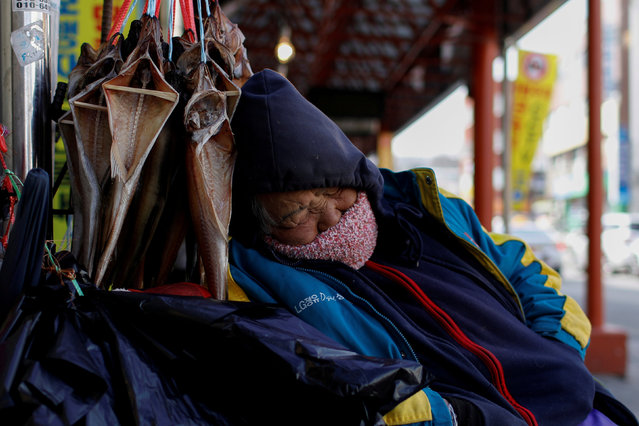 A vendor sleeps in a local market in Gangneung, South Korea, February 23, 2018. (Photo by Mike Segar/Reuters) 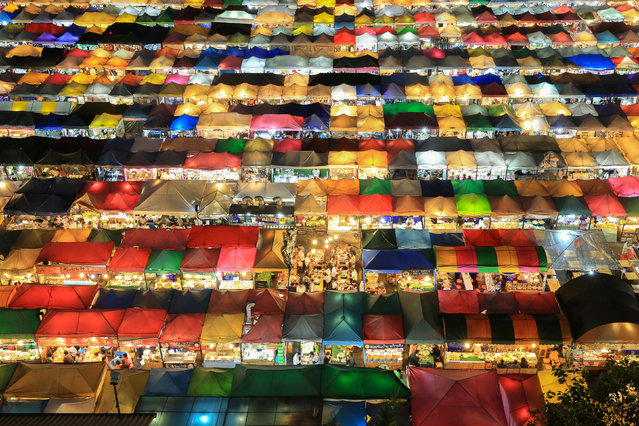 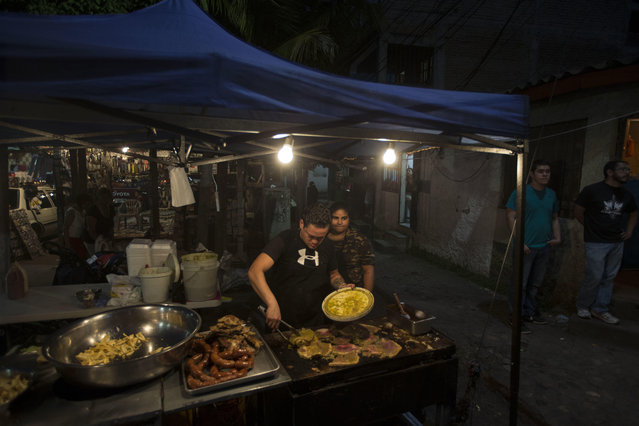 A couple sells roast meat near where anti-government demonstrators gather to protest at the Hato neighborhood in Tegucigalpa, Honduras, Friday, December 8, 2017. (Photo by Moises Castillo/AP Photo) 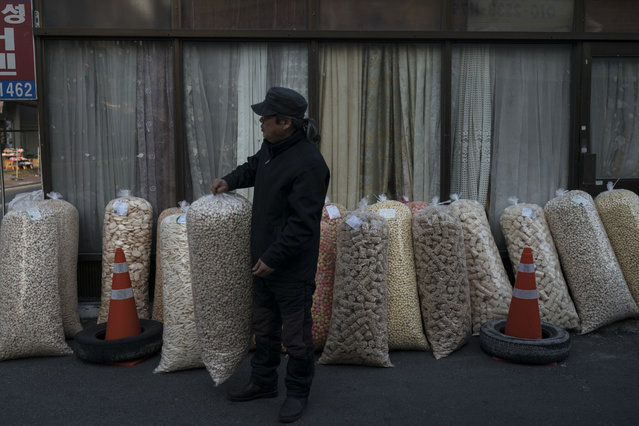 A man sells large bags of popped grains at the traditional market in Gangneung, South Korea, Tuesday, February 13, 2018. Markets like this one are a common sight in South Korea. And while the Pyeongchang promoters are hoping it will impress the foreign tourists here for the games, it hasn’t been given much of an Olympic makeover. (Photo by Felipe Dana/AP Photo) 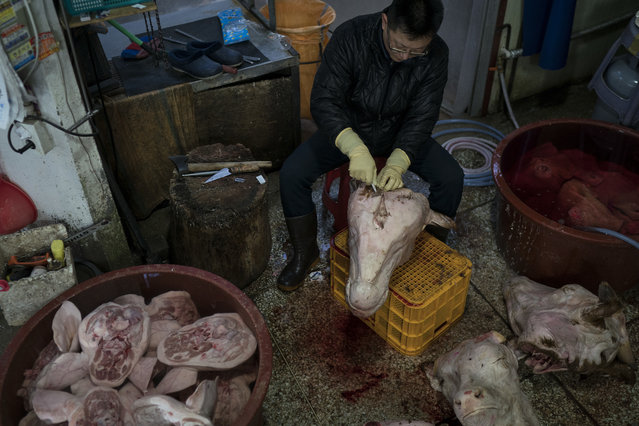 A man cleans a cow's head for sale at the traditional market in Gangneung, South Korea, Tuesday, February 13, 2018. (Photo by Felipe Dana/AP Photo) 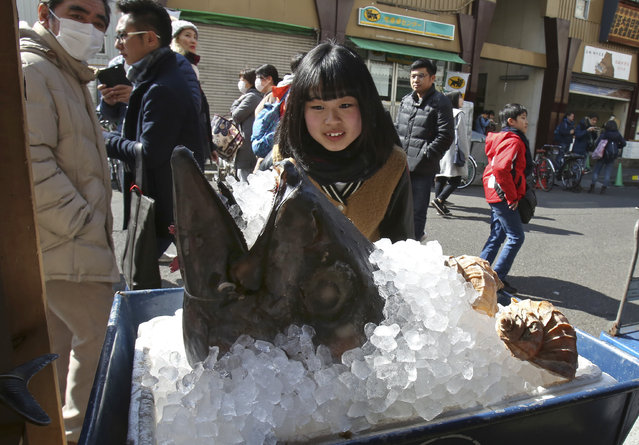 A woman looks at head of bluefin tuna on display in front of a store at Tsukiji fish market in Tokyo, Monday, February 19, 2018. The large bluefin are particularly valuable in Japan, where they are considered a premium sushi and sashimi fish. A single fish sold for more than $1.75 million at an auction in Japan in 2013. (Photo by Koji Sasahara/AP Photo)
Edit Del
06 Mar 2018 00:05:00, post received 0 comments
Publication archive:
←   →
Popular tags:
All tags
Last searches: