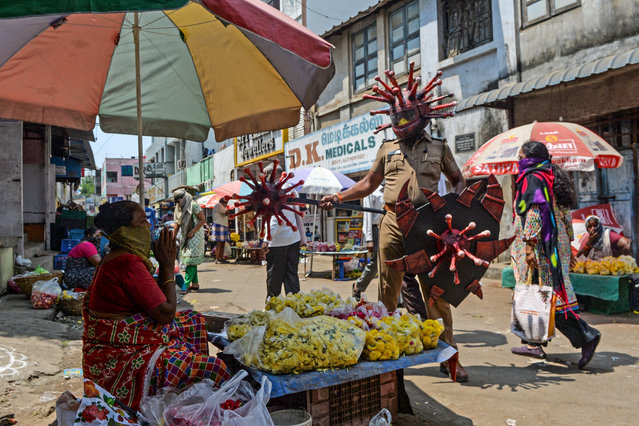 A policeman (R) wearing a coronavirus-themed outfit composed of helmet, mace and shield, gestures towards a vendor at a market to raise awareness about social distancing, during a government-imposed nationwide lockdown as a preventive measure against the COVID-19 coronavirus, in Chennai on April 2, 2020. (Photo by Arun Sankar/AFP Photo) 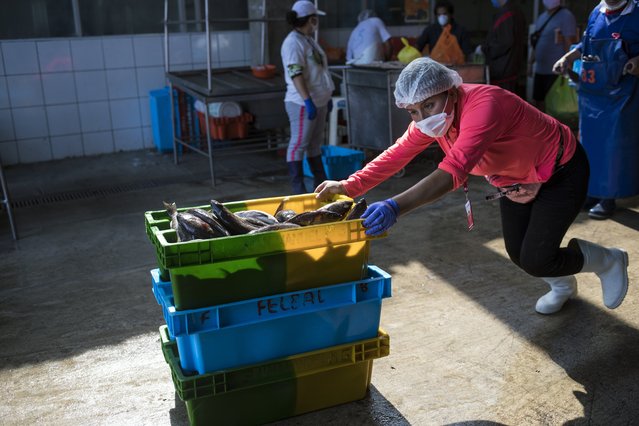 A worker, wearing a face mask as a measure against the spread of the new coronavirus, pushes crates of fish at a marine fish market in Lima, Peru, Monday, April 6, 2020. (Photo by Rodrigo Abd/AP Photo) 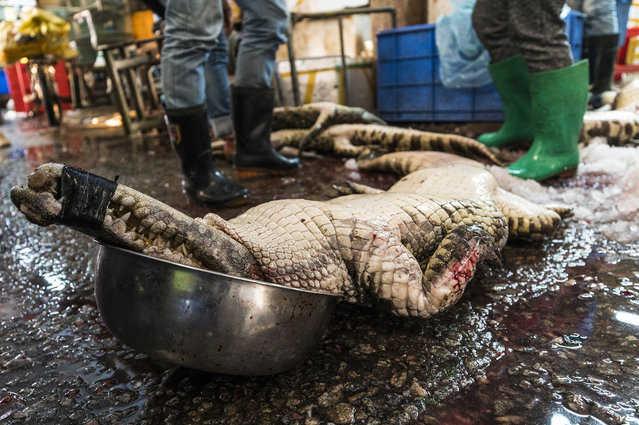 A dead crocodile is seen on Huangsha Seafood Market in Guangzhou, Guandong Province, China, 22 January 2018. Tsukiji Market of China or Huangsha Seafood Market is biggest one in Southern China and one of the biggest in China, as there are literally hundreds of different varieties of fish and seafood scattered throughout the market. Since the proximity of the fish market is so close to the Zhujiang River, it's quite easy for the large fishing vessels and fishermen to unload their fresh catch right at the market, which ensures that the fish and seafood remain fresh. Fish and other seafood are coming there from all around the globe. Seafood Market is full of different kinds of live fish, live shellfish, and live seafood on display in crystal clear tanks and it's common to see 5-star chefs, retailers and expats to source for fresh and high-quality seafood supplies for reasonable prices. While it is a wholesale fish market, since many Guangzhou restaurants and businesses come to purchase their seafood here, the public is welcome to come and even purchase. Many local Chinese have the vendors slice up fresh salmon fillets to take home or carry seafood into one of the nearby specialty restaurants, where they will cook if for them and serve it with vegetables and other side dishes of their choice. One of the biggest attractions for both, tourists and buyers, on market are crocodiles, which are brought there alive in wooden cases with taped jaws so they can?t accidentally bite. They are from crocodile farms from Guangdong, China and from Vietnam. Crocodile meat is popular in most Asian countries and it is consider as delicate one. Crocodiles weight from 10 to 25 kg and bigger ones are about 2 years old. They cost about 70 RMB (8.90 EURO) when bout as whole, or if you buy as parts most expensive and appreciated parts are paws 120 RMB (15.26 EURO) per kg, and tail 100 RMB (12.72 EURO) per kg. (Photo by Aleksandar Plavevski/EPA/EFE) 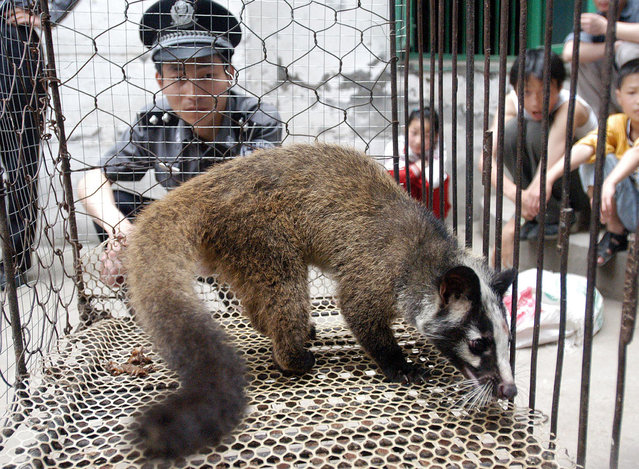 File picture taken 26 May 2003 shows a policeman watching over a civet cat captured in the wild by a farmer in Wuhan, central China's Hubei province. AFP reports 05 September 2003 new research adding weight to the theory a SARS-like virus jumped from animals to humans in South China, highlighting fears of another outbreaof the deadly disease. (Photo by AFP Photo/China Stringer Network) 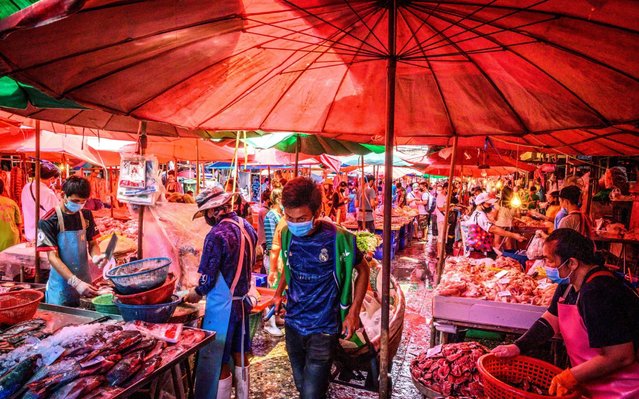 People crowd to buy meat and fish at Khlong Toei wet market despite fears of the spread of the COVID-19 coronavirus in Bangkok on April 14, 2020. (Photo by Mladen Antonov/AFP Photo) 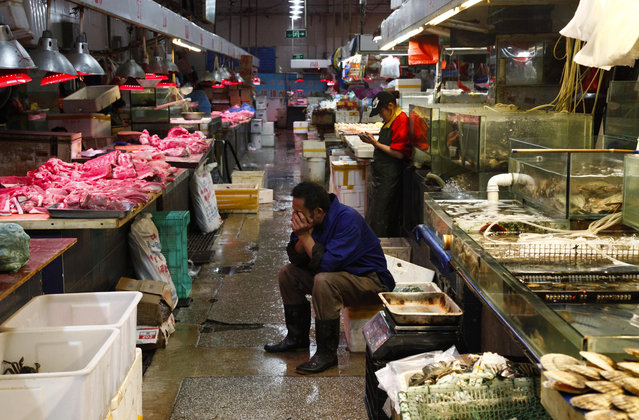 A Chinese vendor takes a rest amid stalls of meat and seafood at a public market in Beijing, China, 11 September 2015. Consumer inflation in China reached its highest point for a year as consumer price index was up 2 per cent year-on-year in August, while the producer price index was down 5.9 per cent and indicated the biggest drop in more than five years, the National Bureau of Statistics (NBS) said on 10 September. (Photo by Rolex Dela Pena/EPA/EFE) 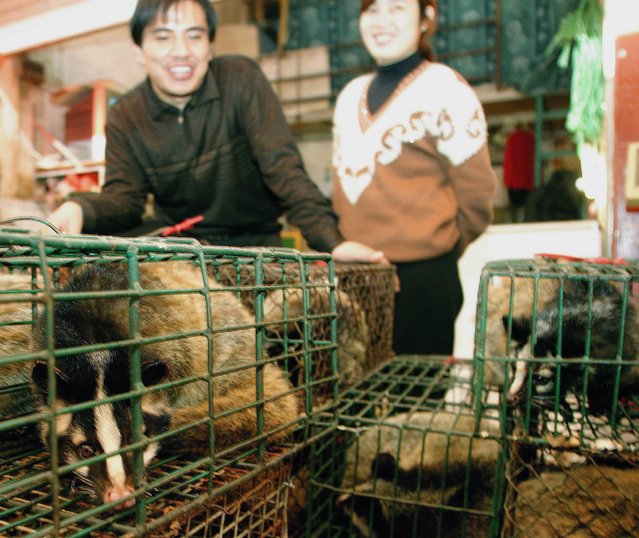 Civet cats await there fate in the Xin Yuan animal meat market, Guangzhou ,China Monday, 5 January 2004. China is to slaughter 10,000 civet cats and ban wild animal markets in southern Guangdong province in a bid to stamp out SARS, state media reported Monday. Hong Kong has confirmed that a Guangzhou resident has SARS similar to that of the corona virus that the masked palm civet carries. (Photo by Paul Hilton/EPA/EFE) 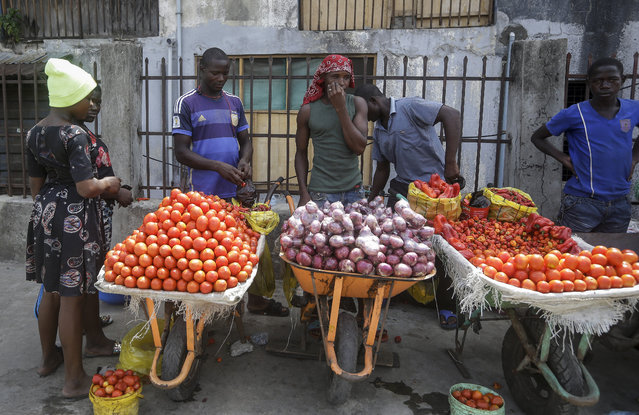 In this April 13, 2020, file photo, a woman buys tomatoes and onions from street sellers in Lagos, Nigeria. Lockdowns in Africa limiting the movement of people in an attempt to slow the spread of the coronavirus are threatening to choke off supplies of what the continent needs the most: Food. (Photo by Sunday Alamba/AP Photo/File) 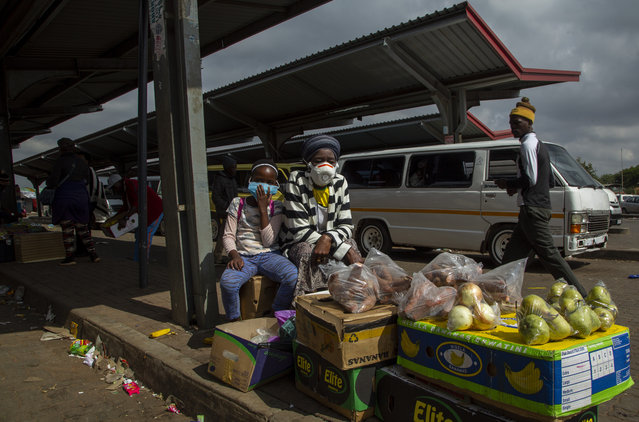 A woman and her daughter wearing face masks to protect against coronavirus, sell fruit and vegetables at the taxi station in Lenasia, south of Johannesburg, South Africa, Wednesday, April 8, 2020. South Africa and more than half of Africa's 54 countries have imposed lockdowns, curfews, travel bans or other restrictions to try to contain the spread of the highly contagious COVID-19 coronavirus. (Photo by Themba Hadebe/AP Photo) 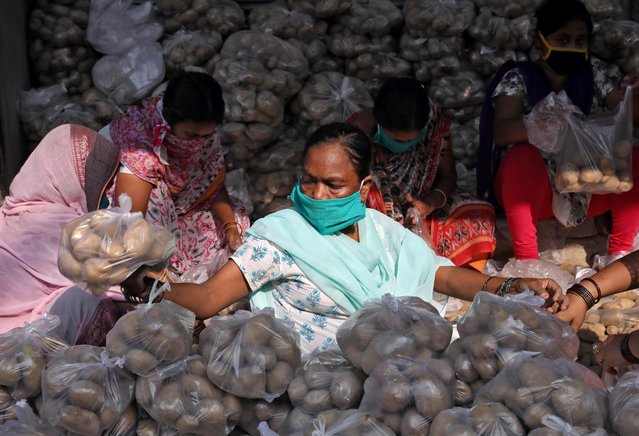 Volunteers pack potatoes to be distributed among poor people during a 21-day nationwide lockdown to slow the spreading of the coronavirus disease (COVID-19), at a residential area in Kolkata, India, April 2, 2020. (Photo by Rupak De Chowdhuri/Reuters) 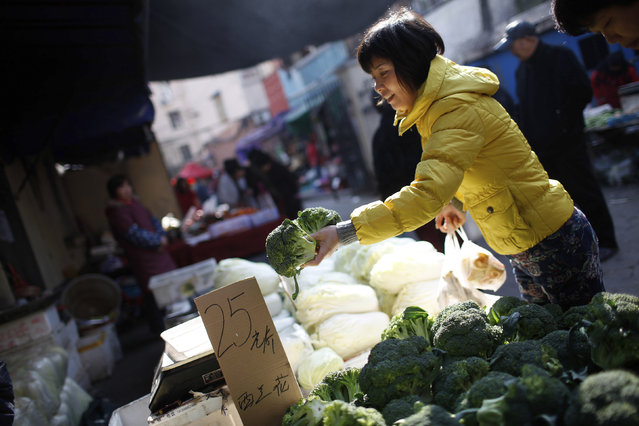 A woman holds up cauliflowers at a stall inside a market in Shanghai December 9, 2011. China's annual inflation rate tumbled in November to 4.2 percent, the lowest level in more than a year, fuelling expectations of further monetary policy easing to combat deteriorating domestic and international economic conditions. The rate has dropped rapidly since hitting a three-year high of 6.5 percent in July and is now at a pace closer to the full-year government target for 2011 of 4 percent. (Photo by Aly Song/Reuters) 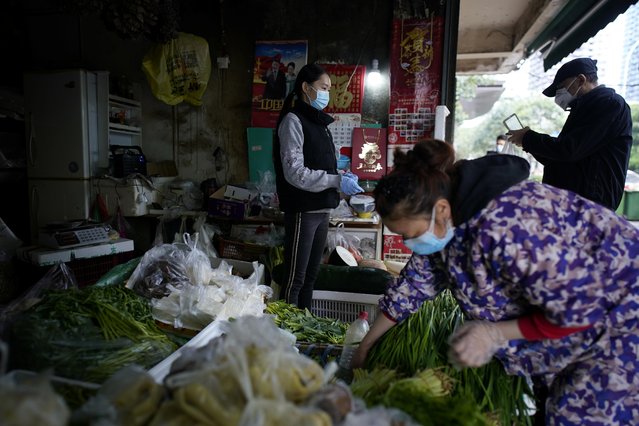 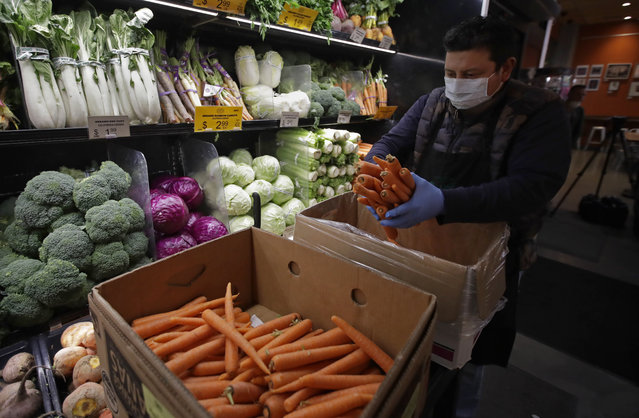 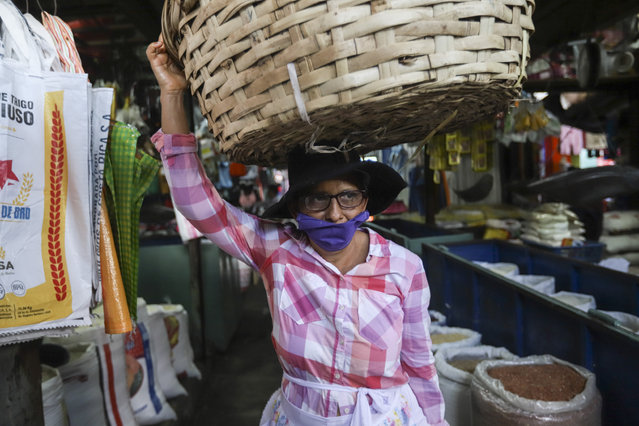 A fruit vendor, wearing a protective face mask, makes her way through a popular market in Managua, Nicaragua, Tuesday, April 7, 2020. Restaurants are empty, there's little traffic in the streets and beach tourists are sparse headed into Holy Week despite the government's encouragement for Nicaraguans to go about their normal lives. (Photo by Alfredo Zuniga/AP Photo) 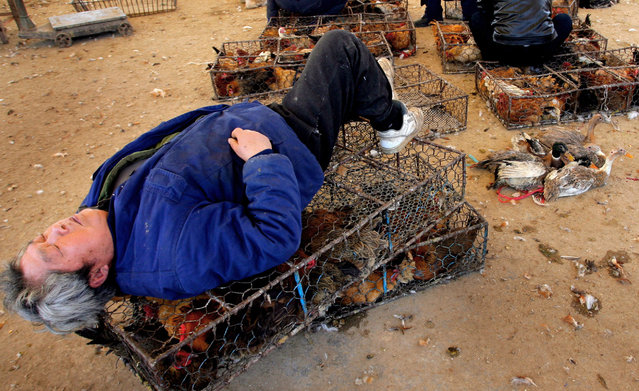 A Chinese man sleeps on a chicken cage at a wholesale market in Nanjing, capital of China's Jiangsu province March 16, 2006. China faces an uphill struggle to contain bird flu ahead of an expected spike in infections during spring, hampered by surveillance problems, ignorance and the country's sheer size, health and government officials said. (Photo by Reuters/China Stringer Network) 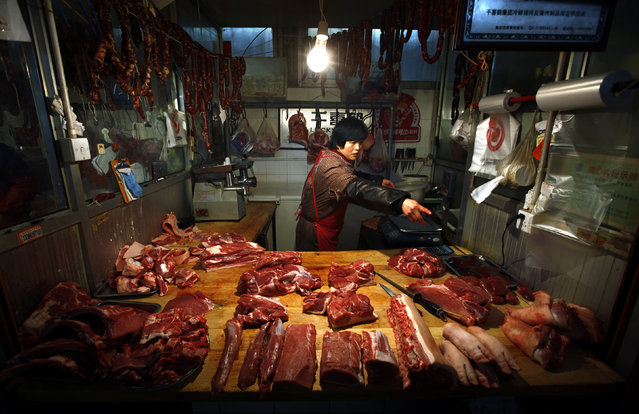 A woman points for a customer, to cuts of pork for sale at her small stall located in a meat market in central Beijing, January 6, 2012. The price of pork in China could soon rival U.S. payrolls as the world's most watched economic indicator. International investors are increasingly focused on domestic demand in the world's second-largest economy as their key measure of global economic health. (Photo by David Gray/Reuters) 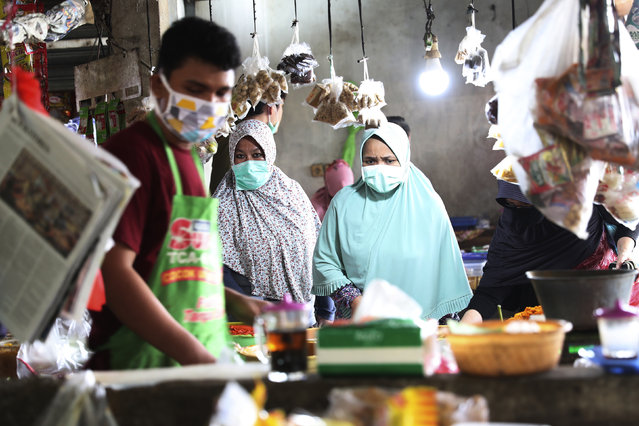 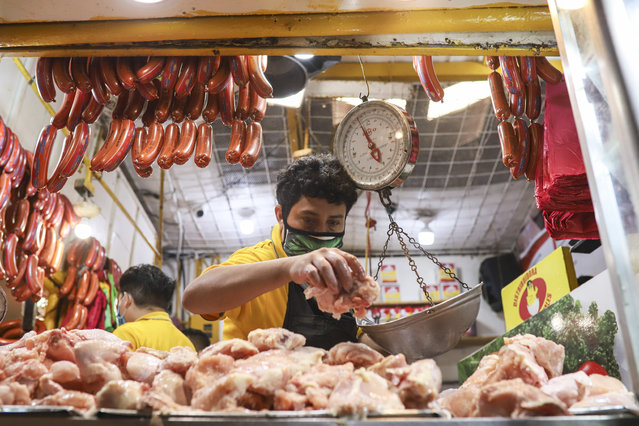 An employee weighs an order of chicken at a popular market in Managua, Nicaragua, Tuesday, April 7, 2020. (Photo by Alfredo Zuniga/AP Photo) 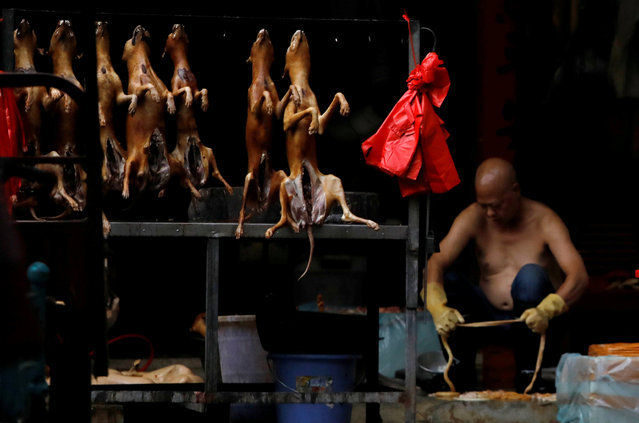 Butchered dogs displayed for sale at a stall inside a meat market during the local dog meat festival, in Yulin, Guangxi Zhuang Autonomous Region, China on June 21, 2018. (Photo by Tyrone Siu/Reuters) 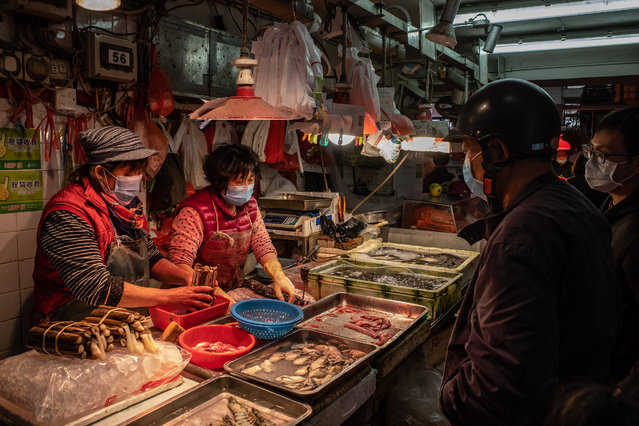 Residents wearing face masks purchase seafood at a wet market on January 28, 2020 in Macau, China. The number of cases of a deadly new coronavirus rose to over 4000 in mainland China Tuesday as health officials locked down the city of Wuhan last week in an effort to contain the spread of the pneumonia-like disease which medicals experts have confirmed can be passed from human to human. In an unprecedented move, Chinese authorities put travel restrictions on the city which is the epicentre of the virus and neighbouring municipalities affecting tens of millions of people. At least six people have reportedly contracted the virus in Macau. The number of those who have died from the virus in China climbed to over 100 on Tuesday and cases have been reported in other countries including the United States, Canada, Australia, France, Thailand, Japan, Taiwan and South Korea. (Photo by Anthony Kwan/Getty Images)
Edit Del
17 Apr 2020 00:05:00, post received 0 comments
Publication archive:
←   →
Popular tags:
All tags
Last searches: