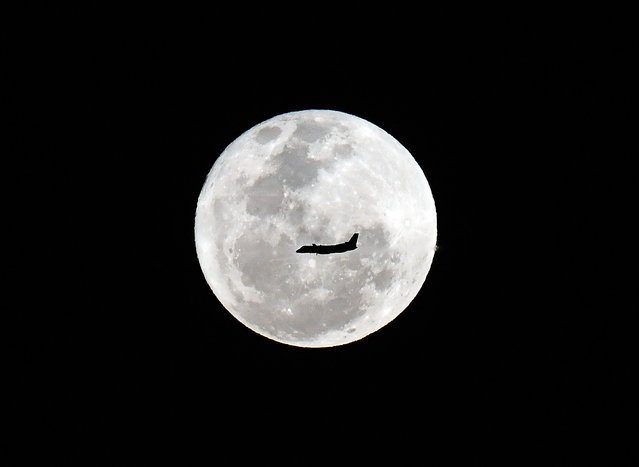 A plane flies in front of a full moon in Sydney on September 25, 2018. (Photo by Saeed Khan/AFP Photo) 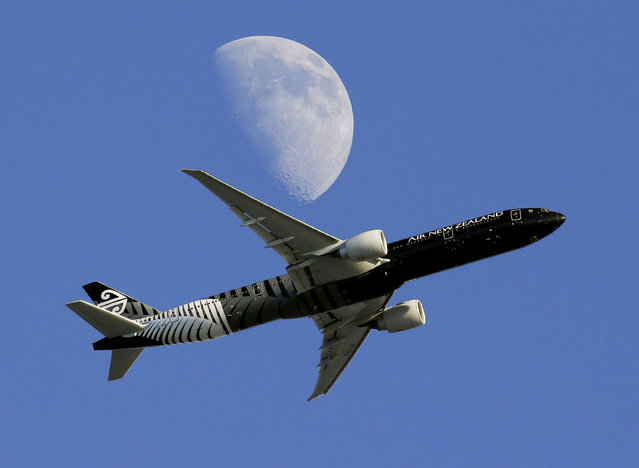 In this August 23, 2015, file photo, an Air New Zealand passenger plane flies past the moon on its way to the Los Angeles International Airport from London, in Whittier, Calif. Air New Zealand said a drone came within meters of a flight descending into Auckland Airport from Tokyo, putting the safety of 278 passengers and crew at risk. The national carrier is calling for prison terms for drone operators who endanger lives after the incident Sunday, March 25, 2018. (Photo by Nick Ut/AP Photo) 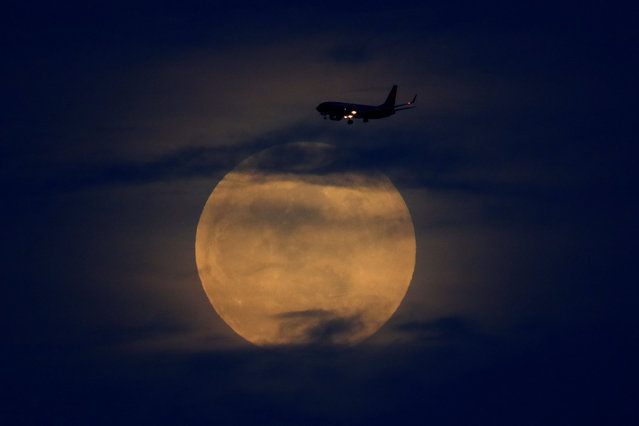 A full moon rises between clouds as a landing commercial jet approaches the airport before the start of a total lunar eclipse that is being called a “Super Blood Wolf Moon” in San Diego, California, U.S., January 20, 2019. (Photo by Mike Blake/Reuters) 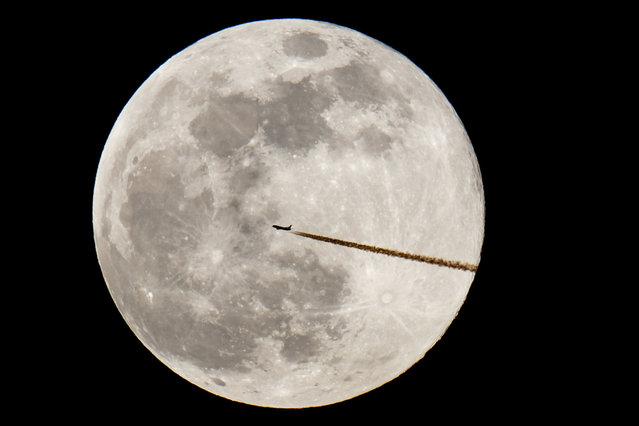 A plane flies past a full moon, Tuesday, February 19, 2019, in Nuremberg, Germany. Tuesday’s full moon, or supermoon, appears brighter and bigger than other full moons because it is close to its perigee, which is the closest point in its orbit to Earth. (Photo by Daniel Karmann /dpa via AP Photo) 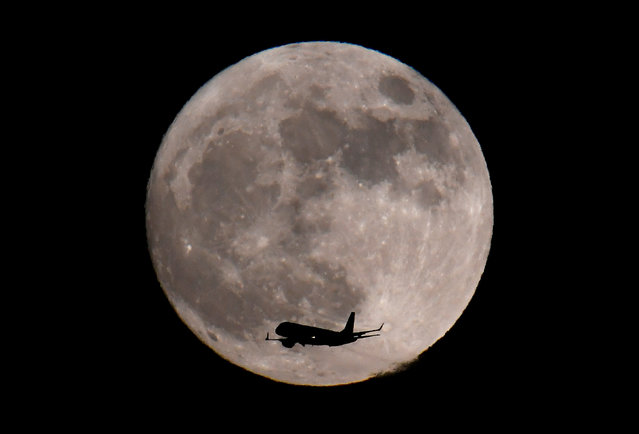 A passenger plane, with a 'supermoon' full moon seen behind, makes its final landing approach towards Heathrow Airport in London, Britain, January 1, 2018. (Photo by Toby Melville/Reuters) 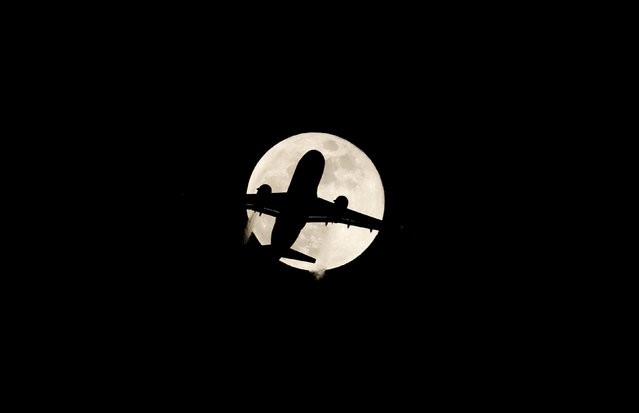 General view as a plane flies overhead during the English Premier League 25 th round match between FC Chelsea and AFC Bournemouth at the Stamford Bridge in London, Great Britain on January 31, 2018. (Photo by John Sibley/Reuters/Action Images)

A British Airways passenger plane flies in front of the moon above London, Britain, May 3, 2018. (Photo by Toby Melville/Reuters) 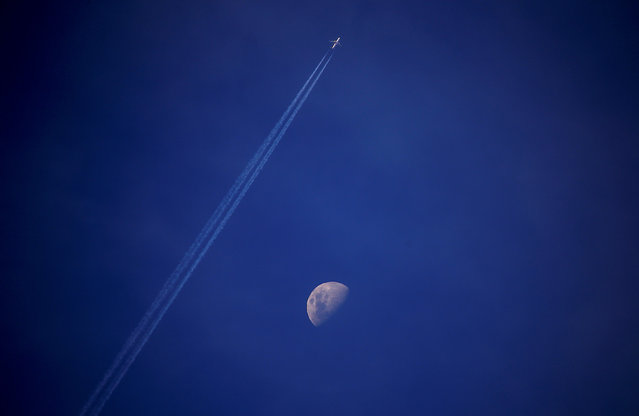 A plane leaves a vapor trail as it flies past the moon above the town of Gunnedah, New South Wales, Australia July 21, 2018. (Photo by David Gray/Reuters) 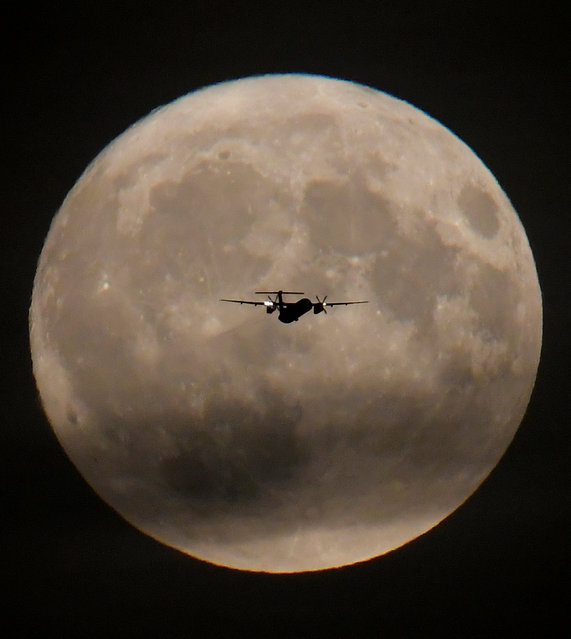 A passenger plane is seen with the full moon behind as it begins its final landing approach to Heathrow Airport in London, Britain, September 24, 2018. (Photo by Toby Melville/Reuters) 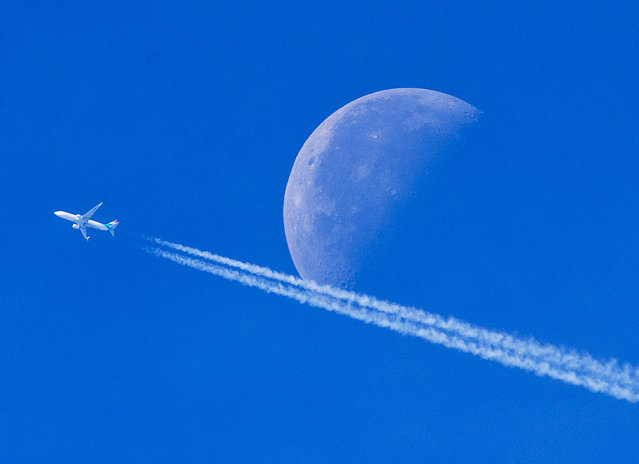 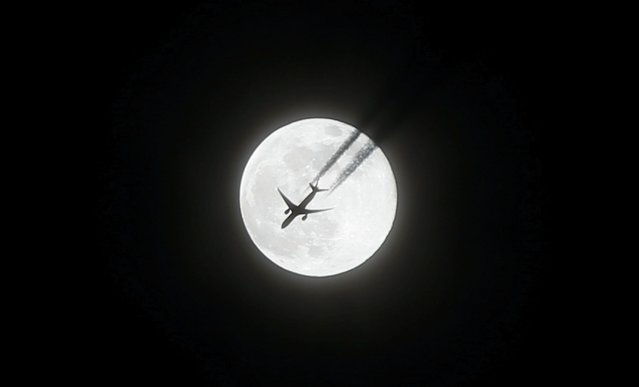 A plane flies as the Supermoon is seen in Brussels, Belgium on February 20, 2019. The Supermoon is a full moon that almost coincides with the closest distance that the Moon reaches to Earth in its elliptic orbit, resulting in a larger-than-usual visible size of the lunar disk as seen from Earth. (Photo by Dursun Aydemir/Anadolu Agency/Getty Images)
Edit Del
21 Feb 2019 00:03:00, post received 0 comments
Publication archive:
←   →
Popular tags:
All tags
Last searches: