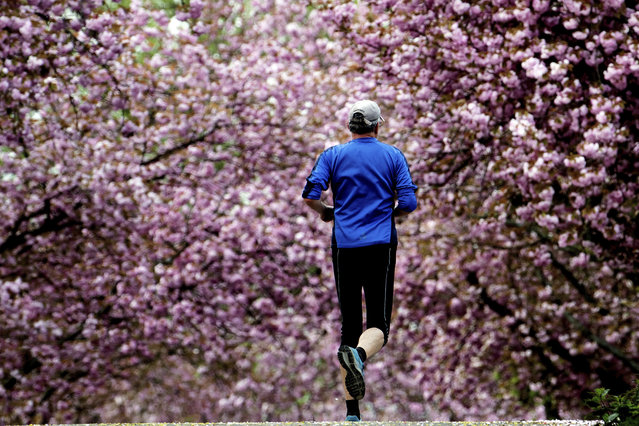 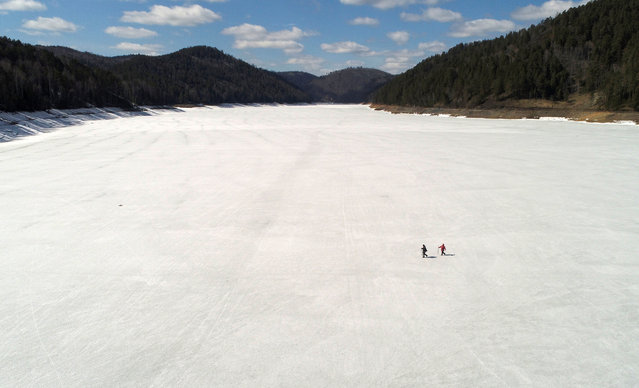 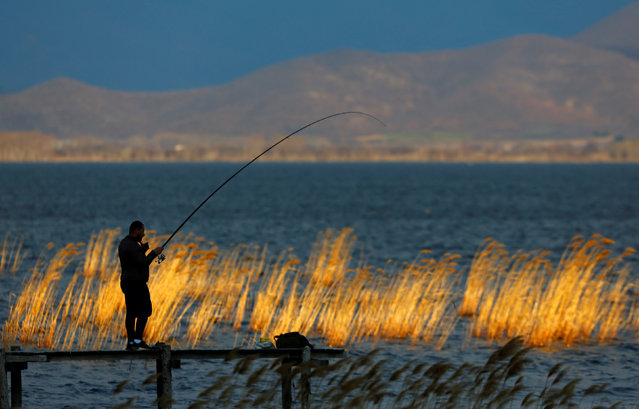 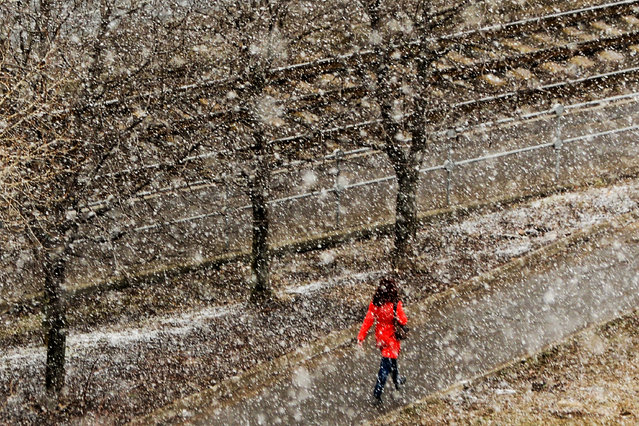 A woman walks towards tram lines during a snowfall in Moscow on March 29, 2019. (Photo by Kirill Kudryavtsev/AFP Photo) 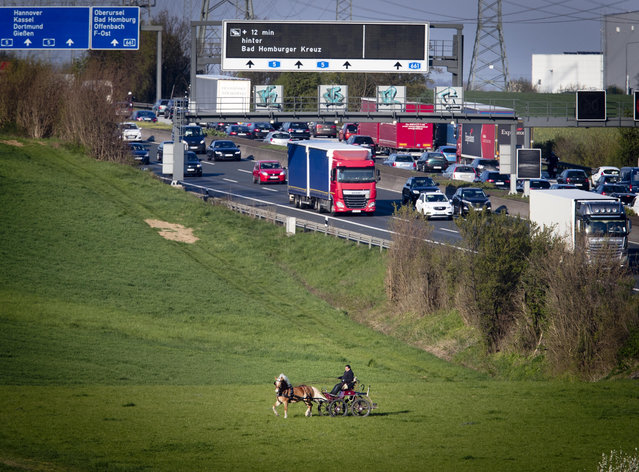 A man rides his horse and carriage over a meadow near the highway in Frankfurt, Germany, Thursday, April 11, 2019. (Photo by Michael Probst/AP Photo) 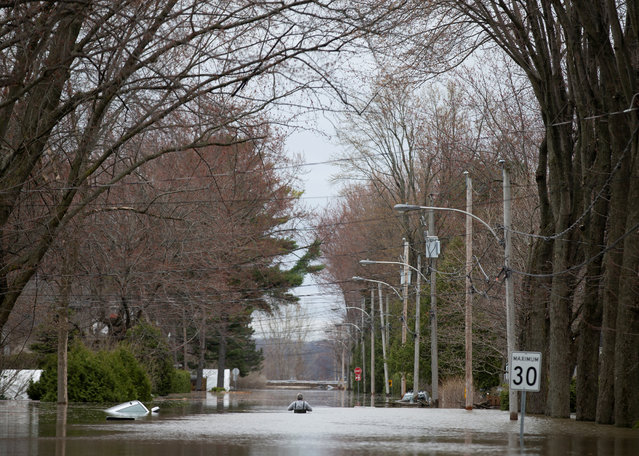 Resident Rene Lalumiere, walks down his flooded street after trying to reach his home but finding the water level too high, in Sainte-Marthe-sur-le-Lac, Quebec, Canada April 28, 2019. (Photo by Christinne Muschi/Reuters) 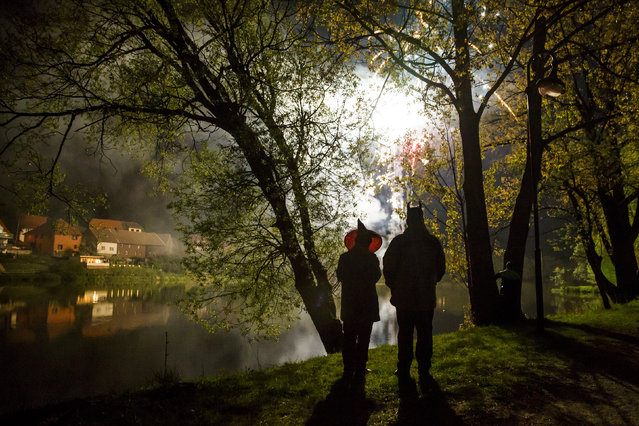 People stand by a lake as they watch fireworks explode over a Walpurgisnacht pagan festival in the town of Stiege, in the Harz mountain region, April 30, 2014. Legend has it that on Walpurgisnacht or May Eve, witches fly their broomsticks to meet the devil at the summit of the Brocken Mountain in Harz. In towns and villages scattered throughout the mountain region, locals make bonfires, dress in devil or witches costumes and dance into the new month of May. Picture taken April 30, 2014. (Photo by Thomas Peter/Reuters) 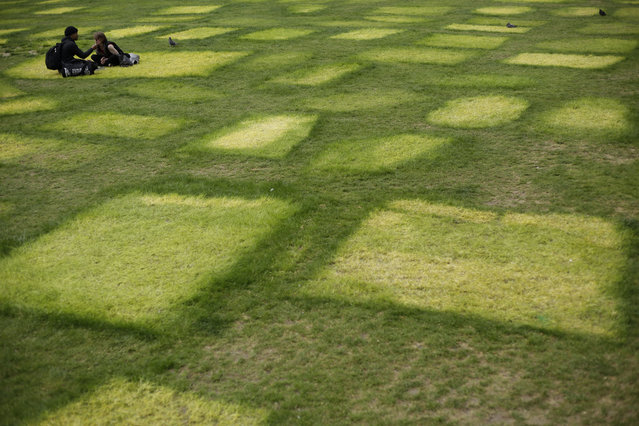 People sit eating next to tent marks outlined on grass from where Extinction Rebellion climate protesters had set up a camp in Marble Arch, London, Friday, April 26, 2019. Extinction Rebellion ended its remaining blockades in London on Thursday evening with a closing ceremony, after disrupting the British capital for 10 days. The non-violent protest group is seeking negotiations with the government on its demand to make slowing climate change a top priority. (Photo by Matt Dunham/AP Photo) 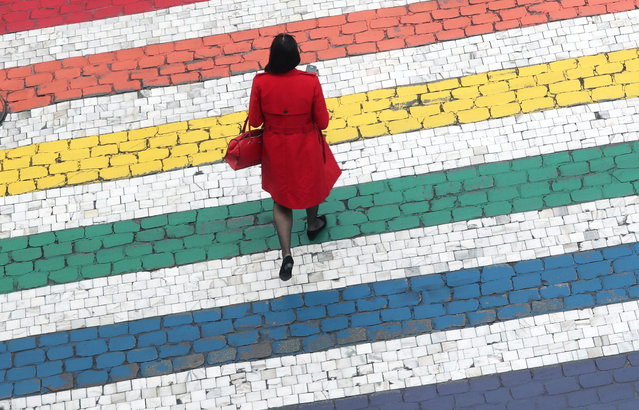 A woman crosses a road outside the EU Parliament ahead of the EU elections in Brussels, Belgium, May 22, 2019. (Photo by Yves Herman/Reuters) 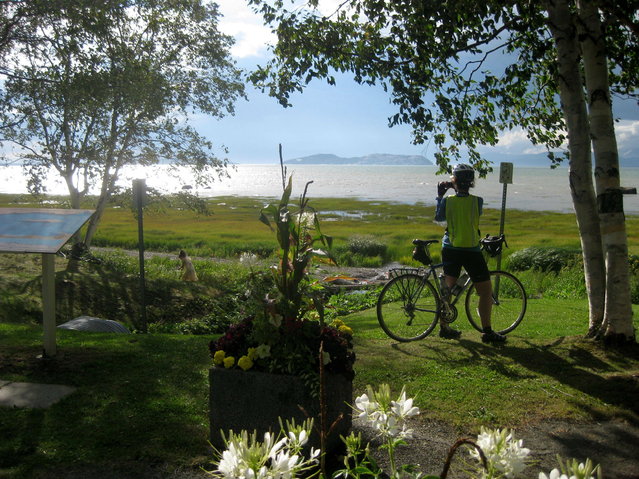 A cyclist takes in the St. Lawrence vista at Notre-Dame-du-Portage, Quebec, on Aug. 12, 2015. Along the south shore of the St. Lawrence River in this area of around Kamouraska, the panorama of river, sky, flowers and gardens defines the magic of bicycling the Route Verte network in Quebec. (Photo by Cal Woodward/AP Photo) 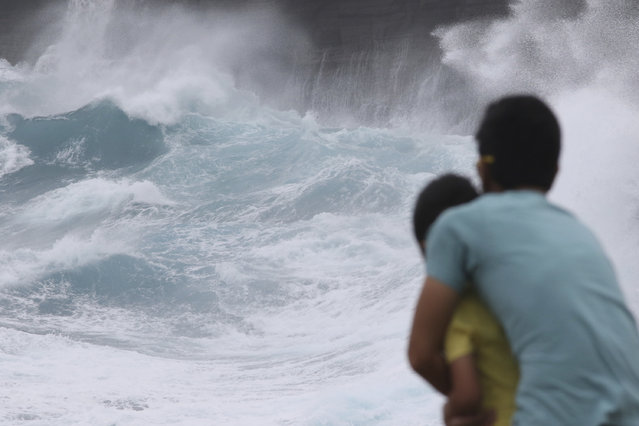 In this August 24, 2018 file photo, a man and his son watch as waves crash off sea cliffs along the southeast shore of Oahu as Hurricane Lane approaches Honolulu. Some of Hawaii's most iconic beaches could soon be underwater as rising sea levels caused by global warming overtake its white sand beaches and bustling city streets. That’s alarming for a state where beach tourism is the primary economic driver. (Photo by Caleb Jones/AP Photo/File) 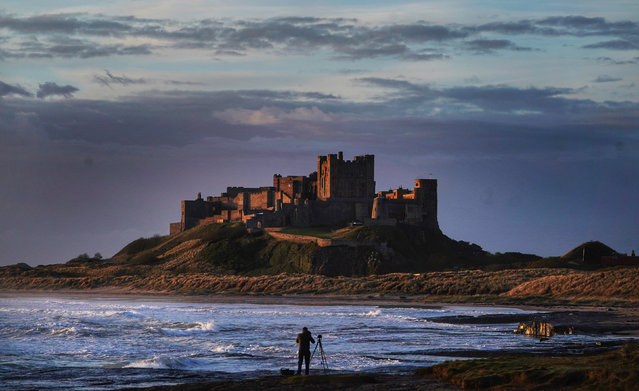 A photographer lines up his shot at Bamburgh Castle in Northumberland, England on May 7, 2019. (Photo by Owen Humphreys/PA Wire Press Association) 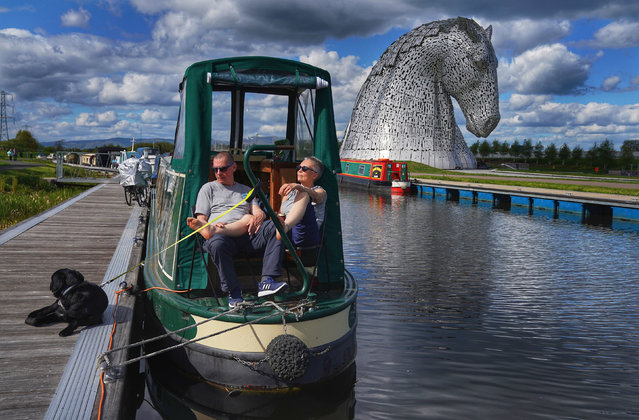 People enjoy the sun at the Kelpies, Falkirk, Scotland on May 12, 2019. (Photo by Owen Humphreys/PA Wire Press Association) 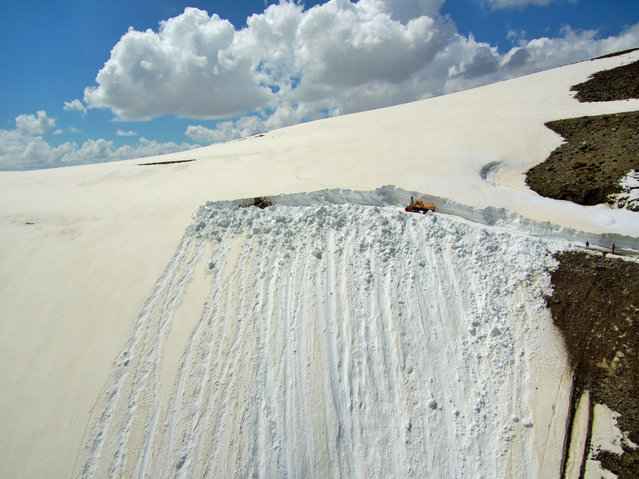 An aerial view of heavy machines cleaning out the snow-covered Cavustepe road, that was closed for 6 months due to heavy weather conditions, in Turkey's eastern Mus province on May 15, 2019. (Photo by Yahya Sezgin/Anadolu Agency/Getty Images) 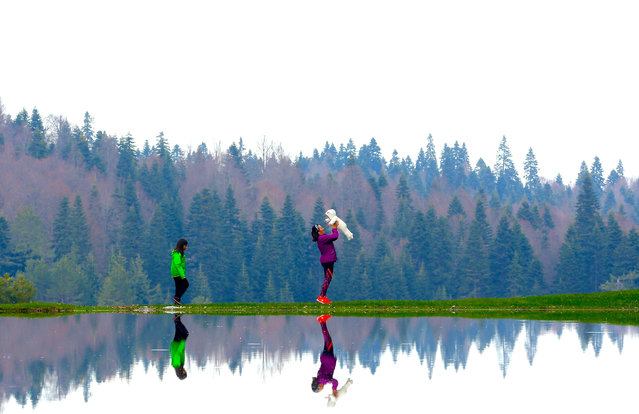 A woman plays with her babynear a lake at Guzeldere plateu in Golyaka district of Duzce, Turkey on April 29, 2019. (Photo by Omer Urer/Anadolu Agency/Getty Images) 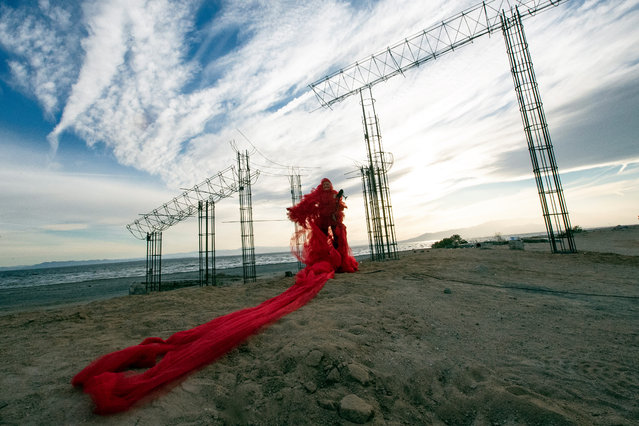 An artist performs on the shore of the Salton Sea Lake during the Bombay Beach Biennale, in Bombay Beach, south of Palm Springs, California, USA, 23 March 2019. Founded in 2015 in the partly deserted town, the Biennale art, music, and philosophy event runs for three days annually. The Bombay Beach Biennale exhibits art installations and aims at drawing attention and life to the Salton Sea area, once a flourishing area. (Photo by Etienne Laurent/EPA/EFE) 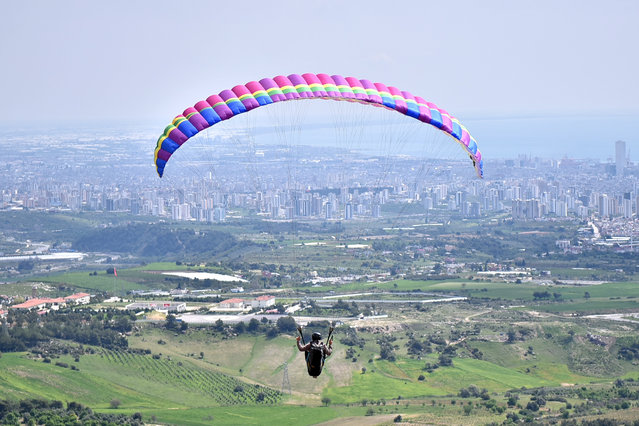 A parachutist flies over after taking off from Gelincik hill in Mersin, Turkey on April 8, 2019. Gelincik hill is the new frequent destination for parachutists. (Photo by Serkan Avci/Anadolu Agency/Getty Images) 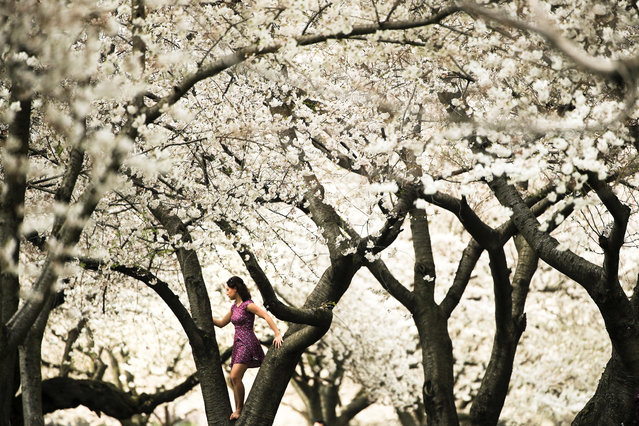 A woman climbs on the bough of a tree blooming with flowers on a spring afternoon along Kelly Drive in Philadelphia, Monday, April 8, 2019. (Photo by Matt Rourke/AP Photo) 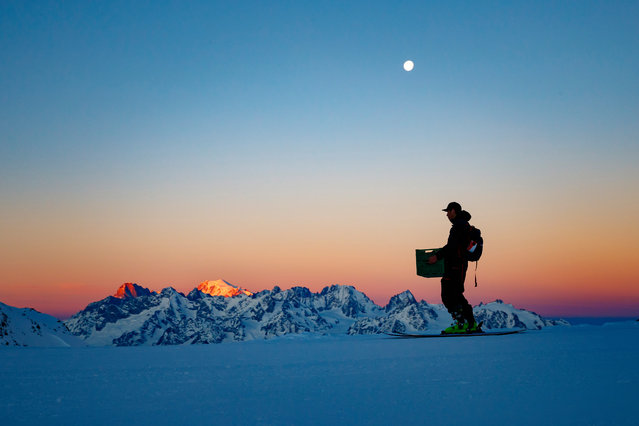