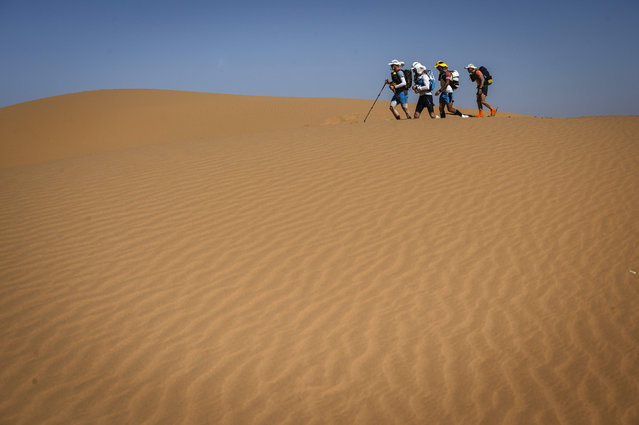 People compete in the stage 2 of the 34th edition of the Marathon des Sables between Tisserdimine and Kourci Dial Zaid in the southern Moroccan Sahara desert, on April 8, 2019. The 34th edition of the marathon is a live stage 250 kilometres race through a formidable landscape in one of the world's most inhospitable climates. (Photo by Jean-Philippe Ksiazek/AFP Photo) 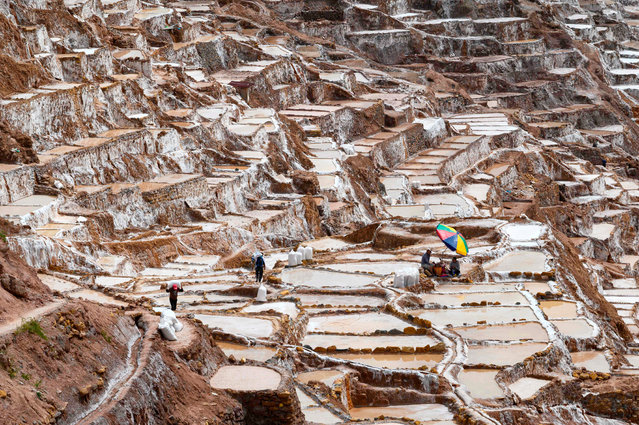 People work at the Maras salt-evaporation ponds, 48 km northeast of Cusco, Peru, on April 29, 2019. Salt pools, which have been used since pre-Inca times to obtain salt for multiple uses, are one of the tourist attractions in the Cusco area. (Photo by Pablo Porciuncula Brune/AFP Photo) 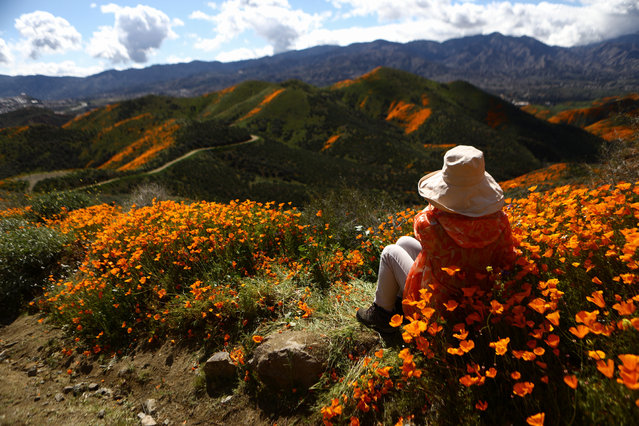 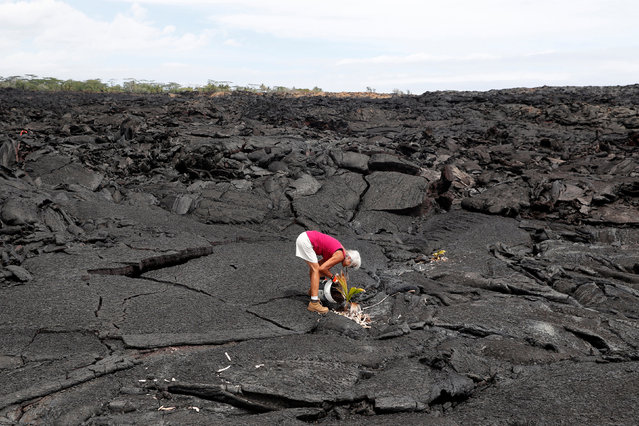 Diane Cohen, 64, who was forced to leave her home when the Kilauea Volcano erupted and covered it with lava last summer, plants a coconut tree on her property in Kapoho, in Hawaii, U.S., April 1, 2019. (Photo by Terray Sylvester/Reuters) A rice farmer works at a paddy field during spring season in Cukurca district of Hakkari, Turkey on May 8, 2019. Organic products are sold under the brand “Zap” for increasing agricultural potential of the area and contributing to the publicity of the city in Cukurca district, where sesame, produced on spring months, is turned into tahini at 400 year old historical mill. (Photo by Ali Ihsan Ozturk/Anadolu Agency/Getty Images) 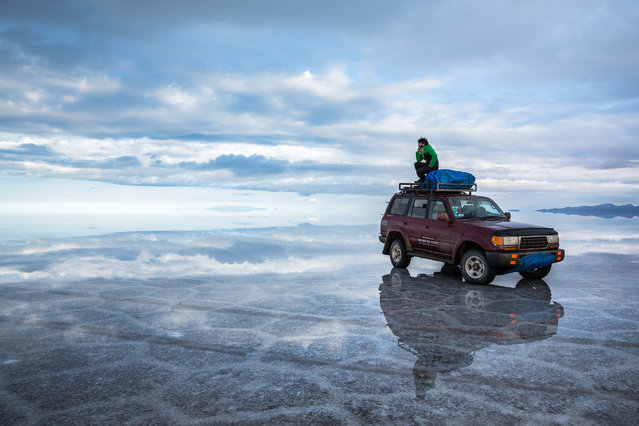 At 10,582 square kilometres, the Bolivian salt flats – otherwise known as Salar de Uyuni – are the largest on the planet and contain between 50 and 70% of the world’s lithium reserves. After exploring Chile and Argentina, photographer Joel Santos decided to travel to Bolivia in January 2017 to check the salt flats off his bucket list. With an electrical storm rolling in, Joel and his two travelling companions were the only souls left on the vast flats and captured the eerie flats without a person in sight. (Photo by Joel Santos/Barcroft Images) 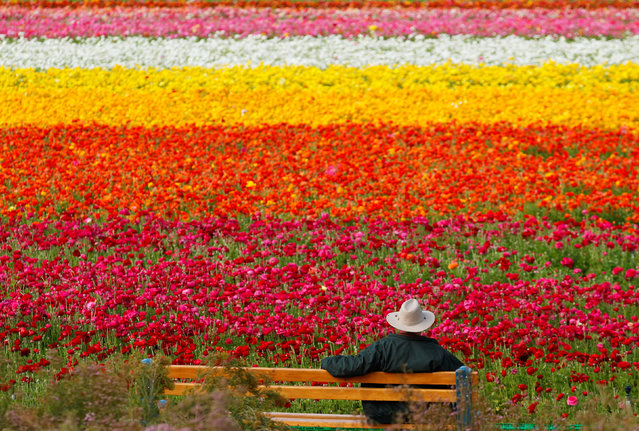 A visitor looks at the Flower Fields at Carlsbad Ranch as he enjoys nearly 50 acres of blooming giant Tecolote ranunculus flowers in Carlsbad, California, U.S., March 21, 2019. (Photo by Mike Blake/Reuters) 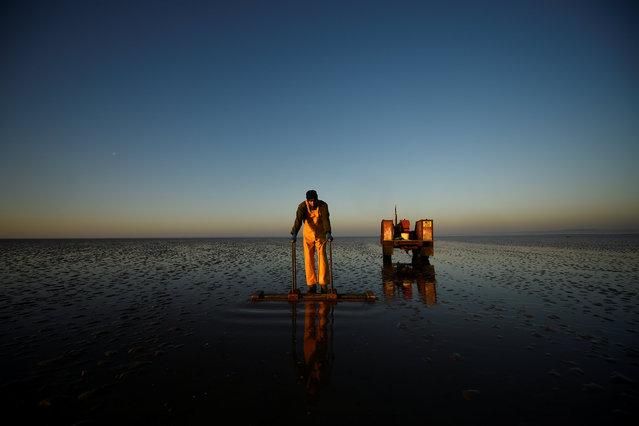 Cockle-picker and fisherman Tony McClure, 39, who voted to leave the EU uses his cockling board to raise cockles from the sands in Flookburgh, Morecambe Bay, Britain February 26, 2019. McClure: “I'm worried about exporting cockles and mussels”. (Photo by Clodagh Kilcoyne/Reuters) 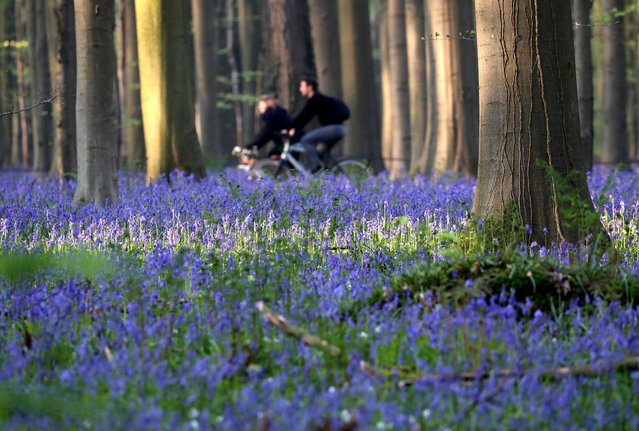 People ride bikes near wild bluebells, which bloom around mid-April, turning the forest floor blue, forming a carpet in the Hallerbos, also known as the “Blue Forest”, near Halle, Belgium on April 18, 2019. (Photo by Yves Herman/Reuters) 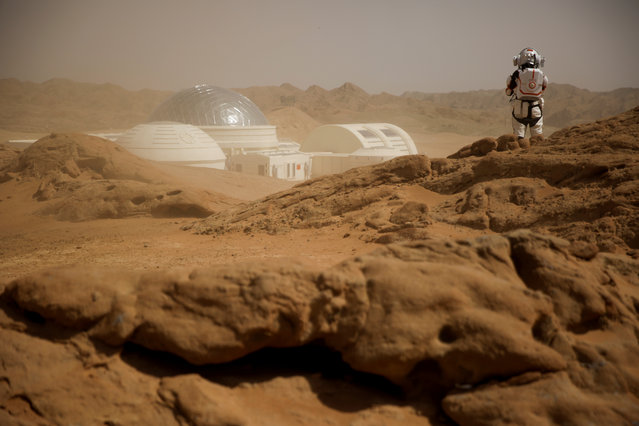 Sand whipped up by wind shrouds the C-Space Project Mars simulation base as a staff member wearing a mock space suit poses in the Gobi Desert outside Jinchang, Gansu Province, China, April 18, 2019. (Photo by Thomas Peter/Reuters) 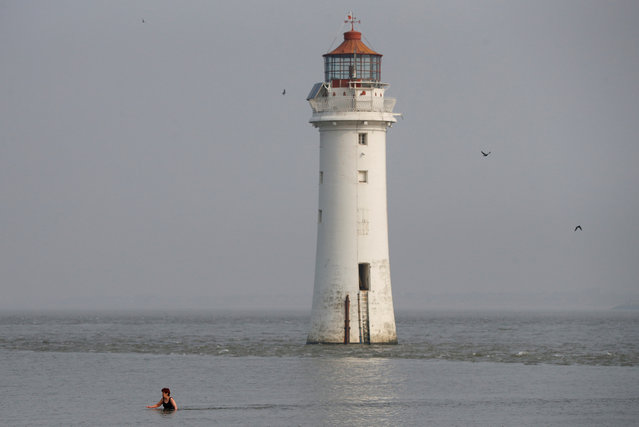 A woman swims in the sea in front of Perch Rock Lighthouse in New Brighton, Britain, April 18, 2019. (Photo by Phil Noble/Reuters) 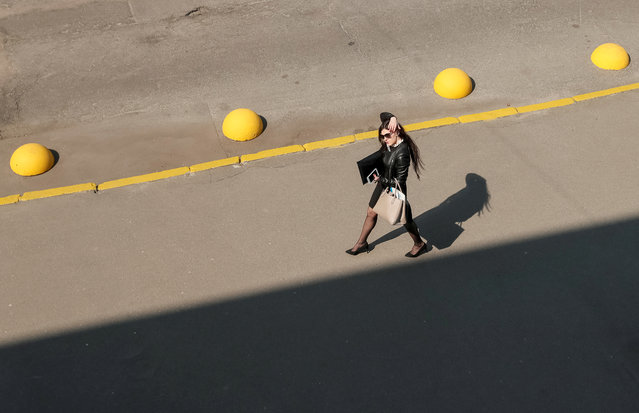 A woman walks along a street during a sunny day in central Kiev, Ukraine on April 24, 2019. (Photo by Gleb Garanich/Reuters) 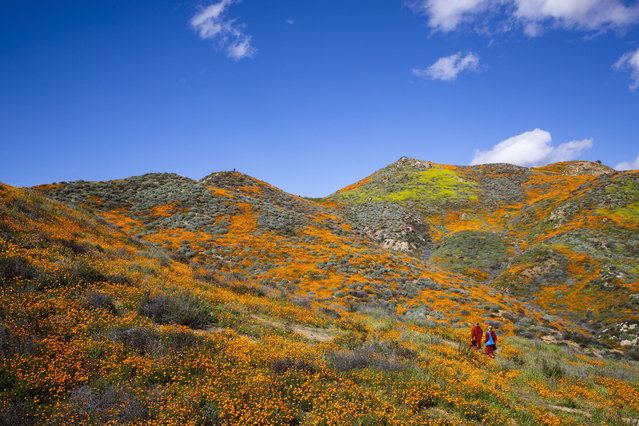 Two buddhist monks walk among the poppy fields as they are blooming on the slops of Walker Canyon near Lake Elsinore, California, USA, 08 March 2019. The heavy rains in California have boosted the growth of wild desert flowers, an occurrence called super bloom. (Photo by Etienne Laurent/EPA/EFE) 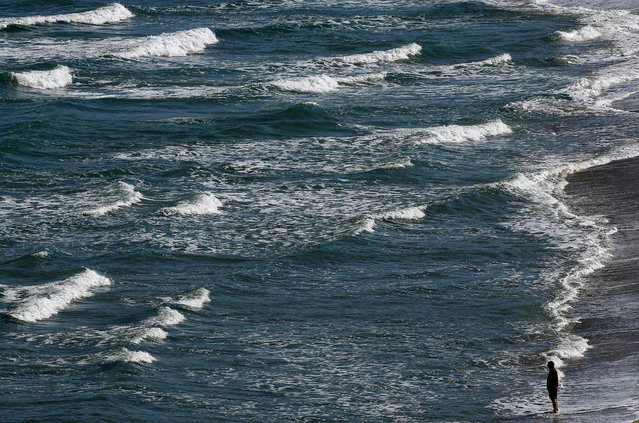 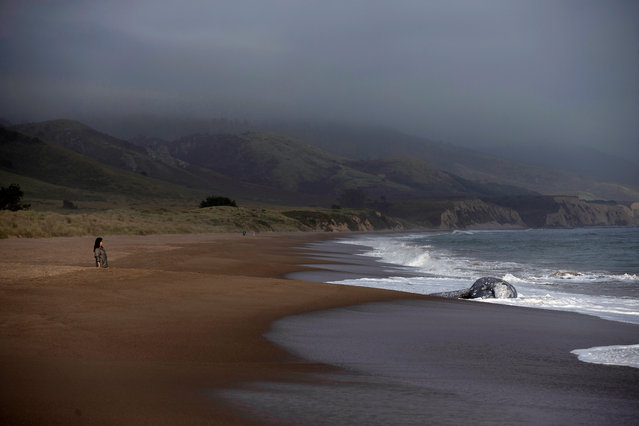 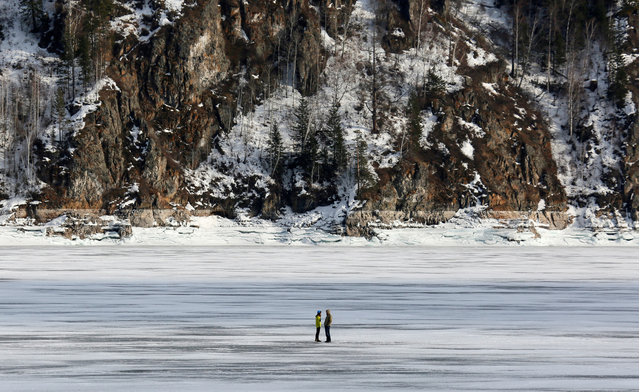 A couple talks on spring ice of the frozen Yenisei River outside Krasnoyarsk, Russia March 18, 2019. (Photo by Ilya Naymushin/Reuters) 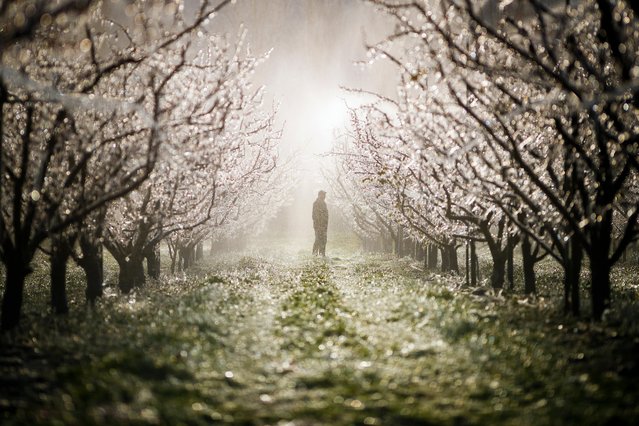 A man checks the system used to spray water in apricot orchards to protect blooming buds with a thin layer of ice, in the midst of the Swiss Alps, in Martigny, Canton of Valais, Switzerland, 05 April 2019. With an unusually low temperature forecast for the season, fruit growers try to protect their buds from frost damage with two different means, icy water or large candles. (Photo by Valentin Flauraud/EPA/EFE) 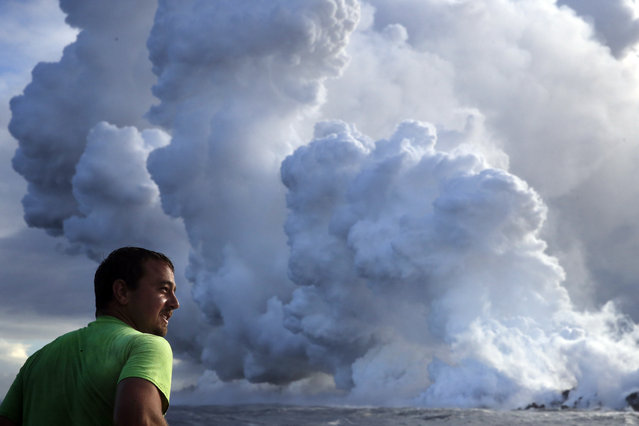 In this May 20, 2018 file photo, Joe Kekedi watches as lava enters the ocean, generating plumes of steam near Pahoa, Hawaii. A year after one of Kilauea volcano's largest and most destructive eruptions, people who lost their Big Island homes and farms to rivers of lava are still struggling to regain a sense of normalcy. More than 700 homes were destroyed in the historic eruption, and most people will never move back to their land. (Photo by Jae C. Hong/AP Photo/File) 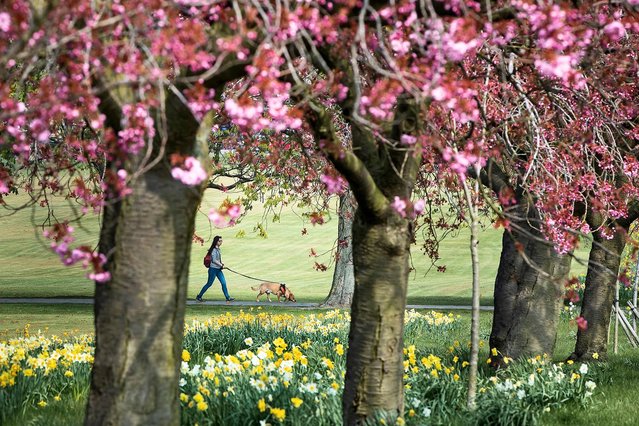 Warmer spring weather has brought out the cherry blossoms in Harrogate, Yorkshire, UK on April 17, 2019. Temperatures are expected to reach the mid-twenties over Easter. (Photo by Danny Lawson/PA Wire Press Association) 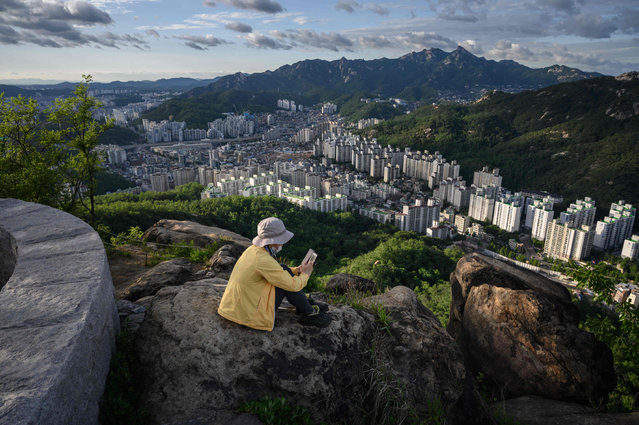