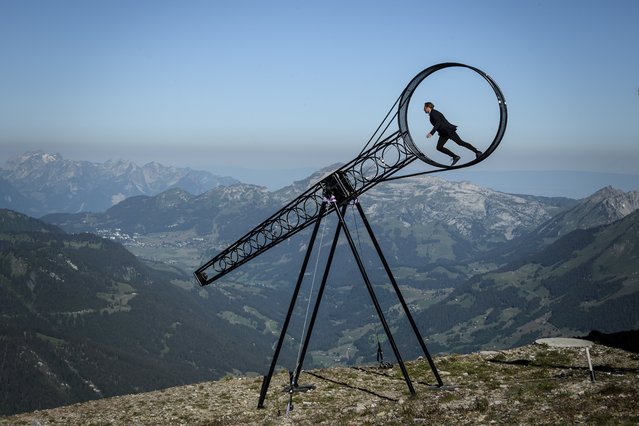 Swiss acrobat Ramon Kathriner performs with the Wheel Of The Death during the Glacier 3000 Air show an event marking the reopening of the Alpine facilities on June 23, 2020 above Les Diablerets following the lockdown due to the COVID-19 outbreak, caused by the novel coronavirus. (Photo by Fabrice Coffrini/AFP Photo) 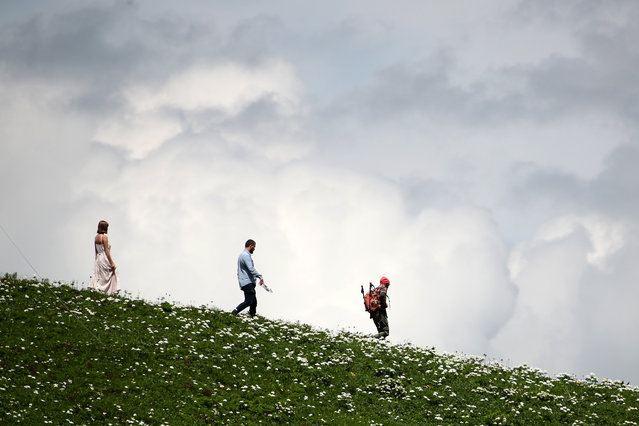 People are seen at the Krasnaya Polyana ski resort in Sochi, Russia on June 15, 2020. On June 15, the resort opened a snow park for skiers and snowboarders at the Tsirk-2 (Circus-2) mountain valley, as well as all cableways leading to the top of Mount Black Pyramid. (Photo by Dmitry Feoktistov/TASS) 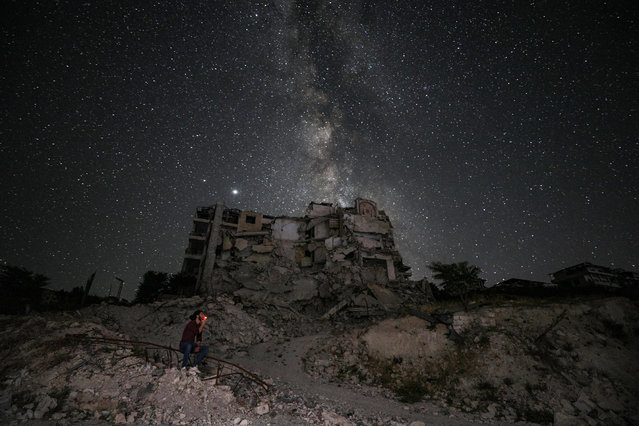 This long-exposure picture taken early on June 27, 2020 shows a man smoking past buildings destroyed by prior bombardment in the town of Ariha in Syria's rebel-held northwestern Idlib province, as the Milky Way galaxy is seen in the night sky above. (Photo by Omar Haj Kadour/AFP Photo) 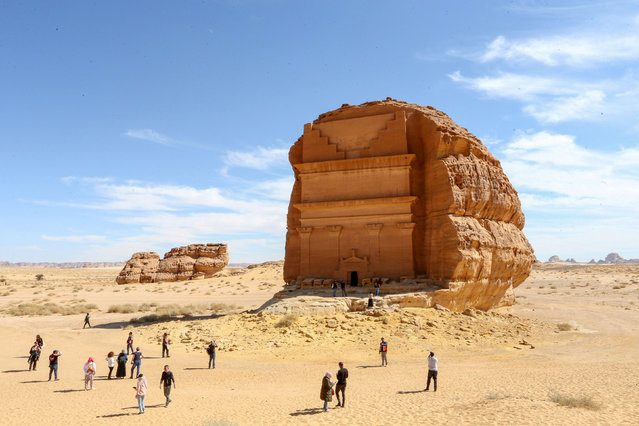 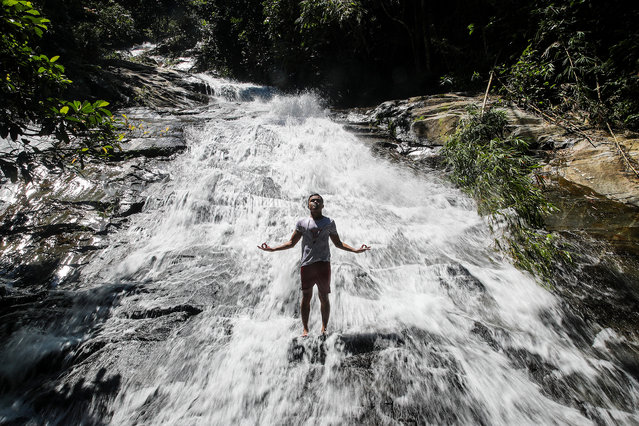 A man reacts as his partner (not seen) takes his picture at the waterfall in Hulu Langat river, outside Kuala Lumpur, Malaysia, 01 July 2020. “Recreational activities at swimming pools, rivers, lakes and in the sea will be allowed from 01 July”, according to Senior Minister for Security Ismail Sabri Yaakob on 22 June. (Photo by Fazry Ismail/EPA/EFE) 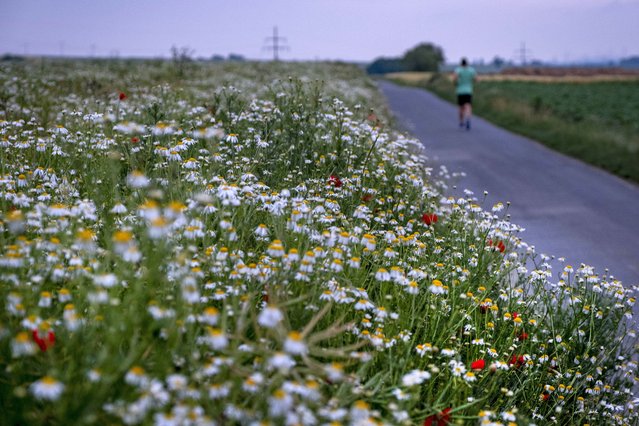 A man runs along a field of marguerites on the outskirts of Frankfurt, Germany, early Monday, June 15, 2020. (Photo by Michael Probst/AP Photo) 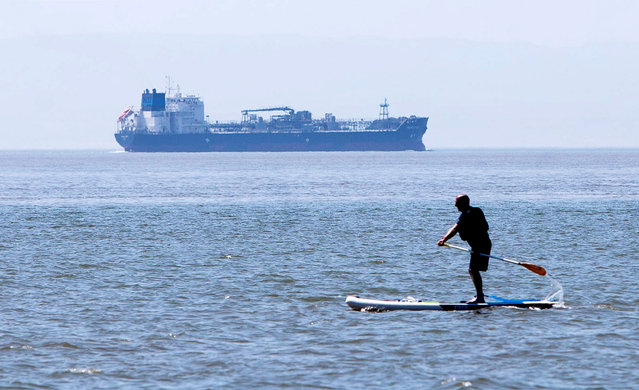 Picture shows a man paddle boarding in the shadow of a tanker ship at Barry Island, Wales on June 24, 2020 to enjoy the sunshine as temperatures rise to 30 degrees on the hottest day of the year. (Photo by Chris Fairweather/Huw Evans/Rex Features/Shutterstock) 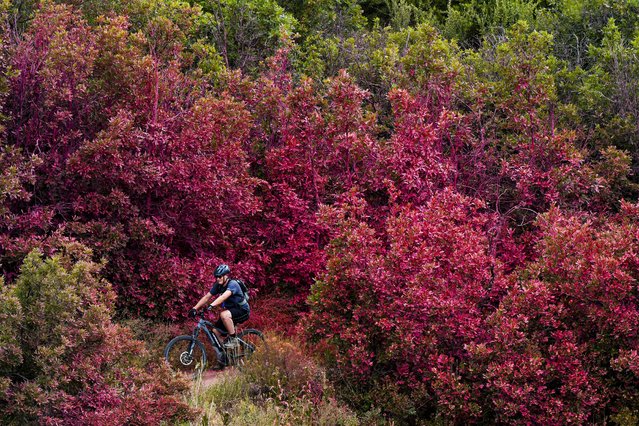 Rich Compton rides his mountain bike through an area covered in red fire retardant as crews battle the Chatridge 2 fire nearby on June 29, 2020 in Littleton, Colorado. The wildfire forced the evacuation of a nearby subdivision but firefighters were able to contain the 461-acre blaze with no structure loss or injuries. (Photo by Michael Ciaglo/Getty Images) 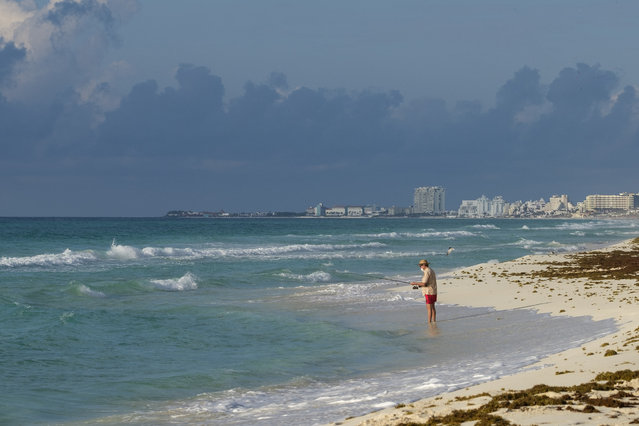 A tourist fishes from the shore in Cancun, Mexico, Thursday, June 11, 2020. An irony of the coronavirus pandemic is that the idyllic beach vacation in Mexico in the brochures really does exist now: the white sand beaches are sparkling clean and empty on the Caribbean coast. (Photo by Victor Ruiz/AP Photo) 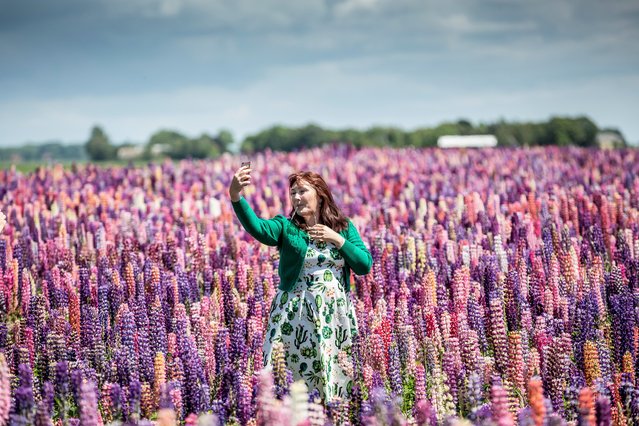 A woman takes a selfie in a field of Lupinus-plants in a remote area on the island of Lolland in Denmark, June 8 2020. A field of lupinus-plants has caught the attention of the Danes with more than 1.000 daily cars passing by or stopping near the colorfull field, according to local media. (Photo by Mads Claus Rasmussen/Ritzau Scanpix/AFP Photo) 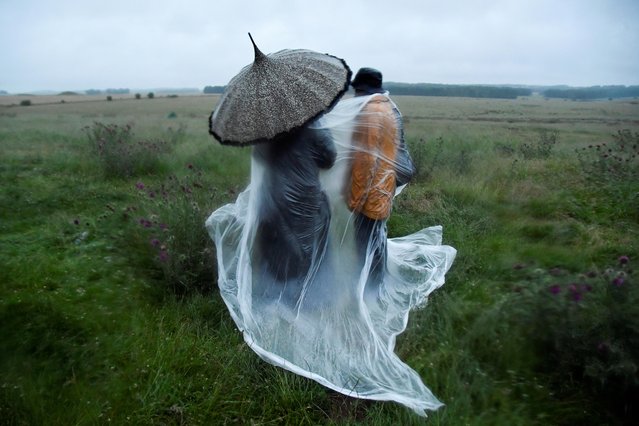 Revellers shield themselves as they celebrate in the rain near Stonehenge stone circle, despite official Summer Solstice celebrations being cancelled due to the spread of the coronavirus disease (COVID-19), near Amesbury, Britain, June 21, 2020. (Photo by Toby Melville/Reuters) 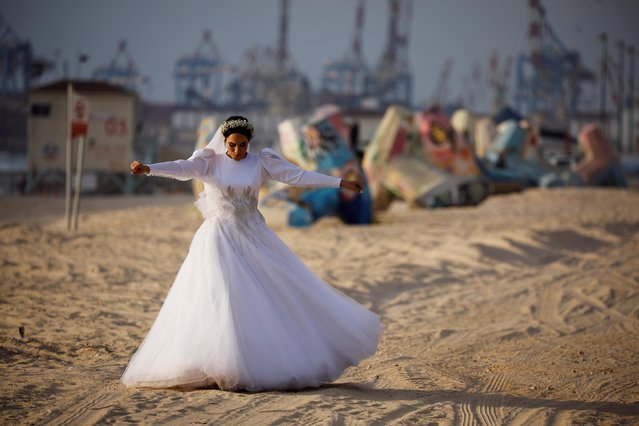 A bride walks on the shore of the Mediterranean Sea as she is photographed before her wedding amid the spread of the coronavirus disease (COVID-19), in Ashdod, Israel on July 6, 2020. (Photo by Amir Cohen/Reuters) 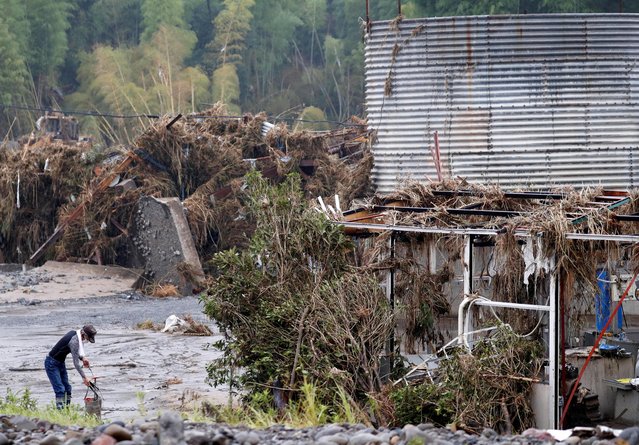 A man searches for his belongings in a damaged stone quarry where he works after floods caused by torrential rain swept through Kumamura, Kumamoto Prefecture, southwestern Japan, July 9, 2020. (Photo by Kim Kyung-Hoon/Reuters) 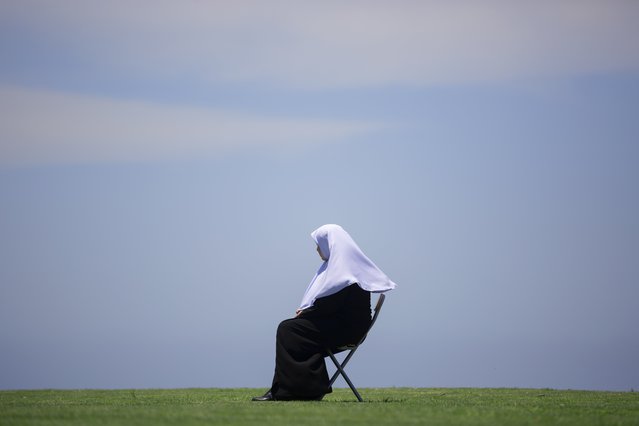 An Israeli Arab woman attends Friday prayers next to an 18th century Muslim burial ground ahed of a protest against the decision made by the Tel Aviv-Jaffa Municipality to demolish the burial ground and build shelter for homeless people, in Tel Aviv, Israel, Friday, June 12, 2020. (Photo by Oded Balilty/AP Photo) 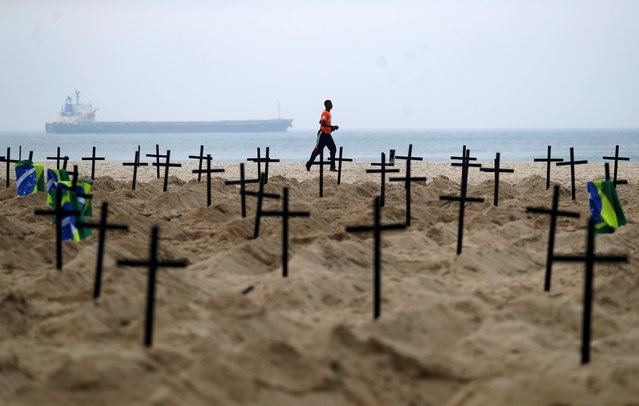 A man runs past the one hundred graves which were dug by activists of the NGO Rio de Paz on Copacabana beach symbolising the dead from the coronavirus disease (COVID-19), in Rio de Janeiro, Brazil, June 11, 2020. (Photo by Pilar Olivares/Reuters) 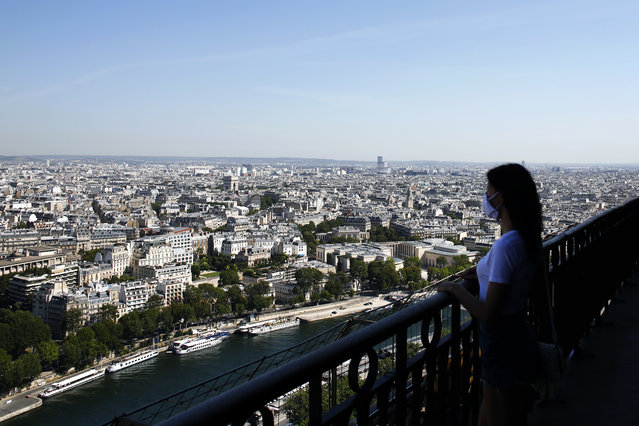 A visitor looks at the view from the Eiffel Tower, in Paris, Thursday, June 25, 2020. The Eiffel Tower reopens after the coronavirus pandemic led to the iconic Paris landmark's longest closure since World War II. (Photo by Thibault Camus/AP Photo) 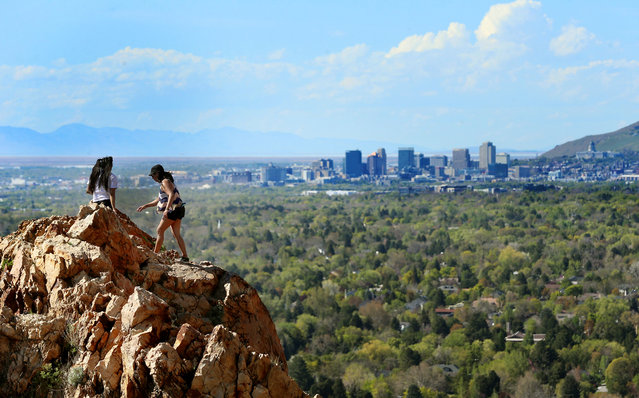 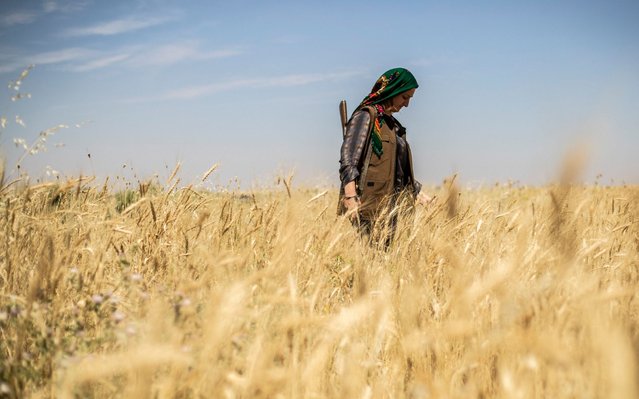 A Kurdish female volunteer, from the newly formed Community Protection Forces, guards a wheat field, against threats by jihadists to burn the crops, during harvest season on June 13, 2020, in the countryside east of Qamishli in Syria's northeastern Hasakah province. (Photo by Delil Souleiman/AFP Photo) 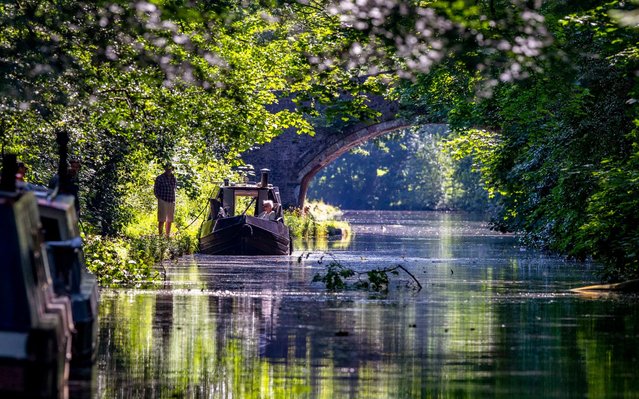 A couple enjoy the hot weather on their canal boat on Bridgewater Canal in Walton Hall, Cheshire on June 25, 2020, as Thursday could be the UK's hottest day of the year with scorching temperatures forecast to rise even further. (Photo by Peter Byrne/PA Wire/PA Images via Getty Images)
Edit Del
19 Jul 2020 00:05:00, post received 0 comments
Publication archive:
←   →
Popular tags:
All tags
Last searches: