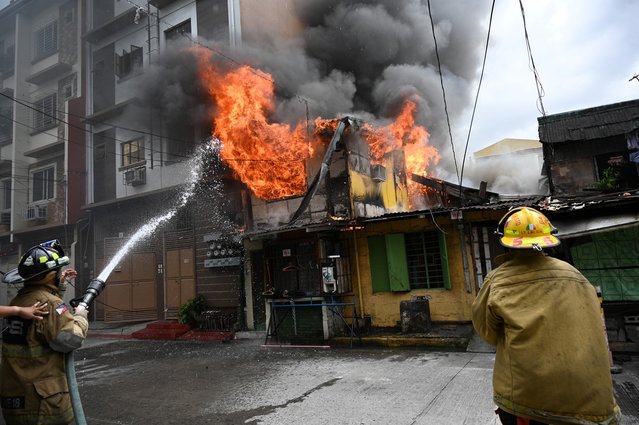 Firemen hose down a burning residence in Manila on November 1, 2019. (Photo by Ted Aljibe/AFP Photo) 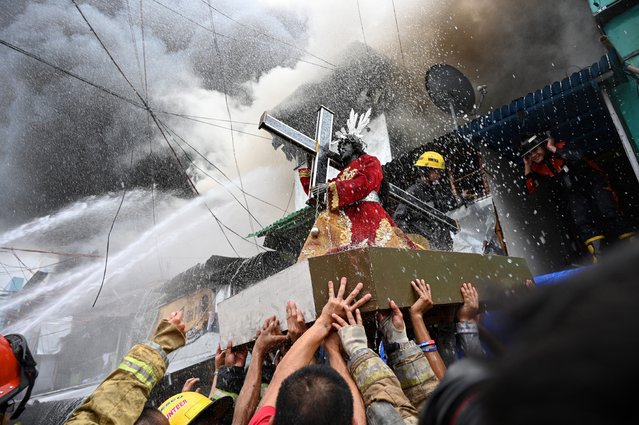 Residents and firefighters carry a Black Nazarene statue from a burning house after a fire hit an informal settlement in Manila on October 22, 2019. (Photo by Ted Aljibe/AFP Photo) 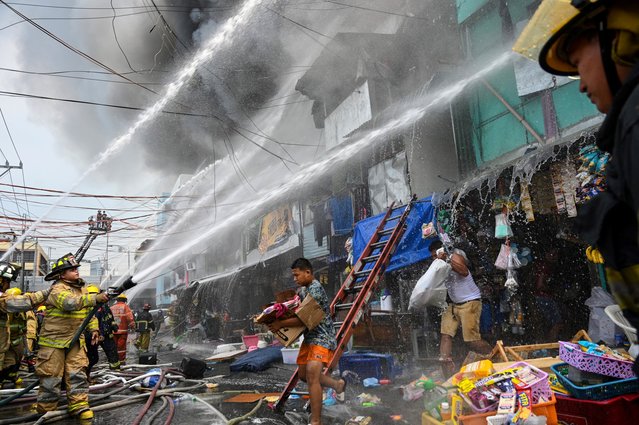 Firefighters work at the scene of a fire at an informal settlement in Manila on October 22, 2019. (Photo by Ted Aljibe/AFP Photo) 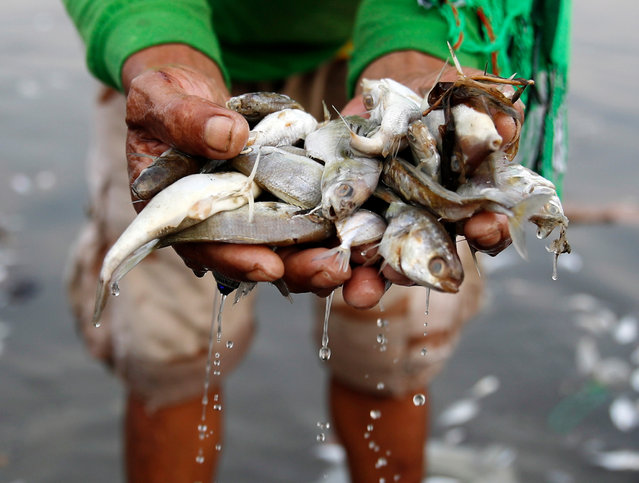 A Filipino government worker collects dead fish along the coast of Freedom Island in Paranaque City, south of Manila, Philippines, 11 October 2019. The Manila Maritime Police Station discovered a large number of different species of dead fish on the shores of Freedom island, a nature reserve south of Manila Bay. The Bureau of Fisheries and Aquatic Resources (BFAR) advised residents in the area not to take and eat the dead fish amid reports of some people collecting fish from the shore to sell and consume. (Photo by Francis R. Malasig/EPA/EFE) 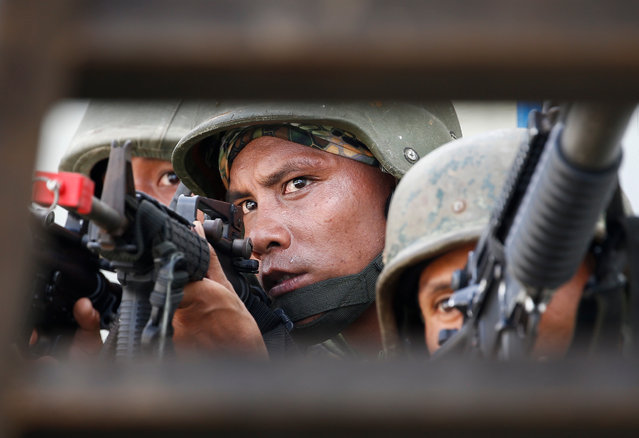 Soldiers of the Armed Forces of the Philippines aim their weapons during an assault exercise at Fort Magsaysay military camp in Nueva Ecija province, north of Manila, Philippines, 23 September 2019. Philippine military troops are holding DAGIT-PA (Sea, Air, Land) military exercises in order to enhance interoperability during joint operations of the Navy, Air Force and Army. (Photo by Rolex Dela Peña/EPA/EFE) 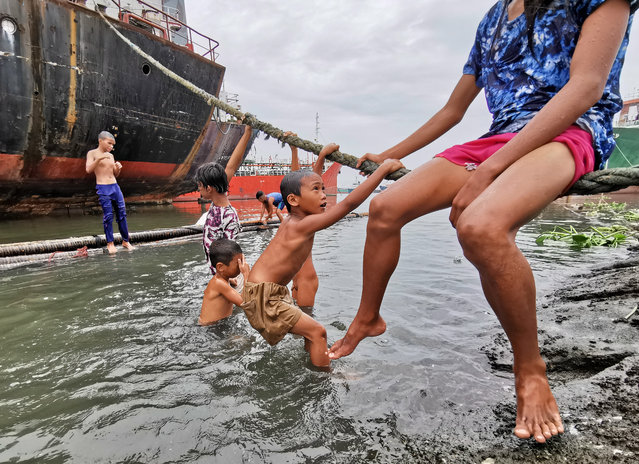 Filipino children frolic next to ships taking shelter inside a seaport in Navotas city, north of Manila, Philippines, 27 August 2019. According to the latest advisory from Philippine Atmospheric Geophysical and Astronomical Services Administration (PAGASA), Tropical Storm Podul intensified from a tropical depression into a tropical storm on August 27, while moving toward Central Luzon with a maximum winds of 65 kilometers per hour and gustiness of up to 80 km/h. (Photo by Francis R. Malasig/EPA/EFE) 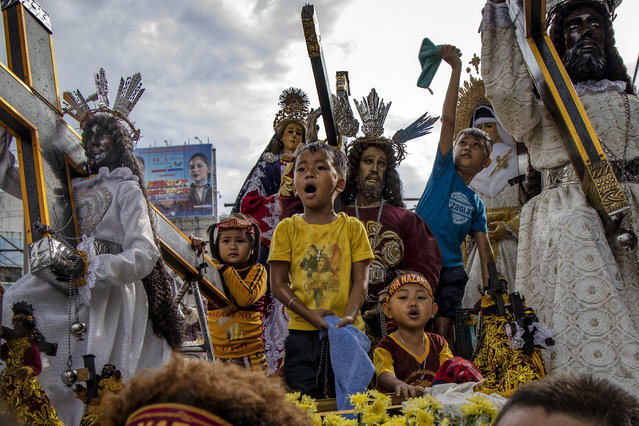 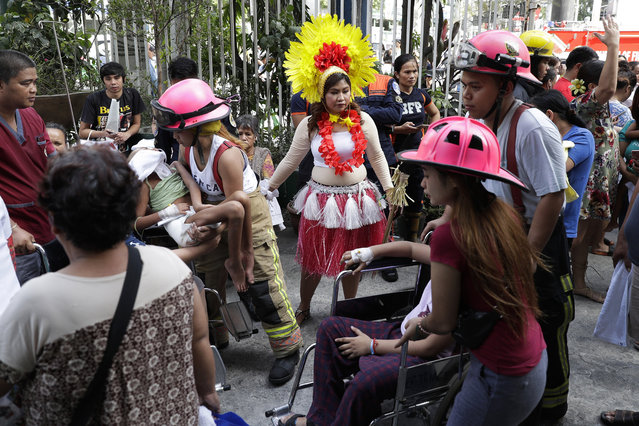 A doctor wearing a costume and fire fighters help patients and their relatives go back to the National Children's Hospital after a brief fire that sparked in one of their buildings in Quezon city, Metro Manila, Philippines, Tuesday December 17, 2019. The doctors were supposed to begin their Christmas party when they heard of the fire prompting them to immediately evacuate patients out of the hospital. Firefighters said no one was hurt and the cause of the fire is still under investigation. (Photo by Aaron Favila/AP Photo) 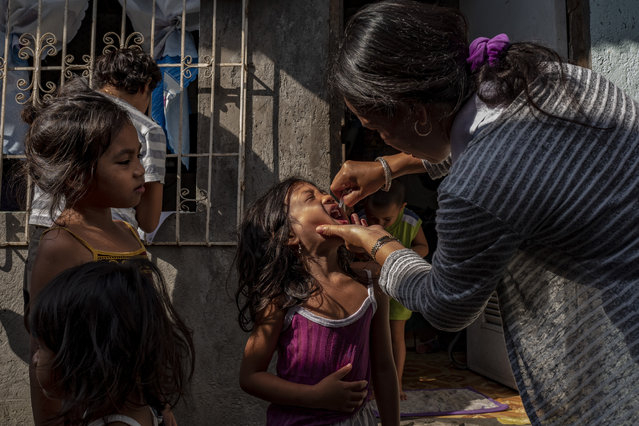 A community health worker administers an oral polio vaccine to a child, during a mass vaccination campaign to combat the resurgence of the polio virus, in a slum area on October 14, 2019 in Manila, Philippines. The Philippines is aiming to vaccinate over 9 million children after the country's health department announced an outbreak of polio, 19 years after the World Health Organization declared the country free of the infectious disease. Health Secretary Francisco Duque has blamed poor immunization coverage and lack of proper sanitation and hygiene as the cause of the resurgence of the disease. The Philippines has been struggling to regain the publics trust in vaccines since 2017, when it was discovered that a dengue vaccine manufactured by French firm Sanofi could cause health risks to people who had not previously had the disease. Recently, the country declared a dengue epidemic after hundreds have died of the mosquito-borne disease. (Photo by Ezra Acayan/Getty Images) 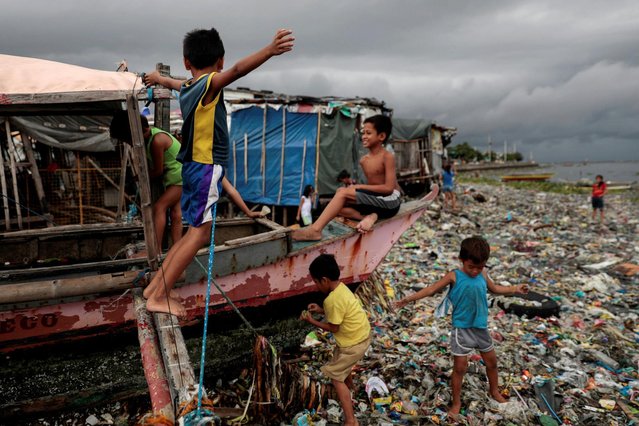 Children play on a boat docked on the garbage-filled shore of Baseco Beach in Tondo, Manila, Philippines, July 30, 2019. (Photo by Eloisa Lopez/Reuters) 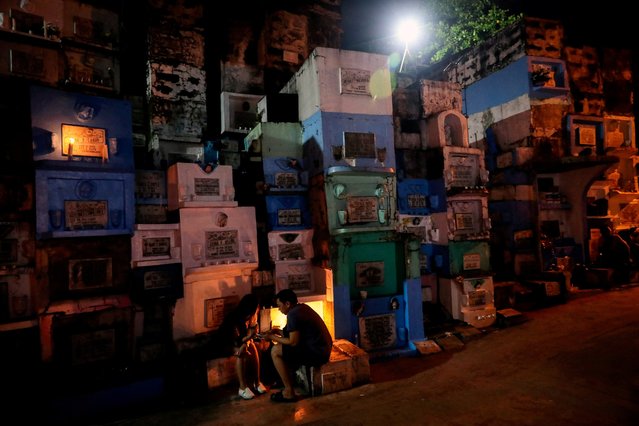 Filipinos begin to visit their departed loved ones ahead of All Saints Day in a public cemetery in Marikina, Metro Manila, Philippines, October 31, 2019. (Photo by Eloisa Lopez/Reuters) 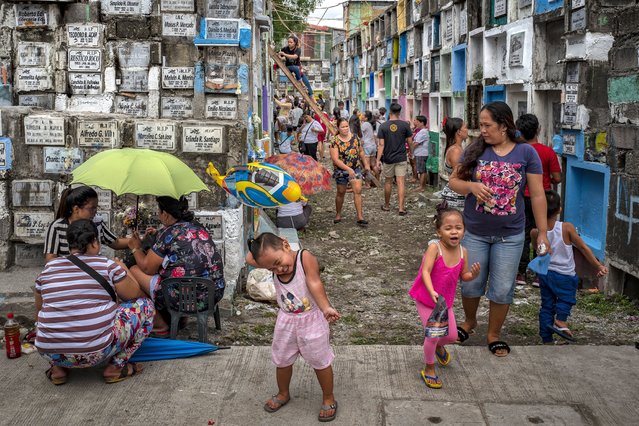 Filipinos visit the graves of their departed relatives and loved ones at a public cemetery as they mark All Saints' Day on November 1, 2019 in Manila, Philippines. Filipinos flock to cemeteries around the country to visit departed relatives and loved ones to remember All Saints' Day, a holiday celebrated in Latin cultures around the world during which family and friends of the deceased gather at the cemeteries to pray and hold vigils for those who have passed away. In the Philippines, family members clean tombs and often spend the night at the cemetery eating and celebrating with loved ones. (Photo by Ezra Acayan/Getty Images) 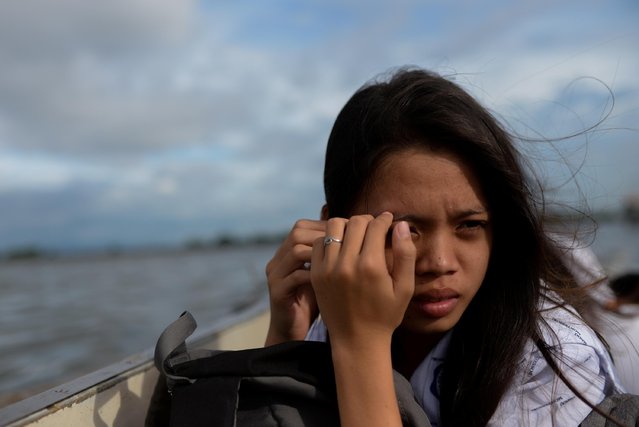 Danica Martinez, 16, shields her face away from the sun as she travels home from school by boat in Bulakan, Bulacan, north of Manila, Philippines, November 25, 2019. (Photo by Eloisa Lopez/Reuters) 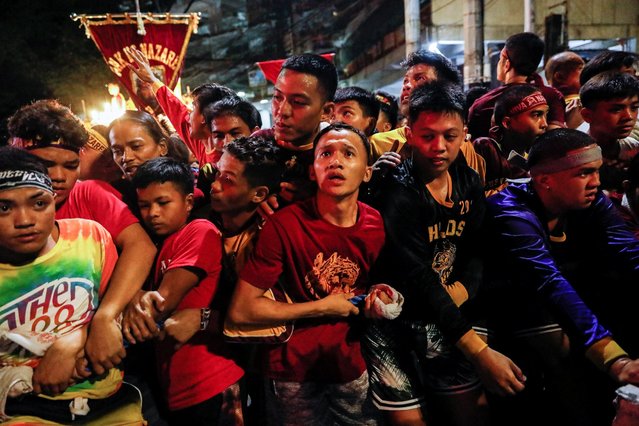 Filipino devotees attempt to get through cops surrounding the route of the Black Nazarene procession during its feast day in Manila, Philippines, January 9, 2020. (Photo by Eloisa Lopez/Reuters) 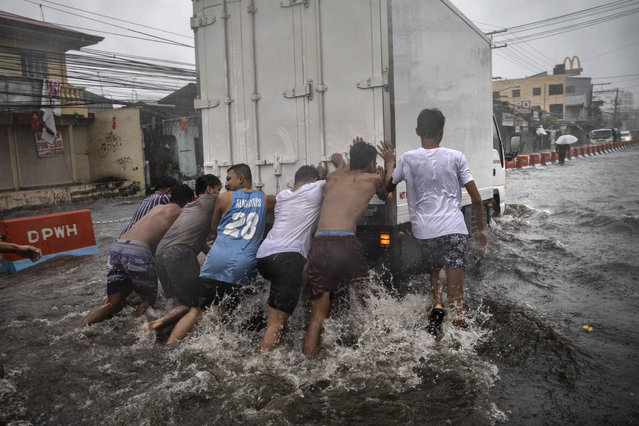 Residents help push a stalled van off a flooded highway during the onslaught of Typhoon Kammuri on December 3, 2019 in Lipa town, Batangas province, Philippines. Tens of thousands of residents have been evacuated as Typhoon Kammuri slammed into the Philippines' main island of Luzon. The powerful typhoon has forced hundreds of flights to be cancelled and has caused the Southeast Asian Games currently being held in the country to be postponed. (Photo by Ezra Acayan/Getty Images) 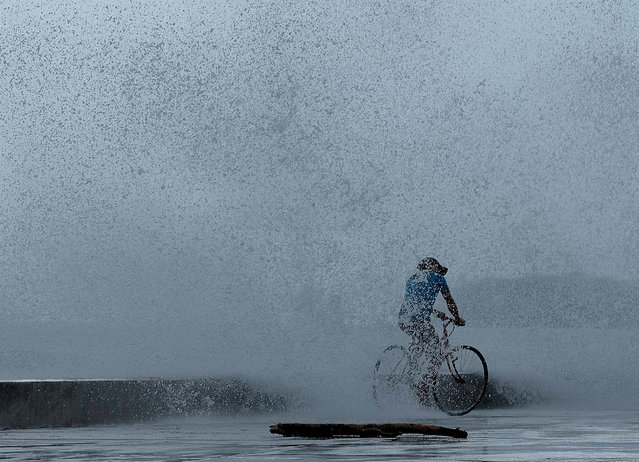 A man cycles along a dike in Legazpi city, Philippines, 03 December 2019. Typhoon Kammuri made landfall on 02 December and forced the closure of Ninoy Aquino International Airport in Manila. The typhoon also affected the ongoing Southeast Asian Games. According to the event organizers, several sporting events have been rescheduled or cancelled. (Photo by Zalrian Sayat/EPA/EFE) 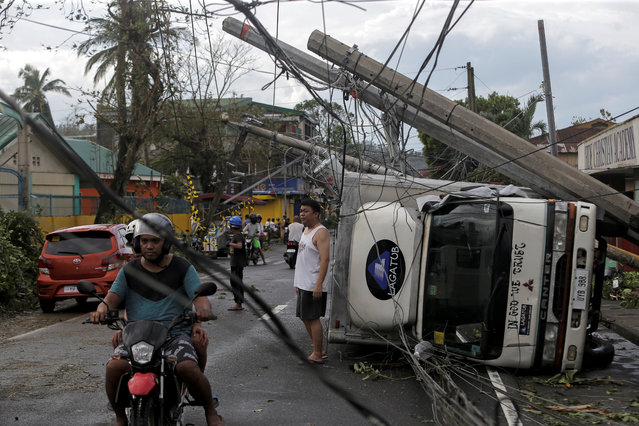 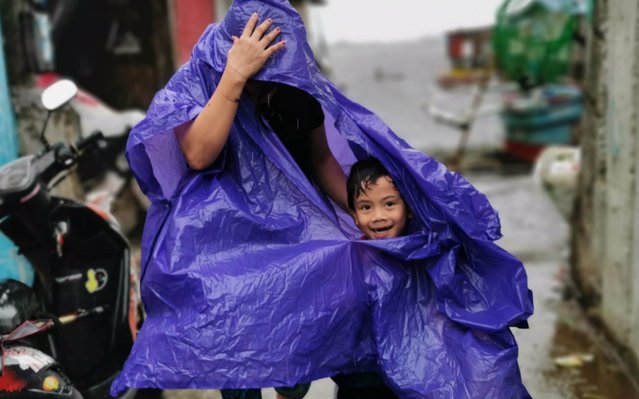 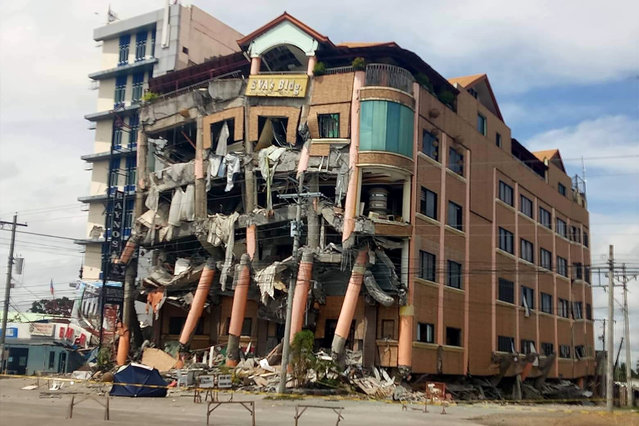