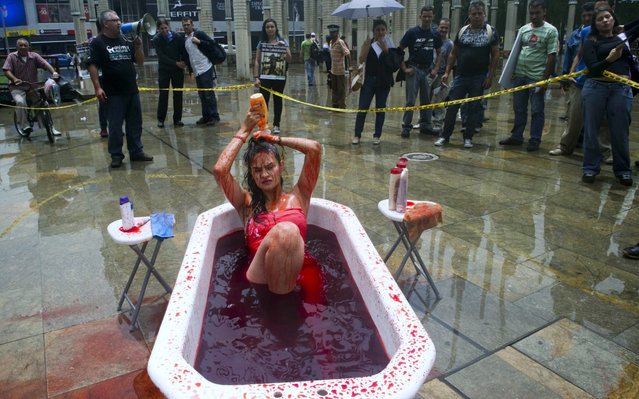 An animal rights activist washes herself with red dye to mimic blood during a protest against the testing of shampoo on animals in Barcelona. April 24, 2012. (Photo by Raul Albaledo/AFP Photo) 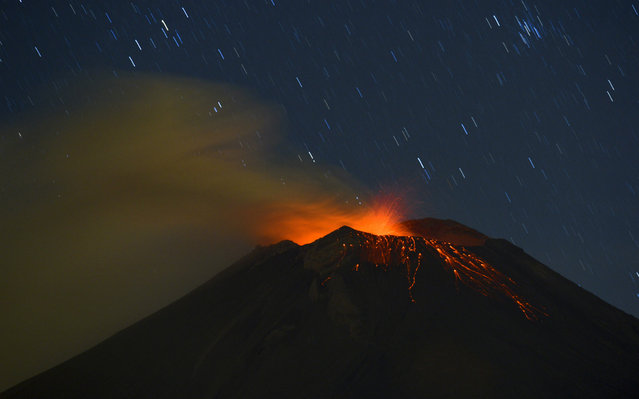 Incandescent materials, ash and smoke are spewed from the Popocatepetl Volcano as seen from Santiago Xalitzintla, in the Mexican central state of Puebla. Residents at the foot of Mexico’s Popocatepetl volcano no longer sleep soundly since the towering mountain roared back into action over a week ago, spewing out a hail of rocks, steam and ashes. The volcano, Mexico’s second highest peak at 5,452 metres, started rumbling and spurting high clouds of ash and steam on April 13, provoking the authorities to raise the alert to level five on a seven-point scale. April 25, 2012. (Photo by Ronaldo Schemidt/AFP/Getty Images) 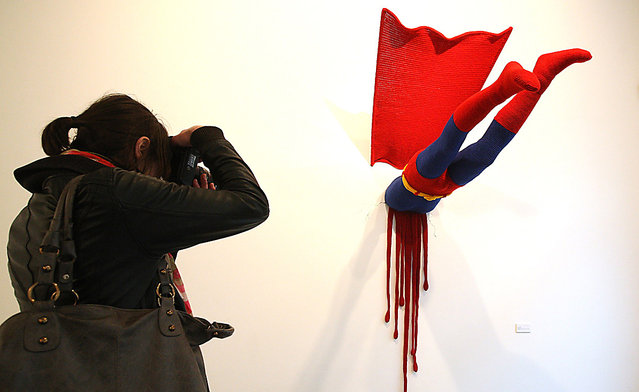 A visitor photographs the knitted sculpture “Superman” by Patricia Waller, featuring the comic book character meeting death by his own superhuman ability to fly, in the “Broken Heroes” exhibition at the Deschler Gallery in Berlin, Germany. The exhibition of hand-crocheted comic, puppet and cartoon figures shows icons of pop culture in various unfortunate states. April 26, 2012. (Photo by Adam Berry/Getty Images) 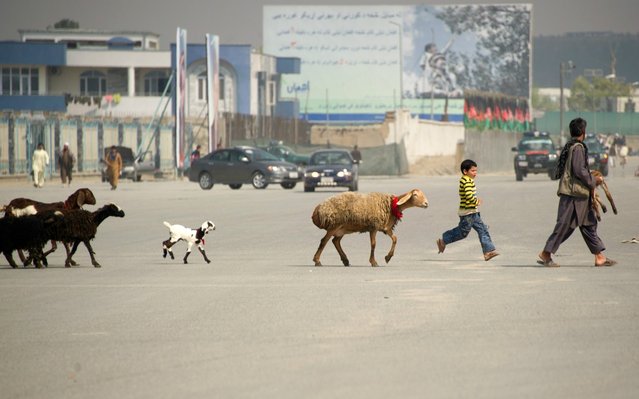 An Afghan shepherd (R) leads his flock across a street in the old city of Kabul. Poverty and an ongoing insurgency by the ousted Taliban still pose a threat to the stability of the country. April 27, 2012. (Photo by Johannes Eisele/AFP/Getty Images) 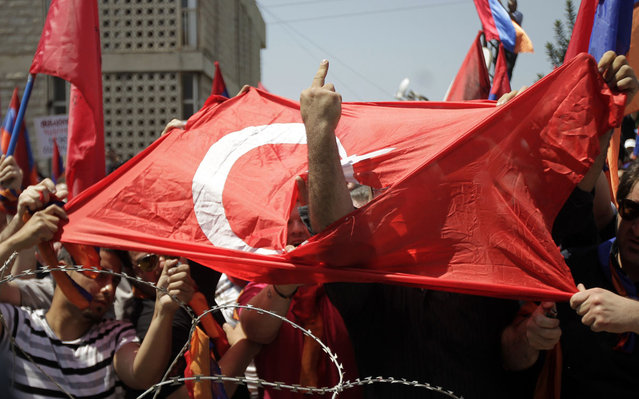 A Lebanese Armenian man gestures obscenely through a torn Turksih flag during a protest outside the Turkish embassy in Rabieh, northeast of Beirut, to commemorate the 97th anniversary of the Ottoman Turkish genocide against the Armenian people on April 24, 2012. Photo by (Joseph Eid/AFP/Getty Images) A man lights a candle at the monument to Chernobyl victims in Slavutich, some 50 kilometres (30 miles) from the accident site, and where many of the power station’s personnel used to live, during a memorial ceremony. April 26, 2012. (Photo by Sergi Supinsky/Getty Images) 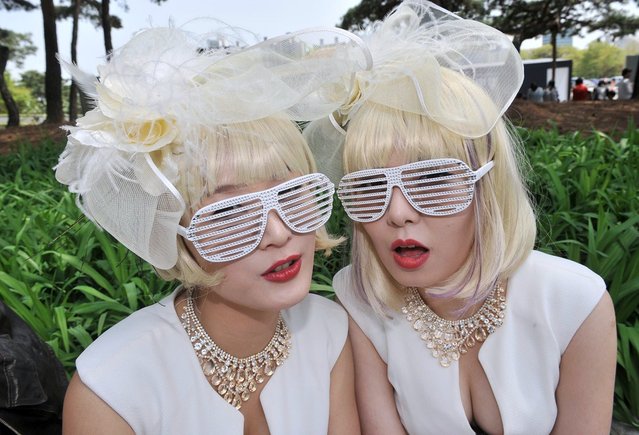 South Korean women dressed in costumes pose as they wait for a concert by US pop diva Lady Gaga outside Seoul's Olympic Stadium. Some religious groups in South Korea have opposed the concert, saying Lady Gaga has advocated homosexuality and performed in an explicitly sexual manner. April 27, 2012 (Photo by Jung Yeon-Je/AFP Photo/Getty Images) 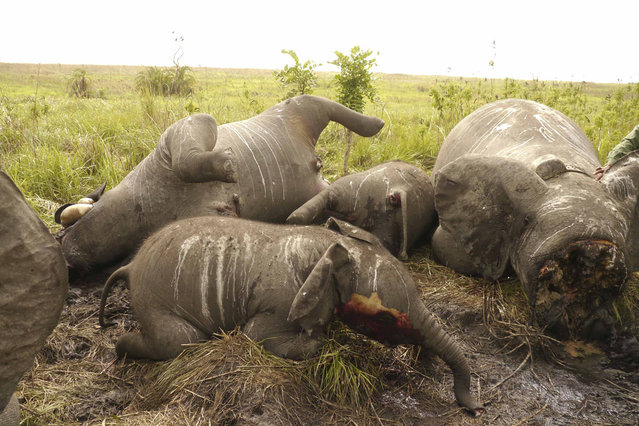 The carcasses of some of the 22 elephants slaughtered in a helicopter-bourne attack lie on the ground in the Democratic Republic of Congo’s Garamba National Park. A record number of big ivory seizures were made globally in 2011 and the trend looks set to continue in 2012 as elephant massacres take place from Congo to Cameroon, where as many as 200 of the pachyderms, listed by the International Union for Conservation of Nature as “vulnerable”, were slain in January. (Photo by DRC Military/Reuters) 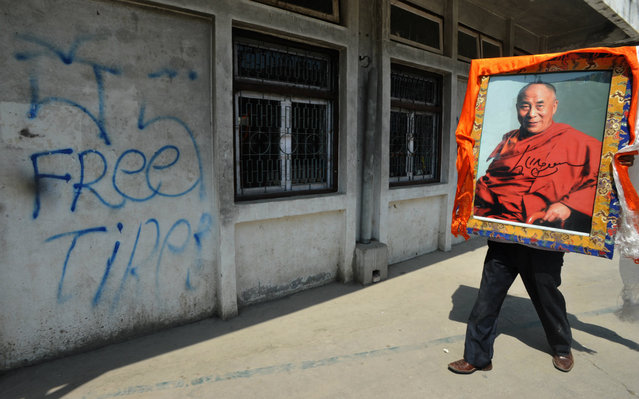 An exiled Tibetan carries a portrait of the Dalai Lama after celebrating the 23rd birthday of the Panchen Lama at the Tibetan Welfare Centre in Boudha, Kathmandu, Nepal, on April 25. Tibetans in exile have demanded the release of the Panchen Lama, who disappeared into Chinese custody in 1995 after being chosen by the Dalai Lama, Tibet's exiled spirirual leader. Chinese authorities selected another child as the Panchen Lama, widely seen as Tibetan Buddhism's second-most important spiritual leader. (Photo by Prakash Mathema/AFP – Getty Images) 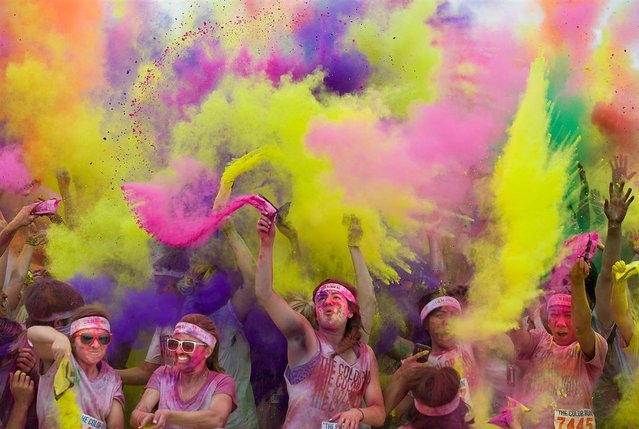 Participants are doused in colors at the finish of the Color Run, a 5-kilometer (3-mile) run at the Great Park in Irvine, Calif., April 22. Racers begin the run in white shirts and as they pass each kilometer they are doused by volunteers with a different color of “magical” dust. (Photo by Mindy Schauer/The Orange County Register via AP) The Church of Pokrov on Nerli is reflected in a pool of floodwater as frogs mate in the water in the village of Bogolyubovo, some 190 km (118 miles) east of Moscow. April 26, 2012. (Photo by Denis Sinyakov/Reuters photo) 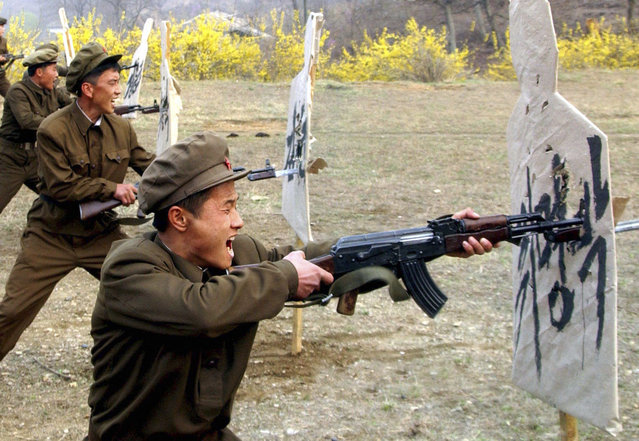 Members of the Worker-Peasant Red Guards of North Korea attend a military training in this picture released by the North’s KCNA news agency in Pyongyang. KCNA said the picture was taken on April 23, 2012. A target (R) reads, “(South Korean President) Lee Myung-bak.” (Photo by KCNA/Reuters) 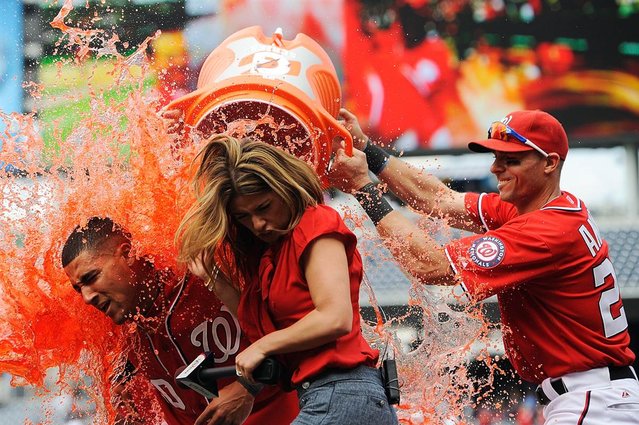 Ian Desmond, left, of the Washington Nationals is doused with Gatorade by his teammates as he is interviewed by MASN's Kristina Akra after hitting the game-winning sacrifice fly in the bottom of the 10th inning against the Miami Marlins at Nationals Park on April 21, Washington, D.C. (Photo by Patrick McDermott/Getty Images) 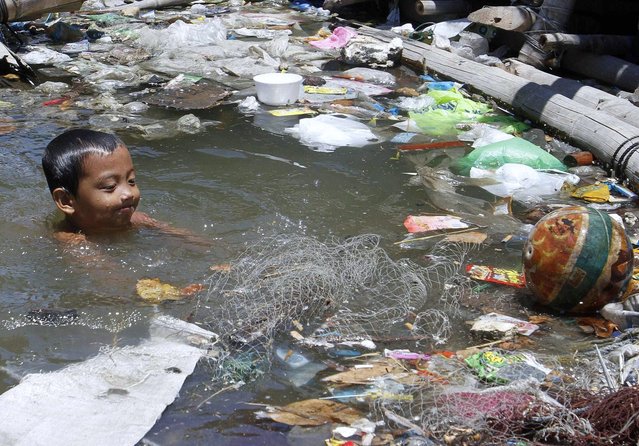 A boy swims in murky waters to cool off during a hot day outside his floating house along Manila Bay April 25, 2012. (Photo by Cheryl Ravelo/Reuters) 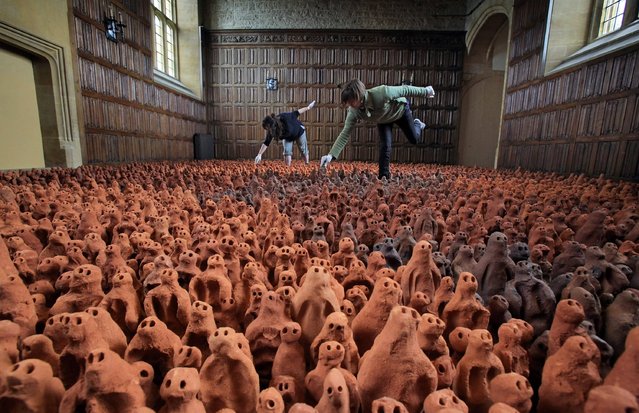 Volunteers Francis Aitken, right, and Deborah Westmancote put in place some of the thousands of clay figures that make up Antony Gormley's "Field for the British Isles" artwork, in Barrington Court, near Ilminster, England, April 25. The acclaimed work, on loan from the Arts Council Collection, consists of 40,000 clay figures. It is being exhibited in three normally empty rooms of the Barrington Court, a Tudor manor house belonging to the Britain's National Trust, an organization that preserves outdoor spaces and historic buildings in the U.K. (Photo by Matt Cardy/Getty Images) 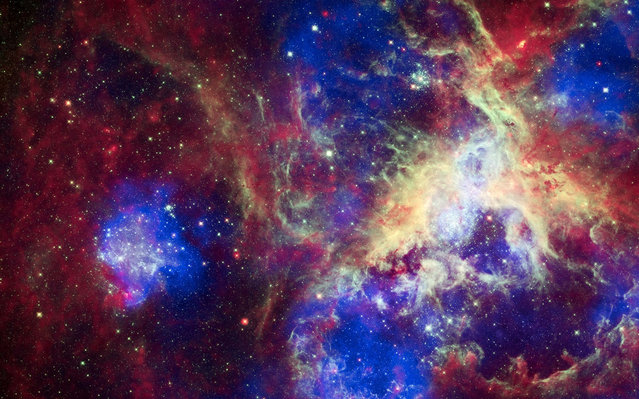 NASA has released a new three-part composite image of 30 Doradus created to celebrate the Hubble telescope’s 22nd anniversary in orbit. It combines one image each from NASA’s great observatories; Chandra, Spitzer and Hubble. 30 Doradus is a large star-creating region in our neighboring galaxy, the Large Magellanic Cloud. Smack in the middle of 30 Doradus, thousands of stars are producing radiation and intense winds. Super hot gases from these winds and explosions are detected by the Chandra X-ray Observatory–here you can see these as blue. The Hubble image is green and shows the light of these huge stars and stages of star births. The Spitzer image can be seen in red, and shows cooler gas and dust formed by the powerful winds at the center. (Photo by NASA)
Edit Del
28 Apr 2012 12:28:00, post received 0 comments
Publication archive:
←   →
Popular tags:
All tags
Last searches: