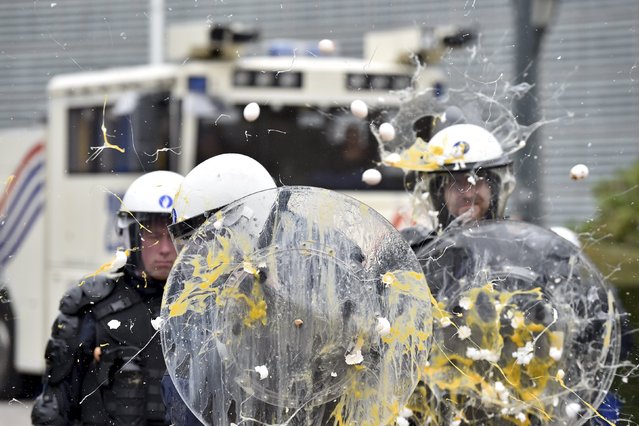 Policemen get hit by eggs as farmers and dairy farmers from all over Europe take part in a demonstration outside a European Union farm ministers' emergency meeting at the EU Council headquarters in Brussels, Belgium September 7, 2015. (Photo by Eric Vidal/Reuters) 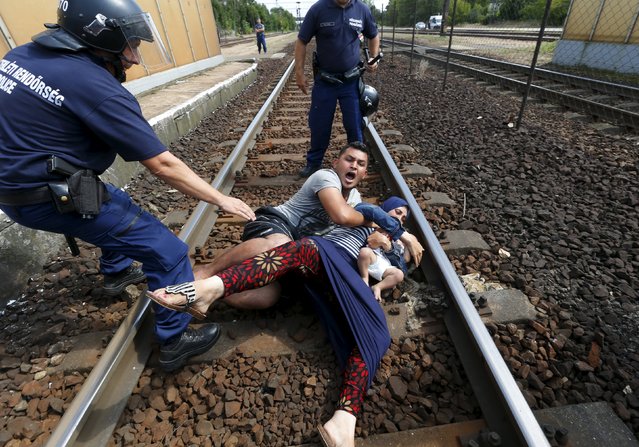 Hungarian policemen stand by the family of migrants as they want to run away at the railway station in the town of Bicske, Hungary, September 3, 2015. (Photo by Laszlo Balogh/Reuters) 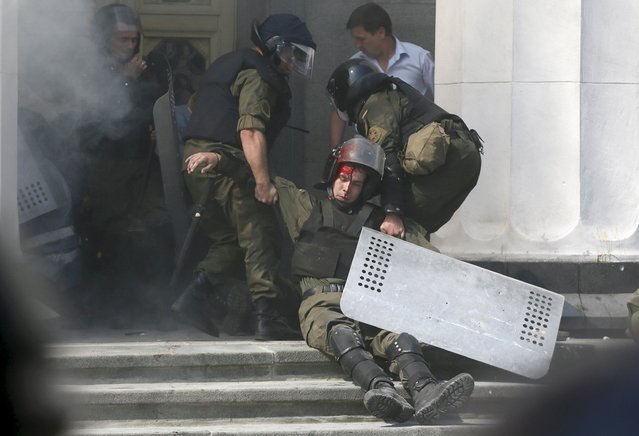 An injured national guard officer is carried away by comrades outside the parliament building in Kiev, Ukraine, August 31, 2015. (Photo by Valentyn Ogirenko/Reuters) 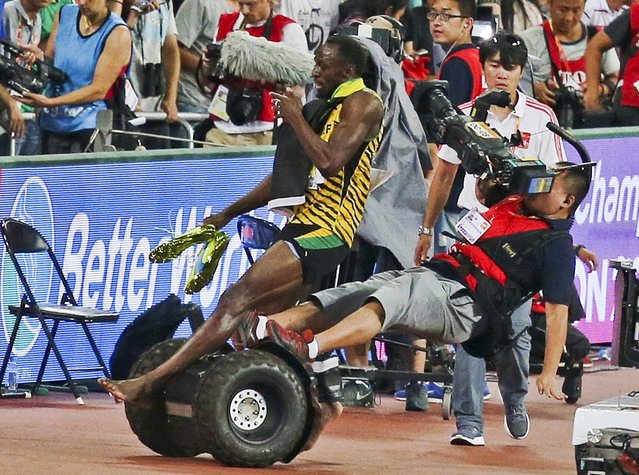 Usain Bolt of Jamaica is hit by a cameraman on a Segway as he celebrates after winning the men's 200 metres final at the 15th IAAF World Championships at the National Stadium in Beijing, China, August 27, 2015. (Photo by Reuters/Stringer) 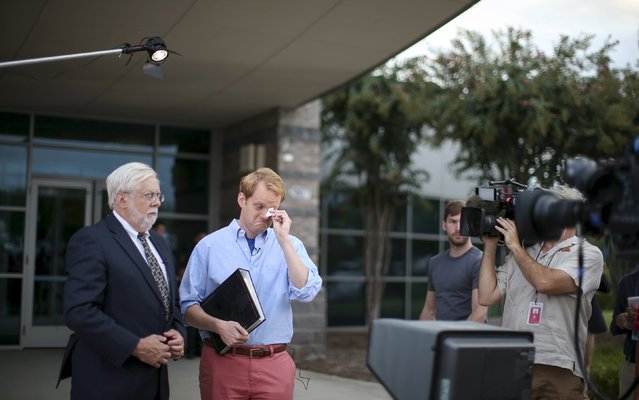 Chris Hurst (R), a journalist at the station and boyfriend of slain journalist Alison Parker, pauses for a moment as Jeff Marks (L), general manager for WDBJ7, looks on while they speak with NBC's Today Show outside of the offices for WDBJ7, where slain journalists Parker and Adam Ward worked in Roanoke, Virginia, United States August 27, 2015. (Photo by Chris Keane/Reuters) 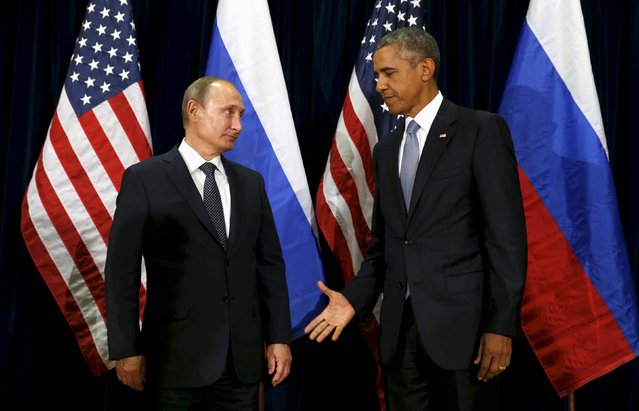 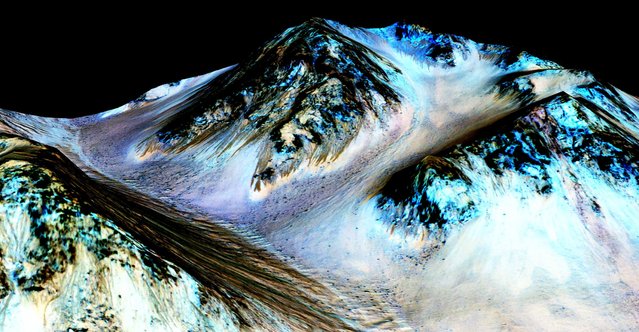 Dark, narrow, 100 meter-long streaks on Mars inferred to have been formed by contemporary flowing water are seen in an image produced by NASA, the Jet Propulsion Laboratory (JPL) and the University of Arizona. Scientists have found the first evidence that briny water may flow on the surface of Mars during the planet's summer months, a paper published on Monday showed. (Photo by Reuters/NASA/JPL/University of Arizona) 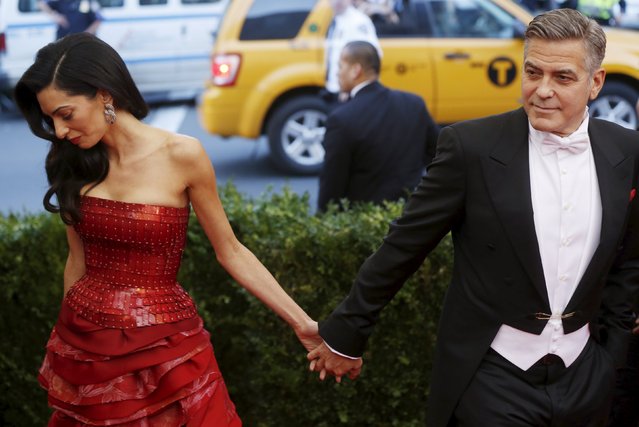 George Clooney and wife Amal Clooney pictured at the Metropolitan Museum of Art Costume Institute Gala 2015 in Manhattan, May 4, 2015. (Photo by Lucas Jackson/Reuters) 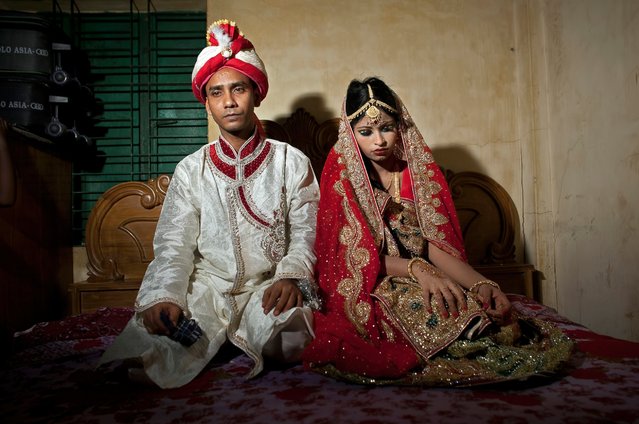 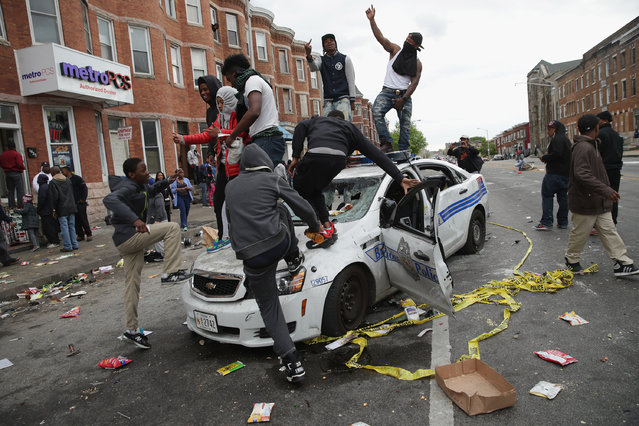 Demonstrators climb on a destroyed Baltimore Police car in the street near the corner of Pennsylvania and North avenues during violent protests following the funeral of Freddie Gray April 27, 2015 in Baltimore, Maryland. Gray, 25, who was arrested for possessing a switch blade knife April 12 outside the Gilmor Homes housing project on Baltimore's west side. According to his attorney, Gray died a week later in the hospital from a severe spinal cord injury he received while in police custody. (Photo by Chip Somodevilla/Getty Images) 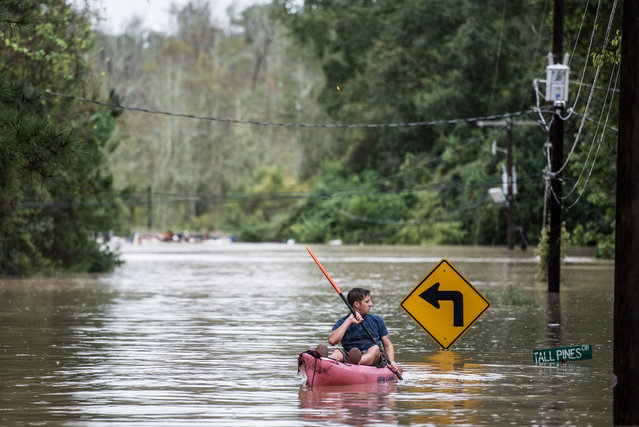 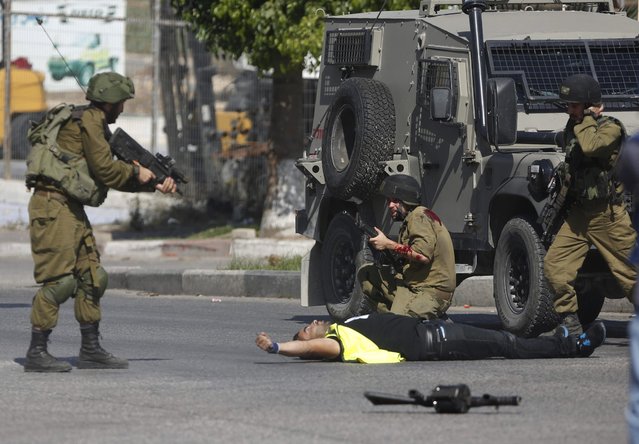 An Israeli soldier shoots a Palestinian holding a knife after he stabbed another Israeli soldier, seen kneeling, during clashes in Hebron, West Bank, October 16, 2015. The Palestinian man wearing a yellow “press” vest and a T-shirt identifying him as journalist stabbed and wounded the soldier in the latest in a monthlong spate of attacks. (Photo by Nasser Shiyoukhi/AP Photo) 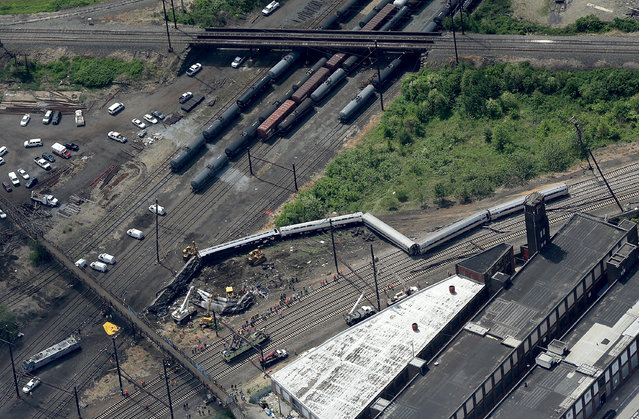 Investigators and first responders work near the wreckage of Amtrak Northeast Regional Train 188, from Washington to New York, that derailed yesterday May 13, 2015 in north Philadelphia, Pennsylvania. At least six people were killed and more than 200 others were injured in the crash. (Photo by Win McNamee/Getty Images) 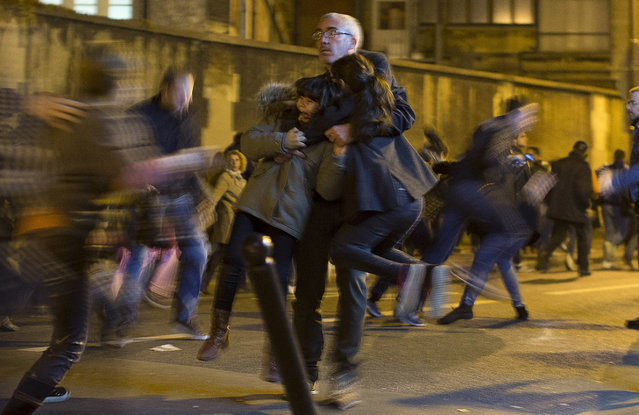 A man carries two children after panic broke out among mourners who payed their respect at the attack sites at restaurant Le Petit Cambodge (Little Cambodia) and the Carillon Hotel in Paris, November 15, 2015. Thousands of French troops deployed around Paris on Sunday and tourist sites stood shuttered in one of the most visited cities on Earth while investigators questioned the relatives of a suspected suicide bomber involved in the country's deadliest violence since World War II. (Photo by Peter Dejong/AP Photo) 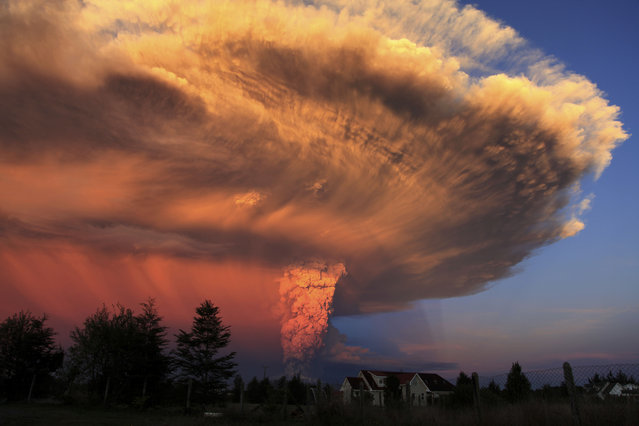 The Calbuco volcano erupts near Puerto Varas, Chile, Wednesday, April 22, 2015. The volcano erupted for the first time in more than 42 years, billowing a huge ash cloud over a sparsely populated, mountainous area in southern Chile. (Phoot by Diego Main/AP Photo) 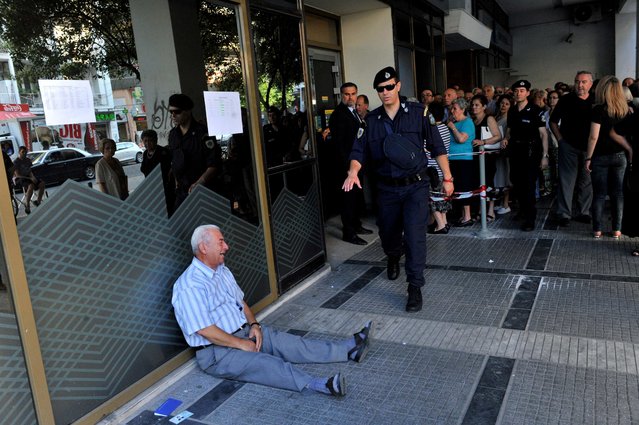 An elderly man is crying outside a national bank branch as pensioners queue to get their pensions, with a limit of 120 euros, in Thessaloniki, Greece, July 3, 2015. Greece is almost evenly split over a crucial weekend referendum that could decide its financial fate, with a “Yes” result possibly ahead by a whisker, the latest survey showed. (Photo by Sakis Mitrolidis/AFP Photo) 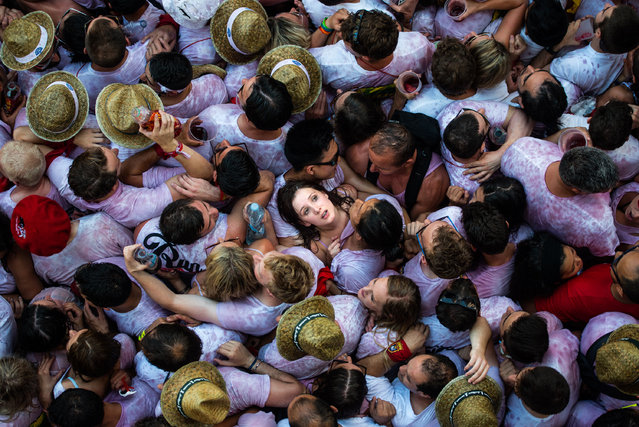 Revellers enjoy the atmosphere during the opening day or “Chupinazo” of the San Fermin Running of the Bulls fiesta on July 6, 2015 in Pamplona, Spain. The annual Fiesta de San Fermin, made famous by the 1926 novel of US writer Ernest Hemmingway entitled “The Sun Also Rises”, involves the daily running of the bulls through the historic heart of Pamplona to the bull ring. (Photo by David Ramos/Getty Images) 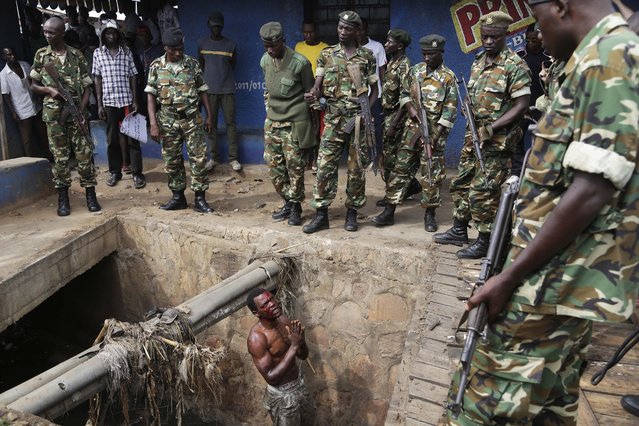 Jean Claude Niyonzima, a suspected member of the ruling party's youth militia, pleads with soldiers to protect him from a mob of demonstrators after he came out of hiding in a sewer in Bujumbura, Burundi, May 7, 2015. (Photo by Jerome Delay/AP Photo) 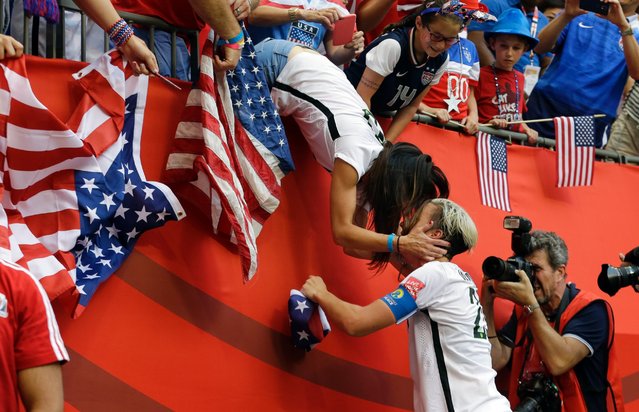 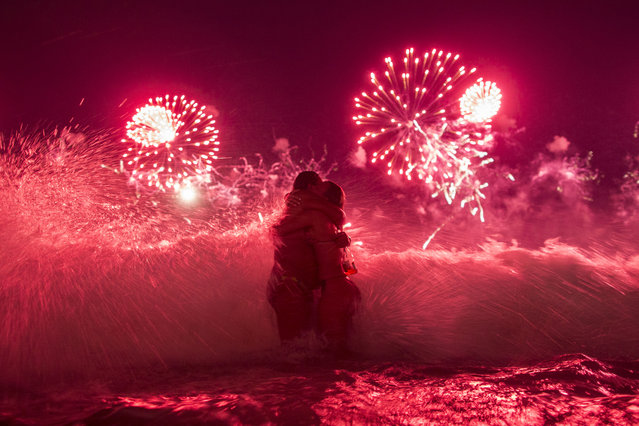 A wave crashes on two girls hugging as they usher in the new year, while fireworks explode over Copacabana beach, during New Year celebrations in Rio de Janeiro, Brazil, Thursday, January 1, 2015. (Photo by Felipe Dana/AP Photo) 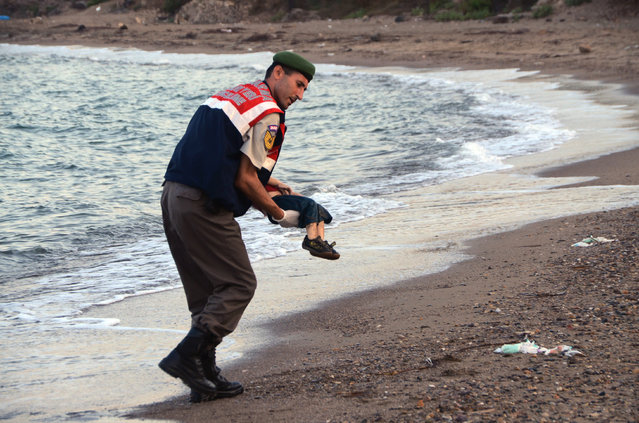 A paramilitary police officer carries the lifeless body of Aylan Kurdi, 3, after a number of migrants died and a smaller number were reported missing after boats carrying them to the Greek island of Kos capsized, near the Turkish resort of Bodrum early Wednesday, September 2, 2015. The family — Abdullah, his wife Rehan and their two boys, 3-year-old Aylan and 5-year-old Galip – embarked on the perilous boat journey only after their bid to move to Canada was rejected. The tides also washed up the bodies of Rehan and Galip on Turkey's Bodrum peninsula Wednesday, Abdullah survived the tragedy. (Photo by AP Photo/DHA) 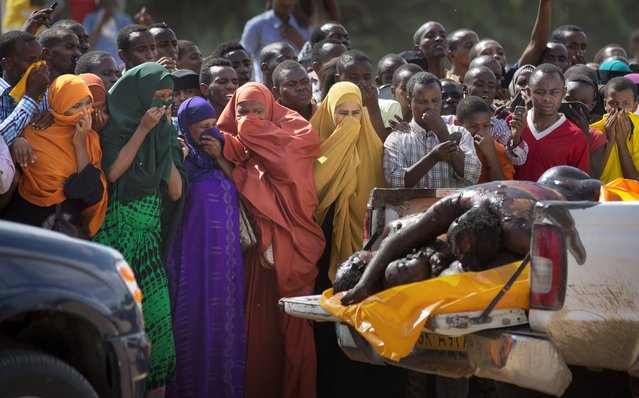 Women in the crowd cover their faces to protect against the smell as authorities display the bodies of the alleged attackers before about 2,000 people in a large open area in central Garissa, Kenya Saturday, April 4, 2015. (Photo by Ben Curtis/AP Photo) 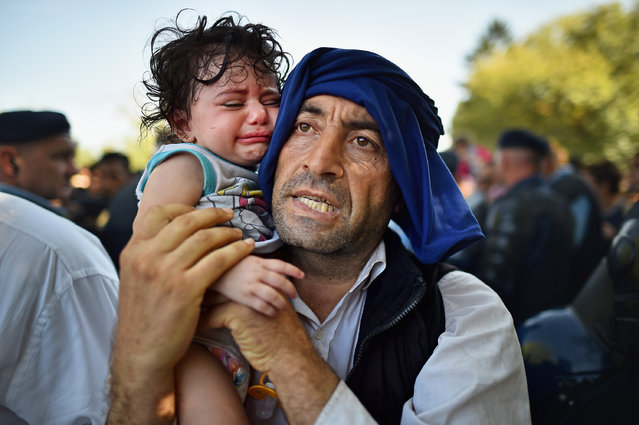 A man holds his crying child close to him as migrants force their way through police lines at Tovarnik station for a train to take them to Zagreb on September 17, 2015 in Tovarnik, Croatia. Migrants are crossing into Croatia from Serbia two days after Hungary sealed its border with Serbia, the majority of them want to reach Germany, amid divisions within the European Union over how to manage the ongoing crisis. (Photo by Jeff J. Mitchell/Getty Images) 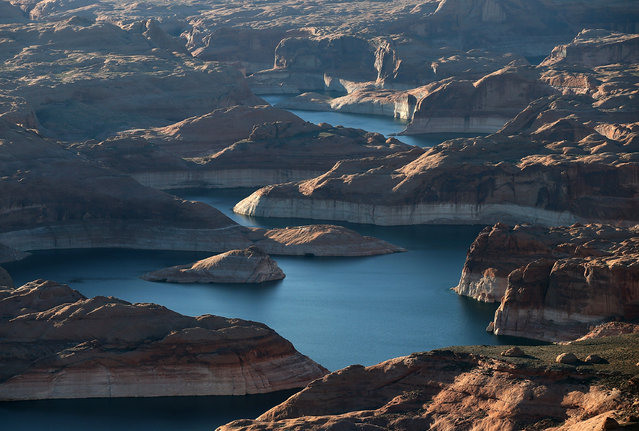 A bleached “bathtub ring” is visible on the rocky banks of Lake Powell on March 28, 2015 in Lake Powell, Utah. As severe drought grips parts of the Western United States, a below average flow of water is expected to enter Lake Powell and Lake Mead, the two biggest reservoirs of the Colorado River Basin. Lake Powell is currently at 45 percent of capacity, a recent study predicts water elevation there to be above 3,575 by September. The Colorado River Basin supplies water to 40 million people in seven western states. (Photo by Justin Sullivan/Getty Images) 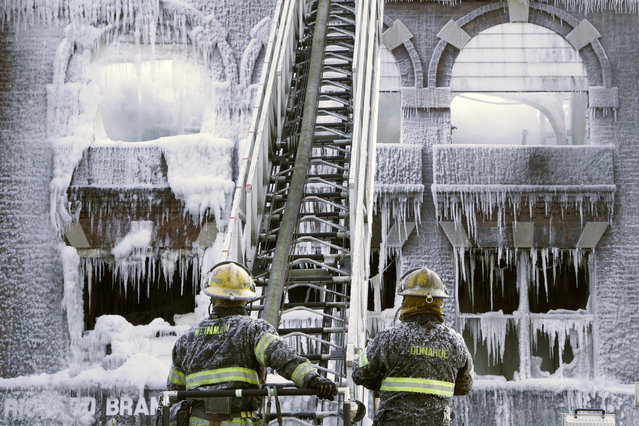 Philadelphia firefighters work the scene of an overnight blaze in west Philadelphia, Monday February 16, 2015, as icicles hang from where the water from their hoses froze. Bone-chilling, single digit temperatures have gripped the region, prompting the closure of all parish and regional Catholic elementary schools in the city of Philadelphia. (Photo by Jacqueline Larma/AP Photo) 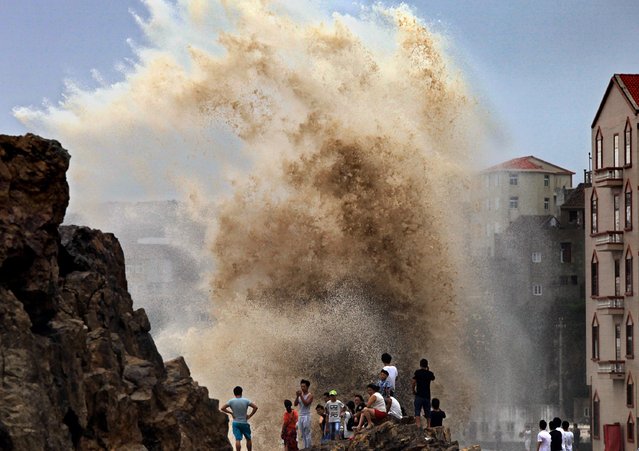 Residents gather to see huge waves stirred up by strong wind as typhoon Soudelor draws near the mainland of China in Wenling, east China's Zhejiang province on August 8, 2015. Typhoon Soudelor battered Taiwan with fierce winds and rain, leaving four people dead and a trail of debris in its wake as it takes aim at mainland China. (Photo by AFP Photo/Stringer) 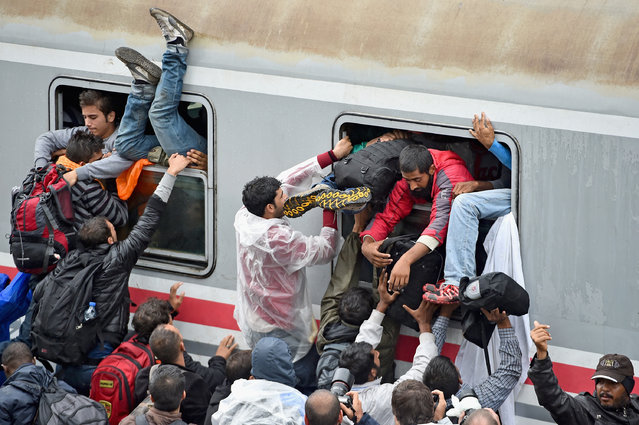 Migrants desperately try and board a train heading for Zagreb from Tovarnik station on September 20, 2015 in Tovarnik, Croatia. Croatia continues to send buses and trains north to its border with Hungary, as officials have estimated the around 20,000 migrants have entered since Wednesday. (Photo by Jeff J. Mitchell/Getty Images) 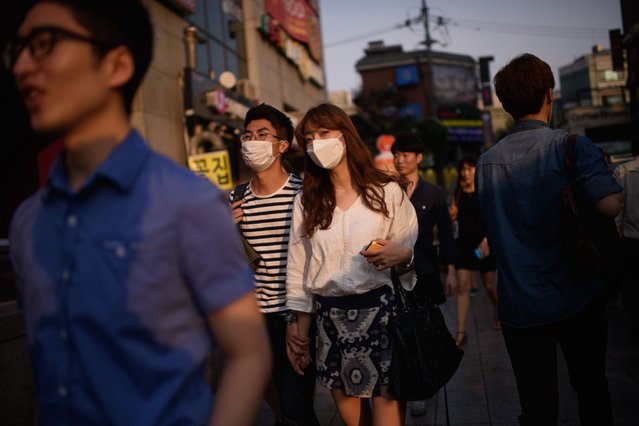 A couple wearing face masks walk on a street in Seoul on June 9, 2015. South Korea on June 9 reported its seventh death from Middle East Respiratory Syndrome (MERS) as the government – concerned about the economic impact – said it hoped to end the crisis this week. (Photo by Ed Jones/AFP Photo) 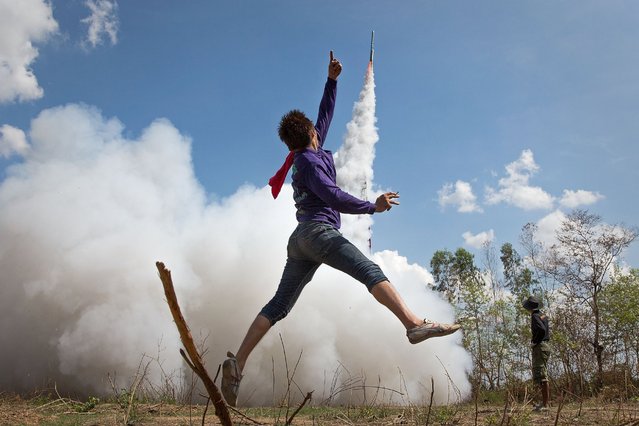 A young Thai man jumps in the air and cheers as his rocket takes off at the Bun Bang Fai Rocket Festival on May 10, 2015 in Yasothon, Thailand. (Photo by Taylor Weidman/Getty Images) 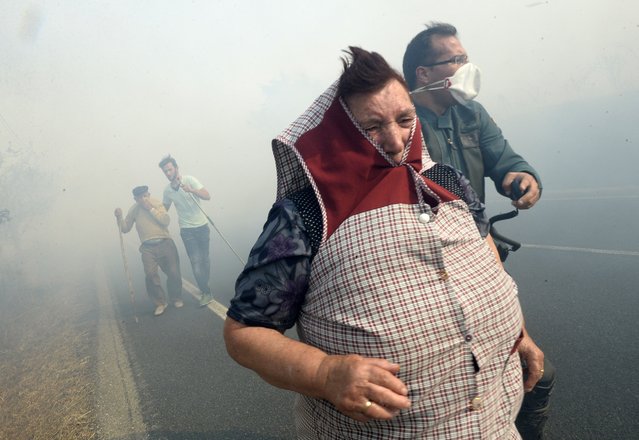