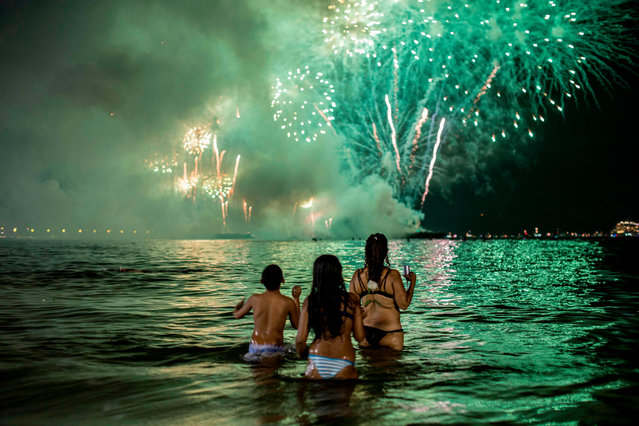 People watch fireworks from the water on Copacabana beach in Rio de Janeiro, Brazil, during the New Year celebration on January 1, 2019. (Photo by Daniel Ramalho/AFP Photo) 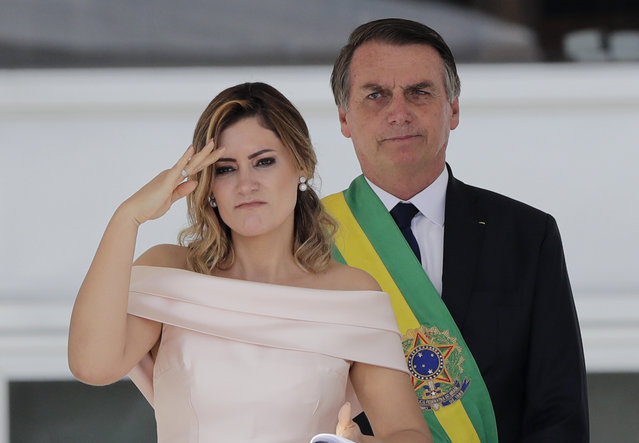 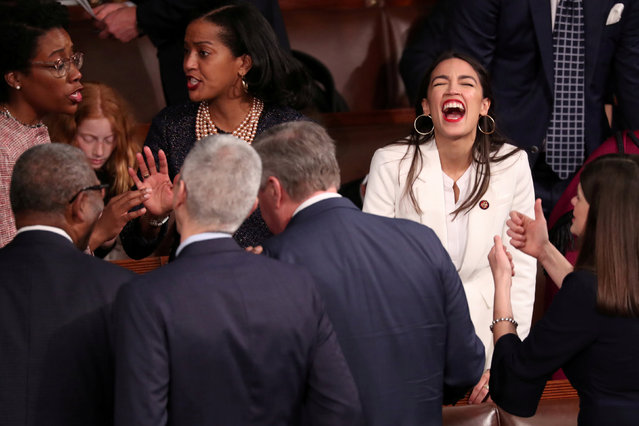 U.S. Representative-elect Alexandria Ocasio-Cortez (D-NY) reacts inside the House Chamber as the U.S. House of Representatives meets for the start of the 116th Congress on Capitol Hill in Washington, U.S., January 3, 2019. (Photo by Jonathan Ernst/Reuters) 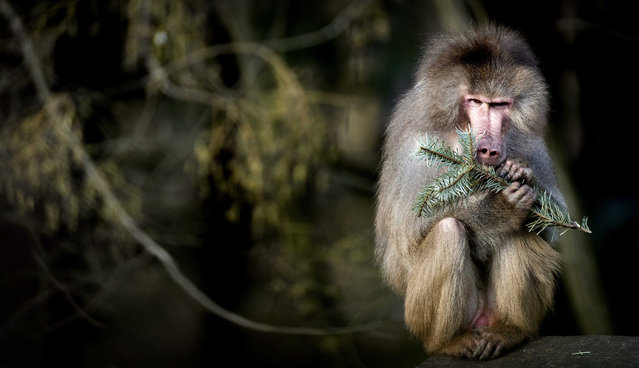 A baboon nibbles on the branch of an old Christmas tree at the Amersfoort Zoo in Amersfoort, The Netherlands, 06 January 2019. The animals at the zoo are donated thre trees for eating and playing by visitors who bring them to the animal park after the the Christmas holiday season. (Photo by Koen van Weel/EPA/EFE) 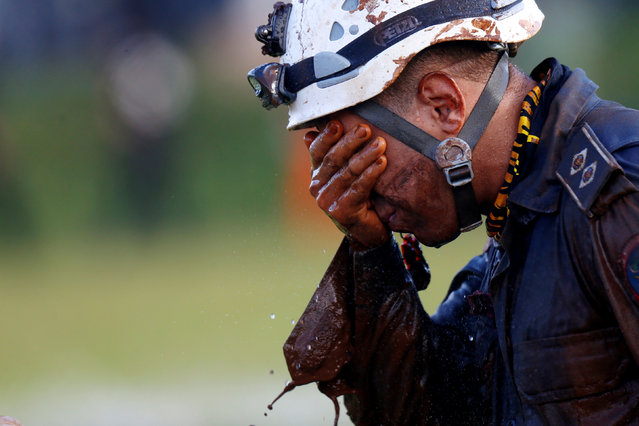 A member of rescue team reacts, upon returning from the mission, after a tailings dam owned by Brazilian mining company Vale SA collapsed, in Brumadinho, Brazil on January 27, 2019. (Photo by Adriano Machado/Reuters) 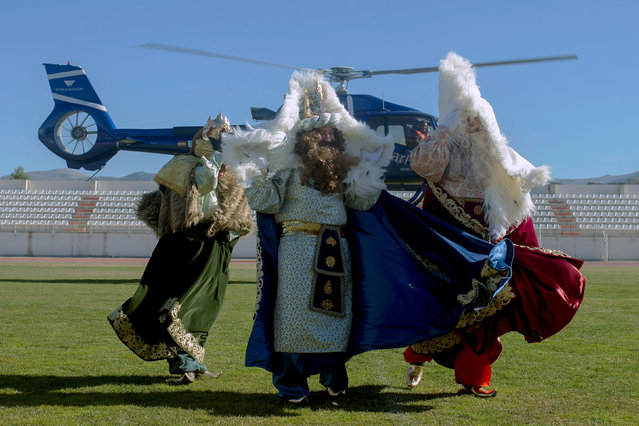 Men dressed up as Balthasar, Gaspar and Melchior, the Three Wise Men, protect themselves from the wind of a helicopter after arriving in it to participate in the Epiphany parade in Ronda, near Malaga, southern Spain January 5, 2019. (Photo by Jon Nazca/Reuters) 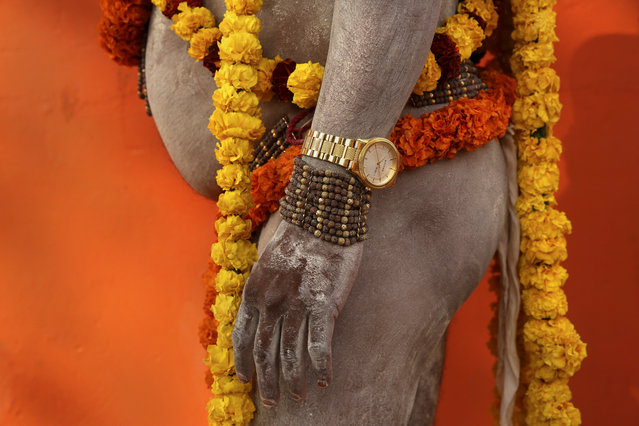 A Naga Sadhu, or a naked Hindu holy man of the Anand Akhada group, participates in a religious procession towards the Sangam, the confluence of rivers Ganges, Yamuna and mythical Saraswati, as part of the Kumbh festival in Allahabad, India, Friday, January 4, 2019. Millions of Hindu pilgrims are expected to take part in the large religious congregation on the banks of Sangam during the Kumbh festival in January 2019. (Photo by Rajesh Kumar Singh/AP Photo) 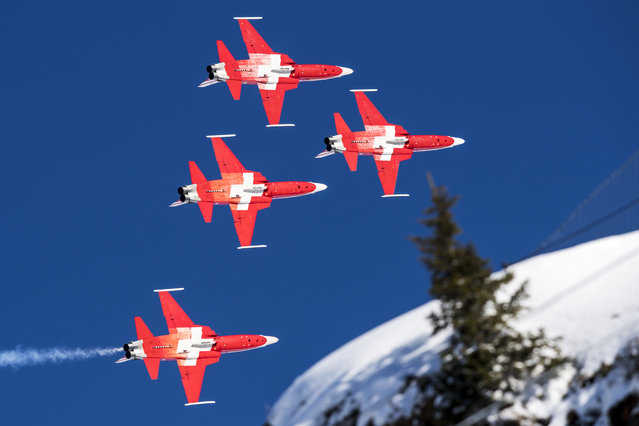 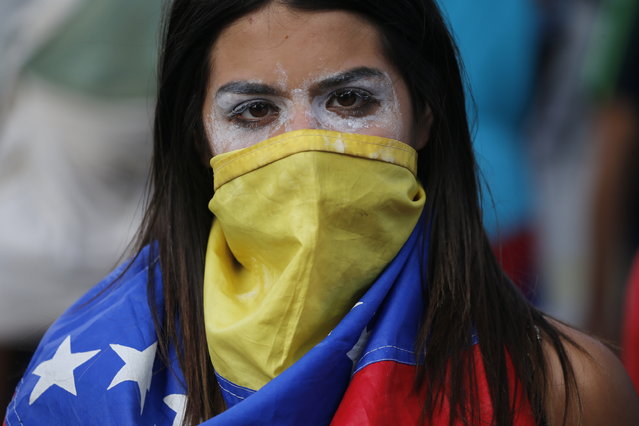 In this Wednesday, January 23, 2019, an anti-government protester covers her face with a Venezuelan flag, and uses toothpaste around her eyes to help lessen the effect of tear gas, during clashes with security forces after a rally demanding the resignation of President Nicolas Maduro in Caracas, Venezuela. The head of Venezuela's opposition-run congress declared himself interim president at the rally, until new elections can be called. (Photo by Fernando Llano/AP Photo) 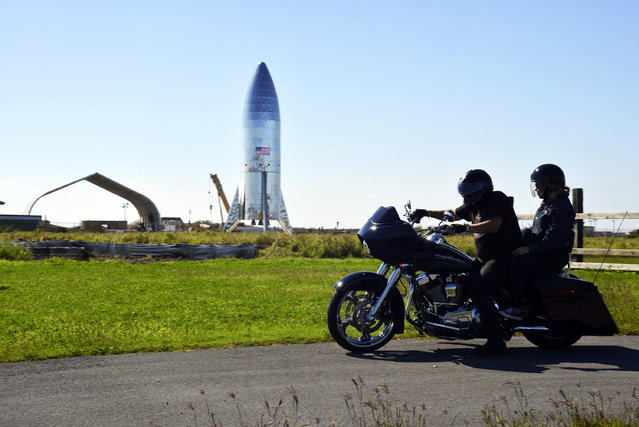 In this January 12, 2019 file photo, a motorcyclist rides near the SpaceX prototype Starship hopper at the Boca Chica Beach site in Texas. SpaceX says it will build its Mars spaceship in south Texas instead of the Port of Los Angeles, dealing another blow to the local economy only days after the company announced massive layoffs. The Southern California-based company announced Wednesday, January 16, 2019 that test versions of its Starship and Super Heavy rocket will be assembled at its Texas launch facility in a move to streamline operations. (Photo by Miguel Roberts/The Brownsville Herald via AP Photo) 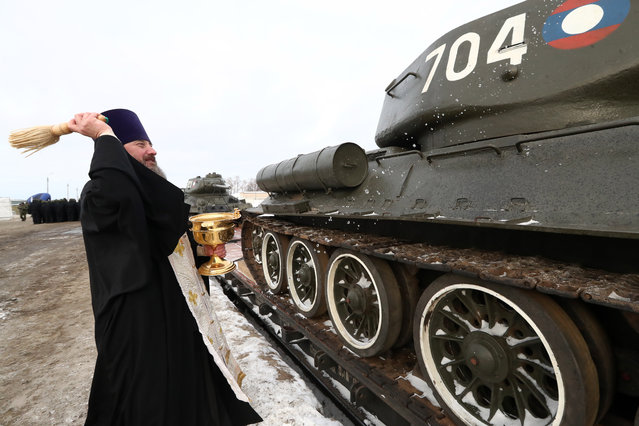 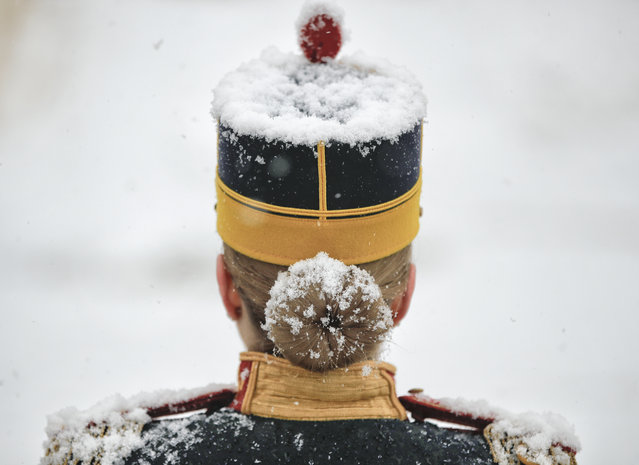 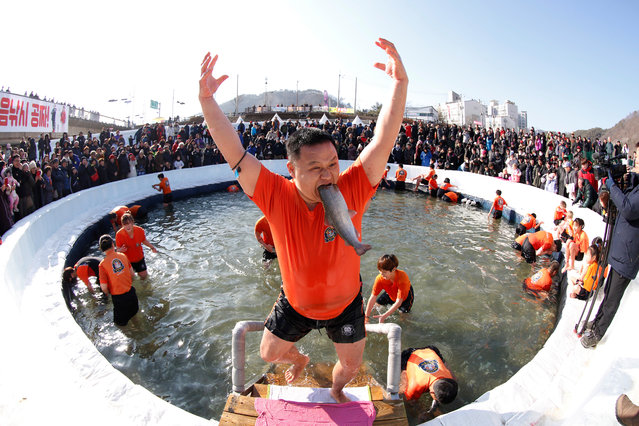 A festival visitor celebrates after attending bare hand fishing in a frozen river during the Hwacheon Sancheoneo Ice Festival at Hwacheon-gun in Gangwon province, South Korea, 05 January 2019. The festival runs under the slogan “Unfrozen Hearts, Unforgettable Memories” from 05 to 27 January 2019. (Photo by Jeon Heon-Kyun/EPA/EFE) 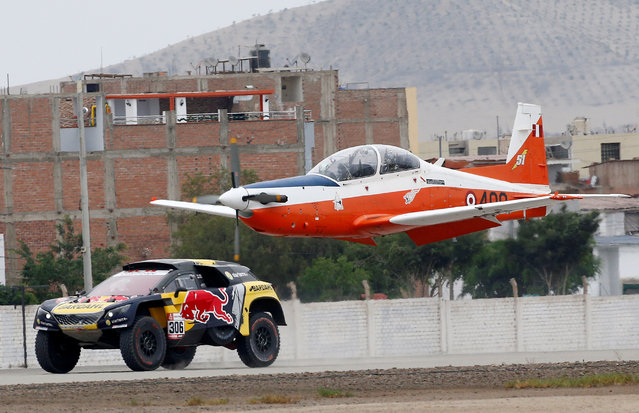 PH Sport's driver Sebastian Loeb races against an airplane during a performance act at the Peru Dakar Rally in Lima, Peru on January 5, 2019. (Photo by Carlos Jasso/Reuters) 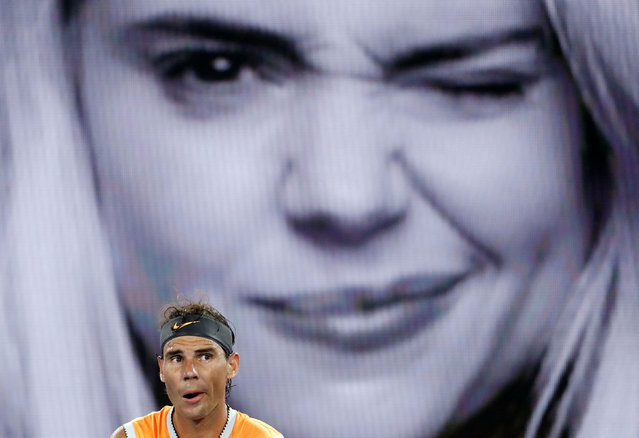 Spain's Rafael Nadal reacts during the match against Frances Tiafoe of the U.S. at the Australian Open tennis championships in Melbourne, Australia, Tuesday, January 22, 2019. (Photo by Aly Song/Reuters) 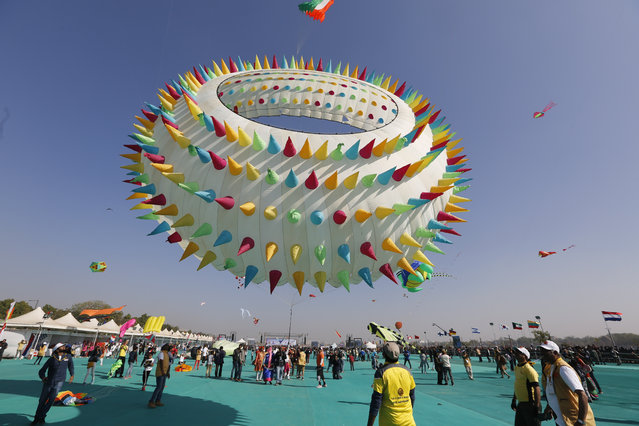 Indians watch a huge kite fly during International kite festival in Ahmadabad, India, Sunday, January 6, 2019. Kite flyers from various countries and across India are participating in the festival that is annually held on the Sabarmati riverfront here. (Photo by Ajit Solanki/AP Photo) 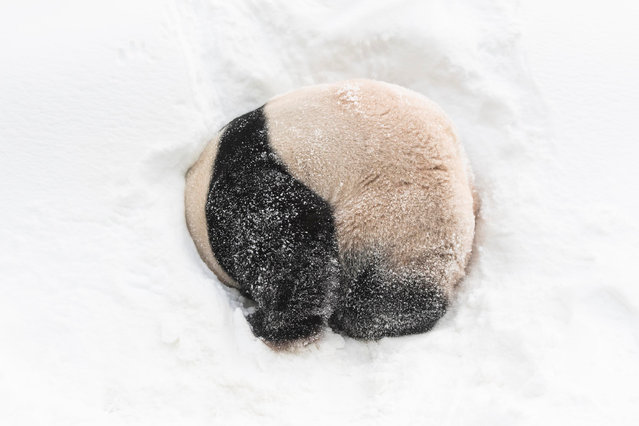 A giant panda plays at the Panda World of Everland, a theme park in Yongin, South Korea on January 15, 2019. (Photo by Jeonghun Ryu/Xinhua News Agency/Barcroft Images) 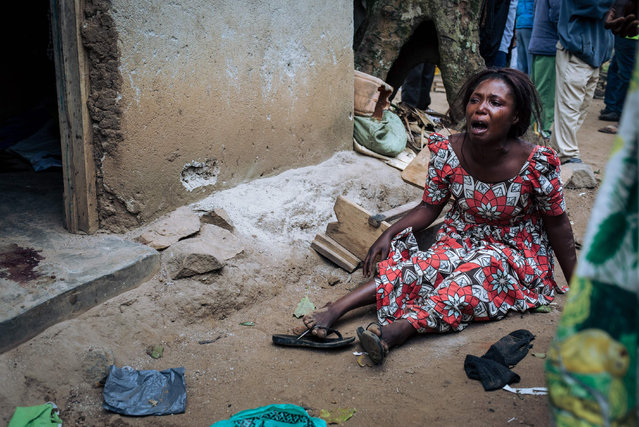 A woman mourns the death of her relatives killed in an attack in Masiani district in Beni last night by armed men gather at the scene on December 23, 2018. At least five people, including four civilians, were killed in an attack by Ugandan rebels over the border with DR Congo, an AFP reporter said on December 23, 2018, quoting witnesses. The attack by Uganda-based Allied Democratic Forces (ADF) targeted the locality of Masiani in Beni region and left at least one soldier dead as well as the civilians. (Photo by Alexis Huguet/AFP Photo) 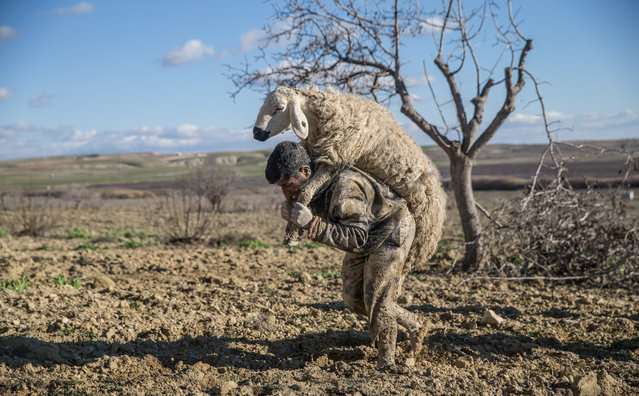 A man carries a sheep after it was rescued from mud in Sanliurfa, Turkey on January 9, 2019. Total of 67 sheep and a donkey rescued from mud by gendarmerie forces, firefighters and local people in Sanliurfa's Bozova district. (Photo by Halil Fidan/Anadolu Agency/Getty Images)
Edit Del
20 Dec 2019 00:05:00, post received 0 comments
Publication archive:
←   →
Popular tags:
All tags
Last searches: