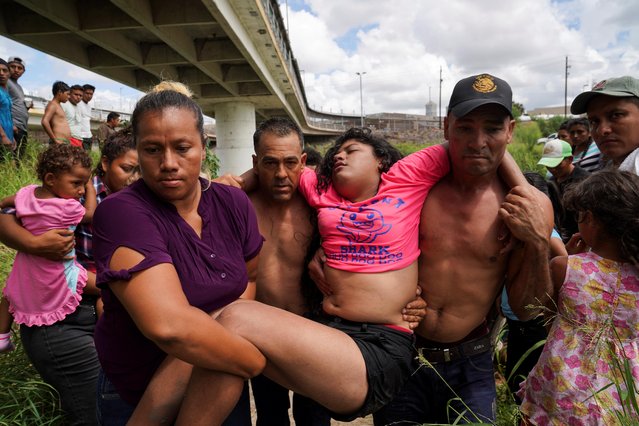 Brenda, a Honduran girl who is seeking asylum in the U.S., is carried from the Rio Grande in distress, where she had been bathing across the river from a Brownsville, Texas U.S. Customs and Border Protection tent facility as immigration hearings were being held by video teleconference, in Matamoros, Mexico September 12, 2019. Most of the people living in an encampment near the Gateway International Bridge have been sent back under the “Remain in Mexico” program, officially named Migrant Protection Protocols (MPP). (Photo by Veronica G. Cardenas/Reuters) 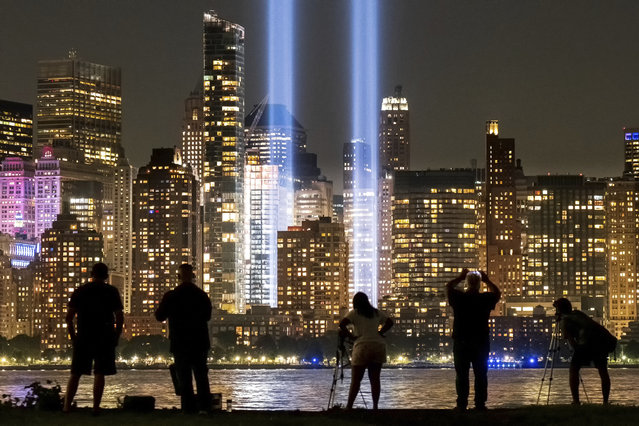 Spectators and photographers look across the Hudson River from Jersey City, N.J., at the Sept. 11 tribute lights in New York City on the 18th anniversary, Wednesday, September 11, 2019, of the attacks on the twin towers of the World Trade Center. (Photo by J. David Ake/AP Photo) 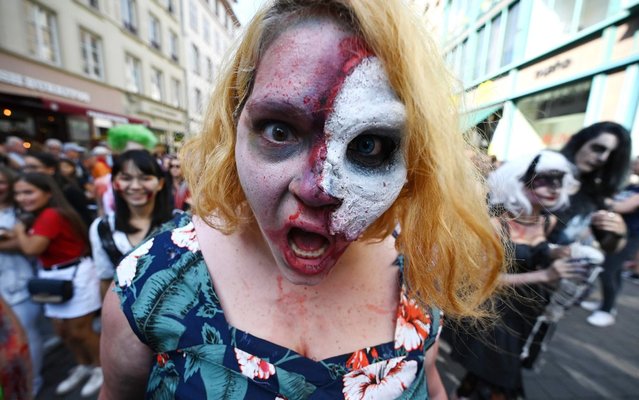 Enthusiast dressed as zombies take part in the Zombie Walk event on September 14, 2019 in the eastern French city of Strasbourg, within the framework of the 12th edition of the European Fantastic Film festival, which runs from September 14 to 22. (Photo by Frederick Florin/AFP Photo) 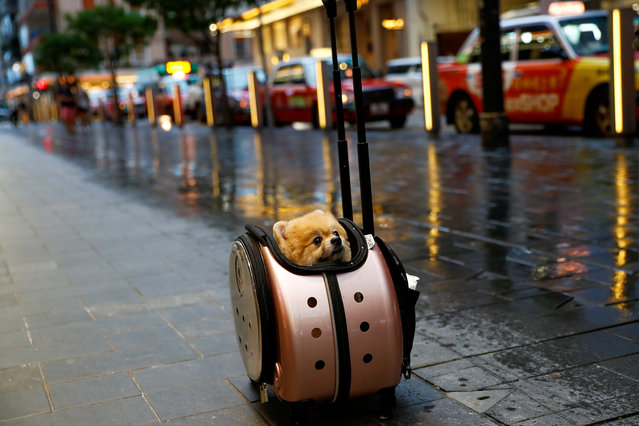 A Pomeranian dog sits in a rolling pet carrier in Hong Kong, China on September 4, 2019. (Photo by Kai Pfaffenbach/Reuters) 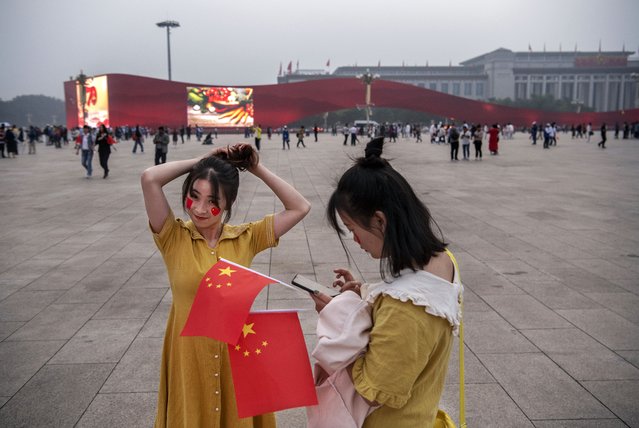 A Chinese woman adjusts her hair as a friend holds the national flag as they visit Tiananmen Square on September 27, 2019 in Beijing, China. China will mark the 70th anniversary of the founding of the People's Republic of China in 1949 on October 1st. (Photo by Kevin Frayer/Getty Images) 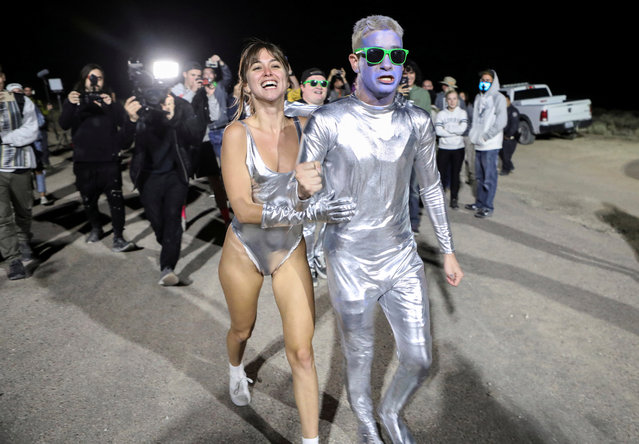 People dressed in costumes chant as they approach a gate to Area 51 as an influx of tourists responding to a call to “storm” Area 51, a secretive U.S. military base believed by UFO enthusiasts to hold government secrets about extra-terrestrials, is expected in Rachel, Nevada, U.S. September 20, 2019. (Photo by Jim Urquhart/Reuters) 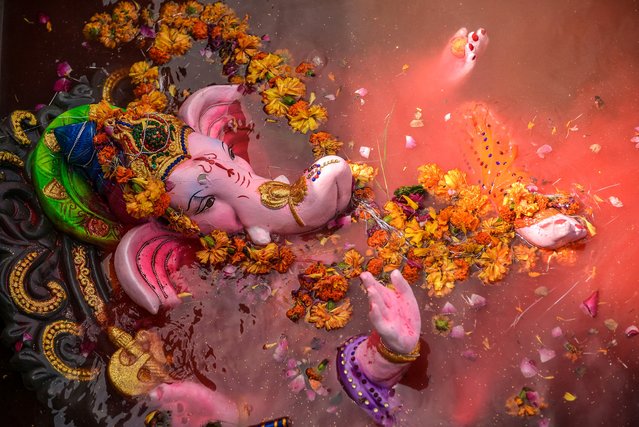 An idol of the elephant-headed Hindu God Lord Ganesha is immersed into bay water on the last day of the Ganesh Chaturthi festival in Ajmer on September 12, 2019. (Photo by Shaukat Ahmed/AFP Photo) 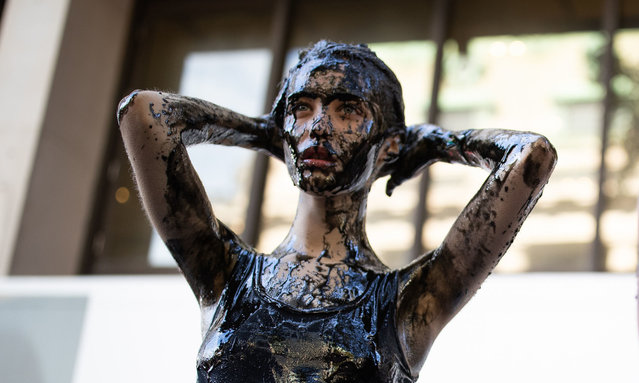 Activists from PETA stage a demonstration outside a venue during London Fashion Week in London, Britain, September 13, 2019. The organisation says it is dedicated to the protection of animals worldwide. (Photo by Aaron Chown/PA Wire Press Association) 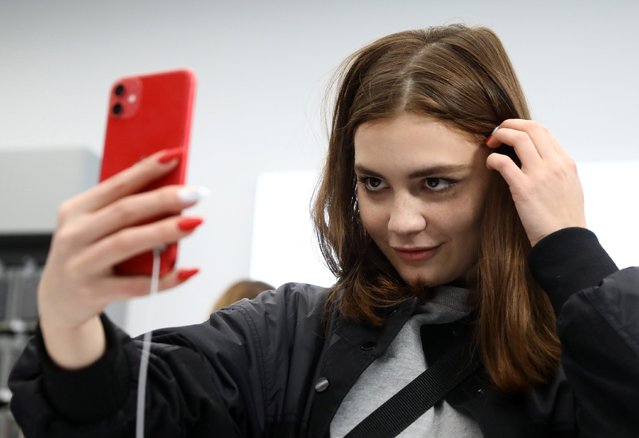 A customer takes a selfie at a re:Store shop in Tverskaya Street in Moscow, Russia on September 20, 2019 as Apple launches iPhone 11, iPhone 11 Pro, and iPhone 11 Pro Max sales in Russia. (Photo by Mikhail Tereshchenko/TASS) 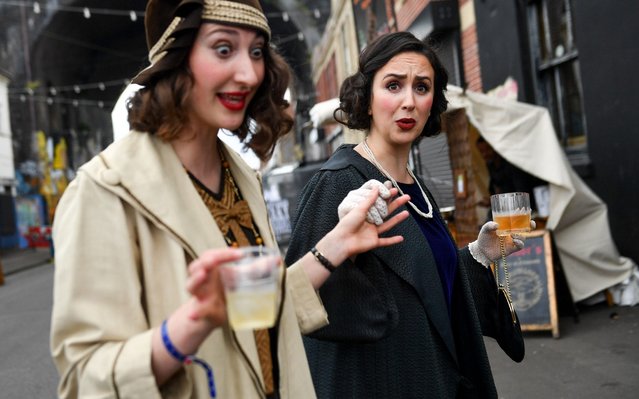 Actors recreate scenes on the streets of Digbeth during The Legitimate Peaky Blinders Festival 2019 at the Custard Factory on September 14, 2019 in Birmingham, England. (Photo by Jacob King/PA Wire Press Association) 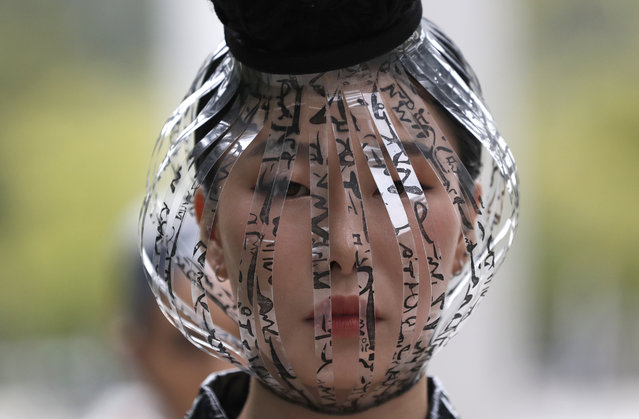 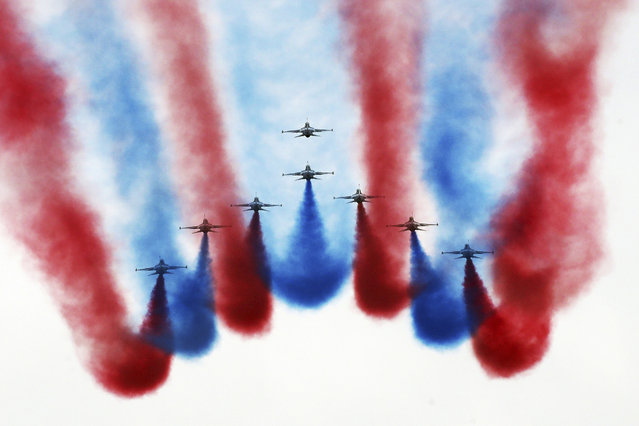 South Korea's Black Eagles acrobatic flight team performs during a media preview of Air Power Day at Osan Air Base in Pyeongtaek, South Korea, Friday, September 20, 2019. United States and South Korea Air Force demonstration teams will participate at the air show which will be held from Sept. 21 to Sept. 22. (Photo by Hong Hae-in/Yonhap via AP Photo) 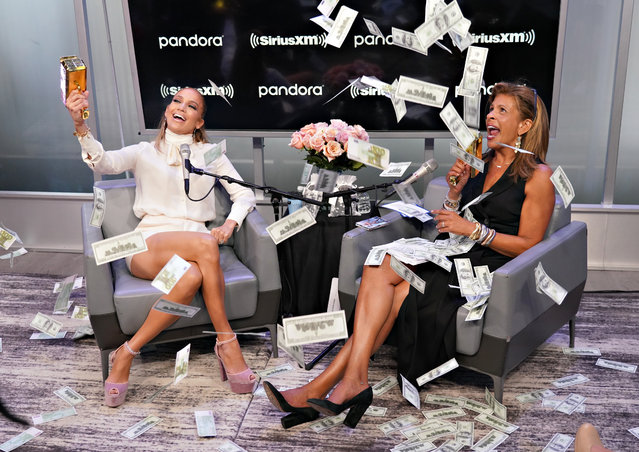 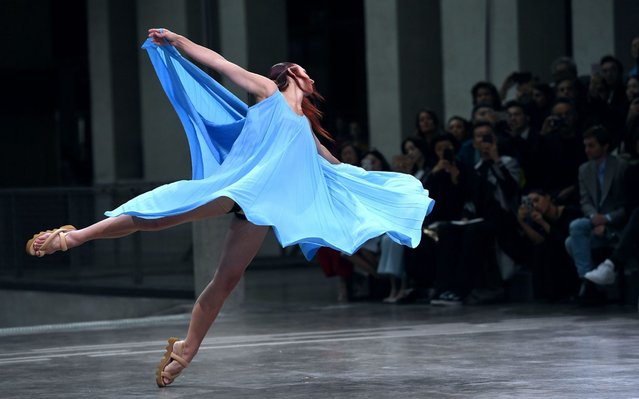 A model floats and dances as she presents a creation by Japanese designer Issey Miyake during the Women's Spring-Summer 2020 Ready-to-Wear collection fashion show, in Paris on September 27, 2019. (Photo by Christophe Archambault/AFP Photo) 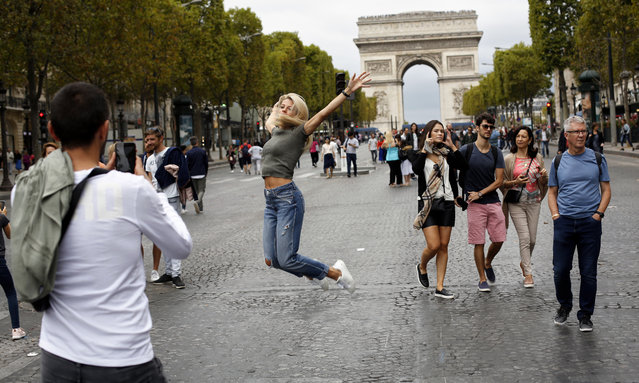 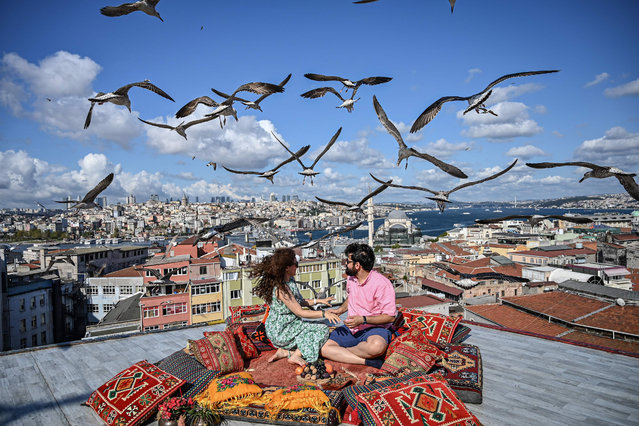 A couple sit on the terrase of a cafe in Istanbul as seagulls fly over them on September 10, 2019. (Photo by Ozan Kose/AFP Photo) 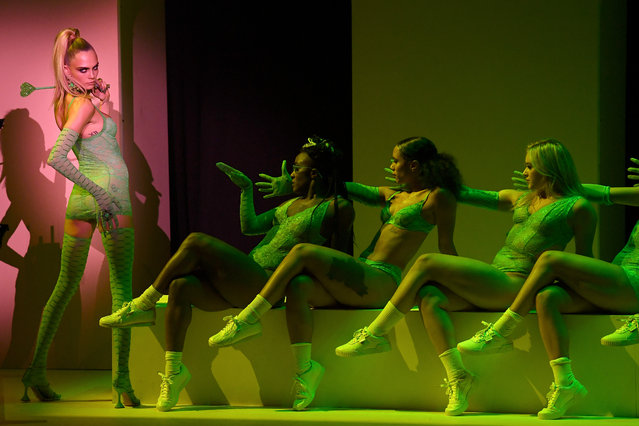 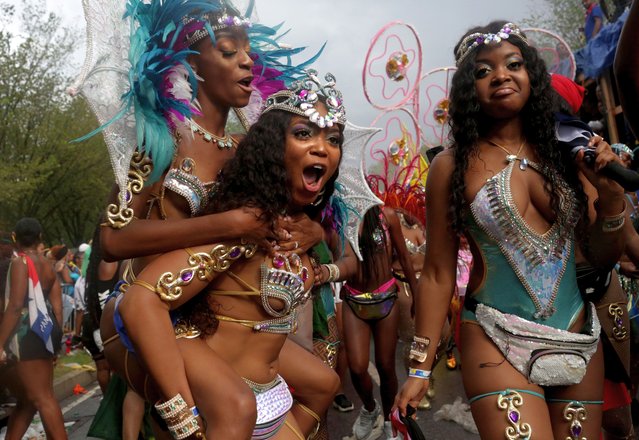 Parade-goers walk in the annual West Indian Day Parade on September 02, 2019 in the Brooklyn borough of New York City. The annual celebration of Caribbean culture is one of the largest of its kind and features dozens of floats and costumed participants that make their way down Flatbush Avenue. (Photo by Yana Paskova/Getty Images) 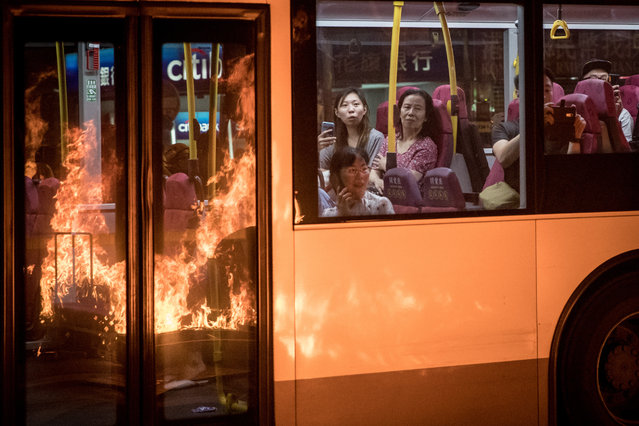 Flames from a burning barricade lit by pro-democracy protesters is reflected in the windows of a passing bus as passengers watch on during a protest gathering in front of Mong Kok police station on September 22, 2019 in Hong Kong, China. Pro-democracy protesters have continued demonstrations across Hong Kong, calling for the city's Chief Executive Carrie Lam to immediately meet the rest of their demands, including an independent inquiry into police brutality, the retraction of the word “riot” to describe the rallies, and genuine universal suffrage, as the territory faces a leadership crisis. (Photo by Chris McGrath/Getty Images)
Edit Del
21 Jan 2020 00:03:00, post received 0 comments
Publication archive:
←   →
Popular tags:
All tags
Last searches: