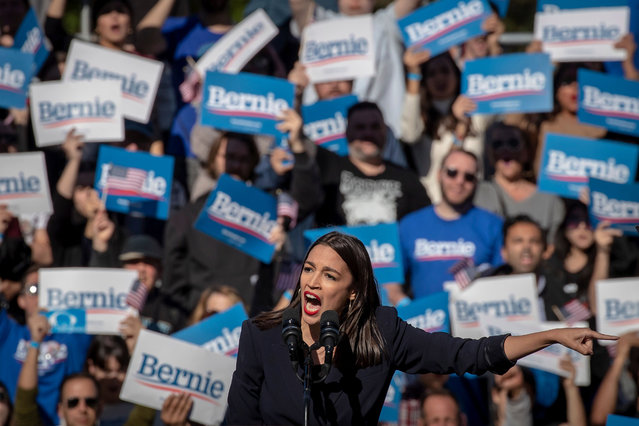 US Democratic Representative Alexandria Ocasio-Cortez of New York appears at a “Bernie's Back” rally for US Democratic Senator of Vermont and Presidential Candidate Bernie Sanders in the Queens borough of New York, New York, USA, 19 October 2019. (Photo by Gary He/EPA/EFE) 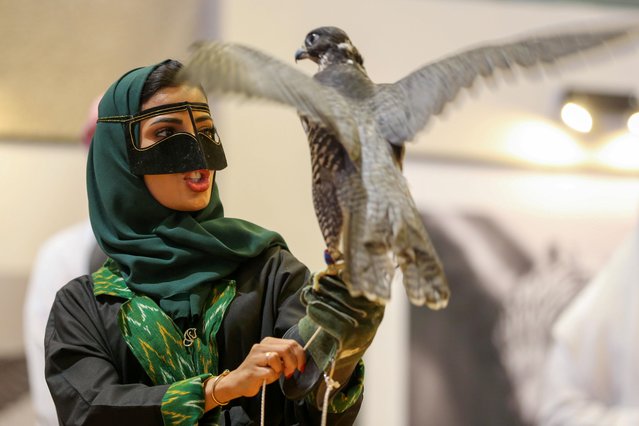 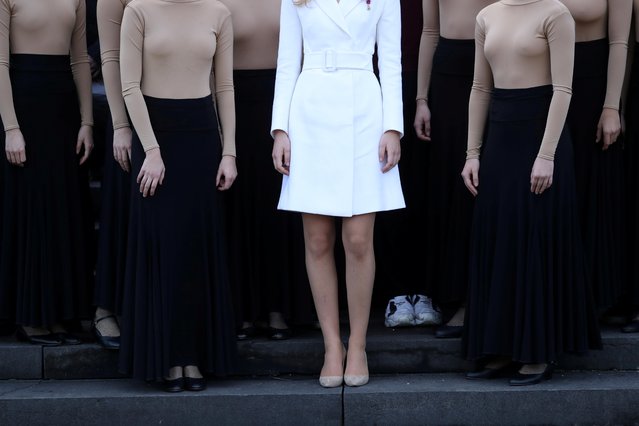 Belgium's Crown Princess Elisabeth poses with dancers and youth after a ceremony on the occasion of her 18th birthday, outside the Royal Palace in Brussels, Belgium on October 25, 2019. (Photo by Yves Herman/Reuters) 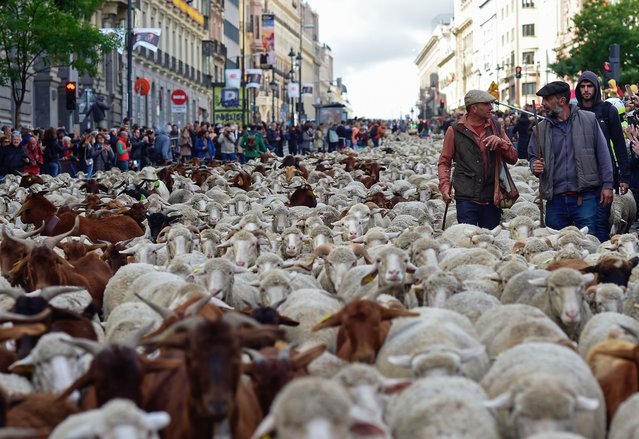 Shepherds herd flocks of sheep in the city center of Madrid on October 20, 2019. Shepherds guided a flock of around 2,000 sheep through the streets of Madrid today in defence of ancient grazing and migration rights increasingly threatened by urban sprawl. (Photo by Oscar Del Pozo/AFP Photo) 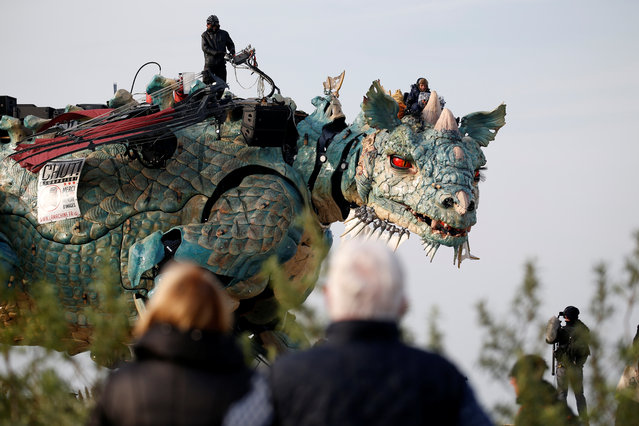 People look at the “Dragon de Calais” by Francois Delaroziere and La compagnie La Machine during a rehearsal in the harbour of Calais, France on October 30, 2019. (Photo by Pascal Rossignol/Reuters) 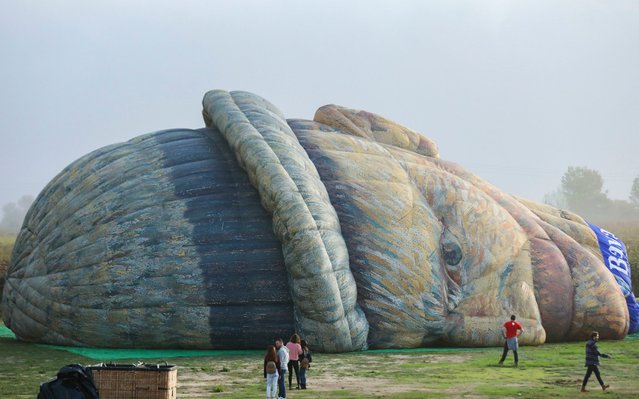 Participants prepare their hot air balloons at the Flutuar – III Coruche Ballooning Festival, in Coruche, Portugal, 29 October 2019. Today the balloons were not able to take off due to weather conditions. More than 20 ballooning teams from various countries with conventional and special shape balloons are taking part in the festival that runs from 29 October to 03 November. (Photo by Miguel A. Lopes/EPA/EFE/Rex Features/Shutterstock) 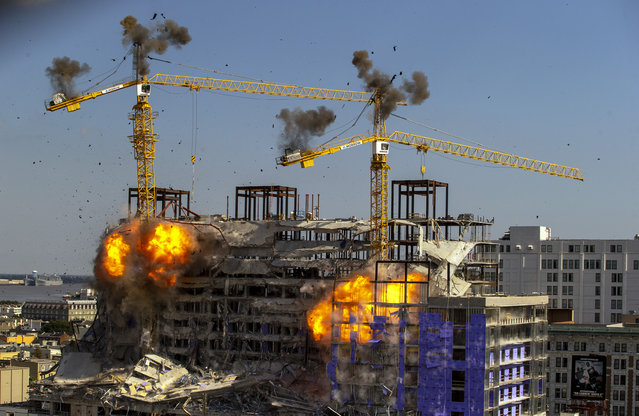 Two large cranes from the Hard Rock Hotel construction collapse come crashing down after being detonated for implosion in New Orleans, Sunday, October 20, 2019. Officials set off thundering explosions Sunday to topple two cranes looming precariously over a partially collapsed hotel in New Orleans, but most of one crane appeared to be left dangling atop the ruined building while the other crashed down. (Photo by David Grunfeld/The Advocate via AP Photo) 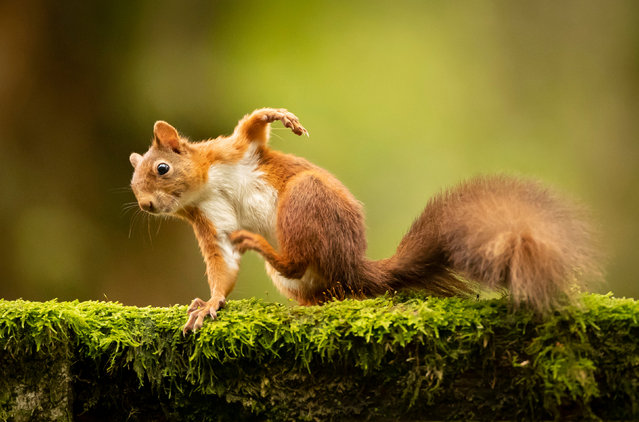 A red squirrel forages for food in preparation for winter in the Widdale red squirrel reserve in North Yorkshire, England on October 18, 2019. The UK Squirrel Accord estimates that there are about 140,000 red squirrels in the UK, years ago there were more than 3m. (Photo by Danny Lawson/PA Images via Getty Images) 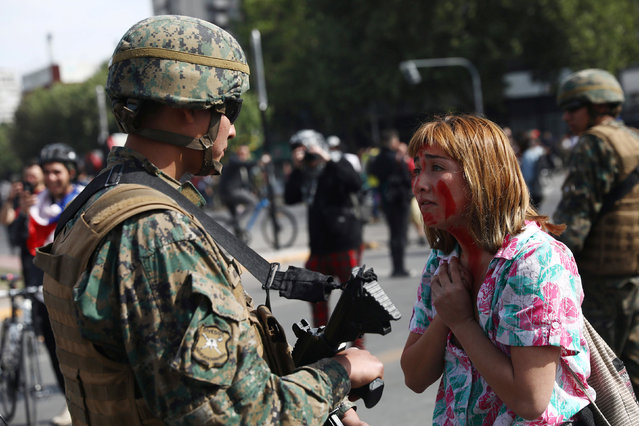 A demonstrator gestures in front of a soldier during a protest against the increase in subway ticket prices in Santiago, Chile, October 19, 2019. (Photo by Edgard Garrido/Reuters) 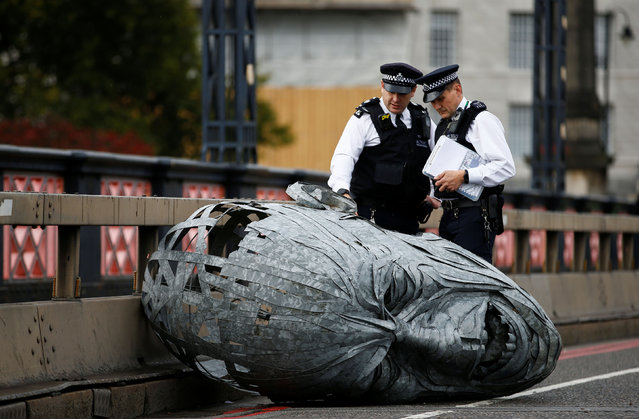 A sculpture made by activists on Lambeth bridge during the Extinction Rebellion protest in London, England on October 7, 2019. (Photo by Henry Nicholls/Reuters) 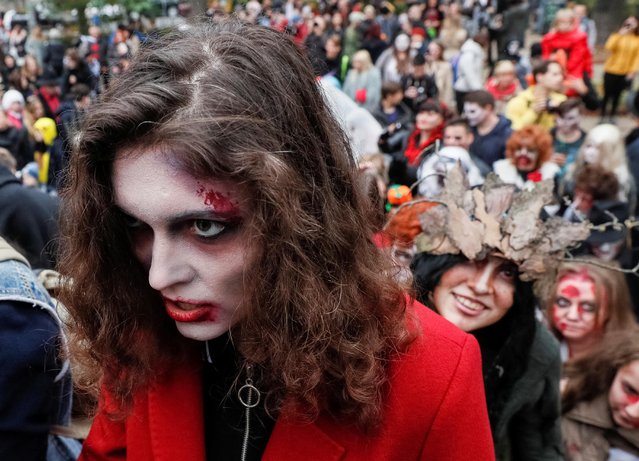 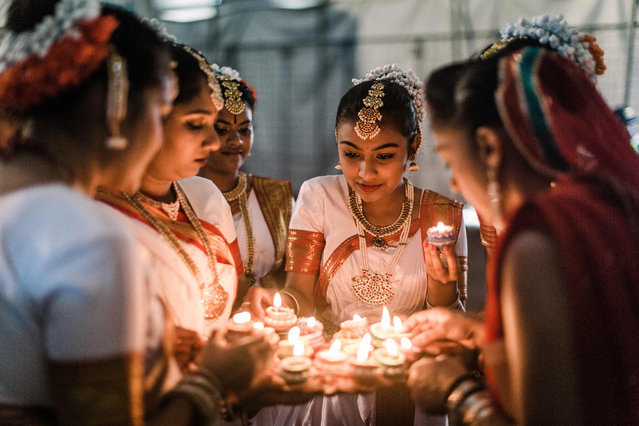 A group of colourful dancers from the Kumari Shiksha Dance Institution light colourful clay lamps in preparation to celebrate Diwali during the two day Diwali (Festival of Lights) Hindu festival celebrations at the old Drive-Inn in Durban, on October 19, 2019. The two-day festival attracts over 100,000 visitors. The festival celebrations include, parading of floats, chariots, singing of devotional songs, dances, games, face painting, food stalls of vegetarian food, clothing, display of toys and jewellery. Young people also get the opportunity to showcase their cultural and spiritual talents. A billion Hindus worlwide will officially celebrate Diwali on 27 October 2019. (Photo by Rajesh Jantilal/AFP Photo) 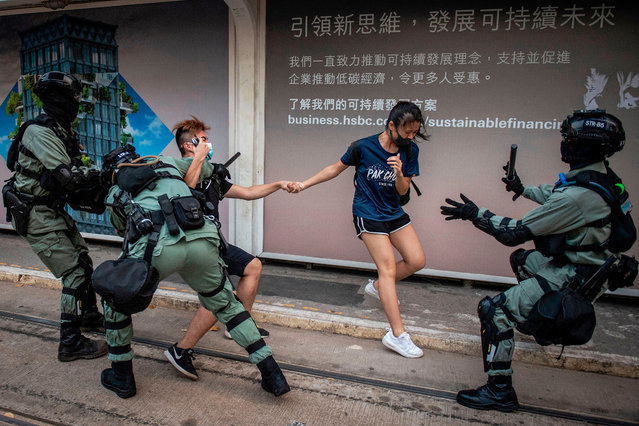 Police chase down a couple wearing facemasks in the central district in Hong Kong on October 5, 2019, a day after the city's leader outlawed face coverings at protests invoking colonial-era emergency powers not used for half a century. Masked pro-democracy protesters marched through Hong Kong in defiance of a ban on face coverings as much of the city ground to a halt on October 5, with the subway suspended and many shops shuttered following another night of violence. (Photo by Nicolas Asfouri/AFP Photo) 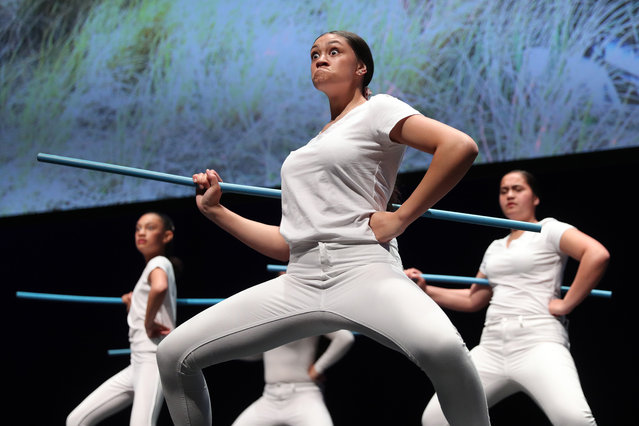 Dancers from the Tareikura Academy dance on stage during The Power Of Inclusion Summit 2019 at Aotea Centre on October 03, 2019 in Auckland, New Zealand. The Power of Inclusion is a global summit where international and local voices share their stories, experiences and expertise to generate momentum for a future where representation and inclusion are the new screen industry standards. The Power of Inclusion summit is hosted by New Zealand Film Commission and Women in Film and Television International, with support from The Walt Disney Studios. (Photo by Michael Bradley/Getty Images for New Zealand Film Commission) 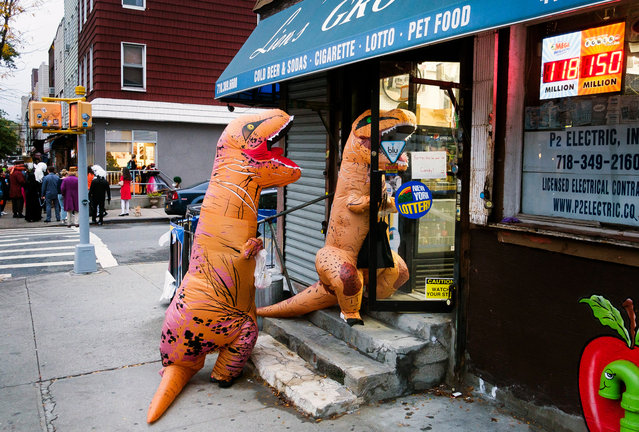 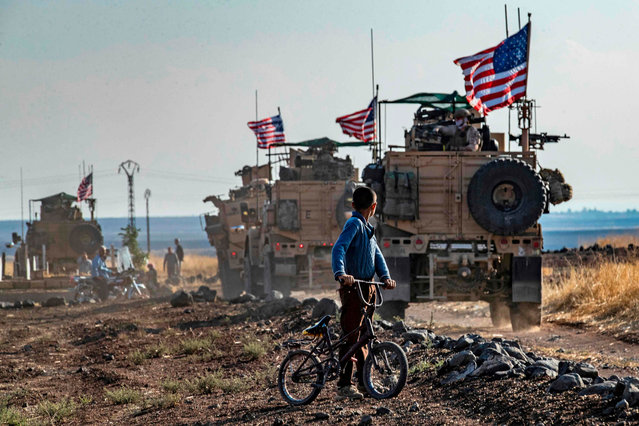 A Syrian boy on his bicycle looks at a convoy of US armoured vehicles patrolling fields near the northeastern town of Qahtaniyah at the border with Turkey, on October 31, 2019. US forces accompanied by Kurdish fighters of the Syrian Democratic Forces (SDF) patrolled part of Syria's border with Turkey, in the first such move since Washington withdrew troops from the area earlier this month, an AFP correspondent reported. (Photo by Delil Souleiman/AFP Photo) 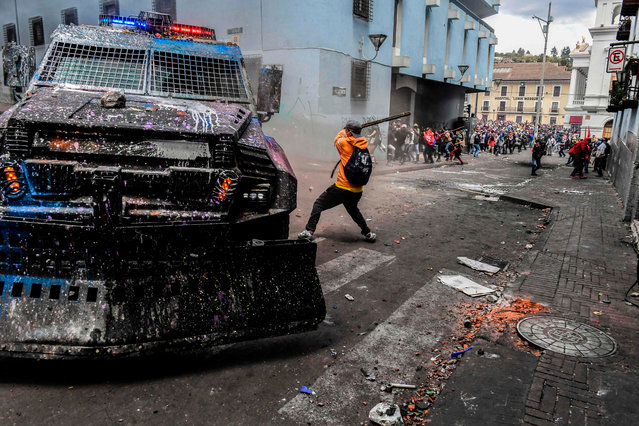 A demonstrator hits an armoured vehicle with a stick during clashes with riot police in Quito, as thousands march against Ecuadorean President Lenin Moreno's decision to slash fuel subsidies, on October 9, 2019. Unions and other groups alongside thousands of farmers and indigenous people are expected in the streets of the capital Quito. Protests and clashes erupted in Ecuador a week ago, after the government doubled fuel prices as part of an agreement with the International Monetary Fund to obtain loans despite its high public debt. (Photo by Martin Bernetti/AFP Photo) 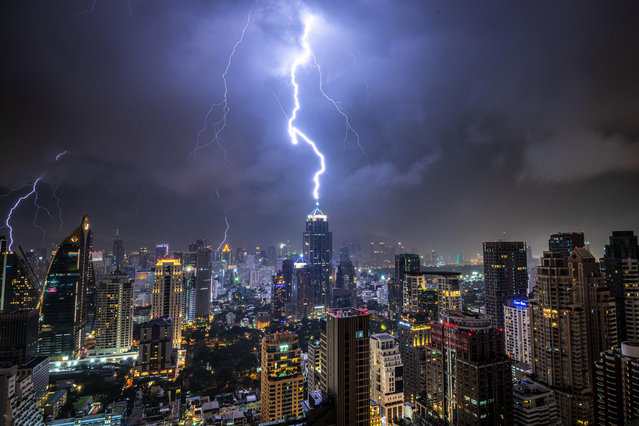 In this picture taken on October 27, 2019 lightening strikes on a building during a thunderstorm in Bangkok, Thailand. (Photo by Mladen Antonov/AFP Photo) 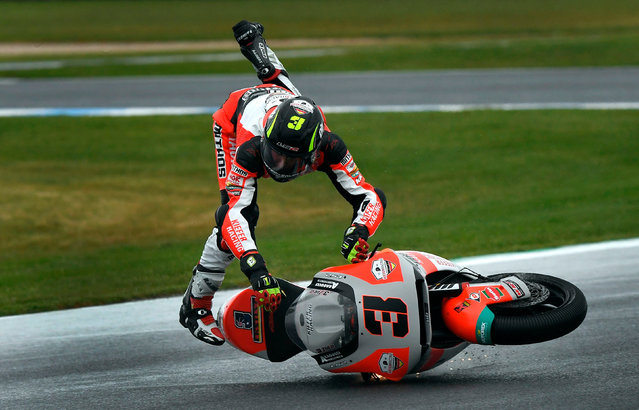