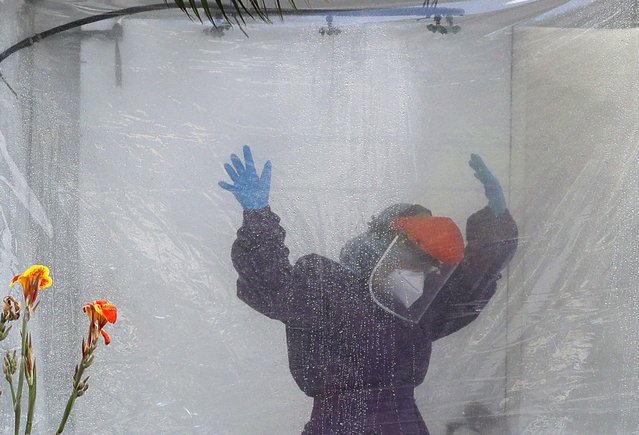 A health worker wearing a protective suit is disinfected inside a portable tent outisee the Gat Andres Bonifacio Memorial Medical Center during an enhanced community quarantine to prevent the spread of the new coronavirus in Manila, Philippines, Monday April 27, 2020. (Photo by Aaron Favila/AP Photo) 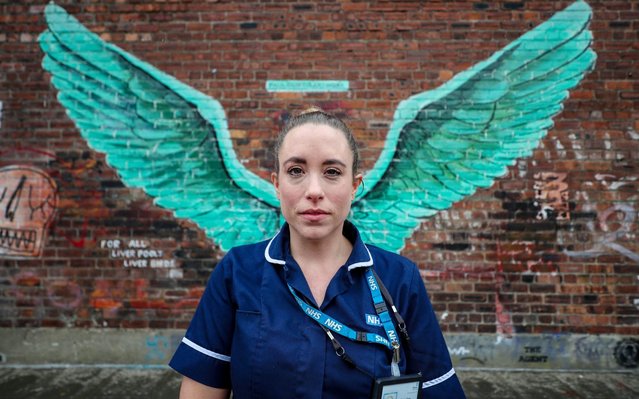 Erica Daly, a District Nurse Team Leader at Mersey Care NHS, stands in front of the “Liver Bird Wings”, an artwork by Paul Curtis on a wall within LIverpool's Baltic Triangle on April 29, 2020. (Photo by Peter Byrne/PA Images via Getty Images) 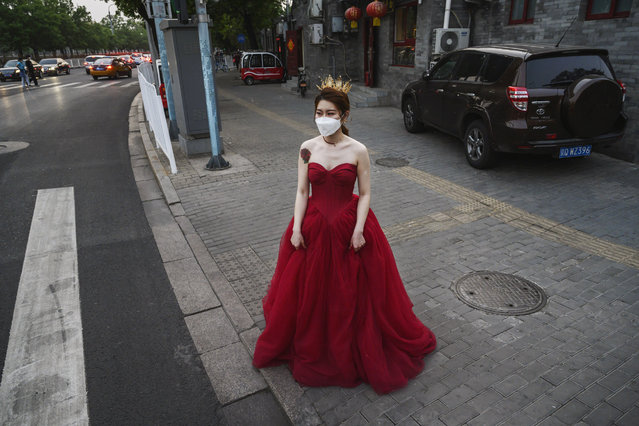 A Chinese woman wears her dress and a protective mask as she waits to change after taking pictures in advance of her wedding near the Forbidden City, on April 30, 2020 in Beijing, China. Beijing lowered its risk level after more than three months Thursday in advance of the May holiday, allowing most domestic travellers arriving in the city to do so without having to do 14 days of quarantine. The Forbidden City will open to a limited number of visitors as of Thursday morning. After decades of growth, officials said China's economy had shrunk in the latest quarter due to the impact of the coronavirus epidemic. The slump in the world's second largest economy is regarded as a sign of difficult times ahead for the global economy. While industrial sectors in China are showing signs of reviving production, a majority of private companies are operating at only 50% capacity, according to analysts. With the pandemic hitting hard across the world, officially the number of coronavirus cases in China is dwindling, ever since the government imposed sweeping measures to keep the disease from spreading. Officials believe the worst appears to be over in China, though there are concerns of another wave of infections as the government attempts to reboot the world's second largest economy. Since January, China has recorded more than 81,000 cases of COVID-19 and at least 3,200 deaths, mostly in and around the city of Wuhan, in central Hubei province, where the outbreak first started. (Photo by Kevin Frayer/Getty Images) 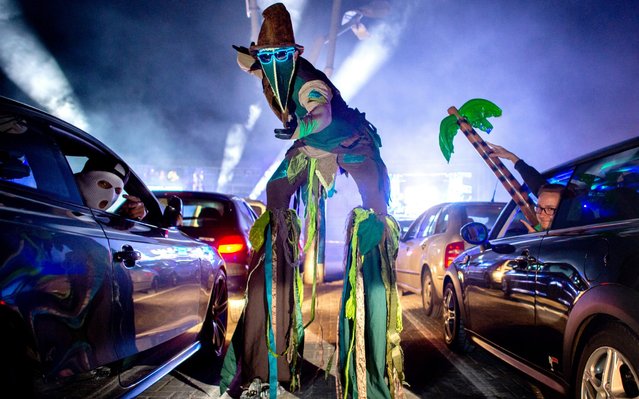 An actor walks on stilts during a car disco across the parking lot of the discotheque “Index” in Schüttorf, Lower Saxony on April 30, 2020. This is the second time that the large-capacity discotheque in Grafschaft Bentheim offers a car disco. A total of 500 guests can participate in 250 vehicles. (Photo by Hauke-Christian Dittrich/dpa) 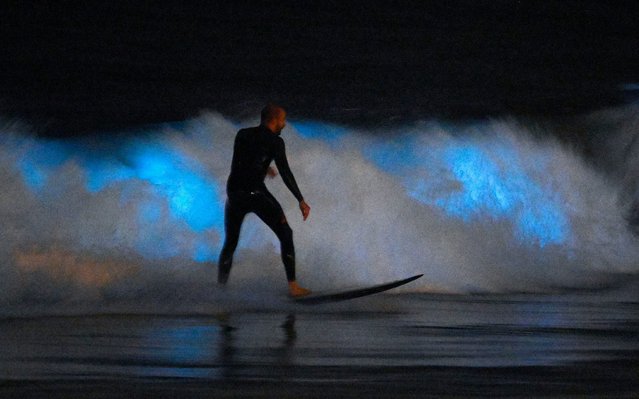 A surfer rides a wave as bioluminescent plankton lights up the surf around him during the coronavirus outbreak, Thursday, April 30, 2020, in Newport Beach, Calif. California Gov. Gavin Newsom on Thursday temporarily closed Orange County's coastline after large crowds were seen there. (Photo by Mark J. Terrill/AP Photo) 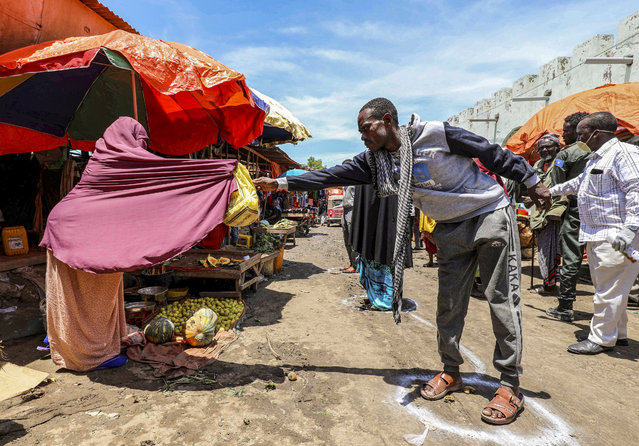 A Somali woman sells fruits to a customer standing at a social distancing signage, as a measure to stem the growing spread of the coronavirus disease (COVID-19) outbreak, at the market centre in Hamarweyne district in Mogadishu, Somalia on April 16, 2020. (Photo by Feisal Omar/Reuters) 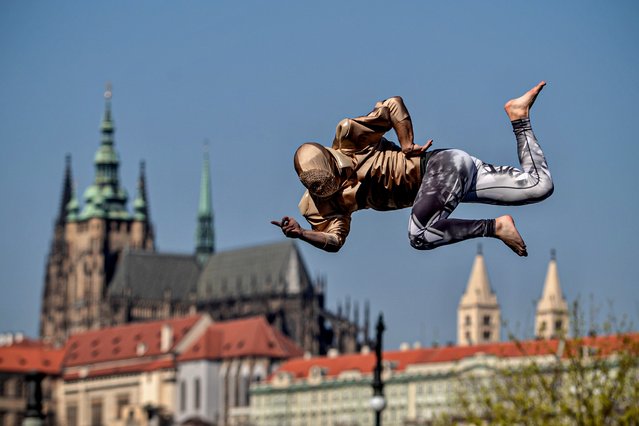 A member of the contemporary circus company Cirk La Putyka perform on the mobile trampoline as he amuses local residents in Prague, Czech Republic, 09 April 2020. The aim of the Cirk La Putyka events in the streets of Czech capital is to get live art back to people during the lockdown. According to them, when people can't go to the artists, to the theater, the actors go to the people. The Czech government has imposed a lockdown in an attempt to slow down the spread of the pandemic COVID-19 disease caused by the SARS-CoV-2 coronavirus. (Photo by Martin Divisek/EPA/EFE) 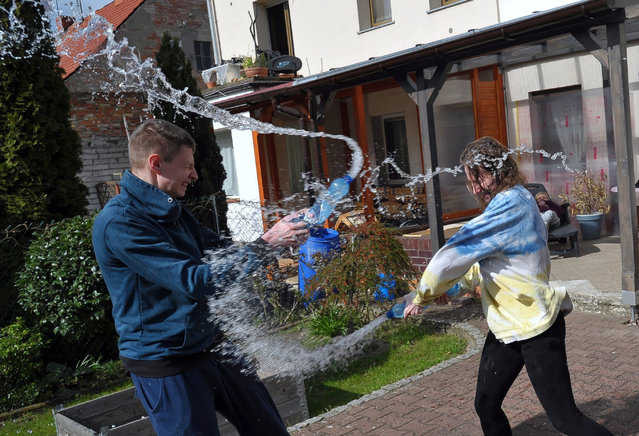 A Polish girl and a boy throw water over each other on Wet Monday in Szczecin, northwestern Poland, 13 April 2020. Wet Monday is a Catholic celebration held on Easter Monday mostly in Poland, but also in the Czech Republic, Slovakia, Hungary and some parts of western Ukraine. Due to the lockdown it is forbidden to celebrate this holiday in public. (Photo by Marcin Bielecki/EPA/EFE) 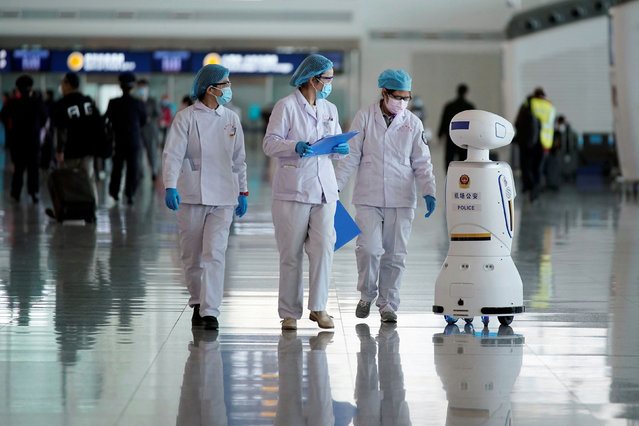 Medical workers walk by a police robot at the Wuhan Tianhe International Airport after travel restrictions to leave Wuhan, the capital of Hubei province and China's epicentre of the novel coronavirus disease (COVID-19) outbreak, were lifted, April 8, 2020. (Photo by Aly Song/Reuters) 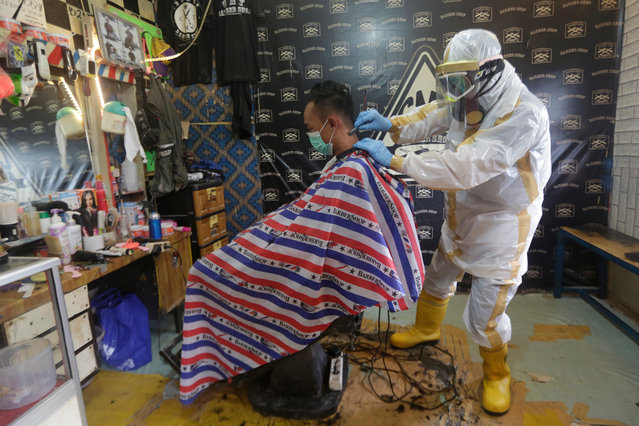 Barber Herman Mulyana (R) gives a haircut to a customer while wearing protective attire made from plastic garbage bags at a barbershop in Bogor, Indonesia, 06 April 2020. The Trade Ministry of Indonesia issued a regulation temporarily recinding all requirements for the import of protective gear and medical equipment, to counter shortages of many items used to treat COVID-19 patients and prevent the further spread of the disease. (Photo by Adi Weda/EPA/EFE) 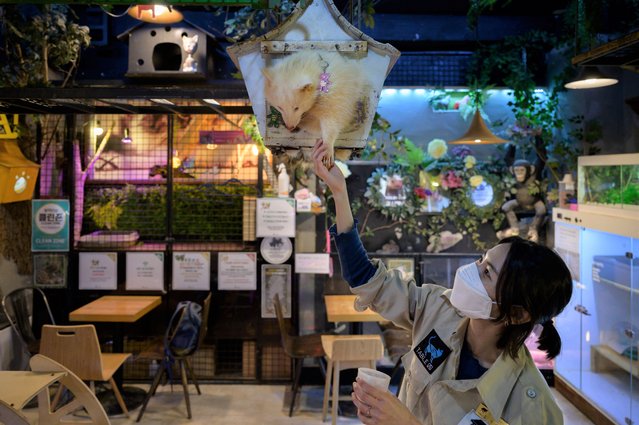 In a photo taken on April 2, 2020 a staff member feeds a raccoon at the Table A Raccoon Cafe in Seoul. Business has been devastated by the coronavirus outbreak, with South Koreans staying at home under social distancing guidelines, and tourism disappearing. But unlike other firms, animal cafes have to stay open so that staff can look after their stock. (Photo by Ed Jones/AFP Photo) 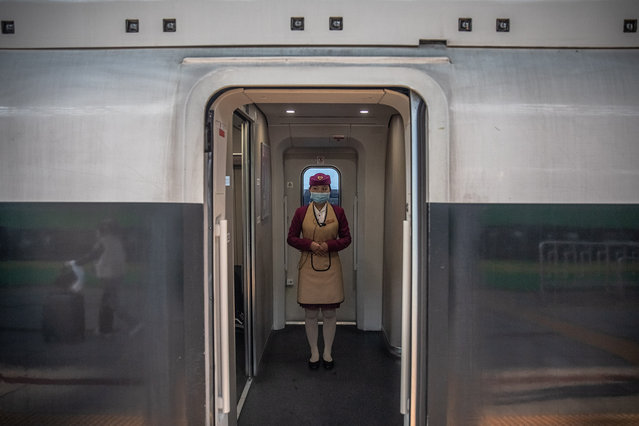 A train attendant wearing a protective face mask stands on a train to Wuhan, at the railway station in Beijing, China, 29 March 2020. Wuhan, the epicenter of the coronavirus outbreak, partly lifted the lockdown allowing people to enter the city after more than two months. Chinese authorities eased the quarantine measures as cases of Covid-19 across China have plummeted, according to Chinese government figures. (Photo by Roman Pilipey/EPA/EFE) 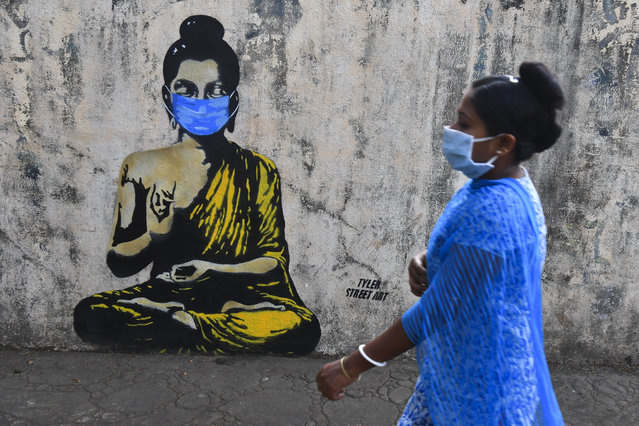 A resident wearing a facemask amid concerns over the spread of the COVID-19 novel coronavirus walks past a graffiti of Buddha wearing facemask, in Mumbai on March 16, 2020. (Photo by Indranil Mukherjee/AFP Photo) 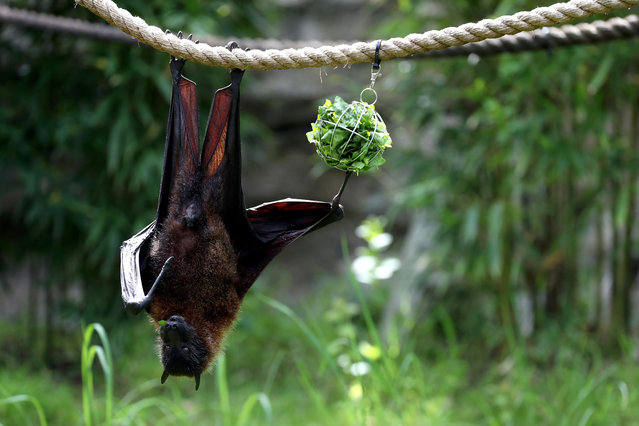 A fruit bat eats lettuce as it hangs from a rope during a behind the scenes interactive live stream from the Oakland Zoo on April 16, 2020 in Oakland, California. Since the Oakland Zoo has been closed to the public during the shelter in place, they are offering a subscription based service that will feature five weekly behind the scenes live streamed interactive programs that will feature animal keepers and their animals. Viewers are able to interact with the keepers by submitting questions to about the animals. (Photo by Justin Sullivan/Getty Images) 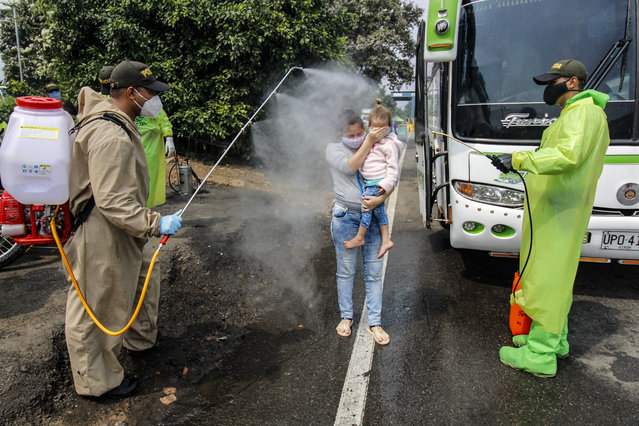 National Police members disinfect Venezuelan citizens returning to the country from Colombia, as a preventive measure against the spread of the coronavirus –COVID19- at the Simon Boliviar International Bridge, in Cucuta, Colombia-Venezuela border, on April 4, 2020. Since the first case of COVID-19 was detected last March 6, Colombia has reported 1,406 people infected and 32 dead. (Photo by Schneyder Mendoza/AFP Photo) 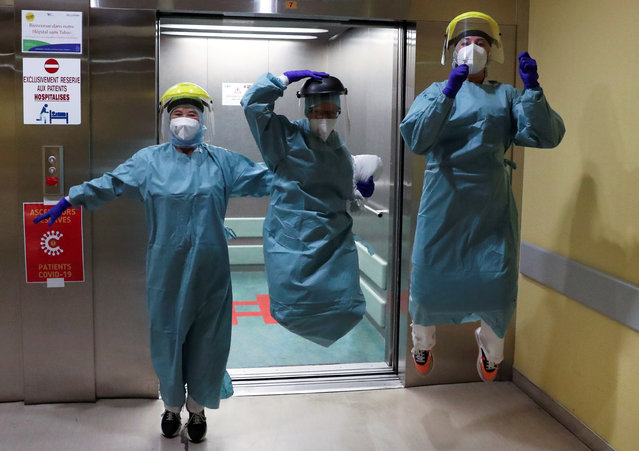 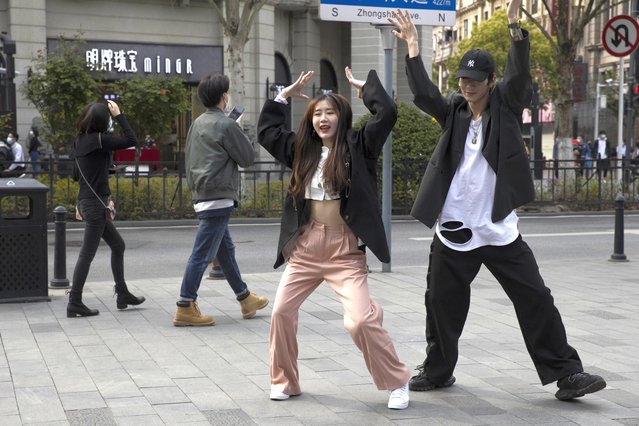 In this Wednesday, April 8, 2020, photo, youths remove their mask to record a dance routine on the streets of Wuhan in central China's Hubei province. Released from their apartments after a 2 1/2-month quarantine, residents of the city where the coronavirus pandemic began are cautiously returning to shopping and strolling in the street but say they still go out little and keep children home while they wait for schools to reopen. (Photo by Ng Han Guan/AP Photo) 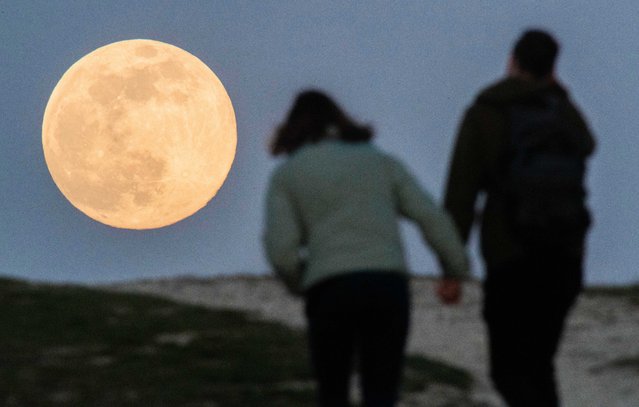 A couple is walking hand-held up Kronsberg, just outside Hanover, Germany on April 7, 2020, when the moon rises on the horizon as the so-called supermoon. The moon reaches its perigee, i.e. the point closest to the Earth's orbit, on the night of 7-8 April as a full moon and therefore appears particularly large to the human observer. (Photo by Julian Stratenschulte/dpa via ZUMA Press) 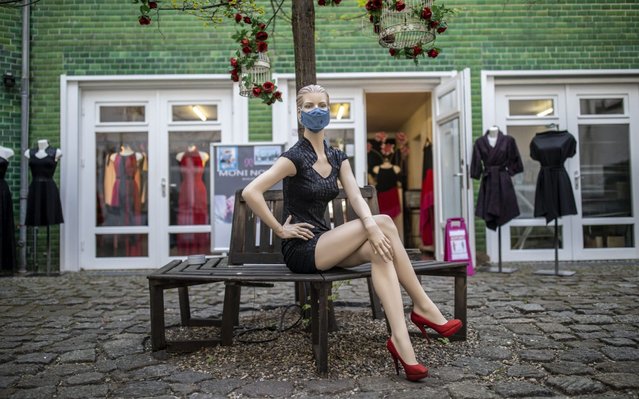 A store mannequin with a protective mask stands before a clothes store as they open for the first time since March during the novel coronavirus (COVID-19) pandemic on April 22, 2020 in Berlin, Germany. Small to midsized-shops are opening across Germany this week as state authorities follow a recommendation by the federal government to ease restrictions imposed in March meant to slow the spread of the coronavirus. Some schools are also planning to reopen soon, as are museums and hair salons in coming weeks. (Photo by Maja Hitij/Getty Images) 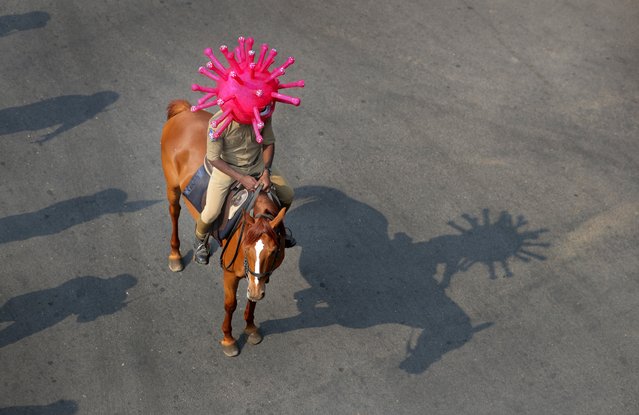