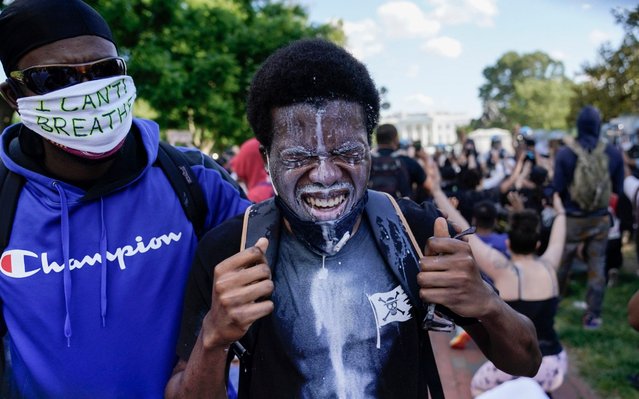 A demonstrator reacts after having milk poured into his eyes during as demonstrators gather to protest the death of George Floyd, Sunday, May 31, 2020, near the White House in Washington. Floyd died after being restrained by Minneapolis police officers. (Photo by Evan Vucci/AP Photo) 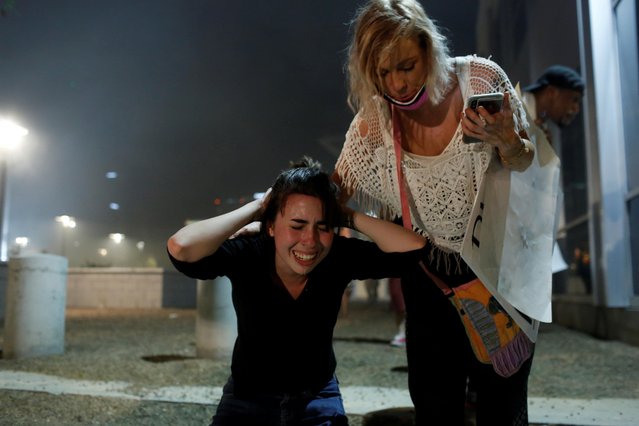 Protesters react to tear gas while they demonstrate against the death in Minneapolis police custody of African-American man George Floyd, and of Dion Johnson, who was killed in Arizona, outside of Phoenix police headquarters after police declare an unlawful assembly in Phoenix, Arizona, U.S. May 29, 2020. (Photo by Nicole Neri/Reuters) 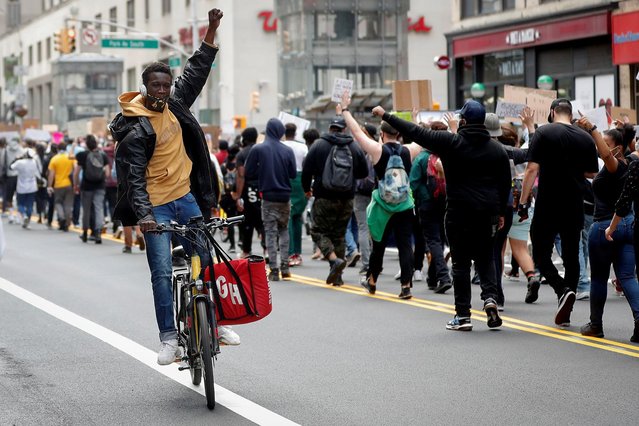 Protesters march against the death in Minneapolis police custody of George Floyd, in the Manhattan borough of New York City, U.S., June 1, 2020. (Photo by Mike Segar/Reuters) 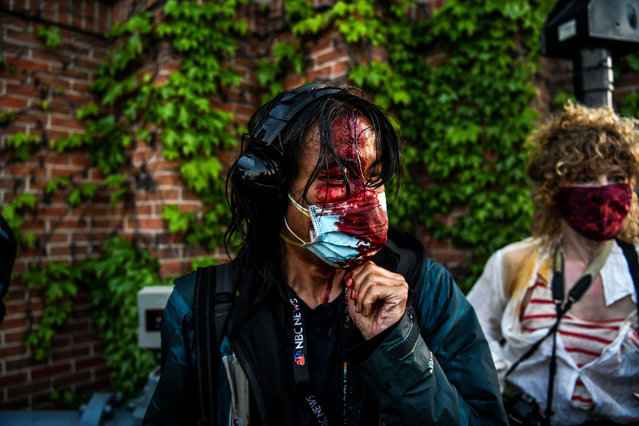 NBC News journalist Ed ou bleeds after police started firing tear gas and rubber bullets near the 5th police precinct following a demonstration to call for justice for George Floyd, a black man who died while in custody of the Minneapolis police, on May 30, 2020 in Minneapolis, Minnesota. Clashes broke out and major cities imposed curfews as America began another night of unrest Saturday with angry demonstrators ignoring warnings from President Donald Trump that his government would stop violent protests over police brutality “cold”. (Photo by Chandan Khanna/AFP Photo) 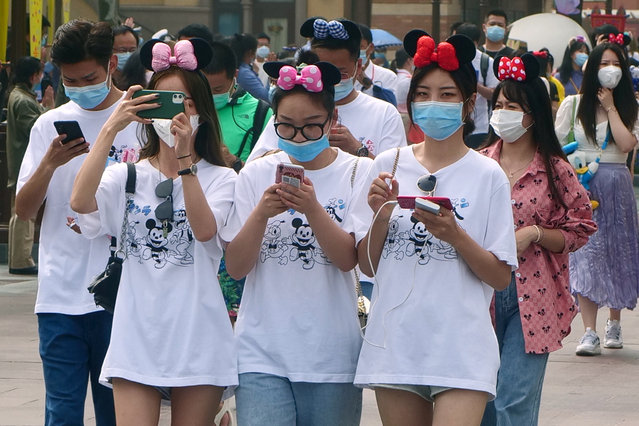 Visitors, wearing face masks, enter the Disneyland theme park in Shanghai as it reopened, Monday, May 11, 2020. Visits will be limited initially and must be booked in advance, and the company said it will increase cleaning and require social distancing in lines for the various attractions. (Photo by Sam McNeil/AP Photo) 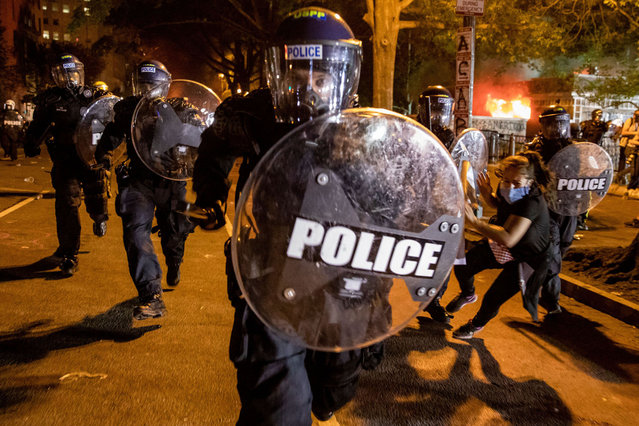 A Police officer charges forward as people protest the death of George Floyd at the hands of Minneapolis Police in front of the White House in Washington, D.C. on May 31, 2020. Thousands of National Guard troops patrolled major US cities after five consecutive nights of protests over racism and police brutality that boiled over into arson and looting, sending shock waves through the country. The death Monday of an unarmed black man, George Floyd, at the hands of police in Minneapolis ignited this latest wave of outrage in the US over law enforcement's repeated use of lethal force against African Americans – this one like others before captured on cellphone video. (Photo by Samuel Corum/AFP Photo) 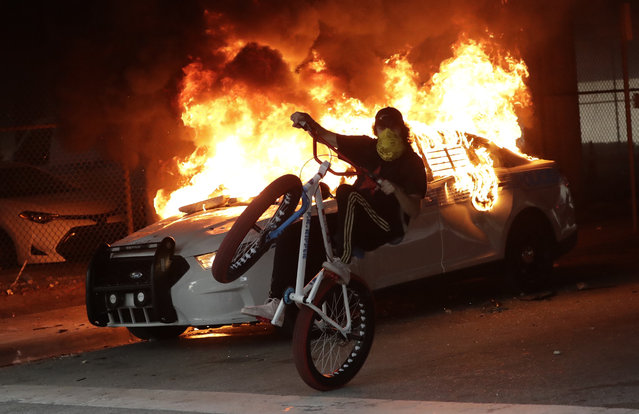 A protester on a bicycle rides past a burning police car during a demonstration next to the city of Miami Police Department, Saturday, May 30, 2020, downtown in Miami. Protests were held throughout the country over the death of George Floyd, a black man who was killed in police custody in Minneapolis on May 25. (Photo by Wilfredo Lee/AP Photo) 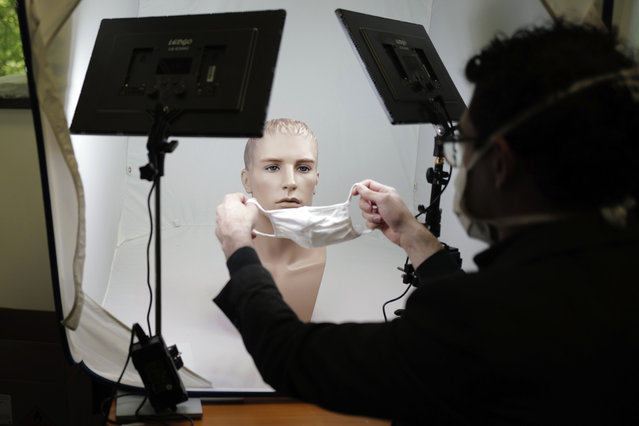 Technician of the French General Armament Directorate, DGA, specialized in research of Bacteriological Chemical and Nuclear military protection gear analyze public masks in their lab at Vert Le Petit, south of Paris, Wednesday, May 6, 2020 as a nationwide confinement continues to counter the COVID-19. The DGA is responsible for giving official stamps of approval for masks being piloted by French companies, vital equipment that will help prevent dissemination and transmission of coronavirus. The DGA approval is not legally obligatory for masks to be sold on French soil. (Photo by Francois Mori/AP Photo) 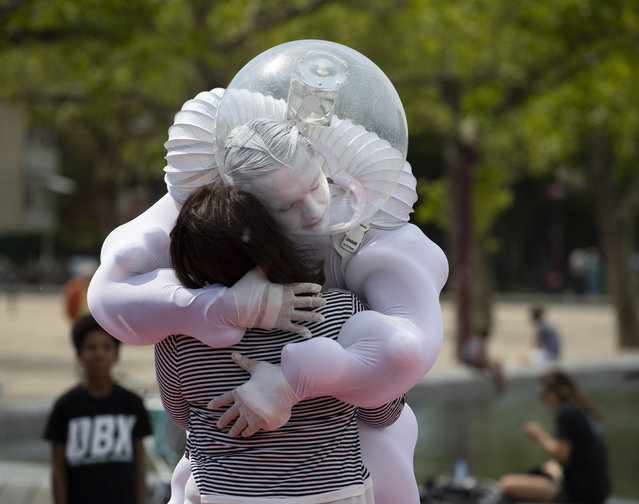 A tourist gets an “Art Hug” from a disinfected costumed man outside the reopened Rijksmuseum in Amsterdam, Netherlands, Monday, June 1, 2020. The government takes a major step to relax the coronavirus lockdown, with bars, restaurants, cinemas and museums reopening under strict conditions. (Photo by Peter Dejong/AP Photo) 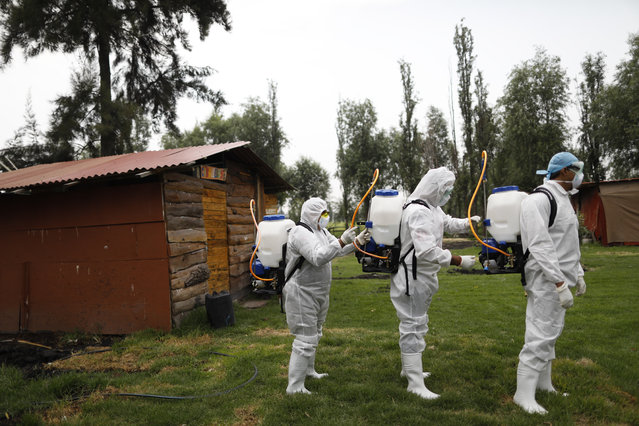 Workers assist each other to holster their sprayers after applying a disinfectant solution on a chinampa, one of the traditional agricultural islands in the Xochimilco district of Mexico City, during a media tour of the borough's sanitation efforts against the new coronavirus, Thursday, May 7, 2020. Health authorities concede that the real number of COVID-19 infections in the densely populated capital is many times higher than the official count, and authorities and experts agree that the worst is yet to come. (Photo by Rebecca Blackwell/AP Photo) 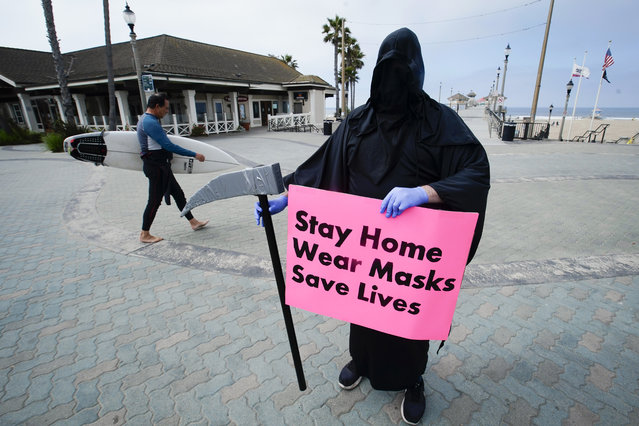 Spencer Kelly, dressed as the grim reaper, demonstrates in favor of the stay-at-home order during the coronavirus pandemic at the pier Friday, May 8, 2020, in Huntington Beach, Calif. (Photo by Chris Carlson/AP Photo) 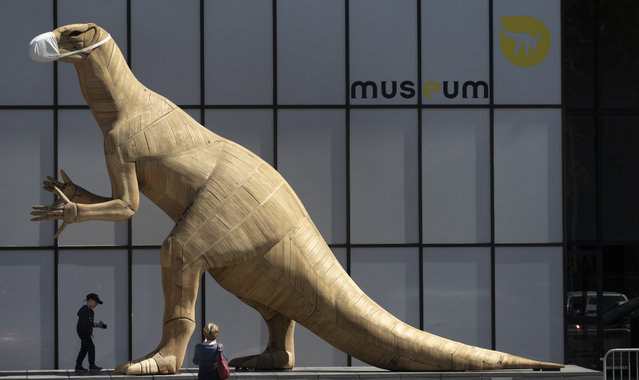 A boy walks by a model of a dinosaur wearing a face mask, during a partial lockdown to prevent the spread of the coronavirus, at the Museum of Natural History in Brussels, Tuesday, May 19, 2020. Museums are hesitantly starting to reopen as the coronavirus lockdown measures are relaxed, yet experts say that one in eight in the world could potentially face permanent closure because of the pandemic. (Photo by Virginia Mayo/AP Photo) 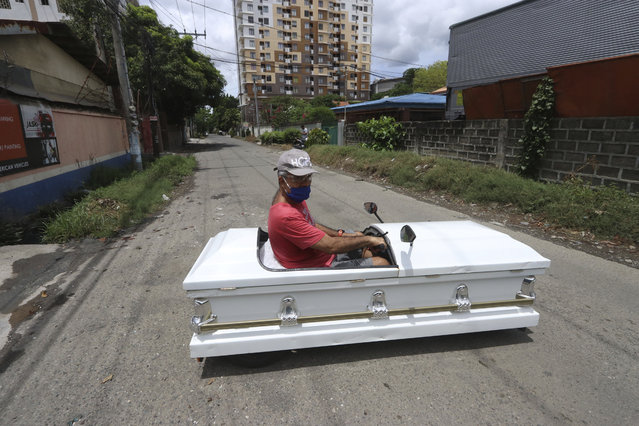 Gabriel Berendo, a businessman and car enthusiast, drives a casket converted into a car on Sunday May 31, 2020 in Cebu city, central Philippines as he goes around streets to remind residents to stay at home as lockdown measures to prevent the spread of the new coronavirus eases next week. (Photo by AP Photo/Stringer) 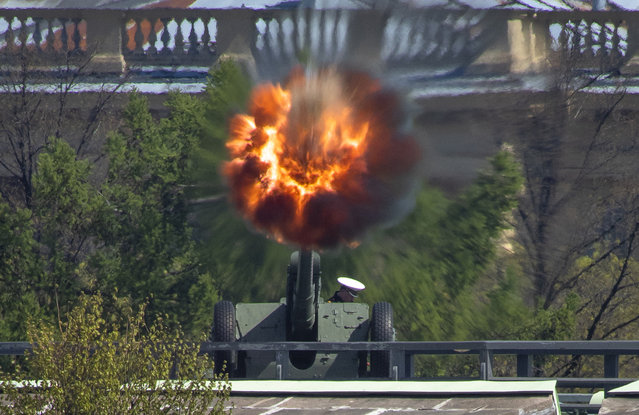 A Navy officer fires a cannon midday shot in the Saint Peter and Paul Fortress in St.Petersburg, Russia, Sunday, May 24, 2020. (Photo by Dmitri Lovetsky/AP Photo) 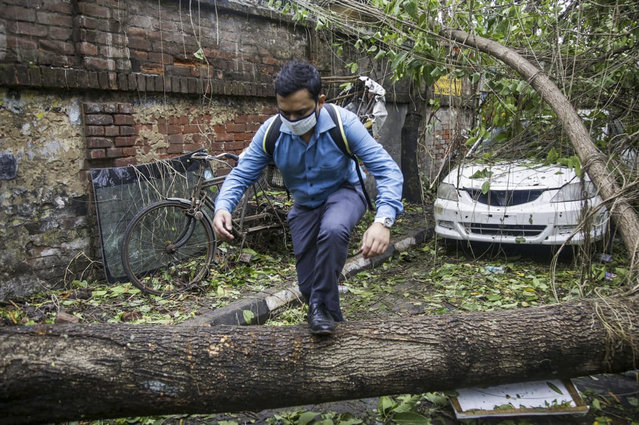 A man makes his way tpast a tree fallen in the middle of a road after Cyclone Amphan hit the region in Kolkata, India, Thursday, May 21, 2020. A powerful cyclone ripped through densely populated coastal India and Bangladesh, blowing off roofs and whipping up waves that swallowed embankments and bridges and left entire villages without access to fresh water, electricity and communications. (Photo by Bikas Das/AP Photo) 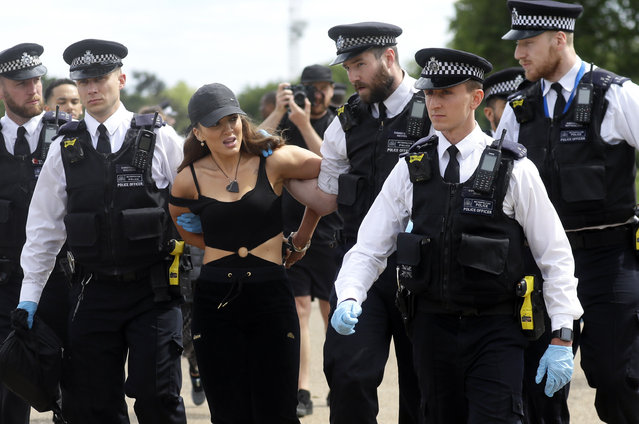 A woman is arrested during a mass gathering protest organised by the group called 'UK Freedom Movement', in Hyde Park in London as the country is in lockdown to help stop the spread of coronavirus, Saturday, May 16, 2020. The group claims that the coronavirus lockdown is illegal. (Photo by Kirsty Wigglesworth/AP Photo) 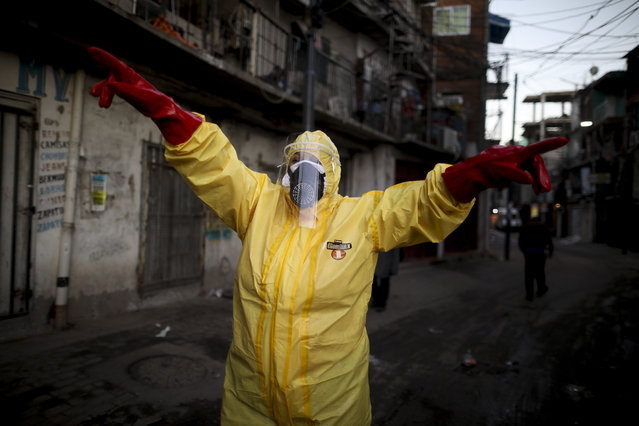 In this Monday, May 18, 2020 file photo, Jimena Aballe directs her neighbors as they disinfect their own streets in the Villa 31 neighborhood to curb the spread of COVID-19 in Buenos Aires. Winter is ending in the Southern Hemisphere and country after country – South Africa, Australia, Argentina – had a surprise: Their steps against COVID-19 also apparently blocked the usual flu epidemic. (Photo by Natacha Pisarenko/AP Photo) 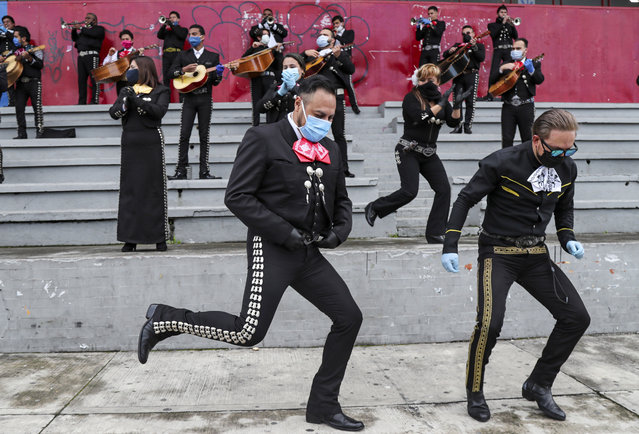 Musicians from Mariachi groups perform during an event to ask authorities to allow them to work on the upcoming Mother's Day in Quito, Ecuador, Tuesday, May 5, 2020. The government ordered in mid-march a national lockdown to control the spread of the new coronavirus. (Photo by Dolores Ochoa/AP Photo) 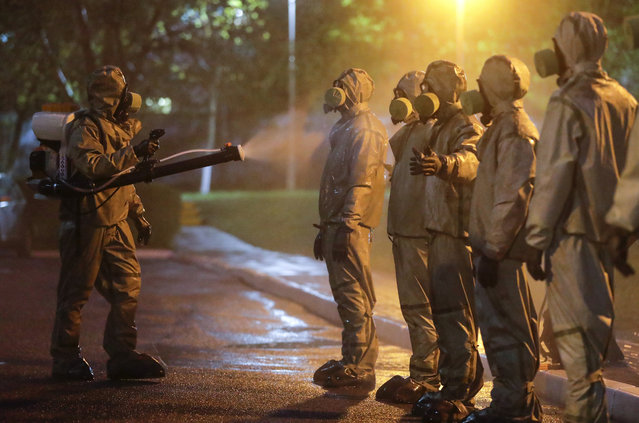 Servicemen of Belarus Ministry of Defence wearing protective gear spray disinfectant on each other after disinfecting a hospital in Minsk, Belarus, Tuesday, May 5, 2020. Despite the World Health Organization's call for Belarus to ban public events as coronavirus cases rise sharply, President Alexander Lukashenko says the country will go ahead with a parade to mark the 75th anniversary of the defeat of Nazi Germany. (Photo by Sergei Grits/AP Photo) 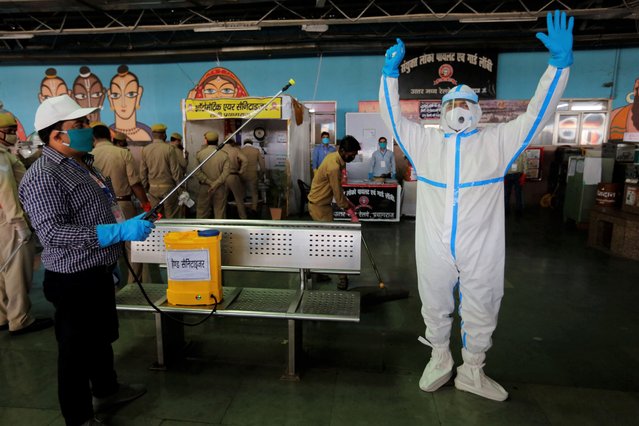