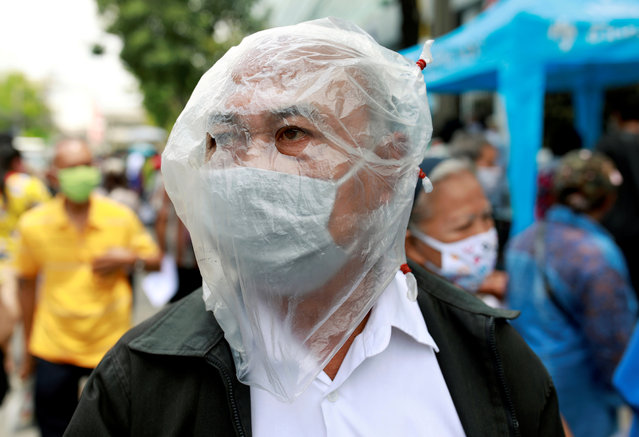 A man affected by the government's measures against the spread of the coronavirus disease (COVID-19) wears a protective face covering as he lines up for filing forms to request three months of monthly financial aid from the government in front of the Finance Ministry in Bangkok, Thailand, May 1, 2020. (Photo by Soe Zeya Tun/Reuters) 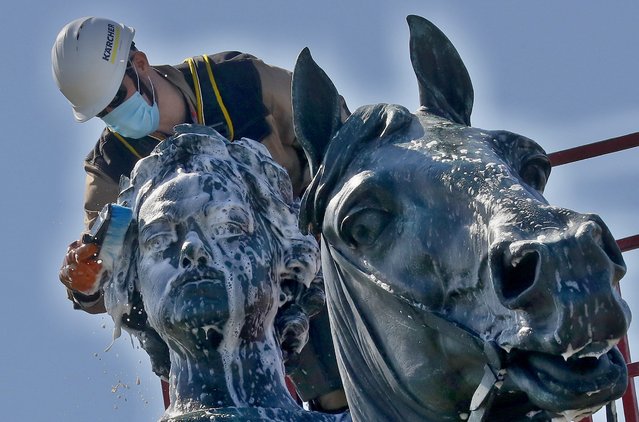 A municipal worker cleans the monument of Tsar Peter The Great from a crane during preparations for the City Day in St. Petersburg, Russia, 26 May 2020. St. Petersburg will celebrate its 317th anniversary on 27 May. (Photo by Anatoly Maltsev/EPA/EFE) 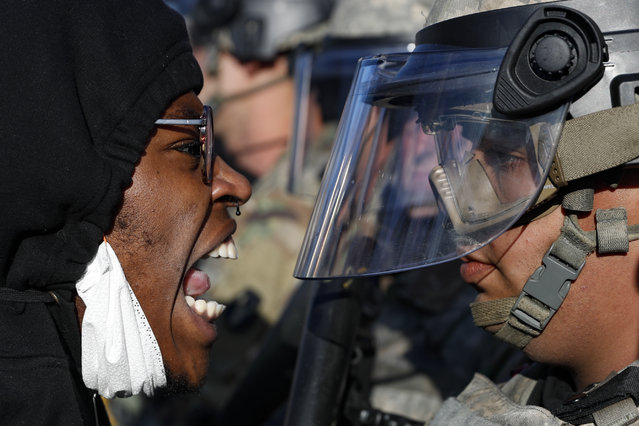 Protesters and National Guardsmen face off on East Lake Street, Friday, May 29, 2020, in St. Paul, Minn. The massive protests sweeping across U.S. cities following the police killing of a black man in Minnesota have elevated fears of a new surge in cases of the coronavirus. Images showing thousands of screaming, unmasked protesters have sent shudders through the health community, who worry their calls for social distancing during the demonstrations are unlikely to be heard. (Photo by John Minchillo/AP Photo) 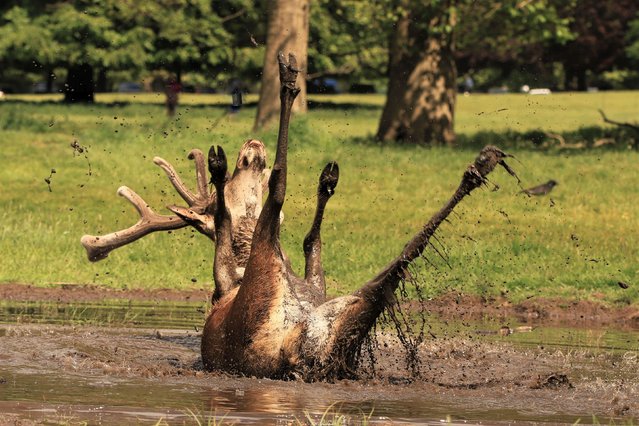 A red deer stag takes a mud bath in Wollaton Park near Nottingham, England on May 23, 2020. Gareth Williams, who took the photograph, said it was a “once in a lifetime shot”. (Photo by Gareth Williams/Kennedy News) 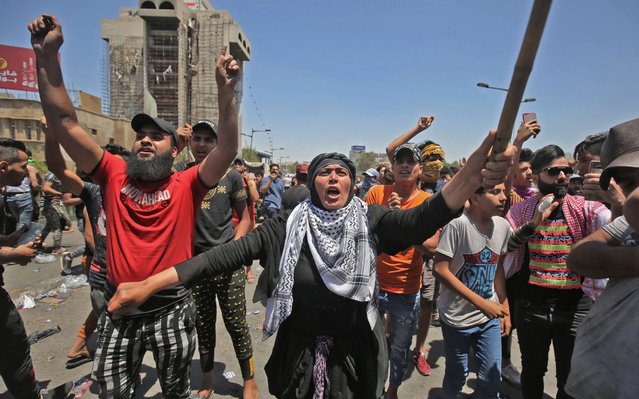 A woman shouts slogans as she takes part with Iraqi protesters in an an anti-government demonstration on Al-Jumhuriyah bridge in the capital Baghdad, on May 10, 2020. Modest anti-government rallies resumed in some Iraqi cities today, clashing with security forces and ending months of relative calm just days after Prime Minister Mustafa Kadhemi's government came to power. (Photo by Ahmad al-Rubaye/AFP Photo) 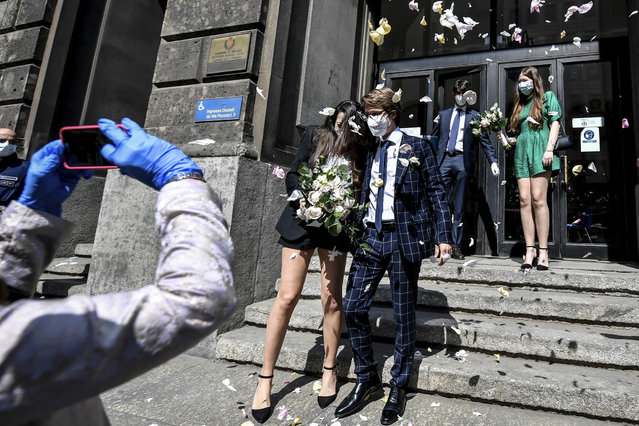 A just married couple is celebrated by friends as they leave the registry offices after the civil ceremony in Milan, Italy, Friday, May 8, 2020. The municipality of Milan restarted celebrating civil marriages Thursday, as the city is slowly returning to life after the long shutdown due to the coronavirus outbreak. Access to the ceremony is only allowed for best men. (Photo by Claudio Furlan/LaPresse via AP Photo) 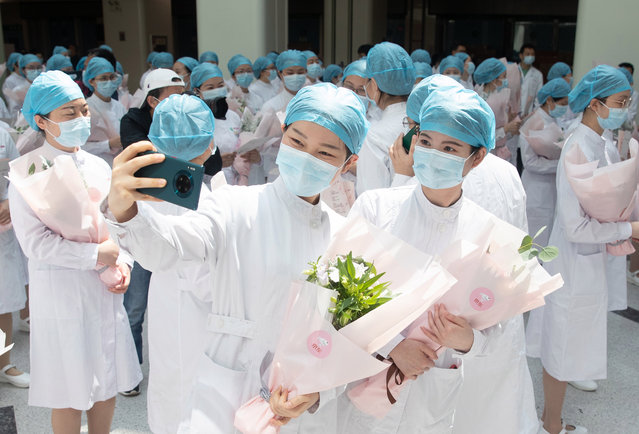 Chinese nurses take a selfie with a mobile phone during a ceremony celebrating International Nurses Day at Tongji Hospital in Wuhan, Hubei province, China, 12 May 2020. International Nurses Day is marked on 12 May, the anniversary of Florence Nightingale's birth, as health workers around the world face unprecedented risks combating the Covid-19 coronavirus outbreak. (Photo by EPA/EFE/China Stringer Network) 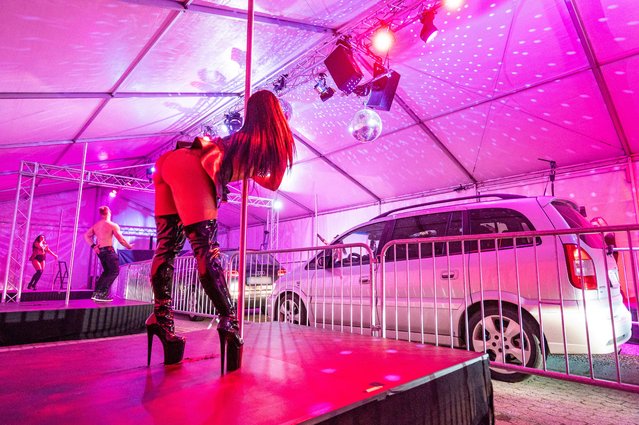 Dancers stand in strip-drive-in on stages in front of cars in Landshut, Bavaria on May 29, 2020. In the Strip-Drive-In the car passengers can admire the strippers at the prescribed minimum distance. The shows take place on Friday and Saturday between 11pm and 3am local time and cost €35. Motorists are allowed into the tent but only for around 15 minutes. (Photo by Armin Weigel/dpa) 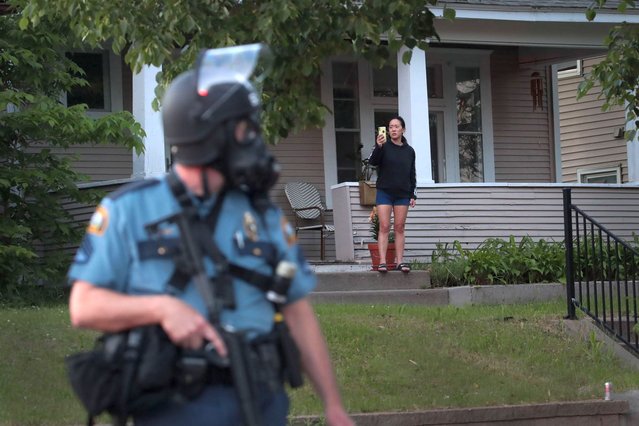 A police officer keeps watch during a protest as a woman looks on May 28, 2020 in St. Paul, Minnesota. Today marks the third day of ongoing protests after the police killing of George Floyd. Four Minneapolis police officers have been fired after a video taken by a bystander was posted on social media showing Floyd's neck being pinned to the ground by an officer as he repeatedly said, “I can’t breathel”. Floyd was later pronounced dead while in police custody after being transported to Hennepin County Medical Center. (Photo by Scott Olson/Getty Images) 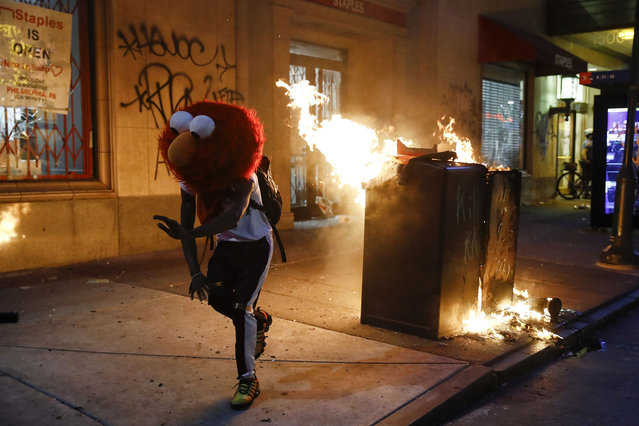 A protester in an Elmo mask dances during the Justice for George Floyd Philadelphia Protest on Saturday, May 30, 2020. Demonstrators took to the streets across the United States to protest the death of Floyd, a black man who was killed in police custody in Minneapolis on May 25. (Photo by Matt Rourke/AP Photo) 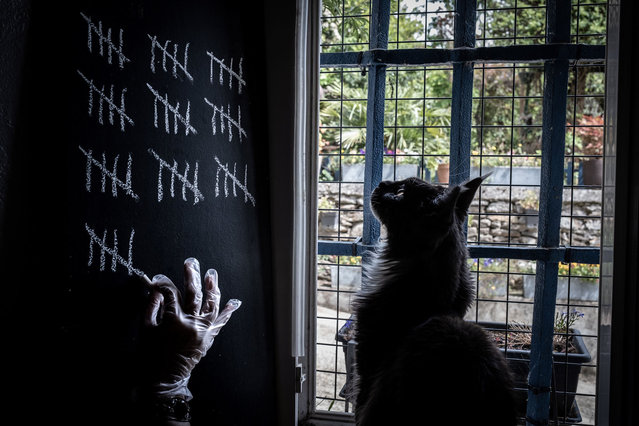 A person, watched by his cat, marks the days spent in confinement in his home in Givors near Lyon, France, on May 5, 2020. (Photo by Jean-Philippe Ksiazek/AFP Photo) 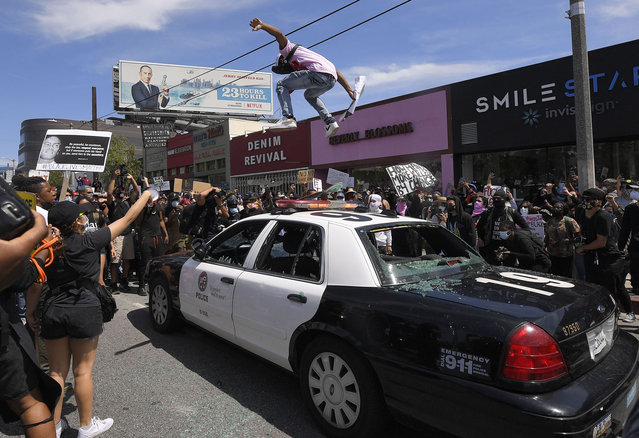 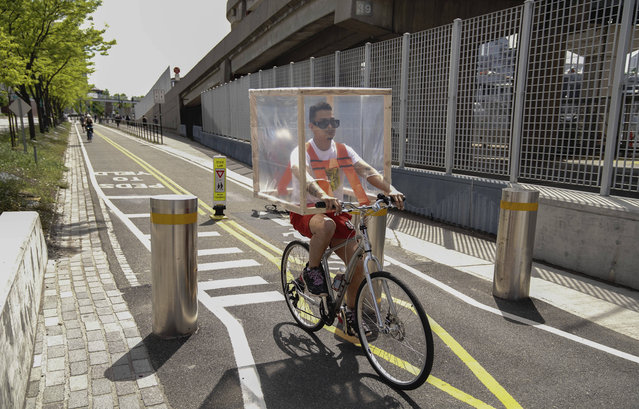 A view of a person with his DIY protection while cycling at Hudson Bicycle Path during the coronavirus pandemic on May 16, 2020 in New York City. COVID-19 has spread to most countries around the world, claiming over 308,000 lives with over 4.6 million infections reported. (Photo by John Nacion/STAR MAX/IPx) 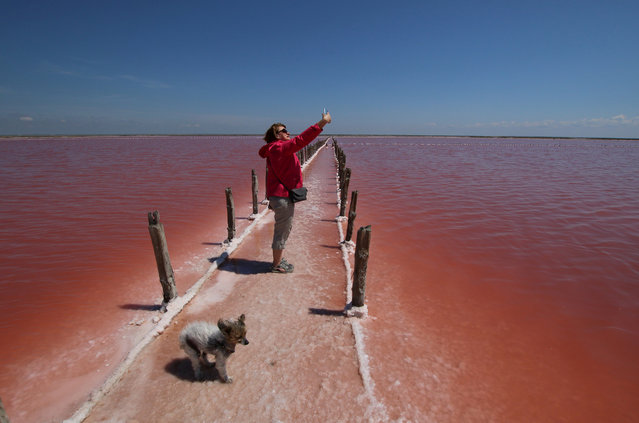 A woman takes a selfie at a salt production site on the bed of a drained area of the Sasyk-Sivash lake near the city of Yevpatoria, Crimea on May 31, 2020. (Photo by Alexey Pavlishak/Reuters) 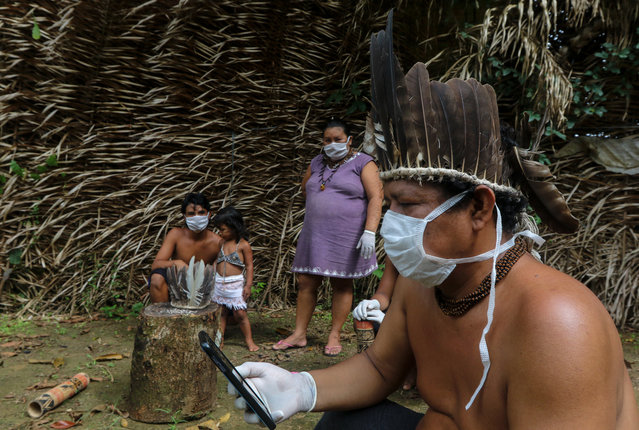 Satere-mawe indigenous people are seen using a smartphone to contact a doctor in Sao Paulo state to receive medical guidance amid the COVID-19 novel coronavirus pandemic at the Sahu-Ape community, 80 km of Manaus, Amazonas State, Brazil, on May 5, 2020. The Brazilian state of Amazonas, home to most of the country's indigenous people, is one of the regions worst affected by the pandemic, with more than 500 deaths to date according to the health ministry. (Photo by Ricardo Oliveira/AFP Photo) 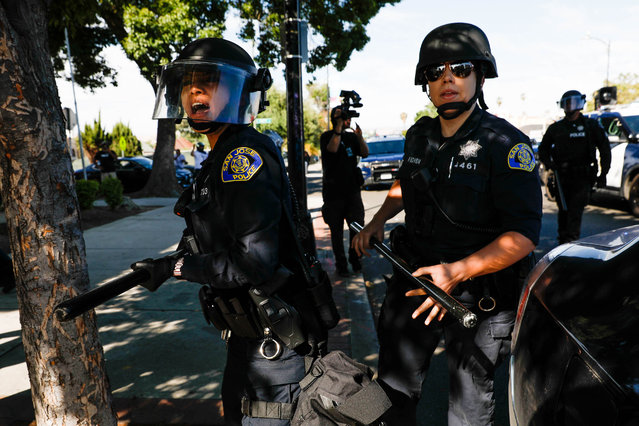 Police try to push protesters back on East Santa Clara Street during a protest decrying the police killing of George Floyd in downtown San Jose on Friday, May 29, 2020. (Photo by Randy Vazquez/Bay Area News Group) 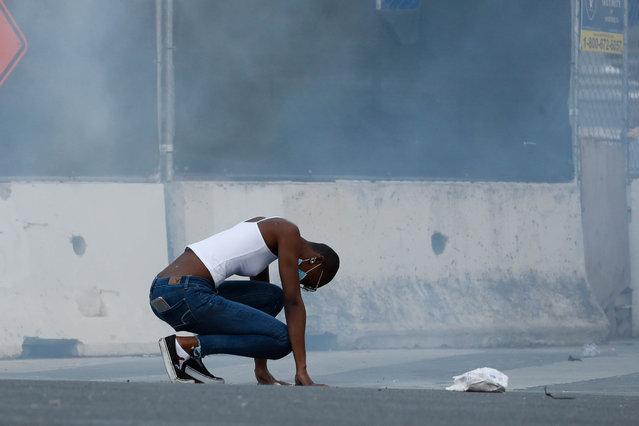 A protester tries to catch their breath on East Santa Clara Street during a protest decrying the police killing of George Floyd in downtown San Jose on Friday, May 29, 2020. (Photo by Randy Vazquez/Bay Area News Group) 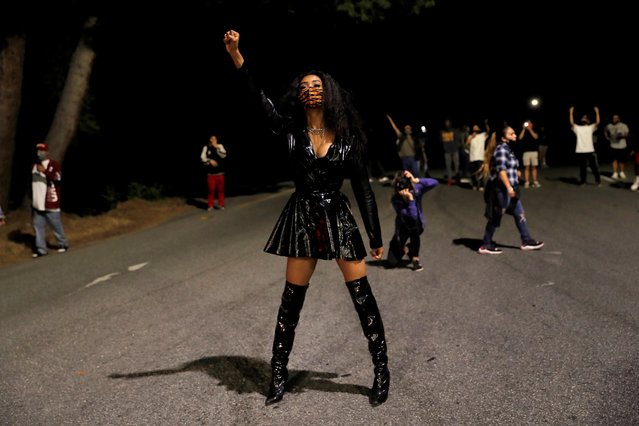 A protester raises her fist at the entrance of Highway 280 and S. 4th St. as people protest the killing of George Floyd in Minneapolis in downtown San Jose, Calif., on Friday, May 29, 2020. (Photo by Nhat V. Meyer/Bay Area News Group) 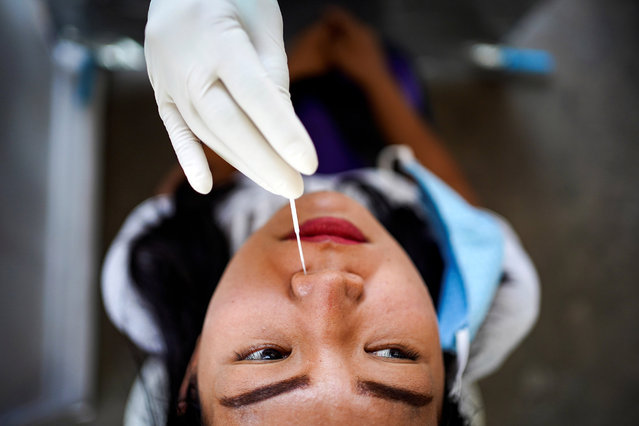 A nose swab test is performed on a local resident of a community in Bangkok, amid the coronavirus disease (COVID-19) outbreak in Thailand, April 28, 2020. (Photo by Athit Perawongmetha/Reuters) 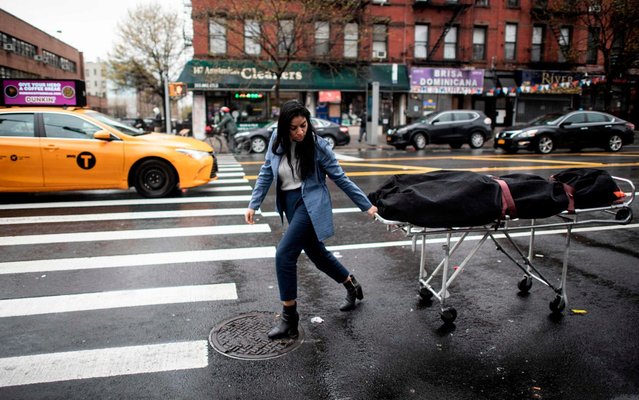 Alisha Narvaez Manager at International Funeral & Cremation Services transports a body to the funeral home on April 24, 2020 in the Harlem neighborhood of New York City. For many families already in distress, finding a funeral home in New York that will accept the body of a loved one is a headache; in Harlem, International Funeral home tries not to turn anyone away, even if it means being under stress. (Photo by Johannes Eisele/AFP Photo)
Edit Del
14 Jan 2021 00:05:00, post received 0 comments
Publication archive:
←   →
Popular tags:
All tags
Last searches: