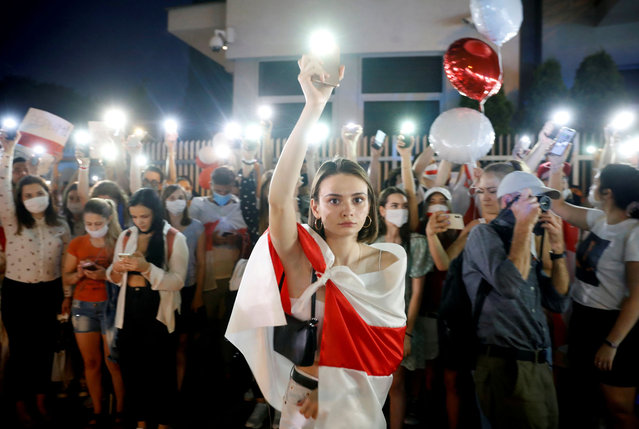 A demonstrator holds up her phone during a march in solidarity with Belarusian people after the presidential election, outside the Belarusian Embassy in Warsaw, Poland, August 14, 2020. (Photo by Kacper Pempel/Reuters) 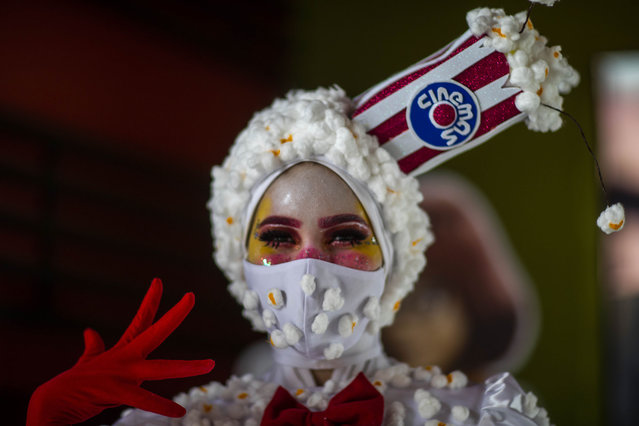 An employee in a costume poses during the reopening of a movie theater in Managua on August 28, 2020. Movie theaters reopened in Nicaragua after months of being closed due to the new coronavirus pandemic. (Photo by Inti Ocon/AFP Photo) 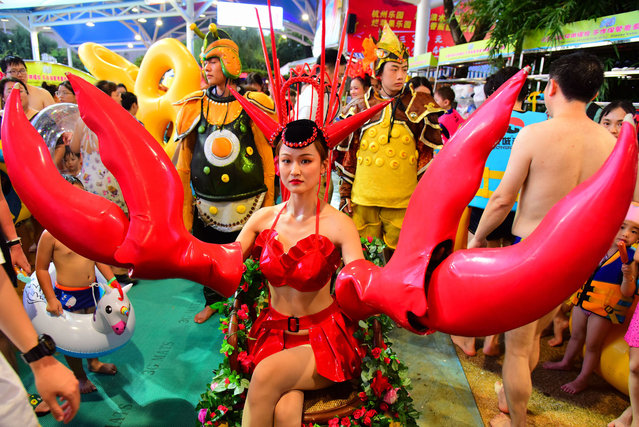 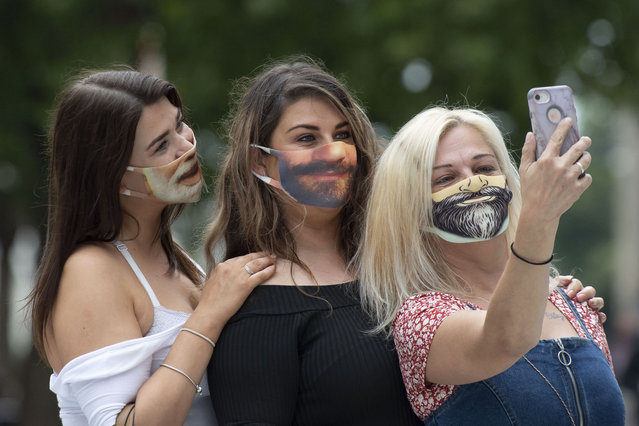 Three women wearing novelty masks with beard prints take a selfie on Queen Street on August 4, 2020 in Cardiff, United Kingdom. Coronavirus lockdown measures continue to be eased as the number of excess deaths in Wales falls below the five-year average. From this week up to 30 people can meet outdoors and pubs, restaurants and cafes can open to customers indoors. (Photo by Matthew Horwood/Getty Images) 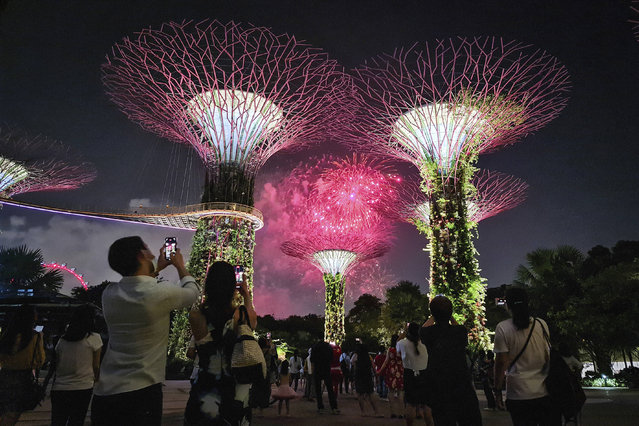 People at the Gardens by the Bay's Supertree Grove, taking photographs of the fireworks display which was part of National Day Parade, 9 August 2020. (Photo by Singapore Press via AP Images) 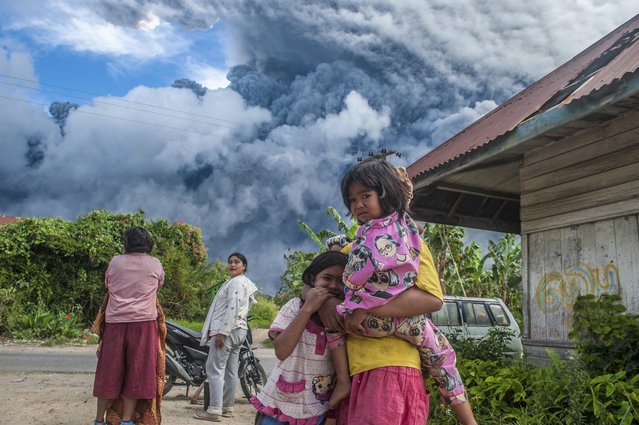 Indonesia's Mount Sinabung erupts, sending a column of volcanic materials as high as 16,000 feet into the sky on August 10, 2020. The volcano, one of two currently erupting in Indonesia, was dormant for four centuries before exploding in 2010, killing two people. Another eruption in 2014 killed 16 people, while seven died in a 2016 eruption. (Photo by Sutanta Aditya/Abaca/Sipa USA via AP Images) 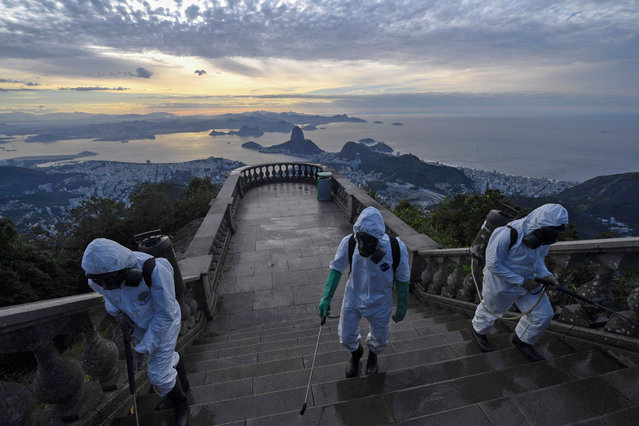 Soldiers of the Brazilian Armed Forces are seen during the disinfection procedures of the Christ The Redeemer statue at the Corcovado mountain prior to the opening of the touristic attraction on August 15, in Rio de Janeiro, Brazil, on August 13, 2020, amid the COVID-19 novel coronavirus pandemic. (Photo by Mauro Pimentel/AFP Photo) 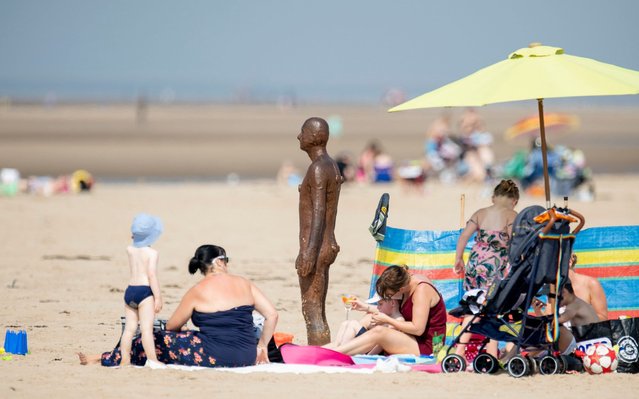 People and a statue are seen on Crosby Beach as the spread of the coronavirus disease (COVID-19) continues, Crosby, Britain on August 13, 2020. (Photo by Peter Powell/The Telegraph) 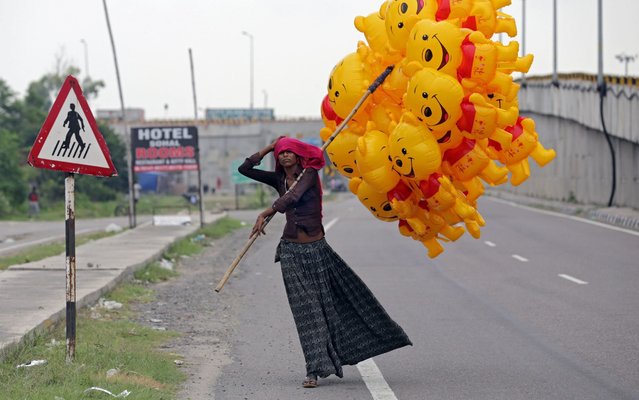 A vendor adjusts her scarf as she sells Winnie the Pooh cartoon-shaped balloons on a highway during the weekend lockdown in Amritsar, India, 30 August 2020. Another lockdown was imposed by the state government to control the spread of novel coronavirus which causes the Covid19 disease. (Photo by Raminder Pal Singh/EPA/EFE/Rex Features/Shutterstock) 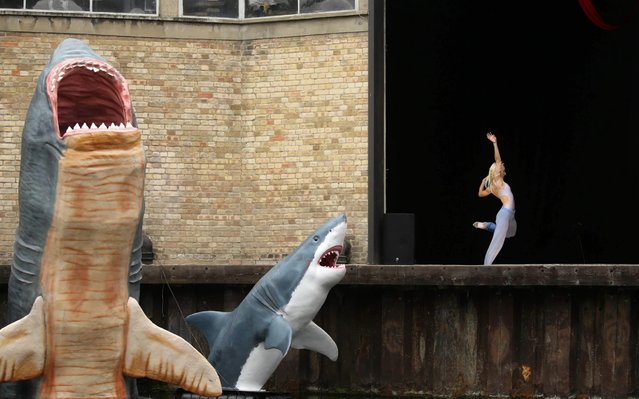 Dancers from The Royal Ballet perform beside the Regent's Canal in London on August 30, 2020, one of three performances they put on daily on weekends to experience performing in front of a live socially-distanced audience. (Photo by Isabel Infantes/AFP Photo) 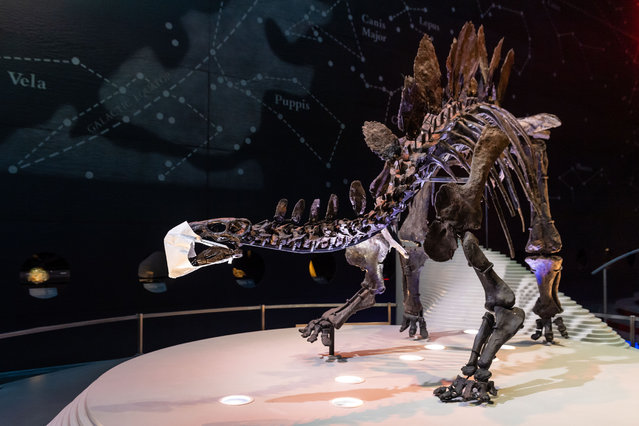 A fossilised skeleton of a Stegosaurus Dinosaur is pictured wearing a face mask before the reopening of the Natural History Museum on August 5, 2020 in London, England. The museum closed for 5 months due to COVID-19. (Photo by Ian Gavan/Getty Images) 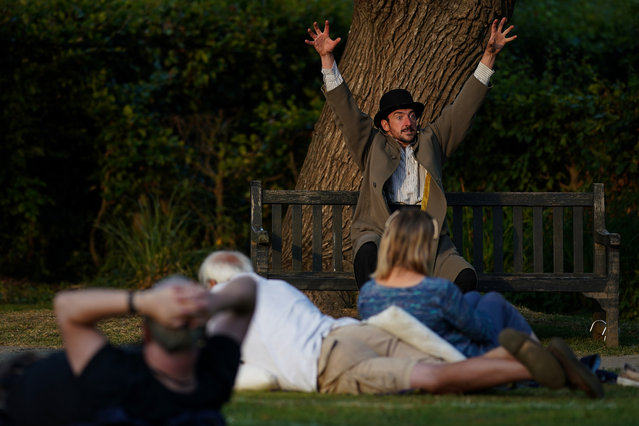 Actor Chris Hannon from the Park Bench Theatre performs Samuel Beckett’s “First Love” during an open air play in a socially distanced covid secure space in Rowntree Park on August 12, 2020 in York, England. As coronavirus lockdown restrictions are eased in many areas, the theatre and the arts sectors begin to re-start their businesses. “First Love” is a short story by Samuel Beckett, written in 1946 and first published in its original French version in 1970 and, in Beckett's English translation, in 1973. The Park Bench Theatre season is being presented by Engine House Theatre. (Photo by Ian Forsyth/Getty Images) 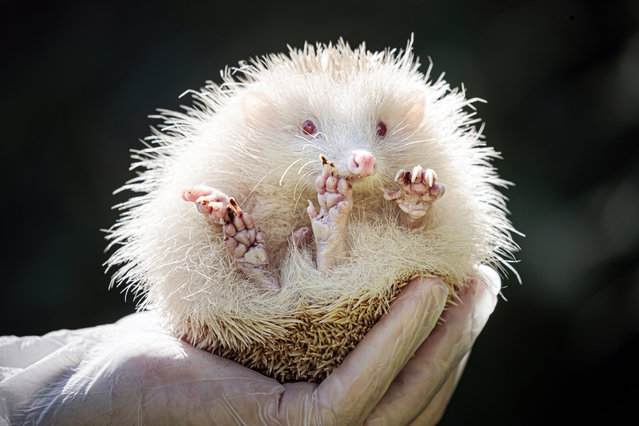 Jack Frost, an ultra rare albino Hedgehog, that has been rescued by Prickly Pigs Hedgehog Rescue in Otley, West Yorkshire on August 23, 2020. (Photo by Danny Lawson/PA Images via Getty Images) 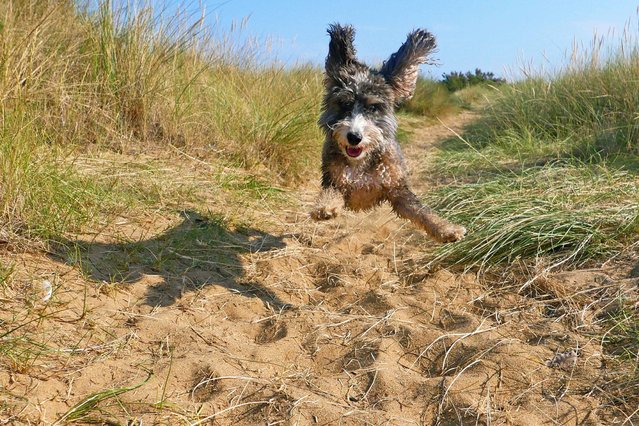 Cookie the cockapoo enjoying a run on the beach in Heacham, Norfolk, England on August 8, 2020. (Photo by Paul Marriott/The Times) 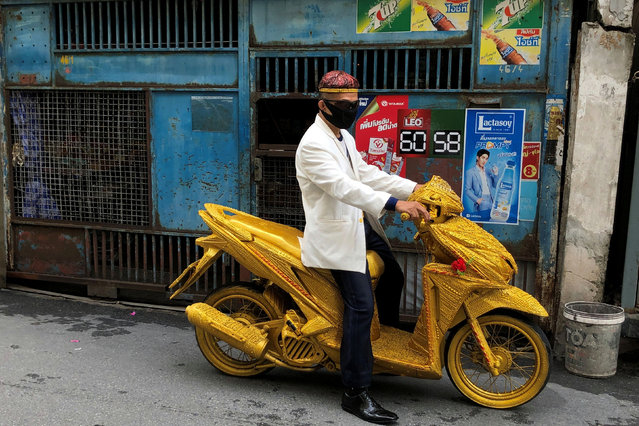 A man rides a golden motorbike on a street in Bangkok, Thailand on August 14, 2020. (Photo by Jorge Silva/Reuters) 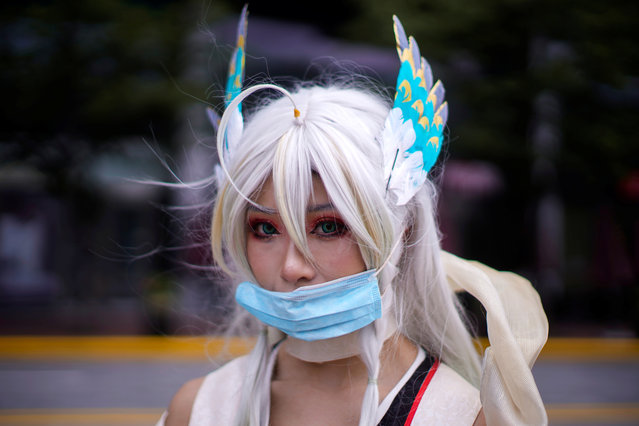 A cosplayer wearing a face mask poses for a picture at the China Digital Entertainment Expo and Conference (ChinaJoy) in Shanghai, following the coronavirus disease (COVID-19) outbreak, China on July 31, 2020. (Photo by Aly Song/Reuters) 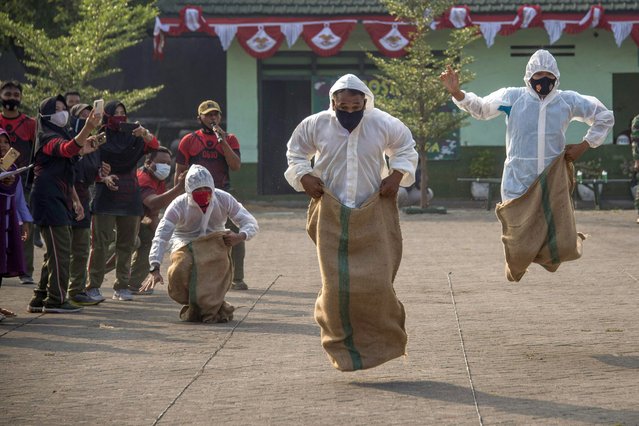 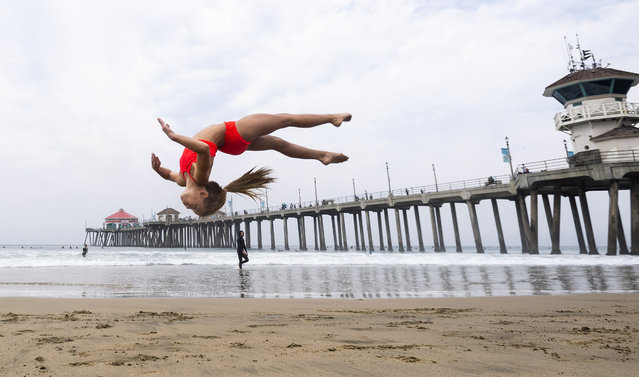 A student works on her skills during an acrobatics class near the pier in Huntington Beach, CA on Monday, August 17, 2020. Instructors at the Orange County Performing Arts Academy decided to bring the class to the beach from Anaheim Hills to beat the heat and give the students an end of the summer treat. (Photo by Paul Bersebach/The Orange County Register via AP Photo) 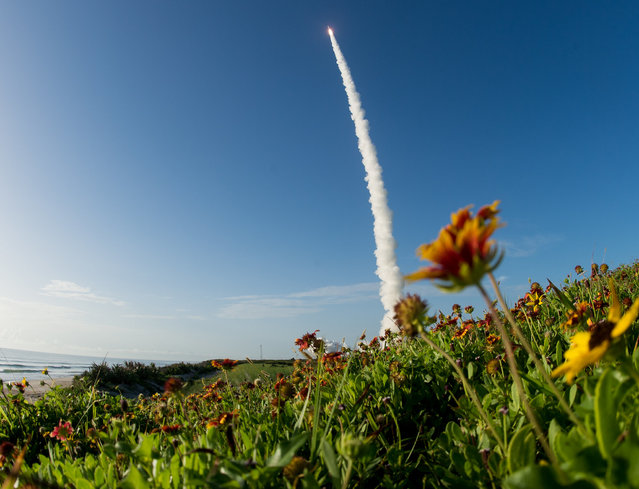 This NASA photo shows a United Launch Alliance Atlas V rocket with NASA’s Mars 2020 Perseverance rover onboard as it launches from Space Launch Complex 41 at Cape Canaveral Air Force Station, on July 30, 2020, from NASA’s Kennedy Space Center in Florida. The Perseverance rover is part of NASA’s Mars Exploration Program, a long-term effort of robotic exploration of the Red Planet. (Photo by Joel Kowsky/NASA) 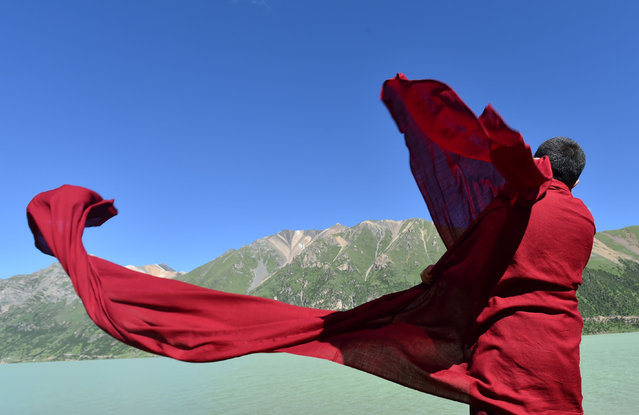