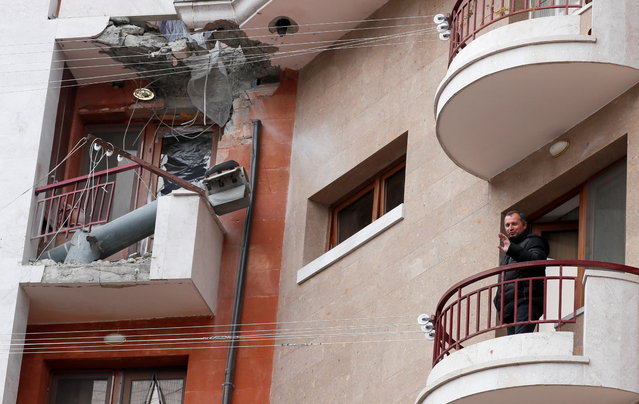 A local resident speaks as he stands near a missile case on a balcony of a residential building in Stepanakert in the region of Nagorno-Karabakh, November 16, 2020. (Photo by Reuters/Stringer) 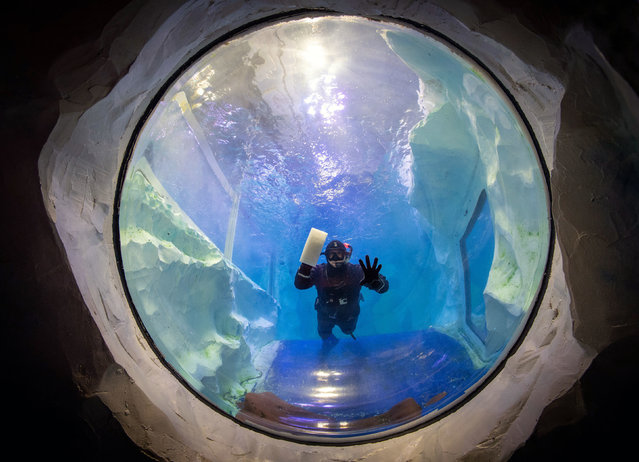 Animal care team member Simon Champion cleans the inside of the penguin pool at the National SEA LIFE Centre in Birmingham, England on November 17, 2020. (Photo by Joe Giddens/PA Images via Getty Images) 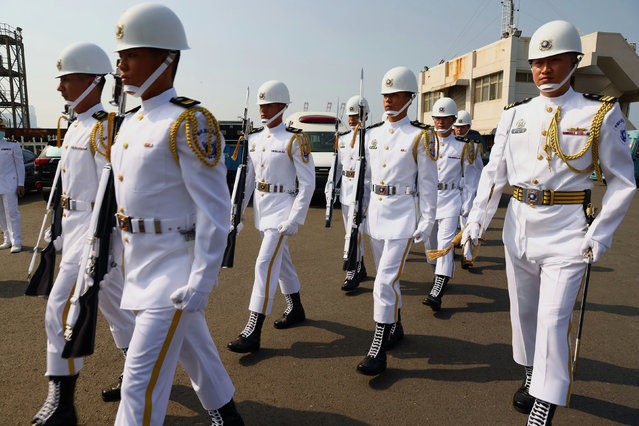 Navy Honor Guards are seen at the ceremony for the start of construction of a new submarine fleet in Kaohsiung, Taiwan, November 24, 2020. (Photo by Ann Wang/Reuters) 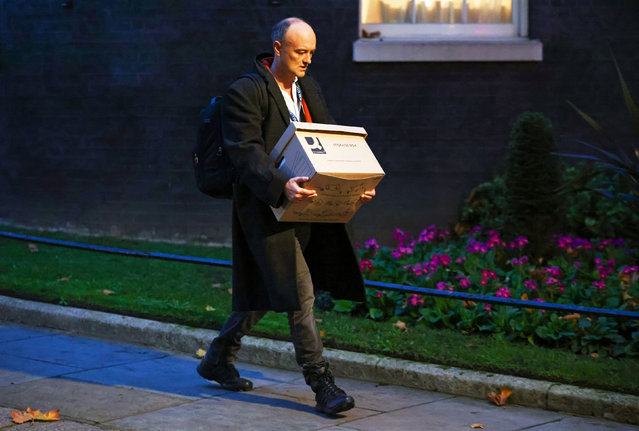 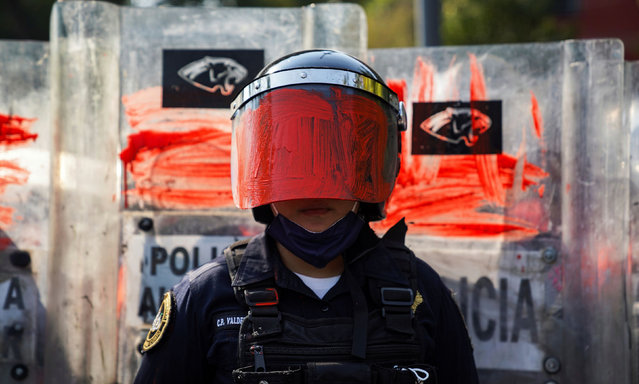 A riot police officer is seen after her helmet visor was painted red by a member of a feminist collective during a protest against gender and police violence, in Mexico City, Mexico on November 11, 2020. (Photo by Toya Sarno Jordan/Reuters) 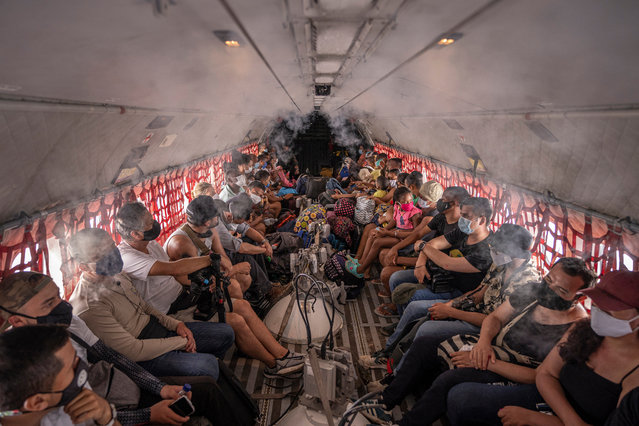 Residents of Providencia sit in a Colombia army plane with their belongings as they are being evacuated on November 21, 2020 in Providencia Island, Colombia. The islands of San Andres, Providencia and Santa Catalina were hit by Hurricane Iota in the early hours of Monday 16th as a category 5 storm, the strongest to affect the country since records are kept. The islands' economy depends on the tourism industry which has been suffering due to coronavirus restrictions since March. According to official sources, 98% of the Providencia Island infrastructure was destroyed by Iota's winds. President Duque, now visiting San Andres Island, contacted the US government for humanitarian help and assistance in hurricane crisis management. (Photo by Diego Cuevas/Getty Images) 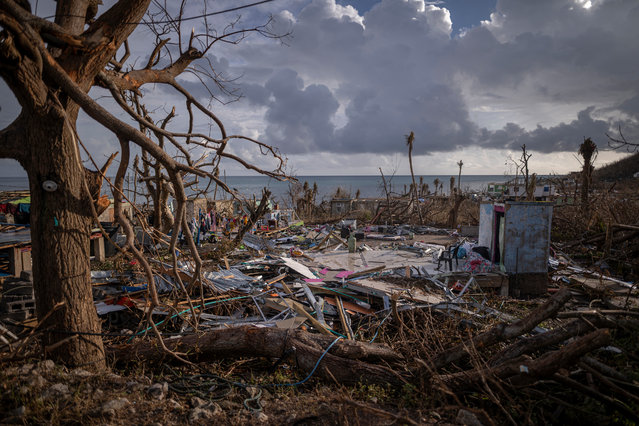 View of the destruction on November 23, 2020 at La Montaña sector in Providencia Island, Colombia. The islands of San Andres, Providencia and Santa Catalina were hit by Hurricane Iota in the early hours of Monday 16th as a category 5 storm, the strongest to affect the country since records are kept. The islands' economy depends on the tourism industry which has been suffering due to coronavirus restrictions since March. According to official sources, 98% of the Providencia Island infrastructure was destroyed by Iota's winds. President Duque contacted the US government for humanitarian help and assistance in hurricane crisis management during his visit to Providencia and San Andres island in the past week. (Photo by Diego Cuevas/Getty Images) 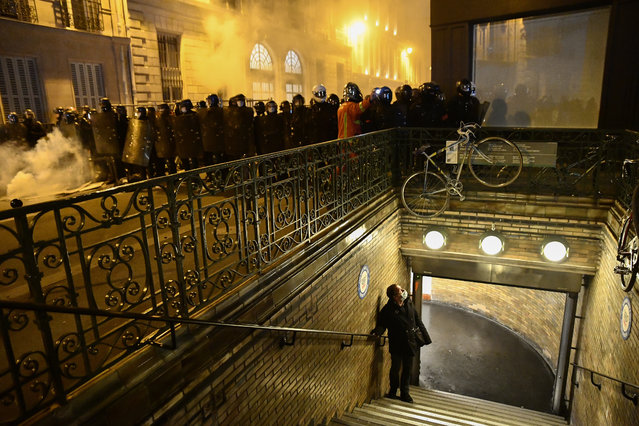 Security forces take measures during protests against the French Government's proposed global security law bill on November 17, 2020 in Paris, France. The protesters include activists, reporters and unions who are concerned that Article 24 of the bill, which prohibits the diffusion of images of police "with intention to harm", threatens the press freedom in France. Several MPs have criticised the bill's implications and President Macron has come under fire from national journalism unions and the UN for the proposals, relating to police accountability and the use of drones for street surveillance. (Photo by Julien Mattia/Anadolu Agency via Getty Images) 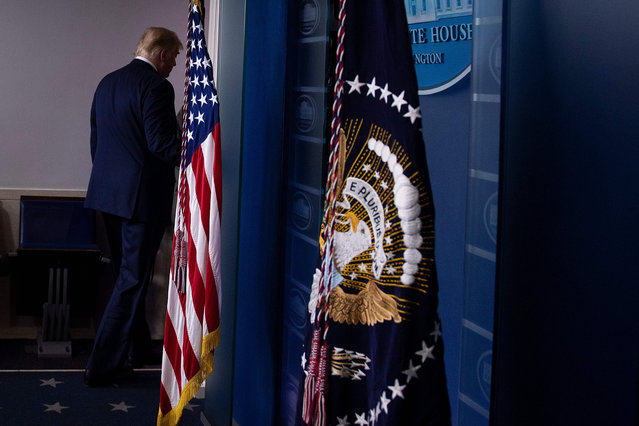 US President Donald Trump leaves after addressing the press from the Brady Briefing Room at the White House in Washington, DC on November 5, 2020. Democrat Joe Biden is leading President Donald Trump in the race for the 270 electoral votes that will put one of them over the top, with the Democrat's campaign asserting they believe he has enough votes to win in key battleground states that remain undecided, like Pennsylvania. (Photo by Brendan Smialowski/AFP Photo) 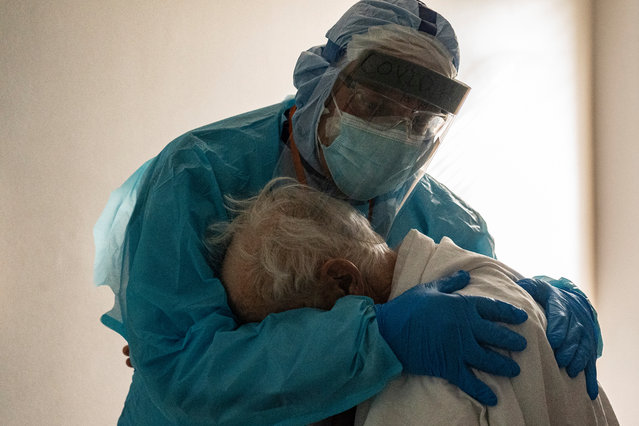 Dr. Joseph Varon hugs and comforts a patient in the COVID-19 intensive care unit (ICU) during Thanksgiving at the United Memorial Medical Center on November 26, 2020 in Houston, Texas. According to reports, Texas has reached over 1,220,000 cases, including over 21,500 deaths. (Photo by Go Nakamura/Getty Images) 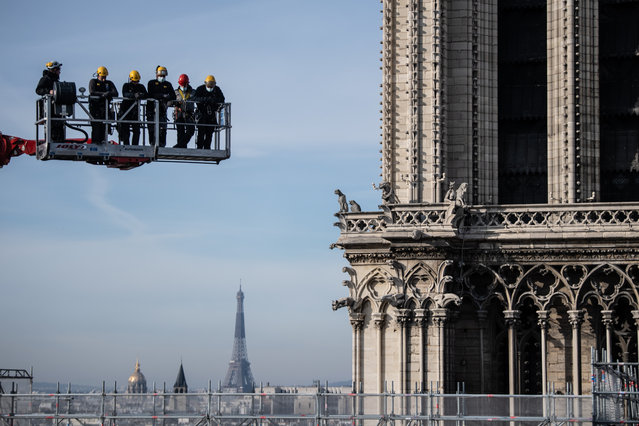 Workers on a crane look at Notre-Dame cathedral site on November 24, 2020 in Paris. The dismantling of the old scaffolding that surrounded the spire of Notre-Dame de Paris before the fire of 15 April 2019 and which hampered the safety of the damaged building, was completed on November 24, 2020. (Photo by Martin Bureau/AFP Photo) 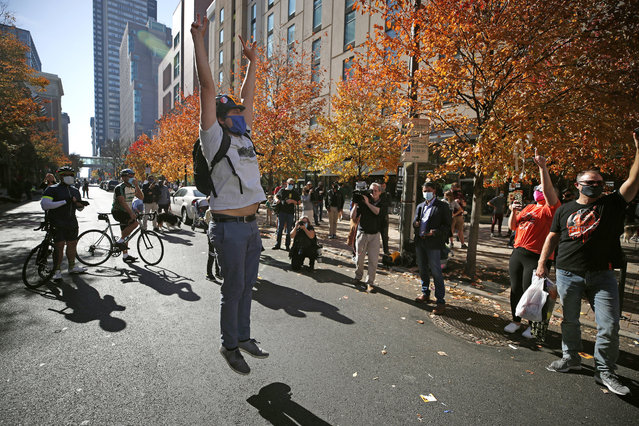 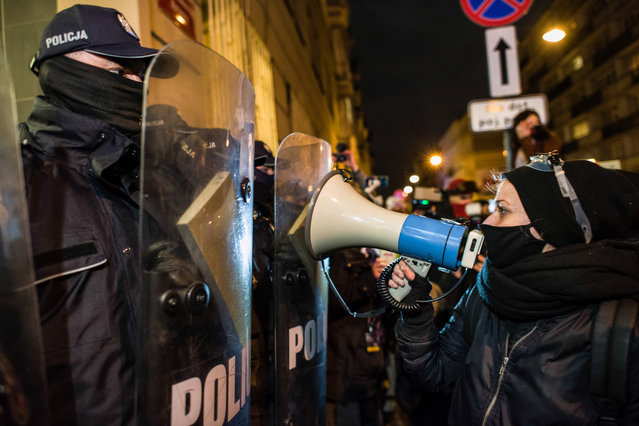 A protesters chants slogans on a megaphone towards the riot police officers during the protest in Warsaw, Poland on November 23, 2020: “Free Abortion and Free Education!”. The Women's Strike rallied again in Warsaw to protest the Constitutional Court's ruling on abortion. The blockade covered, among others MEN (Ministry of National Education). Some of the demonstrators chained themselves to the gate of the ministry. Police officers detained several people, including a journalist who was supposed to violate the inviolability of a policeman during the protest. From the Ministry, the demonstrators moved to the police station to show solidarity with the detained persons. (Photo by Attila Husejnow/SOPA Images/Rex Features/Shutterstock) 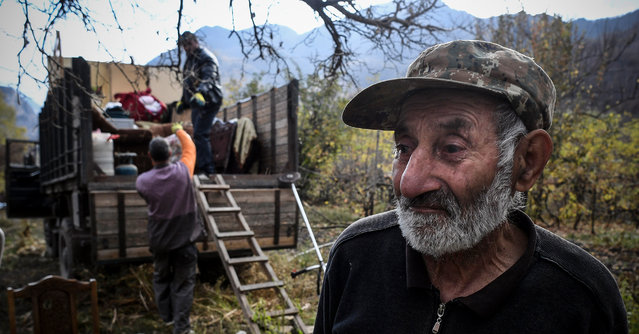 Armenians pack their belongings while leaving their house in the town of Kalbajar on November 12, 2020, during the military conflict between Armenia and Azerbaijan over the breakaway region of Nagorno-Karabakh. Kalbajar is one of the seven districts which will be transferred to Azerbaijan as part of a deal on Nagorno-Karabakh. (Photo by Alexander Nemenov/AFP Photo) 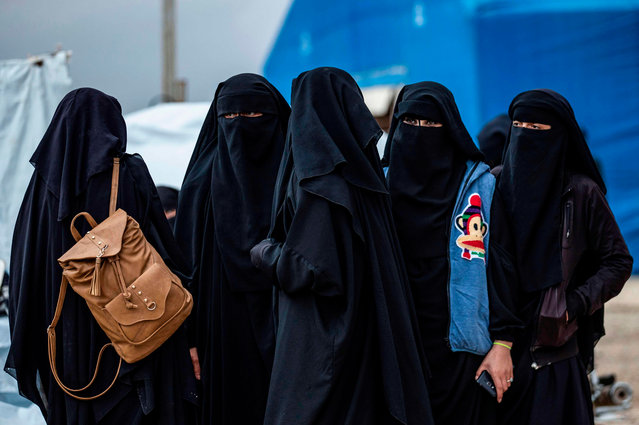 Syrian women get ready to leave the Kurdish-run al-Hol camp holding relatives of alleged Islamic State (IS) group fighters, in the al-Hasakeh governorate in northeastern Syria, on November 16, 2020. A Kurdish official in charge of the region's camps, said 515 people from 120 families were returning to areas in the east of Deir Ezzor province, the first to do so after the Kurdish authorities in northeast Syria vowed to allow thousands of Syrians including the families of IS fighters out of the over-populated camp. (Photo by Delil Souleiman/AFP Photo) 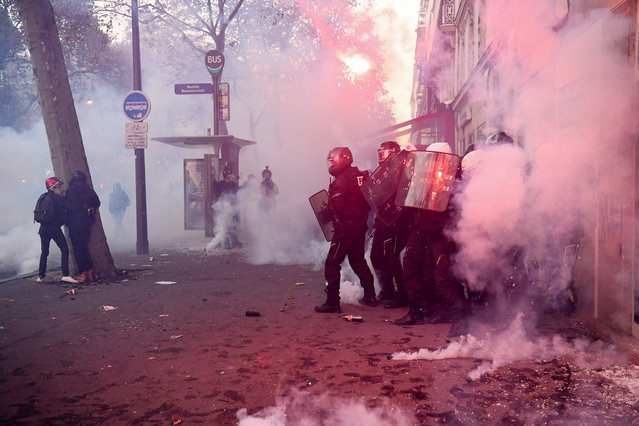 French riot police officers takes cover during a protest against the “global security” draft law, which Article 24 would criminalise the publication of images of on-duty police officers with the intent of harming their “physical or psychological integrity”, in Paris, on November 28, 2020. Dozens of rallies are planned on November 28 against a new French law that would restrict sharing images of police, only days after the country was shaken by footage showing officers beating and racially abusing a black man. (Photo by Alain Jocard/AFP Photo) 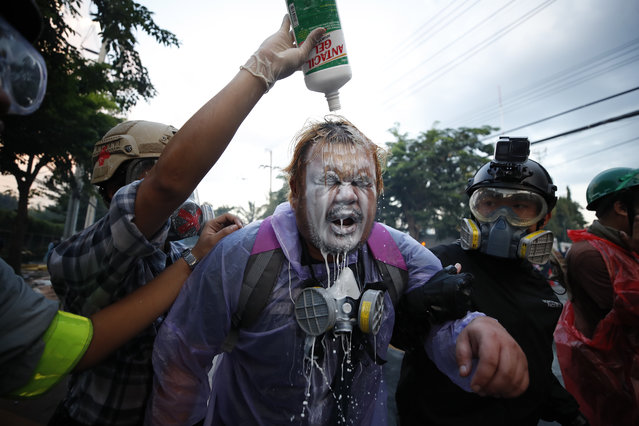 A pro-democracy protester has his face rinsed as police fire tear gas and water cannon during a demonstration against a charter amendment at Parliament in Bangkok, Thailand, 17 November 2020. Thai Members of Parliament are meeting on 17 and 18 November to vote on plans for amending the nation's constitution. The vote comes after week of pro-democracy and monarchical reform protests. (Photo by Diego Azubel/EPA/EFE) 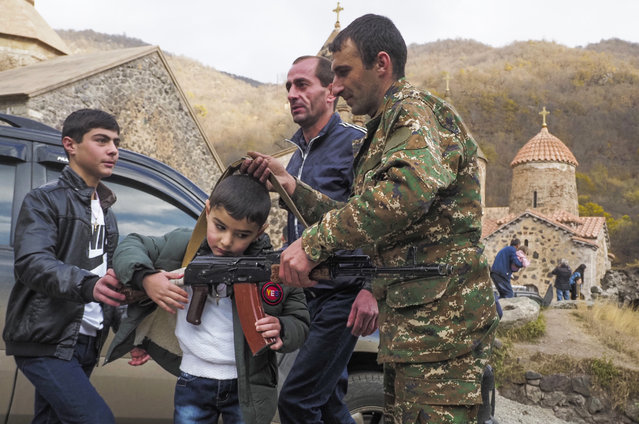 People shows a Kalashnikov gun to a boy at the Dadivank, an Armenian Apostolic Church monastery dating to the 9th century, as ethnic Armenians leave the separatist region of Nagorno-Karabakh to Armenia, Saturday, November 14, 2020. The territory is to be turned over to Azerbaijan on Sunday as part of territorial concessions in an agreement to end six weeks of intense fighting with Armenian forces. Hundreds of thousands of Azeris were displaced by the war that ended in 1994. It is unclear when any civilians might try to settle in Karvachar — which will now be known by its Azeri name Kalbajar — or elsewhere. (Photo by Dmitry Lovetsky/AP Photo) 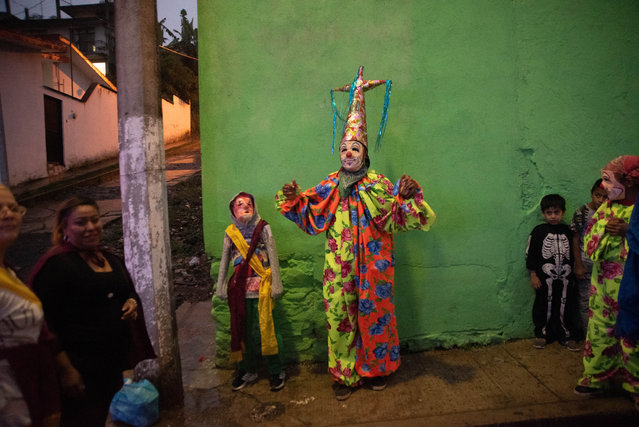 A small group of dancers gathered to offer their honors to San Andres and to ask for protection against the Coronavirus in Mexico City on November 30, 2020. This group of dancers also asked for help from San Andres since the next few days they hope to celebrate the Virgin of Guadalupe, on December 12. (Photo by Hector Adolfo Quintanar Perez/ZUMA Wire/Rex Features/Shutterstock) 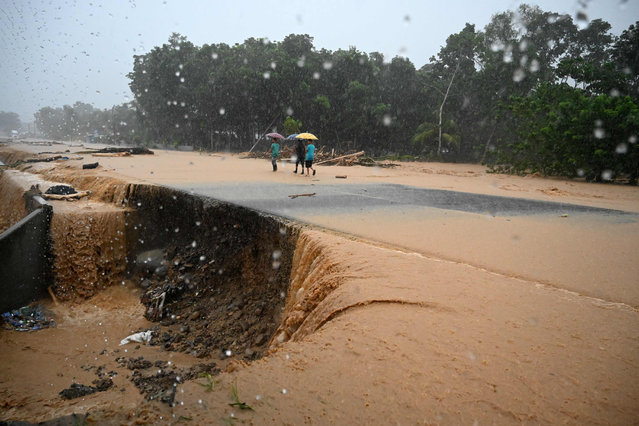