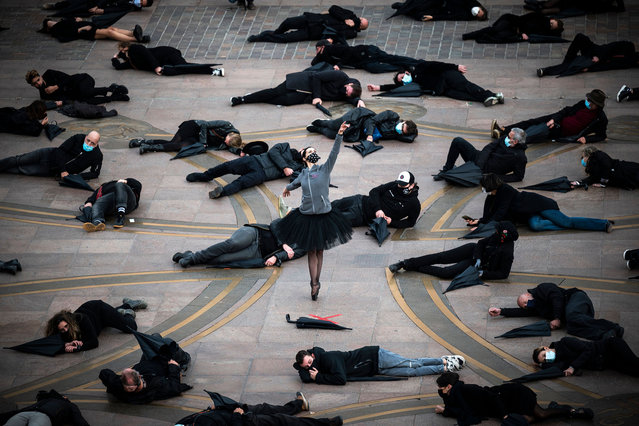 Demonstrators from various economic sectors gather to protest against the closing of “non-essential” business in Toulouse, southern France on November 6, 2020, during the national lockdown aimed at containing the spread of Covid-19, caused by the new coronavirus. (Photo by Lionel Bonaventure/AFP Photo) 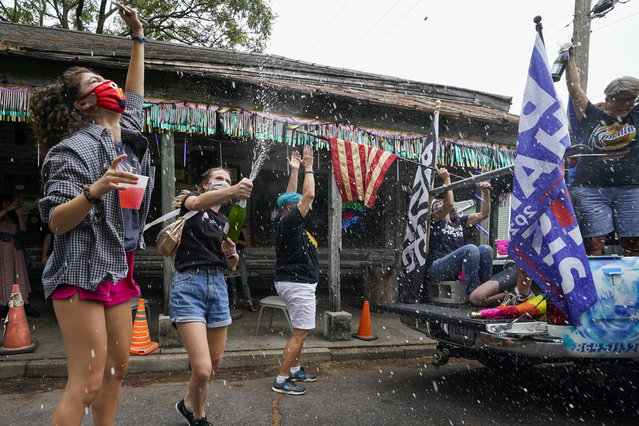 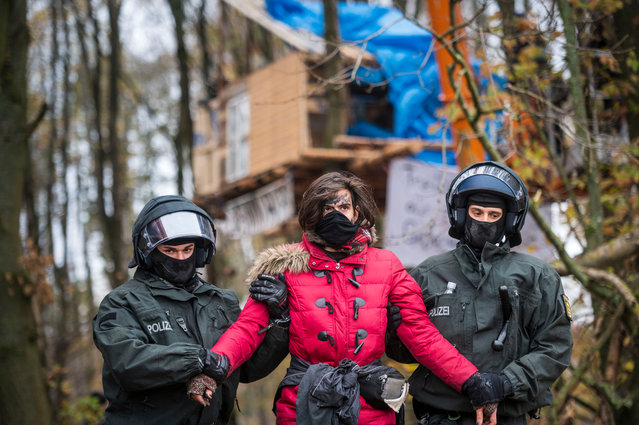 Police officers carry an activist out of the Dannenroeder forest to record their personal details on November 11, 2020 near Stadtallendorf, Germany. In numerous camps and maybe 100-150 tree houses activists are staying in protest against the construction of the A49 and to hinder deforestation. The police now have to clear the tree houses and camps bit by bit. This will take several weeks. (Photo by Thomas Lohnes/Getty Images) 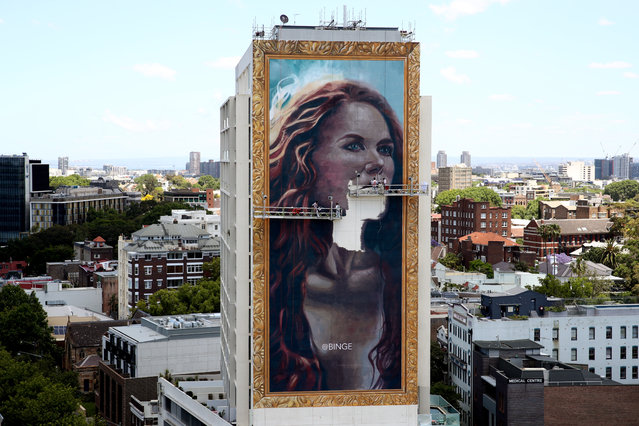 Finishing touches are applied to the portait as seen from the Zenith building on November 14, 2020 in Sydney, Australia. A team of 11 artists have been working over two weeks to hand paint an 18-story portrait of Nicole Kidman on a building overlooking Sydney's Kings Cross. The 18.4 x 36.8-metre painting is the largest of its kind in the Southern Hemisphere. (Photo by Don Arnold/WireImage) 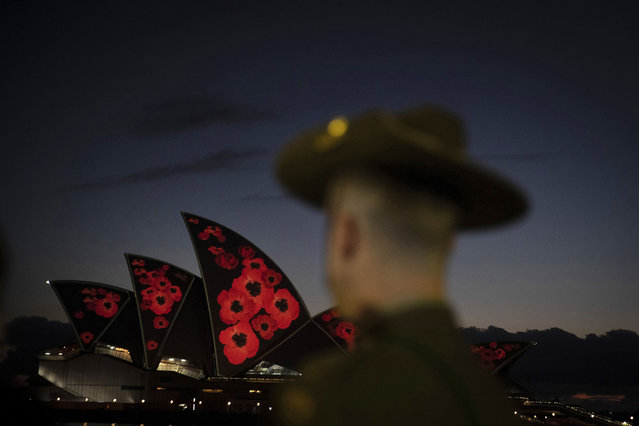 A bugler looks on as a general view is seen of poppies projected onto the sails of the Opera House on November 11, 2020 in Sydney, Australia. Remembrance Day 2020 marks 102 years since the Armistice that ended the First World War on 11 November 1918. Almost 62,000 Australians died fighting in four years of global conflict. On this day Australians observe one minute's silence at 11 am to honour those who have served and those who have died in war and on peacekeeping and humanitarian operations. (Photo by Jenny Evans/Getty Images) 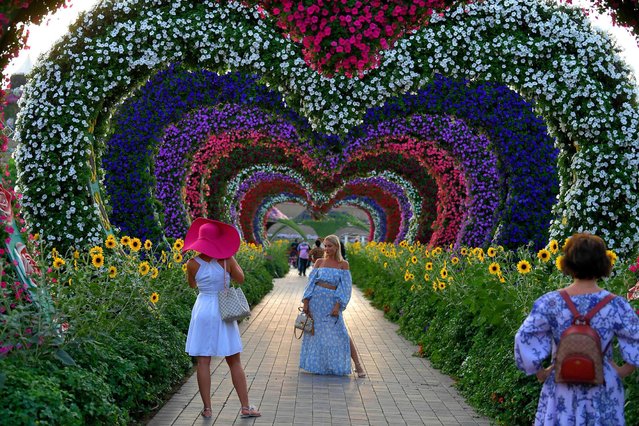 A woman poses for a picture in a flower tunnel at the Dubai Miracle Garden, the world's largest flower garden, in the United Arab Emirates, on November 11, 2020. The Miracle Garden, home to giant floral structures and millions of flower and plant varieties, is open for visitors from November 1. (Photo by Karim Sahib/AFP Photo) 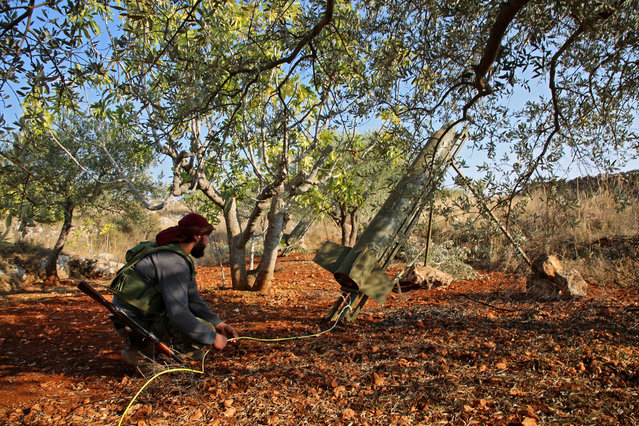 A Syrian rebel fighter prepares to fire a rocket toward a position held by regime forces, in the southern countryside of the rebel-held Idlib province, on November 13, 2020. (Photo by Mohammed Al-Rifai/AFP Photo) 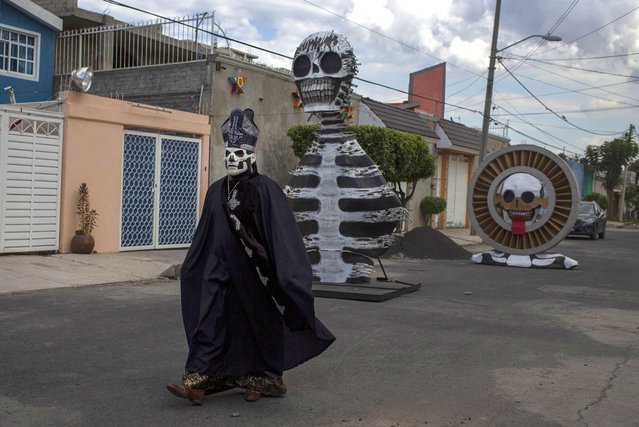 A disguised person walks among the monumental skulls installed as part of the “Day of the Dead” celebration at Santa Cecilia, Tlahuac on November 1, 2020 in Mexico City, Mexico. Known as one of the most representative traditions in Mexico, the day of the dead takes place during November 1 and 2 when peole remember those who have died with offerings, family gatherings and vistis to cemeteries. Due to the Covid-19 pandemic, massive celebrations are not allowed and graveyards will remain closed this year. (Photo by Cristopher Rogel Blanquet/Getty Images) 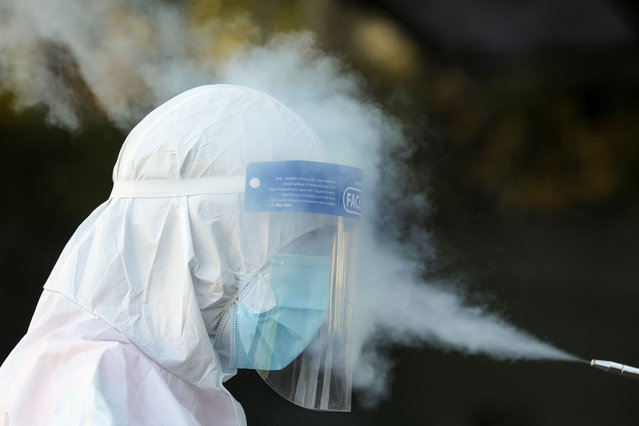 An ambulance worker wearing safety equipment and mask against the coronavirus disease (COVID-19) goes through a disinfection routine after arriving at the headquarters of the Bucharest Ilfov Ambulance Service, in Bucharest, Romania, November 1 2020. (Photo by Octav Ganea/Inquam Photos via Reuters) 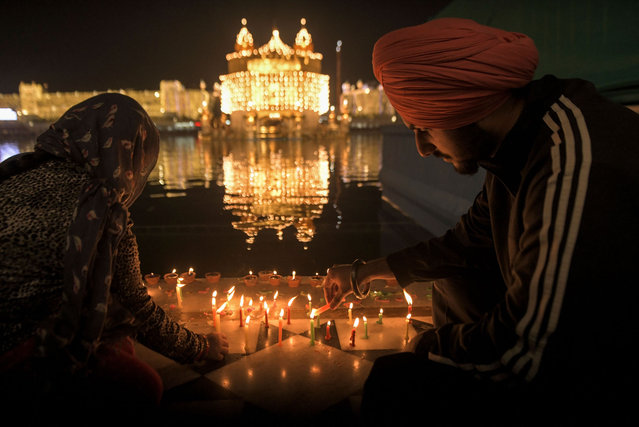 Sikh devotees light candles on the eve of the birth anniversary of the fourth Sikh Guru Ramdas, at the illuminated Golden Temple in Amritsar on November 1, 2020. (Photo by Narinder Nanu/AFP Photo) 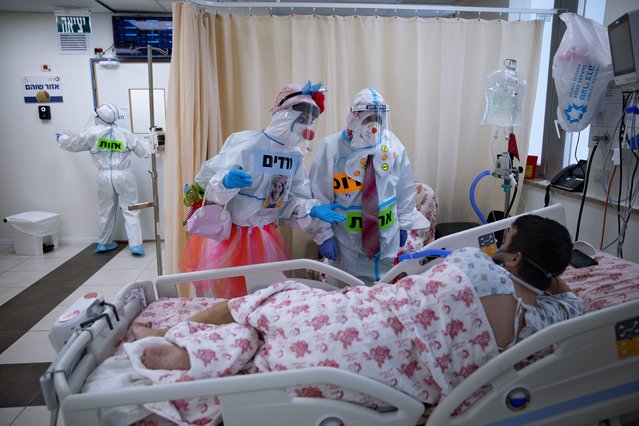 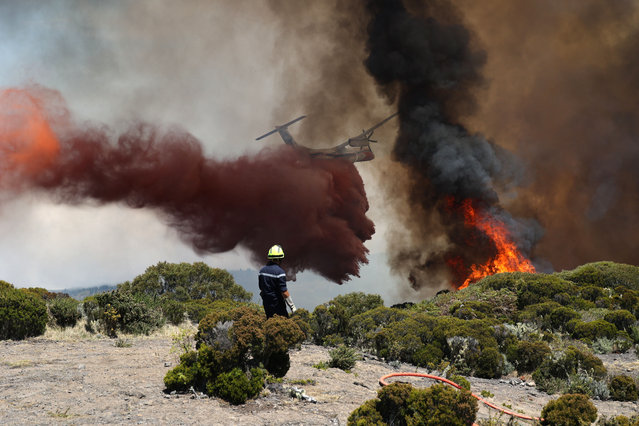 Firefighters work to extinguish a fire as a water bomber aircraft flies near Saint-Paul, on the French Indian Ocean island of La Reunion, on November 8, 2020. A fire, going on for three days in Reunion Island, has so far ravaged more than 200 hectares of vegetation in the Maido massif, a reservoir of biodiversity in the west of the island. (Photo by Richard Bouhet/AFP Photo) 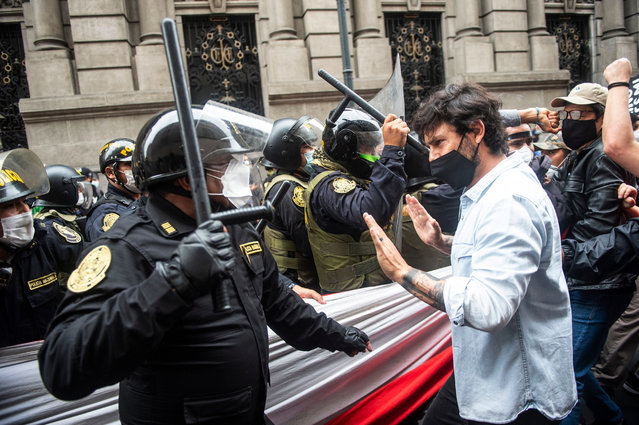 A supporter of ousted Peruvian President Martin Vizcarra, who was removed in an impeachment vote late Monday, gestures at a riot police officer during a demonstration against the new government in Lima on November 10, 2020. Speaker of Congress Manuel Merino assumed office Tuesday as Peru's third president in four years, amid street protests and market jitters after the impeachment of Martin Vizcarra over corruption allegations. (Photo by Ernesto Benavides/AFP Photo) 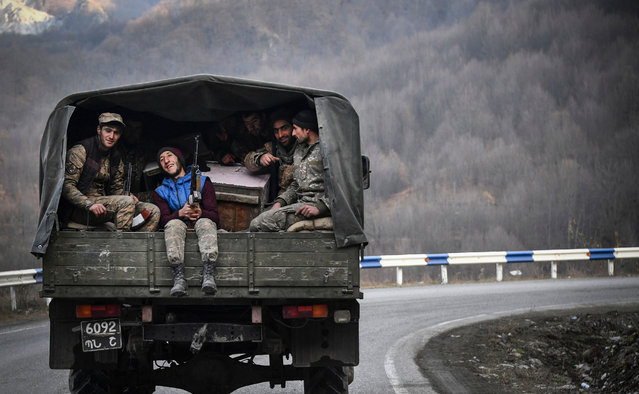 Armenian soldiers sit in the back of a truck as they drive along a road outside Kalbadjar on November 15, 2020. Azerbaijan said on November 15, 2020, it had agreed to extend a deadline for Armenia to withdraw from a disputed district as part of a peace accord that ended six weeks of fierce fighting over the Nagorno-Karabakh region. Armenia lost around 2300 dead during the military conflict over this breakaway region. (Photo by Alexander Nemenov/AFP Photo) 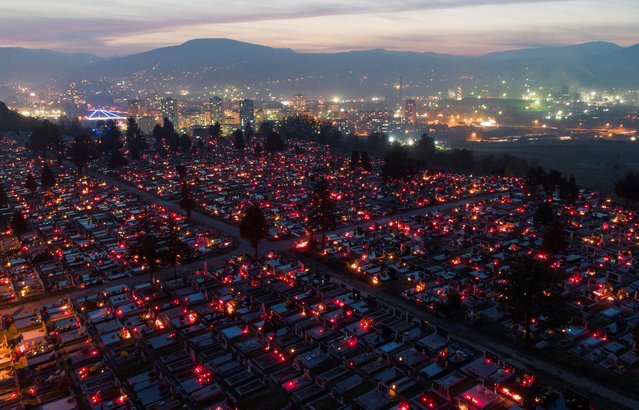 Aerial view of cemetery on Crkvicko hill during All Saints' Day in Zenica, Bosnia and Herzegovina on November 1, 2020. (Photo by Dado Ruvic/Reuters) A woman looks on as she takes part in a protest on the Day of the Dead against gender violence and femicide, in Mexico City, Mexico, November 2, 2020. (Photo by Raquel Cunha/Reuters) 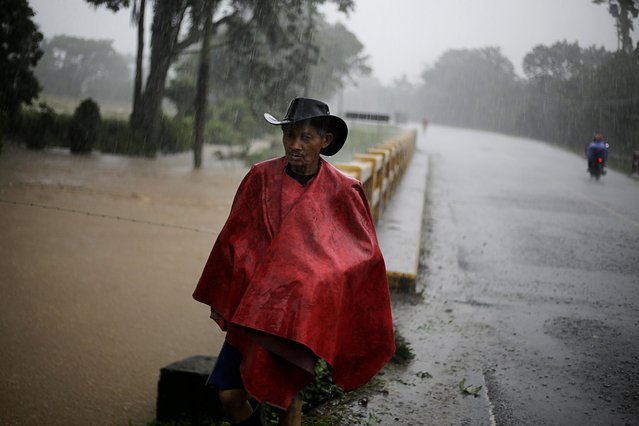 A man walks under the rain as Storm Eta passes through Tela, Honduras on November 4, 2020. (Photo by Jorge Cabrera/Reuters) 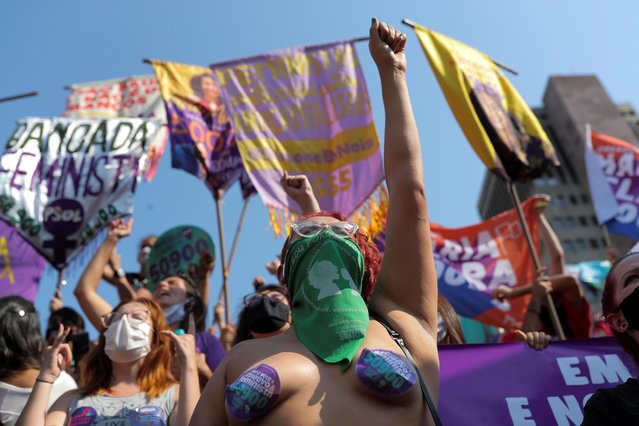 People take part in a protest for justice for rape victims and justice for Mariana Ferrer, who was verbally attacked by a defendant's attorney during a rape trial in which the defendant was later acquitted, in Sao Paulo, Brazil on November 8, 2020. (Photo by Amanda Perobelli/Reuters) 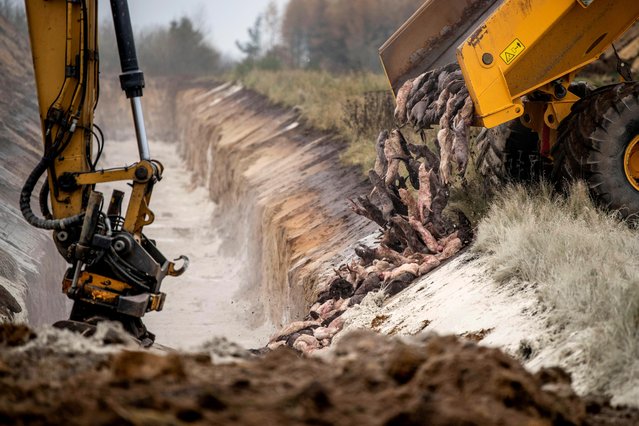 A truck unloads dead mink into a ditch as members of Danish health authorities assisted by members of the Danish Armed Forces bury the animals in a military area near Holstebro, Denmark on November 9, 2020. Danish mink will be buried in mass graves on military land as the country's incinerators and rendering plants struggle to keep up, the Danish environmental and health authorities announced. Denmark will cull about 17 million mink after a mutated form of coronavirus that can spread to humans was found on mink farms. (Photo by Morten Stricker/Ritzau Scanpix/AFP Photo) 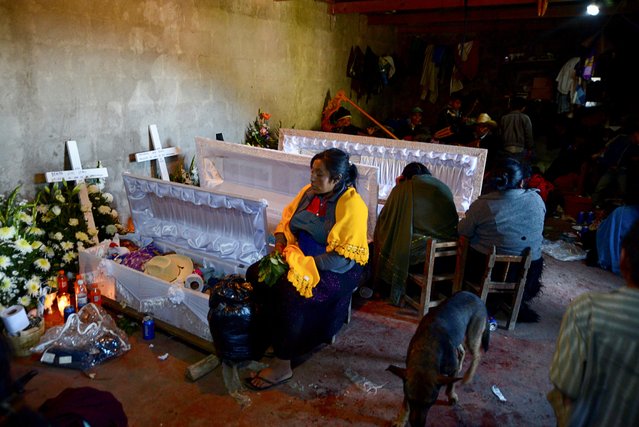 Women take part in a wake for their loved ones, who died during a landslide caused by rains brought by Tropical Storm Eta, in the village of Mukem, Chiapas state, Mexico on November 9, 2020. (Photo by Jacob Garcia/Reuters)
Edit Del
18 Feb 2021 09:22:00, post received 0 comments
Publication archive:
←   →
Popular tags:
All tags
Last searches: