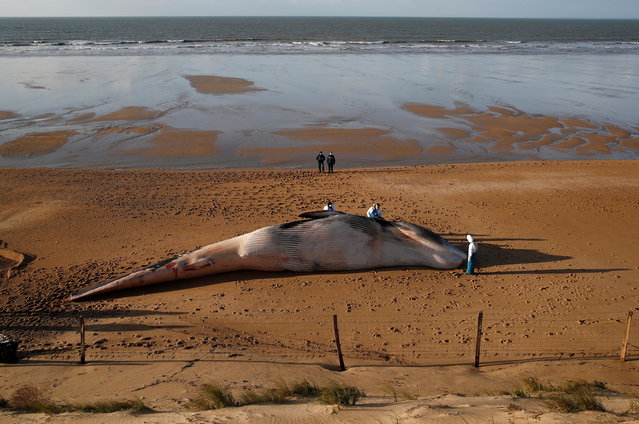 Experts at the Observatoire Pelagis examine the dead body of a fin whale which was found stranded on a beach in Saint-Hilaire-de-Riez, France, November 16, 2020. (Photo by Stephane Mahe/Reuters) 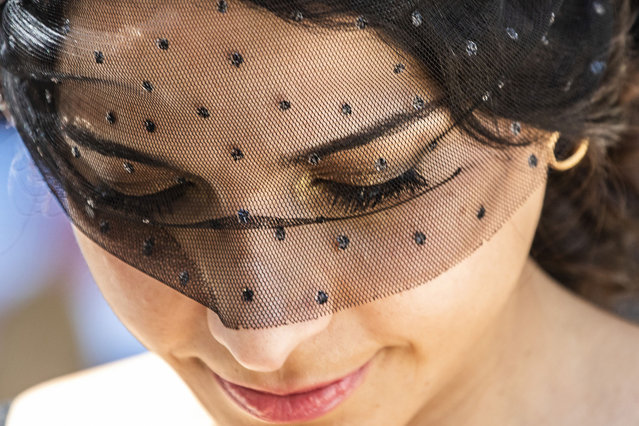 A woman wearing beaded netting is seen during Golden Eagle Day at Rosehill Gardens on October 31, 2020 in Sydney, Australia. The Golden Eagle is the third richest race in Australia and is run on the final day of the Australian Turf Club Everest Carnival. (Photo by Jenny Evans/Getty Images) 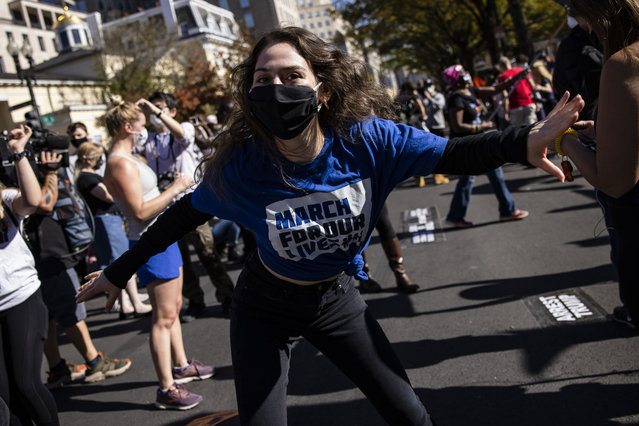 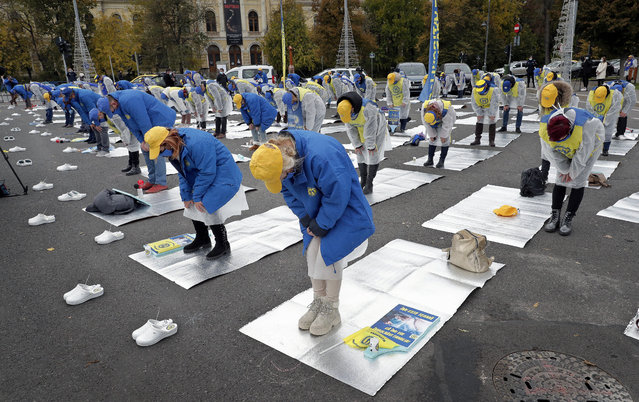 Romanian health care workers protest on thermal blankets against the working conditions under COVID-19, at Victoriei Plaza, in Bucharest, Romania, 12 November 2020. Dozen of representatives of the Sanitary Solidarity Trade Union Federation protested in front of the Government headquarters, demanding decent working conditions for the employees in the health system, better COVID-19 protection equipment and counter-measures, as well as better payment for the COVID front-line employees and clearer laws for the heritage pensions for the relatives of those who died infected with SARS-CoV-2 disease at job. (Photo by Robert Ghement/EPA/EFE) 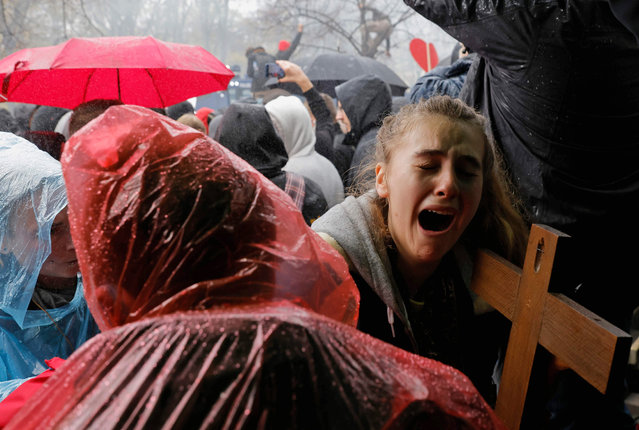 A young woman with a crucifix cries as police use a water cannon to disperse protesters demonstrating against measures imposed by the German government to limit the spread of the novel coronavirus, on November 18, 2020 close to the Reichstag building housing the Bundestag (lower house of parliament) in Berlin. - After repeated warnings for the crowd to put on face coverings went unheeded, police said they would take action to clear the protest and “detain violators”. Around 5,000 activists massed at the Brandenburg Gate, after the German government banned rallies outside parliament because of fears of violence. The demonstration mirrored similar protests seen across Europe against restrictions opponents see as a violation of their civil rights despite government warnings about the need to stop the spread of infections. (Photo by Odd Andersen/AFP Photo) 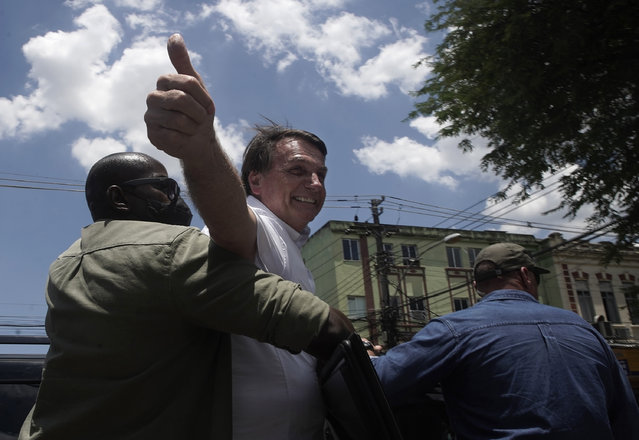 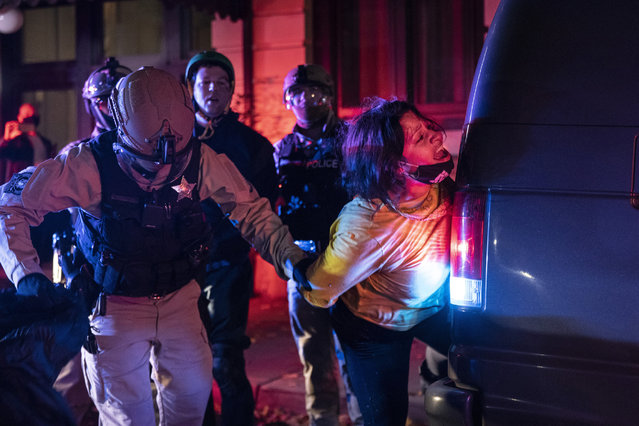 Police arrest a protester as clashes during a march following the presidential election Wednesday, November 4, 2020, in Portland, Ore. (Photo by Paula Bronstein/AP Photo) 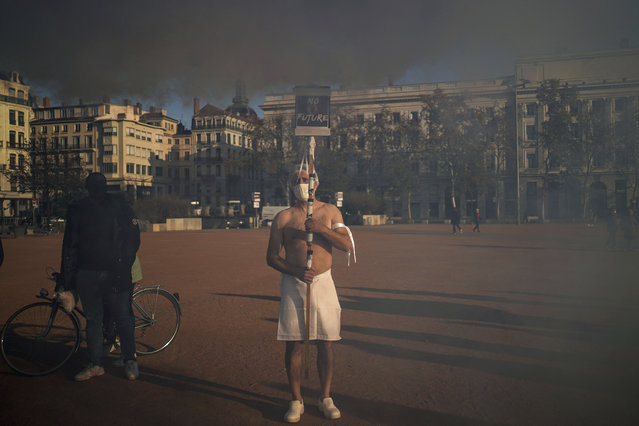 A man holds a banner reading “No future” during a demonstration against the closure of shops, bars en restaurants, in Lyon, central France, Monday, November 23, 2020. France has surpassed 2 million confirmed cases of coronavirus, the fourth-highest total in the world. (Photo by Laurent Cipriani/AP Photo) 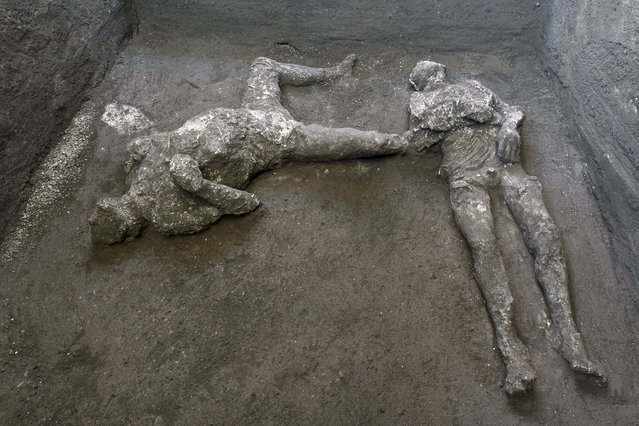 The casts of what are believed to have been a rich man and his male slave fleeing the volcanic eruption of Vesuvius nearly 2,000 years ago, are seen in what was an elegant villa on the outskirts of the ancient Roman city of Pompeii destroyed by the eruption in 79 A.D., where they were discovered during recents excavations, Pompeii archaeological park officials said Saturday, November 21, 2020. (Photo by Parco Archeologico di Pompei via AP Photo) 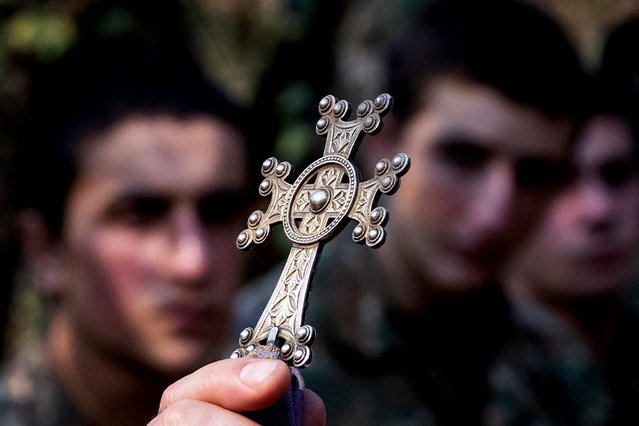 Servicemen take part in a christening service performed near the front line in Nagorno-Karabakh on November 2, 2020. The fighting between Armenia and Azerbaijan over Nagorno-Karabakh resumed in late September, with both countries blaming each other for provocation, declaring martial law, and mobilising their armed forces. (Photo by Stanislav Krasilnikov/TASS) 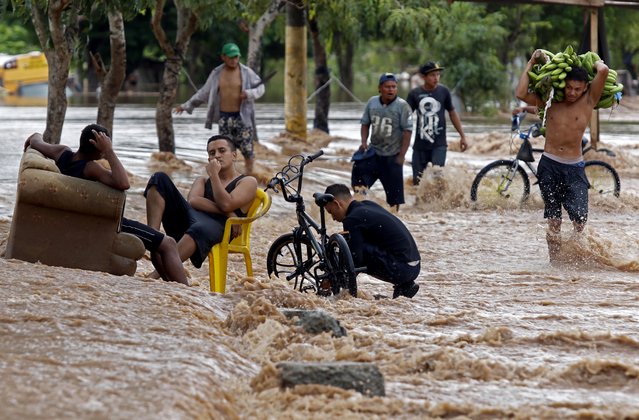 A yougster carries bananas as he wades near men sitting at a flooded street in El Progreso, department of Yoro, Honduras on November 18, 2020, after the passage of Hurricane Iota, now downgraded to Tropical Storm. Storm Iota, which made landfall in Nicaragua as a “catastrophic” Category 5 hurricane Monday, killed at least ten people as it smashed homes, uprooted trees and swamped roads during its destructive advance across Central America. (Photo AFP Photo/Stringer) 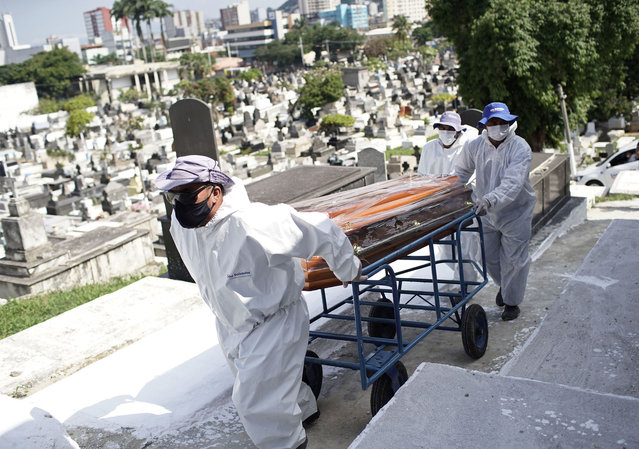 Cemetery workers carry the coffin of Genivaldo Santos, who died from Covid-19, who died from the new coronavirus, as relatives cry during his burial at the municipal cemetery in Nova Iguacu, Brazil, Wednesday, November 25, 2020. Rio has seen a surge of hospitalizations due to COVID-19 infections. There has been speculation the nation could be on track to follow the path of U.S. and Europe, where new cases are spiraling. (Photo by Silvia Izquierdo/AP Photo) 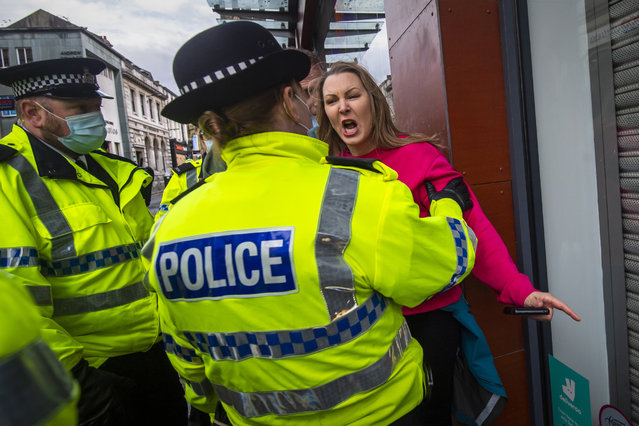 A woman without a face mask shouts and gestures towards police officers during an anti lockdown protest on November 14, 2020 in Liverpool, England. Throughout the Covid-19 pandemic, there have been recurring protests across England against lockdown restrictions and other rules meant to curb the spread of the virus. Police in Liverpool have warned protesters that they will take action against protesters, who could face possible fines. (Photo by Anthony Devlin/Getty Images) 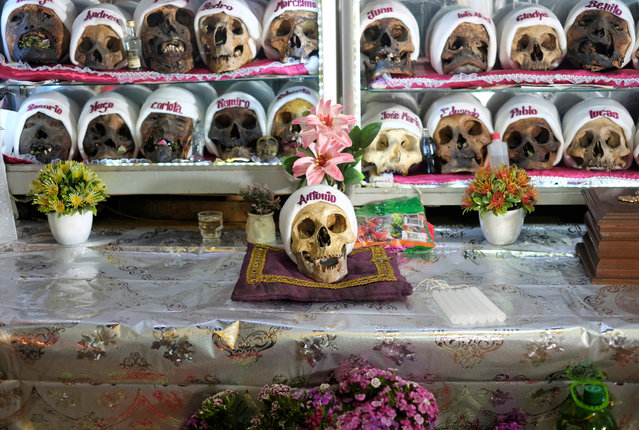 Natitas, skulls of the dead, who people asking for blessings, health and protection are seen before the Dia de las Natitas (Day of the Skulls) celebrations, in La Paz, Bolivia on November 7, 2020. (Photo by David Mercado/Reuters) 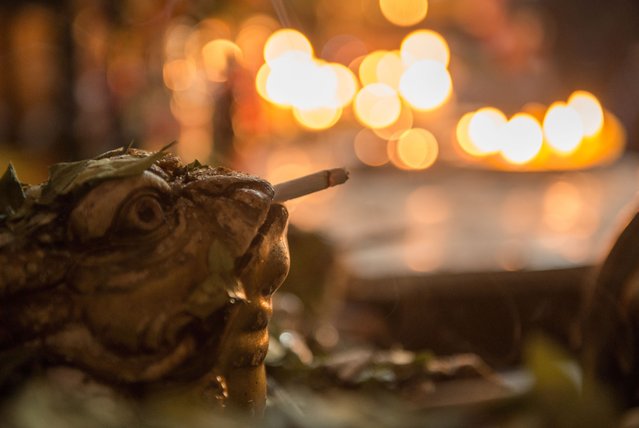 Ceremonial skulls La Paz, Bolivia on November 6, 2020. Toads are in Bolivia symbols of the soil and of luck. They complement the Ñatitas, skulls of deceased people that are believed to have special powers. People ask them for different favours. The tradition is related to All Saints´ Day. (Photo by Radoslaw Czajkowski/Rex Features/Shutterstock) 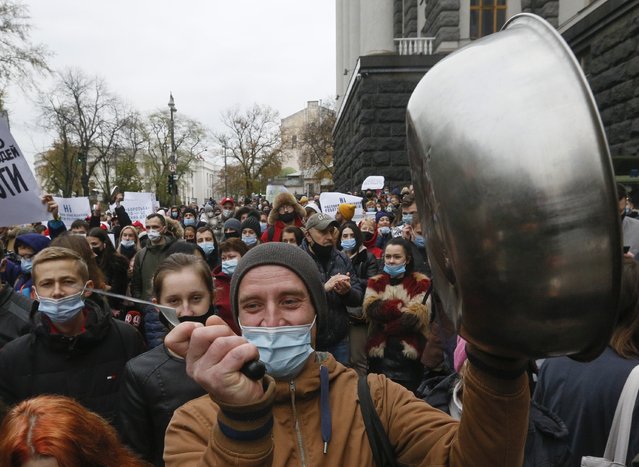 Workers of restaurant businesses bang on pans in a sign of protest against the newly introduced coronavirus weekend quarantine in front of the Cabinet in Kyiv, Ukraine, Wednesday, November 11, 2020. Ukraine's Cabinet has ruled to introduce a weekend quarantine, allowing to work only food stores, pharmacies, public transport and gas stations in an attempt to fight against raising COVID-19 cases in Ukraine. (Photo by Efrem Lukatsky/AP Photo) 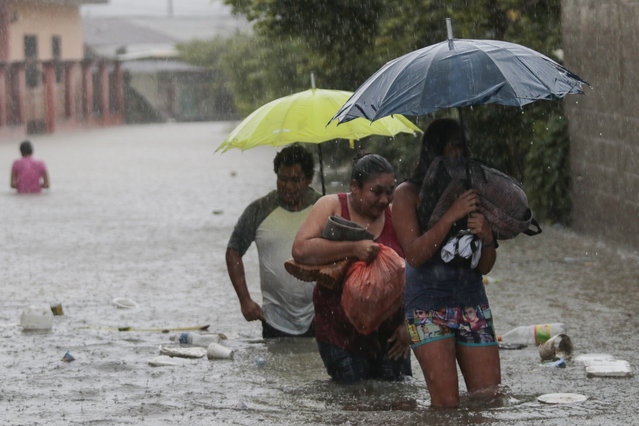 Residents wade through a flooded road carrying some belongings, in Progreso Yoro, Honduras, Wednesday, November 4, 2020. Eta weakened from the Category 4 hurricane to a tropical storm after lashing the Caribbean coast for much of Tuesday, its floodwaters isolating already remote communities and setting off deadly landslides. (Photo by Delmer Martinez/AP Photo) 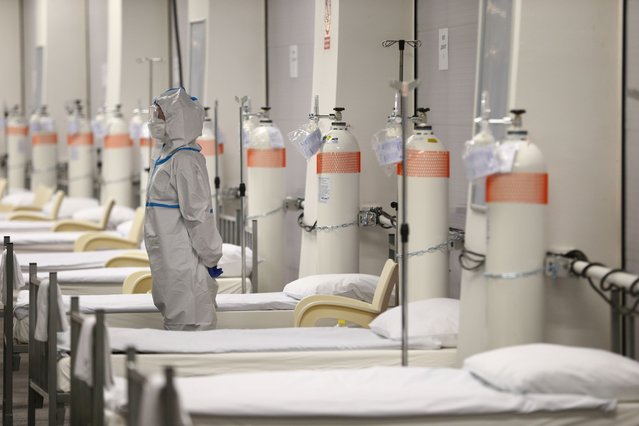 Medical staff is seen in Arena Zagreb, as the sports arena is converted to a field hospital for people infected with the coronavirus disease (COVID-19) in Zagreb, Croatia, November 3, 2020. (Photo by Antonio Bronic/Reuters) 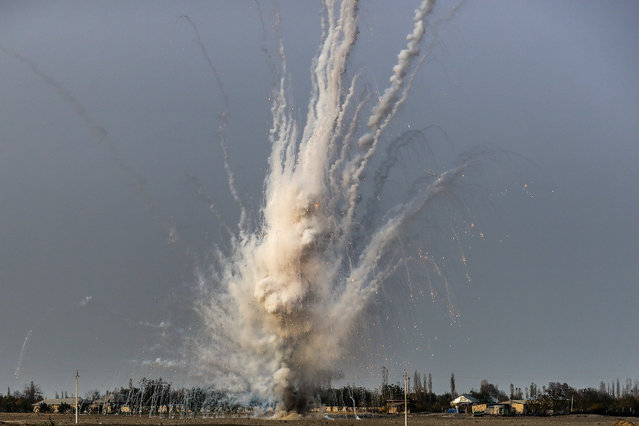 The National Agency for Mine Action (ANAMA) neutralizes an unexploded ordnance, as it was impossible to be transported, after Armenians fired phosphorus shells at Sahlabad village on November 4, 2020 in Tartar, Azerbaijan. The fighting between Armenia and Azerbaijan over Nagorno-Karabakh resumed in late September, with both countries blaming each other for provocation, declaring martial law, and mobilising their armed forces. (Photo by Aziz Karimov/Getty Images) 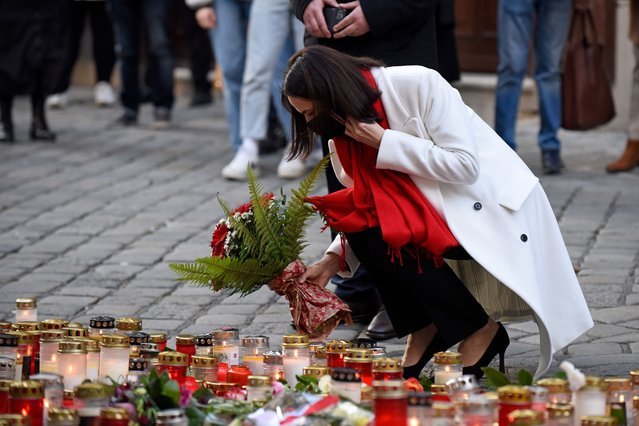 Belarusian opposition leader Svetlana Tikhanovskaya lays flowers at a makeshift memorial of candles and flowers at the scene of a terror attack where last Monday night a gunman rampaged on November 05, 2020 in Vienna, Austria. Kujtim Fejzulai, a 20-year-old with Austrian and North Macedonian citizenship who had been radicalized by Islamic extremism, killed four people and injured 23 others before being shot dead by police. (Photo by Thomas Kronsteiner/Getty Images)
Edit Del
21 Feb 2021 08:30:00, post received 0 comments
Publication archive:
←   →
Popular tags:
All tags
Last searches: