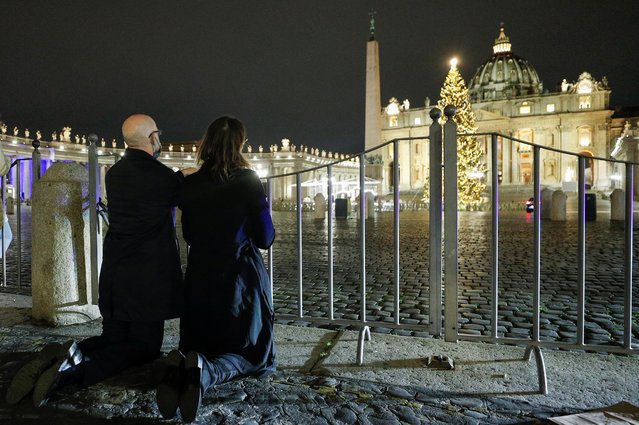 People pray outside St. Peter's square during the Christmas Eve mass celebrated by Pope Francis, where only few faithful were able to participate due to the coronavirus disease (COVID-19) regulations applied in order to stop a rise in infections, in Rome, Italy on December 24, 2020. (Photo by Guglielmo Mangiapane/Reuters) 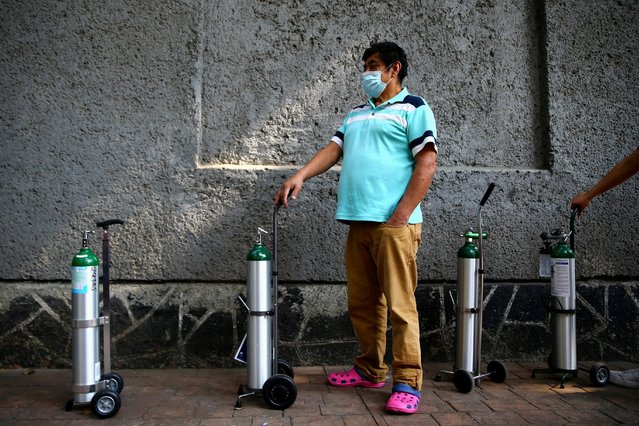 A man queue to fill oxygen in a tank for a relative due to an increase in coronavirus disease (COVID-19) infection rates in Mexico, outside a medical supply store in Mexico City, December 21, 2020. (Photo by Edgard Garrido/Reuters) 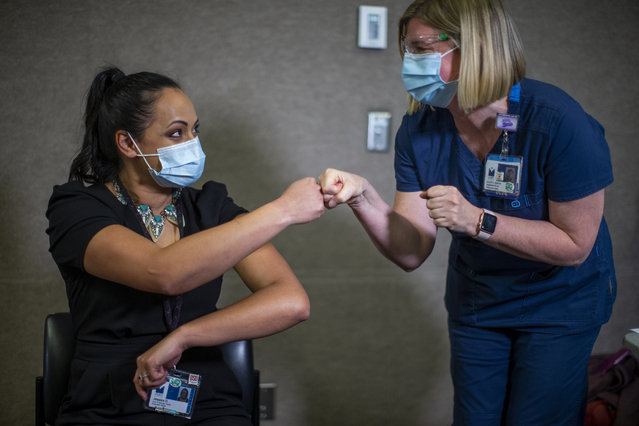 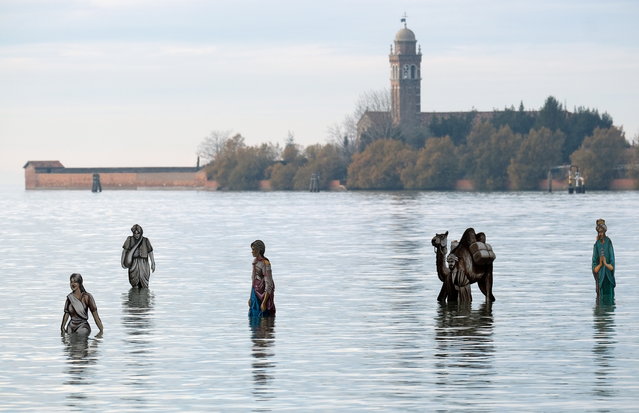 A nativity scene display designed by local greengrocer Francesco Orazio is seen over the water surface of Venice's lagoon by Burano island, ahead of Christmas, in Venice, Italy, December 15, 2020. (Photo by Manuel Silvestri/Reuters) 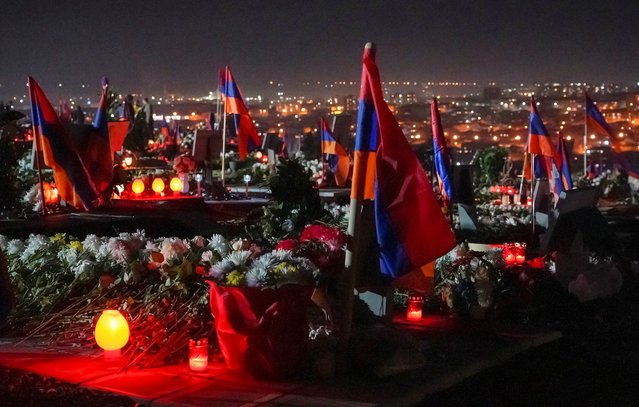 A view shows Yerablur Military Pantheon cemetery on the eve of the Armenian nationwide mourning to commemorate those killed in a conflict over the region of Nagorno-Karabakh in Yerevan, Armenia on December 18, 2020. (Photo by Artem Mikryukov/Reuters) 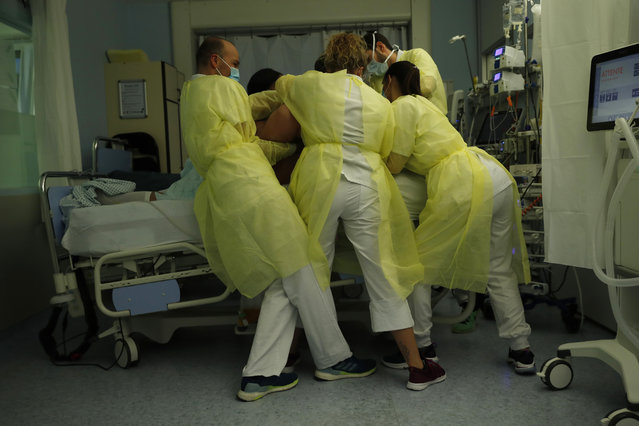 Nurse Anne-Catherine Charlier, right, and co-workers, wearing personal protection equipment, work in the intensive care ward for COVID-19 patients at the CHR Citadelle hospital in Liege, Belgium, Wednesday, December 16, 2020. Belgium has been hit hard by the pandemic with more than 18,000 confirmed deaths. The patient was not confirmed but suspected to have coronavirus. (Photo by Francisco Seco/AP Photo) 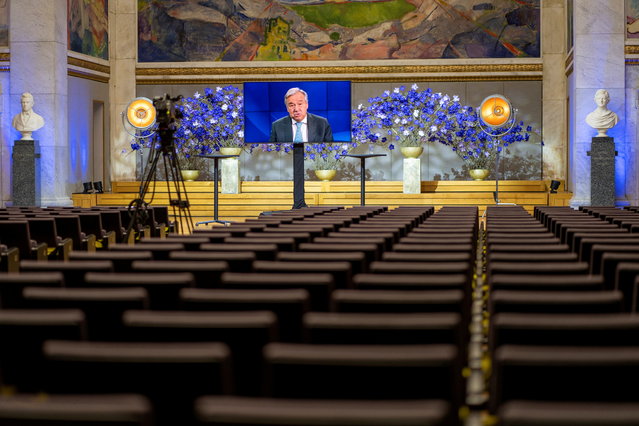 U.N. Secretary General Antonio Guterres speaks in the University Hall during the digital broadcast of the Nobel Peace Prize Forum, in Oslo, Norway on December 11, 2020. This year's theme is “Multilateralism and global governance in the wake of the corona pandemic”. (Photo by Heiko Jungevia/NTB Scanpix via Reuters) 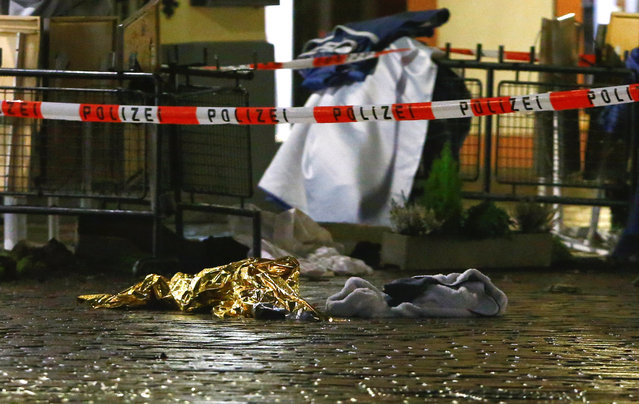 Evidence lies at the scene of an incident in Trier, Germany, Tuesday, December 1, 2020. German police say people have been killed and several others injured in the southwestern German city of Trier when a car drove into a pedestrian zone. Trier police tweeted that the driver had been arrested and the vehicle impounded. (Photo by Michael Probst/AP Photo) 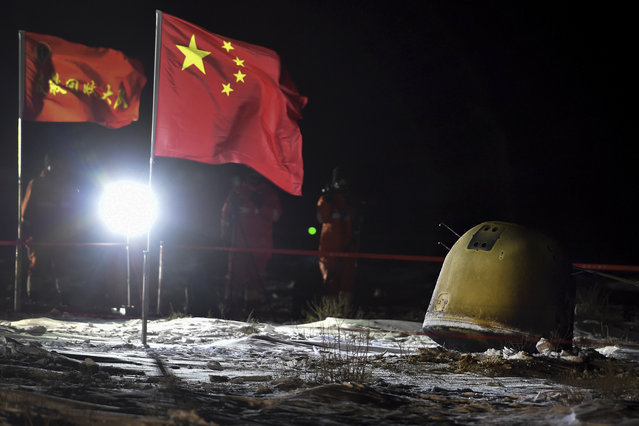 In this photo released by Xinhua News Agency, recovery crew members film the capsule of the Chang'e 5 probe after its successful landed in Siziwang district, north China's Inner Mongolia Autonomous Region on Thursday, December 17, 2020. A Chinese lunar capsule returned to Earth on Thursday with the first fresh samples of rock and debris from the moon in more than 40 years. (Photo by Ren Junchuan/Xinhua via AP Photo) 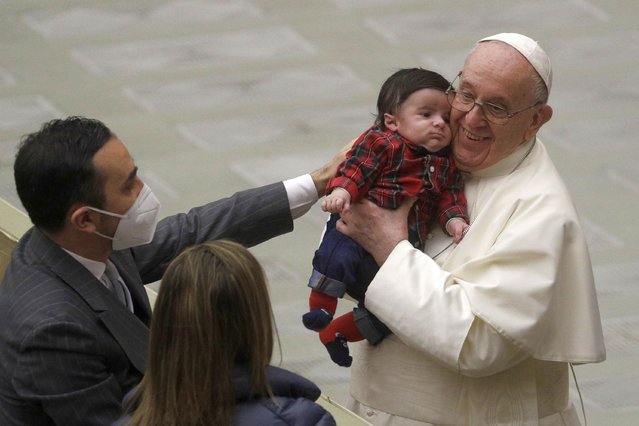 Pope Francis exchanges holidays greeting with Vatican employees in the Paul VI hall , Monday, December 21, 2020. The Pontiff urged Vatican bureaucrats to stop their gossipy, self-absorbed conflicts, issuing another tough-love Christmas message to his closest collaborators at the end of a year marked by the coronavirus pandemic and a financial scandal at the Holy See. (Photo by Gregorio Borgia/AP Photo) 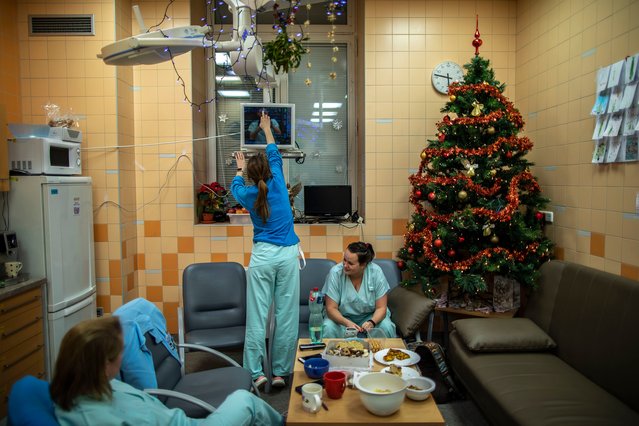 Medical workers wearing protective gear rest at the intensive care unit of the General University Hospital on the Cristmas Eve on December 24, 2020 in Prague, Czech Republic. The Czech Republic has over 10,000 COVID-19 deaths and has reported over 14, 000 new cases for yesterday. (Photo by Gabriel Kuchta/Getty Images) 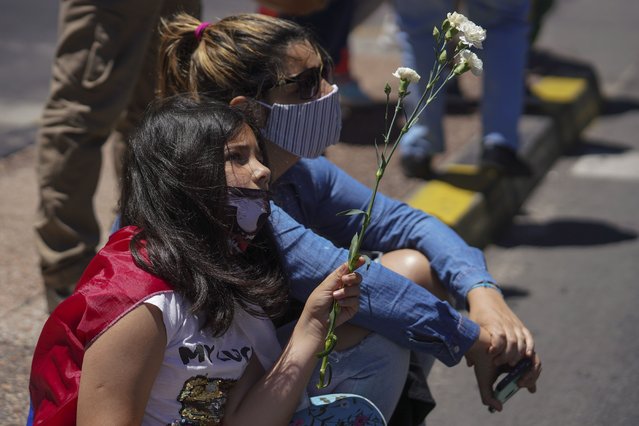 Mourners wait for the hearse carrying the casket of former Uruguayan President Tabare Vazquez on its way to the cemetery in Montevideo, Uruguay,Sunday, December 6, 2020. The former president died at his home in Montevideo early Sunday. (Photo by Matilde Campodonico/AP Photo) 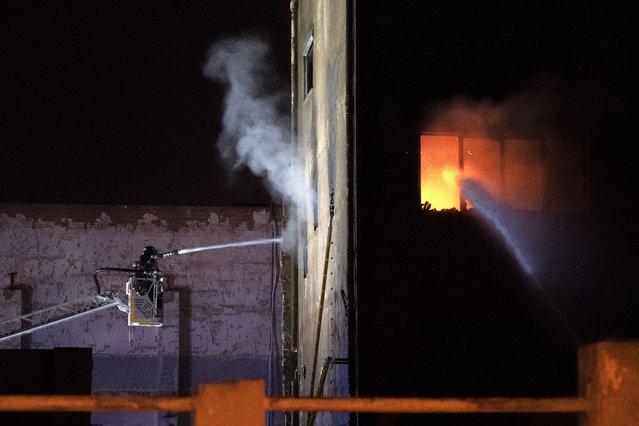 Firefighters work to extinguish a fire at a building in Badalona, Barcelona, Spain, Thursday, December 10, 2020. Authorities in northeastern Spain say a fire has raged through an abandoned building occupied by squatters in the city of Badalona, injuring at least 17 people, including two in critical condition. Firefighters say they rescued around 30 people from windows as the building burned late Wednesday. (Photo by Joan Mateu/AP Photo) 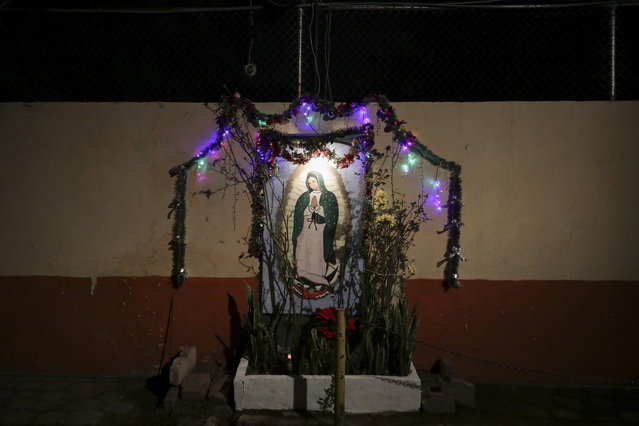 A neighborhood shrine to the Virgin of Guadalupe built in a wall is seen in Mexico City, Friday December 11, 2020. Nationwide, devotees of the Virgin make a pilgrimage to the Basilica in honor of her December 12 feast day, but the Catholic Church announced the closure of the Basilica for this year's pilgrimage due to the coronavirus pandemic. (Photo by Eduardo Verdugo/AP Photo) 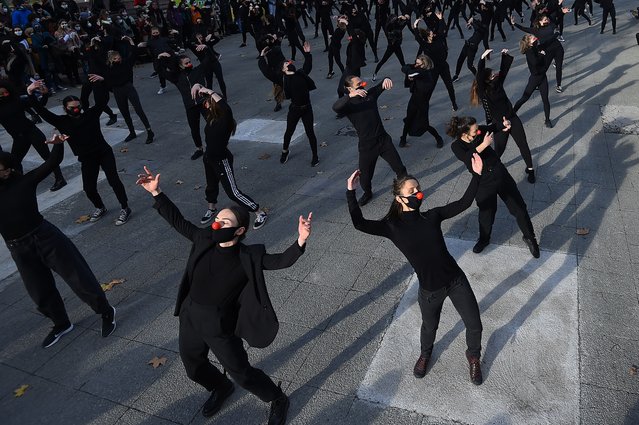 A group of 180 dancers from the group “Les essentiels” dance during a performance on December 12, 2020 in Montpellier to protest against the government's health policy and against the decisions taken with regard to the cultural world in France (Photo by Sylvain Thomas/AFP Photo) 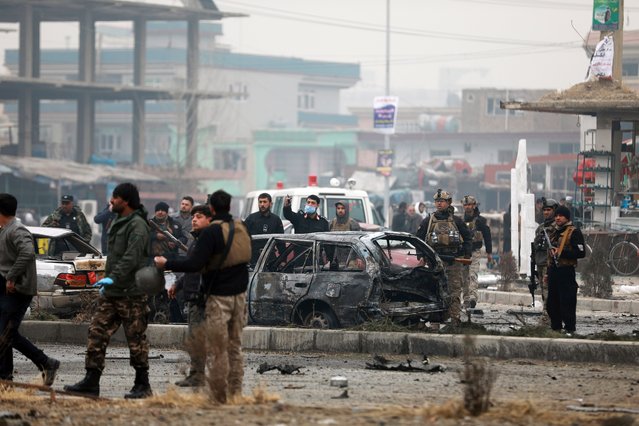 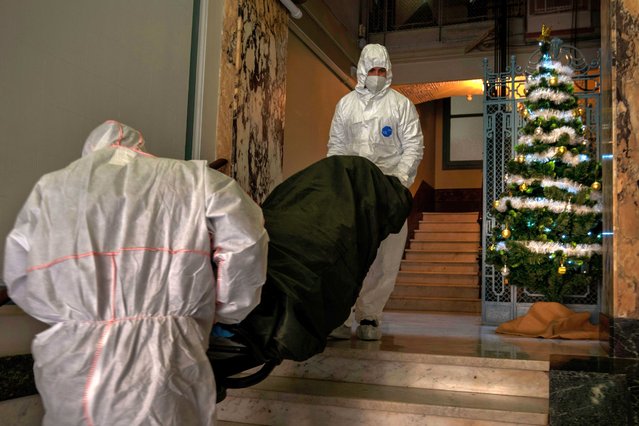 Mortuary workers walk past a Christmas tree as they remove the body of an elderly person who died of COVID-19 from a nursing home in downtown Barcelona, Spain, Wednesday, December 23, 2020. (Photo by Emilio Morenatti/AP Photo) 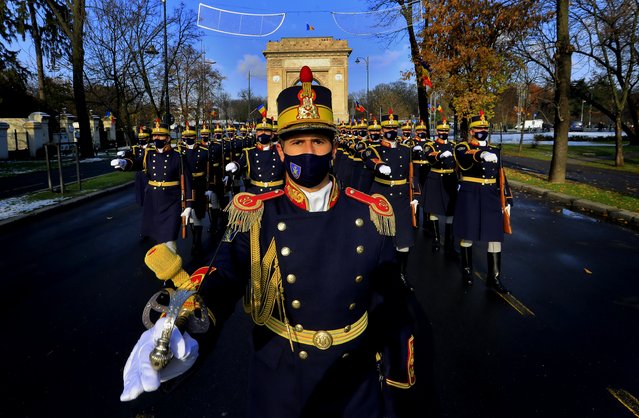 Soldiers of to the Romanian Presidential Honor Guard wearing protection masks march in front of the Triumph Arch during a small ceremony organized to mark Romania's Great Union Day, in Bucharest, Romania, 01 December 2020. Due to the COVID-19 pandemic safety reasons, the event that was marked in recent years with a big military parade, was restricted to a small ceremony without public. Romania is celebrating Great Union Day which commemorates the unification of the three historical provinces of Transylvania, Basarabia and Bucovina with Romania in 1918. (Photo by Robert Ghement/EPA/EFE) 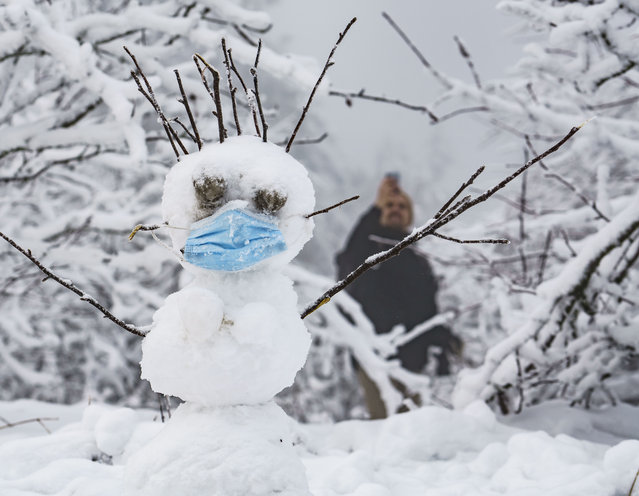 A snowman with mouth and nose protection stands on the snow-covered summit plateau of the Grosser Feldberg in the Taunus Mountains, Germany, Monday, December 7, 2020. (Photo by Frank Rumpenhorst/dpa via AP Photo) 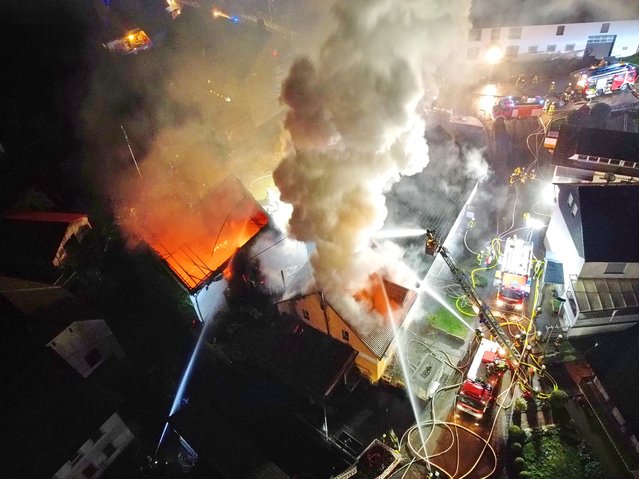