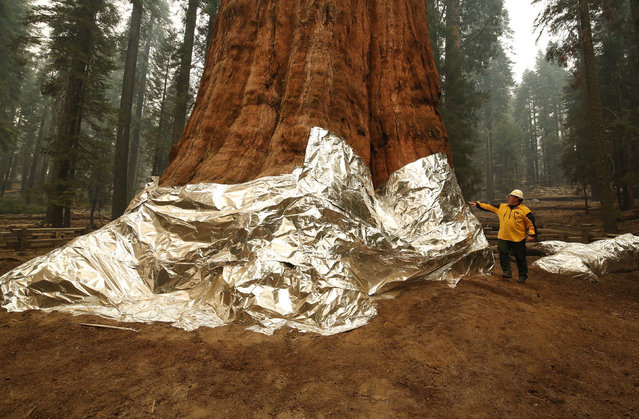 Operations Section Chief, Jon Wallace looks over General Sherman where the historic tree was protected by structure wrap from fires along with the Four Guardsmen at Sequoia National Park, California, September 22, 2021. Hundreds of firefighters were battling to protect several groves of giant sequoias in the United States on September 20, warning the enormous ancient trees were at risk from out-of-control blazes. (Photo by Gary Kazanjian/Pool via AFP Photo) 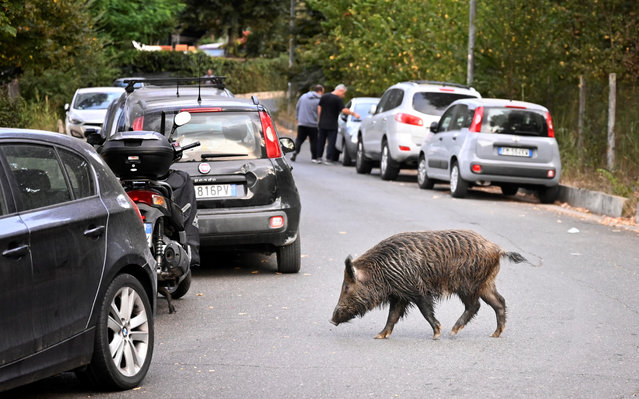 A wild boar in Rome, on September 27, 2021. Rubbish bins have been a magnet for the families of boars who emerge from the extensive parks surrounding the city to roam the streets scavenging for food. (Photo by Alberto Pizzoli/AFP Photo) 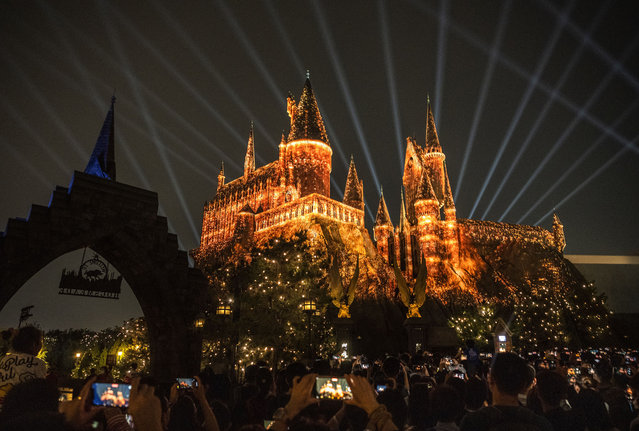 People watch a light show over Hogwarts Castle in the Wizarding World of Harry Potter attraction at Universal Studios Beijing on September 23, 2021 in Beijing, China. Universal Studios Beijing Resort which features attractions from some of the company's famous film brands including Harry Potter, Transformers, Minions Kung Fu Panda and others as well as restaurants, hotels and a city-walk, officially opened to sell-out crowds on September 20th. It is Universal Studios' fifth global theme park, and is a joint venture between state-owned Beijing Shouhuan Cultural Tourism Investment Co. and Universal Parks & Resorts, a business unit of Comcast NBCUniversal. The park opens at a time of strained U.S. and China relations. (Photo by Kevin Frayer/Getty Images) 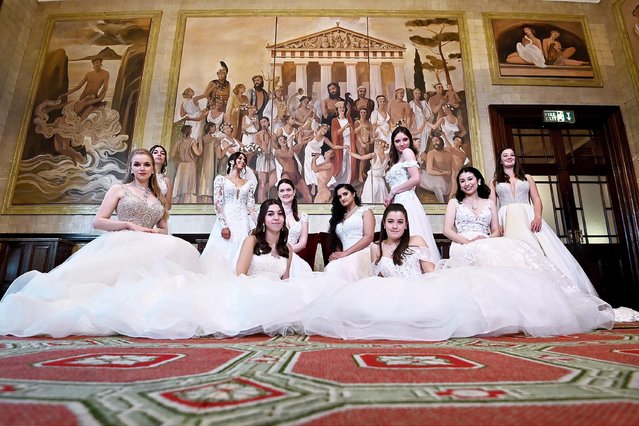 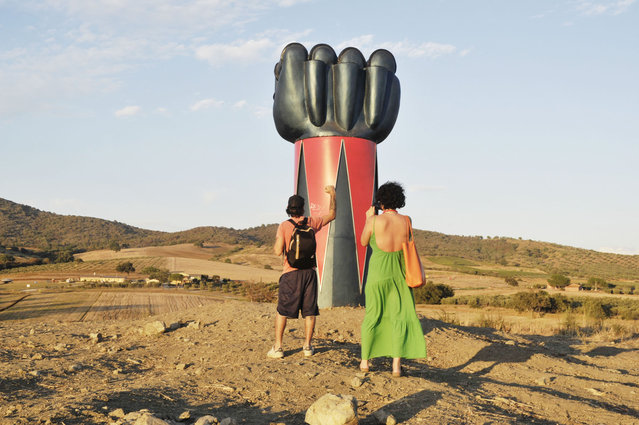 Visitors view a monument dedicated to the Japanese anime television series hero Ufo Robot Goldrake (or Grendizer as it is also known) called Totem by the artist Moira Ricci in Collecchio Fonteblanda during Hypermaremma on September 29, 2021 near Grosseto, Italy. (Photo by Laura Lezza/Getty Images)

People walk with torches in the celebration of the Civic Procession of Vitor, on 27 September, 2021 in Mayorga, Valladolid, Castilla y Leon, Spain. After two years without being able to carry out this procession due to the coronavirus crisis, this September 27 the Valladolid town of Mayorga celebrates its traditional parade in which the villagers walk with torches, made with grape skins, from the house of Santo Toribio de Mogroviejo to the hermitage. The burning of the skins, an act programmed as part of the patron saint's festivities, commemorates the arrival of the relics of the Saint to his birthplace. During the parade, songs and fireworks enliven the walk to conclude the celebration in the local peñas. (Photo By Emilio Fraile/Europa Press via Getty Images) 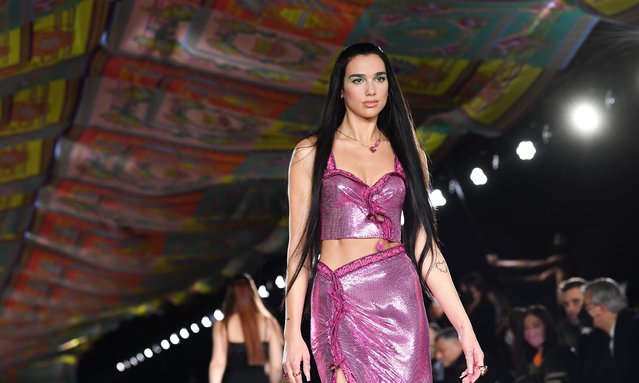 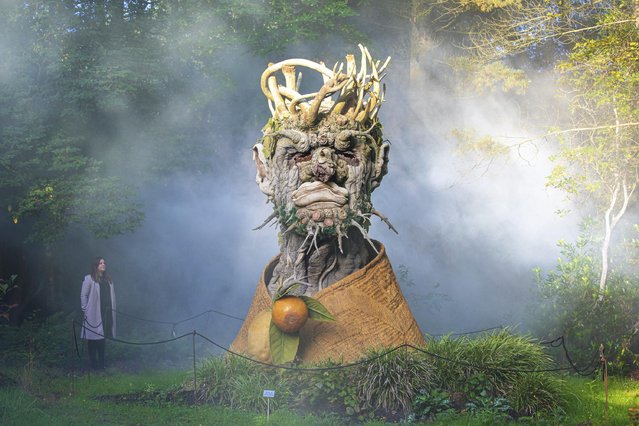 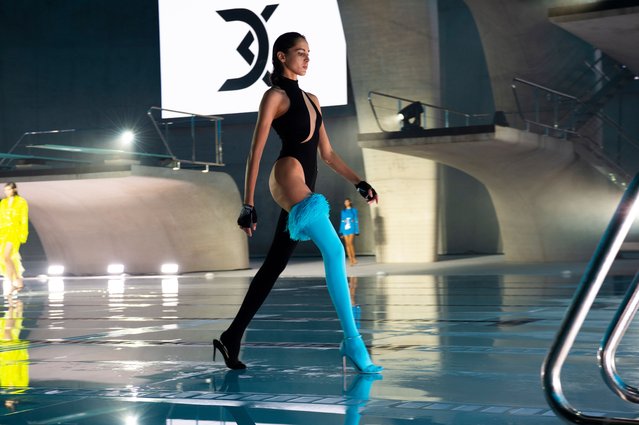 A model walks the runway at the David Koma show during London Fashion Week September 2021at London Aquatics Centre Olympic Park on September 17, 2021 in London, England. (Photo by @paigetobin/The Guardian) 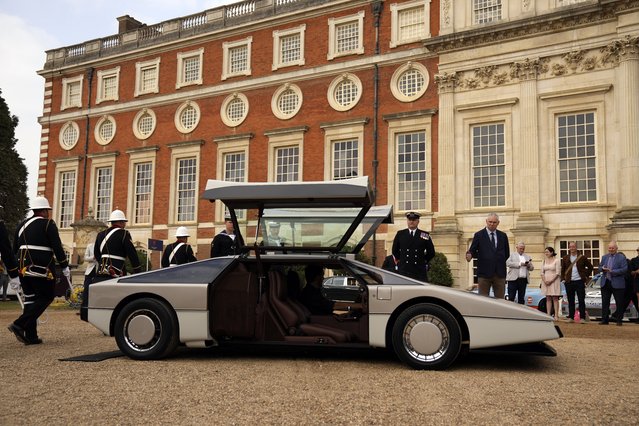 The Aston Martin Bulldog, which is a 1979 one-off concept vehicle and the only one of its kind ever made, stands unveiled after being restored after laying dormant for 35 years, at Hampton Court Palace, in south west London, Friday, September 3, 2021. It was originally designed with the aim of being the fastest on the road production car in the world, clocking up a speed of 192 miles an hour at a test track, with the aim now being to get the car to reach 200 miles an hour after its recent restoration. (Photo by Matt Dunham/AP Photo) 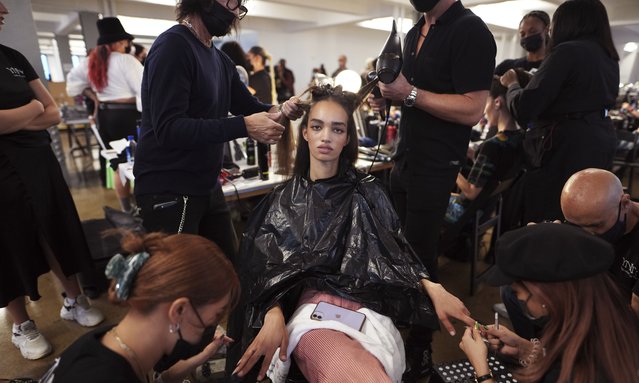 A model gets her hair and nails done backstage in preparation for the LaQuan Smith fashion show during New York Fashion Week on Thursday, September 9, 2021, n New York. (Photo by Charles Sykes/Invision/AP Photo) 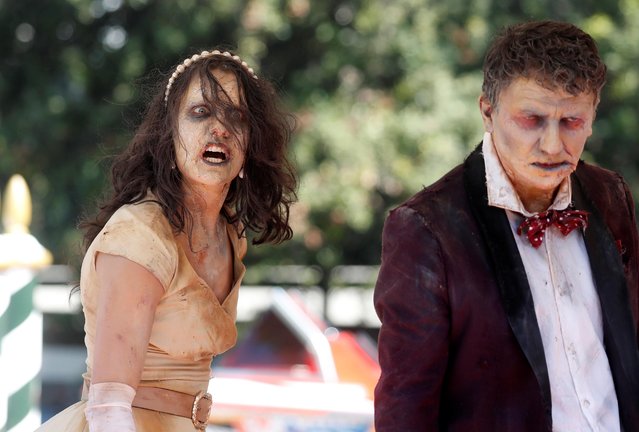 Performers dressed as zombies arrive to the pier of the Excelsior Hotel on September 6, 2021 during the 78th Venice Film Festival at Venice Lido. (Photo by Yara Nardi/Reuters) 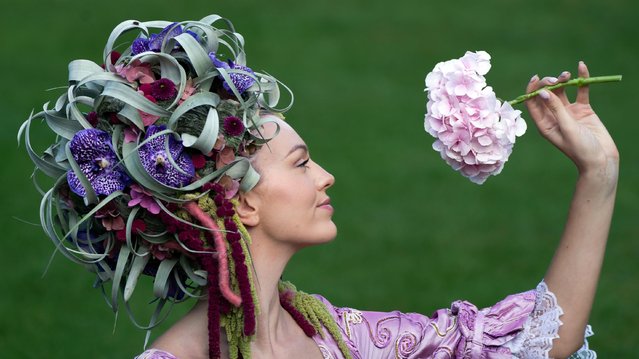 Gemma Sadler models a fabulous Georgian costume, including a wig made from flowers and foliage created by Florist of the Year Helen James, during the staging day for the 2021 Harrogate Autumn Flower Show at Newby Hall, near Ripon, United Kingdom on Thursday, September 16, 2021. (Photo by Danny Lawson/PA Images via Getty Images) 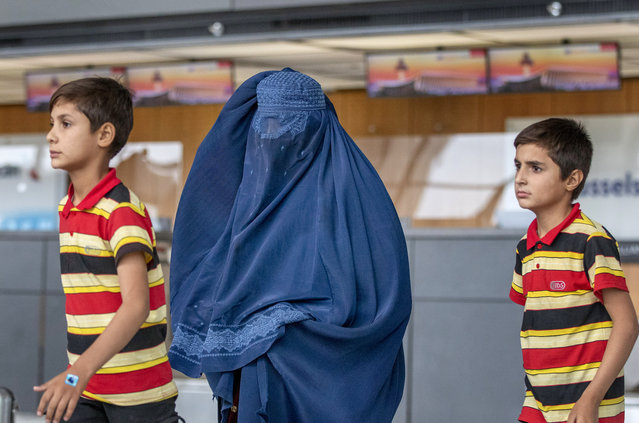 Families evacuated from Kabul, Afghanistan, walk through the terminal to board a bus after they arrived at Washington Dulles International Airport, in Chantilly, Va., on Wednesday, September 1, 2021. (Photo by Gemunu Amarasinghe/AP Photo) 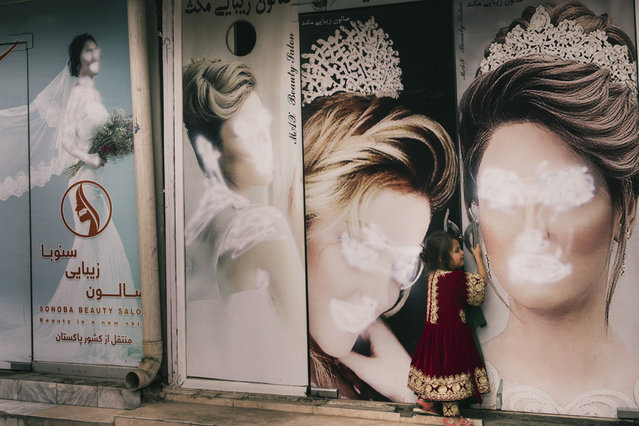 Images of women have been painted over outside many beauty parlors in Kabul, Afghanistan, on September 20, 2021. Even if the Taliban have not ordered to delete images of women the owners of the shops often have painted over the images in fear that the Taliban might damage the shop. (Photo by Lorenzo Tugnoli/The Washington Post) 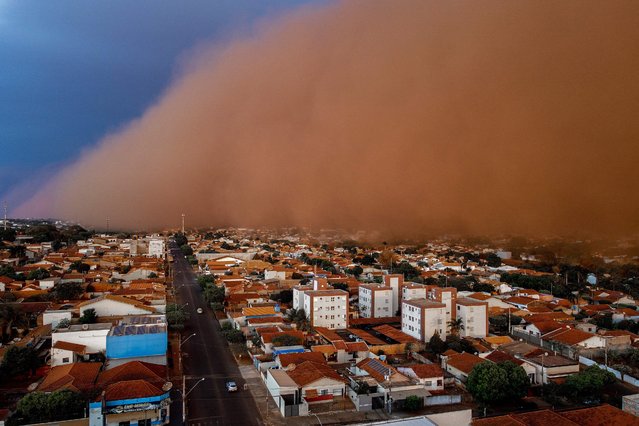 A massive dust storm is seen engulfing the neighbourhood of Nossa Senhora do Carmo at the city of Frutal, Minas Gerais state, Brazil, on September 26, 2021. The dust storm was seen in several cities of the states of Sao Paulo and Minas Gerais, southeast region of Brazil, followed by heavy rains that spread damages in the region. (Photo by Andrey Luz/AFP Photo) 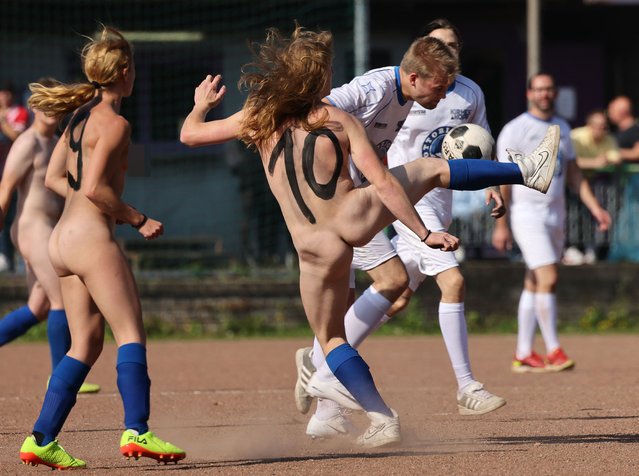 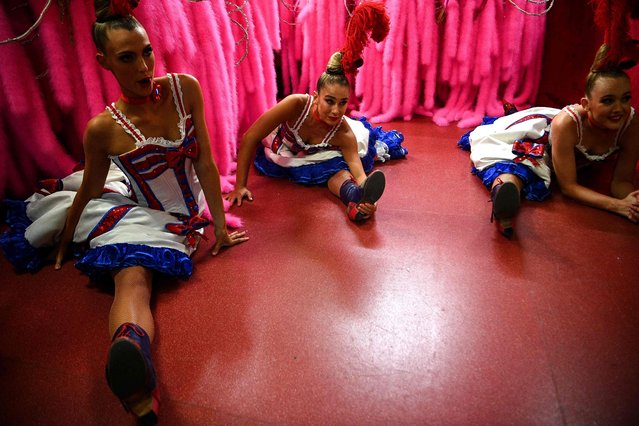 Dancers warm up in the wings before performing in a full-dress rehearsal at the Moulin Rouge in Paris on September 8, 2021, two days ahead of the reopening of the cabaret following an 18-month closure amid the COVID-19 pandemic. Closed for a year and a half due to the pandemic, the Moulin Rouge and Le Lido, emblems of the crazy Parisian nights since 1889, are finally reopening. (Photo by Christophe Archambault/AFP Photo)
Edit Del
21 May 2022 05:13:00, post received 0 comments
Publication archive:
←   →
Popular tags:
All tags
Last searches: