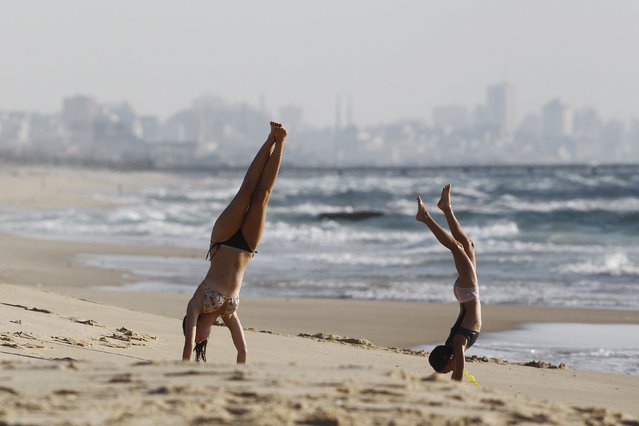 Israeli girls play on Zikim beach at the Mediterranean sea as the northern Gaza Strip is seen in the background August 12, 2014. (Photo by Amir Cohen/Reuters) 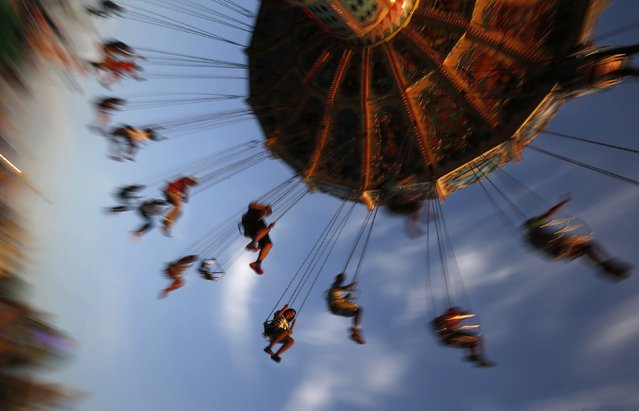 People ride on a swing at the Wisconsin State Fair in West Allis, Wisconsin, August 9, 2014. The fair started over 150 years ago and mixes agricultural exhibits with amusements rides. (Photo by Jim Young/Reuters) 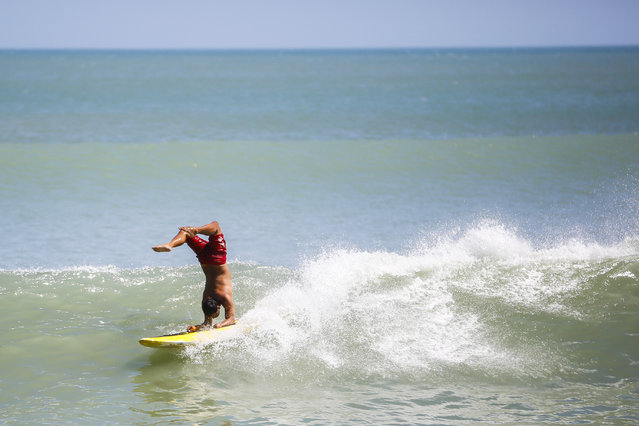 Tourists surf at a beach in Kuta, Bali, Indonesia, August 13, 2014. In the first half of 2014 the number of tourists visiting Indonesia increased by about 9.6 percent to 4.55 million from 4.15 million visitor in the same period last year. Indonesia may achieve about 14 percent growth in foreign tourist arrivals in 2014, according to the World Travel & Tourism Council (WTTC). (Photo by Made Nagi/EPA) 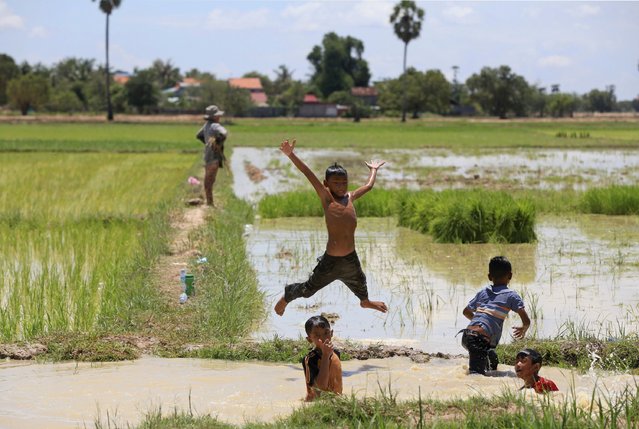 Boys play at a canal of a rice paddy field on the outskirts of Phnom Penh August 20, 2014. (Photo by Samrang Pring/Reuters) 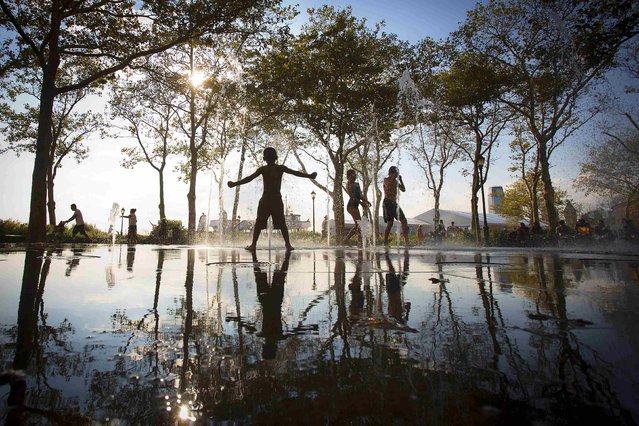 Children play in a fountain in the late afternoon sun in the Lower Manhattan borough of New York August 25, 2014. (Photo by Carlo Allegri/Reuters) 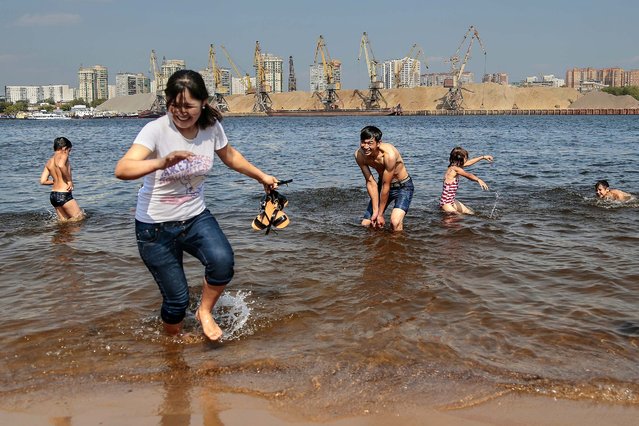 People cool themselves off on the banks of the Moskva river in Moscow, Russia, on August 12, 2014. (Photo by Ivan Sekretarev/Associated Press) 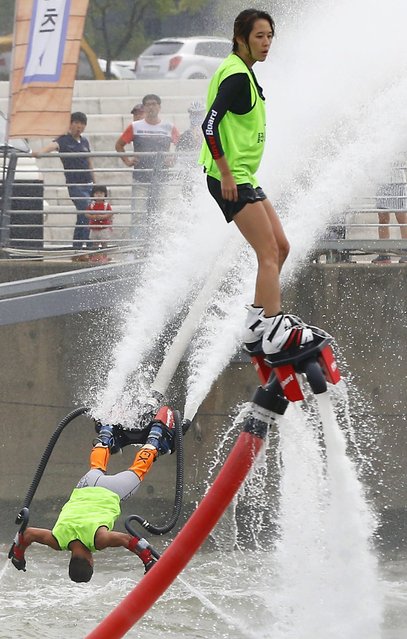 People use water jet pack machines during a flyboard competition on the Han River in Seoul South Korea, 24 August 2014. (Photo by EPA/Yonhap) 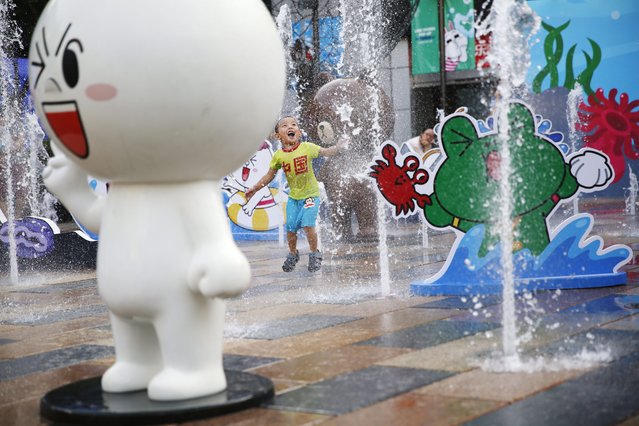 A Chinese boy wearing a T-shirt with Chinese words “China” plays among pop ups of “Line Friends”, characters of emojis from Japanese chat application Line in a shopping mall in Beijing, China, 11 August 2014. China had announced new rules last week to restrict instant mobile messaging service providers and users which is seen widely as targeting popular messaging application Wechat though foreign based apps like KakaoTalk and Line's services were reported disrupted in July. The new rules require public-account users to sign up with their real names and bar the posting or reposting of political news without government approval. (Photo by How Hwee Young/EPA) 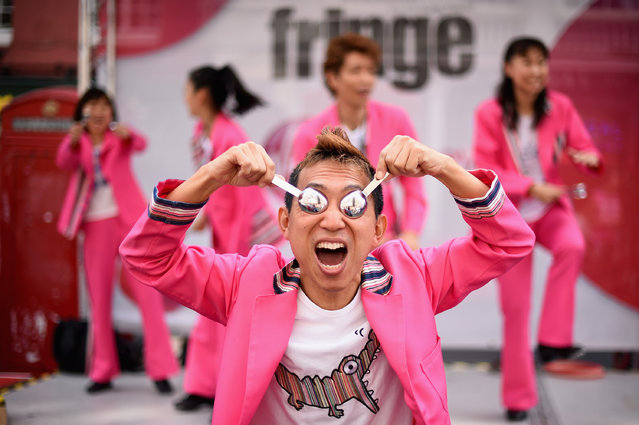 Sushi Tap Show perform in the Edinburgh Festival Fringe on the Royal Mile on August 14, 2014 in Edinburgh, Scotland. The largest performing arts festival in the world, this year's festival hosts more than 3,000 shows in nearly 300 venues across the city. (Photo by Jeff J. Mitchell/Getty Images) 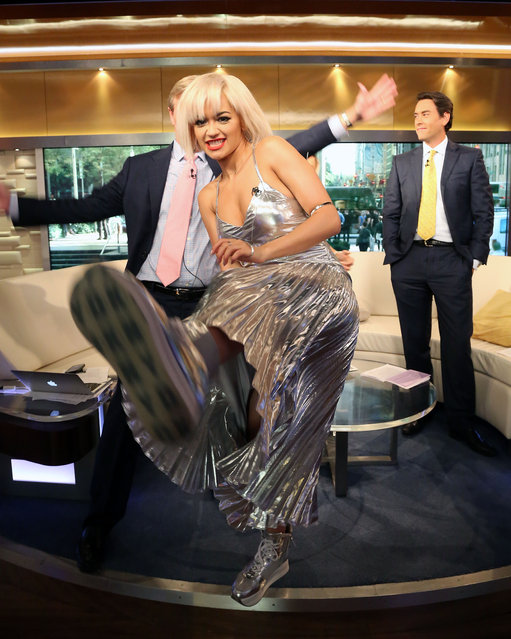 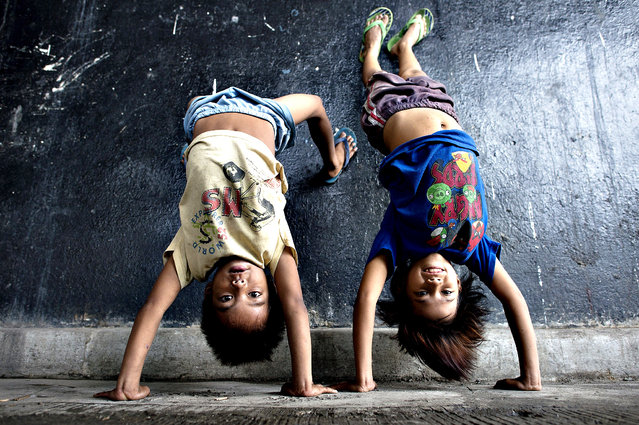 Children display their acrobatic skills at an underpass in Manila on August 28, 2014 near where informal settlers' homes were recently demolished. The Philippine economy rebounded to post 6.4-percent growth in the second quarter and regain its status as one of the strongest in Asia, authorities said on August 28. Officials said in April that amongst their new targets is the lowering of the country's poverty incidence from 25.2 percent of the population in 2012 to 18.0 to 20.0 percent by 2016. (Photo by Noel Celis/AFP Photo) 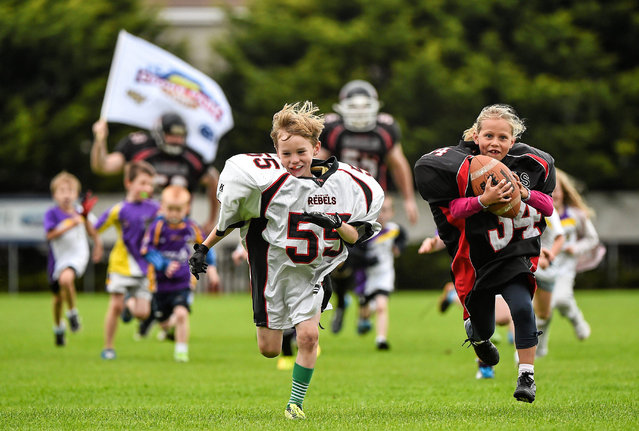 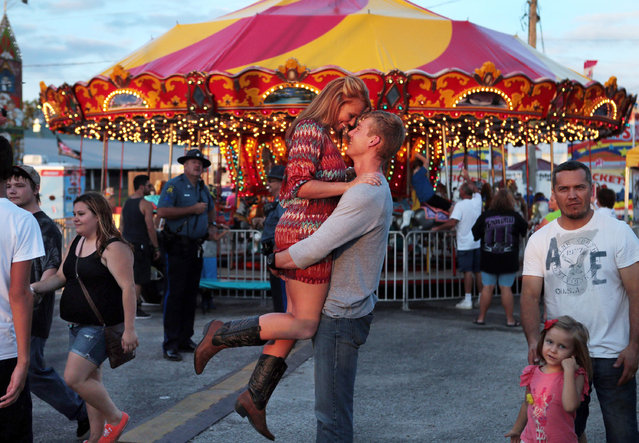 In this Thursday, August 7, 2014 photo, A.J. Pfeifer, 24, lifts his girlfriend Beth Crow, 20, so their friend can make a photo of them in front of the carousel on the opening day of the Missouri State Fair on Thursday, August 7, 2014, in Sedalia, Mo. The couple came to the fair to listen to the Nace Brothers concert. (Photo by Laurie Skrivan/AP Photo/St. Louis Post-Dispatch) 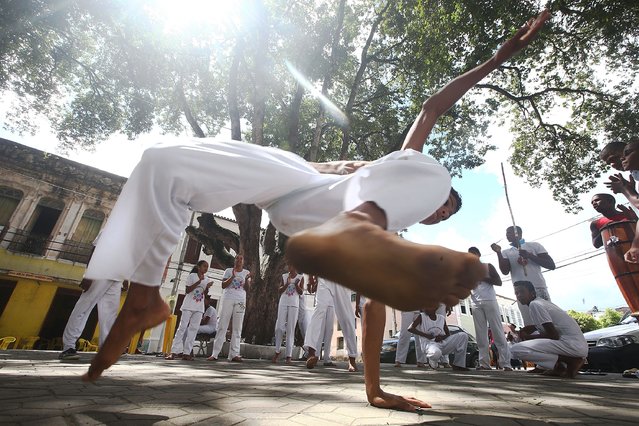 Teens perform capoeira during the Festival of the Good Death on August 17, 2014 in Cachoeira, Brazil. The Afro-Brazilian Sisterhood of the Good Death is made up of female descendants of slaves, all age 50 and over, and honors both Catholic traditions and Afro-Brazilian Candomble religious rites. The sisterhood is believed to be the oldest organization for women of African descent in the Americas. The state of Bahia received at least 1.2 million slaves from Africa and remains the most African of Brazilian states, where blacks make up around 80 percent of the population. (Photo by Mario Tama/Getty Images) 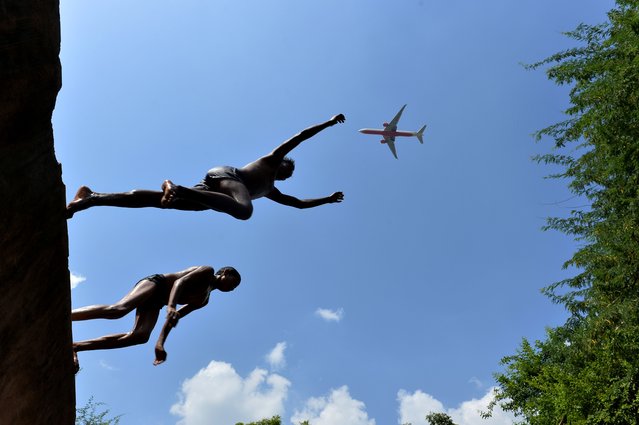 A plane flies overhead as Indian youth jump into the water at the Gandak ki Baoli, “a well with steps” which was constructed during the rule of Emperor Iltutmish who was also the founder of the slave dynasty, in New Delhi on August 26, 2014. Emperor Iltutmish founded the Delhi Sultanate and ruled from 1211. (Photo by Chandan Khanna/AFP Photo) 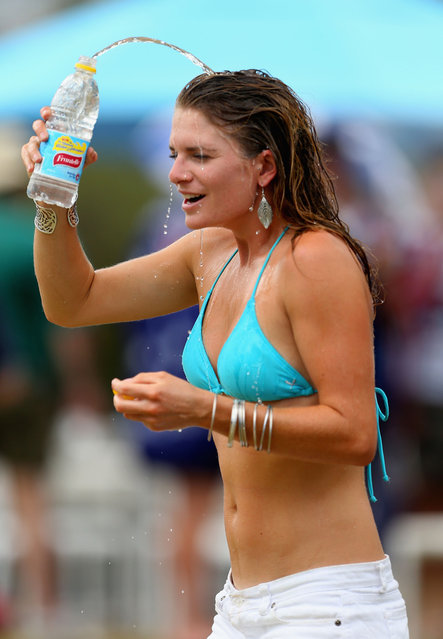 A tennis fans cools off during day four of the 2013 Australian Open at Melbourne Park on January 17, 2013 in Melbourne, Australia. (Photo by Lucas Dawson/Getty Images) 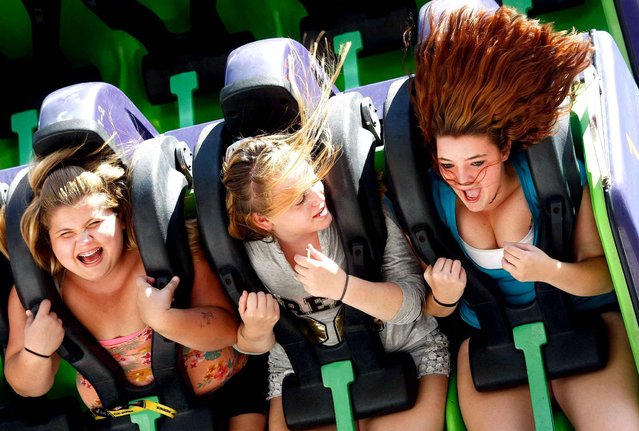 From left, friends Latisha Case, 16, Laurastina Coffman, 16, and Amber Neeman, 16, all of Roseburg, Ore. take a spin on a ride at the Douglas County Fair in Roseburg August 8, 2014. (Photo by AP Photos/The News-Review) 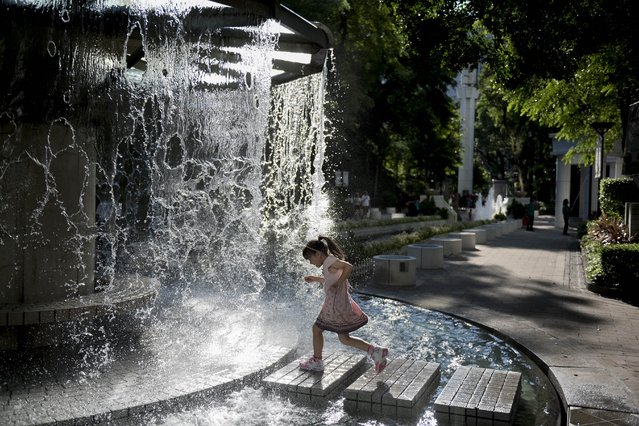 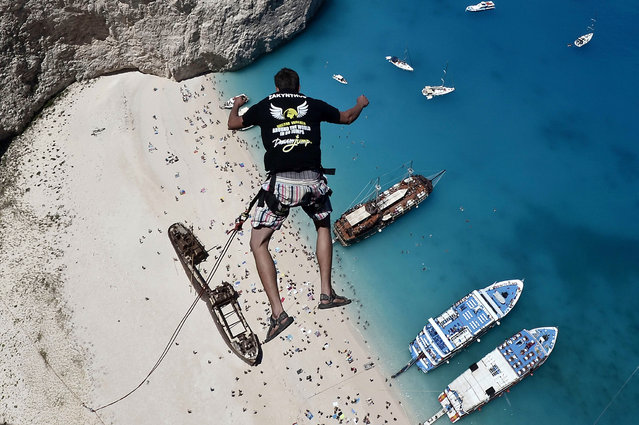 Lukas Michul, a member of the “dream walker” group jumps from atop the rugged rocks overlooking the azure waters of Navagio beach, one of the Greece's most renowned leisure spots on the popular tourist island of Zakynthos on June 23, 2014. This is rope jumping – part diving, part rock climbing, with a touch of engineering. The aim of the project is to dream jump in 80 places with most ravishing nature and architecture all over the world .They plan to stage their next leaps at a cave complex in Croatia, a French viaduct, skyscrapers in Las Vegas and Johannesburg, and the Grand Canyon. (Photo by Louisa Gouliamaki/AFP Photo) 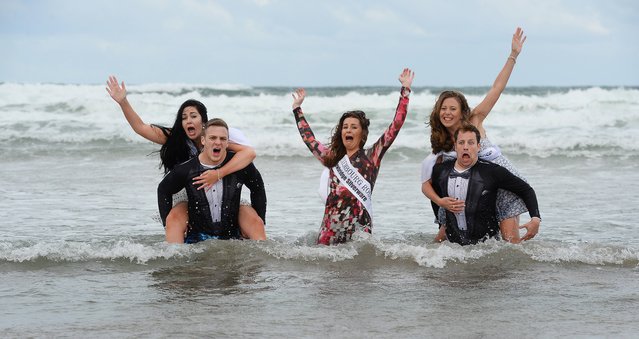