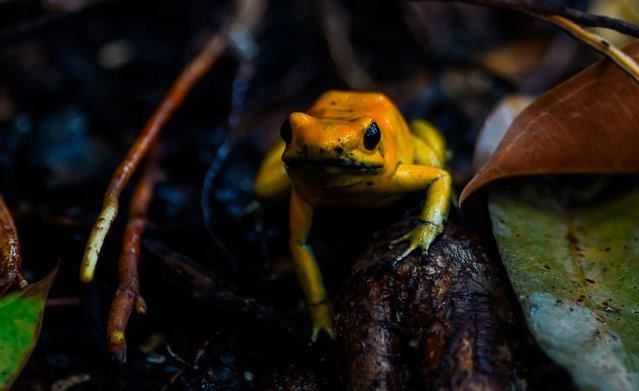 A golden poison frog (Phyllobates terribilis) is pictured at the Santa Fe zoo, in Medellin, Antioquia Department, Colombia, on March 21, 2018. The Intergovernmental Science- Policy Platform on Biodiversity and Ecosystem Services (IPBES) meeting, which is taking place in Medellin, opened on March 17 by stating that protecting biodiversity is “as important as fighting climate change”. (Photo by Joaquin Sarmiento/AFP Photo) 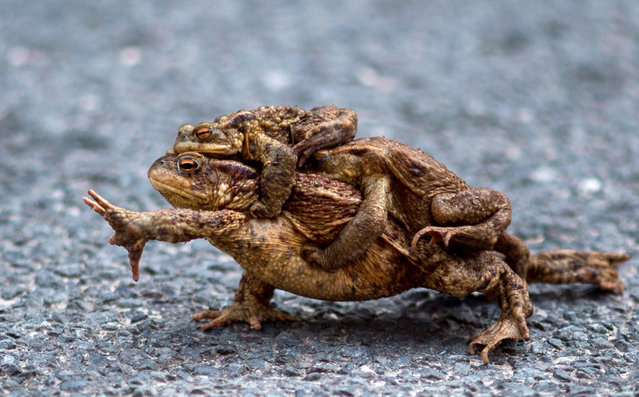 A picture taken on April 10, 2018 in the German village of Altenbrak shows a common toad carrying two males on its back on the side of a road nearby a pond. (Photo by Klaus- Dietmar Gabbert/AFP Photo/DPA) 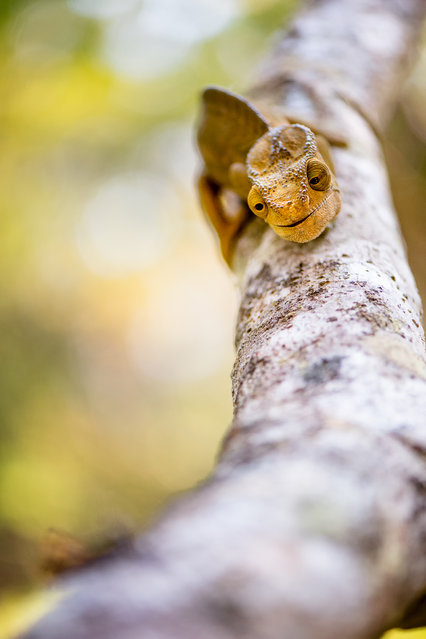 A chameleon sits on a branch, taken in Madagascar, Africa, November 2016. A little chameleon appears very pleased with itself, as it manages to catch its lunch in a split second. Known for their unique characteristics, a chameleon can reach its prey within 0.07 seconds by projecting their tongue more than twice their body length. The sticky tip of the tongue then attaches to the doomed insect, and recoils back into the chameleon’s hungry mouth. This smug chameleon was caught on camera by wildlife photographer Yulia Sundukova in November 2016. (Photo by Yulia Sundukova/Barcroft Images) 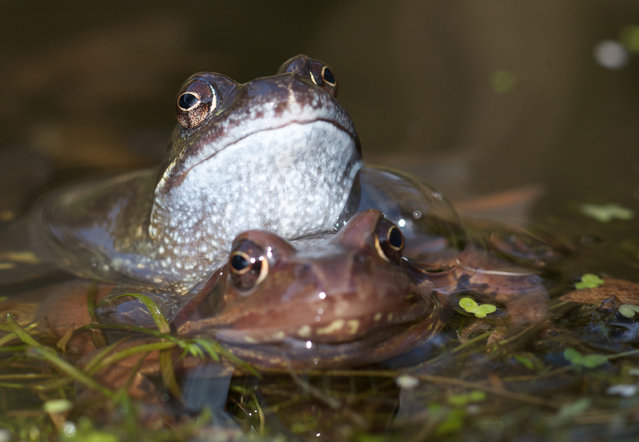 A male frog embraces a female in a pond in the UK. Males have nuptial pads that help them to hold on during amplexus, a coupling that can last for days as the male waits for the female to lay her eggs. (Photo by John Beatty) 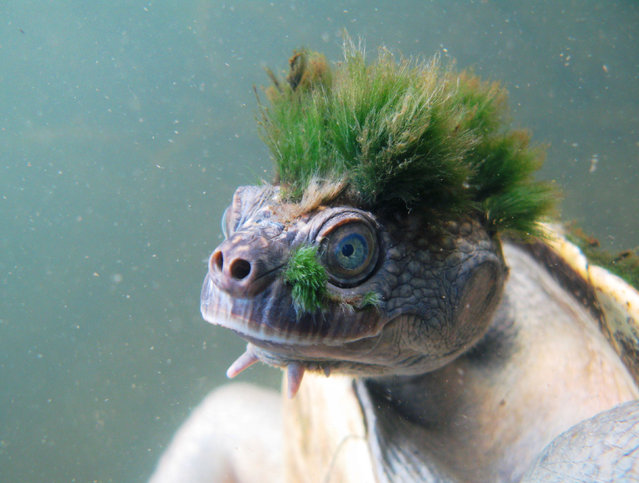 A Mary River turtle, one of hundreds of species on the Zoological Society of London’snew Evolutionarily Distinct and Globally Endangered Reptiles list. (Photo by Chris Van Wyk/ZSL/PA Wire) 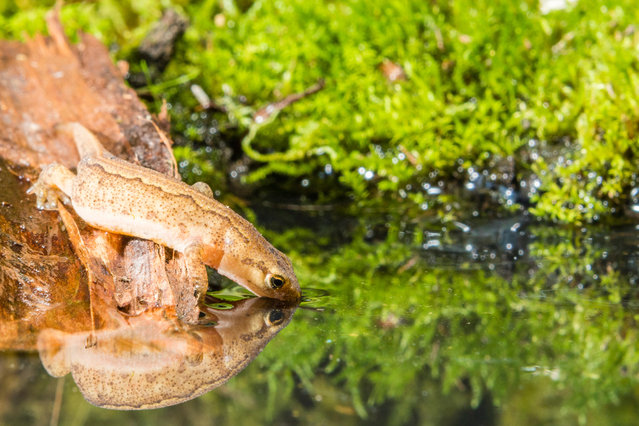 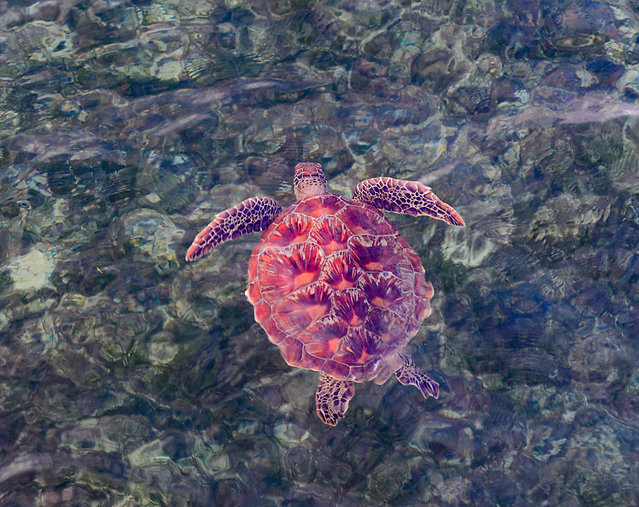 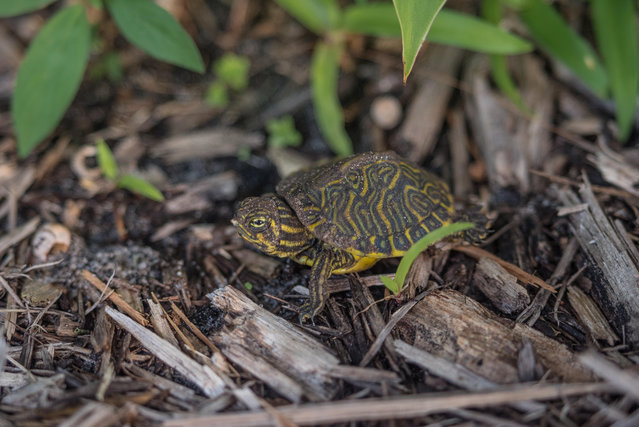 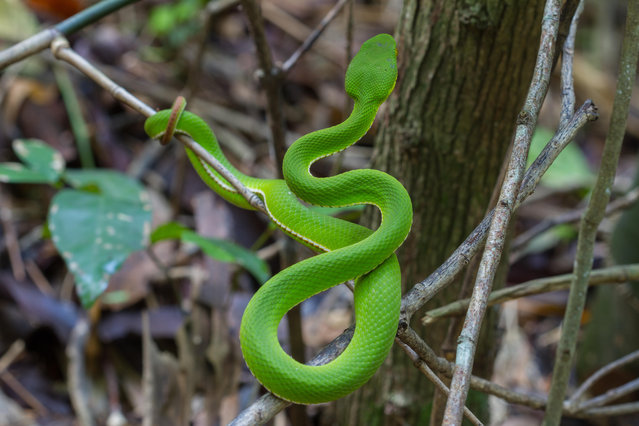 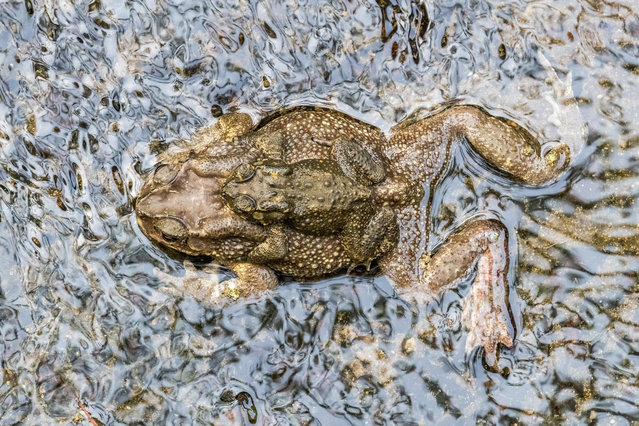 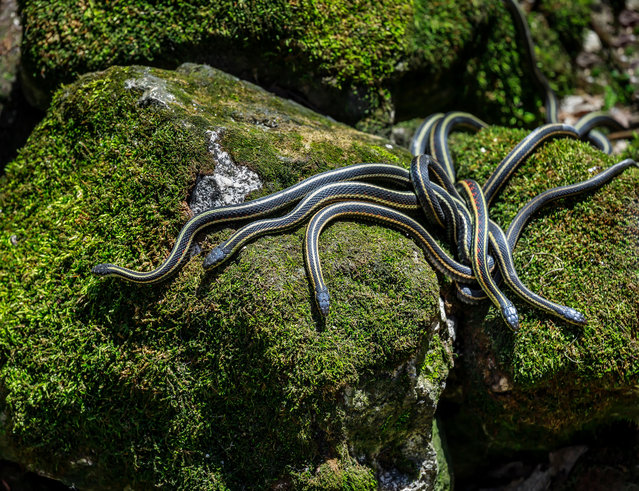 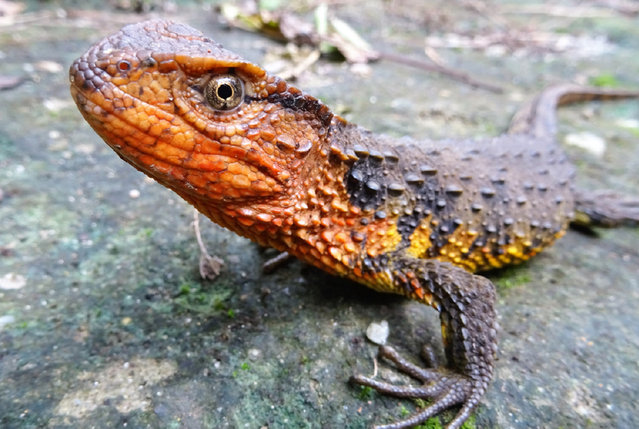 A Vietnamese crocodile lizard, one of the 115 new species, including 11 amphibians, 2 fish, 11 reptiles and 88 plants, that were discovered in the Greater Mekong region in 2016. (Photo by Thomas Ziegler/WWF/PA Wire) 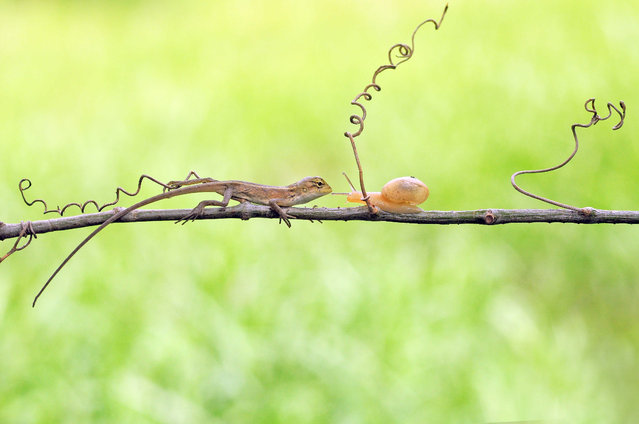 An oriental garden lizard and snail face each other on a branch on December 21, 2014, in Jakarta, Indonesia. (Photo by Andri Priyadi/Barcroft Media) 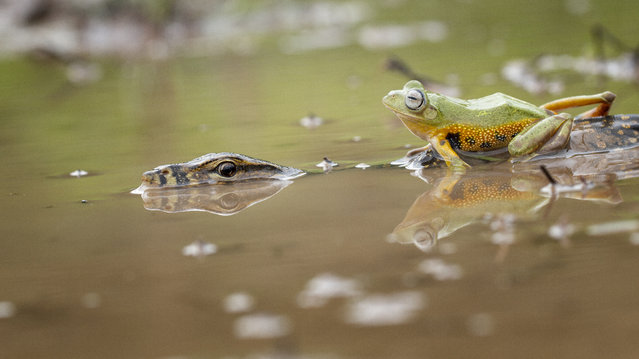 A flying frog cheekily clambers on top of a lizard in West Kalimantan, Indonesia. (Photo by Hendy Mp/Barcroft Media) 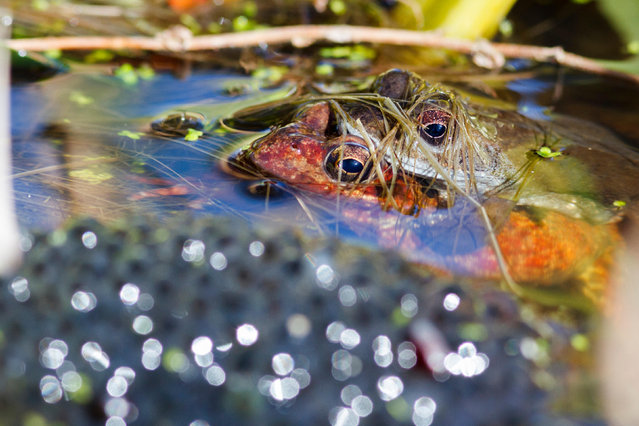 Two common frogs mating next to a pile of spawn, a sure sign that spring is under way, in Hailsham, East Sussex, UK. (Photo by Ed Brown/Alamy Stock Photo) 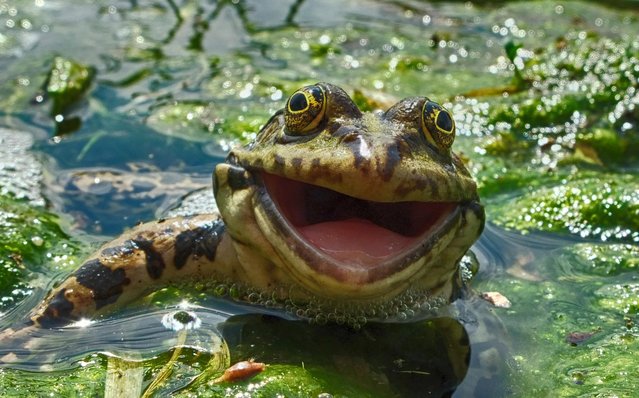 Rob Kroenert wins one of the Highly Commended certificates for his image of a grizzly bear doing a bad job of catching a salmon at Brooks Falls on July 18, 2014 in Katmai National Park, Alaska. (Photo by Nicolas de Vaulx/Barcroft Images) 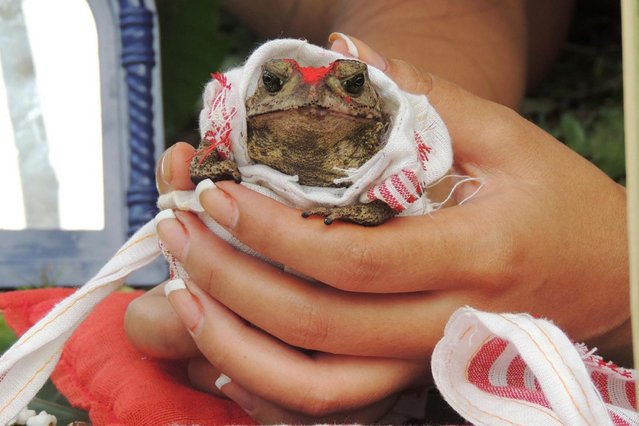 A girl holds a frog during its wedding ceremony at Naharkatia in Assam, India. (Photo by Manash Pratim Gogoi/Barcroft India) 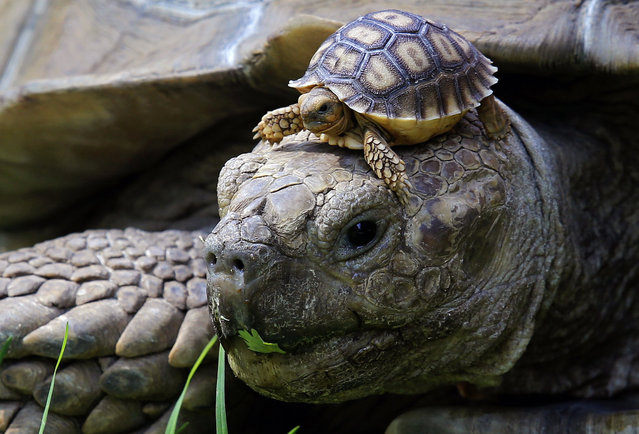 One of the five newborn African spurred tortoise (Centrochelys Sulcata) remains atop a male turtle, at the zoo, in Guadalajara, Mexico, Jalisco state, on May 17, 2018. (Photo by Ulises Ruiz/AFP Photo) 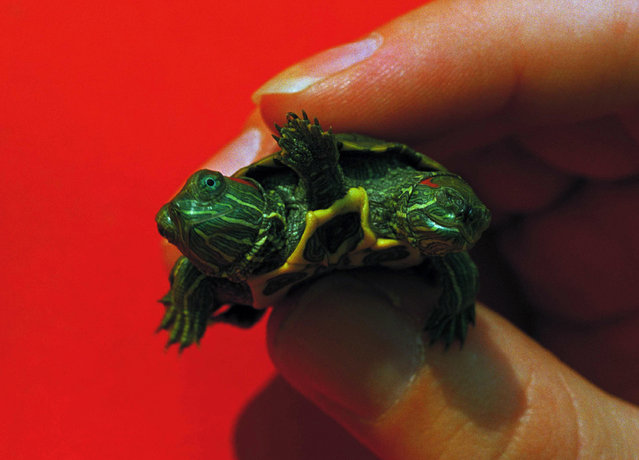 A turtle born with two heads and an extra set of legs between them is held by an employee of a Jenkintown, Pa., pet store on September 22, 1986. The owner of the store said while it was the strangest thing he'd ever seen he had no idea how long it would live. (Photo by Rusty Kennedy/AP Photo) 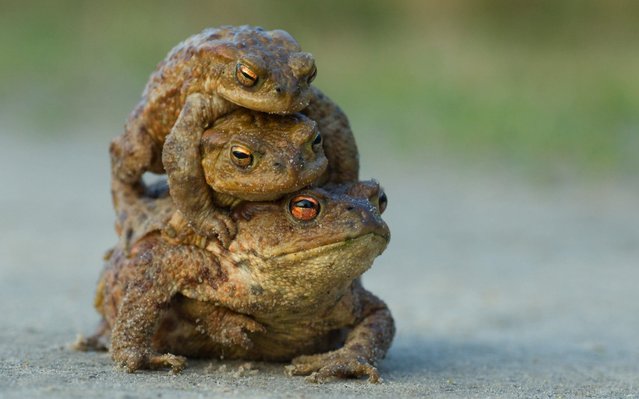 A photographer in Somerset captured the mating rituals of toads as several males attempt to mate with one female all at once. (Photo by John Waters/NPL)
Edit Del
27 May 2018 00:03:00, post received 0 comments
Publication archive:
←   →
Popular tags:
All tags
Last searches: