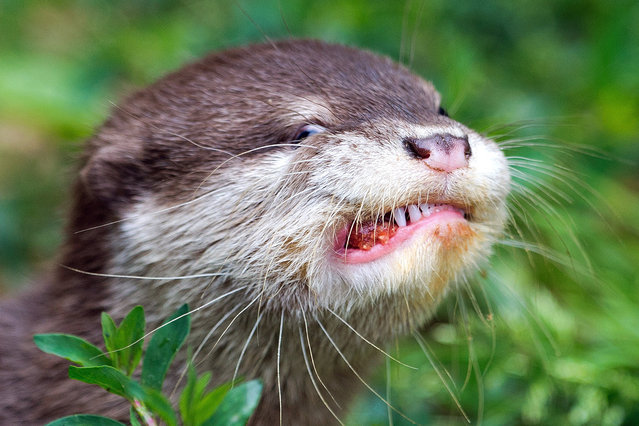 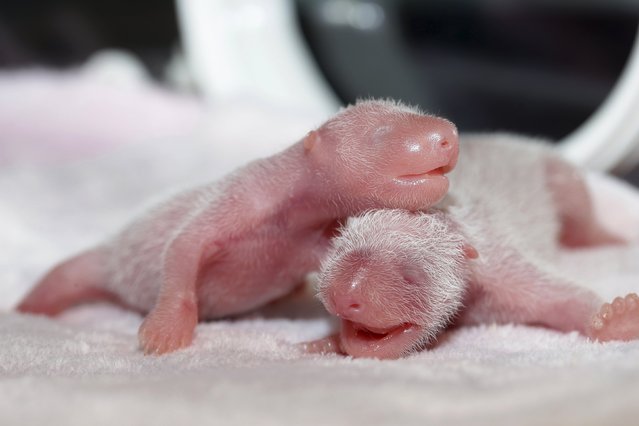 Newborn twin female panda cubs are seen inside an incubator at the Giant Panda Research Base in Chengdu, Sichuan province, China, June 22, 2015. Giant panda Ke Lin at the base gave birth to the female twins on Monday, local media reported. (Photo by Reuters/China Daily) 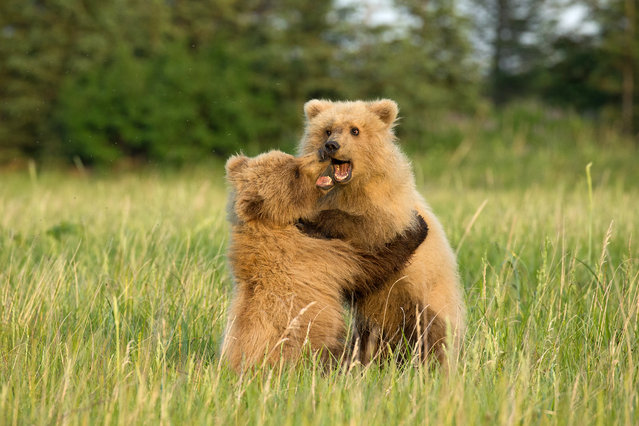 The cubs battle it out on June, 19, 2015, in Lake Clark, Alaska. Playful bear cubs lock paws and show their teeth during a harmless scrap in the grass. The young animals were spotted wrestling for roughly five minutes in Lake Clark, Alaska, by amateur photographer Greg Morgan. The US state has the highest amount of brown bears in the US, and is home to roughly 98% of the country's entire population of the species. (Photo by Greg Morgan/Barcroft Media) 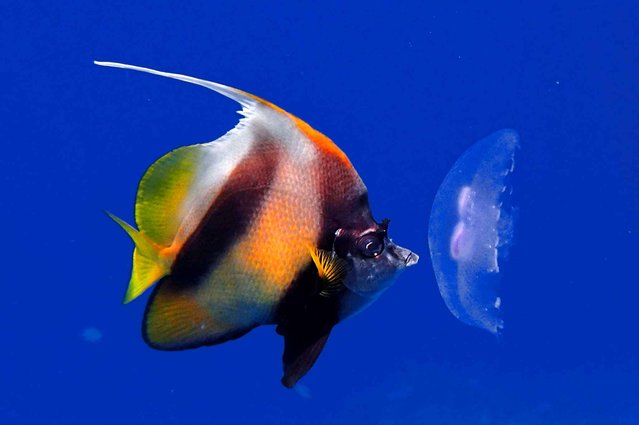 A fish eats a dead jellyfish near the surface of the Red Sea in the resort town of Sharm el-Sheikh, south Sinai, Egypt, Sunday, June 28, 2015. (Photo by Hassan Ammar/AP Photo) 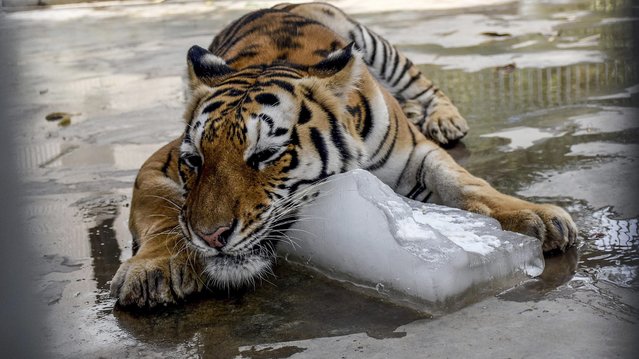 A Tiger cools off to beat the heat by embracing a large lump of ice at the Karachi Zoo, in Karachi, Pakistan, 24 June 2015. Caretakers at Karachi's zoo were working to keep animals cool during a deadly heatwave affecting southern Pakistan. The human toll from four days of sweltering conditions had risen to more than 800 by Wednesday, with some 4,000 people being treated at hospitals for heat stroke. Large animals – including elephants from Tanzania, white lions, and tigers from Bengal – have been deeply distressed due to the “unbearable” heat, said Tazeem Naqvi, a director at the facility. (Photo by Shahzaib Akber/EPA) 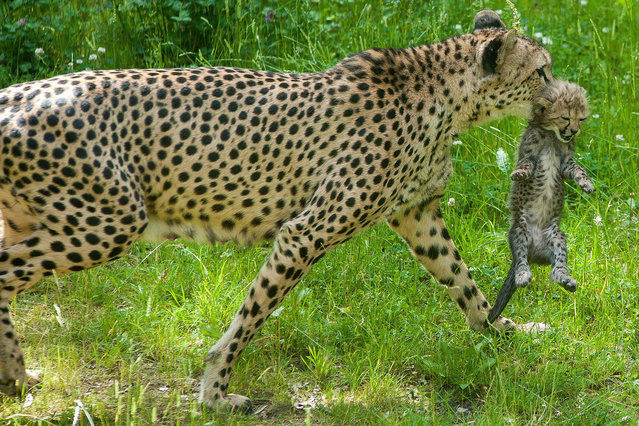 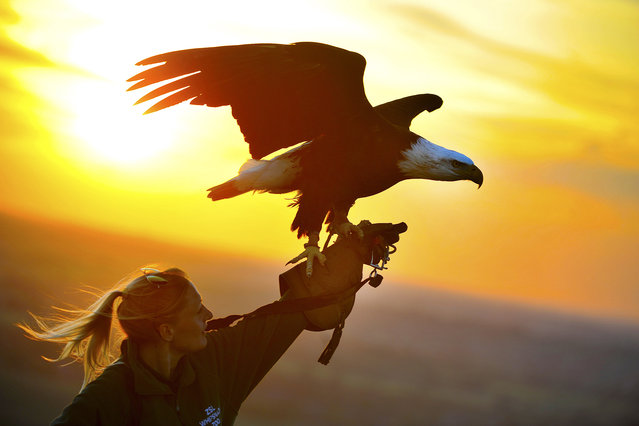 A bald eagle named Apache is having a special twilight training session with her keepers ahead of ZSL Whipsnade Zoo’s big Sunset Safari event on Saturday, June 27, 2015. Keepers wanted to ensure that Apache, who usually flies in the Zoo’s Birds of the World Live! demonstration during the day time, was ready for her dusk flight at the Zoo’s big family event, which takes place after normal Zoo opening hours. (Photo by UPPA/ZUMA Wire) 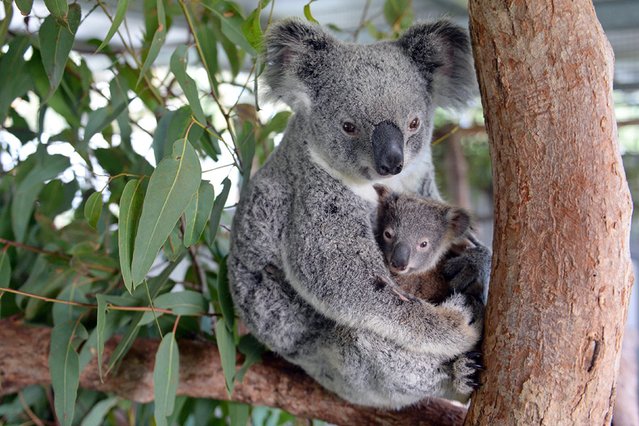 This undated handout picture taken recently by Ben Beaden and released to AFP by the Australia Zoo on June 16, 2015 shows Koala mum named “Lizzy” cuddling her baby “Phantom” at the Australia Zoo Wildlife Hospital at Beerwah in Queensland state. Lizzy is recovering well after her surgery last week while Phantom is putting on weight as well which is a great sign for the health of both mother and baby. Lizzy and Phantom were brought into the Australia Zoo Wildlife Hospital after Lizzy was hit by a car on the Warrego Highway near Coominya, west of Brisbane. (Photo by Ben Beaden/AFP Photo) 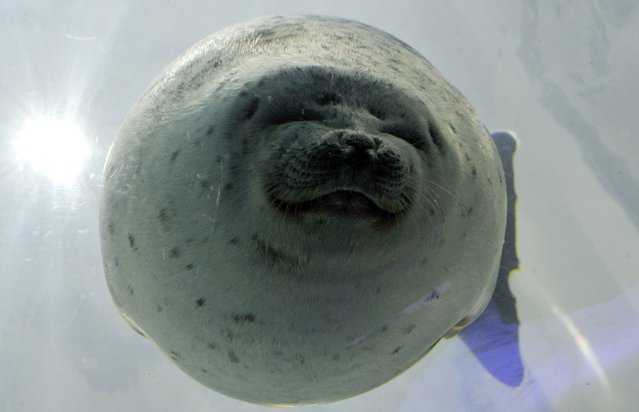 In this picture taken on June 24, 2015, a seal swims in an aquarium at the Osaka Aquarium, also known as Kaiyukan. (Photo by Toshifumi Kitamura/AFP Photo) 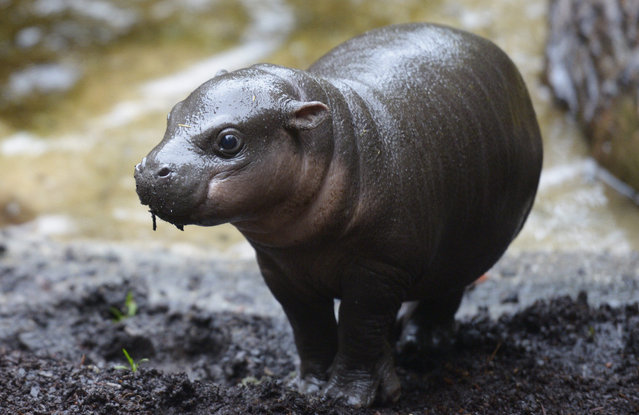 Obi, a male Pygmy Hippo calf, is seen inside its enclosure at the Melbourne Zoo, in Melbourne, Australia, 18 June 2015. Pygmy Hippos are endangered in the wild. (Photo by Tracey Nearmy/EPA) 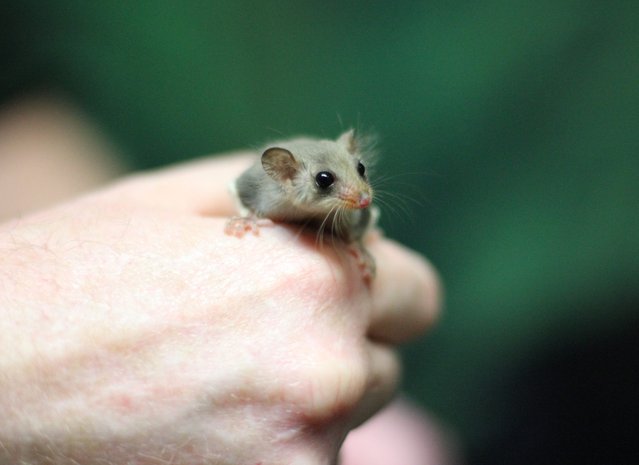 A handout picture made available by the Taronga Zoo shows a Feathertail Glider joey at Sydney's Taronga Zoo, Australia, 26 June 2015. Taronga is celebrating the birth of seven of the tiny Glider joeys. (Photo by EPA/Taronga Zoo) 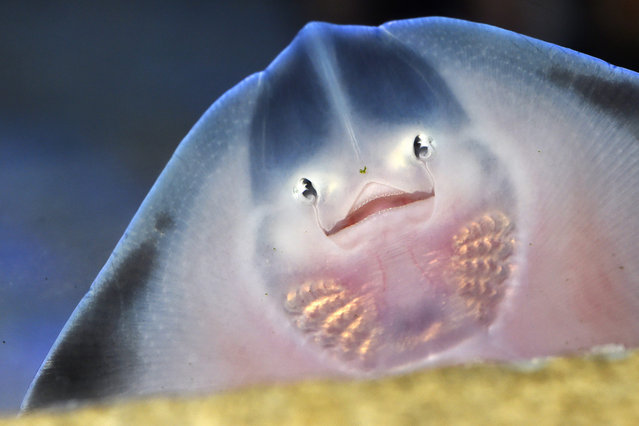 A palm-sized baby ray in its “Kindergarten Aquarium” at AquaDom Sea Life in Berlin, Germany, 17 June 2015. Five little two and three-month-old undulate rays, born in Sea Life Koenigswinter, are now being raised with young cat sharks in the “Kindergarten Aquarium” until they can move into the large undulate ray tank in a few months. The slots above the mouth that look like eyes are gills on the animal's underbelly. When fully-grown these endangered animals reach a range of one meter. (Photo by Jens Kalaene/EPA) 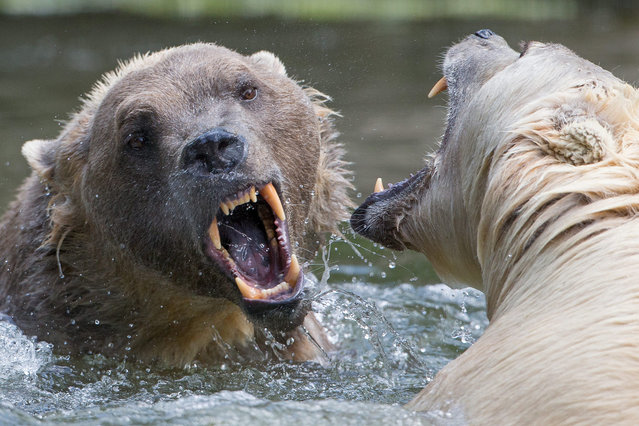 A picture made available on 15 June 2015 shows hybrid bears Tips (R) and her brother Taps at the Osnabrueck Zoo, in Osnabrueck, Germany, 11 June 2015. Hybrid bears (also known as Cappuccino-Bears) are a mix of polar bear and grizzly bear and are also called nanulak, pizzly bear, grolar bear and a variety of other names. (Photo by Friso Gentsch/EPA) 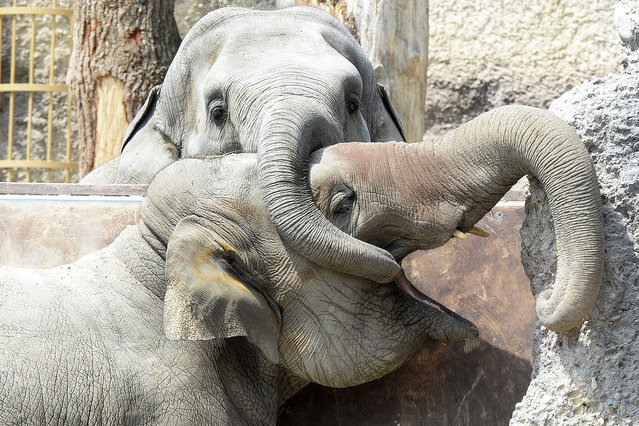 Elephants in their enclosure in the Kaeng Krachan Elephant Park of the Zuerich Zoo in Zuerich, Switzerland, 17 June 2015. (Photo by Walter Bieri/EPA) 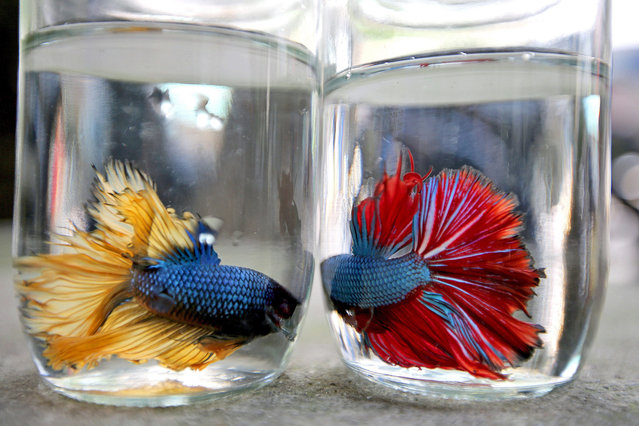 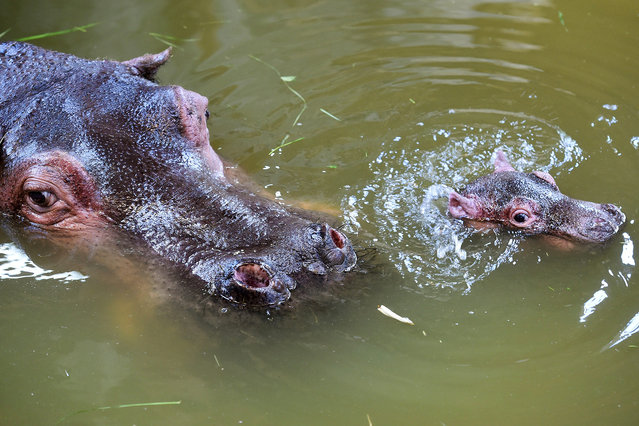 A baby hippopotamus swims next to his mother in the zoo of Karlruhe, Germany, 24 June 2015. The was baby born on 17 June 2015, the day that marks the opening of the 300th anniversary celebrations of Karlsruhe, will be named Karoline after Caroline of Baden or Karl Wilhelm after the founding father of the city, depending on its gender still currently unknown to the animal care attendants as they are not allowed to approach the baby animal. (Photo by Uli Deck/EPA) 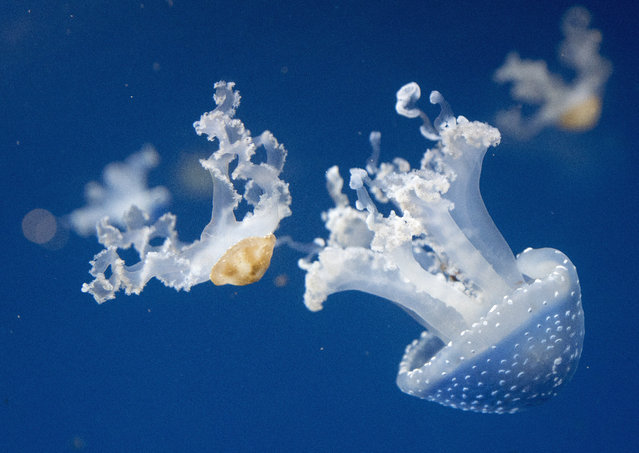 Jellyfish swim in a basin of the Haus Des Meeres building in Vienna, Austria on June 9, 2015. Haus Des Meeres, built during the World War II as one of the four Vienna’s anti aircraft gun and battle towers, hosts an Aqua-Terra Zoo where visitors also can get a view of the city from the 9th floor open air terrace. (Photo by Joe Klamar/AFP Photo) 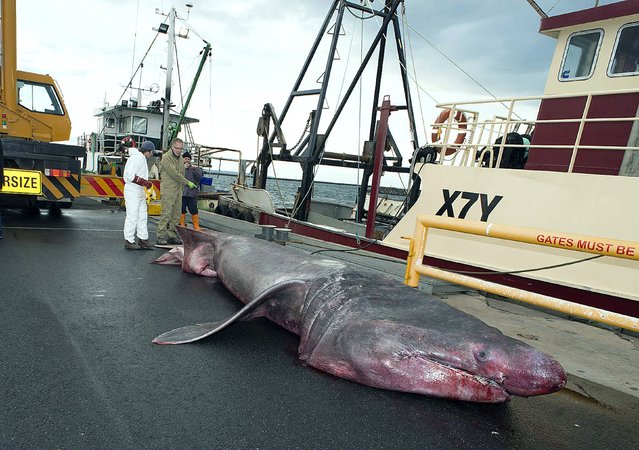 This picture taken on June 22, 2015 and released by the Museum Victoria on June 24, 2015 shows an official measuring a gaint basking shark that was accidentally picked up by a fishing trawler in the Bass Strait off the Australian mainland's most southeastern point. Fishermen off Australia who accidentally caught a whopping 6.3 metre basking shark have provided scientists with a rare opportunity to study the second-biggest fish on the planet. (Photo by Nicole Miller/AFP Photo/Museum Victoria) 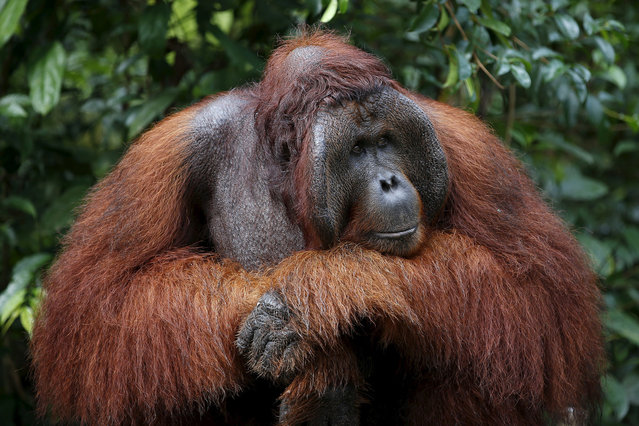 A male orangutan waits at a feeding station at Camp Leakey in Tanjung Puting National Park in Central Kalimantan province, Indonesia June 15, 2015. Deforestation is the primary threat to the orangutan, a species of great ape known for its intelligence. The United Nations predicts that orangutans will be virtually eliminated in the wild within two decades if current deforestation trends continue. (Photo by Darren Whiteside/Reuters)
Edit Del
29 Jun 2015 12:27:00, post received 0 comments
Publication archive:
←   →
Popular tags:
All tags
Last searches: