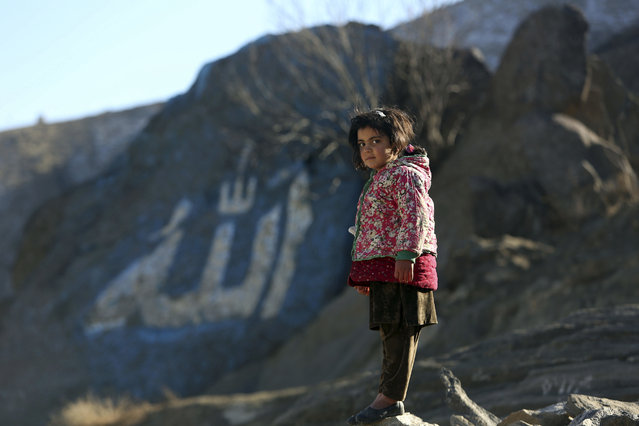 Zainab, 5, an Afghan girl, poses for photograph outside her home on the outskirts of Kabul, Afghanistan, Sunday, January 8, 2017. The Arabic word Allah, or God, is painted on a rock in the background. (Photo by Rahmat Gul/AP Photo) 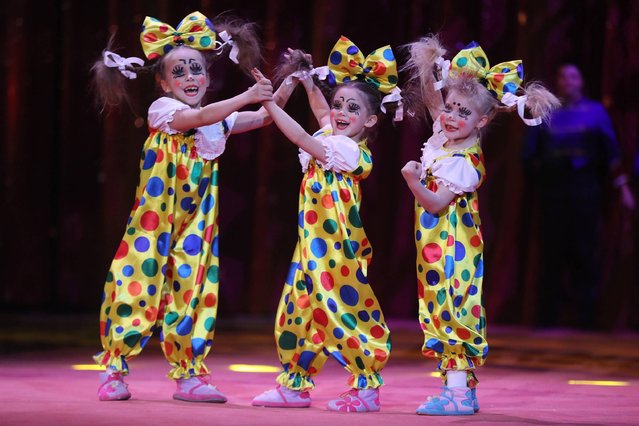 The Izhevsk trio performs during the opening of the 41st Monte-Carlo International Circus Festival in Monaco on January 19, 2017. (Photo by Valery Hache/AFP Photo) 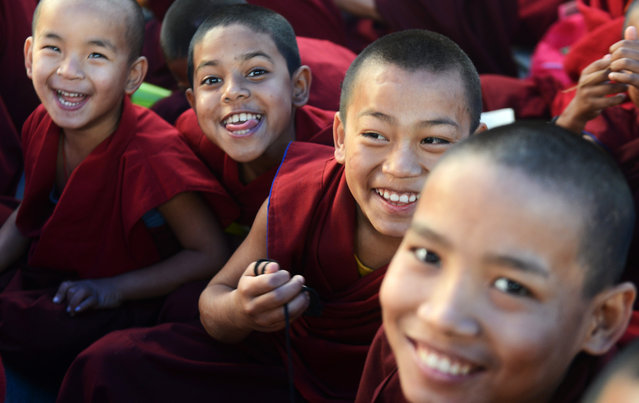 Young Buddhist monks participate in a special religious teaching prayer attended by the Tibetan spiritual leader, The Dalai Lama during the Kalachakra event at Bodhgaya on January 6, 2017. (Photo by Dibyangshu Sarkar/AFP Photo) 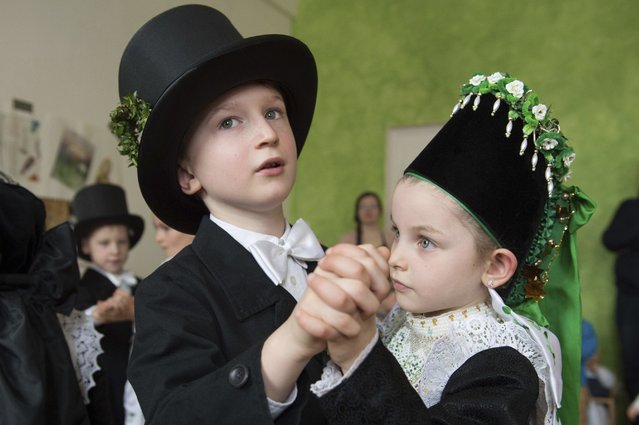 Children of the nursery “Ostro” wear traditional Sorbian wedding costumes on the occasion of the “Vogelhochzeit” (lit. “Bird Wedding”) festivity in Ostro, eastern Germany, Wednesday, Jan. 25, 2017. The Sorbs are a Slavic minority located near the German-Polish border (Photo by Sebastian Kahnert/DPA via AP Photo) 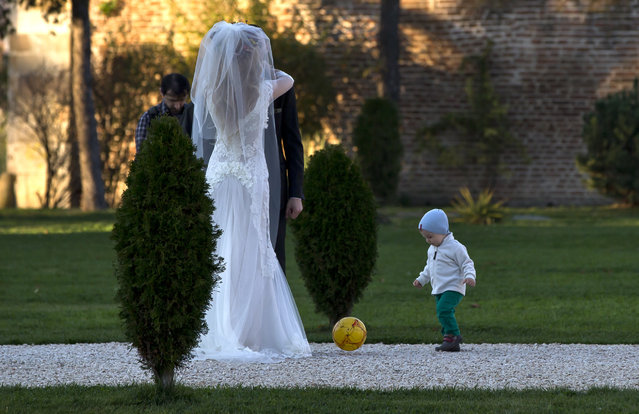 In this November 9, 2013 file photo, a child plays with a ball next to a couple posing for a photographer in a park outside Bucharest, Romania. (Photo by Vadim Ghirda/AP Photo) 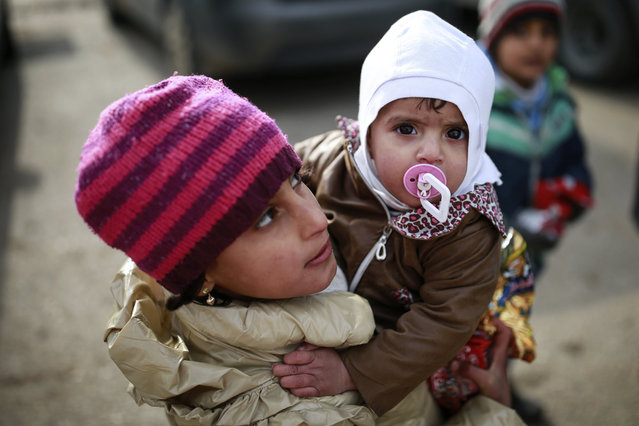 Syrian children wait for other members of their family after they crossed into Turkey at the Cilvegozu border gate with Syria, near Hatay, southeastern Turkey, Saturday, December 17, 2016. It was not immediately clear where in Syria most people that crossed into Turkey were coming from but one woman said several people were able to leave the embattled Syrian city of Aleppo.The Aleppo evacuation was suspended Friday after a report of shooting at a crossing point into the enclave by both sides of the conflict. (Photo by Emrah Gurel/AP Photo) 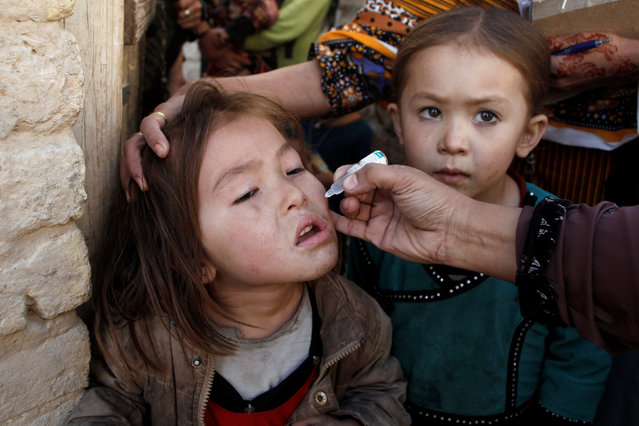 A girl receives polio vaccine drops from an anti-polio vaccination worker outside her family home in Quetta, Pakistan January 2, 2017. (Photo by Naseer Ahmed/Reuters) 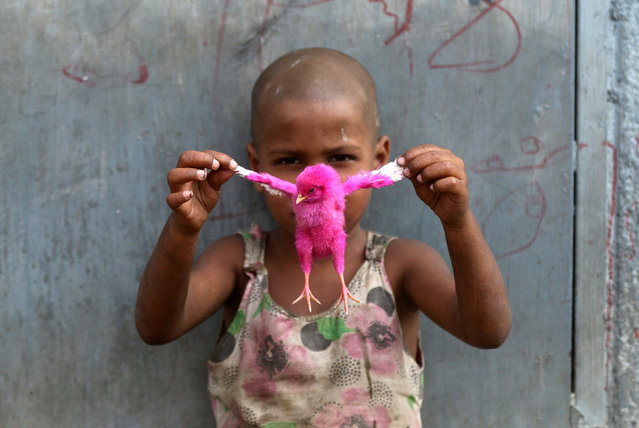 Ashima, 7, plays with her pet chick in a slum in Mumbai, India, January 2, 2017. (Photo by Shailesh Andrade/Reuters) 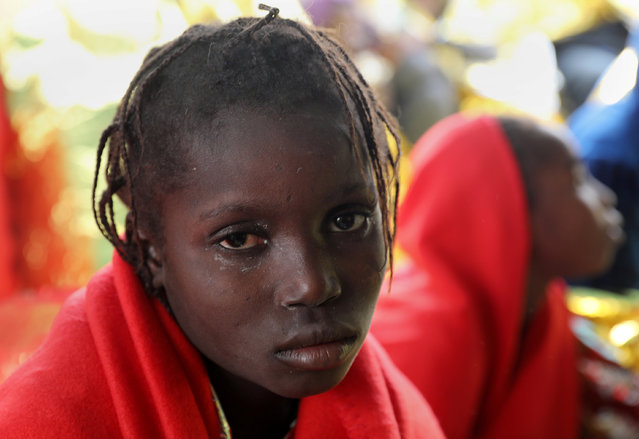 A migrant child is seen after she was rescued from an overcrowded raft, as lifeguards from the Spanish NGO Proactiva Open Arms rescue all 112 on aboard, including two pregnant women and five children, as it drifts out of control in the central Mediterranean Sea, some 36 nautical miles off the Libyan coast January 2, 2017. (Photo by Yannis Behrakis/Reuters) 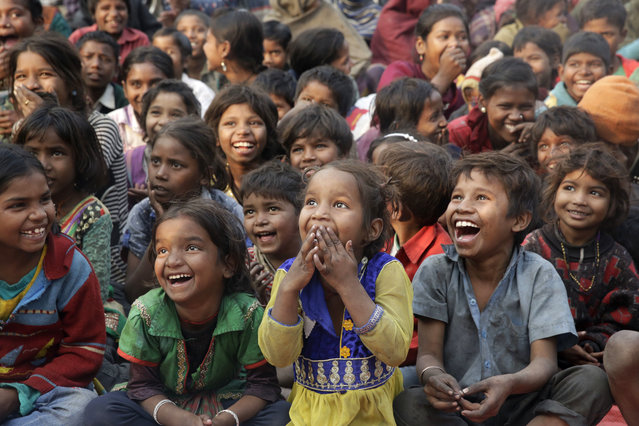 Impoverished Indian children watch a performance as part of advocacy against child labor in Allahabad, India, Tuesday, January 17, 2017. Despite the country's rapid economic growth, child labor remains widespread in India, where an estimated 13 million children work, with laws meant to keep kids in school and out of the workplace routinely flouted. (Photo by Rajesh Kumar Singh/AP Photo) 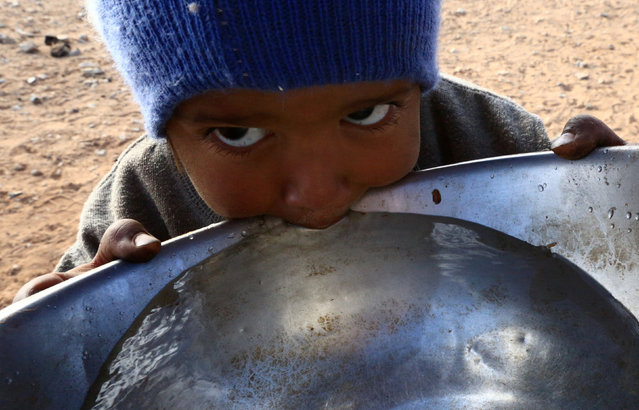 A stateless Arab boy from an ethnic group known as Bedoon, who are believed to be descendants of nomadic Bedouins, drinks water from a pot in a desert west of Al-Jawf region, Saudi Arabia, December 31, 2016. (Photo by Mohamed Al Hwaity/Reuters) 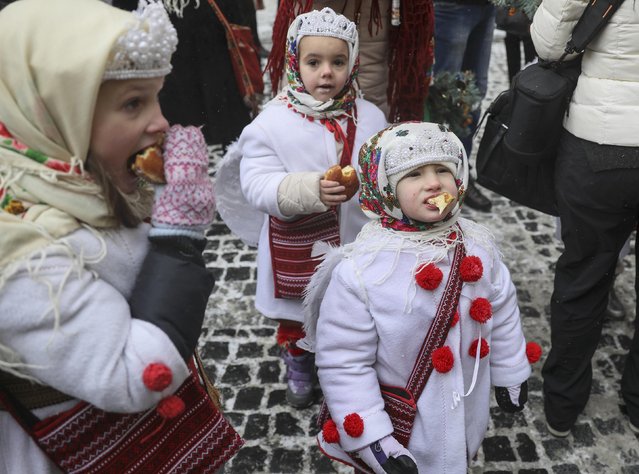 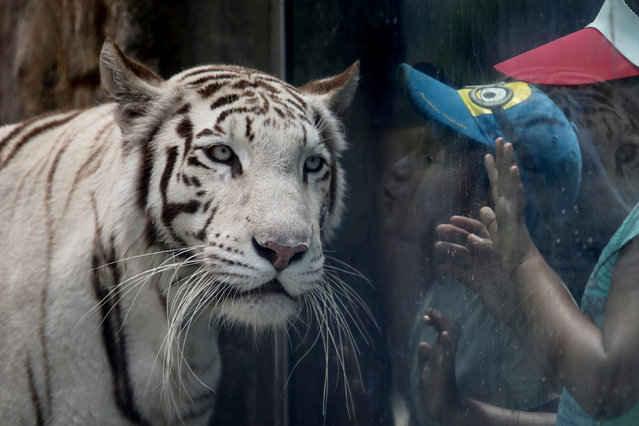 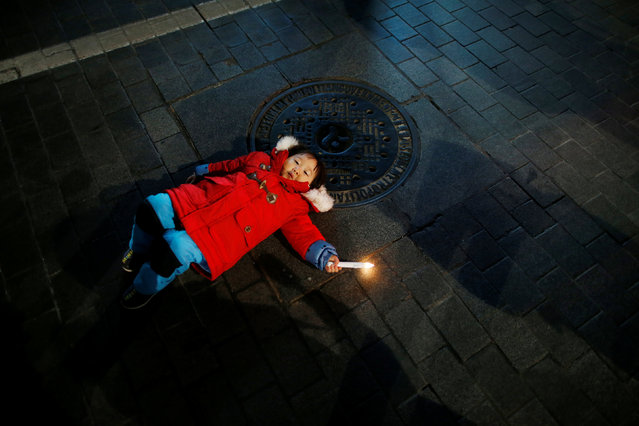 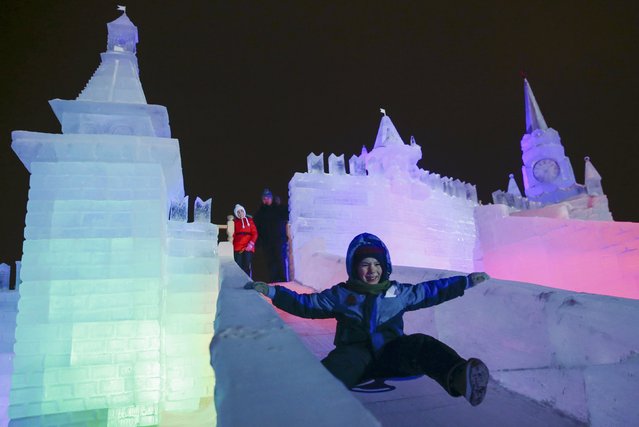 A boy slides down an ice slope at the Poklonnaya Gora War Memorial Park in Moscow, Russia January 10, 2017. (Photo by Maxim Shemetov/Reuters) 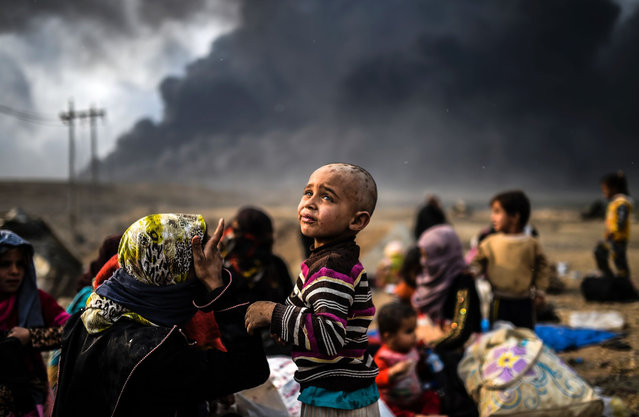 Iraqi families who were displaced by the ongoing operation by Iraqi forces against jihadistds of the Islamic State group to retake the city of Mosul, are seen gathering on an area near Qayyarah on October 24, 2016. The UN refugee agency is preparing to receive 150,000 Iraqis fleeing fighting around the Islamic State group-held city of Mosul within the next few days, its chief said. (Photo by Bulent Kilic/AFP Photo) 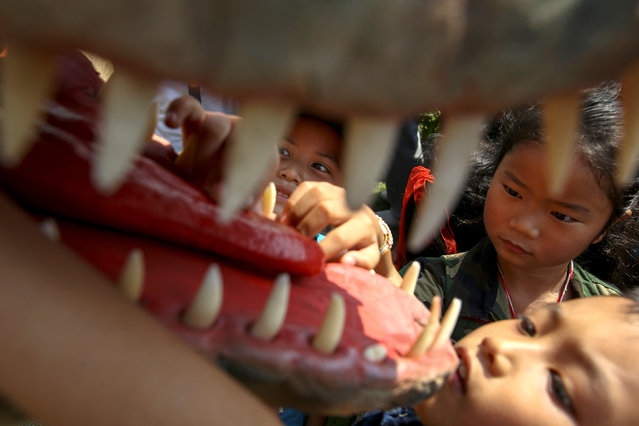 Children play with a dinosaur statue during the Children's Day celebration at Government House in Bangkok, Thailand, January 14, 2017. (Photo by Athit Perawongmetha/Reuters) 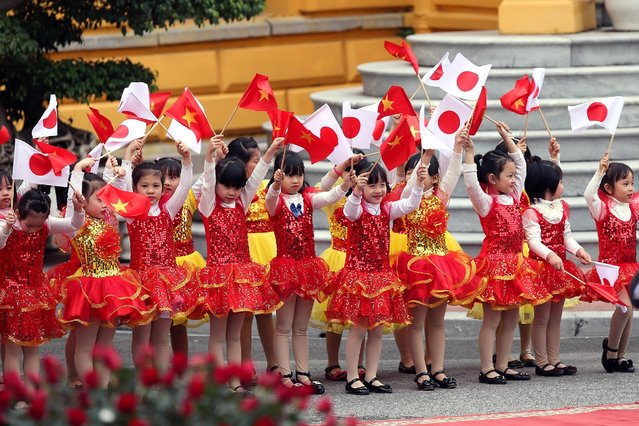 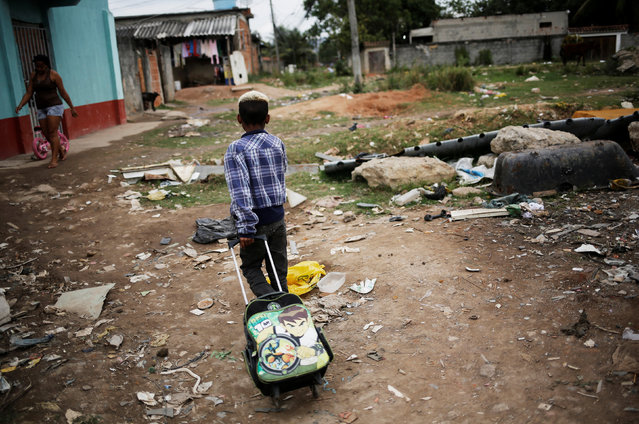 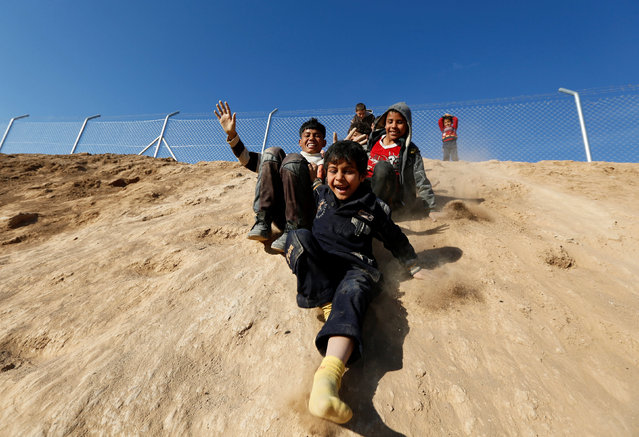 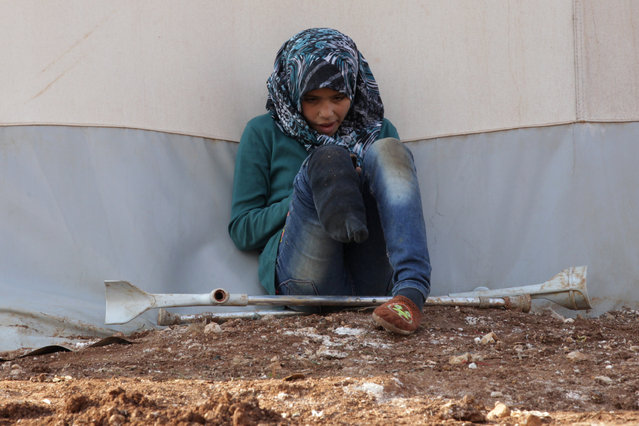 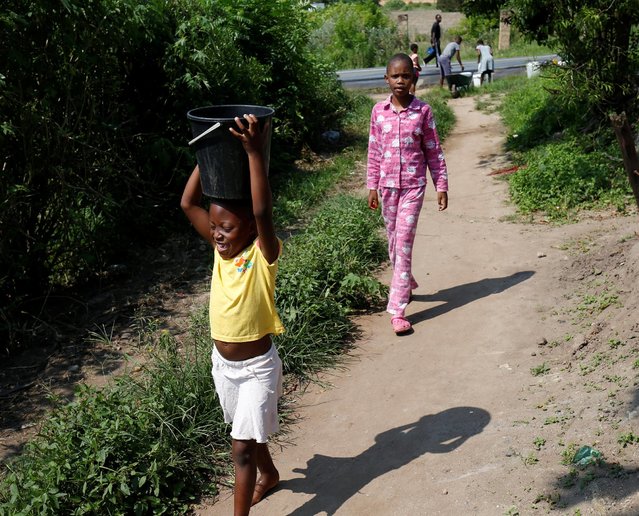 Residents of Ntuzuma collect water from a truck after cuts in water supply were made due to persistent drought conditions, Durban, South Africa, January 22, 2017. (Photo by Rogan Ward/Reuters) 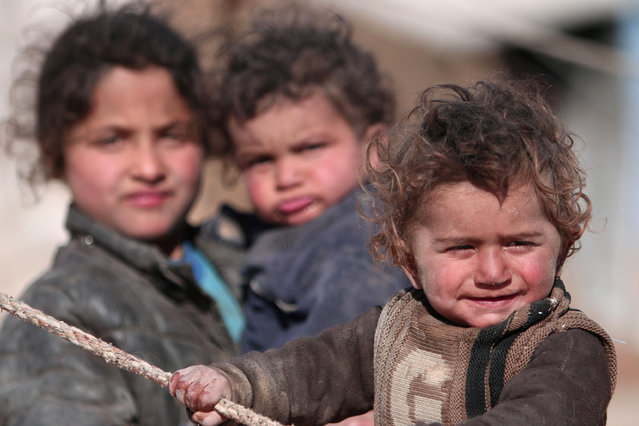 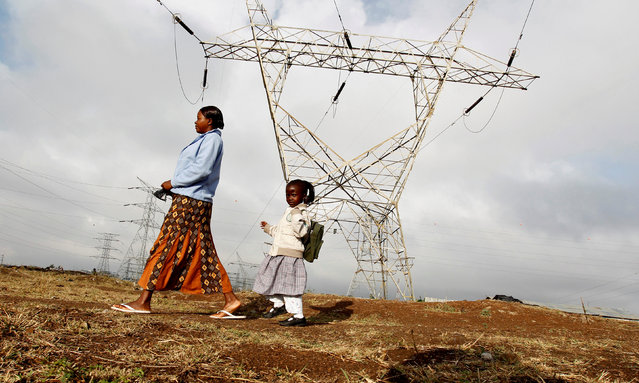 A woman walks her child to school past high voltage electrical pylons on the outskirts of Kenya's capital Nairobi, March 14, 2011. (Photo by Thomas Mukoya/Reuters) 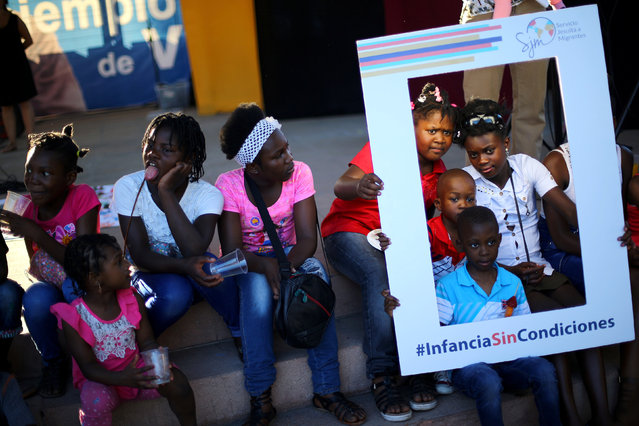 Haitian immigrant children hold a banner that reads “Childhood without conditions”, at a church in Santiago, Chile, December 18, 2016. (Photo by Ivan Alvarado/Reuters) 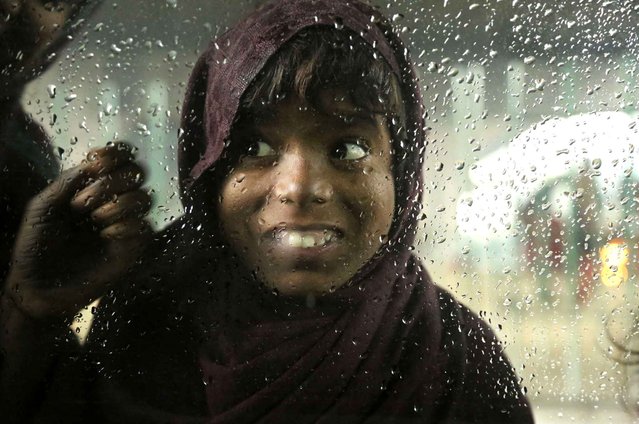 A homeless street child looks in the window of a car in Jammu, India, Friday, January 6, 2017. Some 800 million people in the country live in poverty, many of them migrating to big cities in search of a livelihood and often ending up on the streets. (Photo by Channi Anand/AP Photo) 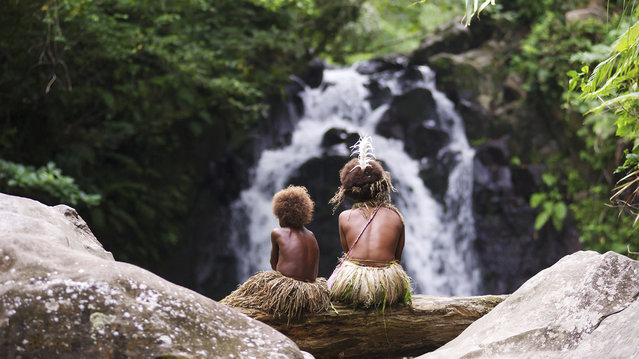