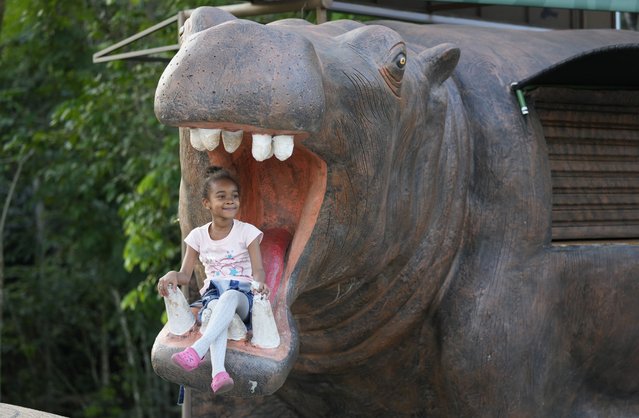 A girl poses for a photo on a statue of a hippo at the entrance of Hacienda Napoles, that was once the private zoo with illegally imported hippos and other animals that belonged to the late drug lord Pablo Escobar, in Puerto Triunfo, Colombia, Tuesday, February 15, 2022. Colombia's Environment Ministry announced in early Feb. that the hippos are an invasive species, in response to a lawsuit against the government over whether to kill or sterilize the hippos, and whose numbers are growing at a fast pace and pose a threat to biodiversity. (Photo by Fernando Vergara/AP Photo) 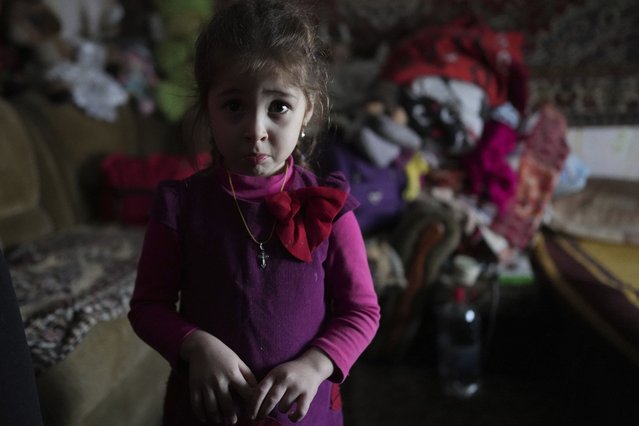 Sofia, 4, looks at a photographer inside a house where she lives with her parents and family members, after alleged shelling by separatists forces in Novognativka, eastern Ukraine, Sunday, February 20, 2022. Russia is extending military drills near Ukraine's northern borders after two days of sustained shelling along the contact line between Ukrainian soldiers and Russia-backed separatists in eastern Ukraine. The exercises in Belarus, which borders Ukraine to the north, originally were set to end on Sunday. (Photo by Evgeniy Maloletka/AP Photo) 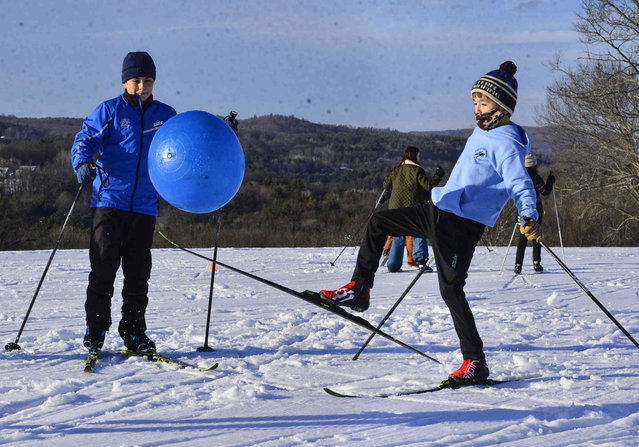 Spencer Jones, 11, a member of the Putney Ski Club, uses his skis to kick around a ball as a warm-up before going out on the trails at The Putney School in Putney, Vt., on Wednesday, February 2, 2022. (Photo by Kristopher Radder/The Brattleboro Reformer via AP Photo) 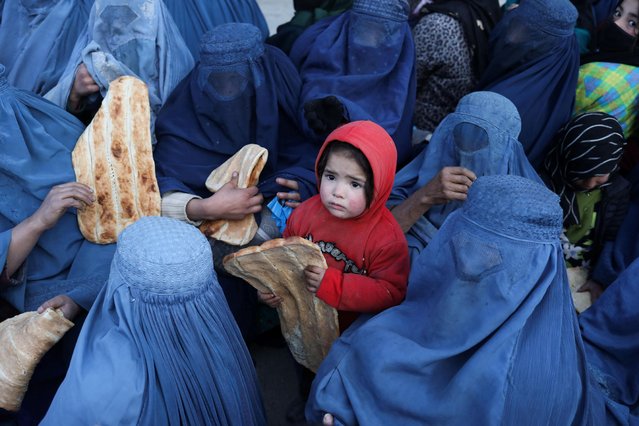 An Afghan child holds bread in front of a bakery in Kabul, Afghanistan, January 31, 2022. (Photo by Ali Khara/Reuters) 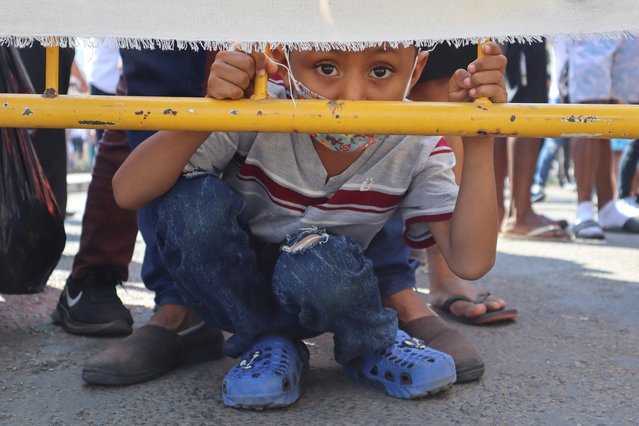 A child peers behind a fence as he waits along his mother and other migrants outside the office of the National Migration Institute (INM) for a QR code to register their migratory situation and travel throughout the country, in Tapachula, Mexico, February 2, 2022. (Photo by Jose Torres/Reuters) 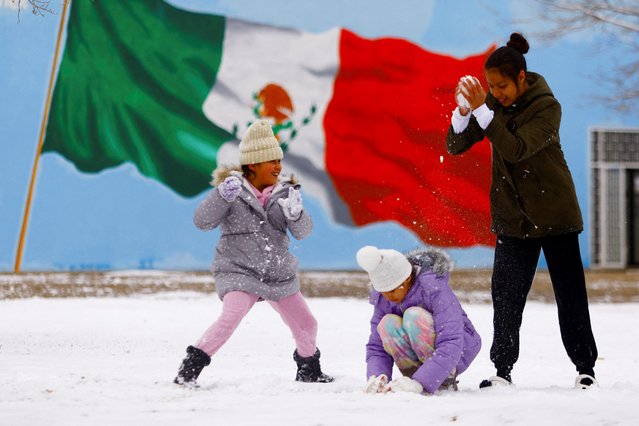 Children play in the snow after a winter storm in Ciudad Juarez, Mexico on February 3, 2022. (Photo by Jose Luis Gonzalez/Reuters) 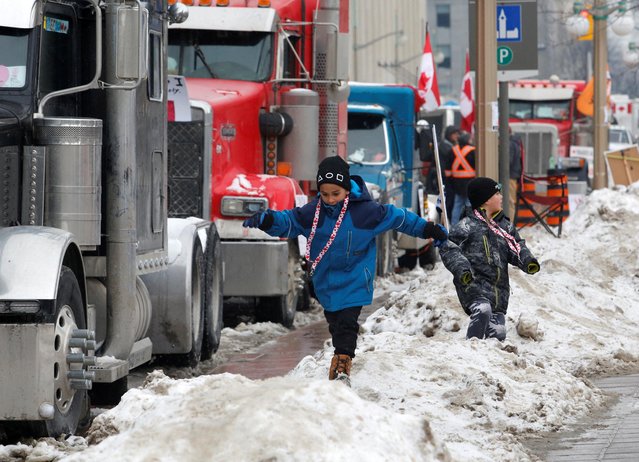 Children play on snow banks as truckers and their supporters continue to protest against the coronavirus disease (COVID-19) vaccine mandates, in Ottawa, Ontario, Canada, February 8, 2022. (Photo by Patrick Doyle/Reuters) 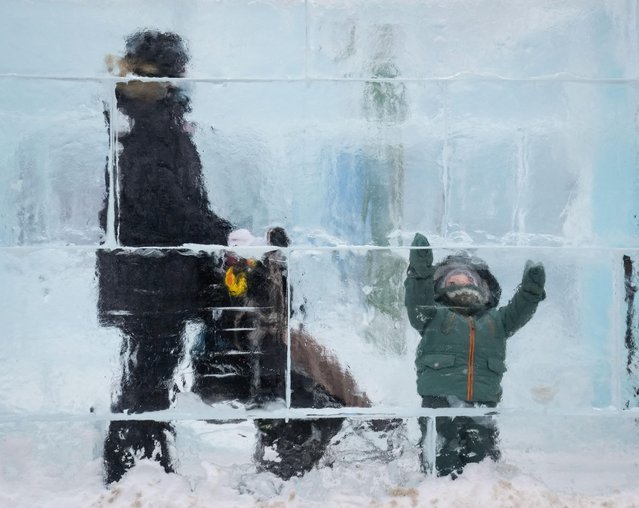 A kid looks at the walls of the Ice Castle during the Winter Carnival in Quebec City, Quebec, Canada on February 6, 2022. (Photo by Mathieu Belanger/Reuters) 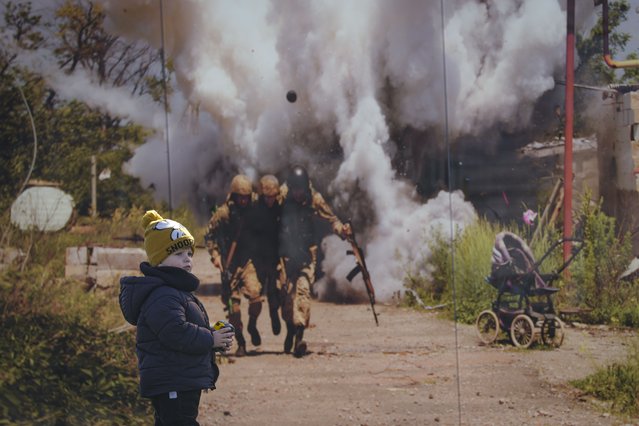 A child stops by a large print at a photographic memorial for those killed in the confrontation between Ukraine's military and the pro-Russia separatist forces in Sievierodonetsk, Luhansk region, eastern Ukraine, Wednesday, February 23, 2022. Ukraine urged its citizens to leave Russia, and Europe braced for further confrontation Wednesday after tensions escalated dramatically when Russia's leader received authorization to use military force outside his country and the West responded with a raft of sanctions. (Photo by Vadim Ghirda/AP Photo) 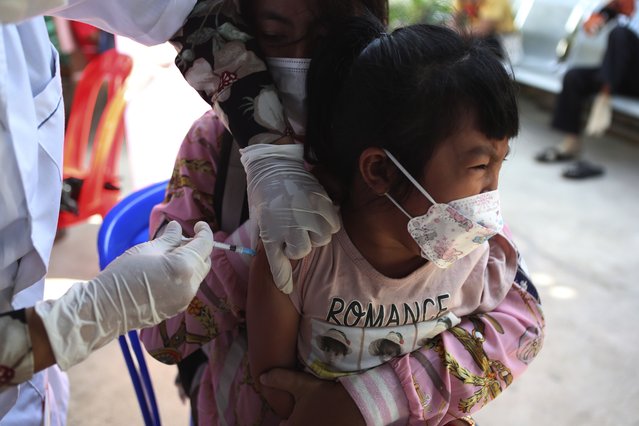 A young girl held by her mother reacts as she receives a first dose of Sinovac's COVID-19 vaccine at a health center outside Phnom Penh, Cambodia, Wednesday, February 23, 2022. Cambodia began vaccinating 3- and 4-year-olds with Chinese-made Sinovac shots Wednesday after finding young children accounting for many new infections. Prime Minister Hun Sen appealed for parents to get their children vaccinated as soon as they can. (Photo by Heng Sinith/AP Photo) 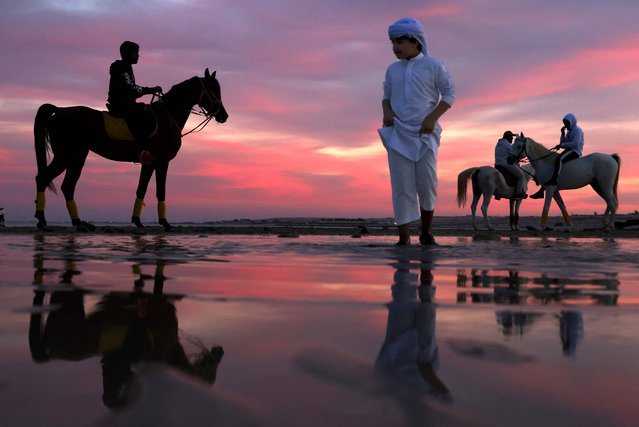 Emiratis ride their horses during sunset in Abu Dhabi on February 8, 2022. (Photo by Karim Sahib/AFP Photo) 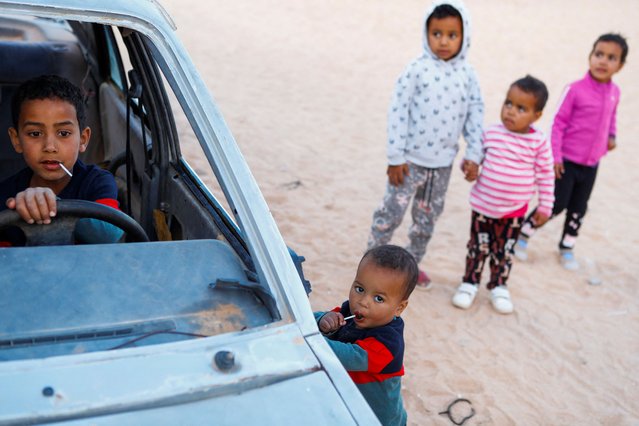 Sahrawi children play in an old car on a street in the Smara refugee camp in Tindouf, Algeria, February 18, 2022. (Photo by Borja Suarez/Reuters) 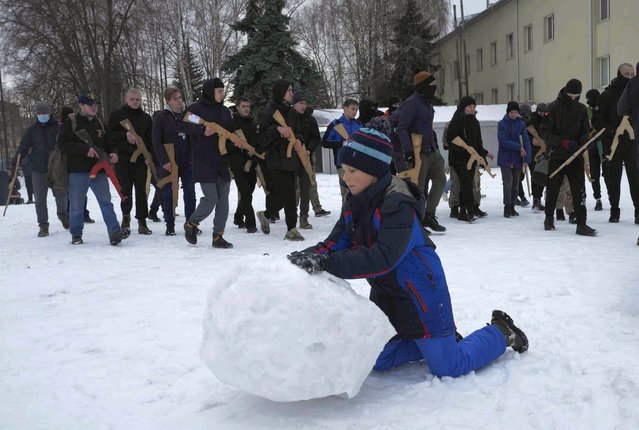 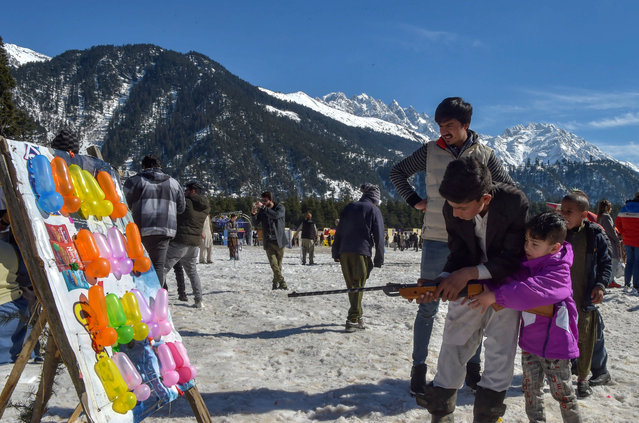 Children pop balloons with air-gun before the start of the Winter Snow Sports Festival in Kalam, about 99 km from Mingora in the northern upper reaches of Swat valley on February 12, 2022. (Photo by Abdul Majeed/AFP Photo) 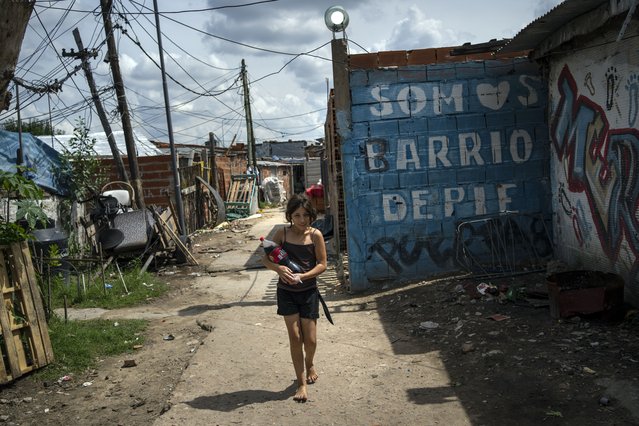 A girl carries a soft drink bottle through the Puerta 8 suburb north of Buenos Aires, Argentina, where police say contaminated cocaine may have been sold, Friday, February 4, 2022. A batch of cocaine has killed at least 23 people and hospitalized many more in Argentina, according to police. (Photo by Rodrigo Abd/AP Photo) 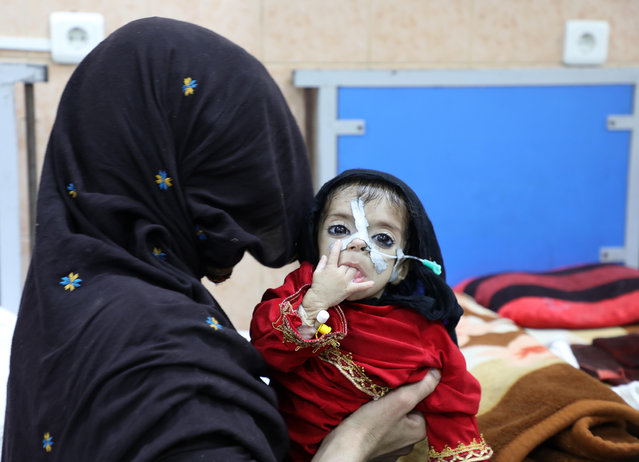 Afghan child suffering from malnutrition is seen at a hosptail in Kabul, Afghanistan on January 16, 2022. In Afghanistan, children cannot stand on their feet despite their age; the reason is simply hunger. Rates of malnutrition are soaring in the country. Children suffering from malnutrition, which is defined as the constant lack of nutritional elements needed by the human body, are deprived of their primary source of nutrition for newborns, breast milk. Mothers who do not even have access to vital basic foods are weaned in a short time. The lack of necessary food supplements causes a visible slowdown in development in newborns and children. (Photo by Sayed Khodaiberdi Sadat/Anadolu Agency via Getty Images) 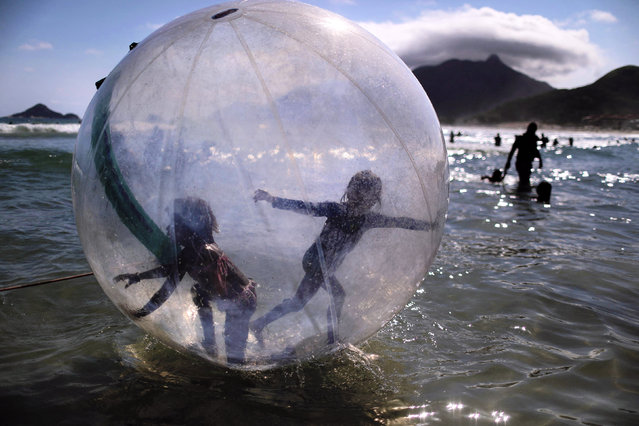 Children try to balance inside a ball at the Macumba beach in Rio de Janeiro, Brazil on February 13, 2022. (Photo by Pilar Olivares/Reuters) 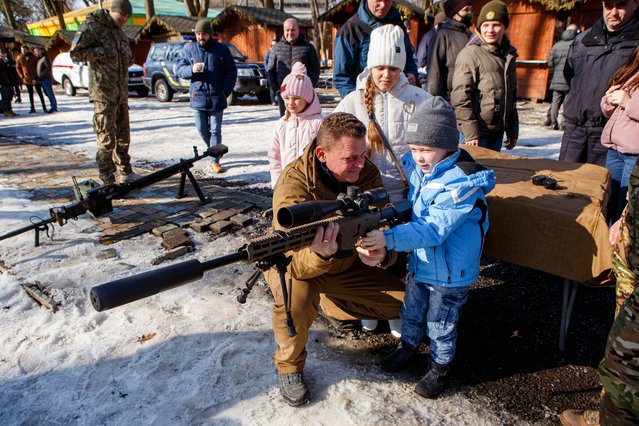 A participant of an open civil defence exercise shows a rifle to a boy, Uzhhorod, western Ukraine on February 13, 2022. (Photo by Serhii Hudak/Ukrinform/Future Publishing via Getty Images) 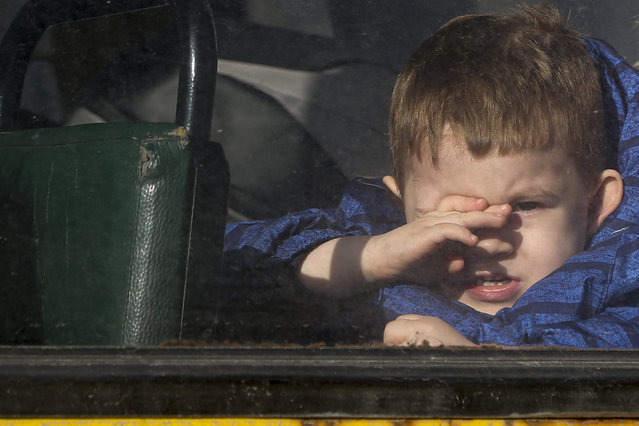 A boy looks through a bus window, waiting to be evacuated to Russia, in Donetsk, the territory controlled by pro-Russian militants, eastern Ukraine, Saturday, February 19, 2022. On Friday, separatist authorities in eastern Ukraine announced a mass evacuation of women, children and older adults to neighboring Russia. The moves have have fueled Western fears that Moscow could use the latest violence in eastern Ukraine as a pretext for an invasion. (Photo by Alexei Alexandrov/AP Photo) 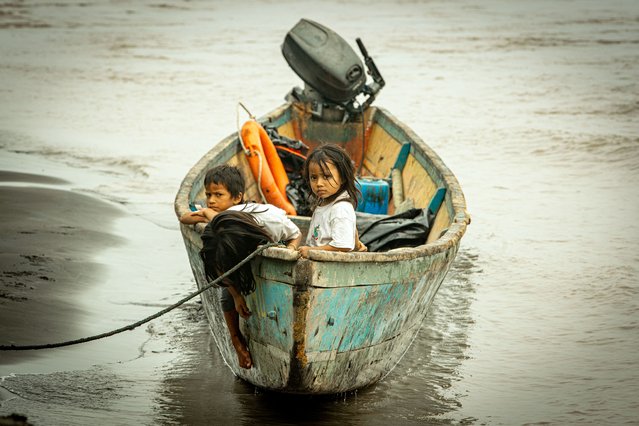 Children remain on a boat, after crude reached the Coca river due to an oil spill, in Puerto Maderos, Sucumbios province, Ecuador, on February 1, 2022. An oil spill caused by a ruptured pipeline in Ecuador's Amazon region leaked almost 6,300 barrels into an environmental reserve, according to information provided Wednesday by the company that owns the conduit. (Photo by Cristina Vega Rhor/AFP Photo)
Edit Del
11 Mar 2022 05:49:00, post received 0 comments
Publication archive:
←   →
Popular tags:
All tags
Last searches: